Crystal Palace’s improved performance under Patrick Vieira was underlined by their well-thought out display against Arsenal. The team achieved a surprising 3-0 win over Mikel Arteta’s side and managed to handle their dominance and control the game with a smart movement.

Palace didn’t allow them to get an advantage in the top-four battle and put Arsenal’s consistency under question as the team failed to respond to Vieira’s tactics. The Londoners’ inefficient attacking movement and broken defence resulted in their defeat at a critical point of the season.

The Eagles’ patience paid off and managed to take advantage of their chances. While they would give away the possession and have fewer opportunities in front of the goal, they were efficient enough and 100% of their efforts were on target, resulting in three goals out of five shots.

Arsenal were unusually disorganised both in and out of possession resulting in inaccurate passing and wrongly timed interventions. Arteta attempted to change his tactics in-game with a few positional changes and while it increased the dynamics in possession the accuracy of their actions still wasn’t enough to fight back.

In this tactical analysis, we examine how Crystal Palace managed to limit their opponents’ movement and what didn’t work out in Arsenal’s tactics.

Patrick Vieira set the team up in a 4-2-3-1 with Vicente Guaita on the goal and Tyrick Mitchell, Marc Guéhi, Joachim Andersen and Nathaniel Clyne in defence. Jeffrey Schlupp and Cheikhou Kouyaté were employed in central midfield, although they contributed actively in the wide areas. Wilfried Zaha and Jordan Ayew flanged Jean-Philippe Mateta, who had the support of Conor Gallagher from behind.

With the two goals advantage from the first half, the manager decided to focus on the team’s defensive actions and replaced Mateta with the defender James McArthur in the 69th minute as Arsenal became more active on the ball after Arteta making a couple of changes.

Arsenal started in a 4-2-3-1- as well, with Aaron Ramsdale covering the goal, being supported by Nuno Tavares, Gabriel Magalhães, Ben White and Cédric Soares in defence. Granit Xhaka and Thomas Partey covered the central areas with Martin Ødegaard in front of them. Emile Smith Rowe and Bukayo Saka supported Alexandre Lacazette in attack.

After being inefficient in attack in the first half and having difficulties in ball progression Arteta was forced to do some changes. Being 2-0 down on the break resulted in the manager committing more players in attack and switching to a 4-3-3. He replaced Tavares with Gabriel Martinelli and had Xhaka move into the left-back position.

Later on, Eddie Nketiah replaced Soares which resulted in a complete exchange of positions and a switch to a 3-5-2 formation. Saka and Martinelli switched sides, Xhaka remained part of the three-man defence and Nketiah joined Lacazette at the top of the attack.

These changes increased the dynamics and Arsenal were able to have more of the ball in the opposition half, while Palace dropped back to defend.

The Gunners were still struggling in transitions mainly due to Partey’s poor performance and inaccurate actions. The former Atletico Madrid player got injured in the 74th minute, which forced Arteta to introduce Sambi Lokonga.

That’s when the team settled in possession and started to threaten the Eagles’ goal. Lokonga brought some confidence and along with the other substitution Nketiah increased the team’s chances to score.

However, having 84% of the possession at some point was not a sign of Arsenal’s dominance, but rather of Palace’s smart tactics and plan to purposedly give away the initiative.

Palace had the right approach from the beginning. They would very smartly try to manipulate Arsenal’s movement in possession through their positioning and press. While the team weren’t very aggressive in their pressing actions, they would constantly move and block the passing lanes and trouble the Londoners’ build-up.

Their movement and positioning stopped the Arsenal players’ efforts to employ their one-touch football and they were forced into hasty passes and mistakes in direct challenges. Vieira’s side started pressing more in the midfield which resulted in their opponents frequently losing possession in the central areas. 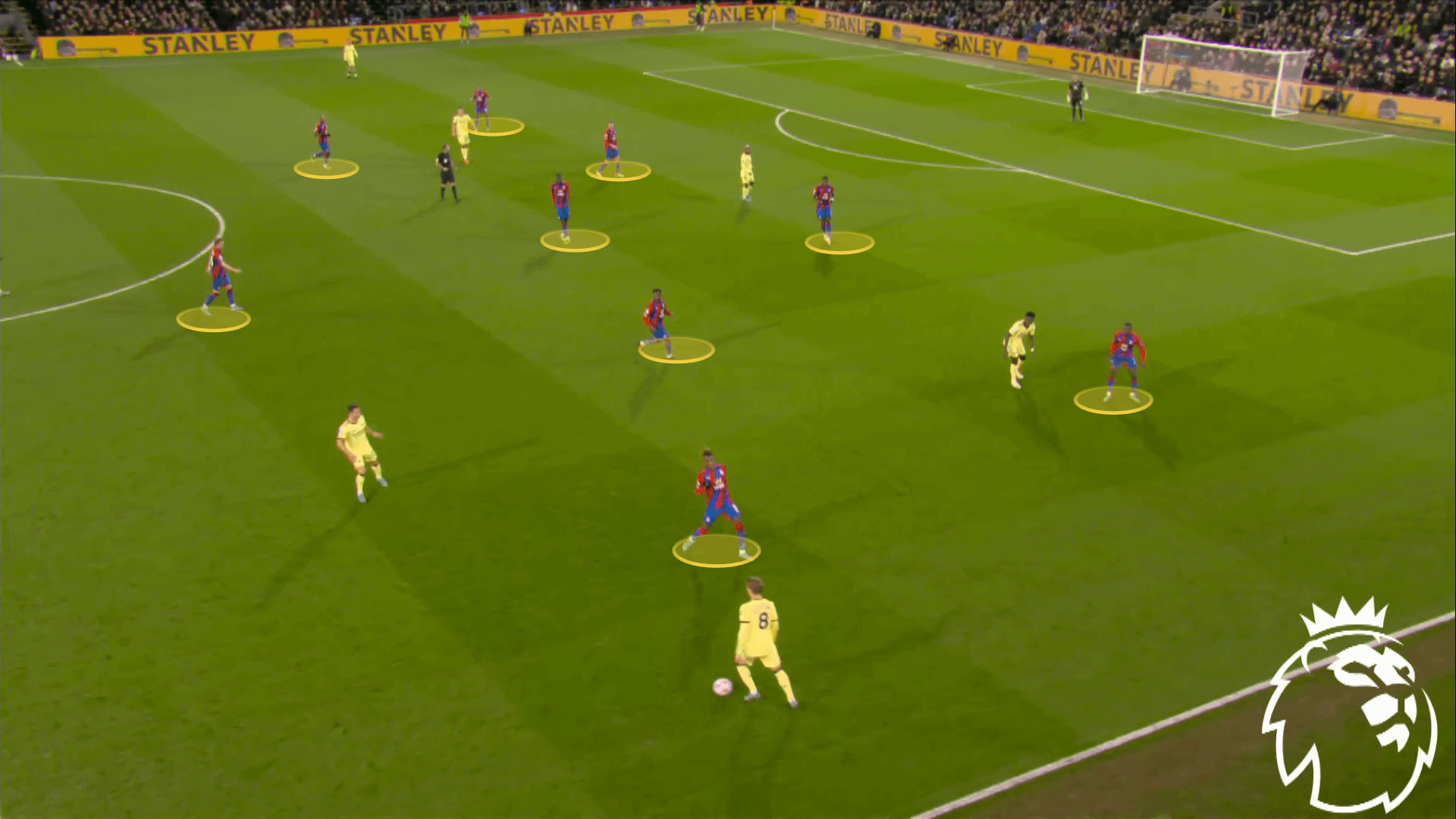 This forced the Gunners to switch play but Palace’s defensive discipline showed again and they quickly managed to transition, forcing Arsenal to send the ball back. 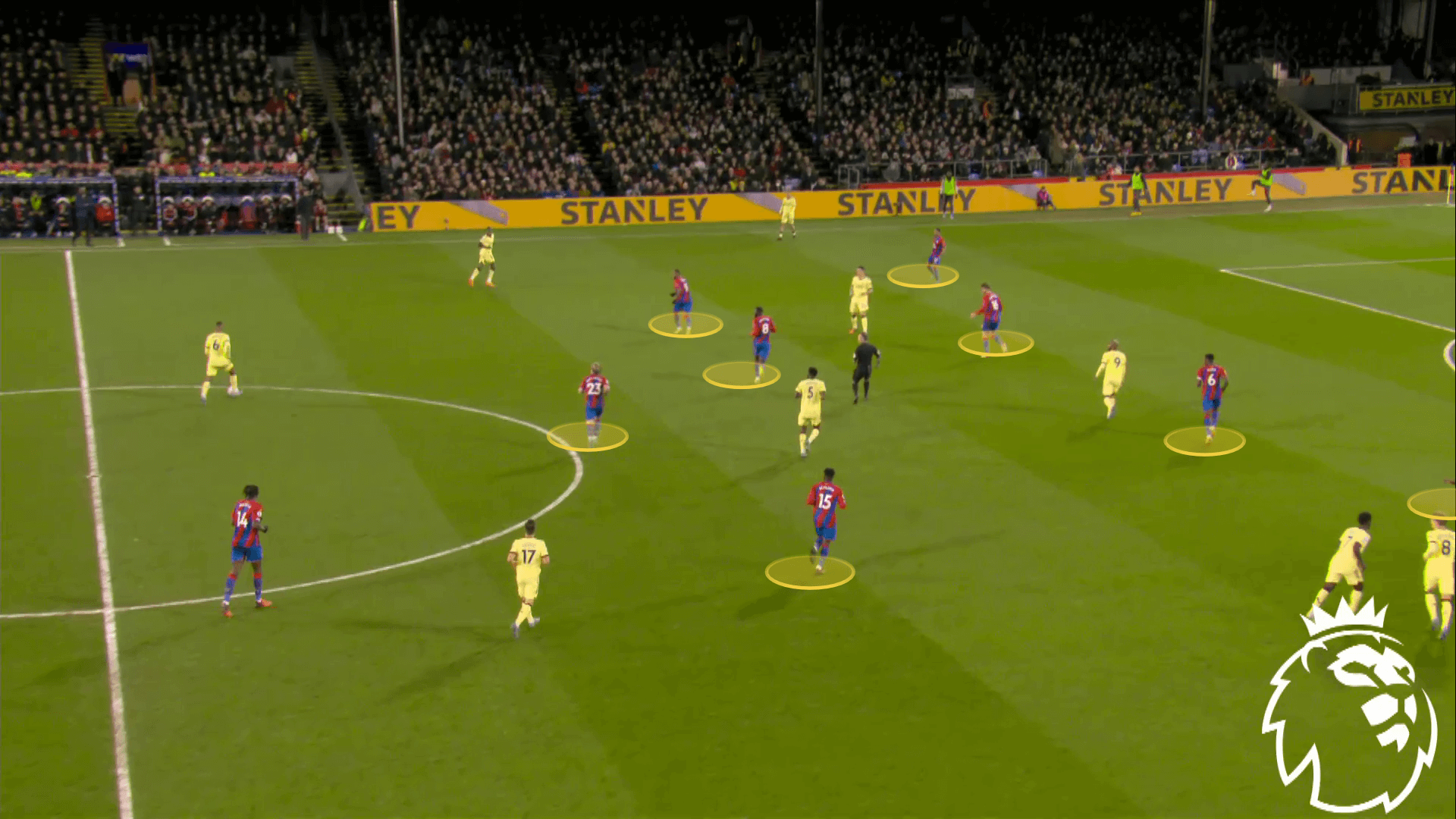 Their positioning got Arsenal stuck in midfield which was the perfect moment for Palace to press and recover the ball.The Eagles recovered the ball 28 times in midfield and tried to take advantage of these opportunities. Arsenal only managed to reach the goal and shoot three times in the first half which was a result of the oppositions’ efforts. The team slowly increased their press, which immediately allowed them to create some chances and threaten Arsenal’s goal.

Their smart positioning resulted in Arsenal’s inaccurate passing and their pass completion rate dropped to 83.52% in the first half, which was one of the reasons for the Gunners’ inability to create quality chances. Partey’s poor positioning and actions also affected the team in attack, as combined with Palace’s movement Saka and Lacazette were often left isolated. The only way Arsenal were able to progress the ball was through Xhaka-Smith-Rowe combinations.

What was Vieira’s plan in attack?

Crystal Palace weren’t overcommitted to their attacking actions. They chose a balanced approach and relied on patiently waiting for the right opportunities to arise, rather than constantly pushing forward and risking getting exposed defensively.

Most of Palace’s build-up efforts would go through the left side, where Guéhi, Mitchell, Schlupp and Zaha would constantly combine. The team tried to take advantage of Partey’s poor defensive performance and also to expose Soares on speed, although they would also occasionally switch to the other side and try to set Ayew up. It is exactly on the flanks where Arsenal lost the most defensive duels throughout the game and the Palace players made sure to take advantage of their vulnerability.

They didn’t manage to create many chances, though, as Arsenal’s defence would focus on recovering the ball on the edge of their defensive third, where Gabriel would often step up and cover depth for his teammates.

It was difficult for the team to reach the final third and occupy the box with Zaha winning only six out of his 26 offensive duels and failing to create any quality opportunities. Their success in attack came from the accuracy of their actions in front of the goal as they didn’t take their chances for granted. All five of their shots actually ended up on target which turned out absolutely enough.

The way the players were moving in possession engaged their opponents into pressing and leaving out spaces in behind, which Palace could exploit. They wouldn’t rely on crossing but instead would focus on strong positioning, runs off the ball and long balls. The lack of accuracy of Arsenal’s back passes would also trigger their opponents to attack.

Arsenal’s shortage of players in certain positions was underlined in the game against Palace. With Kieran Tierney being ruled out until the end of the season, Takehiro Tomiyasu being absent since January and now Partey getting injured, the team’s squad depth problems deepen seriously. The concern that Tavares and Soares are not able to provide long-term quality replacements in the left and right back positions get even bigger, especially after Tavares’ poor display against the Eagles. The 22-year-old failed to provide the needed explosiveness in possession but also had some struggles defensively, which allowed Vieira’s side to expose the flanks.

Partey’s injury at this point of the season is a huge blow for the team, as he is one of the best performers this campaign but Lokonga’s display increases the hopes that he could secure the midfield position well, until Partey’s return. The Belgian player hadn’t played in a single game since January and didn’t waste his opportunity to show that he deserves a spot in the team by providing the needed stability in and out of possession.

Yet, the biggest problem for Arsenal remains the lack of a centre-forward who can step up and occupy the box to convert the team’s chances into goals. The lack of a player with strong finishing and the ability to exploit spaces is taking a toll on their performance. The team managed to create 13 chances against Crystal Palace but only three of their shots were accurate. Despite the creative bursts that the team occasionally get in the final third it is difficult for them to convert their chances into goals. They also rarely can rely on creating chances through crossing due to the lack of a natural striker who occupies the box and brings explosiveness.

Arsenal missed the perfect opportunity to gain an advantage in the top-four battle against Tottenham, West Ham and Manchester United. Crystal Palace, on the other side, showed a huge improvement and moved up the table remaining unbeaten in seven consecutive games in all competitions. As our analysis showed, their smart approach off the ball and measured actions on it, allowed them to grab the three points and make everyone doubt the Gunners’ consistency.