Entering game week 6, we saw West Ham United take on Manchester City at the London Stadium. Coming off an impressive 3-3 draw against Tottenham Hotspur last week, West Ham have been in a good vein of form having beaten Wolves and Leicester City emphatically in their last two English Premier League matches before a dramatic comeback against Tottenham Hotspur. Manchester City, meanwhile, have had a less than impressive start to the season with wins over Arsenal and Wolves, but a heavy loss to Leicester City and a draw to Leeds United to start their season. This game against West Ham proved decisive.

This tactical analysis will go into the tactics in Manchester City’s draw with West Ham and the details that led them to yet another unexpected result. 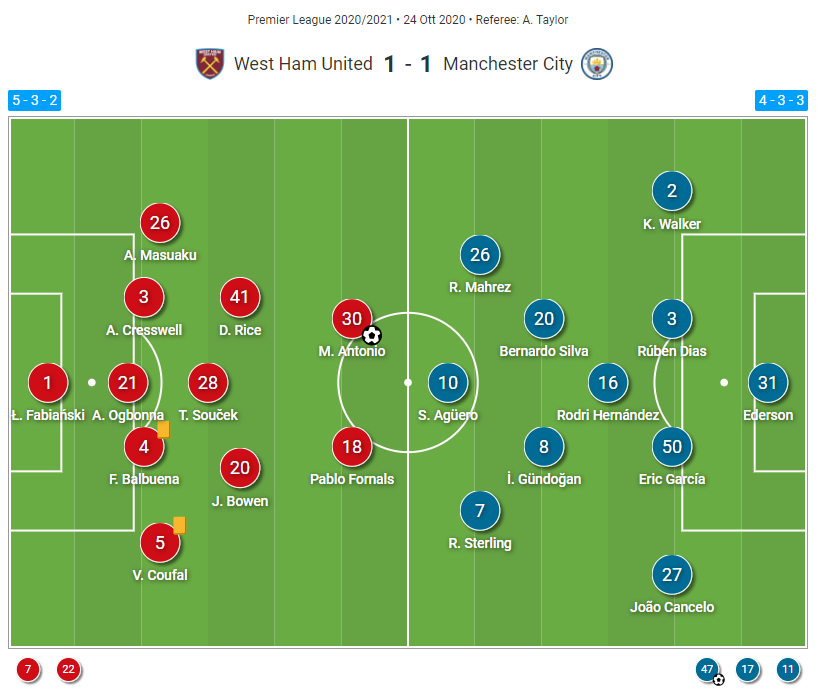 David Moyes started with the same team that drew to Spurs last week, giving his troops another go against a top-class side. The five-at-the-back formation that served him well was persisted with to try and contain Manchester City’s attacking talent.

Manchester City came into the game with a change in formation, reverting back to a 4-3-3 after using a 3-1-4-2 last week. İlkay Gündoğan replaced Phil Foden while Eric Garcia came in for new signing Nathan Ake in central defence.

For Manchester City, their attacking strategy was a little more methodical and thought out considering they were facing a team that would sit back and counter-attack. Coming up against a compact block meant their diminutive and quick attackers needed to create space as they weren’t going to be afforded much in the final third. Most of City’s forwards prefer to attack the central areas, meaning West Ham needed to keep this area confined. The type of personnel deployed in the wide areas meant City were always going to favour the central areas given their full-backs usually play more inverted.

If we look at the average position map of both teams, you can see Manchester City (right) are much more centrally focused, especially Riyad Mahrez (#26) and Raheem Sterling (#7) who both preferred to come on to their stronger foot. On the other hand, West Ham United (left) compacted the central areas and even though Pablo Fornals (#18) was played as Michail Antonio’s strike partner, he quickly moved into midfield alongside Tomáš Souček (#28) and Declan Rice (#41) to stop their dominance and central passing. 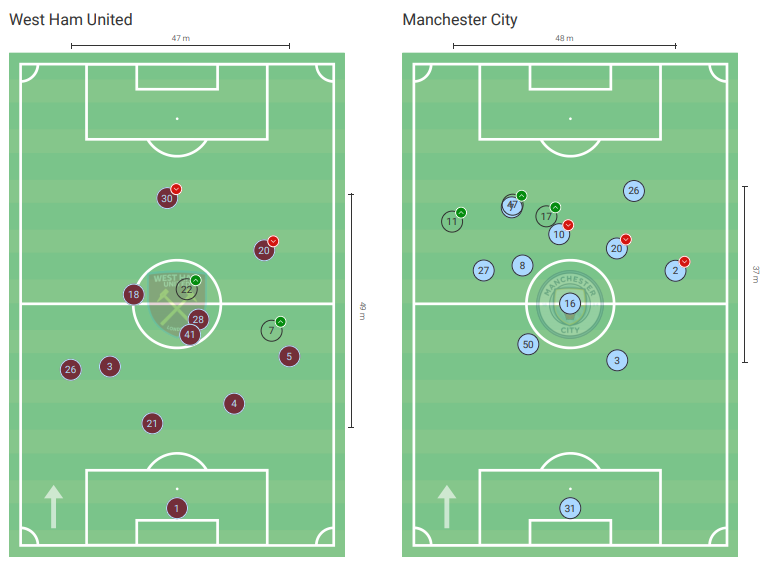 It became increasingly difficult for Sergio Agüero to become an influence as his movement was tracked by a West Ham player throughout the first half. He was limited to a couple of chances but for the most part, was nullified. So much so that he was replaced by Phil Foden at half-time. However, he wasn’t the sole reason for their attacking deficiencies – rather, Manchester City were very slow in rotating possession which played into West Ham’s hands by allowing them to organise themselves at the back.

As we’ll see later in this analysis, West Ham played with a very composed and compact defensive shape which prompted City to find alternate ways of creating chances. It forced Manchester City to resort to crosses from the half-spaces through Kyle Walker and João Cancelo which was easily dealt with by the central defenders. Agüero isn’t a target-man but while he is a potent finisher and complete centre-forward, he will struggle against multiple pressing defenders. 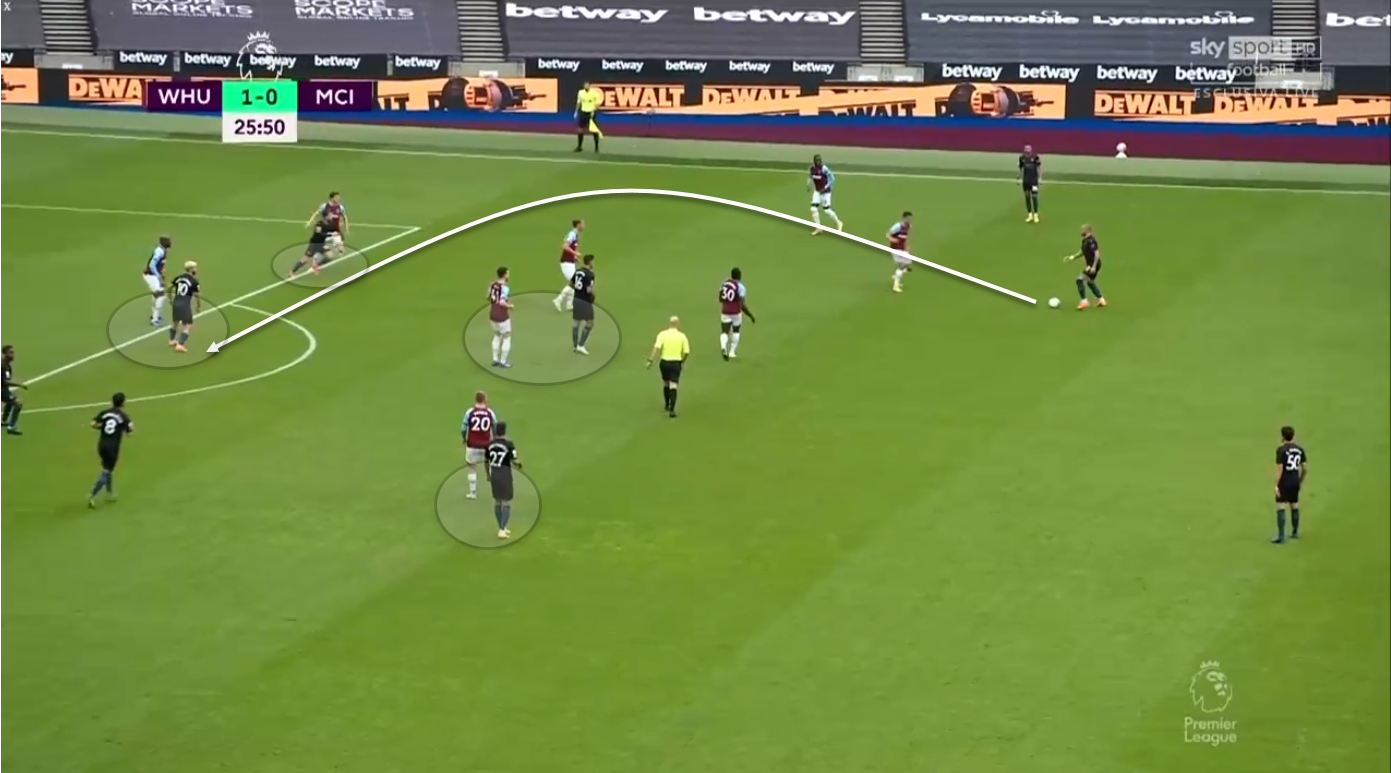 As the image above shows, Walker has moved into the half-space with no real forward passing options without a West Ham player man-marking a City player. This forces Walker to go over West Ham’s compact midfield into Agüero who is marked by Angelo Ogbonna. Even here, West Ham’s defenders outnumber the City attackers (the other two West Ham defenders are out of frame on the left).

This was a result of City’s slow pace in possession and as a result, West Ham were able to deal with City’s attackers. Additionally, there weren’t too many willing runners in behind the defensive line which meant that any time the wide players did get into space, they weren’t able to manoeuvre West Ham’s defenders and create the space. Manchester City’s goal actually came from a moment where they moved the ball a lot faster and managed to get smart off-the-ball movement from Foden who caught out West Ham in between the lines. 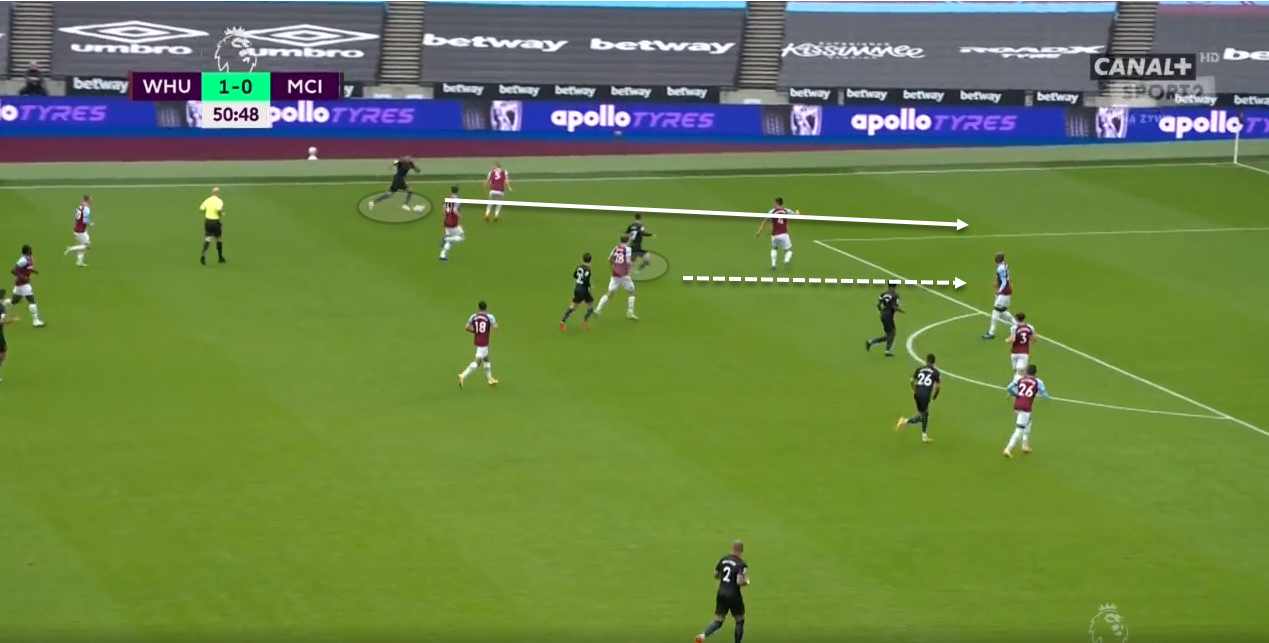 As the first image illustrates, Cancelo faces up the full-back and plays the ball into space but makes a quick burst towards it, beating his man with Foden making an equally lung-busting run forward. In the second image below, once the Portuguese full-back reaches the byline, he sees Foden in space and pulls the ball back rather than aimlessly crossing it into the box. Foden manages to receive the pass and slot it into the bottom corner. This was where City faltered for the most part. The tactics were nullified but Guardiola’s half time change managed to spark some life into City, but on the whole, it was a bit too predictable and allowed West Ham a chance to stay alive all game. 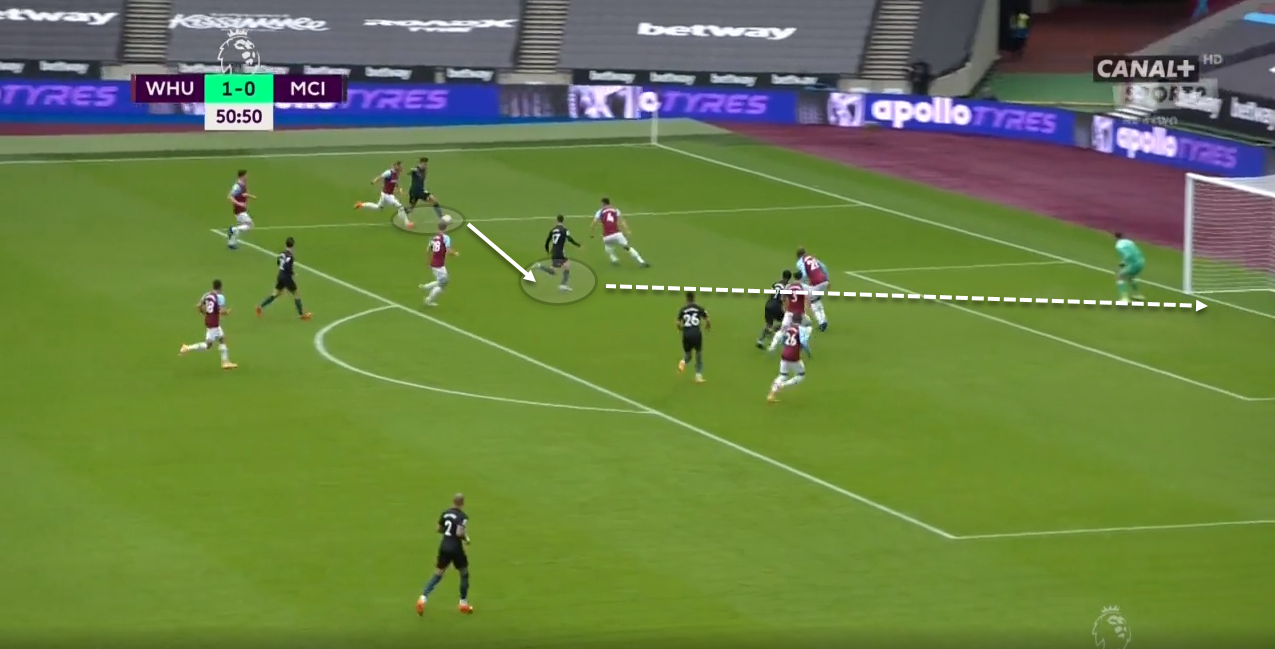 Part of Moyes’ strategy was to sit off Manchester City and allow them possession in their own half and middle third. Their performance against Tottenham Hotspur last week was indicative of what West Ham have been guilty of regularly: switching off at vital moments with some poor lapses in concentration and defending. However, Moyes seems to have found a good formula with this five-at-the-back system that’s kept the top sides at bay. Allowing City to have the ball in unthreatening areas meant that West Ham could provoke City to push their backline forward, giving them space in behind.

However, the main tactical idea was to suffocate the central spaces and force City to use the wide areas where they could force crosses and use their aerial dominance to thwart the away side. City lacked a target man-like figure in the central areas and with three centre-backs in the middle, it was much easier for the hosts to clear any crosses that were put into the box. West Ham did this by allowing City to drive forward with the centre-backs, giving the hosts more time to settle at the back with a chance to organise their defensive shape.

Rice and Souček were instrumental in midfield which involved marshalling Rodri, Gundagon, and Bernardo Silva from making trademark runs and free passes through the middle. The earlier average positions map showed how central West Ham were in terms of their positioning and the duo remained disciplined. While this had the aforementioned effect of pushing City out wide, it also forced City to play longer passes over the top to bypass the crowded midfield area as we saw in the earlier section.

It worked effectively for most of the match as Agüero was forced to move into a deeper position to collect possession and turn. In doing so, West Ham were successful in keeping City’s most potent threat at bay and negated the central attacking focal point forcing Manchester City to cross the ball from deep. When it did go wide, West Ham’s full-backs were relied upon to stay vigilant and tight when it came to 1 v 1 defending against the wingers and full-backs. For the most part, it was a hard task that required maximum concentration but one that was partially successful. 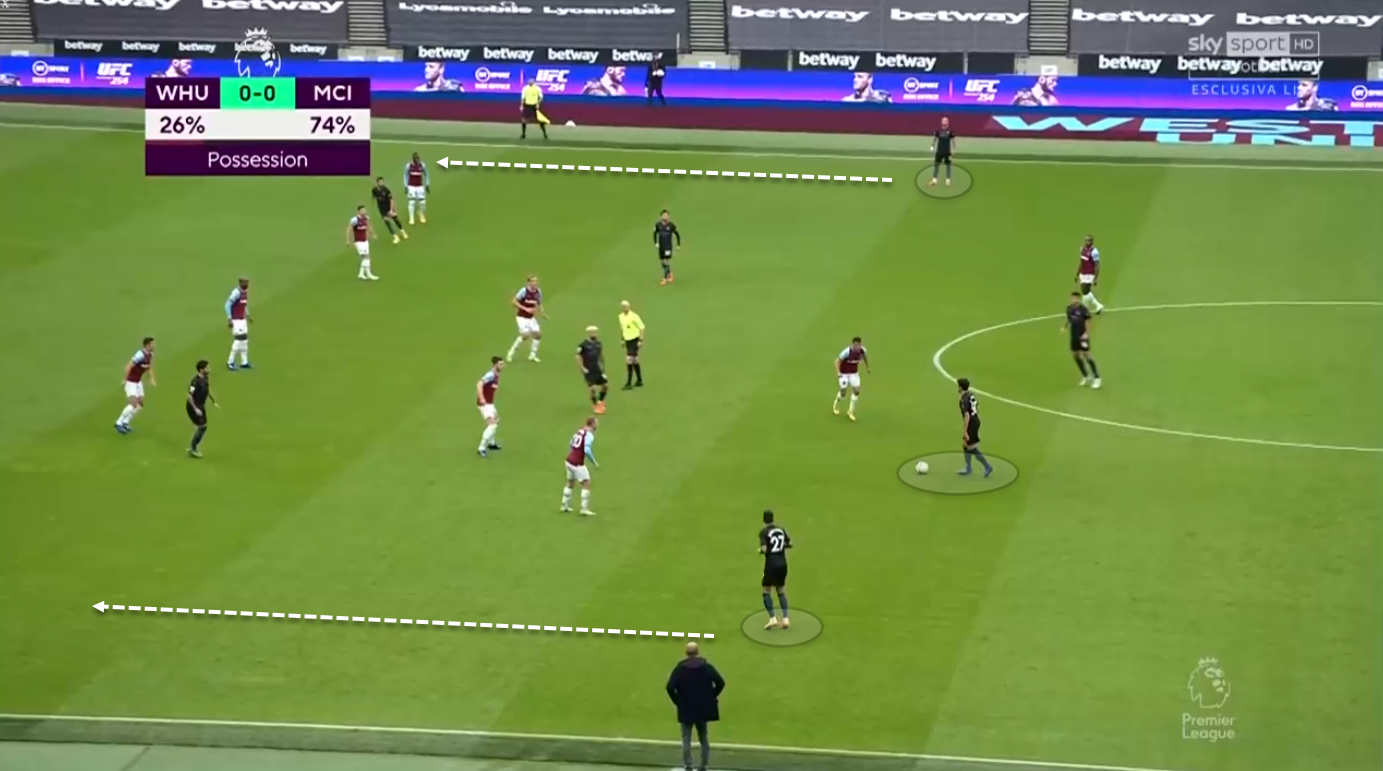 Here you can see West Ham congesting the central area with Agüero forced to drop into midfield to collect the ball. The narrow backline gave West Ham a numerical advantage against City’s narrow attackers but it also meant City were given a chance to go wide. Cancelo playing at left-back meant he preferred coming infield rather than stay outside which once again played into West Ham’s hands. Sterling was capable of taking up wider positions and even then tended to drive into the box. Alternatively, for West Ham, City’s defensive line was pushed up so high that any turnover in possession meant they could counter-attack and use Antonio’s pace and power to get in behind. 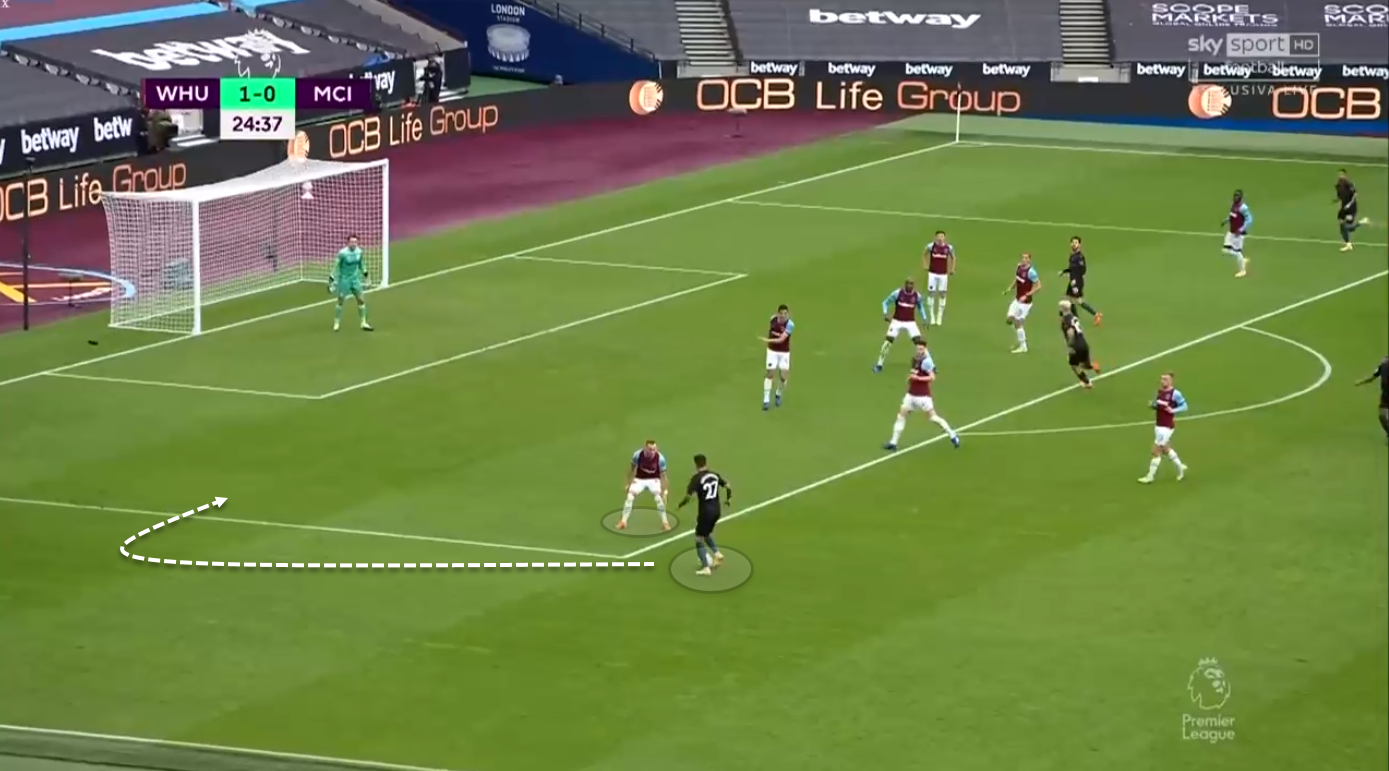 The image above shows Vladimír Coufal taking Cancelo in a 1 v 1 position where he isn’t entirely worried about being beaten because of the large numbers in West Ham’s box. If Cancelo decides to cross then it is more than likely to be cleared with the Hammers’ defenders outnumbering City’s attackers. While they were effective at the back, this system really had them lacking in the forward areas with Antonio isolated.

Their total of five shots and two on target highlights this, however, their only goal came from a rare attack down the flanks. Some good work from Souček to keep the ball in play and pass it back to Coufal whose cross was played into Antonio. Antonio’s goal was more about his good hold-up play than poor defending. Regardless, Ruben Dias could have certainly been much stronger in the challenge to make it more difficult for the striker to score.

Overall, West Ham have come out of yet another tough fixture on paper with points on the board when they were expected to lose. The Hammers will be delighted with their defensive performance knowing that they can be a bit more expressive in the upcoming weeks against Aston Villa and Sheffield United. They face champions Liverpool next but will take solace from this performance and try to replicate it again next weekend.

Manchester City meanwhile will need to improve as a whole. Dominating possession and the ball is one thing but being able to create meaningful chances and finishing them is where they must improve on. They showed good finishing against Porto in the UEFA Champions League and Arsenal last week, but struggled against Leeds United prior to those games.