The Allianz Arena hosted an emphatic display by one side in the Bundesliga between Bayern Munich and Eintracht Frankfurt. This tactical analysis will break down the game that finished as a 5-0 victory to the home side.

Bayern Munich, led by Hansi Flick, have looked back to their emphatic selves in recent weeks after a blip against Hoffenheim towards the end of last month. In this analysis, we will discover how Flick’s tactics resulted in a dominant win for die Roten.

Frankfurt, managed by Adi Hütter, started the season in pretty strong form, sitting at the top of the table after gameweek three. In recent weeks, their performances have begun to stutter. This analysis will take a deeper dive into how they lost this game and where it all went wrong. 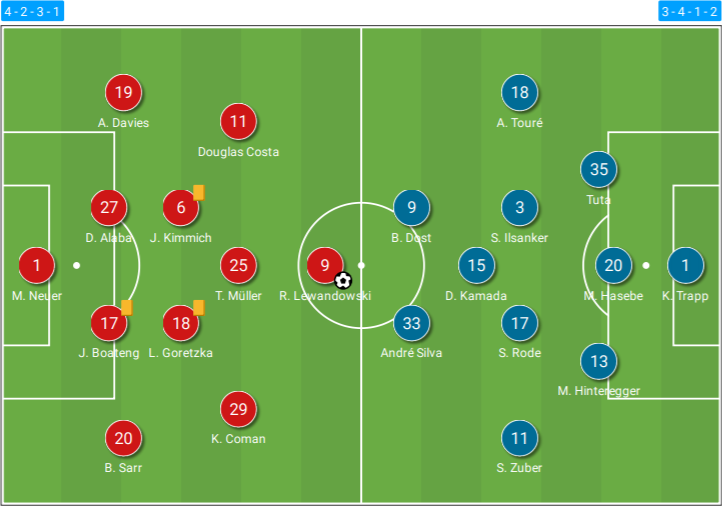 After a midweek fixture, it was interesting to see how his regulars would fare in this match. Former Arsenal forward Serge Gnabry tested positive for coronavirus in midweek and is now out of action for at least 14 days, thus missing this fixture, allowing Costa to start in his place. Corentin Tolisso is suspended for two games after his red card as a sub against Arminia Bielefeld last weekend, meaning he was unavailable for this one too. Leroy Sané resumed training this week but was always unlikely to be rushed into the starting XI.

Former Borussia Mönchengladbach midfielder Amin Younes, signed on loan from Napoli, made his debut last weekend as a substitute, but Kamada was favoured to start in this fixture. Former Bayern midfielder Rode started in the midfield, pairing up with experienced veteran Islanker. Frankfurt’s star man Filip Kostić has resumed light training after a knee injury but was never going to be thrust into the starting XI. Evan N’Dicka was close to making a return after an unspecified muscle injury, while Jetro Willems is still recovering after his ACL injury.

Bayern exploit Frankfurt on the break

In this game, as they usually do, Bayern started the game in a 4-2-3-1 formation, which becomes a 4-1-4-1 in a defensive posture. Kimmich anchored in front of the defence, while Goretzka and Müller aligned to create a man orientated band across the middle. Lewandowski pressed the opposition centre-backs, while the wingers pushed up when the ball went wide. Bayern also pressed in the wide spaces effectively, by pushing the full-backs high on the ball side of the pitch, leaving an effective three at the back, while the winger and the midfielder pushed across to cut off passing lanes back infield.

Here, we can see Bayern in the build-up phase. Boateng occasionally ventures forward with the ball, with Hernandez at left-back acting in a more defensive role than this full-back counterpart, Sarr.

This band of attacking players was used to great effect in Bayern’s first goal. At least four Bayern attackers would move up the field at the same space, allowing for quick and smooth link-up play to occur and drag the Frankfurt defence into one area, only to send the ball in the opposite direction. Coman was especially vital in this regard against Frankfurt, linking up particularly well with Müller and using his strong dribbling ability to carry the ball into the final third. His pace and urgency were very effective against a side who typically press high, leaving plenty of space in behind to attack.

In the above analysis, we see the aftermath of a long ball which reaches Müller, bypassing the midfield line of pressure. Coman faces the ball to receive it.

Coman takes the ball, runs towards the penalty area, with a few options he could explore. Müller continues to make the run down the half-space, but he ultimately opts to meet Lewandowski’s run, to assist the first goal.

In this game, Bayern were very adept at making the most of counter-attacking opportunities. Generally, Bayern dictated the tempo of this match and had the lions share of possession, but when Frankfurt attacked, they were not aggressively pressing their opponents until the visitors reached their defensive third. From here, they regained the ball and sparked an attack on the break with numbers. This would often lead to an overload in the half-spaces that Frankfurt could not contend with. Bayern completed twelve counterattacks here, with nine of them leading to shots, a very positive return.

In the above analysis, we see Bayern regaining possession in their defensive third. From here, they have six men who are running up the field to contribute to the attacking transition, in this case even Hernandez.

Bayern started this game on the strong foot and only grew into the game as it went on. It helps Flick tremendously that he has a striker who is setting goalscoring records for fun at the moment, and the Pole deserves all the credit he receives. ‘Lewy’ took his league record to ten goals after just five matchdays, which is a new Bundesliga record, all while becoming Bayern’s second top goal scorer in the process, only behind footballing icon Gerd Müller.

In this scenario, we see Lewandowski calling for the through ball to be played between the two centre-backs.

From here, Lewandowski still has a lot of work to do. Receiving pressure from his left and imminently on his right, he has to shoot fast, and he does so, calmly, into the bottom right corner. Classy.

His game was much more than just making runs down the centre of pitch too. He was often found carrying the ball into the half-space and looking to either create space or create chances for his attacking teammates. In this game, he was particularly adept at dragging the ball into wider zones, positioning his body as to fake the opponent and play the pass they were not expecting.

Here, we can see Lewandowski angle his body for the cross, which would enter a crowded area.

He fakes the defender with a stepover and then passes the ball to Hernandez, who is in space and can play a one-two with Coman to create a chance on goal.

The 32-year-old finished the game with six touches in the penalty area, five shots, and a perfect hattrick to make for a resounding performance, and all that Flick could possibly ask for. He was influential in almost every phase of play and continues to be the best player in the world based on form right now.

Let us get this straight, this was an absolute pummelling by Flick’s men. Frankfurt barely had a sniff at Bayern’s net barring one missed chance from Touré in the second half and a missed opportunity in the form of an individual error from full-back Sarr which Dost did not capitalise on. Their pressing was unusually not as effective as it typically is, with their defensive efforts not resulting in a turnover in possession as often as normal. Their PPDA was 14.6 in this match, compared to Bayern’s 9, we can clearly see which side were better set up for this event.

In the above analysis, we see Rode standing before a freekick opportunity. Marked is the intended destination of the ball. Silva and Dost look to distract the two highlighted Bayern defenders with their runs.

Despite the platform create for him to time his jump and aim his effort towards goal, Touré heads the ball far wide of the post.

Hütter’s side played with width in this match as they usually do, but their passing interplays were not successful here. Admittedly, they were playing against a side whose game plan went exactly as intended, with Kimmich particularly putting in a complete display. The German would often drop in between the two centre-backs to form a back five and establish a platform for ball progression with his vertical passing options. Bayern’s defenders covered each other adeptly in this game, and it nullified Frankfurt’s attacking plan, as they prefer to play fast attacking rotations to enter the final-third and create chances, but here they were unable to do so. 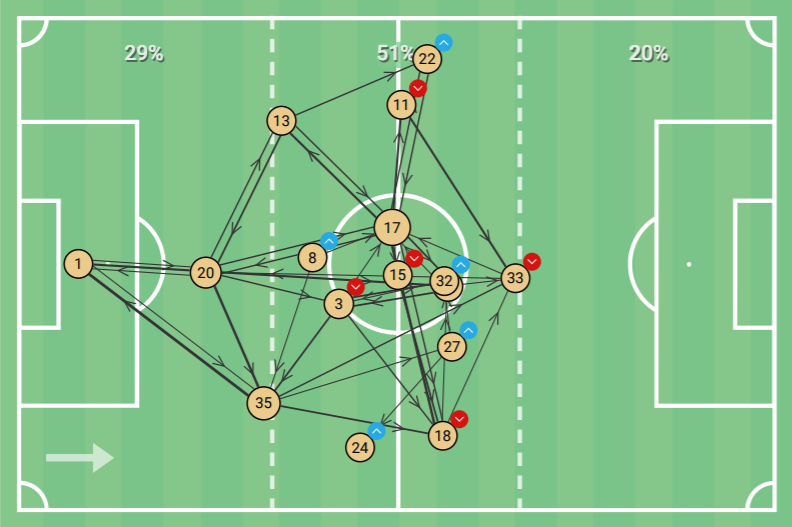 In this game, Frankfurt’s defence were constantly exploited for employing such a high press. A typical attacking scenario for Bayern would begin with them regaining possession in their defensive third and passing the ball back to Neuer in goal. From here, the keeper would play the long vertical ball into Bayern’s midfield territory, which would take out at least one layer of Frankfurt’s press in one pass. Owing to Flick’s setup, in these situations Bayern always had a player (often Goretzka from midfield) making bursting runs into the final-third to provide a shooting option.

After receiving the ball via a Neuer long ball, Chupo-Moting has space to run into and exploit, with Goretzka in plenty of space to collect it.

Unfortunately, at 36-years-old, Japanese international Hasebe does not have the recovery pace necessary to prevent Goretzka’s shot on goal, which is something Hütter should consider.

Ultimately, Frankfurt’s passing was inept, and not only in the final third which is natural but in their own half, where they were punished for their shortcomings in this respect. This was reflected in their 77% passing accuracy, which is simply not good enough for a side who did not create the volume of chances necessary for that statistic to be even passable at the top level. Add on top of this their naïve defensive positioning and Bayern’s excellent attacking prowess, this game was as one-sided as they come.

In conclusion, Bayern put in a dominant performance against Frankfurt to regain their claim to being title favourites, although that might be debatable given Leipzig’s current form. xG backed up this statement by valuing each side’s chances at 3.31 and 0.57, respectively. Flick will come out of this game with renewed optimism that his side are back to their brilliant best after a brief period of sub-par performances, while Hütter it seems will have to make certain tactical adjustments going forward if he does not want to be exposed in the matter he was at the Allianz Arena.