In the 14th match week of the 2020/21 Premier League, Everton hosted Arsenal at Goodison Park in what was the last league game before the Christmas round of fixtures. Everton came into this match on the back of impressive wins against both Chelsea and Leicester City. A win here would put them five points behind Liverpool and back in the hunt for a top 4 spot.

Arsenal, on the other hand, are on the back of a six-game winless run with their last victory coming against Manchester United in early November. Mikel Arteta’s men would have liked to put their misery to end and register an important win to climb up the table.

This tactical analysis focuses on the tactics deployed by both managers. Let’s begin the analysis.

Everton lined up in a 4-2-3-1 formation that shifted into a 4-3-3 when they had possession of the ball. Ancelotti made just one change to the line-up that beat Leicester 2-0 in the midweek with Tom Davies coming in for Allan. 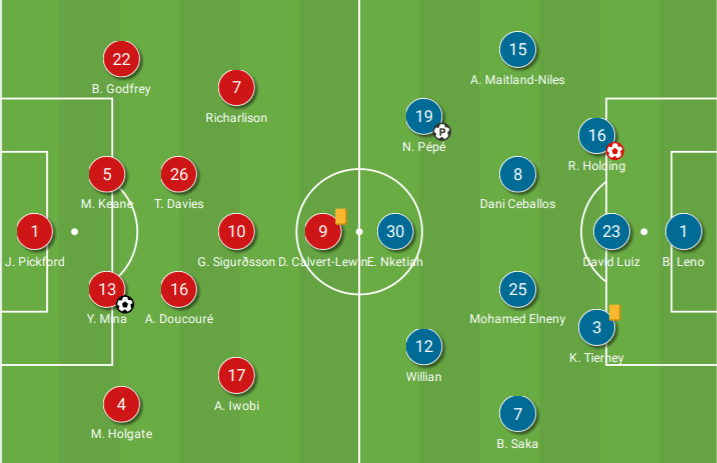 Mikel Arteta changed his system slightly and went with the same structure that won Arsenal the FA Cup in August. Aubameyang’s calf injury meant he missed out of the squad in the last minute and Gabriel Martinelli made his first appearance in the bench after 10 months. David Luiz made his way into the playing 11 in place of the suspended centre-back Gabriel.

In the absence of James Rodriguez due to injury, Carlo Ancelotti changed his tactics recently with the use of a 4-1-4-1 / 4-3-3 formation where one of his double pivots was customised into a number 8 and occupied the right half-space, and it would be mostly Doucoure. Sigurdson, from his natural CAM role, would drift into the left half-space. This change in the system was after a barren run of form where they lost two of their major creative outlets, Rodriguez and Lucas Digne. Since he no longer had the luxury of crosses from his full-backs (Coleman from the right side), he has been forced to use two make-shift full-backs (predominantly CBs) in that place. 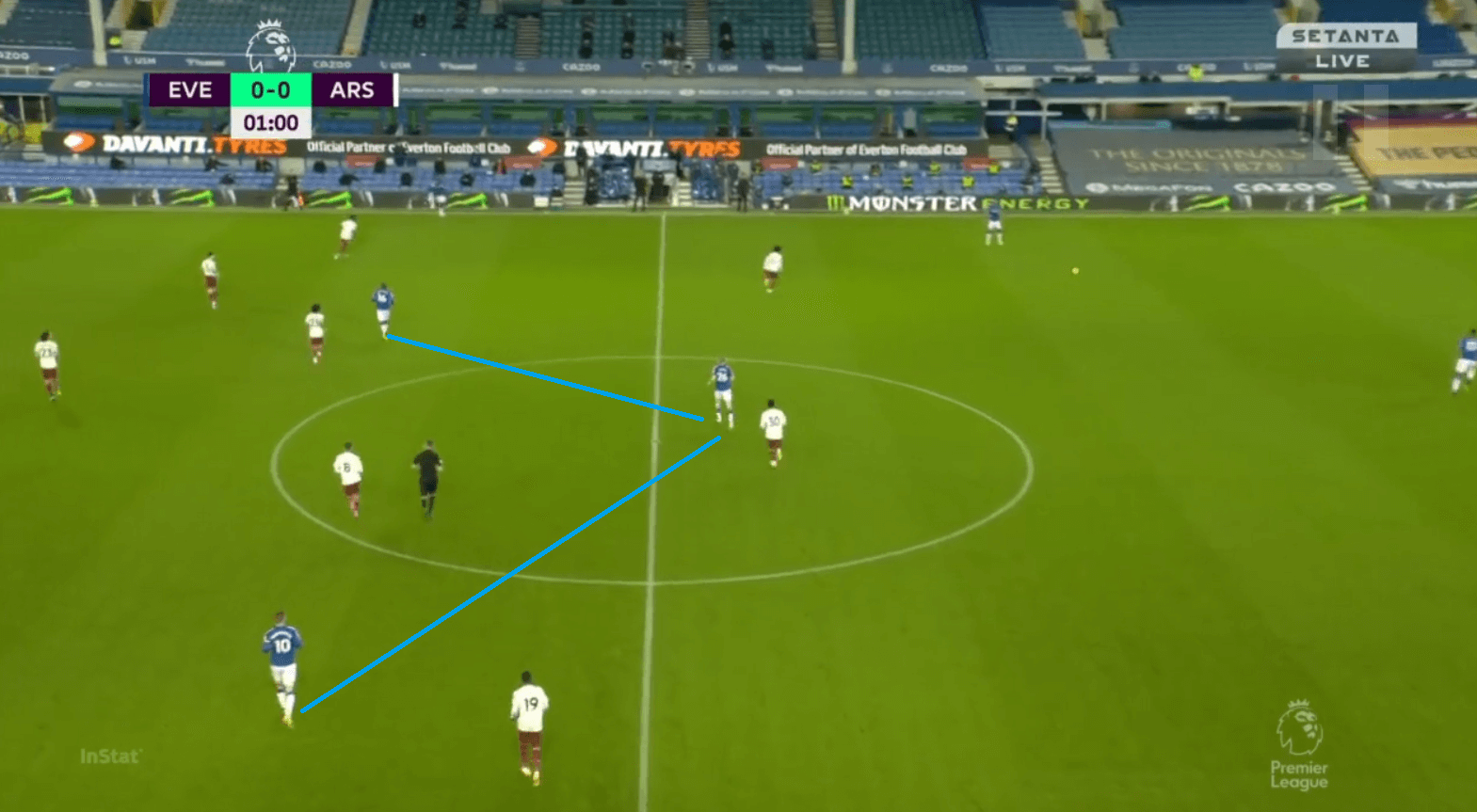 Everton in their new set-up now use the concept of half-spaces to the full effect like Manchester City under Pep Guardiola. The wingers stay very wide to stretch the field while the half-spaces are left open when the defenders go out to press the Everton forwards. Sigurdsson and Doucoure then run into these spaces and look for cut-backs.

An example of that can be seen below, as a switch of play into the left-flank forces Arsenal to reorganise after they pushed men to the other flank. Maitland-Niles now presses Richarlison and this opens the half-space for Sigurdson to run into, though Sigurdsson has performed this role of a number 8 decently. His cut-backs have been largely poor due to his weaker foot being left and he cannot naturally give a cut-back. 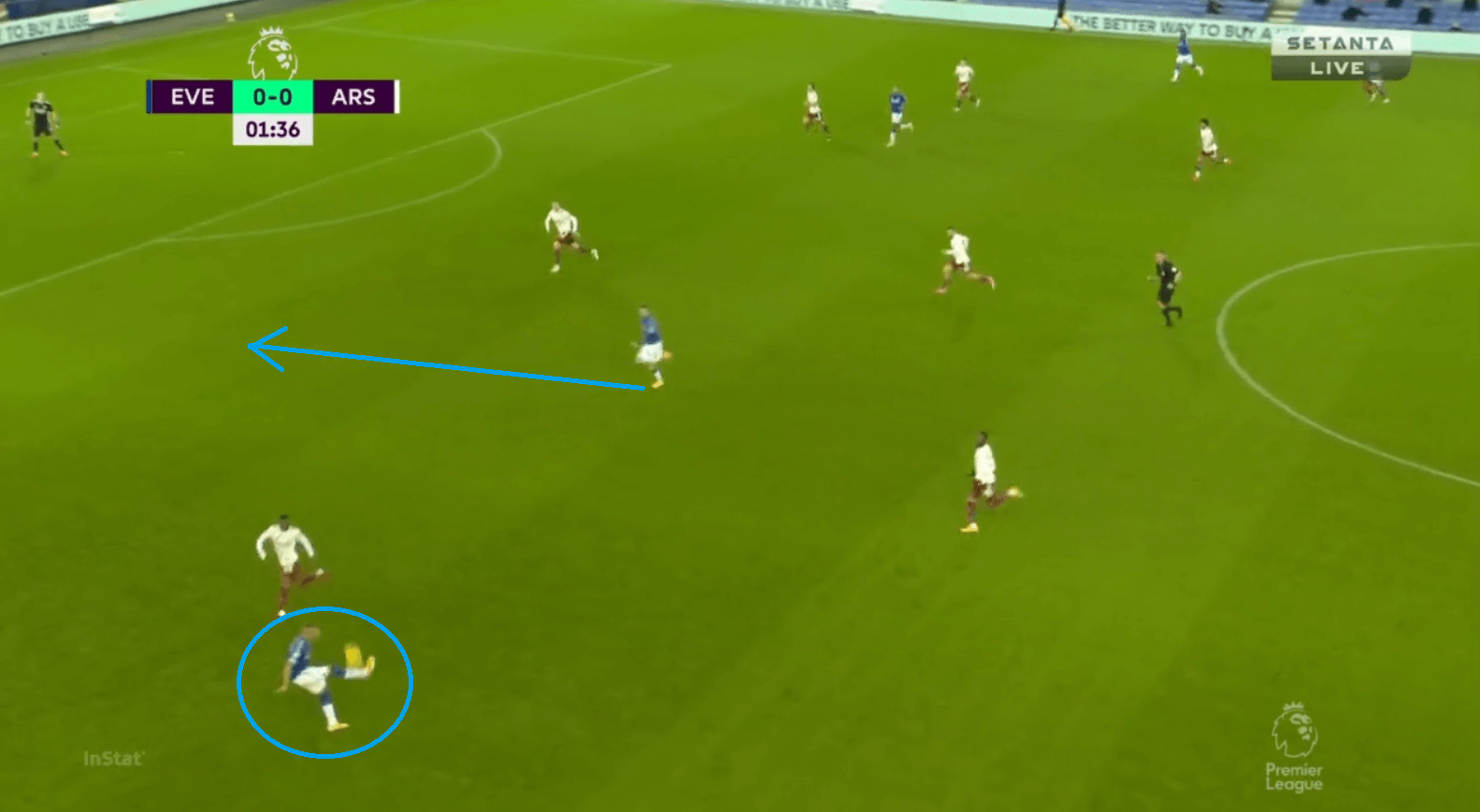 Like in their previous games Everton heavily relied on directness and were very successful against a very weak Arsenal defence in the air. They had a total of 5 shot attempts from set-pieces. Their talisman, Calvert-Lewin, won a game-high of 4 aerial duels. He was pretty unchallenged by the likes of Holding and Luiz in the air and even when Pickford had to send in a panic long ball due to pressure. Calvert-Lewin ensured that Everton regained their advantage by winning the first ball. 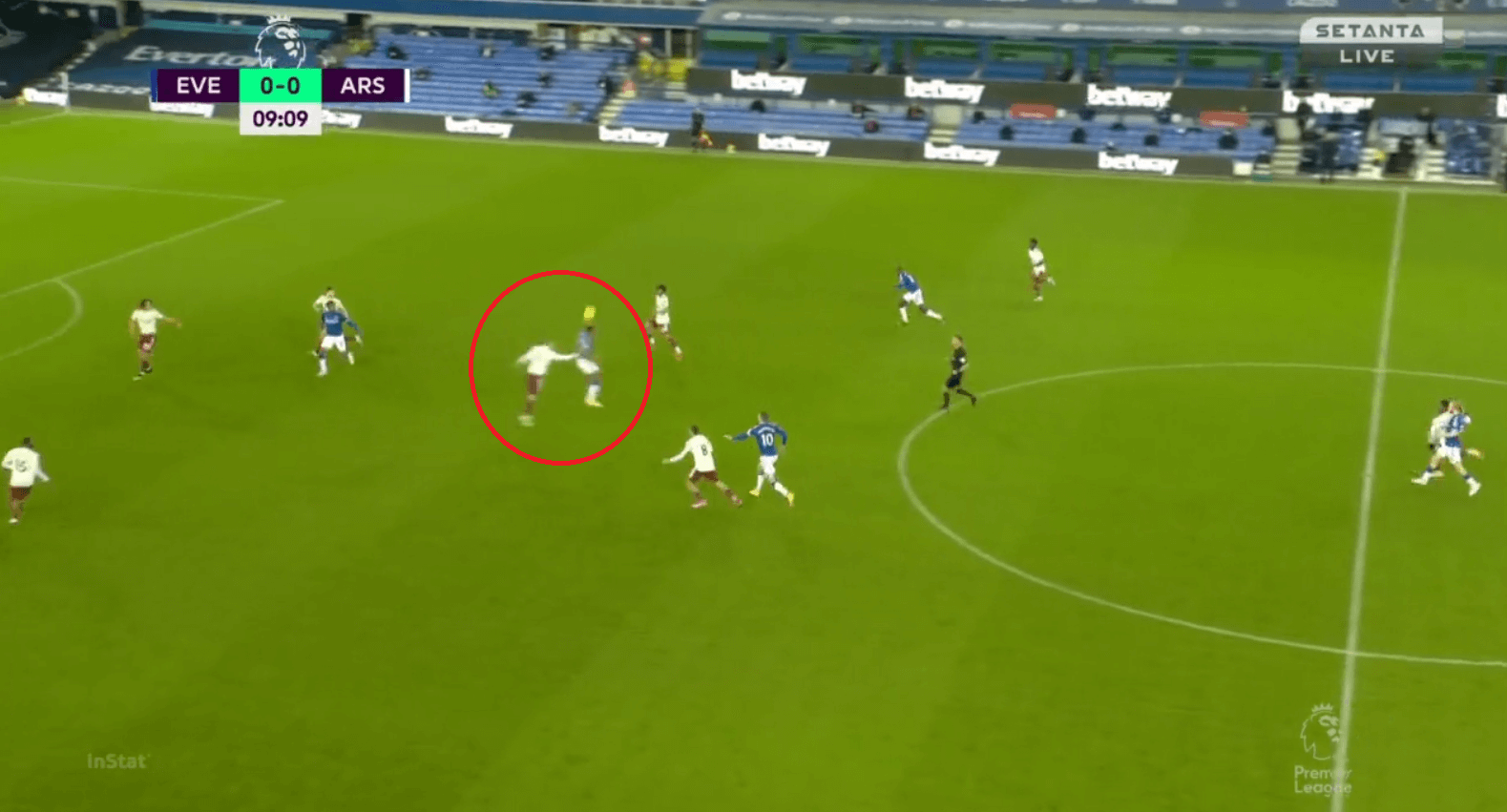 Arsenal set up in a mid-block in their 3-4-3 formation. Bukayo Saka played in the wing-back role while without the ball. They would set up a high line and also squeeze the space in between the lines so that the likes of Richarlison and Sigurdsson don’t get much time and space on the ball. 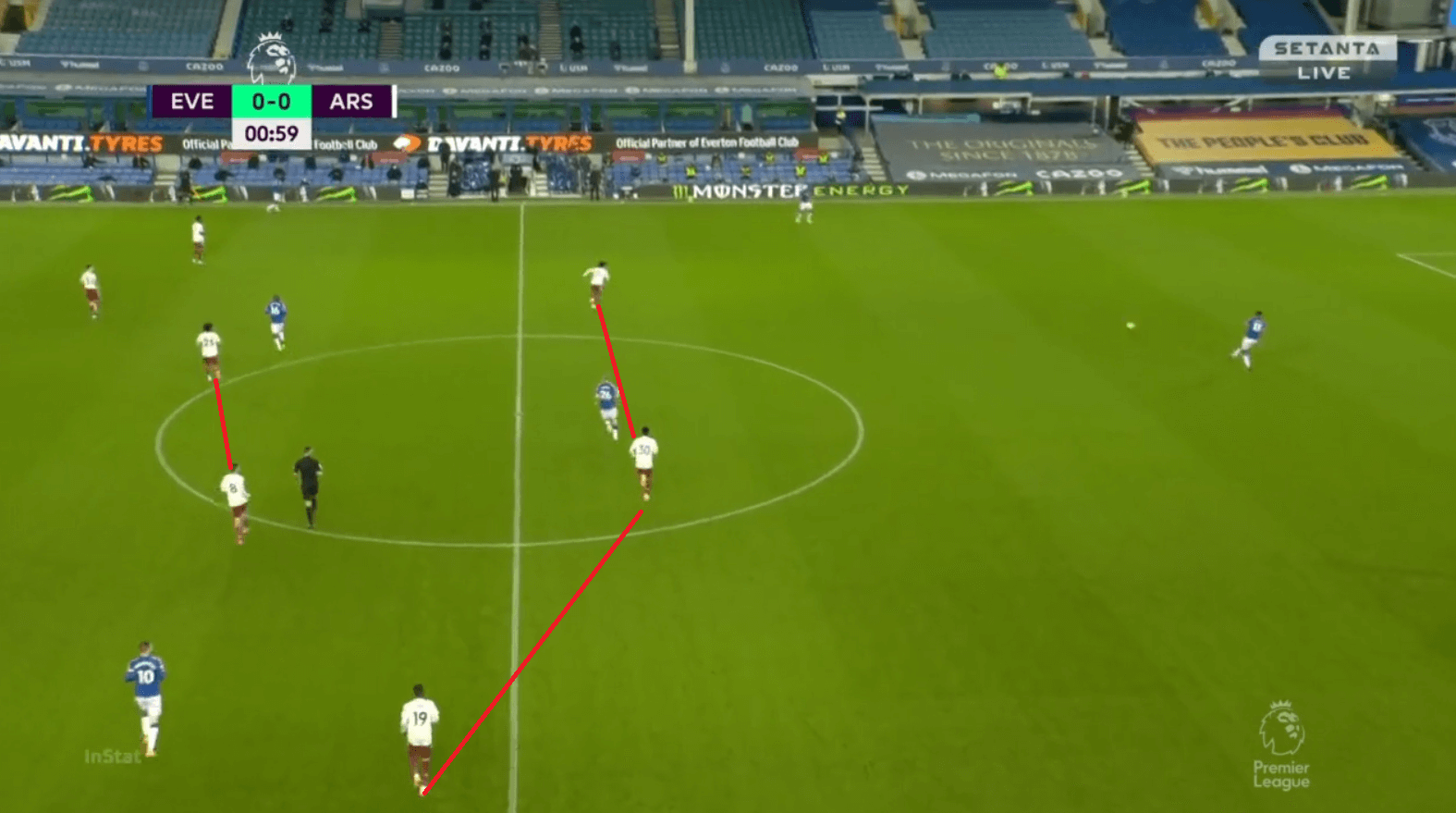 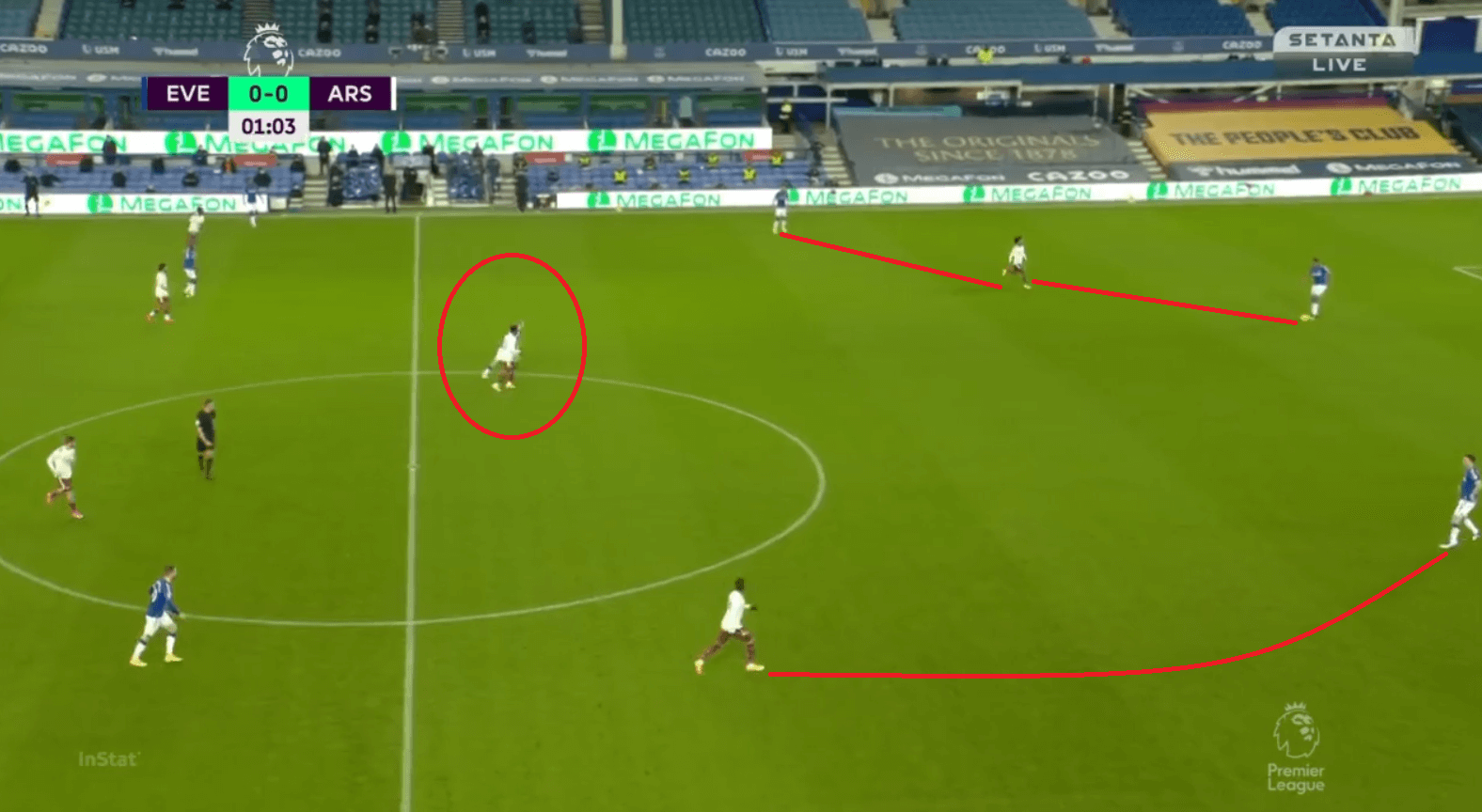 When the ball went back to Pickford, Arsenal closed down all the passing options to him that was short where he had no chance but to go long from where Arsenal tried to win a 50-50 duel with Calvert-Lewin. Arsenal’s closing down of players in the first 10-15 minutes were very good and Everton struggled in that phase to move the ball into the subsequent thirds. 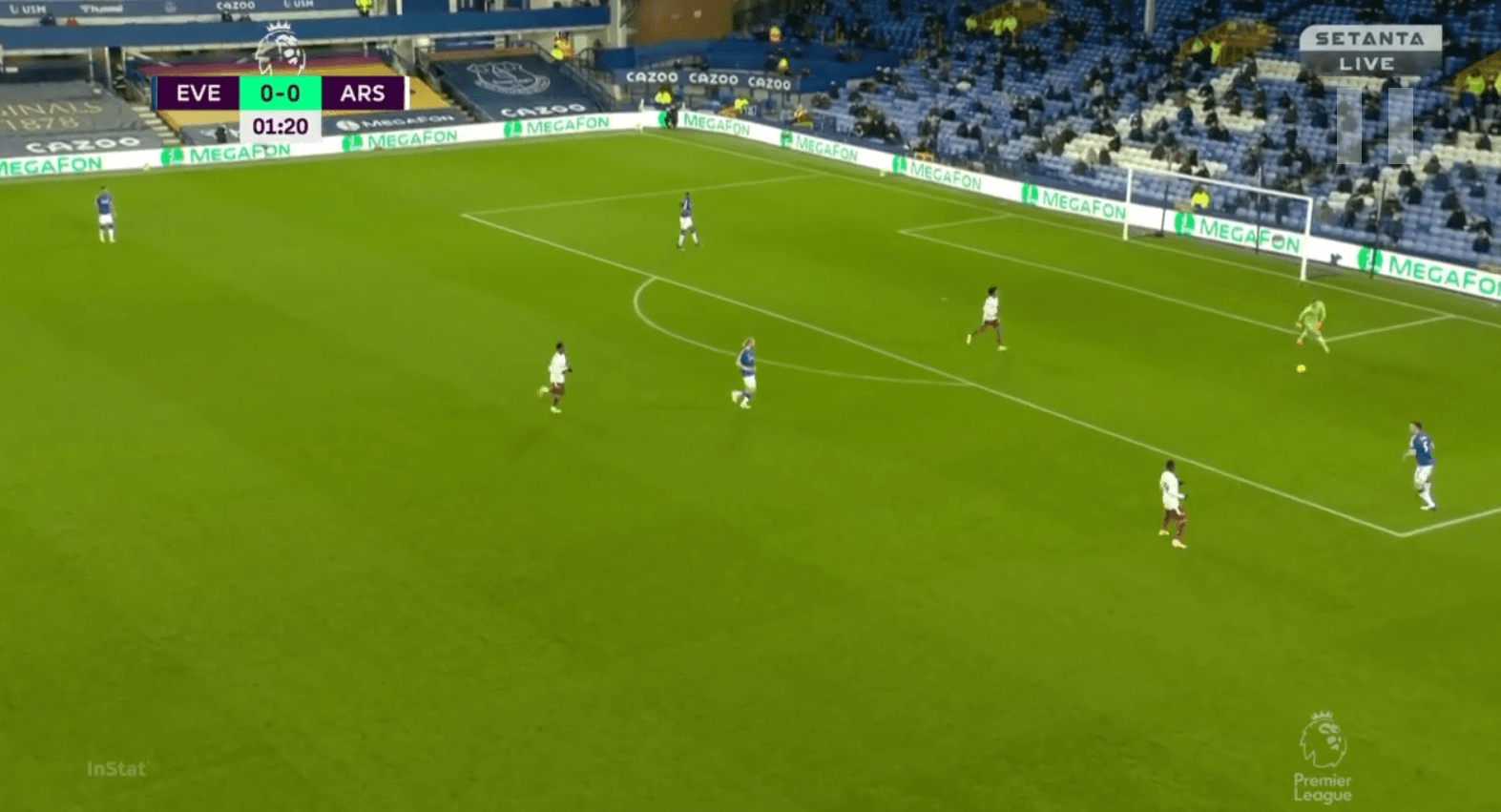 Arsenal went back to their post-lockdown structure that Mikel Arteta used to great effect in their FA Cup win. Tierney’s role changed from a left centre-back to a full-back with possession, while Saka pushed very high to overload the left flank along with Willian. 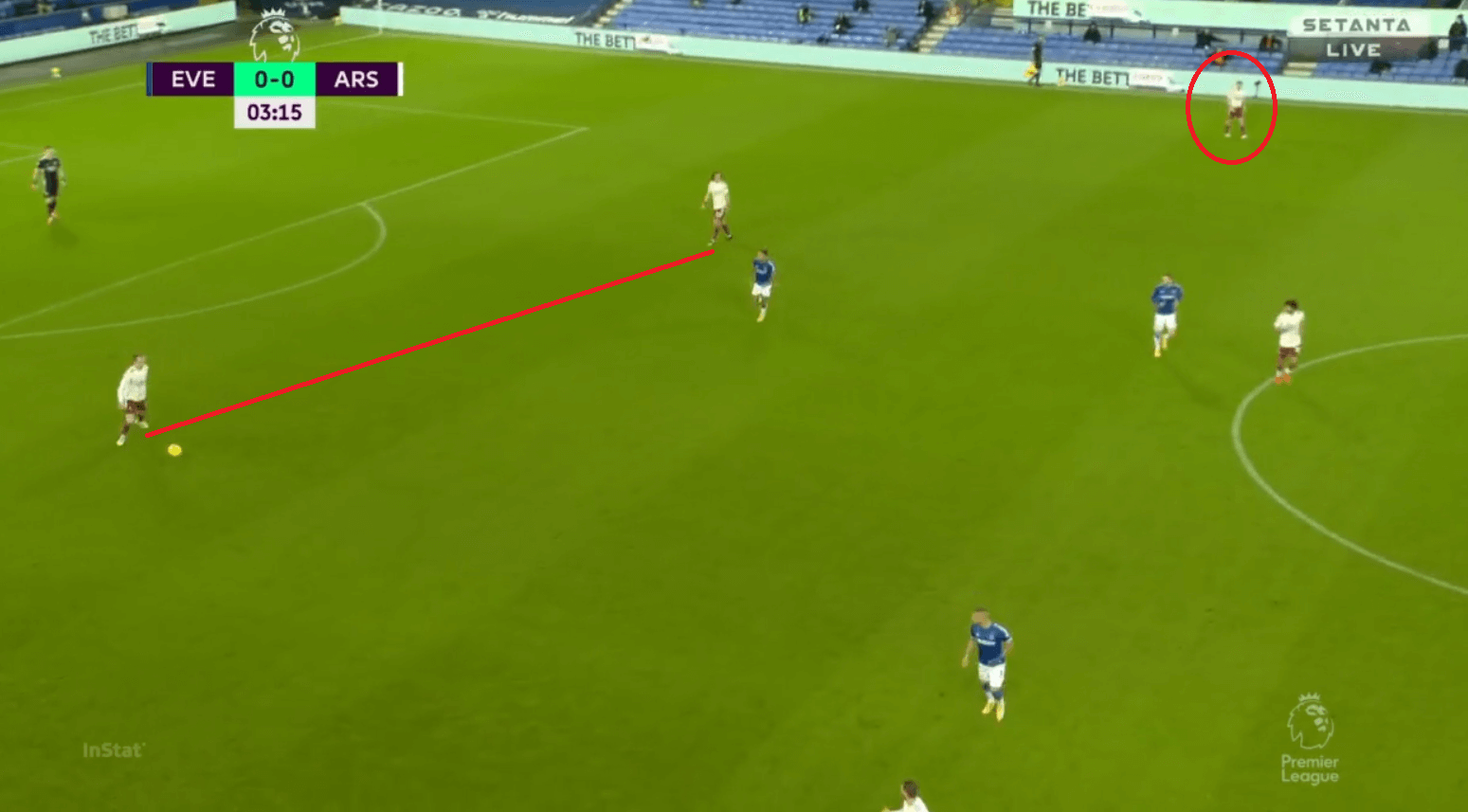 Arsenal initially dropped only a single pivot so that the other one pushes higher and plays in between the lines. But since Everton marked Elneny, the progression was difficult and they immediately formed a double pivot. Now Sigurdsson came into a 2 v 1 situation, and this dilemma left one of them free and Arsenal were free to progress past their defensive third. 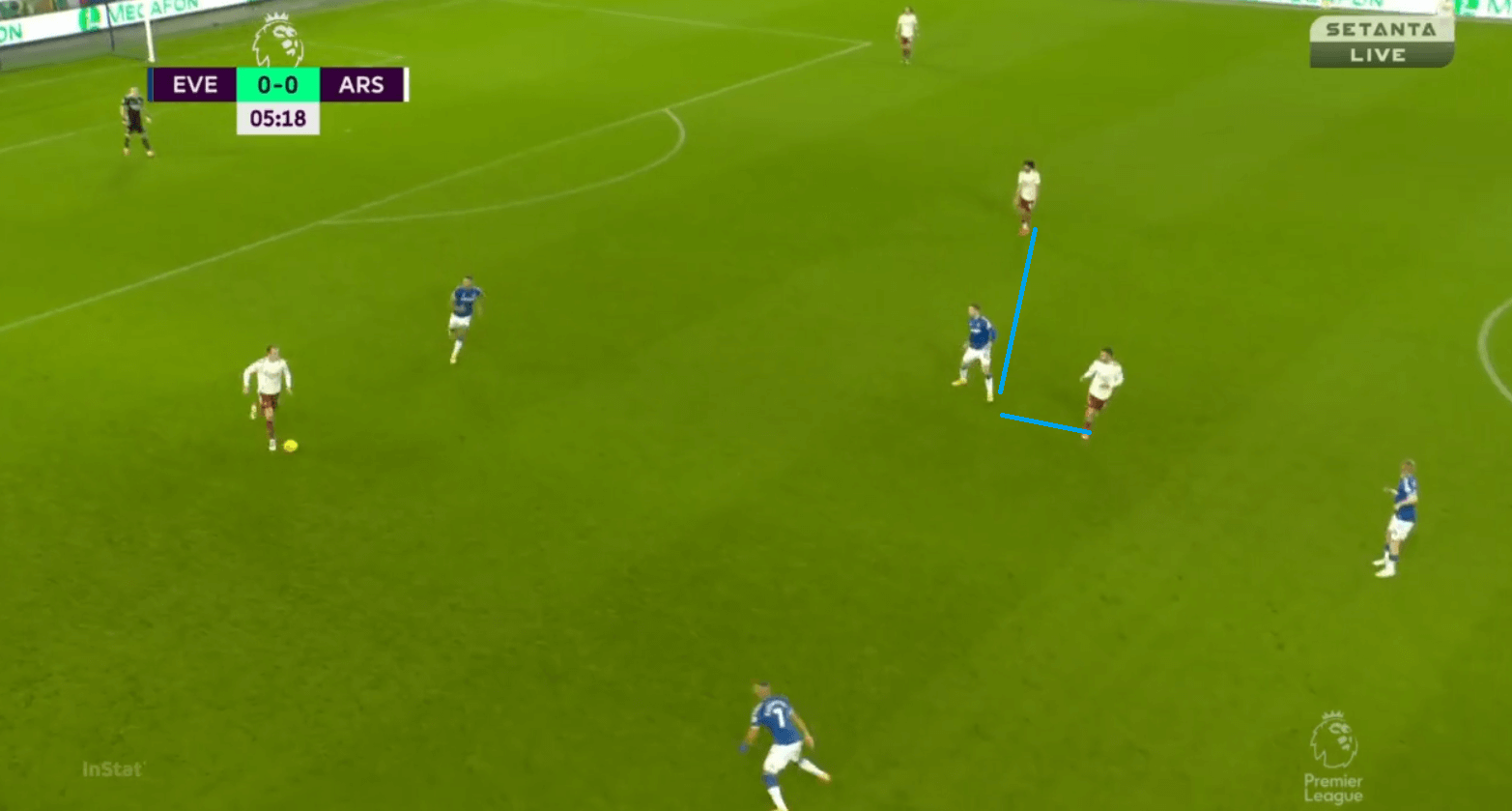 The constant issue with Arsenal this season is their final third play as they have been consistently lacking a cutting edge and were let down by poor decisions and passes in the final third. This was evident in this match too as the players were very passive at times and weren’t willing to take risks. In the example below, Maitland-Niles receives the ball from Pepe and passes back to him. After that, he made a run into the spaces behind while Pepe attracted two players. Pepe just needed to play a simple pass to him that would leave him in huge space and opportunity to cut back. Pepe instead passes the ball sideways and the opportunity is lost. 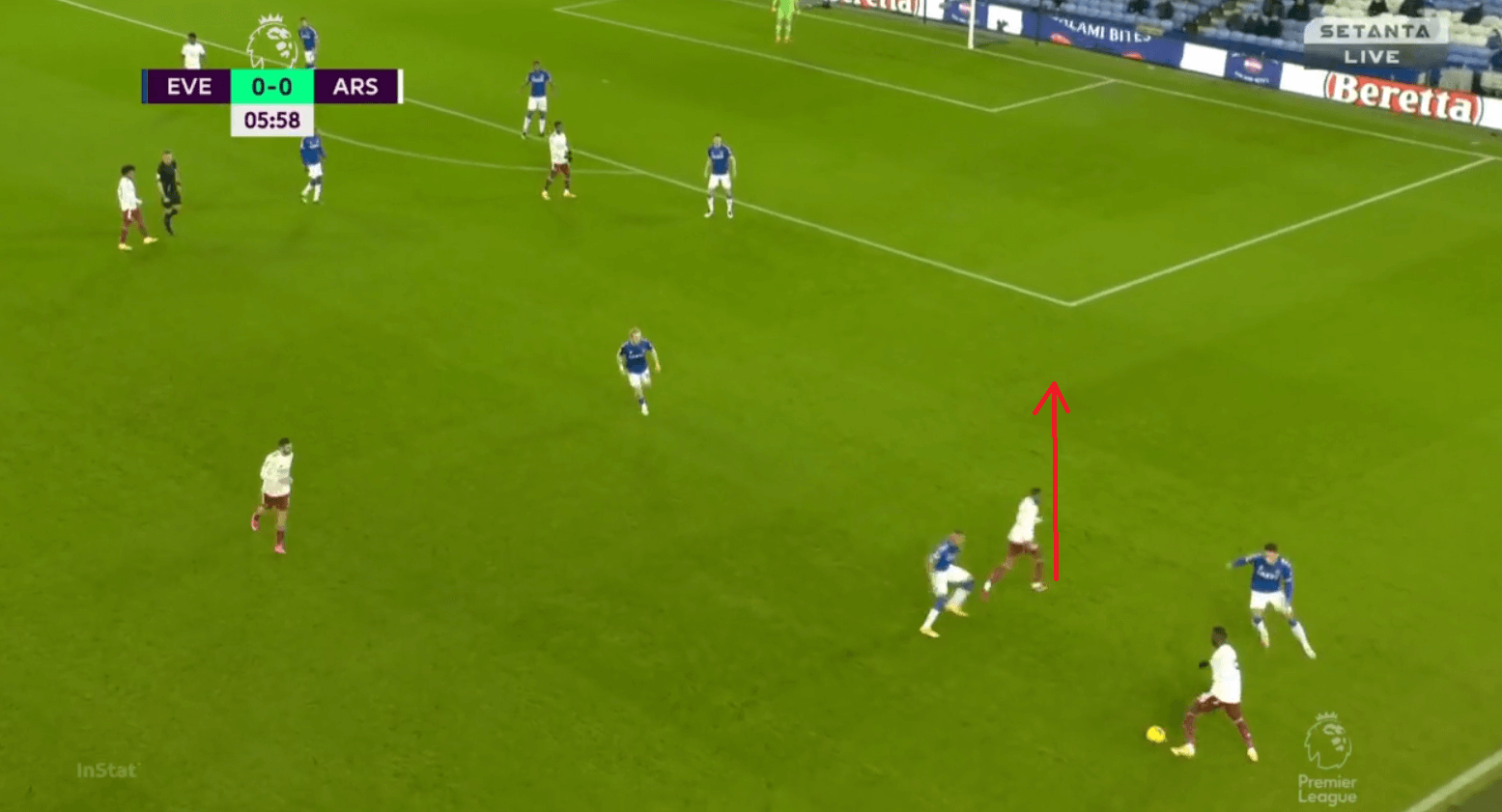 Arsenal used their left flank quite well compared to their right one to progress their ball, owing to the fact that they had two naturally left-footed players on that side and along with Willian, the overloads and opposite movements ensured the players were released easily. Tierney also overlapped despite playing as a centre-back. 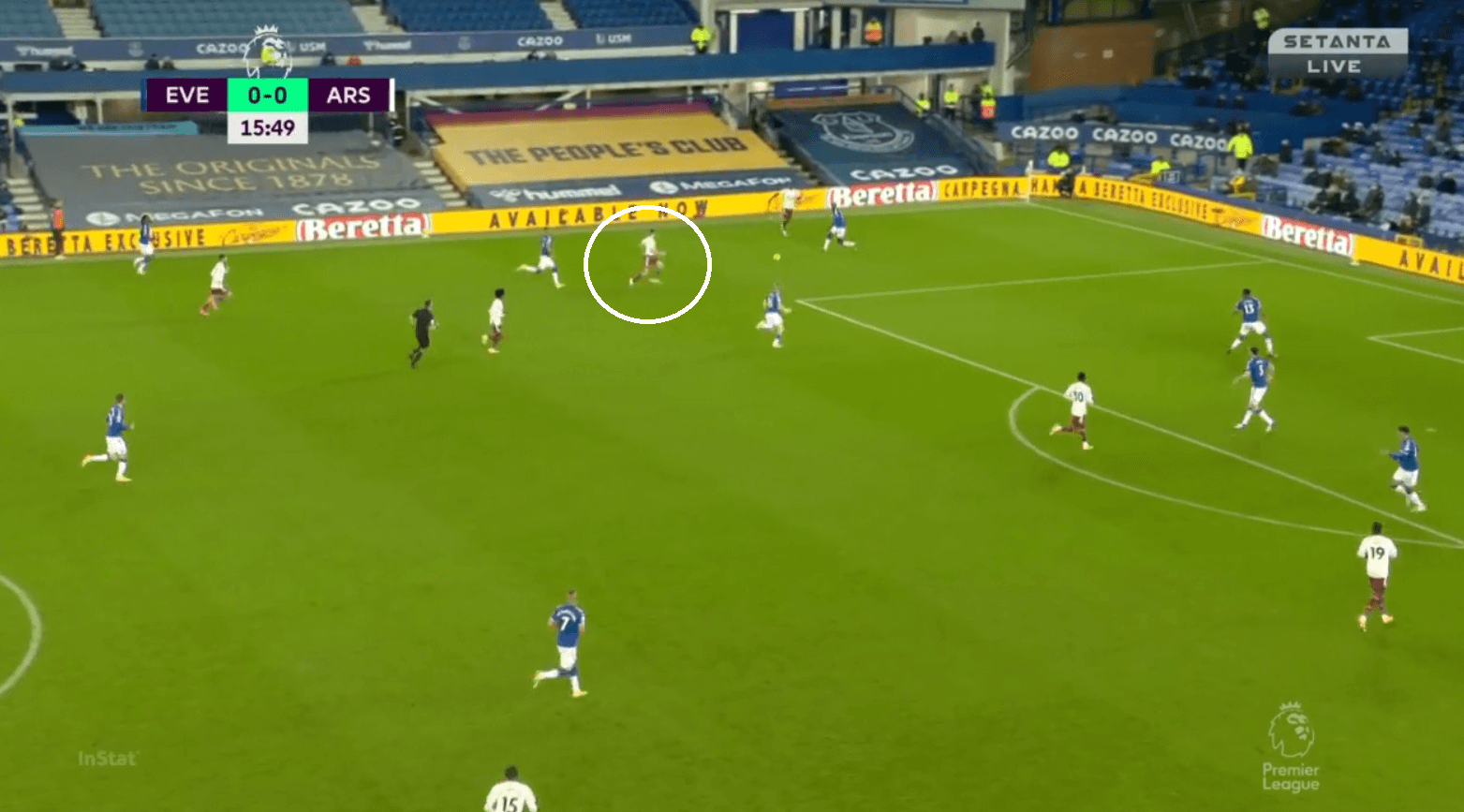 The close abilities between the Saka and Tierney meant that opposite movements can be facilitated with Saka dropping and Tierney moving up. Willian too kept dropping into the half-space, often dragging Doucoure with him. This freed up space behind for either of them to attack. 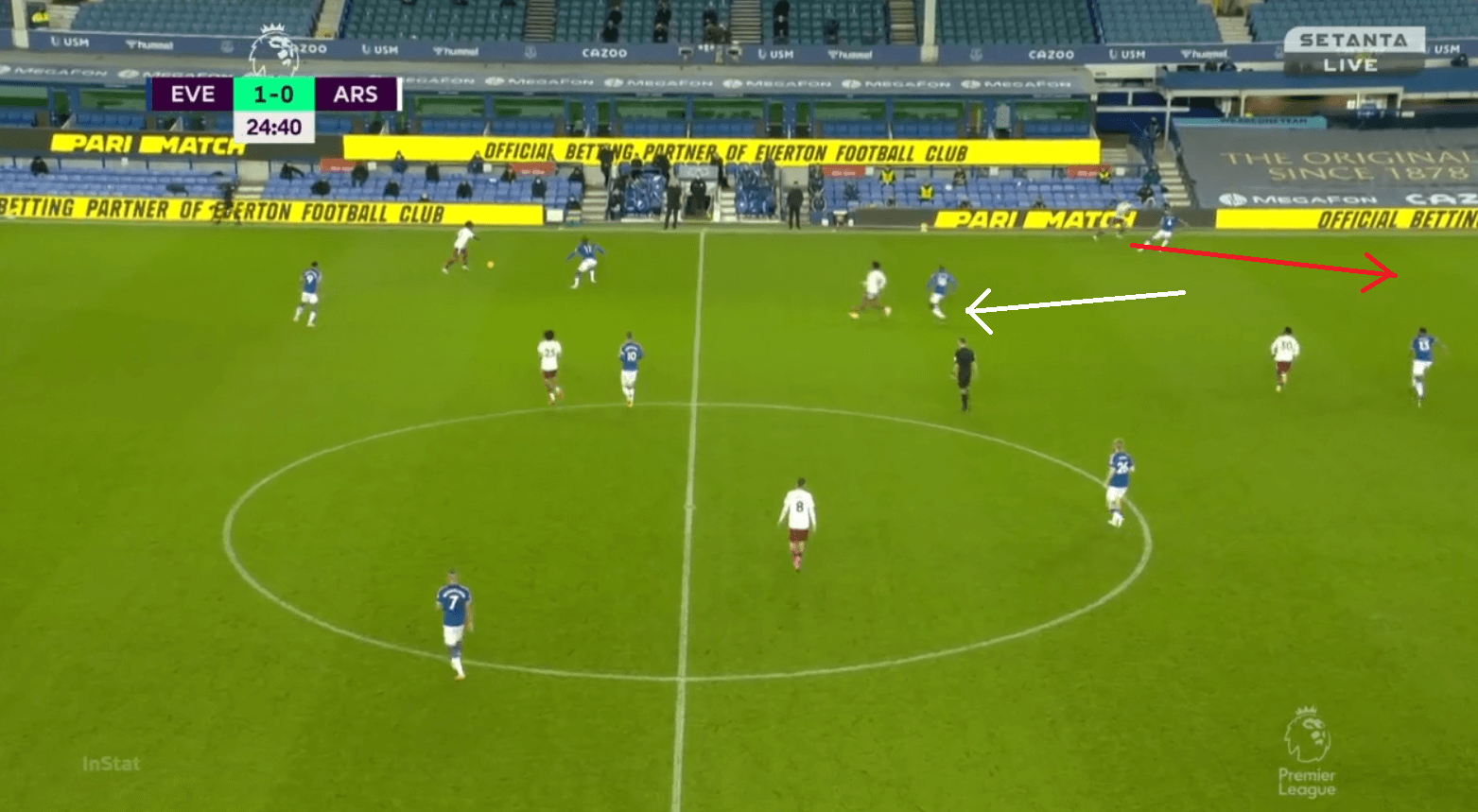 Everton went with a 4-2-3-1 structure of the ball as Sigurdsson shifted into his natural CAM role. This was done to give them the opportunity to counter-attack with four players and Sigurdsson spraying the passes. Sigurdsson kept marking Elneny to stop the ball from progressing to him, while Calvert-Lewin pressed the centre-back by cutting out the passing lane to another centre-back. 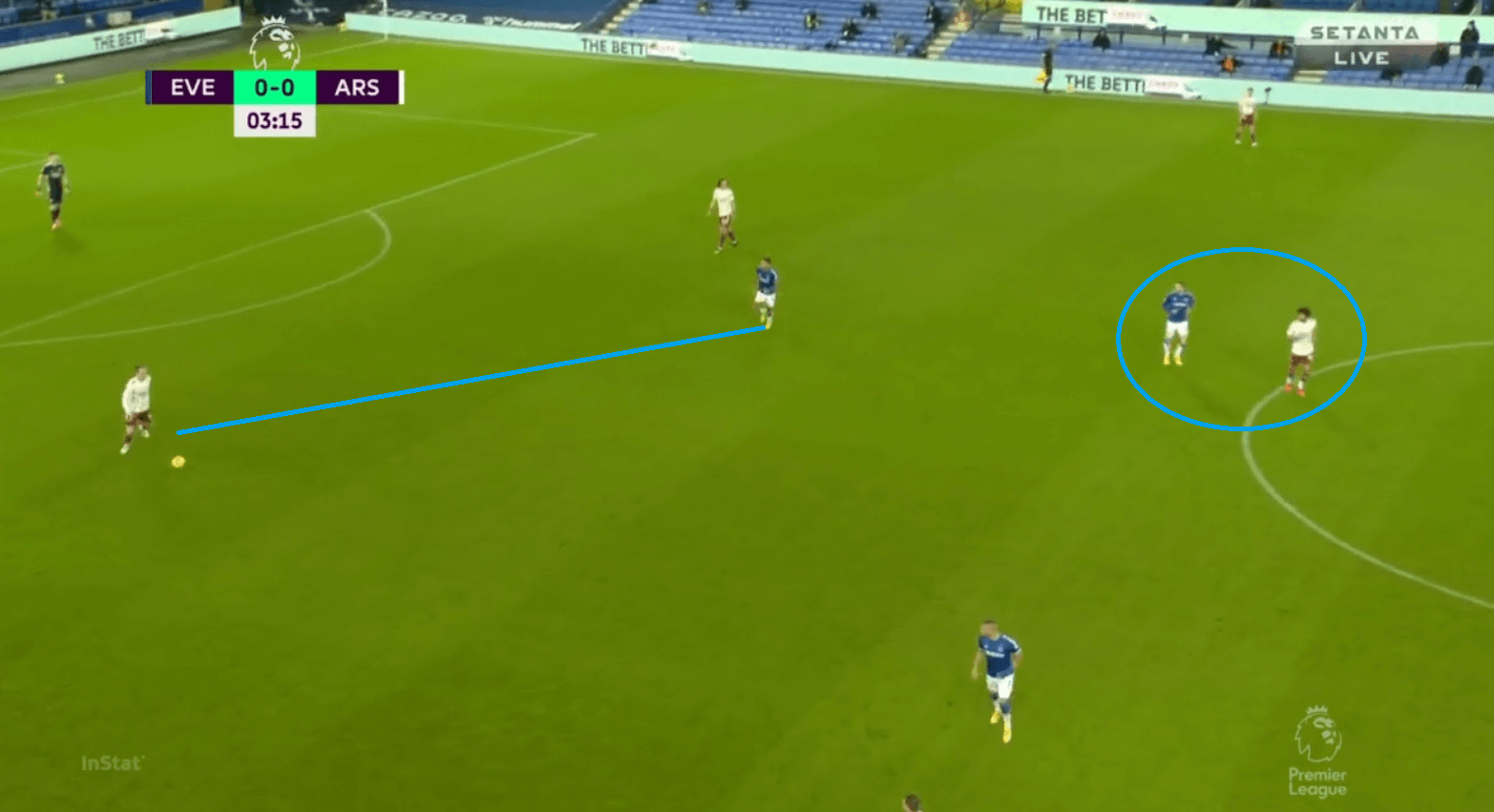 Ancelotti also committed Davies higher when Arsenal were overloading the zone Sigurdsson occupied, leaving him two men to commit to. Davies couldn’t move very high too and Arsenal hence were able to manipulate Sigurdsson again in deeper areas. Davies pushing higher meant that Doucoure in this defensive phase was deep and he was marking Willian who constantly dropped into the half-spaces. Doucoure’s box-to-box ability here works very crucially to the plan of Ancelotti. After the goals, they defended deep and were constantly forming lines of four players to stay compact and deep. This gave them opportunities on the break as they countered and offered a threat.

Everton maintained their lead and held on to win and grab the 3 points against another London team this season. Despite missing key contributors, Ancelotti has managed to extract some good performances from makeshift players in another big game. Arsenal’s winless run is now at seven games and the pressure keeps piling up on Mikel Arteta after another poor performance.