With three games left to play in the competition, the battle for European places in the Premier League becomes more and more interesting. While Liverpool and Manchester City establishing their places as the first and second-best teams in England, the other five teams in the top seven keep going up and down the league table with each passing game.

Chelsea and Leicester were the obvious candidates for the other two Champions League spots, but their bad runs of results since the restart opened the opportunity for clubs like Manchester United and Wolves to get into the contention. Chris Wilder’s Blades are also dreaming about playing in Europe next season, and the game against Chelsea showed their ambitions. Sheffield United cruised to victory in a great fashion, scoring three goals with David McGoldrick finally breaking into the scene.

In this tactical analysis, I will look into Wilder’s great defensive tactics, the inability of Chelsea to break down the defensive block and how changes from Lampard in the second half didn’t alter the outlook of the game.

Chris Wilder stuck with the same lineup he used in the game against Wolves, only with Sharp making a place for McGoldrick to play alongside McBurnie. As in most games this season, Sheffield United went with their 3-5-2 formation.

Frank Lampard, on the other hand, made two changes compared to their previous game against Crystal Palace: Jorginho came back into the lineup after a long spell, replacing Gilmour, and Abraham replaced Giroud in the striking position. 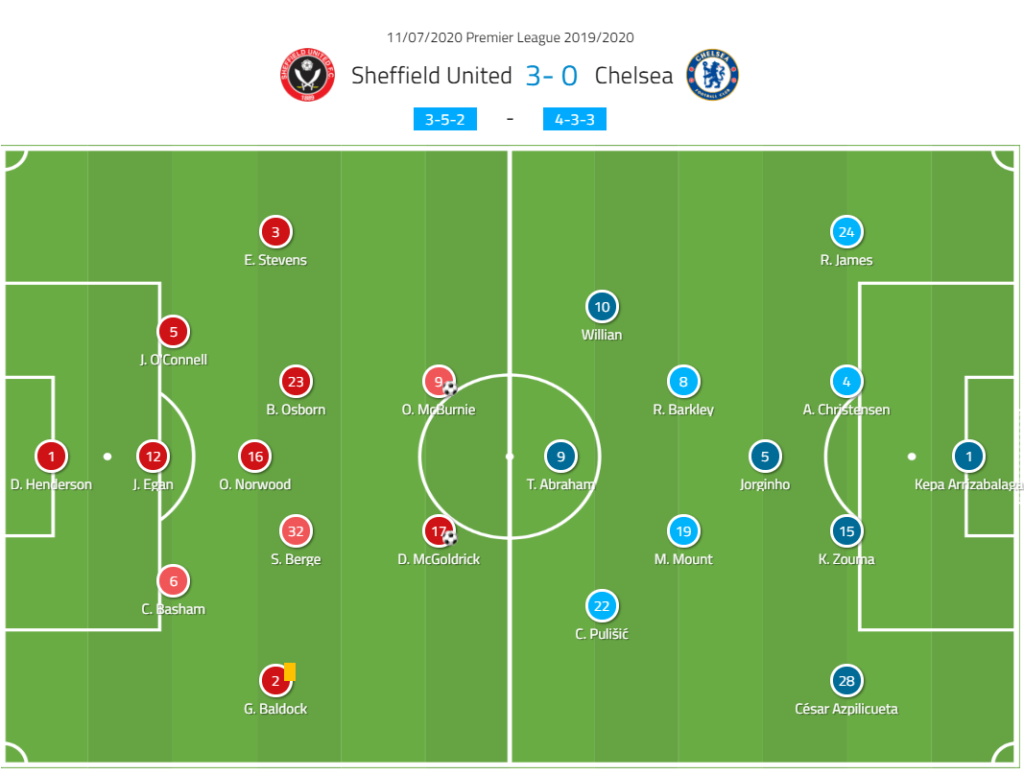 At the end of the day, Chelsea recorded 76% of possession, however, they had not managed to create anything meaningful out of that massive amount of time on the ball. The return of Jorginho into the lineup implied a lot of possession for the visitors. The other two players in midfield, Barkley and Mount, couldn’t replicate what they did in the previous game against Crystal Palace, and that is progressing the ball through their runs. Also, having both these players as 8s in this match meant the possibility of positional rotations with the wingers, Willian and Pulisic.

We’ve seen this pattern in previous games when wingers moved inside when the 8s drifted wide, and it happened in this game as well, but with less efficiency. The hosts’ aggressive man-marking approach limited the time on the ball for the Chelsea players to receive and play through.

The pair of centre-backs in Zouma and Christensen were positioning wide, and Jorginho was isolated on his own for the entire game without much help. McGoldrick and McBurnie were focused on the centre-backs, alternately switching on to Jorginho when the ball was leaving the feet of Zouma and Christensen. In the first half, two central midfielders in Osborn and Berge were marking the full-backs when they received the ball, as shown in the image below. Hence, James and Azpilicueta were forced to play long under pressure.

The desire of Sheffield United to trap Chelsea on the flanks and force them to give away possession worked successfully, with the visitors constantly looking to play through the wide areas. In the shot below you can see one of the examples of such a flank-oriented press from Sheffield, with four players committing to one side of the pitch, forcing James to play long. With Osborn and Berge jumping at James and Azpilicueta when they received the ball, it also forced Chelsea to wastefully circulate the ball around the backline quite a lot, with no real help from wingers and central midfielders. Jorginho is known for his qualities of playing under pressure, and he helped his team to maintain possession, but I think they’ve missed Kovacic in this game.

With the Italian operating as a single pivot, Chelsea were limited in the build-up phase, because playing through the flanks with Sheffield double-teaming the wingers in constrained spaces, even if Chelsea advance the ball, was not a good way to create chances by any means. Kovacic would’ve offered one more dimension to Chelsea’s build-up with his ability on the ball and different passing style compared to Jorginho. With these two playing in a double pivot, the team would’ve exploited their attacking patterns more efficiently in the final third.

In order to support Jorginho in the centre, either Pulisic or one of the central midfielders would drop deeper to offer a passing option. However, the receiving player was heavily marked by the opposition, and thus his only opportunity was to make a back pass. Here you can see Pulisic dropping deeper to receive the ball from Zouma, but he is being pressured from behind and forced to play to the flanks.

These difficulties created from Chris Wilder’s side made Chelsea rely more on long balls, and also on the direct play to Abraham as a way of getting forward. The 22-year-old striker was useful in terms of linking up the play, with his body strength and pace coming in handy against Sheffield United centre-backs. Throughout the course of the game, he created a couple of opportunities for his team to play through, as you can see in the image below. Abraham holds on to the ball and then lays it off to Mount on the right. Aggressive pressing from the opposition didn’t allow to take more advantage of these situations, because even though the pass to Barkley seems possible in this shot, Egan stepping out of the defensive line shuts down that passing lane. Here you can see another example of rare attacks created with the help of the Chelsea striker, getting the ball over to running Pulisic after a long pass, with the American running into a brick wall of centre-backs seconds later. While the Chelsea wingers were mostly oriented to play wider and preoccupied with supporting the build-up, Abraham struggled to create open positions for himself to get into, and you can’t really blame him due to the lack of service he got. Some other constraints, such as right-footed Azpilicueta deployed as a left-back and the general sloppiness of attacking players in the final third, expressed in bad passes and receiving touches, left Chelsea without real chances in the first half. In the next section of this analysis piece, we will see what changes Lampard brought on for the second half and whether they had a big impact on the look of the game.

Changes in the second half from Chelsea

For the second half, Lampard switched his formation to 3-4-3 with Mount and Christensen coming off and Alonso and Rüdiger coming on. Azpilicueta started playing as a right-sided centre-back, and with him and Alonso on the left, Chelsea had two good crossers down both flanks. This change of formation also was also meant to create more favourable conditions for Jorgihno, who was playing in a double pivot together with Barkley from that moment on. Despite the bright start of the half, the players didn’t manage to turn things around in their favour.

Now with more cover provided for Jorginho and the constant presence on the flanks from Alonso and James, Chelsea were looking to play through the defensive block of Sheffield United. The aggressive press from Sheffield can be used against them too, with enough movement between the lines from wingers and 8s. In the second half, Berge and Osborn were marking Chelsea’s wide centre-backs, and here you can see Berge jumping at Zouma, who has only one forward passing option – to Willian on the left. Alonso forces the defender to step out of the line, and more movement from Barkley(dropping deeper to receive) and runs into vacated spaces from Abraham could’ve help Chelsea to get more chances out of their time on the ball. Chelsea had the opportunity to play between the lines, especially with a ball-playing centre-back like Rüdiger coming on. You can see one of the in-game situations in the image below, with Pulisic and Barkley between the midfield and defensive lines of Sheffield United. Despite this, players did not stop sticking to a more conservative approach, perhaps keeping in mind the danger of losing the ball in those areas under the pressure. In the second half, Chelsea had more people targeting the penalty area with their runs, especially since the introduction of Giroud. Below you can see that, with five players making runs into the box. However, Sheffield United were able to cope with this increased presence in the penalty area, and the Chelsea strikers only got a couple of headers off in that period.

Despite having only 24% of the possession in the game, Sheffield United players made great use of it, netting three goals. In their periods of sustained possession, they played in their easily recognisable manner, with a lot of positional rotations on the flanks and with centre-backs making runs into the final third.

Sheffield United only had a couple of attacks in the first half which ended up in a shot. Below you can see a snapshot of the play before the goal, with Stevens playing quick one-two combination with Osborn. This simple exchange of passes cut off two Chelsea players and created an open crossing position for Stevens, who found McBurnie in the box.

Under the pressing from Chelsea, the hosts looked to establish possession in the final third after long balls from centre-backs and the goalkeeper, and then go from here. As I’ve mentioned, players tried to execute their usual game patterns on the flanks, and you can see one of the examples below. O’Connell joins in on the left, McGoldrick drops while Stevens moves into vacated space, and Lundstram is able to find him in the box. Sheffield United adhered to their attacking strategy which worked wonders this season, and even with less time in possession than usual, they were clinical with their chances. Chelsea often looked vulnerable in transitions, which was exposed a couple of times by the Blades, who actually got a lot of big chances and had the opportunities to score more than they did.

Jorginho is brilliant playing under pressure and he is great at finding open zones, but his composure defensively raises questions. He became the target for long balls from Henderson in this game, and McGoldrick was able to keep possession a couple of time for Sheffield after an aerial duel with the Italian. The forward was also the one who single-handedly created a lot of big chances, including the final goal, for his team after 1 v 1 duels against Jorginho. Below I illustrated one of those moments, with McGoldrick putting Mousset 1 v 1 against Arrizabalaga after a bad touch from Jorginho.

Matches like this show that in order to make the best out of him, it’s important to provide cover. Kanté fits perfectly into this role, however, then there is a risk of the same useless possession time like we saw in this match. Jorginho’s tandem with Kovacic in the first half of the season was great from an attacking standpoint and not so much from a defensive one, but in my opinion, it’s a better version of Chelsea midfield than what we saw on Saturday.

The win over Chelsea meant the end of a very impressive run from Sheffield United against London clubs: six wins and four draws in ten games. The defensive masterclass shown by Chris Wilder’s men also meant that Chelsea could drop into the fifth position if Leicester and Manchester United win their respective games. Both teams have tough opponents left in the remainder of the season, and I am pretty sure we will see the battle for top four unfold until the very end.