The most highly anticipated match of the Premier League fixture list this weekend saw league leaders Liverpool travel to the Tottenham Hotspur stadium in search of another win. Any game involving a Mourinho side against a side that you would consider superior sets up an interesting tactical battle, and this game was no different. Mourinho’s approach was typical Mourinho, which did cause him to face some in my opinion, unwarranted criticism. Mourinho’s tactical set-up was set out to nullify Liverpool and in large parts in terms of build-up, it did. In this tactical analysis, I will analyse the flaws and benefits within Tottenham’s defensive system and look at how it affected Liverpool’s build-up play.

Liverpool lined up in their usual 4-3-3 and stuck to their typical build-up structure, while Tottenham’s shape fluctuated often between a 4-4-1-1, 5-4-1, 5-3-2 and a 4-5-1 depending on the position of the ball and position of Liverpool, as I will cover in detail throughout this analysis. 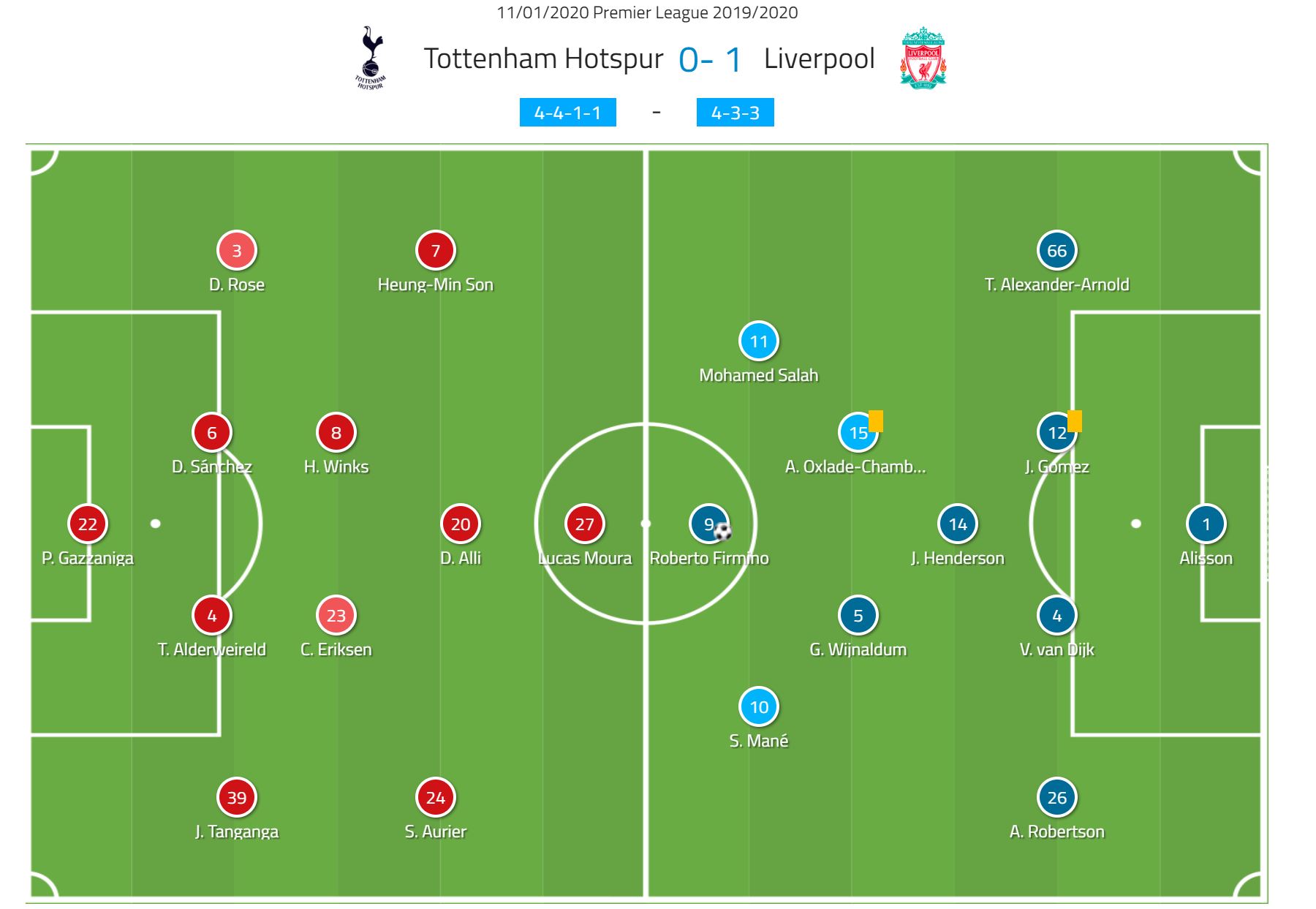 Tottenham employed an asymmetrical 4-4-2 or 4-4-1-1, with Serge Aurier being tasked with marking Andy Robertson regardless of his positioning. Therefore, if Robertson was slightly deeper, Tottenham went into a fairly conventional 4-4-2, and if Robertson pushed higher as we can see in the image below, Tottenham went into a 5-3-2, which could go into a 5-4-1 depending on the positioning of Dele Alli. This meant that Japhet Tanganga often was tasked with dealing with Sadio Mané in the half-space.

In this example below, Tottenham are in their 4-4-1-1 structure with Aurier tracking Robertson backwards. This allowed for Tottenham to prevent Liverpool creating overloads around the right full-back using their inside forward and full-back, and therefore helped to halt Liverpool’s build-up.

The average position map of Tottenham highlights this shape well, with the left-hand side duo of Heung Min Son and Danny Rose clearly operating differently than the right-hand side of Aurier and Tanganga. Tanganga’s extremely narrow positioning shows the threat Mané posed in the half-space, which we’ll cover in the next section. 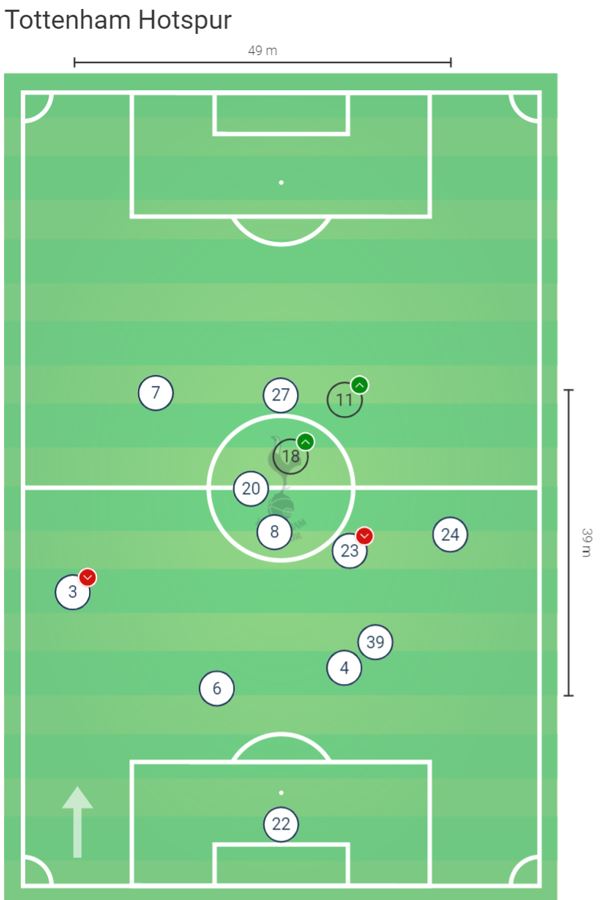 Part of the reason I believe Mourinho set up asymmetrically was down to Liverpool’s shape in the build-up. Liverpool’s build-up often involves central midfielders dropping deeper in order to allow for the full-backs to push forward and occupy the wider areas. Without Fabinho, Jordan Henderson now occupies the six and as a result one of Liverpool’s number eight positions opens up, and in this game was occupied by Alex Oxlade Chamberlain. This edits Liverpool’s build-up structure, as going down the left Gini Wijnaldum often drops into the position we can see below, allowing Andy Robertson to push forward and pin back Serge Aurier. This forces a Tottenham central midfielder to press Wijnaldum, but the back five and coverage along the backline forces Mané to drop deeper to look to receive in the half-space.

While Wijnaldum drops to receive the ball and aid the full-back, the opposite eight, Oxlade Chamberlain, looks to receive the ball in space on the diagonal, threatening to get in behind the midfield. As a result of this advanced position from Chamberlain, if Liverpool couldn’t progress down the left and looked to go the other way down the right, they struggled to get a player into a position to allow the full-back to advance. We can see this below, where a switch of play with short passes leads to Gomez playing the ball to Alexander Arnold, who is therefore positioned deeper due to no midfielder being available to receive. Oxlade Chamberlain prefers to stay in the position he is seen in below, and therefore Liverpool struggled to build down the right in their conventional method.

Some basic forward passing statistics back this up, with Oxlade Chamberlain completing only three of his eleven forward passing attempts, compared to Henderson and Wijnaldum who completed 17/21 and 14/15 passes respectively. This I’m sure is one of the reasons Jürgen Klopp decided to substitute Oxlade Chamberlain in the 61st minute for Adam Lallana.

This meant that Liverpool were ultimately playing into Spurs’ hands, by attacking the left side (Spurs’ right) which was structured asymmetrically to defend them. Spurs were set up to defend the left side with Aurier as a ‘winger’, but on the opposite side, Spurs weren’t as strong defensively and didn’t even have a consistent winger on that side, with Son and Alli rotating. This meant that much of the game was structured like this example below. 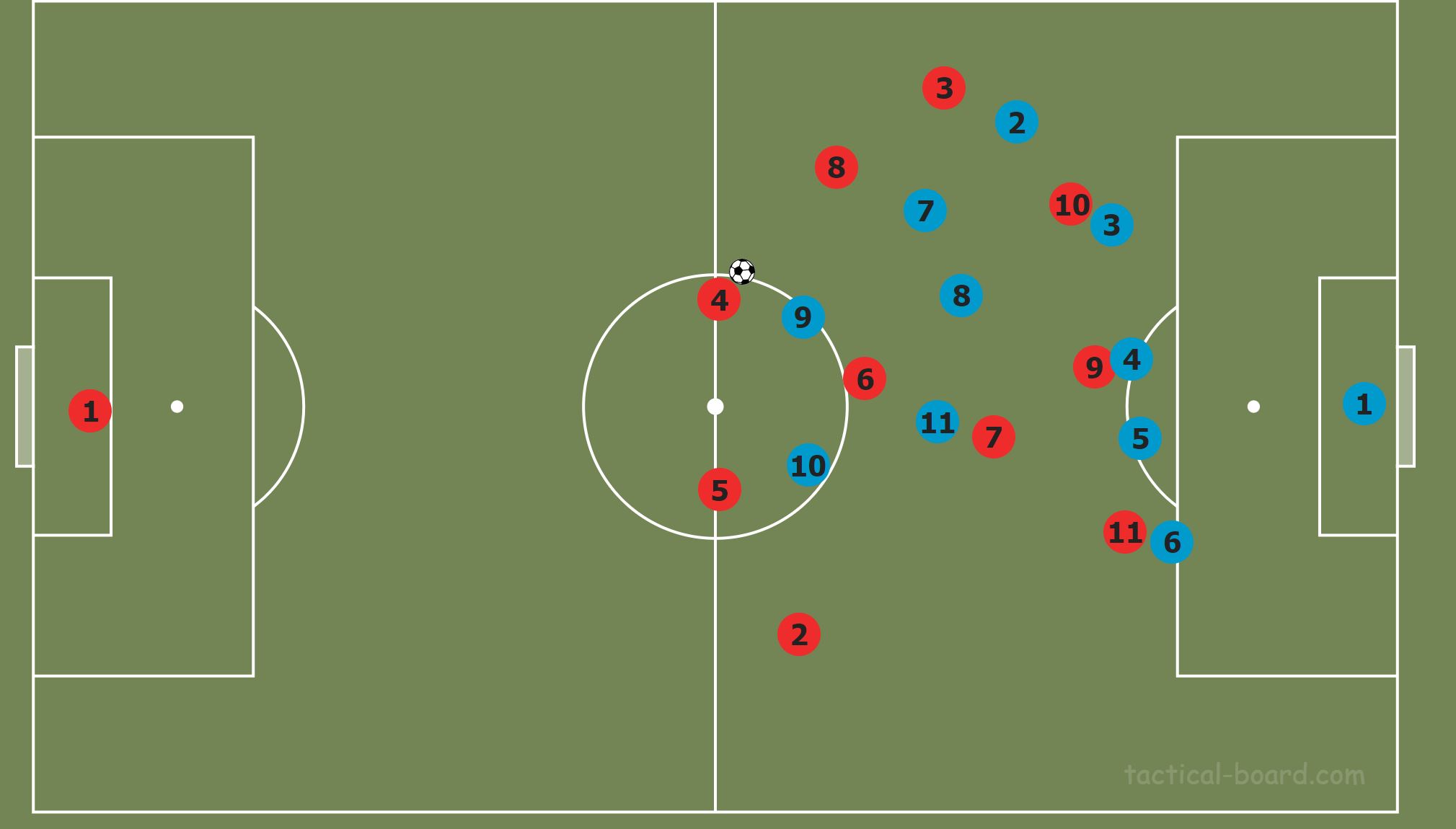 In the rare times Liverpool did get the ball into a central midfielder on the right, they were often not wide enough or Alexander Arnold was too deep, which impacted their progression. Below, Liverpool are in a decent shape and we can see the difference in Spurs’ shape, with no wing-back specifically marking the full-back and therefore sitting in a 4-4-2. Using this side more often would therefore have allowed Liverpool to work an overload more easily, with Alexander Arnold able to receive in a higher position and the inside forward and Firmino able to overload Rose. If Tottenham had instructed Son to mark Alexander Arnold in the same way Aurier did on the other side with Robertson, it would leave Salah vs Rose, harm Son’s ability in transition, and also give another disadvantage which I will cover in the next section.

Despite effectively playing into Tottenham’s shape, Liverpool still had the quality and technical ability to work chances and score a goal, and should have scored more particularly in transition.

It’s also worth noting that the structure doesn’t have to involve the central midfielder dropping into the wide area next to the centre backs, and that many rotations are possible, but again down the right, due to Liverpool’s preference to use Wijnaldum down the left and Chamberlain’s preference to stay in the middle, most of the rotations happened on the left, as we can see below.

Here, Robertson and Wijnaldum perform the first rotation, where Robertson picks the ball up as the deepest player and Wijnaldum now occupies the wide area. Firmino then moves deeper into Mané’s usual space, and Mané therefore pushes forward to enter Firmino’s space, allowing Liverpool to lose any markers and create space. The first example within the counter-pressing section of this analysis also shows some extreme rotations from Liverpool in this phase.

This next motivation below to create space sums up the brilliance of Roberto Firmino. He has a quick scan to look for Salah, and then makes a decoy run towards the ball, taking his marker with him.

This creates space for Salah to receive the ball in the space previously occupied by Firmino, who is then ready to turn and receive the pass from Salah. Liverpool can then get into a position to cross the ball and get a shot worth 0.23 xG. Salah’s intelligence to recognise what Firmino is doing should also be recognised.

The first half saw Tottenham’s midfield struggle and become increasingly less compact, which demonstrated Mourinho’s lack of suitable options in the midfield. Within their compact 4-4-2, Tottenham looked to keep Liverpool in wide areas and prevent them from advancing, however, Liverpool were able to find spaces through the middle due to some poor defensive awareness from Tottenham’s central players, and due to the previously spoke about positioning of Oxlade Chamberlain.

Part of the reason Liverpool were able to find extra space in central areas was due to that Tottenham shape previously mentioned. When in a 5-3-2, Spurs were better able to protect the wide areas and half-spaces due to the presence of a wing-back, but struggled to prevent passes through the centre or switches due to a lack of coverage in the middle, with that midfield three easily stretched with the ball in wide areas. Oppositely, if Spurs were in a 4-4-1-1, theoretically they would lose that coverage of the wide area but would become more solid centrally.

We can see this below with the ball coming from a wide area and starting with the central midfielder dropping deep for Liverpool. Tottenham actually track back into a 5-4-1 here, but still leave space in the middle. Eriksen acts as the wing-back in Aurier’s role, and moves out to press Wijnaldum. Mané drops to receive in space, and is then pressed by Aurier who is effectively acting as a central midfielder due to his rotation with Eriksen.

Mané gets round Aurier and Alli switches off, still scanning to his left now instead of closing the gap into Oxlade Chamberlain behind him. Mané has the quality to find Oxlade Chamberlain, and Alexander Arnold can join the attack for Liverpool and create an overload on Danny Rose, but Liverpool don’t take advantage.

In a very similar situation again Liverpool are able to progress through the middle. Wijnaldum again is in that deeper role and Mané drops to move away from his marker Tanganga. Alli again scans to spot Oxlade Chamberlain but again, scans too late and Mané quickly exploits the space.

In this final example slightly higher, we can see Tottenham’s midfielders lack of defensive awareness again, this time Eriksen. There is no immediate pressure on the ball from Tottenham, leaving Alexander Arnold room to find any forward pass, and Eriksen covers Wijnaldum despite the passing lane being cut to him. Eriksen scans, but again it’s far too late and Liverpool can pick the pass out to the dropping Firmino.

Liverpool’s usually excellent counter-pressing was on show again in this game, and this combined with Tottenham’s shape allowed Liverpool to limit Spurs in transition. This individual ability Liverpool’s players have to win the ball back is underpinned by the structure they take up, and here, despite the extreme rotations seen Liverpool still maintain their shape. Firmino drops into the wide central midfielder role while Wijnaldum is the widest player and Robertson is the highest player. Despite this, Liverpool still surround the ball and have two players immediately available to press the ball from the front when it is lost.

Again here, we see the same structure which stems from the build-up structure previously mentioned. Immediate pressure on the ball cuts the passing angles for the ball carrier and forces the ball carrier towards the touchline, and there is cover behind this immediate pressure from the two central midfielders. Henderson could move slightly further forward to deal with the threat of Eriksen, but he is still in a position to apply pressure, and Wijnaldum’s positioning and awareness of space allows him to intercept the ball eventually.

After 77 minutes, Liverpool started to look fatigued with some poor moments in the game which Spurs nearly capitalised on. Liverpool looked unusually passive and allowed Spurs to get around them and win duels, which I’m sure is the reason Klopp wasn’t fully satisfied with the performance.

If not for a few sloppy mistakes and perhaps some better finishing Liverpool would have been very happy with their performance. They had chances to put the game to bed and created chances in transition and in tight spaces against a tricky Tottenham side. It would be easy for people to come to the conclusion that Tottenham should have approached the game more offensively and pushed higher because of those last 13 minutes, but in truth, I thought Mourinho’s defensive tactics were largely effective, despite Tottenham not possessing a squad fit to play his style of play at the moment. Liverpool thrive against teams that push higher and allow space to transition into, and due to Tottenham’s defensive fragilities in midfield, I doubt Mourinho wanted to risk pressing Liverpool too highly, for fear of giving away those transition opportunities. All in all, the result reflected the nature of the game, but Mourinho wasn’t far off getting a point with what would have been a well-executed game plan.