The midweek encounter between Montreal Impact and Vancouver Whitecaps folded out into an interesting clash where the host side managed to keep the three points at home even after the Whitecaps grabbed the lead.

As the MLS 2019 regular season is entering to its final stage, every team is looking to get the best results. This can be one of the main reasons behind the fact that Montreal Impact sacked Remi Garde and replaced him with former Houston Dynamo coach, Wilmer Cabrera. Truth to be told, the improvement is highly needed in Montreal.

Meanwhile, Vancouver Whitecaps are having an awful season as they are 12th in MLS’ Western Conference.

This tactical analysis will look into both sides’ tactics and the approach that they applied for this clash. 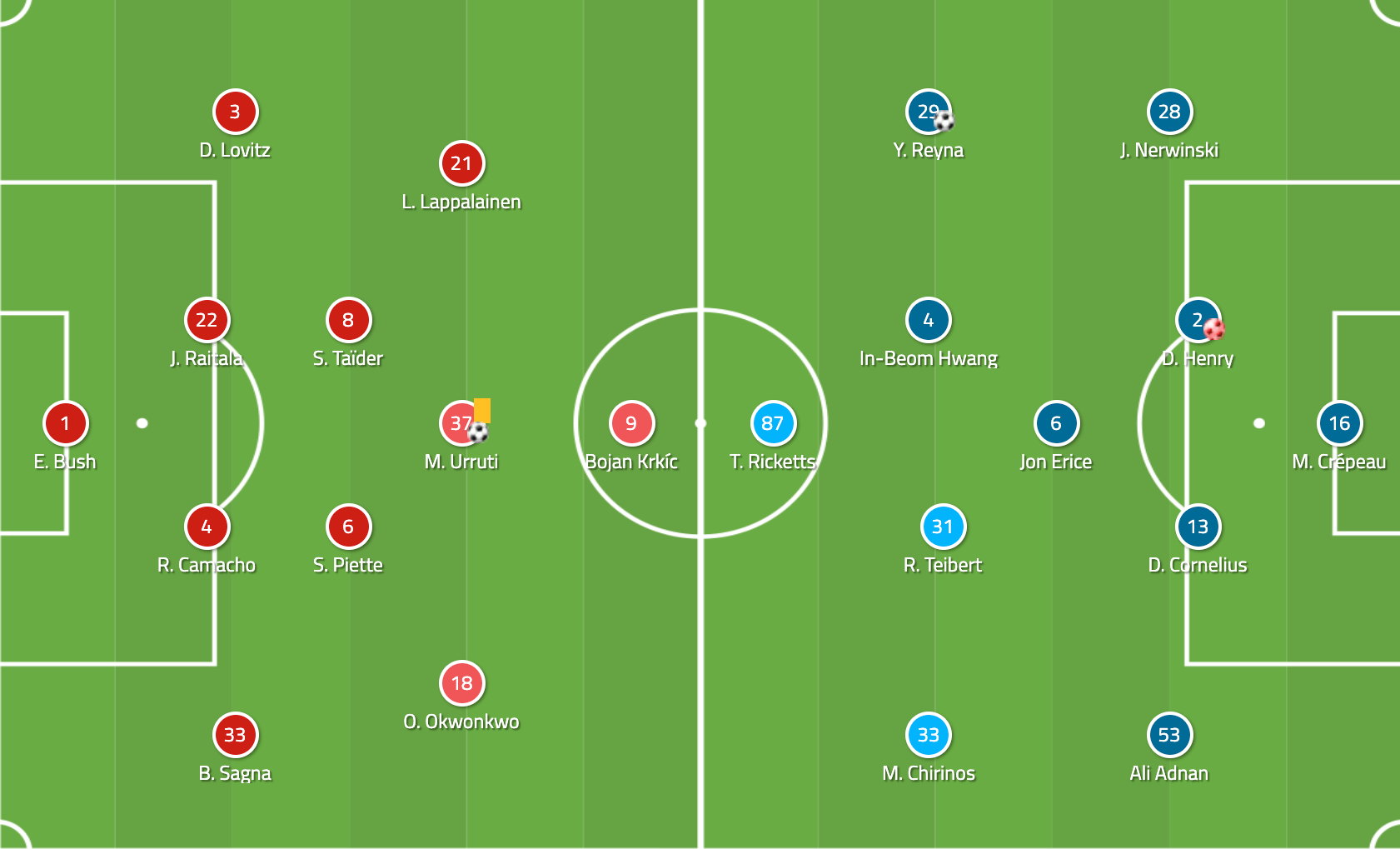 Besides the minor switch to 4-2-3-1 formation from 4-4-2, Cabrera made some changes in personnel for rotational purposes. In the defensive department, Bacary Sagna moved to right-back position and Rudy Camacho replaced him at the heart of the defence. Samuel Piette paired up with Taïder instead of Ken Krolicki and on the right-wing, Orji Okwonkwo got the nod.

Usually, Marc Dos Santos deployed a 4-3-3/4-3-2-1 system but this time, he chose his third most used setup, the 4-1-4-1 formation with several changes in the team selection.

Vancouver’s intensity in the beginning

A clear indication of a team’s intention is whether they are passive or active in pressing. In this case, it was easy to identify this behaviour due to Vancouver aggressive mentality against the ball. The guests started with an intense pressing in the opening minutes. They formed a 4-1-4-1 shape and looked to force the opponent to one side and isolate them there.

To achieve that, the first line, Tosaint Ricketts positioned himself between the centre-backs and once one of them received the ball, he pressed the ball-carrier while blocking the pass route to the other central defender.

Furthermore, they stayed high up and pressed the opponent even after a lost ball. For example, throw-ins were important as they almost doubled their lead from a penalty after they stole the ball in a throw-in situation and initiated a counter-attack. And this was not an isolated occasion. With this approach the Impact were able to put the home side under pressure.

Vancouver Whitecaps on the ball

Thanks to the intense pressing, the Whitecaps had the ball 61% of the time in the whole game. When they attacked, the players did not stick to their position and roamed freely which often resulted in the overloading of an area.

The away team looked to overload the wings. Here, for example, Vancouver played on the left-wing and the teammates shifted there to offer the pass option to the ball-carrier and create pass combinations to break through the opposition’s 4-4-2 defensive block.

Another strong element of Vancouver’s attacking phase was the counter-attacks. The guests created a couple of chances through it, although they were too ineffective in the finishing.

As I mentioned earlier, Vancouver pressed high up which made it difficult for the home side to progress up the pitch. Against this press, Montreal circulates the ball relatively patiently until they found a way to progress. To help the circulation, both midfielders, Taider and Piette stayed deep to offer a central option. With this deep positioning, they created a middlebox as the image below highlights.

Vancouver also used a ball-oriented midfield press, which evident in this instance above. In reaction to the ball being sent to the nearest midfielder, the nearby opponent immediately pressed him. It forced the ball to Taïder who was also met with a high press. As the ball travelled to Camacho, it dragged the Vancouver players out of positions which opened up a pass route that Camacho exploited.

This created issues further up the pitch since there was only Bojan Krkić who positioned himself in between the opposition lines. However, as the game wore on, Taïder started to occupy higher positions, especially in the second half.

We may see in the image below how Montreal’s staggering at the back changed into a 2-1 which means only one midfielder stayed deeper to offer pass option to the two centre-backs. This allowed more players in behind the opposition midfield line.

Furthermore, to beat the opposition midfield press or deeper press, Montreal used an interesting pattern. The image highlights it below. The Impact sent a vertical pass to Lassi Lappalainen in a pocket of space in the opposition line which instantly attracts pressure. Due to the high pressure, he laid it off to the nearby teammate. Piette then switched to the far side, to the open man. This is very similar to the tactical concept of up, back and through.

The Montreal Impact looked to play through the wings. There are two main reasons for this. Firstly, when the Impact passed centrally the away side instantly pressed the receiver, therefore, it was difficult to access the middle. Secondly, the home side formed a wide formation in possession, namely a 4-2-4 shape or 2-4-4.

Moreover, one of the interesting patterns of play was the switch of play. In the final third, they tried to play the ball to the penalty box, however, Vancouver’s 4-5-1 deep block made it very difficult to break down. In the instance below, they circulated the ball from the left side to the right in front of the opposition lines. On the far side, the right-back received the ball in an open space.

With this play, the Impact could exploit the opposition defence, as they did on a few occasions.

A common pattern in both teams’ play and recent performances is their poor finishing. Frankly, both need to do better in front of the goal, especially the Montreal Impact who still has a chance in this MLS season to achieve something, for example, at least reach the playoffs.

Although Vancouver Whitecaps suffered another loss, they showed some positive tactical wrinkles as this analysis showed. They were unlucky when they had to repeat the penalty and the second attempt saved by Evan Bush. Overall, another decent performance ending in no points for the visitors.