Perhaps the biggest surprise to happen in La Liga last matchday was Atletico Madrid losing to Levante at the Wanda Metropolitano. Even though Diego Simeone’s troops are still firmly in control of that first place in the table, it seems we’re getting a race in Spain after all.

Still, with Barcelona stumbling once again too, it were Real Madrid who prospered the most from the latest set of games in the domestic league. Cholo’s team have faced Levante twice within a weak and have only managed to record a draw and a defeat, thus unnecessarily complicating their otherwise dominant situation.

This tactical analysis will aim to dissect both teams’ tactics and tell you just how Levante got the better of Atlético Madrid.

Interestingly, the two teams faced each other before this clash and there weren’t that many crucial changes in the hosts’ squad. Atletico Madrid were deployed in a 3-5-2 formation with Mario Hermoso, Felipe and José Giménez in front of Jan Oblak. In midfield, Koke and Marcos Llorente were joined by Geoffrey Kondogbia while Renand Lodi and Ángel Correa manned the flanks.

Up top, Simeone opted to go with the familiar tandem of Luis Suárez and João Félix, who was back in the gala XI. 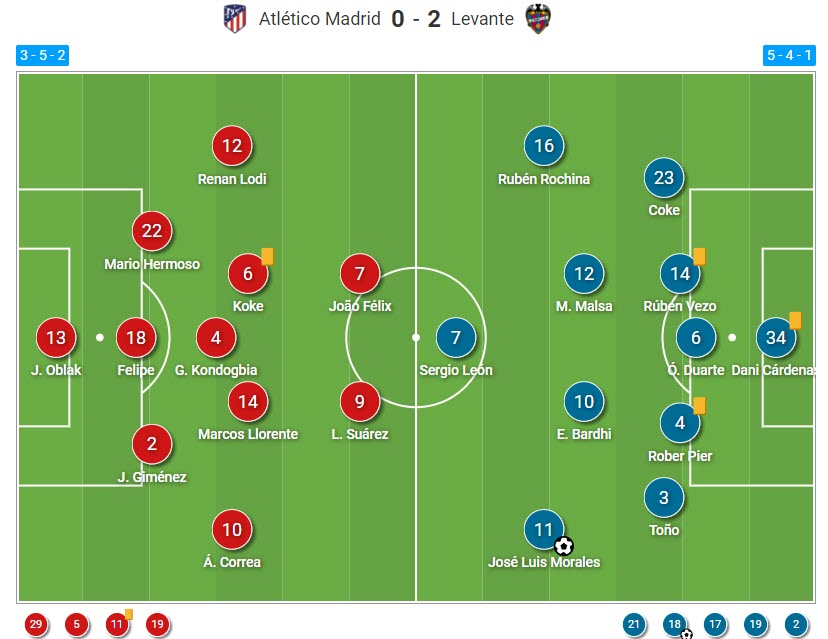 Levante, on the other hand, made a lot of changes from their midweek clash with the same opponent. This time, the young Daniel Cárdenas was in goal, replacing Aitor Abarisketa, and only four players from the last lineup returned to face the Rojiblancos again.

Paco López decided to bring in fresh legs, changing everyone except Rober Pier, Mickael Malsa, José Morales and Enis Bardhi, all of whom featured last Wednesday as well. Levante were deployed in a 5-4-1 formation.

With just a +1 goal difference so far in this La Liga season, we can’t exactly say that Levante have been a highly effective defensive team. In fact, with an average of 1.55 xG against and 1.24 goals conceded per 90, they should be conceding more than they currently are. They seem to be among the teams who know how to create chances but are also susceptible to conceding quite a few.

Against Atlético Madrid, however, their defensive tactics managed to see them get away with a 0-2 win and a clean sheet despite ending the game with 2.33 xG against and only 0.54 xG. And as we’ll touch upon later on in this tactical analysis, a lot of this is due to Atlético’s inefficiency in front of goal, but there were other aspects in play here too.

Let’s explore Levante’s defensive structure that frustrated the hosts throughout the game, especially the first half. In possession, Atlético Madrid would build with their trademark three in the back and usually a double pivot just in front. Sometimes, Kondogbia was the only one assisting the backline in progressing the ball forward as both Llorente and Koke assumed positions higher up the pitch. 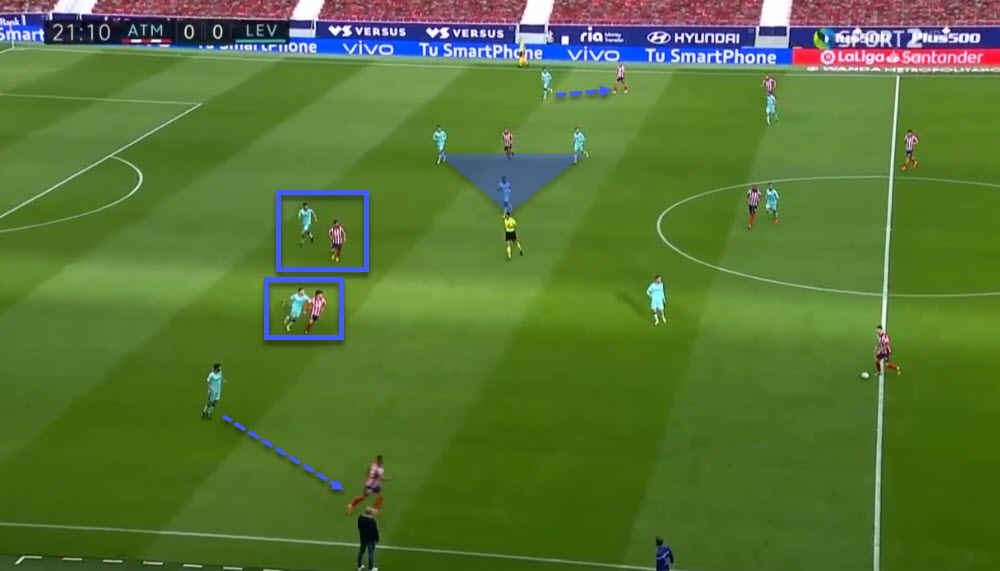 And this in itself was often the problem. Notice above how Levante have most of Atlético Madrid’s main pieces in attack tightly marked. Félix and Suárez have a marker on their back while as soon as the wide players, Lodi and usually Llorente, receive the ball, Levante’s full-backs would push up to contest it.

You can see a very similar situation in the image above. Levante are in a 5-2-3 defensive structure and have key targets tightly marked. Of course, man-marking tactics are very liable to manipulation but Atlético Madrid didn’t have adequate runners to make use of that liability.

And as the access to their main creators and danger men was shut, they had to drop players deeper to aid the progression of the ball. This can be seen in the following example below. 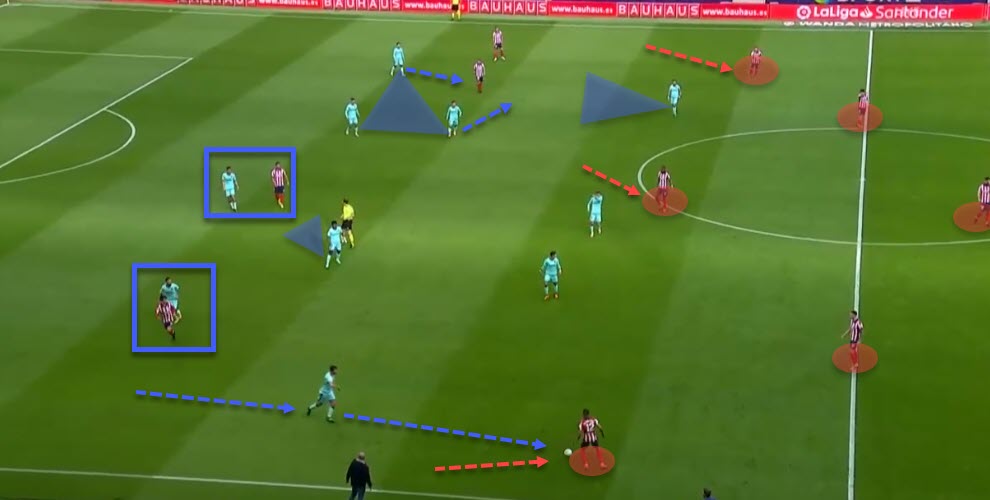 Notice that six home players are essentially behind the ball and beyond the opposition’s defensive structure. Again, the same tactics are applied as Levante stay tight to the primary targets and ensure they cannot get on the ball.

They also didn’t seem to be compact enough at times but Atlético Madrid simply struggled to make use of that properly, partly due to the lack of progressive and penetrative passes in their arsenal and partly due to not being able to access the ones that could unlock the block.

The image below shows us their progressive passes and passes into the final third on the night. We can see that there is a clear disconnect between the midfielders and the forwards.

None of Koke, Kondogbia or Llorente were able to reach the likes of Suárez, Félix or Correan often enough, resulting in the backline looking for them via long balls and diagonals behind the opposition’s backline.

This is also visible in the graphs above as well. But the issue was that without proper runners into those open channels, Atlético Madrid couldn’t do much to threaten Levante in the first half. And when they did create chances, it was through long shots, set-pieces or the aforementioned long and piercing passes.

But a big problem was in the position of one of their biggest weapons in attack, Llorente himself.

With nine goals and eight assists across all competitions this season, it’s safe to say that Llorente is Simeone’s not-so-secret weapon in attack. A lot has already been written and discussed about the change in his role as of late but against Levante, Simeone decided to deploy his midfielder out wide.

On paper, he was the right-sided midfielder in a midfield trident but on the pitch, he would provide the width and even act as the team’s wing-back just like Lodi on the other side. However, with him so wide and often far too deep in the first phase of the attack, Atlético Madrid lost an incredible outlet going forward.

Here are a couple of examples that show this issue quite clearly. 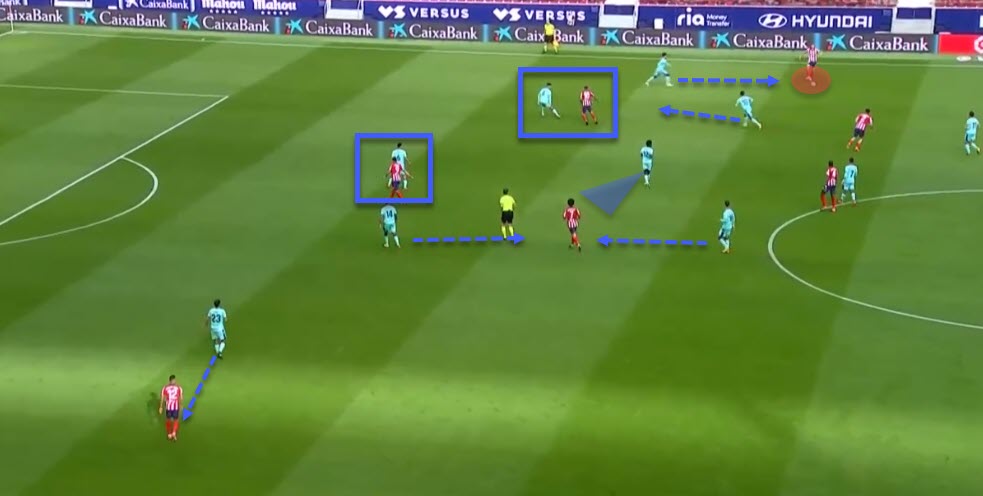 In the image above, we can see Llorente receives the ball far too deep on the pitch and he’s immediately man-marked by the opposition full-back. This, once again, is the same pattern we’ve mentioned earlier in this tactical analysis and these defensive tactics really paid off for Levante.

With the channels to progress the play closed and no space to run into, which he excels at, Llorente is forced into one of two options: go long beyond the opposition’s backline hoping someone gets on the end of the pass or recycle possession backwards, which is what usually happened.

Let’s look at another example down below. Again, Atlético Madrid are constructing their attack and we see some familiar patterns emerge. Firstly, with the usual players closed down immediately, the Rojiblancos are once more forced to drop multiple players far too deep on the pitch. 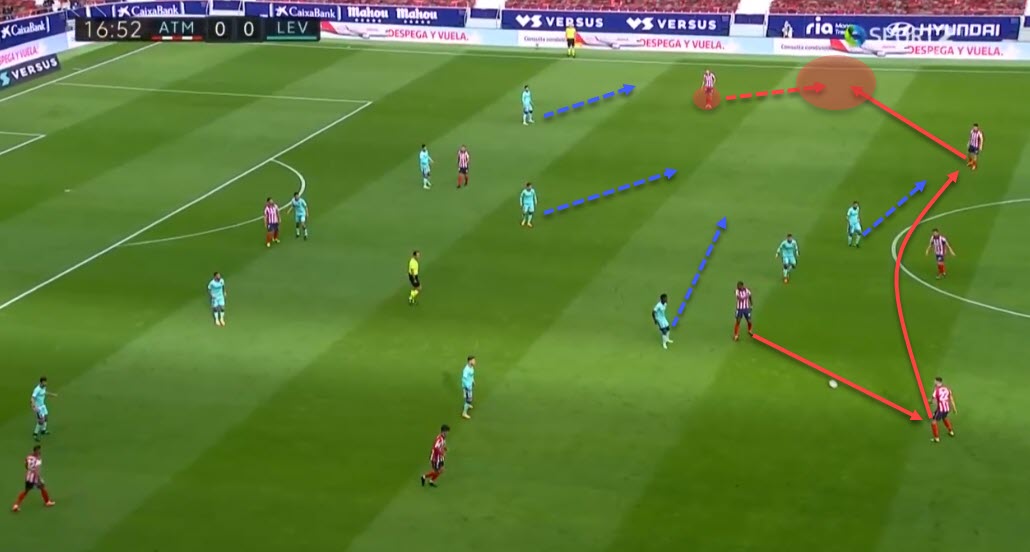 When they managed to recycle possession, it was far too slow to catch Levante off guard and by the time the ball reaches Llorente, he has to a) drop much deeper already and b) has all his progression chances snuffed out.

You can see in the following image that due to Atlético Madrid being too slow to switch sides and exploit the holes in Levante’s defensive structure, the guests have the time to reset and force Simeone’s men backwards. This is also why Llorente was one of the players in the graph we saw earlier who managed to connect with the forwards through long balls. 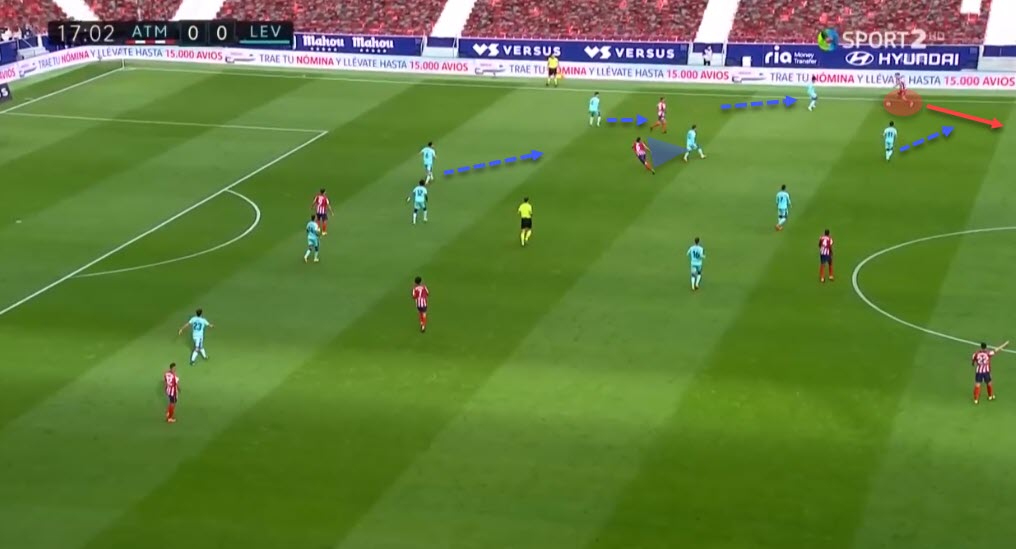 It wasn’t as much due to him finding them in excellent positions with great passes but rather being forced to look for them via switches and lofted attempts. However, Simeone did realise forcing Llorente into a quasi-wingback role was not doing him any good.

That’s why in the second half we saw him revert back to his more familiar role. On paper, he was now mostly a winger in a 4-4-2 or a 3-4-1-2 but on the pitch, we saw him in a more central role, often bursting through the right half-space or progressing down the middle. 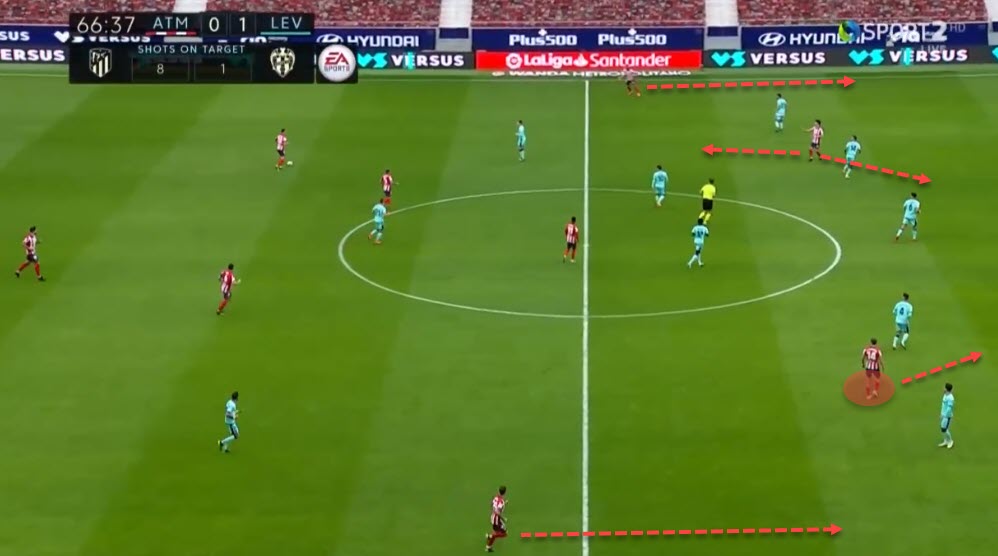 Despite all the difficulties, Atlético Madrid were still finding chances and creating quite a lot. However, wastefulness and an incredible goalkeeper on the other side got the better of them that day.

Sometimes it seems like a shallow analysis to say the goalkeeper made the difference in the end but for this game, it really did feel that way. Atlético Madrid were hugely inefficient in front of goal, accumulating 2.33 xG from 25 shots, 11 hitting the target too, but not scoring a single goal.

Levante, on the other hand, took six shots, two on target, and scored two goals along the way. Below, you can see the hosts’ xG map with all the shots. The red ones represent the ones on target and the white ones couldn’t hit the mark. 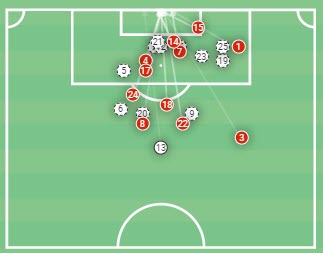 The map does tell us chance creation wasn’t that big of an issue for Atlético Madrid but converting those chances very much was. Levante, on the other hand, were once again quite shaky and, to a certain extent, quite lucky to survive with a clean sheet, let alone a win for their troubles.

But we have to mention the hero in goal, Cárdenas, a substitute keeper who registered 11 saves, five of which were reflex saves. We can see his efforts in the graph below and the young goalie really did have an outstanding match on the day.

Despite some good defensive tactics, Levante were barely hanging on in the end. The 0-2 result surely flatters them but this tactical analysis sought to explain some of the difficulties Atlético Madrid faced in attack.

Their inability to progress the ball cleanly, especially through their midfield, and the lack of running outlets in the forward line limited their options severely. When you pair that up with extreme inefficiency in front of goal, you get a very much underserved defeat but one that will surely hurt nonetheless.