Striking Early: How Pep’s defenders contributed to a clever victory by stretching a compact Arsenal

In what has been an inconsistent season, Manchester City have appeared to find an extraordinary level of consistency that sees them sit 10 points clear at the top of the Premier League. Arsenal, on the other hand, find themselves in the mid-table battle, 25 points behind the league leaders. Talismanic forward Pierre-Emerick Aubameyang has just eight goals in 21 games this season, with three of those coming in a single game against Leeds, and has struggled to find the form that has seen him challenge for the golden boot. For City, however, Pep Guardiola has lacked a striker for the most part of the campaign so far but regardless, have found a talisman in İlkay Gündoğan with the German scoring 11 goals in 19 appearances this season. It is still not too long ago that Mikel Arteta was at Guardiola’s side in the City dugout but with apprentice facing master, the onus was on either of them to show that they had other tricks up their sleeve. In this tactical analysis, we will highlight the crucial tactics that saw City score early and secure a 1-0 victory to strengthen their position at the top. 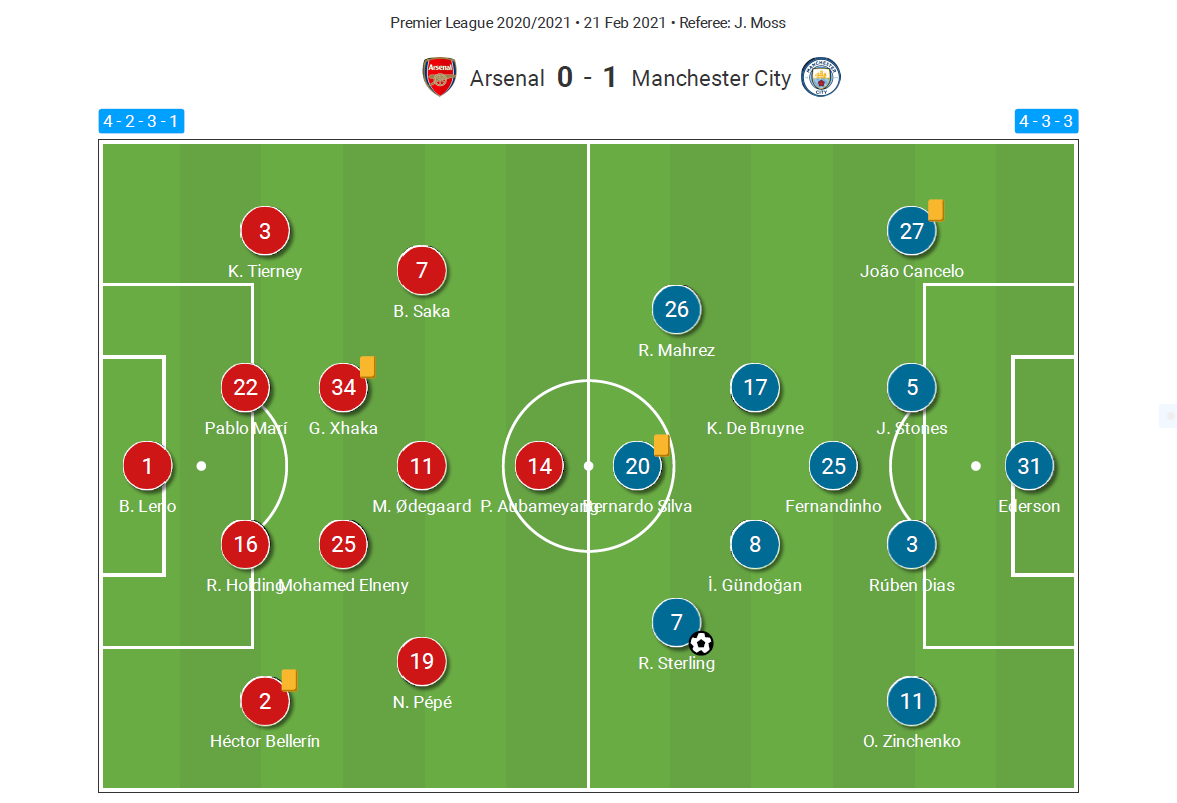 Arsenal started with a 4-2-3-1 formation, with Pablo Marí and Rob Holding the preferred centre-back pairing. Kieran Tierney and Bukayo Saka have been a crucial part of Arsenal’s side down the left-flank this season and loanee Martin Ødegaard started as well. Aubameyang led the line and would have been looking to continue his recent goal-scoring form.

As for City, it was the rock-solid Rúben Dias and John Stones that started at the back with the versatile João Cancelo starting as well. Gündoğan has been at the forefront of all things good for City in recent times and he started along with Kevin De Bruyne, who returned to the lineup from injury, and Fernandinho. Once again City started without an out and out striker, with Bernardo Silva occupying this role on paper, with Riyad Mahrez and Raheem Sterling on either side.

Having looked at the lineups, we shall now move into the analysis. 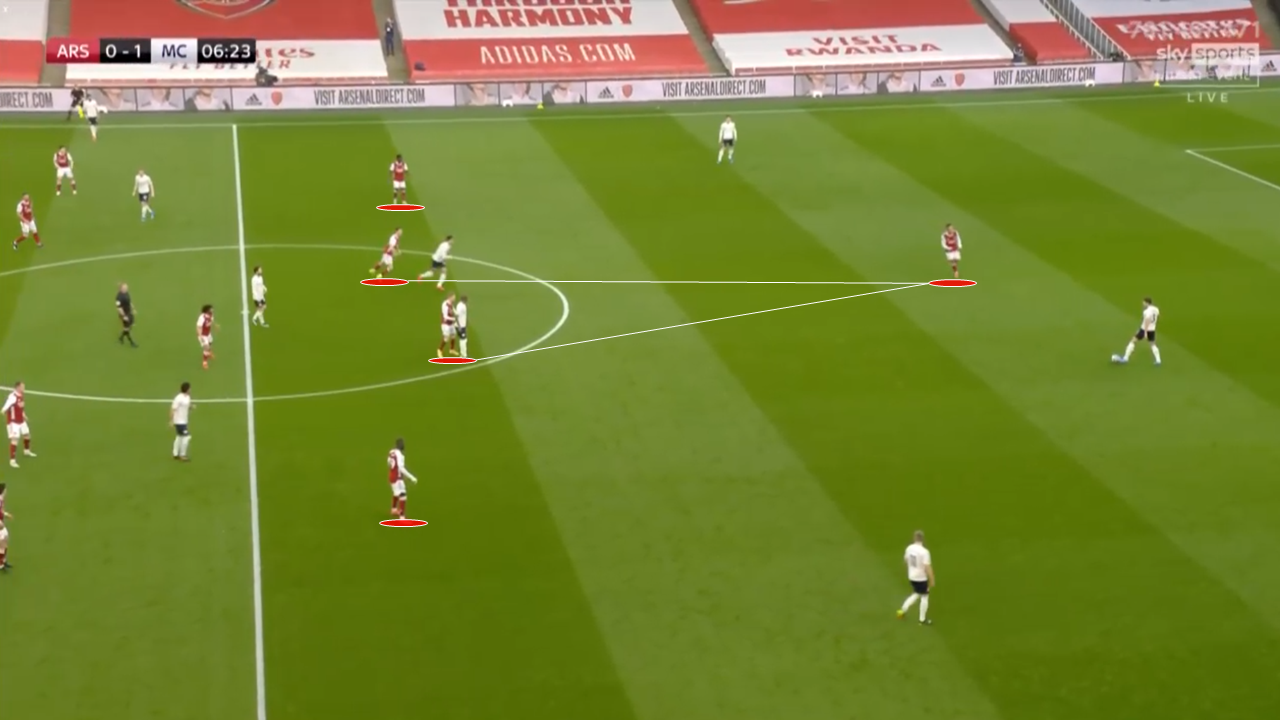 City have made it a habit to start well this season, and this game was no different as Guardiola’s side looked to stretch Arsenal. It was clear from the onset that Arteta had set up to be vertically compact in order to neutralise City’s midfielders and prevent them from pushing too high up the pitch. Hence, in order to create space in midfield, City’s defenders could be seen dropping deeper in order to invite the press. Dias looked comfortable playing the ball over the top and was often unfazed by the press, which meant that City were under no real danger inviting Arsenal forward.

However, Arsenal seemed to decline this invitation, with only Aubameyang staying forward to engage in a rather ineffective press. They moved into a 4-1-4-1 formation, with the four behind Aubameyang ensuring that they held their line along with City’s deeper midfielders. The vertical compactness also meant that just the one deeper-lying midfielder was enough to handle City’s higher midfielders, as some players from the four in midfield or defend would swoop in to offer backup immediately. 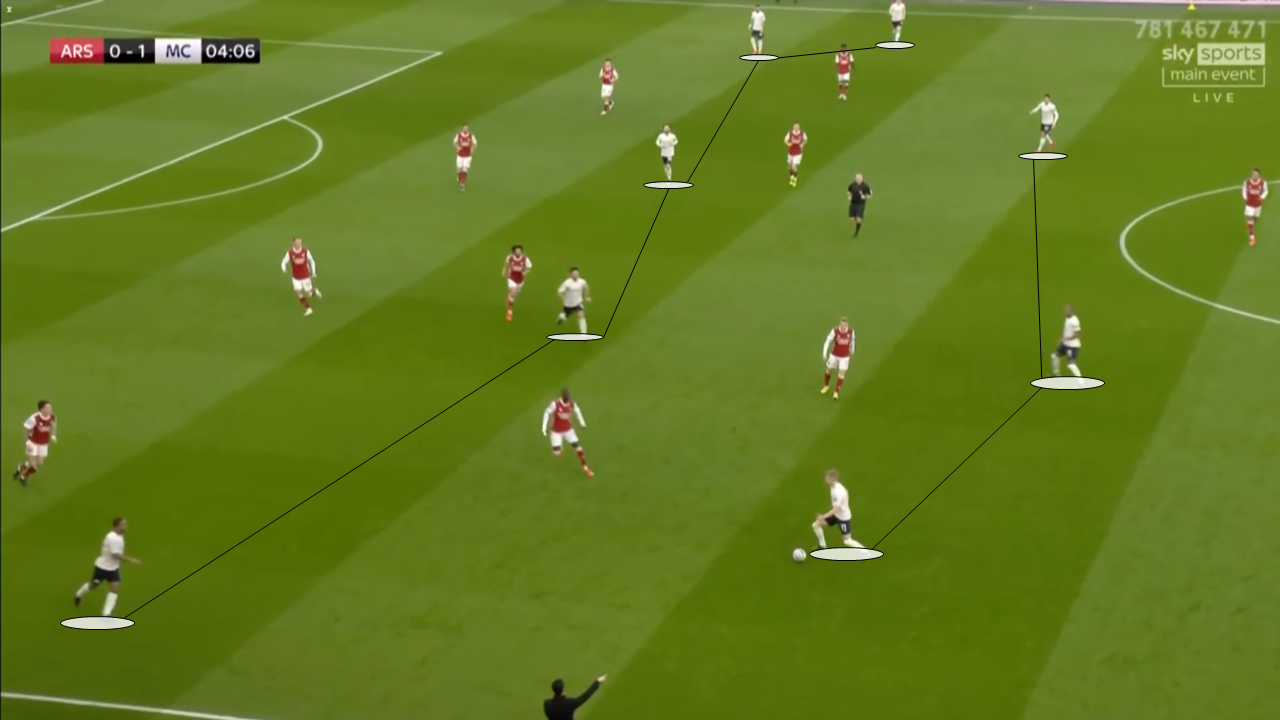 City also looked to stretch Arsenal vertically, moving into their usual 2-3-5 position in the attacking phase. Gündoğan and De Bruyne moved up to join the forward line with Cancelo and Oleksandr Zinchenko moving into midfield. This meant that Arsenal effectively had to move into a 4-4-1-1 or 4-5-1 with the defence and midfield line being relatively compact, in order to ensure that the backline would have enough support in case they were stretched too far out by the City forwards. 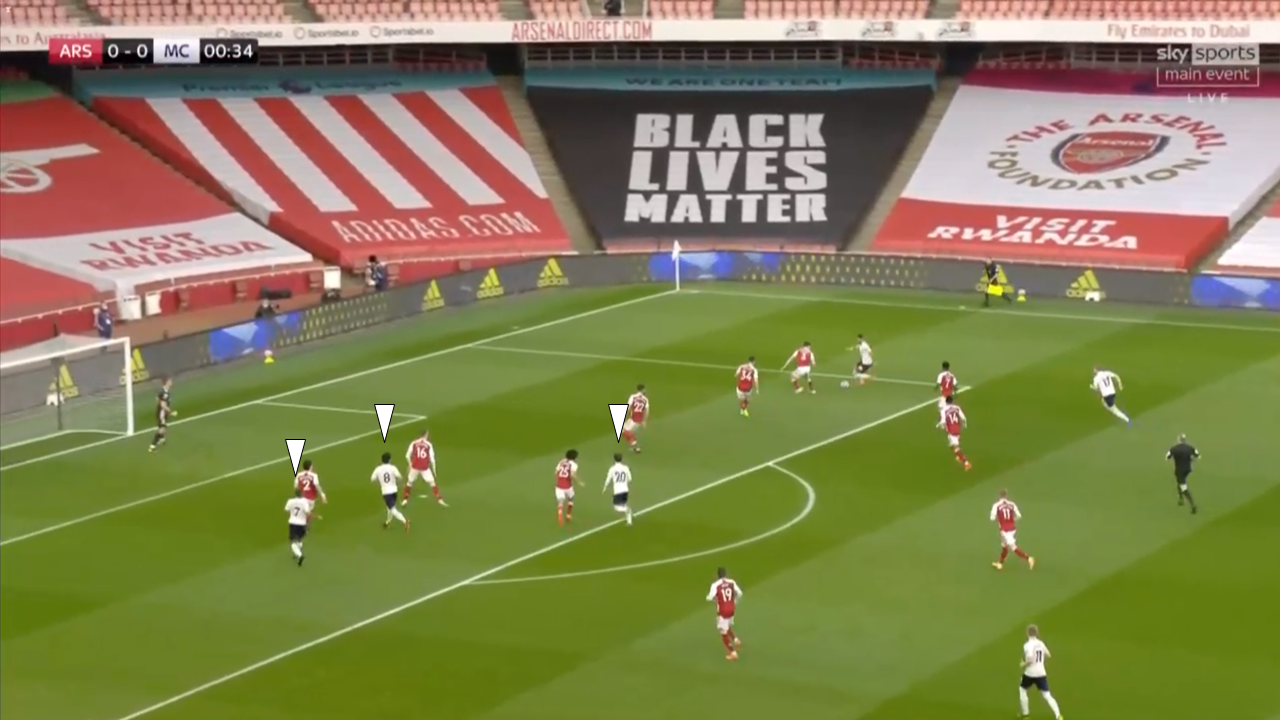 However, City still found a way. Within the opening minute, Mahrez was found open down the right flank and was offered more than enough space to take on Tierney at left-back. On the opposite side, Sterling was ready to move in behind with a far-post run. Gündoğan’s run distracts the Arsenal defenders with Sterling now essentially in a blind spot and Bernardo Silva’s movement to the edge of the box means that the central-midfielder cannot help out either. 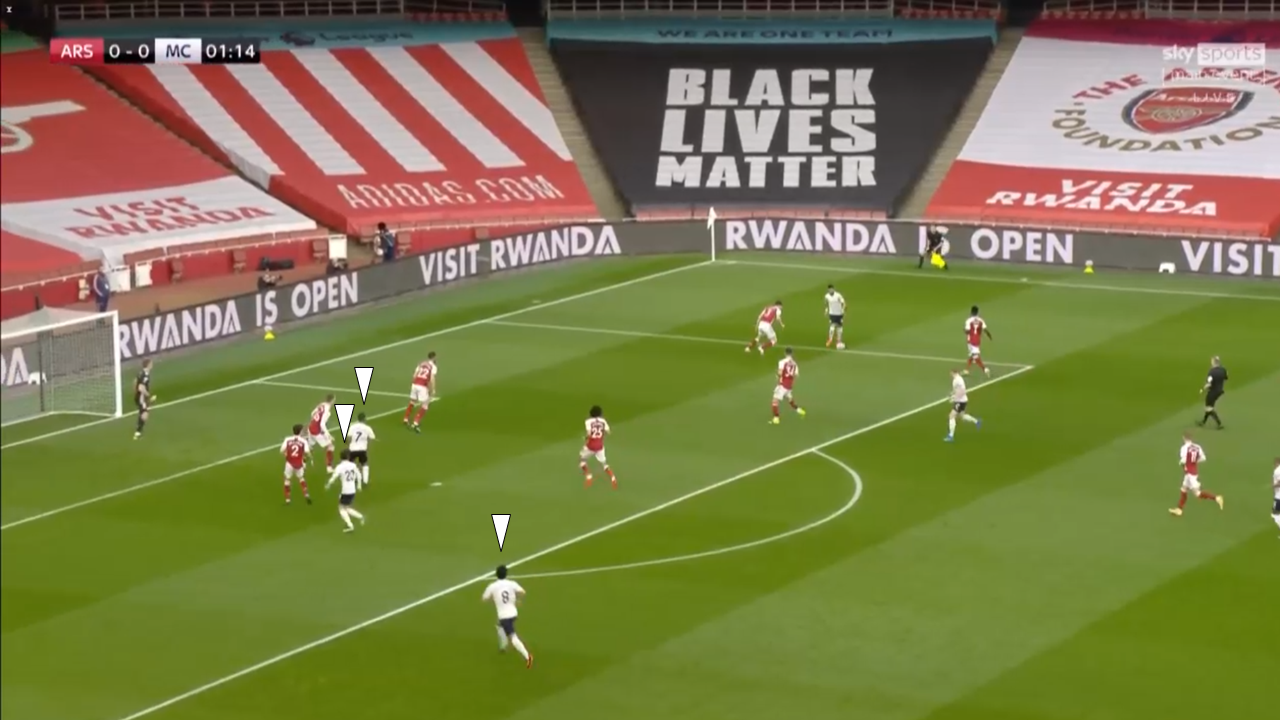 Though the first chance did not end up as a goal, it was a nearly similar effort that saw City score less than a minute later and just about 75 seconds into the game. It was a culmination of all the tactics that we saw above, with Arsenal’s ineffective press owing to their reluctance to be stretched vertically allowing a long ball over the top to Mahrez, who had the space to take on his defender and cross, with the full-back now wary of the blindside run and allowing a pocket of space for Sterling to run into in between the defenders and head home from close range.

It is pretty rare for a side’s tactics to click so early and so perfectly within the opening minutes but such is City’s form that they not only scored but created a few excellent chances within the opening 10 minutes that could have seen them run away with the game. 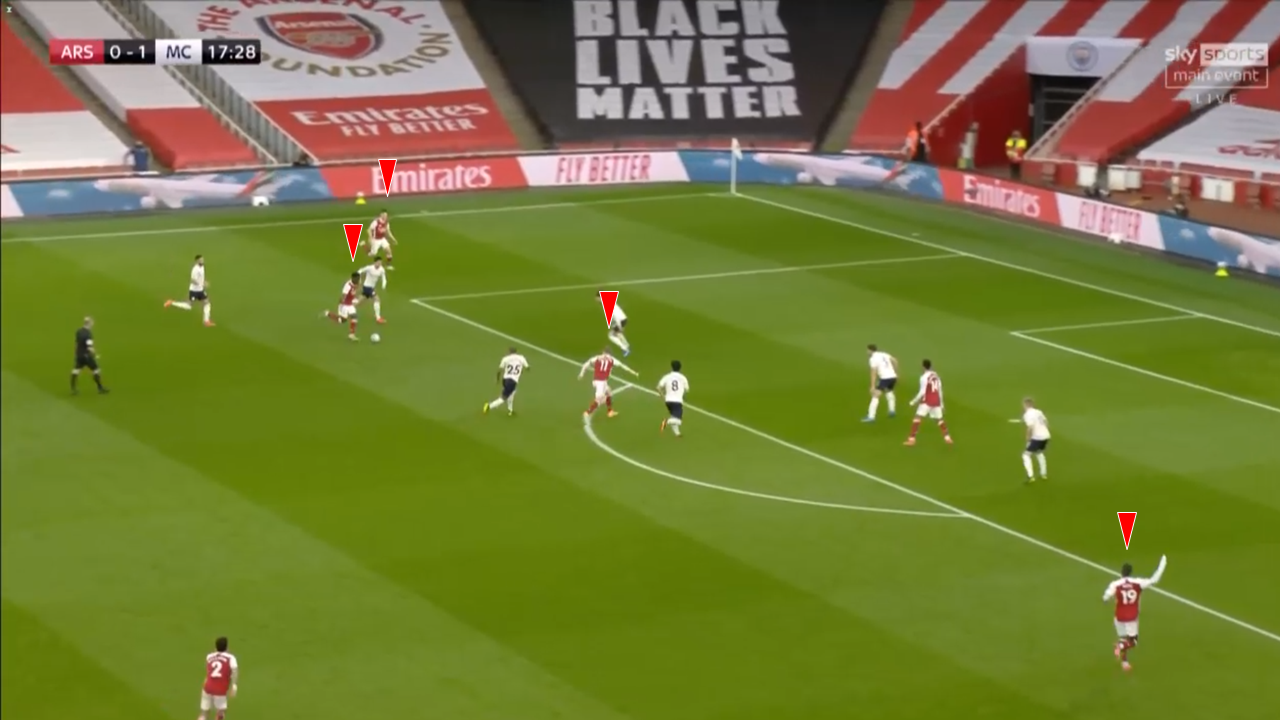 Arsenal were not out of the game yet though, and the Gunners did even out the contest as the game progressed. As mentioned earlier, the Tierney and Saka combination was one of the highlights of their season so far and it was the pair of them that provided the driving force as Arsenal searched for an equaliser. Saka looked to attack the half-spaces, drawing defenders to him and allowing Tierney to find space down the flank.

The likes of Ødegaard and Nicolas Pépé were keen to move into the spaces ahead of them, with the latter often finding himself in space down the right side. However, what City did effectively was cut off the passing lanes as Saka looked to switch the play to the opposite flank. 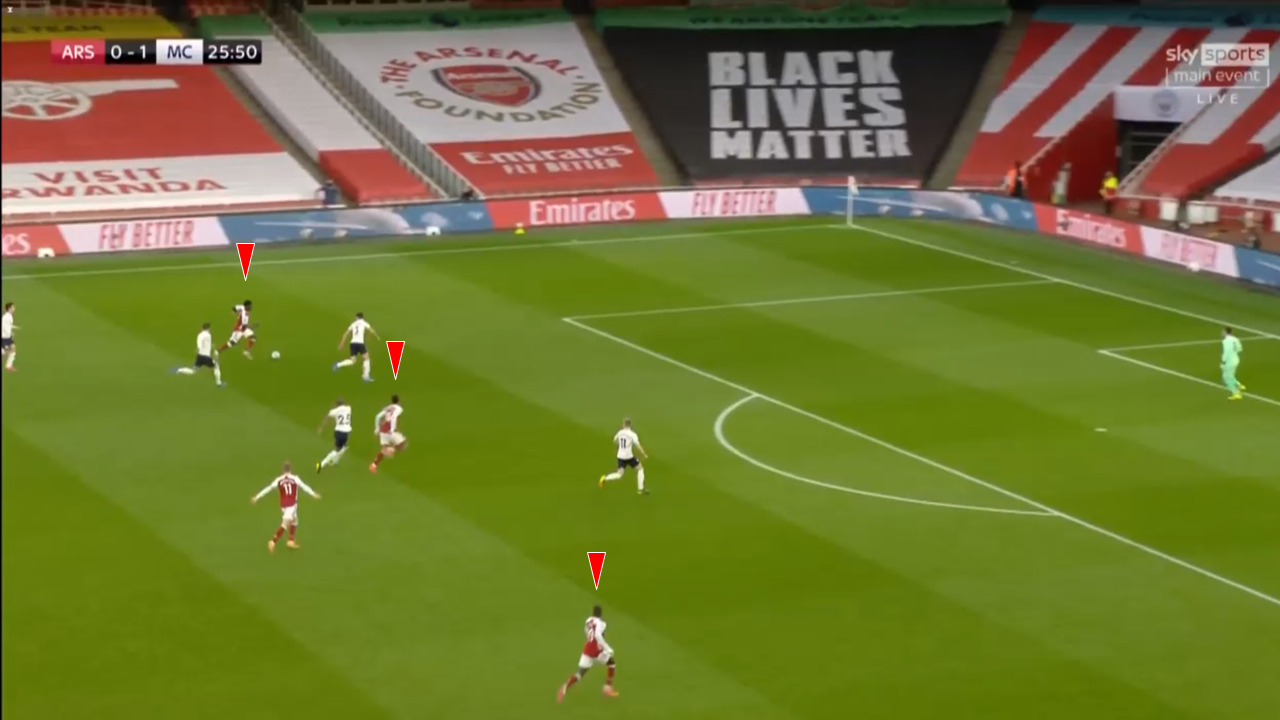 Furthermore, Arsenal were also set-up to hit City on the counter with the pace of Saka, Aubameyang and Pépé. With City pushing forward in their 2-3-5 formation, there was always going to be space for the Gunners to counter-attack and Arteta looked to exploit this. A recurring trend was that once again Saka looked to be the main driver of such counters with Aubameyang and Pépé often making dangerous runs in support.

Ødegaard also provided support from midfield and on a few occasions, Arsenal did really trouble the City defence. However, Fernandinho, Zinchenko and Cancelo were all always on hand to drop back and help out Dias and Stones. Pep had ensured that the middle three did not stray too far ahead of the centre-back in the attacking phase and with Stones and Dias able to effectively hold up play till support arrived, City maintained their clean sheet. 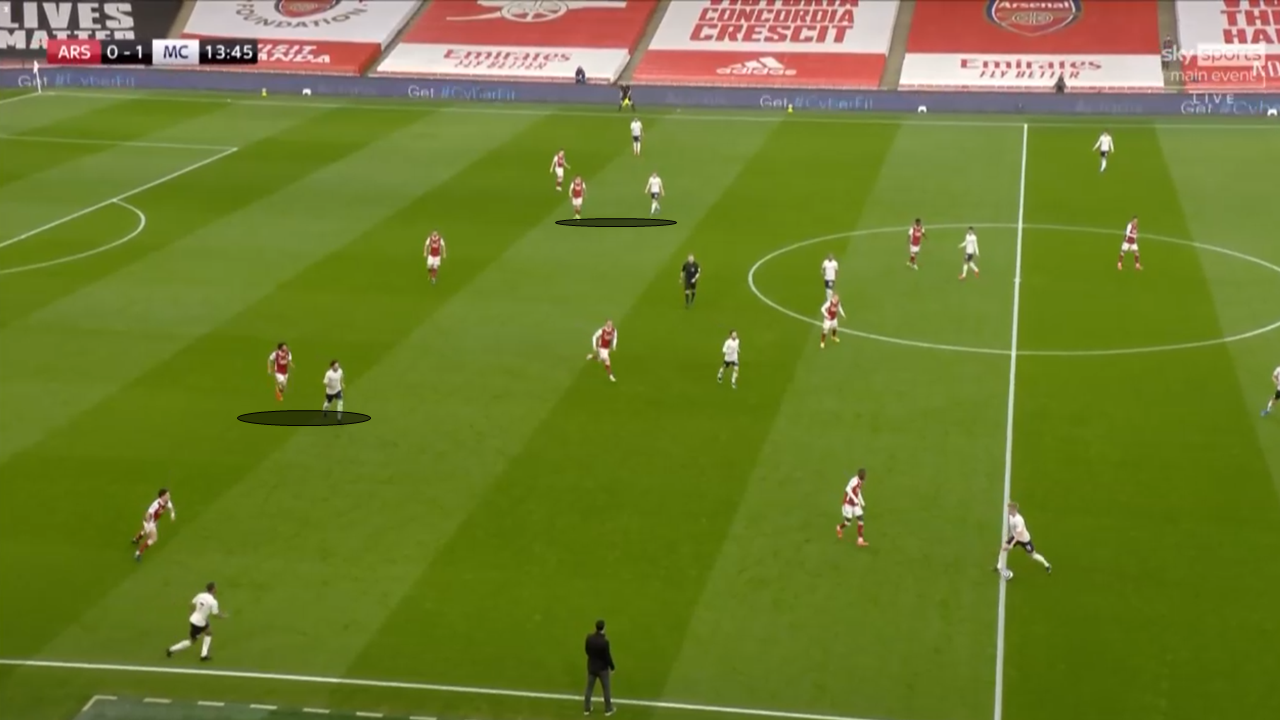 Another interesting tactic used by Arteta was to man-mark a few City players, most notably De Bruyne. The Belgian’s ability on the ball is, of course, widely known and as De Bruyne looked to move across the pitch from the right to left half-space and vice-versa, either of the Arsenal central-midfielders would man-mark him in their respective halves. However, Arteta also realised the marking De Bruyne alone would not be enough, with the likes of Gündoğan and Bernardo Silva playing much higher up and more than capable of running past defenders unnoticed. Hence, the other Arsenal central-midfielder would man-mark the City midfielder for as long as they were pushing higher up, and as De Bruyne moved across, they would shift the focus to him.

While this did neutralise City’s attacking threat to an extent, De Bruyne would instead drop further back to receive the ball and with his ability, was still able to play excellent passes through for his teammates but owing to the added challenge, City were not able to grab those opportunities and make use of them efficiently. 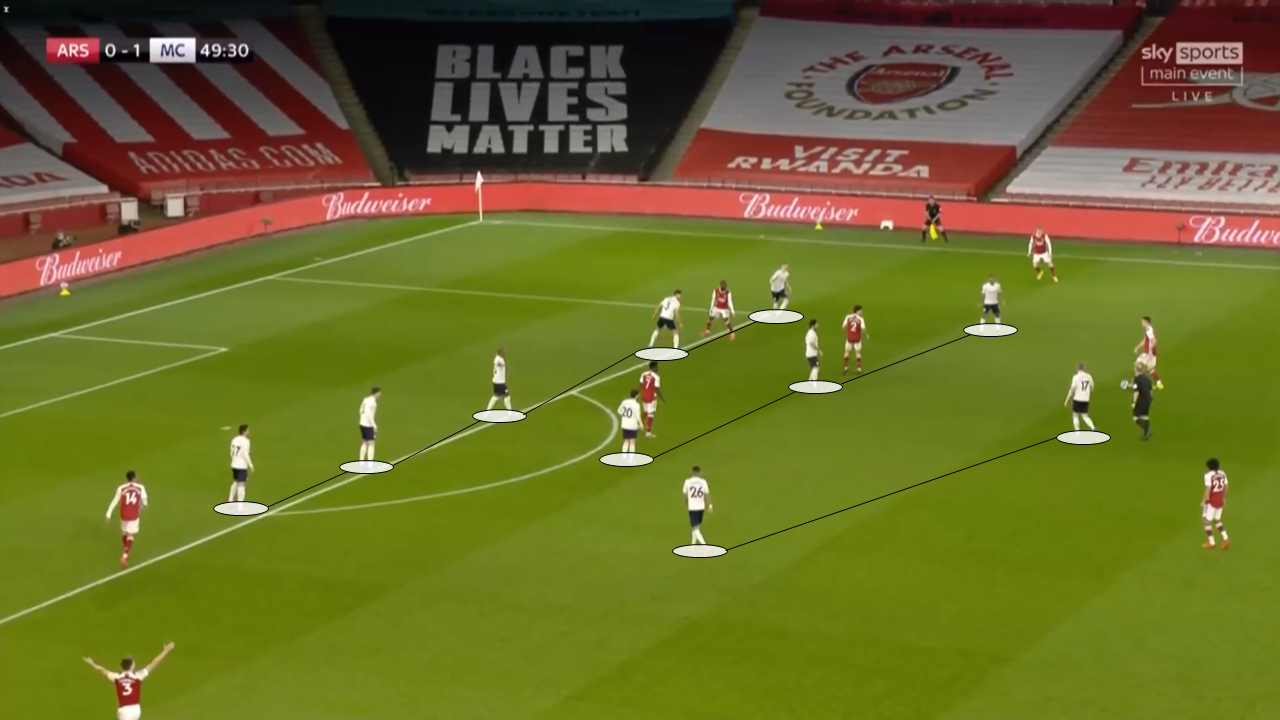 With the onus on Arsenal to find an equaliser, City then dropped into a compact 5-3-2 structure, with Fernandinho joining the backline. It was clear that Arsenal were looking to play through the wings before moving the ball to the centre or attack the half-spaces and Pep ensured that he had enough men behind. He would often have enough players to cover the cross, in order to prevent it from being delivered to the box and even when Arsenal looked to play into the half-spaces and find room for a shot, the City bodies were well-positioned to deal with such chances. 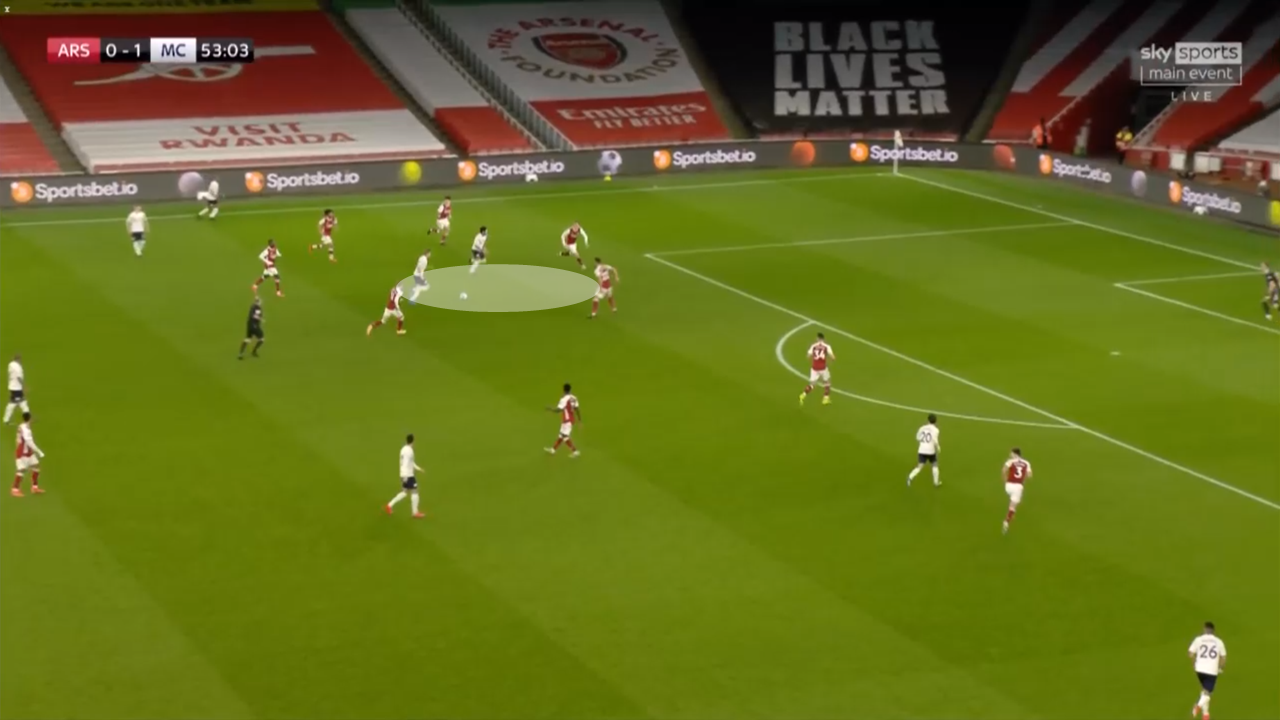 It was not all defence from City either, who sensed that they could create chances of their own off counters as well. De Bruyne was far more effective moving into the half-spaces in the second half and was able to carry the ball and look to play his teammates through. However, Arsenal ensured that they did not overcommit with numbers going forward and Arteta had enough support at the back to deal with such play. 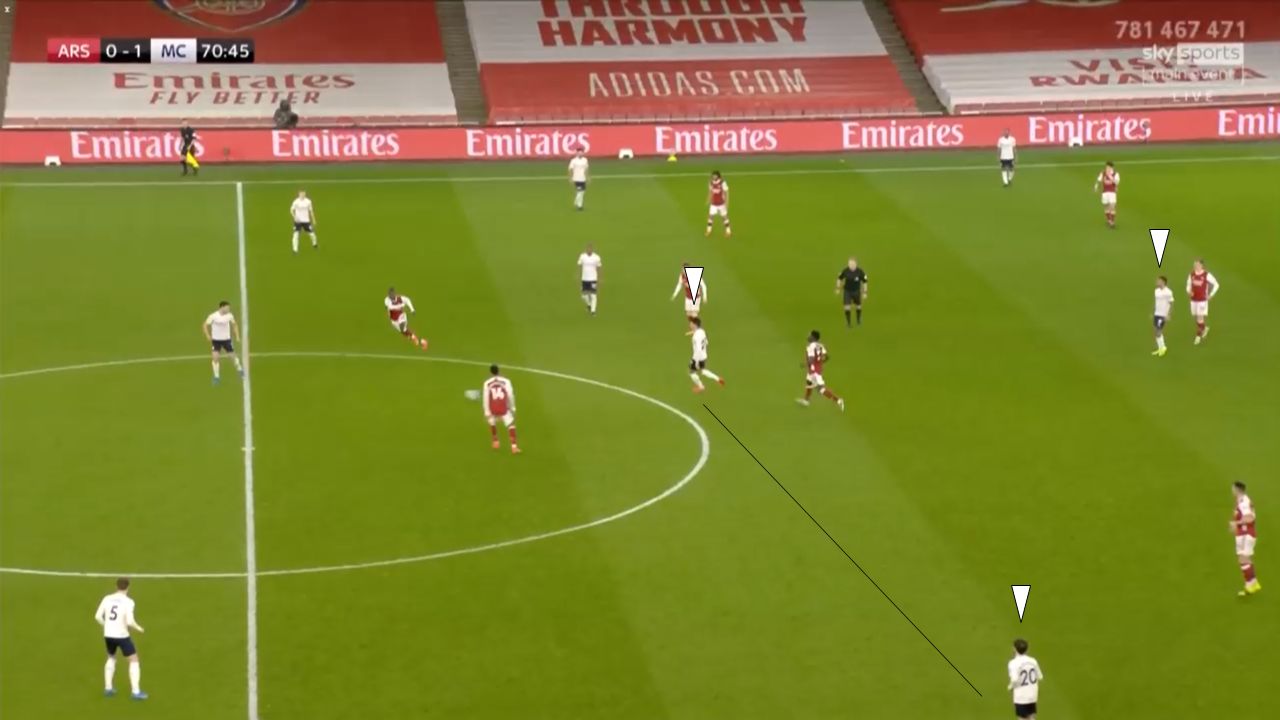 With time running out and Arsenal still searching for their equaliser, Pep then shuffled his pack, withdrawing De Bruyne for Gabriel Jesus. This was the first time in the game that City had a focal point in attack, with Jesus taking up his usual striker role but with this change, Cancelo also moved into midfield, swapping with Bernardo Silva. With De Bruyne off the pitch, City were missing the technical creator in the middle of the pitch and Cancelo moved to fill this role. His versatility and technical ability have shone through all season and this rotation meant that Arsenal now had to cope with this different challenge. Their ability to attack was limited, with City able to rotate the ball through the midfield and Fernandinho and Cancelo were more than capable of falling back out of possession.

These rotations ensured that City were not pinned back for long periods of time and could get forward and create chances of their own as well in order to trouble the Arsenal defence.

Overall, Arsenal did well to play themselves back into a game that looked to be running away from them in the opening stages. However, Guardiola’s smart tactics to make use of his defenders in order to stretch Arsenal vertically, and also his use of the likes of Zinchenko and Cancelo in midfield in the attacking phase meant that the midfielders could move forward and stretch Arsenal horizontally as well. Their defensive performance was excellent as well, with their positioning to cut down passing lanes and get their bodies in front of shots seemingly perfect.

A well-deserved victory for the league leaders who find themselves 10 points clear at the top but more to think about for Arteta, who finds his side languishing in a mid-table battle.