Barcelona welcomed Deportivo Alaves at the Camp Nou in La Liga last Saturday and treated them to four goals in their nets with just one in their own. For the majority of the game, the Catalans were in firm control bar a short spell later on in the second half and the victory was, especially with a touch of Lionel Messi magic, warranted.

This tactical analysis will give you both teams’ tactics and tell you how Ernesto Valverde’s troops beat Asier Garitano’s.

There were a couple of changes in the hosts’ lineup that was deployed in a familiar 4-3-3 system. Samuel Umtiti was given a nod in front of Clement Lenglet in the centre of Barcelona’s defence while the midfield saw the biggest changes.

Carles Aleñá started and finished the game – a rarity in his case in 2019/20 – and was paired up with Arturo Vidal and Sergio Busquets. The forward line remained the same with Lionel Messi leading the charge with Luis Suárez and Antoine Griezmann. 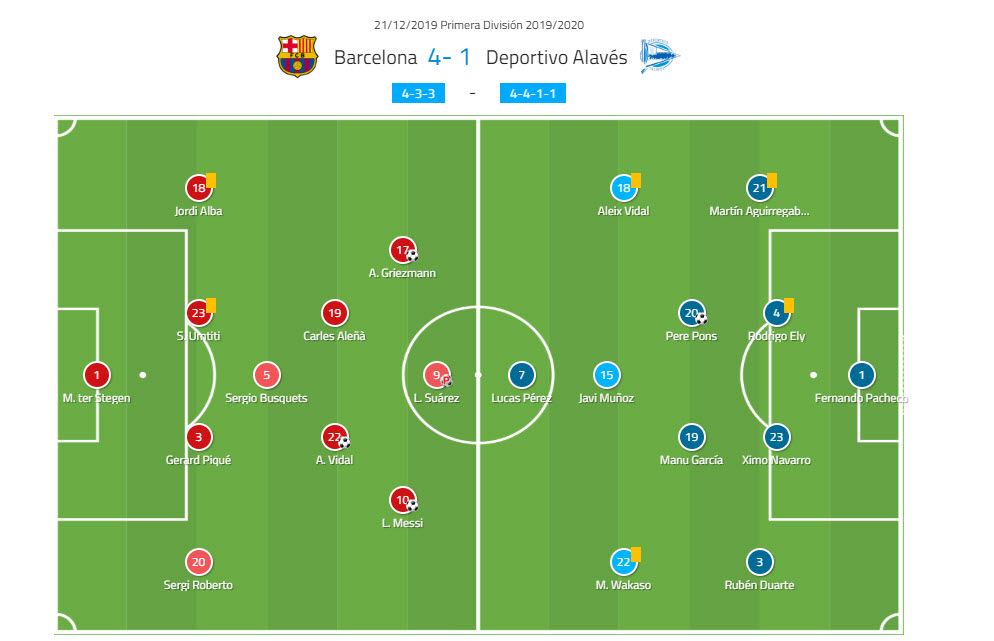 Similarly to the home team, Deportivo Alavés also decided to stick to most of their usual big guns but were deployed in a rather defensive 4-4-1-1 system that was seemingly used more as an effort to shut Barcelona down rather than contest them.

The only two changes from their draw with Leganés in La Liga less than two weeks ago were the introduction of Javier Muñoz instead of Joselu just behind the striker, Lucas Pérez, and the return of Mubarak Wakaso, who was serving his suspension prior to this clash.

It’s not really unusual for Barcelona to face teams that decide to turtle up and counter their tactics by deploying a compact, low to mid-block. Deportivo Alavés were more about trying to keep the Catalans out than forcing them to react themselves.

As a result, they were content with not going out to contest the play and were happy to sit deep and defend in a 4-5-1 or a 4-4-2 formation that would sometimes turn into a 4-4-1-1 depending on the situation.

But there were various variations to their system depending on Barcelona’s advancement on the pitch. In a scenario in which they would try and press their opposition, Deportivo Alavés would do so in their 4-4-1-1 formation with one player rushing the ball carrier while others would join in by covering other passing channels.

If Barcelona repelled their efforts, we would see them revert back to the more usual 4-4-2, congesting the middle of the pitch and making sure the Catalans can’t reach their midfield trio.

You can see an example of that below with each of Barcelona’s midfielders having two markers closely following them and forcing the Blaugrana to look for different outlets.

In scenarios in which the Catalans managed to advance further up the pitch, approaching the final third, Deportivo Alavés would sometimes even drop to a five-man defensive line in a 5-3-2 system which was used to negate Barcelona’s own approach, which we will discuss in more detail further down the line of this tactical analysis.

If the Catalans swapped to their all-out attacking 2-3-5 formation, this would usually prompt a reaction from Deportivo Alavés who would then drop one midfielder into the backline as well, effectively mirroring their counterparts’ lineup.

Even though this approach did keep Barcelona quiet and under control for the majority of the clash – as evident from their rather low 1.23 xG values – it also meant they were not really focused on attacking themselves, resulting in just 0.62 for Gariatno’s side.

Usually when they are forced to go wide due to their opposition’s efforts to block all the passing options through the middle channels, Barcelona tend to rely on their full-backs to bail them out of jail.

Against Deportivo Alavés, those tactics were even more emphasised than usual. The key to unlocking their opposition’s compact block was in creating space and then utilising it with long balls over the top, usually into the path of their bursting full-backs.

Notice below how this worked out on the pitch. Sergi Roberto keeps Deportivo Alavés’ backline stretched out as much as possible and Vidal drops deeper towards the ball carrier, Messi, to create a pocket of space through which the ball can be treaded.

That way, Barcelona can bypass Deportivo Alavés’ five-man backline and move into the space with pace and intent. A similar thing was happening on the other side of the pitch with Griezmann and Alba interchanging positions so as to move their markers out of their shape.

Notice below how the Frenchman drops deeper, dragging the defender along with him, which creates an opening for Alba, who is easily found with a ball over the top and into open space behind the defensive line.

This was the simplest and also the most effective part of Barcelona’s tactics to deal with a tight block that wanted to mark their forwards out of the game. In those situations, Griezmann, Suárez and Messi sticking to their positions depicted by the team sheet would have been unfruitful for Barcelona and luckily, their forward line was as fluid as ever.

We know how the Argentine mostly drops all the way deep into the midfield and Griezmann was doing a similar thing out wide to enable Alba’s overlaps. But Suárez also played a crucial role in setting up his teammates, both with his movement and finishing touches, as evident from his hat-trick of assists on the night.

In the build-up to their first goal, the Uruguayan drifts out wide towards the right flank, creating a pocket of space for Vidal to run into. Even though the Chilean does exactly that, it’s Griezmann who receives the ball in that area, which ended up being lethal for the guests.

These tactics that revolved around the exploitation of the wide areas and progressing the ball from deeper positions and over longer distances are also confirmed by Barcelona’s progressive pass graphs and their numbers.

In six of their top passing links on the night, five of them included a full-back, either Roberto (3) or Alba (2), highlighting the tendency to attack through the flanks. Similarly for progressive passes – six out of seven included a full-back once more.

Still, Deportivo Alavés came close to actually rattling Barcelona in the second half, with Garitano changing his tactics to a more offensive approach but it was too little too late for the guests.

The guests had a small window of opportunity to potentially turn the game around come the second half of the game. This was evident in their xG rise from the minute 55 onward as Garitano decided to make some changes in his overall tactics.

Not to mention that out of their five most promising situations that yielded the highest xG values, four happened from minute 56 and onward.

It started, however, with some tactical changes as Luis Rioja and Joselu entered the pitch, replacing Wakaso and Muñoz and Deportivo Alavés shifting into a higher gear. The goal to make it 2-1 evidently put some wind into their sails.

The biggest change was visible in the way they challenged for the ball as their PPDA (passes allowed per defensive action) drastically decreased from their highest point, 37.5, to just eight at the peak of their aggressiveness and in the period we already mentioned as their brightest throughout the whole clash.

On the pitch, this was visible in how they started pressing Barcelona, sacrificing their compact block for a more rapid approach that started squeezing their opposition and shrinking their area of operation.

You can see this change down in the example below as Deportivo Alavés deploy a high press in an attempt to force a mistake out of the Catalans.

But apart from the change in the sheer pace of their game, they still deployed similar tactics if and when Barcelona breached their press – they would revert to a compact block, waiting for the right opportunity to strike and hurt their hosts on the break.

There were some situations during which certain positional manoeuvres were executed but as a whole, Garitano’s tactics revolved around defending and staying alive rather than facing Barcelona in an all-out game.

Unfortunately for the guests, Messi’s moment of magic shifted the tides once again and even though they were really close to making a statement, they failed to cross the finish line due to sheer individual quality that was on Barcelona’s side.

When everything is said and done, Barcelona dominated the proceedings at the Camp Nou quite expectedly but Deportivo Alavés had an opportunity to strike once their hosts were rattled in the second half.

Unfortunately for Garitano’s men, they failed to do so, allowing Barcelona to regain control and see the game out with relative comfort, as this tactical analysis has hopefully shown you as well.