Roma continue to do well in Serie A as they impressed again on Friday night by securing a 4-1 win at Fiorentina. Once again, Lorenzo Pellegrini, Nicolò Zaniolo, and Edin Džeko shone in Roma’s attack while Paulo Fonseca’s tactical understanding continues to shine through the more time he gets with his players. This tactical analysis will look at the tactics deployed by both teams. 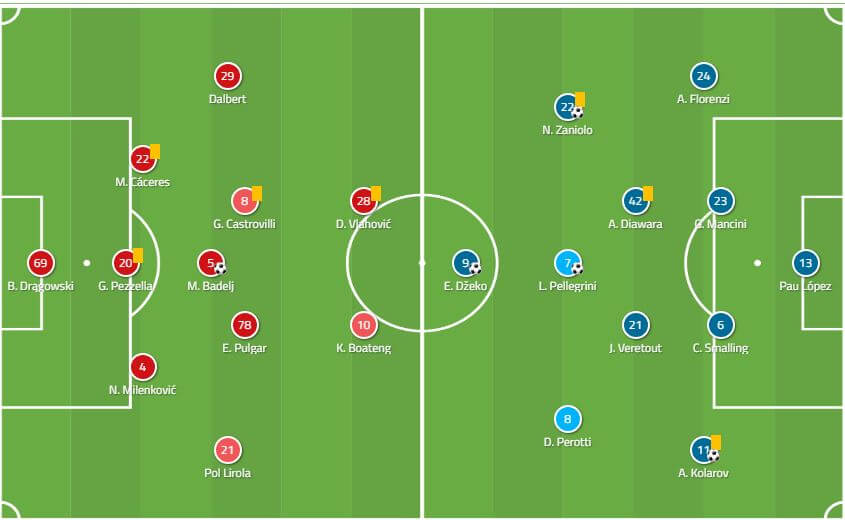 One of the key defensive mechanisms of Fonseca’s Roma is compactness. This means compactness vertically as well as horizontally, with Roma defending as a very collective structure where each player helps his teammates in pressing and covering. This means that the two wingers, Zaniolo and Perotti, defend in very narrow positions to maintain this horizontal compactness and prevent central passing lanes opening up for the opposition.

However, Fiorentina’s shape lent itself simple to press in a man-orientated manner too. Thus, Roma deviated a little from their normal defensive approach since the front four was slightly man-orientated. This certainly was the case with the number 10 Pellegrini who largely man-marked Badelj as Fiorentina looked to build from the back. Moreover, Džeko had natural access to Fiorentina’s central centre-back, Germán Pezzella, while Zaniolo and Perotti had natural access to Fiorentina’s outer centre-backs thanks to their narrow starting positions.

Additionally, Diawara and Veretout could then focus on Castrovilli and Pulgar respectively while the two full-backs Aleksandar Kolarov and Alessandro Florenzi were ready to press Fiorentina’s wing-backs in the wide areas. We can see this defensive setup in the graphic below. 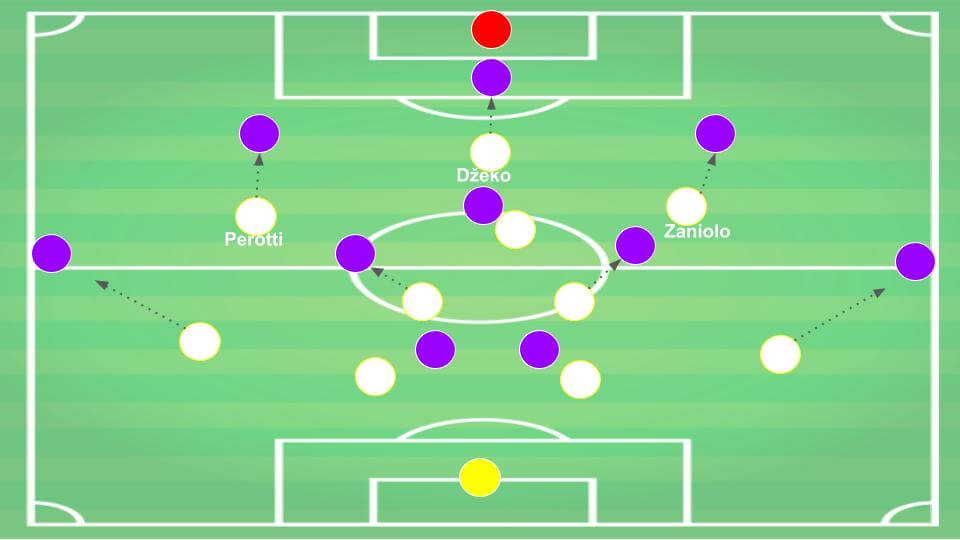 As mentioned, Roma are very compact when defending and Friday night proved no different. They looked to close off central passing lanes and force Fiorentina wide, where Florenzi and Kolarov would sprint out and press the home side’s wing-backs. We can see the collective defensive movements of Roma in the graphic below with Zaniolo pressing with an angled run to force the pass to go wide where Florenzi can press while the rest of the team shuffle across accordingly. 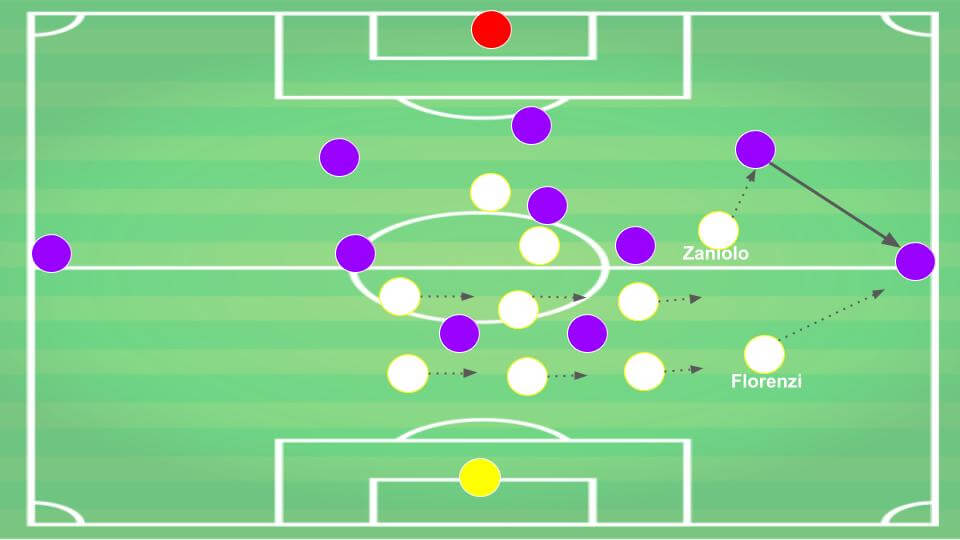 Roma’s pressing and compact defensive shape led to Fiorentina often struggling to progress the ball cleanly and allowed Roma to regain possession quite easily. Thus, it comes as no surprise to learn that Roma dominated possession throughout the 90 minutes.

Roma constantly asked questions of their opponents by rotating quite a bit in their attacking structure. The first noteworthy movement was that of Diawara. The central midfielder would repeatedly drop between the two centre-backs Gianluca Mancini and Chris Smalling, who both split wide to allow the full-backs to push on and provide attacking width. Diawara’s movement allowed Roma to create a 3 vs 2 numerical advantage against Fiorentina’s two strikers. As a result, Roma could easily progress the ball forward from their defence. The image below highlights this movement. 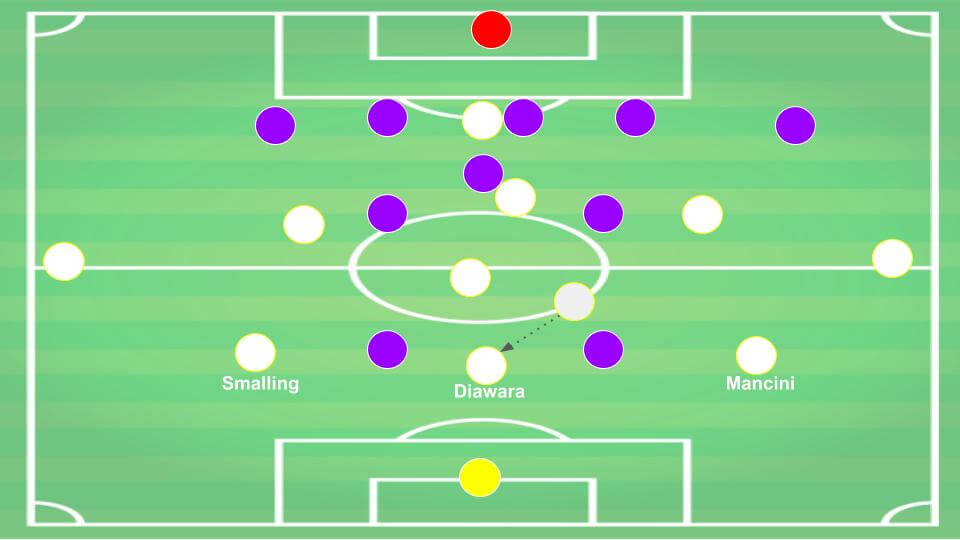 As you can see above, Roma still had a numerical advantage in midfield since Zaniolo and Perotti played narrow to form a situational diamond in midfield with Veretout at its base and Pellegrini at its tip. This gave Roma a 4 vs 3 advantage even after Diawara had dropped out of midfield.

Narrow or inside wingers is another trademark mechanism of Fonseca’s Roma. In this game, the left-footed Zaniolo, playing on the right, and the right-footed Perotti, playing on the left, positioned themselves outside Fiorentina’s midfield three in the space just in front of the outer centre-backs. In these positions, they could often turn and affect the play, and Fiorentina struggled to pick them up. The image below highlights how the two of them often found plenty of space just outside Fiorentina’s outer midfielders. 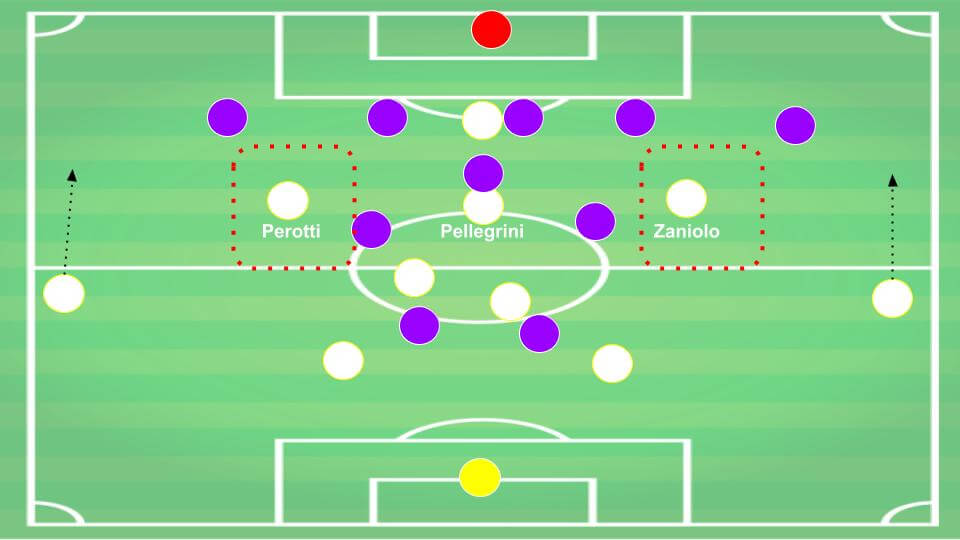 The most effective method for getting the ball to the two inside wingers was to use diagonal passing to bypass the Fiorentina midfield and allow Perotti, in particular, to receive the ball on the half-turn and instantly run at the defenders in front of him. The graphic below highlights one such situation when Diawara finds Perotti in space. 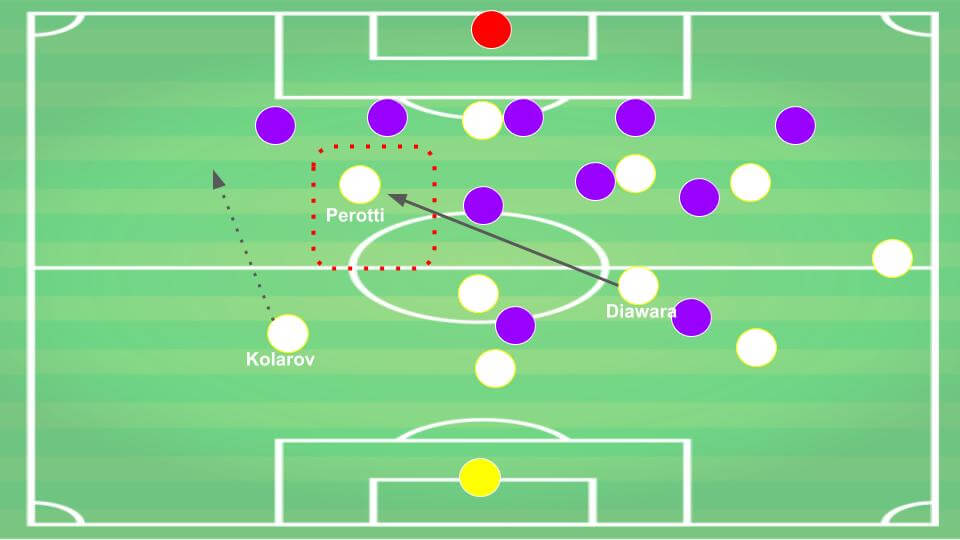 The image below highlights Roma’s average positions, in which we can see the deeper average position of Diawara (42) and the narrow nature of Zaniolo (22) and Perotti’s (8) positioning. 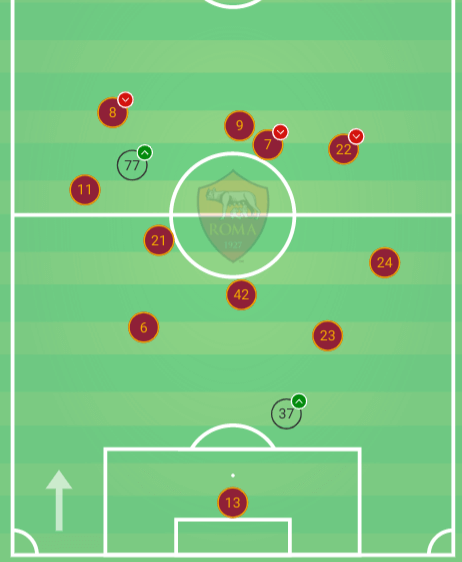 Fiorentina’s use of dummy runs

As mentioned earlier, Fiorentina struggled to build attacks consistently due to Roma’s impressive defensive structure. However, they did have one interesting method that worked well. Firstly, let’s look at their average positions. What is interesting here is the high position of Castrovilli (8) and the deeper position of Boateng (10). The reason for this is what I’ll touch on below. 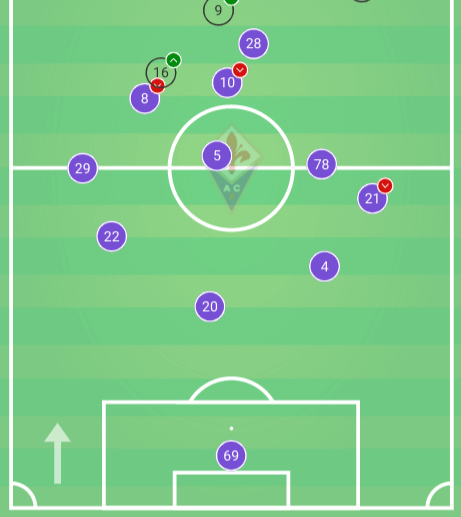 When looking to progress the ball, Castrovilli would repeatedly make deep runs into the space behind Florenzi. This space highlighted a flaw in Roma’s defensive setup: Florenzi was often too quick out to press Dalbert down the wing, which opened up a space between him and Mancini. Previously playing for Gian Piero Gasperini’s heavily man-orientated Atalanta, Mancini would pick up the run of Castrovilli and follow the Italian wide. This created the issue of Smalling being isolated with the two strikers on his own. In the image below, we can see Martín Cáceres in possession as Castrovilli’s run drags Mancini out of position. 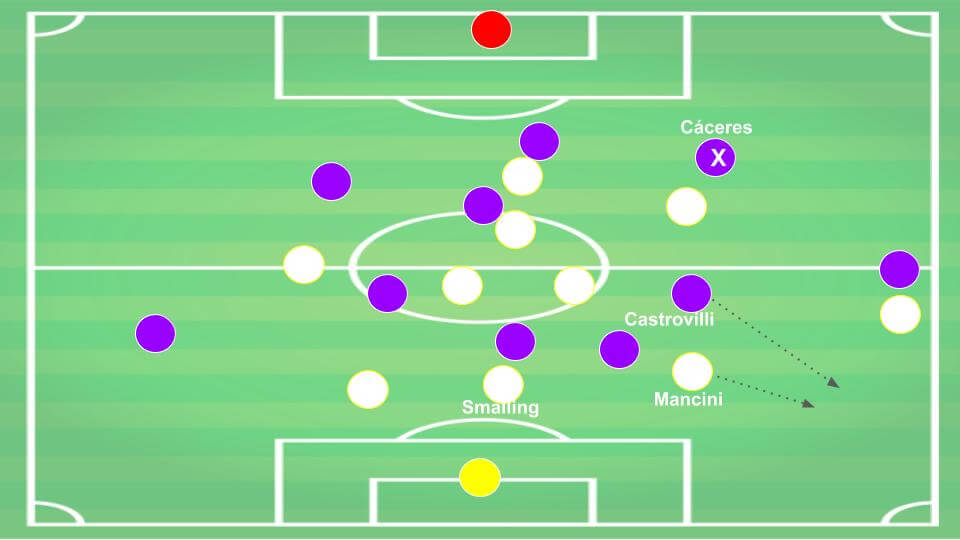 With Mancini now out of position, Cáceres played the ball into Boateng, who was free, and Fiorentina had bypassed almost the entire Roma team with one pass, as we can see in the image below. Therefore, these dummy runs from Castrovilli exploited the fact that Mancini has not yet totally learned the positional orientation of Fonseca’s defence. Fiorentina’s best chance apart from their goal from exactly this sort of play with Boateng laying the ball off to Castrovilli who played Vlahović through on goal but the Serbian was offside. 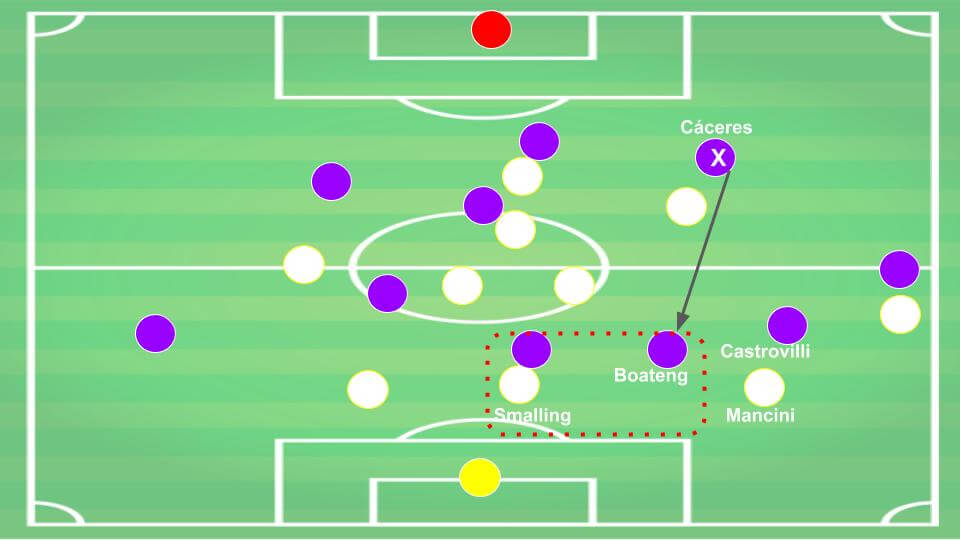 As this analysis has shown, Roma deserved the win against La Viola. Still, it was hard fought for 70 minutes until Pellegrini put the game to bed with his 73rd-minute strike. The Giallorossi continue to do well under Fonseca and will be interesting to follow in the second half of the season as they push for Champions League qualification.