Barcelona hosted Mallorca at the Camp Nou on Saturday night and the Catalans put five past their struggling guests, snatching all three points in La Liga after a rather dominant display lead of course, by a Lionel Messi hat-trick.

This tactical analysis will use statistics and analysis to give you both teams’ tactics and tell you just how Barcelona got the best out of Mallorca.

Even though this was a match against lower-table opposition, Ernesto Valverde took no chances and deployed what was his strongest available lineup. The only change in a standard 4-3-3 system was the inclusion of Ivan Rakitić, who replaced the injured Arthur Melo, while the rest of the squad saw no reshuffles. 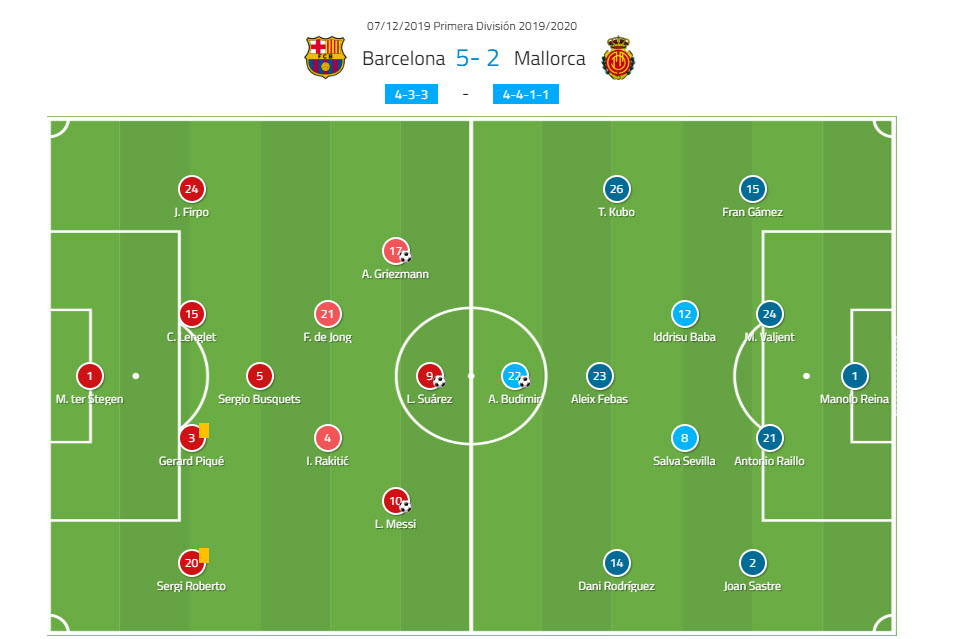 Vicente Moreno also did very much the same thing like his counterpart coach, deploying his team in a familiar 4-4-1-1 formation, used in 55% of all games in 2019/20, with minimal personnel changes along the way.

Lumor Agbenyenu, who was sent off in the previous clash after receiving two yellow cards, was replaced by Joan Sastre and the rest of the team consisted of familiar faces who were also present in their defeat to Real Betis prior to this game.

As everyone probably expected even before the start of the game, Barcelona completely dominated the possession throughout the 90 minutes and Mallorca’s defensive tactics revolved around sitting deep and compact.

Moreno instructed his team to defend in a 4-4-2 shape and avoid pressing the Catalans since that would then leave plenty of space behind them for their opposition to exploit. These tactics meant that Mallorca were mostly turtled up behind the ball and maintained their compact shape. 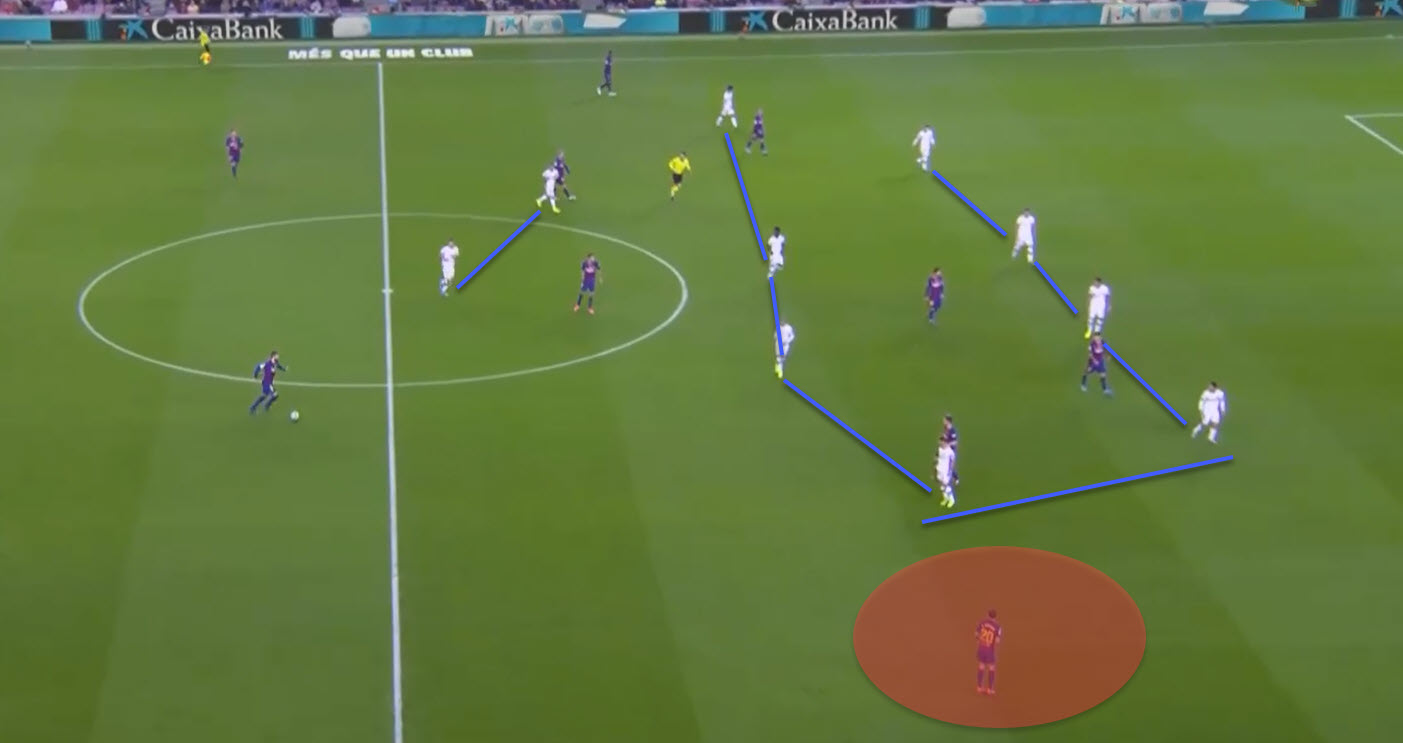 Notice above how that system looked like on the pitch. One other thing to notice is how narrow they are, which leaves Barcelona’s wide men completely unmarked and free to receive the ball.

Of course, if Barcelona were to go directly wide, Mallorca would just move their block and try and double down on the flanks in order to stop the progression of the ball. But Barcelona often moved their pieces across the board quite well, moving their opposition out of shape in the process.

One of the forwards would regularly drop deeper to receive the ball and do a lay-off pass towards the wings. On the left, Antoine Griezmann would send Junior Firpo into space while on the right that would often be an interchange between Sergi Roberto and Ivan Rakitić.

Notice above how Rakitić and Messi swap places as the Croat surges forward, occupying the centre-backs while the other players are focused on the Argentine. This leaves the flank wide open and a swift one-two leaves the right-back in acres of space.

And Barcelona exploited this all game long. Rakitić would receive the ball from the backline, immediately shift it to the wings, which were almost always exclusively free, and then make a run to a more advanced platform. Notice below how that worked out well for Barcelona. 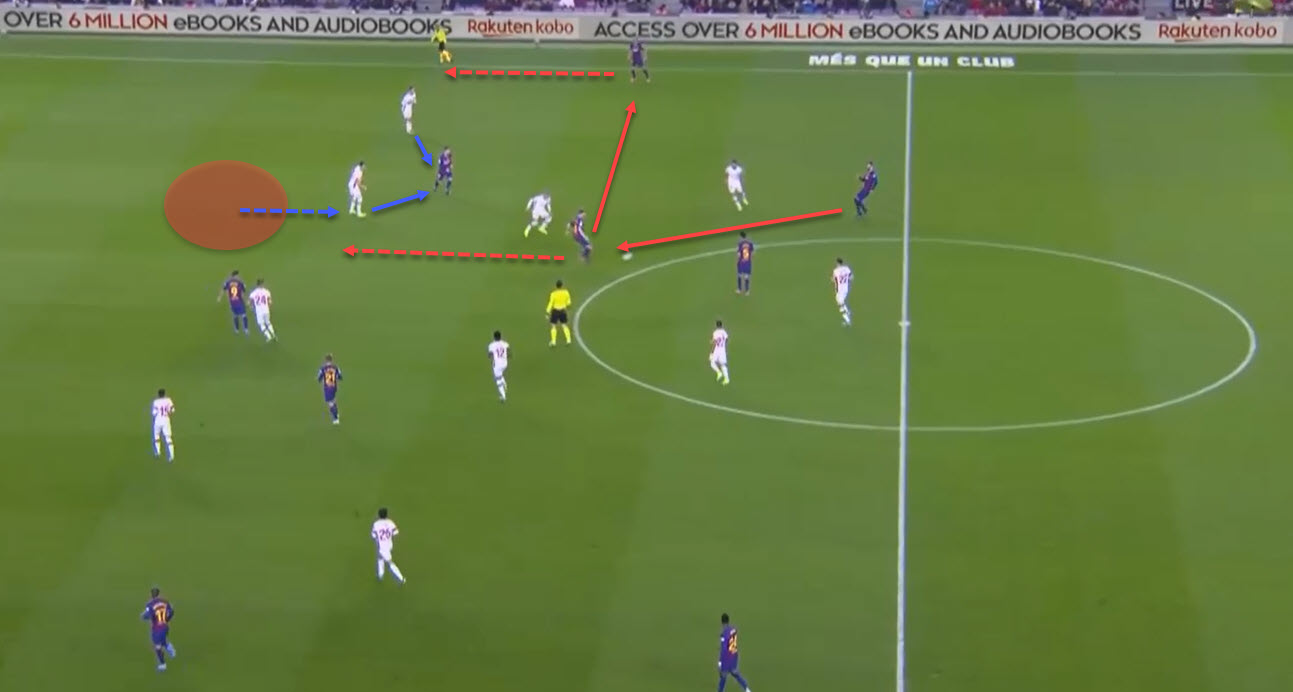 Messi also pulls the centre-back so that Rakitić can run into space accordingly.

Even though the Blaugrana created their most dangerous moves through the middle with that channel having the highest xG figures on the night, Roberto played a crucial part in their tactics going forward.

In Barcelona’s top five passing links, Roberto was part of three of them – with Rakitić (45 passes), as this combination seemed crucial to the progression of the ball on the right, with Gerard Piqué (24 passes), as the ball was moved from the backline onward, and most importantly, with Messi (33 passes) as the two were combining often in the opposition’s final third.

The Croat also offered some defensive backup behind Roberto, positioning himself behind his back so he could burst forward, as seen in the following example. Just like how Messi dragged the markers in the previous example, Luis Saurez does the same here, creating space for the right-back to burst into.

Busquets can then easily find a threaded through ball, breaking the lines and setting his team’s attack brilliantly.

Even though the goals were all magnificent with individual skill sparking, Barcelona had firm control of the flanks, which gave them a huge edge going forward.

The main aspect of Barcelona’s victory was in the aggressive approach that enabled them to maintain their dominance throughout the clash. Their tactics were clear from the start of the game – don’t let the opposition stabilise their play and build their attacks comfortably.

This was especially true after losing possession. Barcelona would engage in hectic counter-pressing, squeezing Mallorca and forcing mistakes in their play. These tactics seemed to work rather well as their guests couldn’t maintain possession, especially in the first half.

Notice below how Barcelona break off their usual defensive shape in order to put numbers in their pressing tactics, forcing Mallorca back and eventually making Reina clear the ball blindly.

The numbers clearly support this thesis as Barcelona registered 5.54 PPDA (passes allowed per defensive action), which is above their 2019/20 average, indicating they have upped their efforts in retaining possession quickly.

They made 76 recoveries on the night with a total of 45 happening in the opposition’s half, which is an incredible figure already. When we pair it up with Mallorca’s 98 losses with nine leading to a shot on goal, however, it completes the picture.

This also meant that Valverde’s troops had complete dominance over the proceedings, staying in possession and dictating play. But this is nothing particularly new as Barcelona usually always have more of the possession than their opposition.

The trick, this time, was to utilise it perfectly. They moved the ball quickly, averaging 7.41 passes per possession and 20.07 per minute and this, along with their positional play, made Mallorca extremely uncomfortable while defending.

Even though the guests were often sitting in a low and compact block, Barcelona continuously created and exploited the gaps in it. The build-up to Suárez’s breathtaking backheel chip was almost as impressive as the finish itself. It starts with Frenkie de Jong’s movement across Mallorca’ final third.

The Dutchman carries the ball from left to right, prompting the defenders to break their shape and contest it but everything unravels with one-touch football as Barcelona dance around all the challenges.

De Jong combines with Busquets, as seen in the example above, and then does the same with Roberto and the sequence ends with the midfielder bursting into the box to make one final lay off for Suárez’s wondergoal.

It was that kind of fast, one-touch football that successfully moved Mallorca across the board, making them leave gaps behind their backs which were seemingly exploited with ease. Roberto’s movement also plays a part as his run keeps the backline busy and enables De Jong to transition from left to right and then drags the other marker to create another pocket of space in the box for the Dutchman once again.

Even though they were outplayed for the entirety of the first half, Mallorca still managed to score two consolation goals on the night. Interestingly enough, both seem like isolated cases, with the first one coming off a deflected strike and the second courtesy of a rare Marc-André ter Stegen miscalculation.

With his team mostly pinned down in their own half with just 36% possession under their belts, Moreno’s tactics mostly revolved around breaking fast and deadly and getting the ball to Kubo on the far right side.

They managed to create five counter-attacks on the night and most of their most dangerous actions came down that right flank where Kubo operated. Notice in the graph below how the 18-year-old youngster – with the number 26 – is the most advanced player in the team and how his side is the only channel with any real xG value on it.

Interestingly enough, prior to their first goal, Mallorca actually started with a swift transition with Kubo setting it into motion by reclaiming the ball in his own box, carrying it into space and then releasing his teammate.

Even though Barcelona’s midfield of Busquets – De Jong – Rakitić worked quite well, it still lacked the pace to stop the bleeding in transitions and the same can be said for the centre-back duo of Clement Lenglet and Piqué. So once Mallorca got going and created numerical superiorities due to the defenders in red and blue not tracking back fast enough, they had a real chance of hurting their opposition.

Notice above how Kubo starts the transition and once they are in a footrace with Barcelona, they finally create a meaningful chance. As soon as Dani Rodríguez gets on the ball, he can win the race against Rakitić and leave Lenglet in the dust as well, creating a 2 v 2 with an additional man sprinting from the back.

The counter doesn’t yield them a goal initially but they do get a sustained period of possession during which they rattle the net in the end. A similar thing happened for their second goal.

It wasn’t a transition attack but as soon as Barcelona’s press was slow to react and as soon as they got some space out wide, Mallorca utilised it to run the Catalans over. They were slow to react and close down the opposition, which gave them enough time to capitalise. Notice below how the midfield can’t close the gap quickly enough and Mallorca easily enter the final third. 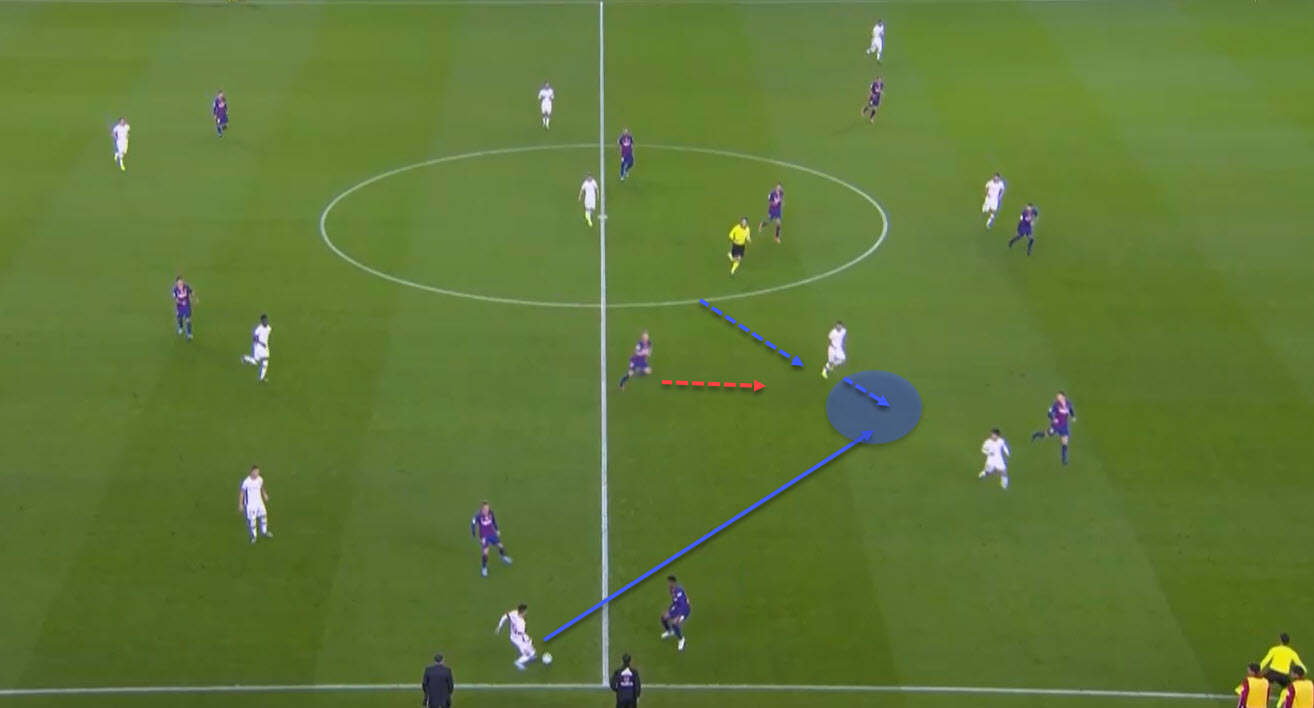 After that, Lenglet can’t deal with Kubo in time and even though Firpo eventually tracks back, Mallorca manage to create an overload and a 2 v 1 situation that eventually gives them a cross and Ante Budimir his brace.

Of course, Ter Stegen miscalculated his exit from the line but Barcelona made a series of mistakes in the build-up to that attack in the first place.

Barcelona’s incredible first half tactics already sealed the deal and there was no coming back for Mallorca once the Blaugrana’s front trio put four goals past them before the half-time whistle, as this tactical analysis has shown.

The guests’ narrow shape and the hosts’ rapid ball circulation and wing exploitation worked well to completely take Mallorca apart. Add some Messi magic to that and the recipe for success is already there. Barcelona now go into some crucial weeks for the supremacy of the top of La Liga while Mallorca continue their fight to stay afloat and above the danger zone.