Barcelona finally returned to winning ways after two consecutive blunders – one in the Champions League after their draw vs Slavia Prague, and the other in their defeat vs Levante in La Liga – and they’ve done it in style.

But even though a 4-1 victory does seem like a statement performance, a lot of it came down to the individual brilliance of Lionel Messi rather their cohesive tactical prowess.

This tactical analysis will aim to uncover both teams’ tactics and see how Barcelona edged out a struggling Celta Vigo at the Camp Nou.

Both teams opted for some changes ahead of the game. Ernesto Valverde decided to rest Sergio Busquets and Sergi Roberto replaced him in the middle of the park while Junior Firpo deputised for the injured Jordi Alba at left-back.

Samuel Umtiti also replaced Clement Lenglet and their now 17-year-old prodigy, Ansu Fati, started next to Antoine Griezmann and Messi in the forward line. Barcelona were deployed in their traditional 4-3-3 system.

On the other side of the pitch, we also saw some huge changes from the new coach and former Barcelona player, Oscar Garcia. The team were deployed in a largely unfamiliar 5-3-2 system, used for the first time this season, as opposed to their usual 4-4-2 which we saw in 64% of all of their games in 2019/20 La Liga campaign.

As far as the personnel go, Garcia also made some changes. The backline and the goalkeeper remained the same but the usual suspects in Fran Beltrán and Stanislav Lobotka were joined by Pape Cheikh while Iago Apas was partnered by Pione Sisto from the get-go.

Even though it’s far too early to tell how well Garcia will get his team to tick, the early signs are fairly optimistic and his squad is showing certain differences in their play already.

The new coach’s influence was probably best seen when his team were in possession as they often tried to build slowly from the back, keeping the ball and waiting patiently for an opening. In those scenarios, Garcia’s tactics instructed them to disperse their five-man defence into a four-man backline and push the full-backs higher up the pitch.

The interesting thing was how the roles of the full-back differed depending on the movement of their wider player. Above, we can actually see David Juncà cut inside, dragging Semedo with him and in turn creating space for his teammate out wide to receive the ball.

In other scenarios, the full-backs would overlap instead of underlap, and that would give them a chance to get isolated with Barcelona’s defenders. In those cases, we often saw long balls being deployed from the back in an effort to successfully find their runs with passes from the back.

Interestingly enough, they were quite accurate in their attempts with 64.58% of their long passes finding their targets as opposed to Barcelona’s 56.67%. And even when they weren’t looking to slot a through ball into space, playing from the back to enter the final third had a major role in their tactics.

Below, we can actually see two examples of how Garcia had his centre-backs be brave in possession and use Barcelona’s lacklustre press to their advantage. The ball can easily be played to a dropping teammate in the left and the right half-space respectively. 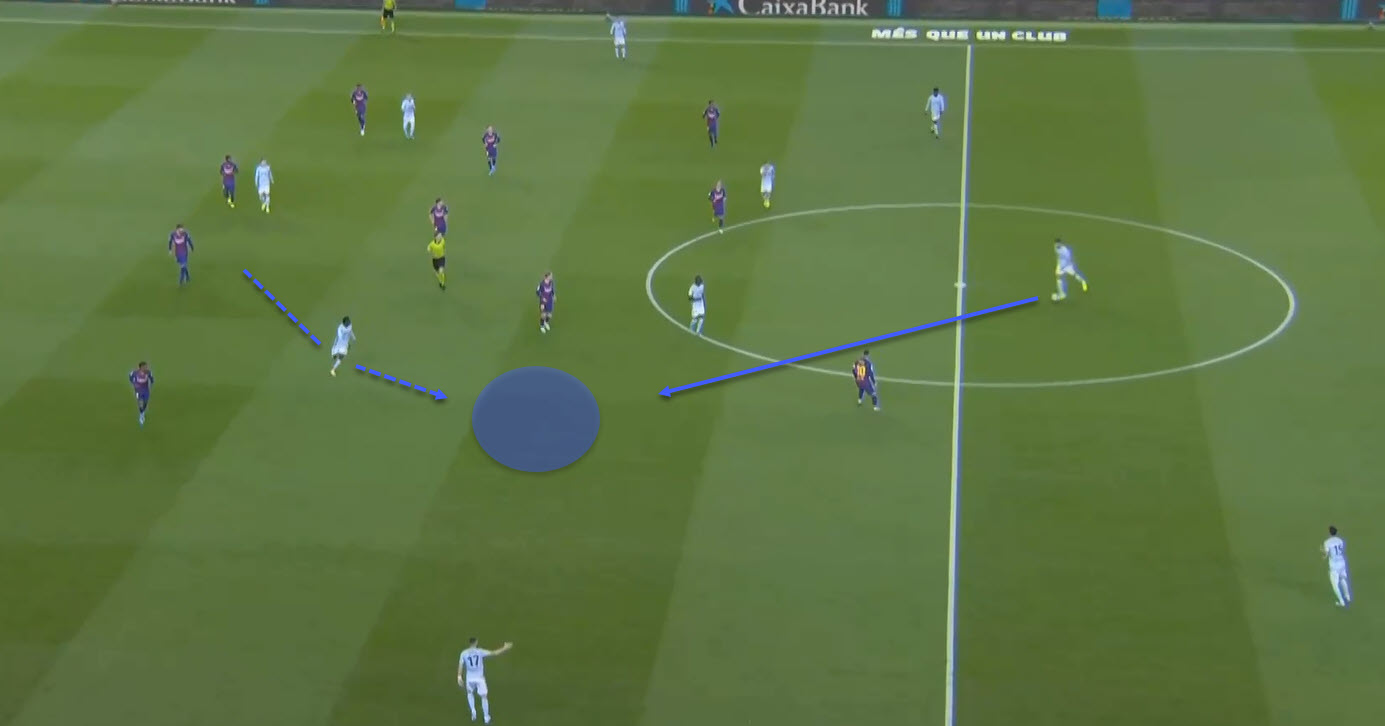 The Blaugrana did, however, cause their guests some trouble in their build-up. Usually, Celta Vigo would have a single anchorman in midfield who would constantly drop deeper to receive the ball. But some jitters were visible in their legs and Barcelona actually managed to pin them down successfully and snatch the ball away on a couple of occasions, which we will show further down the line of this tactical analysis.

But Celta Vigo actually managed to keep the ball fairly well – even better than Barcelona in the opening stages of the game. Recycling possession in the back and then aiming for their dropping targets from the forward line once a chance was presented to them seemed to work rather well.

And that was definitely a theme in their attacking tactics: holding possession and entering the final third with a swift interchange of positions between their players – either a forward dropping and a midfielder assuming his position, or simply an interchange between the two forwards, Aspas and Sisto.

Notice below how that interchange would usually work. In essence, it’s a rather simple swap of positions that aims to disrupt the opposition’s backline by pulling the defenders out of their standard shape. 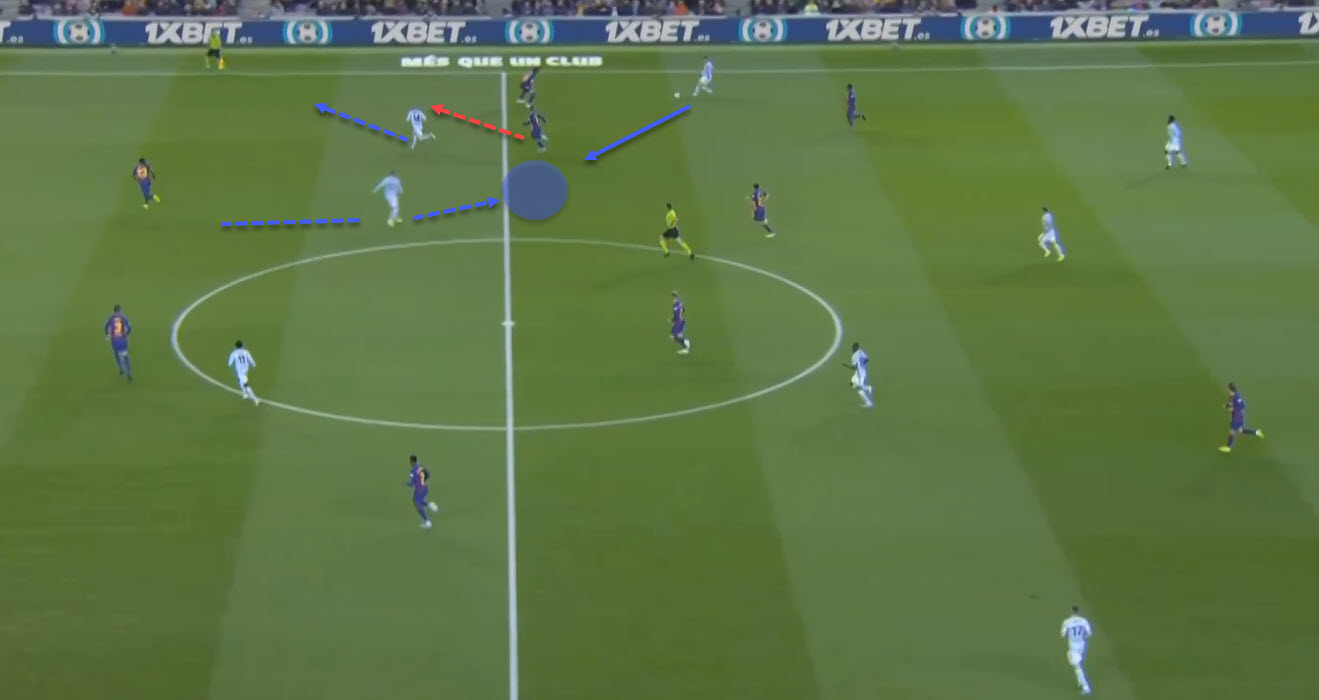 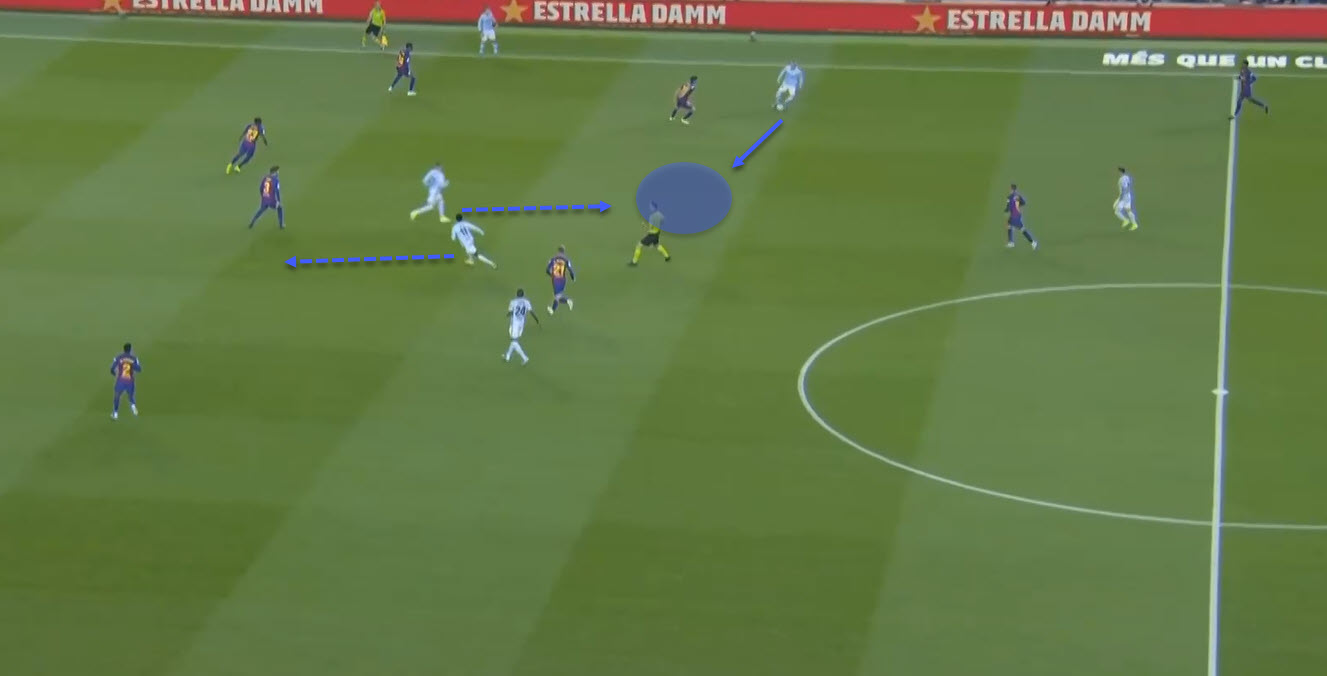 In both scenarios, Celta Vigo aimed to create space either to receive the ball in the final third or to send their forward blazing behind Barcelona’s line of defence. In theory and on paper, that was a clear plan in their tactics but in the end, it didn’t yield them much in terms of palpable results.

The home side was extremely aggressive in their approach and that was probably best visible in the way they defended. Barcelona playing with a high defensive line is nothing particularly new but in the game against Celta Vigo, we constantly saw them around or even beyond the half-way line.

The full-backs would bombard forward in a more general scenario, as they did this time as well, but when they stayed back, the backline was still in a more advanced position, as can be seen in the example below.

This was done to push the opposition back and squeeze the ball out of their feet, making the pitch smaller for them in the process. This did result in snatching the ball away in favourable positions for the Catalans.

With the forward trio of Fati – Griezmann – Messi, Barcelona were more effective in their overall pressing tactics, but further analysis will show that it dropped off in the later stages of the game.

We can see an example of Barcelona’s successful attempt of pressing tactics below. They push Celta Vigo wide and use their cover shadow well to negate them a way back. The ball, however, can’t be played forward either without any risk, and enough pressure eventually results in a ball out of play.

This proved quite effective as the away team tallied 96 losses while the Catalans managed to register a total of 65 recoveries on the night, edging out Celta Vigo by one in that regard.

When not pressing, Barcelona would revert to their standard 4-4-2 formation with Messi and Griezmann often staying as the highest positioned players in the team.

It was interesting to see how their pressing tactics were less intense when Luis Suárez entered the pitch. From that moment on, Barcelona defended with eight men while the duo of Messi and Suárez remained higher up the pitch. 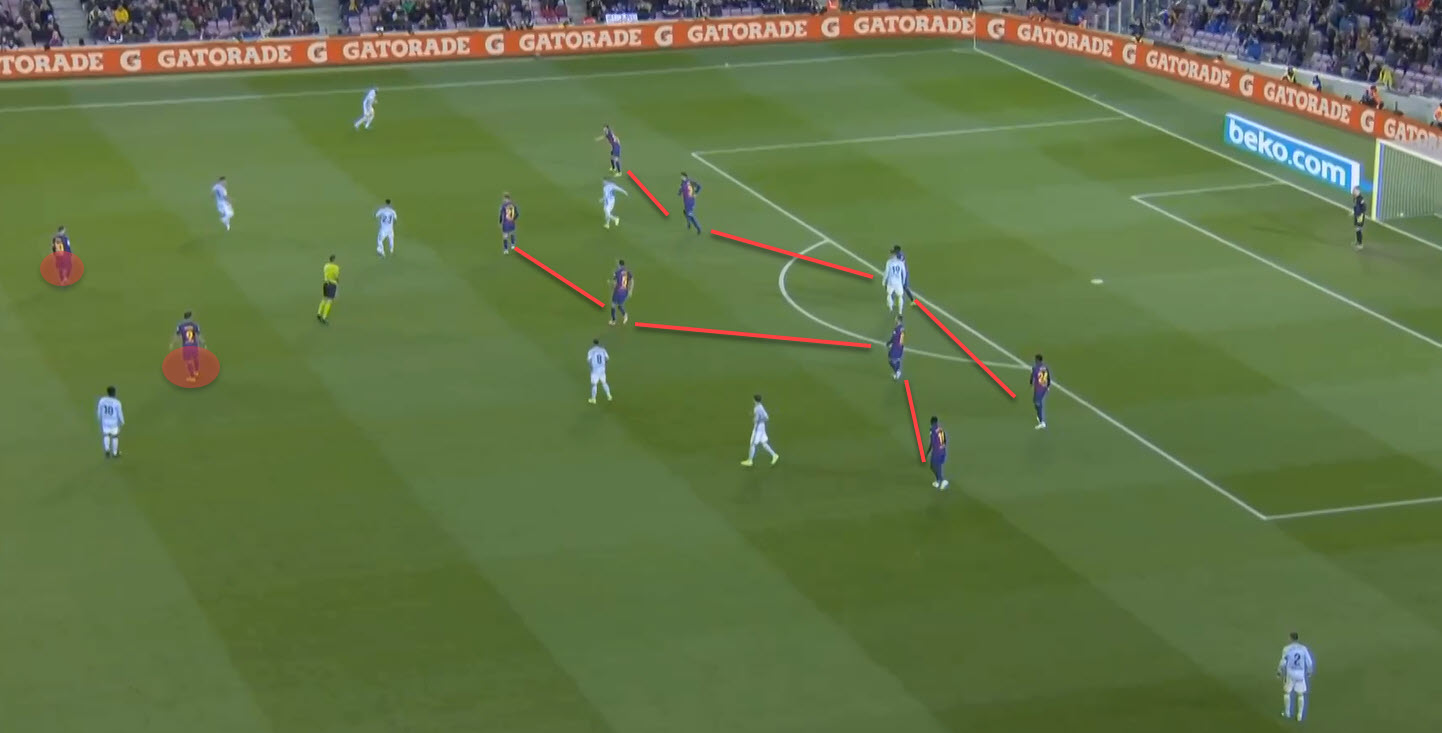 This did give Celta Vigo a slight attacking edge but ultimately, they couldn’t make use of it.

Garcia’s men had a similar plan – their approach varied between pressing aggressively and dropping to a compact and narrow block. When going higher up the pitch, we would often see them in a system that effectively mirrored that of Barcelona, often even down to a single man.

This was pretty effective in the early stages of the game when they had the stamina and the legs to sustain a more aggressive approach. As we have already mentioned, they tallied 64 recoveries throughout the night and even managed to have prolonged phases of possession.

That happened once in the beginning when they were even in control and once in the latter stages of the game when Barcelona slowed down in their own approach. This can be seen in the possession graph below that depicts Celta’s time on the ball.

But when they were not pressing high and trying to win the ball back aggressively, Garcia’s tactics were to sit deeper in a narrow block that had two clear goals: shut down all central channels towards the forwards and force Barcelona wide.

Interestingly enough, it was in those cases that they would revert to a five-man defensive line as opposed to the quartet they deployed when in possession and starting attacks from the back. 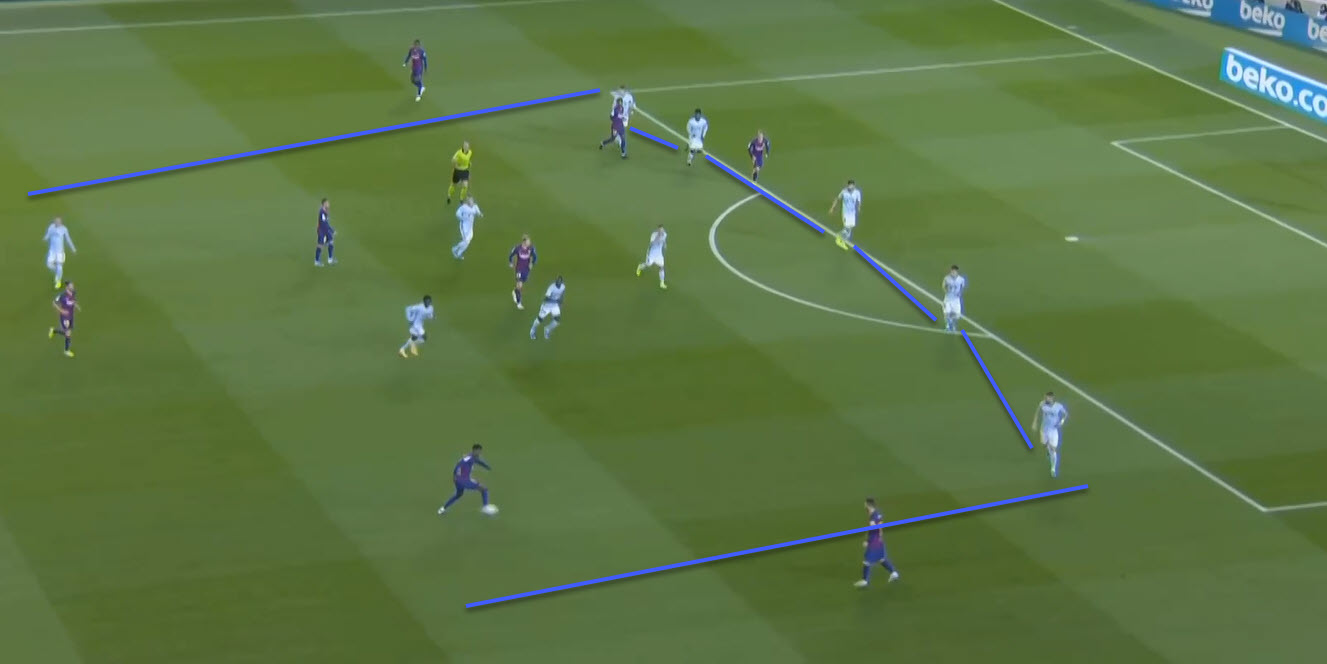 Notice above how compact and narrow their shape suddenly becomes and Barcelona have trouble progressing through the middle for that exact reason. Apart from a couple of quick one-two passes and combinations that moved the ball at high speed, Valverde’s troops had difficulties navigating through Celta Vigo’s block and putting their players in isolated situations against the defenders.

While this may seem like a statement that would surprise absolutely no one, Messi was once again the difference-maker for Barcelona. But even when we put his set-piece hat-trick aside, the Argentine did an awful lot in the game.

By this point, Messi dropping deep to create is nothing particularly new, but it felt like against Celta Vigo it was more needed than in some of the other games. Barcelona struggled to retain possession in the early stages of the match and even Messi himself lost a couple of balls, including the one that ended up giving away the free-kick for Celta Vigo’s only goal.

But Messi was constantly involved in everything on the night. He would drop deep into the midfield and carry the ball forward. Interestingly enough, Barcelona would change their shape accordingly when that happened.

Below, you can see how Busquets dropped to the position of a right-sided defender so that Messi can cut inside and Roberto can burst forward out wide.

That way, Barcelona would have a backup defender in case the ball was lost. Ironically, it was this exact situation that resulted in a lost ball and an eventual goal for Celta Vigo but generally, it did plug the holes effectively.

In other instances his presence would create numerical superiorities in the middle of the park, making sure Celta’s trio couldn’t box in their quartet of Busquets – Arthur – De Jong + Messi. 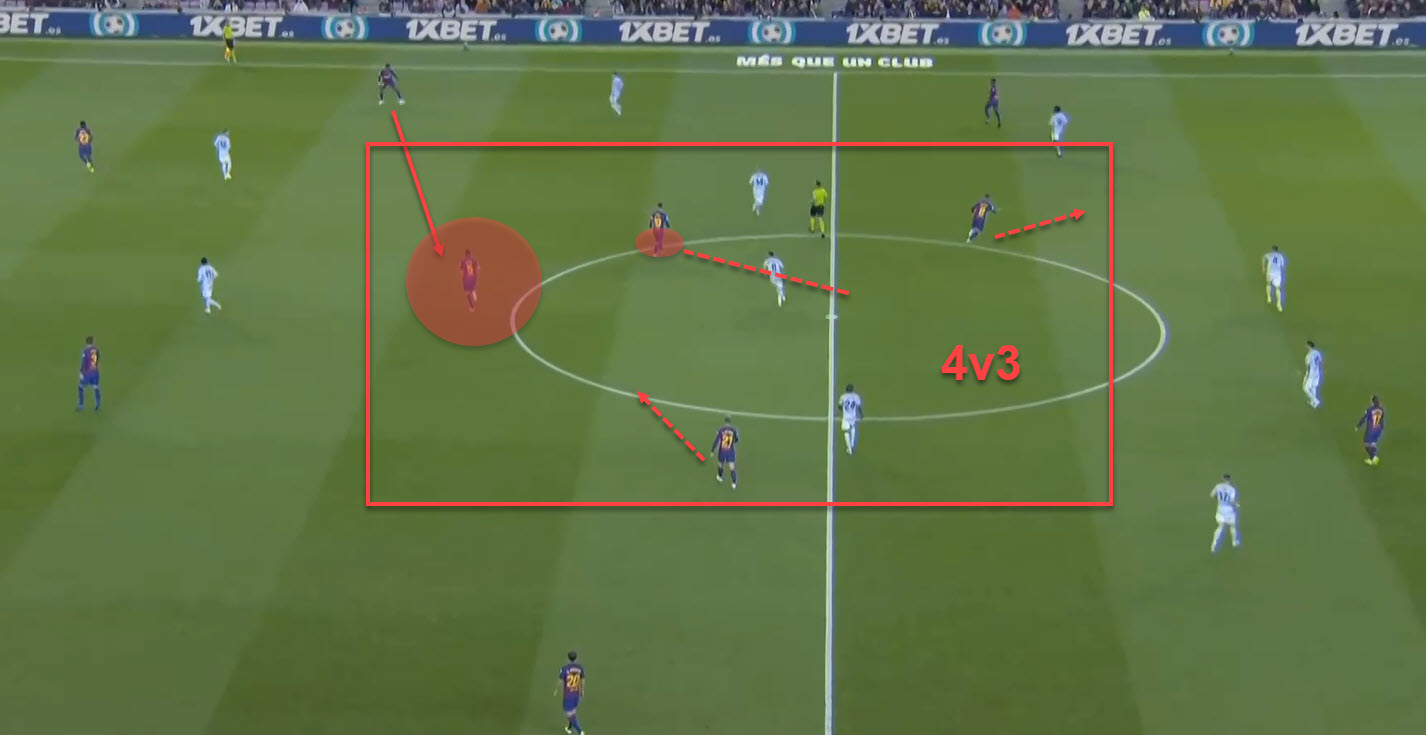 But even that didn’t really give Barcelona that extra edge they were so desperate for. Sure, they would get to the final third and string a series of passes together but it was not particularly dangerous for the visitors.

In the later stages of the game and once Dembélé was introduced, Barcelona did get some extra spice for their attacks when the Frenchman was left in isolated scenarios with Celta’s defenders but generally speaking, it was a game decided by set-pieces.

The final xG values stood at 1.62 for Barcelona and 0.62 for Celta Vigo, which is actually a good representation of the game itself.

Even though the 4-1 scoreline might suggest otherwise, this wasn’t really an impressive and dominant victory by Barcelona as it felt like they needed their Argentine magician more than ever. Valverde’s troops seem to be reliant on individual brilliance as opposed to great tactics and hopefully, this tactical analysis has shed some light onto that.

Celta Vigo, on the other hand, are at the beginning of a new chapter with Garcia and some changes can be visible already. Only time will tell how successful the former Blaugrana man is going to be at his new home.