The era of Niko Kovač at Bayern is over. After a devastating 5-1 defeat against Frankfurt last week, Bayern decided to sack the Croatian and move on with Hans Dieter Flick as interim coach. Therefore, the German Clásico at the Allianz Arena this weekend between Bayern and Dortmund promised to be an interesting clash. With both clubs performing below expectations thus far this season, winning this prestigious battle was important for both of them. In the end, Bayern hammered Dortmund beating them 4-0 and secured the crucial three points.

Our tactical analysis will show the reasons for this great win by Bayern and explain why Dortmund were not able to stand against the Bavarians.

Flick decided to use a 4-1-4-1 with David Alaba and Javi Martínez as centre-backs. Alphonso Davies played left-back, while Benjamin Pavard played right-back. This unusual back line was formed due to injuries on the one hand and Flick’s decision to play Joshua Kimmich as a deep-lying playmaker on the other hand. Further on in midfield, it was somewhat surprising that Leon Goretzka and Thomas Müller started instead of Thiago and Coutinho. With this decision, Flick showed that he rather preferred a more pressing-oriented approach, using players who run a lot.

His counterpart Lucien Favre used a 4-4-1-1 formation with Mario Götze and Julian Brandt up front. Jadon Sancho started on the right wing even though he was injured. Towards the end of the first half, he had to be substituted. With Marco Reus and Paco Alcácer being on the bench for similar reasons, Favre had difficulties finding a suitable starting XI. 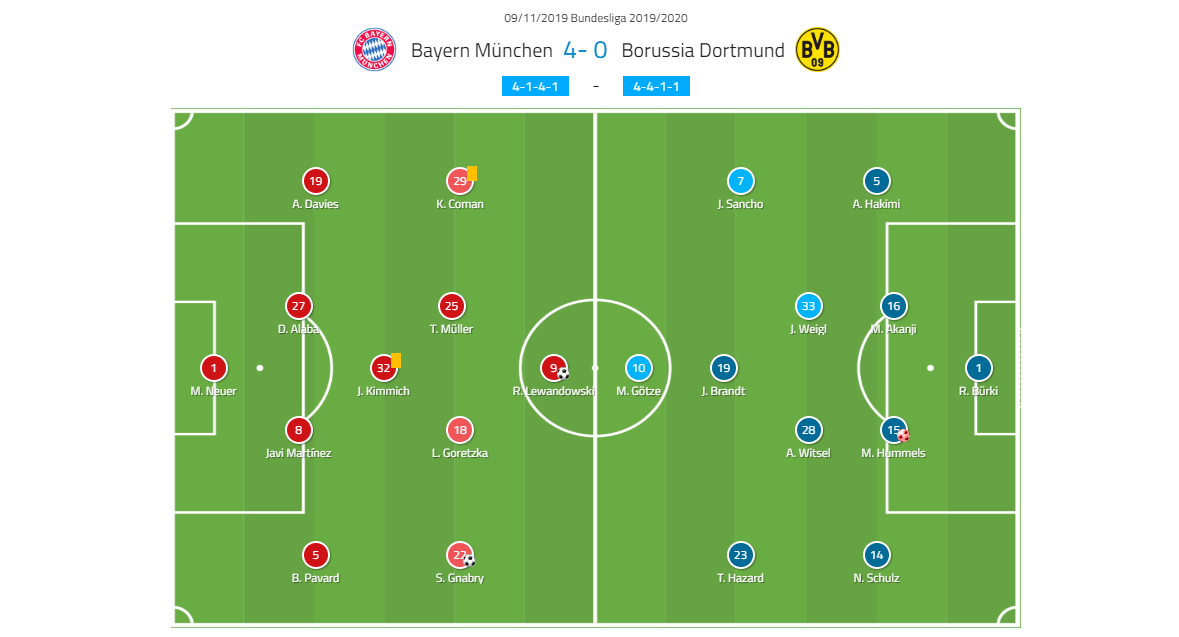 The image below shows these theoretical line-ups taking shape on the pitch. Bayern’s back four stays U-shaped, while Kimmich is the lone holding midfielder. Goretzka and Müller push high, while Serge Gnabry and Kingsley Coman stay wide.

Dortmund’s 4-2-3-1-like shape is also visible. They more or less mirrored Bayern’s midfield triangle at first. The back line pushed rather high but went deeper as the game progressed. 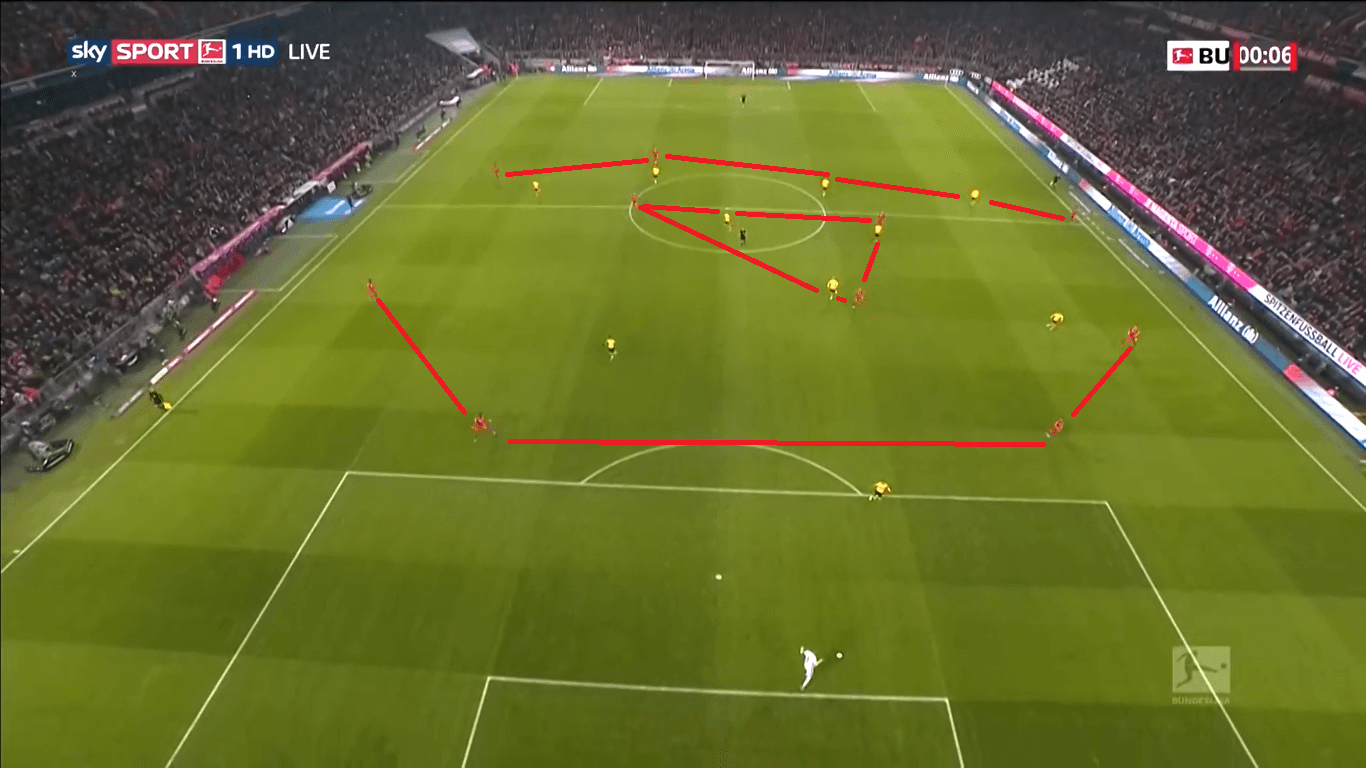 In the last decade, Bayern was truly one of Europe’s best possession game teams. In the last couple of years though, their possession game slowly but surely worsened. As implementing such a philosophy usually takes a lot of time, Flick did not seem to bother himself with that. Instead, the game plan in the first half relied on vertical play towards Robert Lewandowski as well as high-intensity pressing. 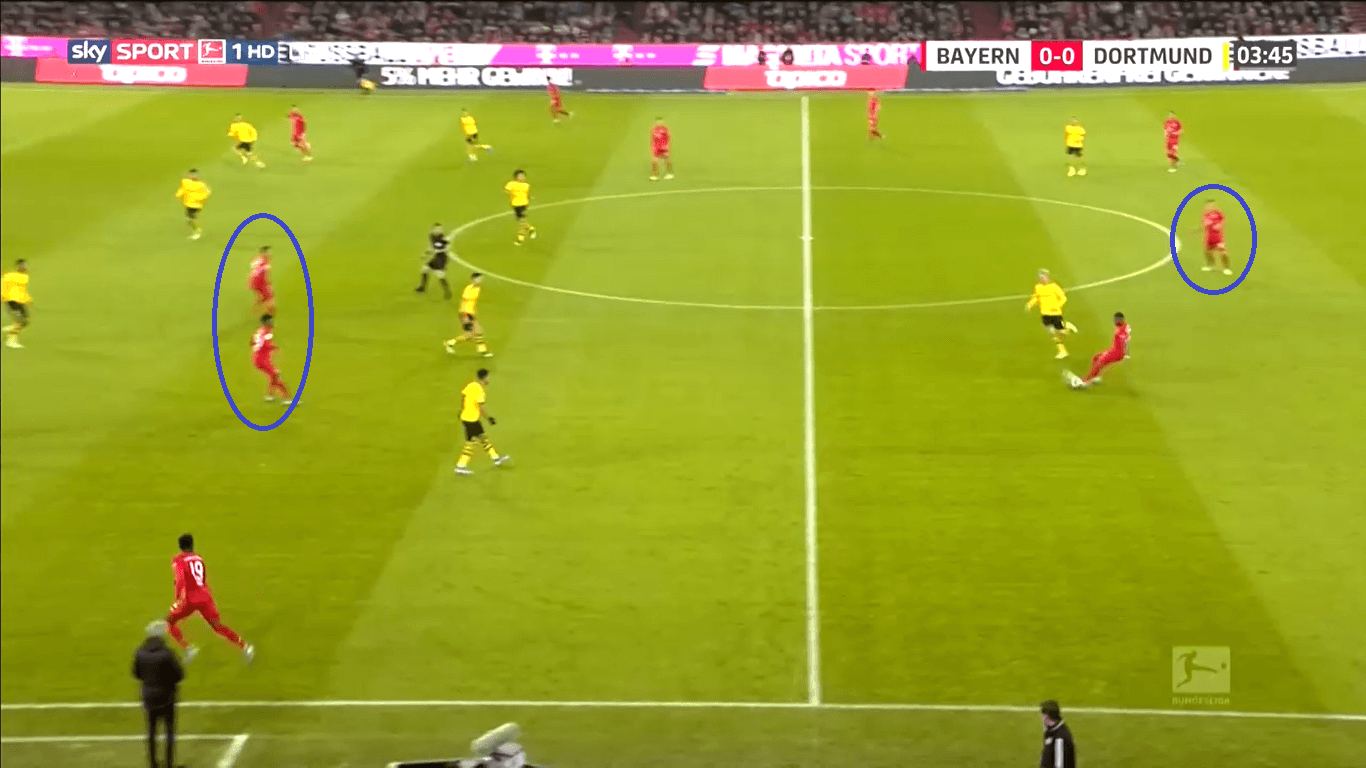 The image above is a perfect example of that game plan. As Brandt and Götze tried to pressure the centre-backs, Kimmich (circled in blue) fell back to provide superiority. This created a huge hole in Bayern’s midfield. With Alphonso Davies pushing high on the left wing, Kingsley Coman moved into the half-space occupying the same space like Müller. Thus, Alaba decides to play a high long ball to Lewandowski. 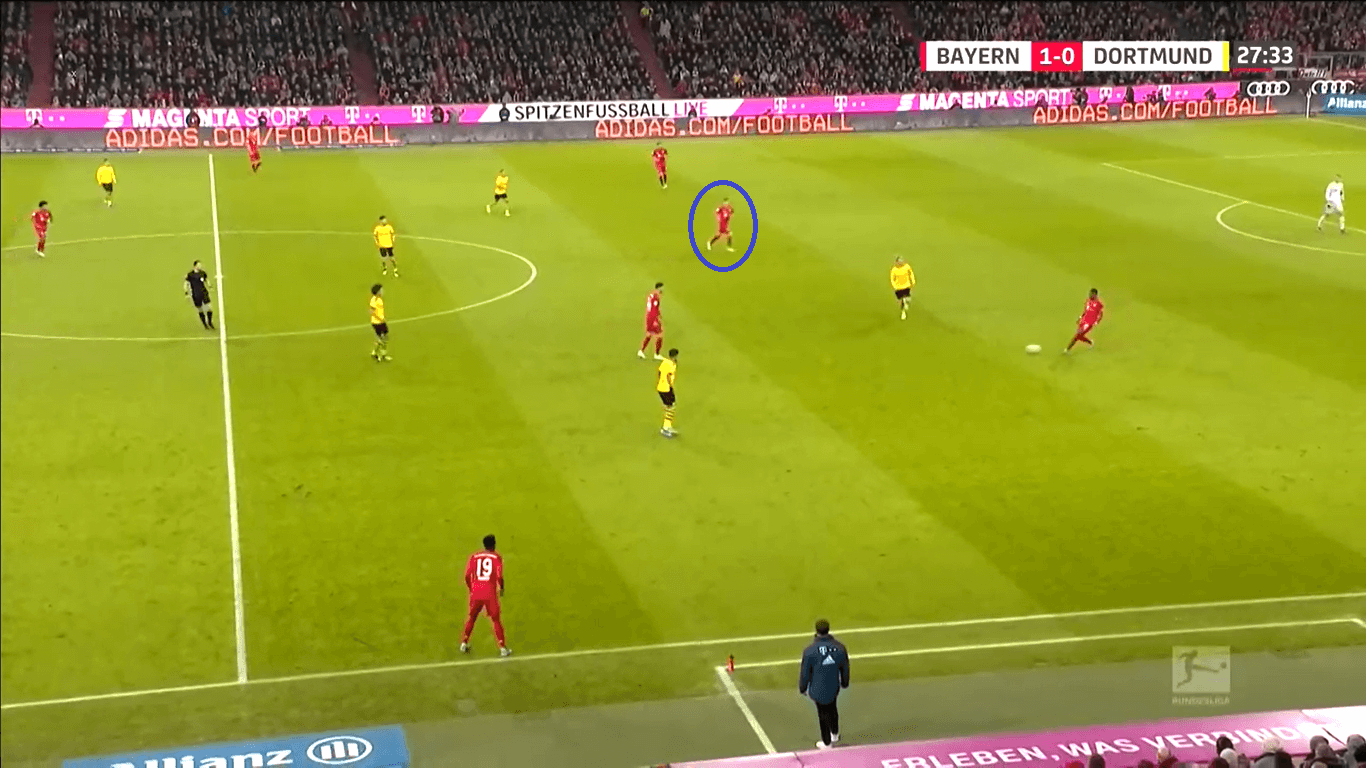 This turned out to continue, even when Dortmund were only pressing with one forward. Kimmich’s movement created problems further up the pitch, as Bayern were not positioned well. 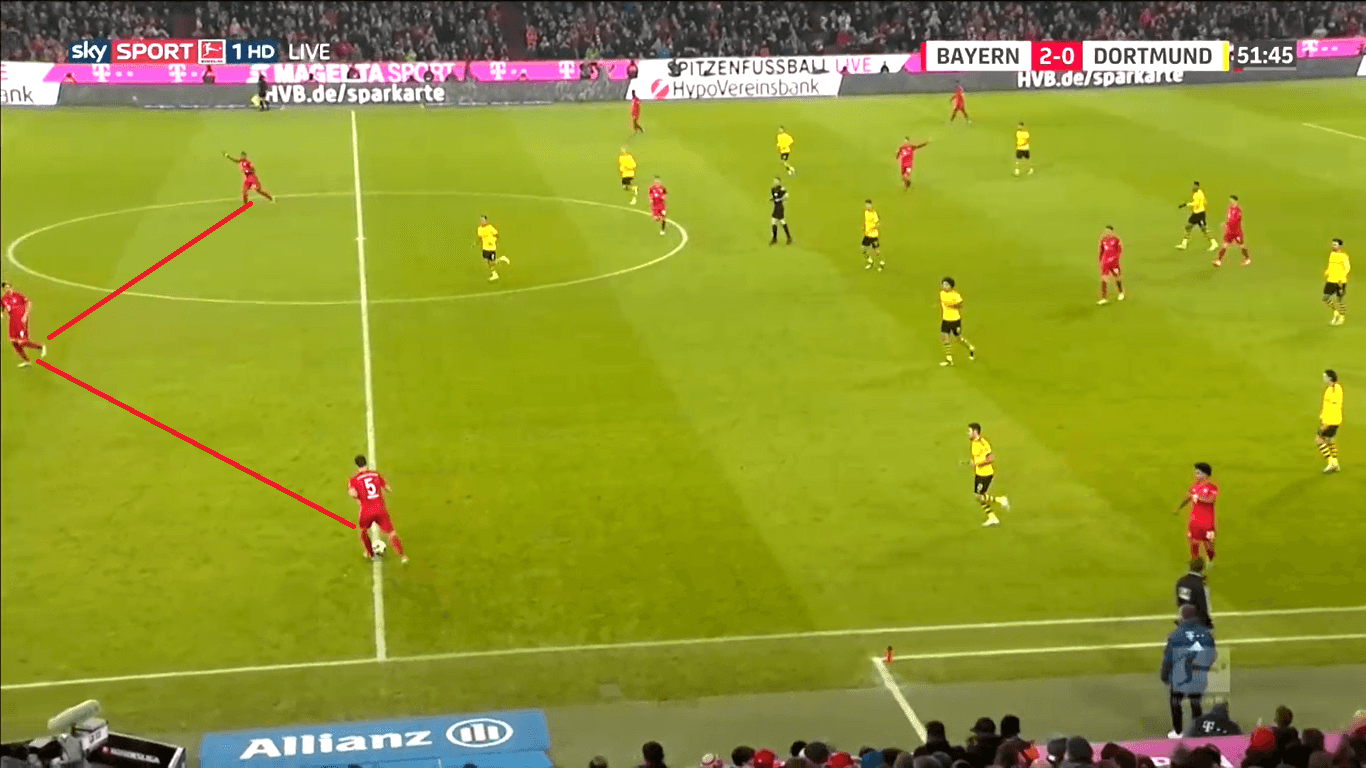 In the second half, Pavard was somewhat more reserved and created a back-three occasionally, like in the image above. Even though this was more fluid positioning, it enabled Kimmich to stay in position. Thanks to that, Bayern’s positional play looked way better and they were much better able to control possession. 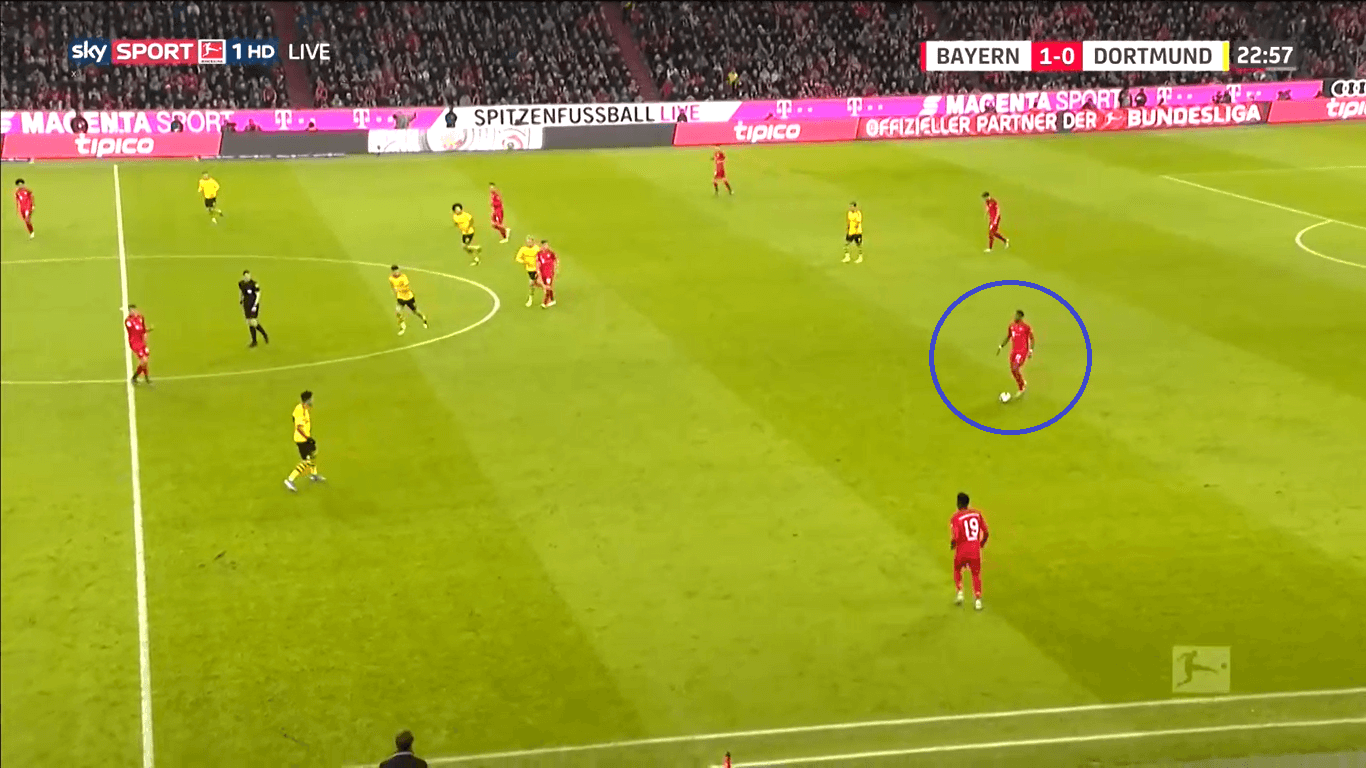 Even though Bayern had difficulties with their positioning in possession, they had no problems during the build-up. One of the main reasons for that can be seen in the image above. Dortmund were not able to put pressure on the ball – they were extremely passive and gave Bayern’s build-up players enough time and space. Alaba and Martínez who can also play in midfield could take advantage of that, especially Alaba who played some great balls forward. 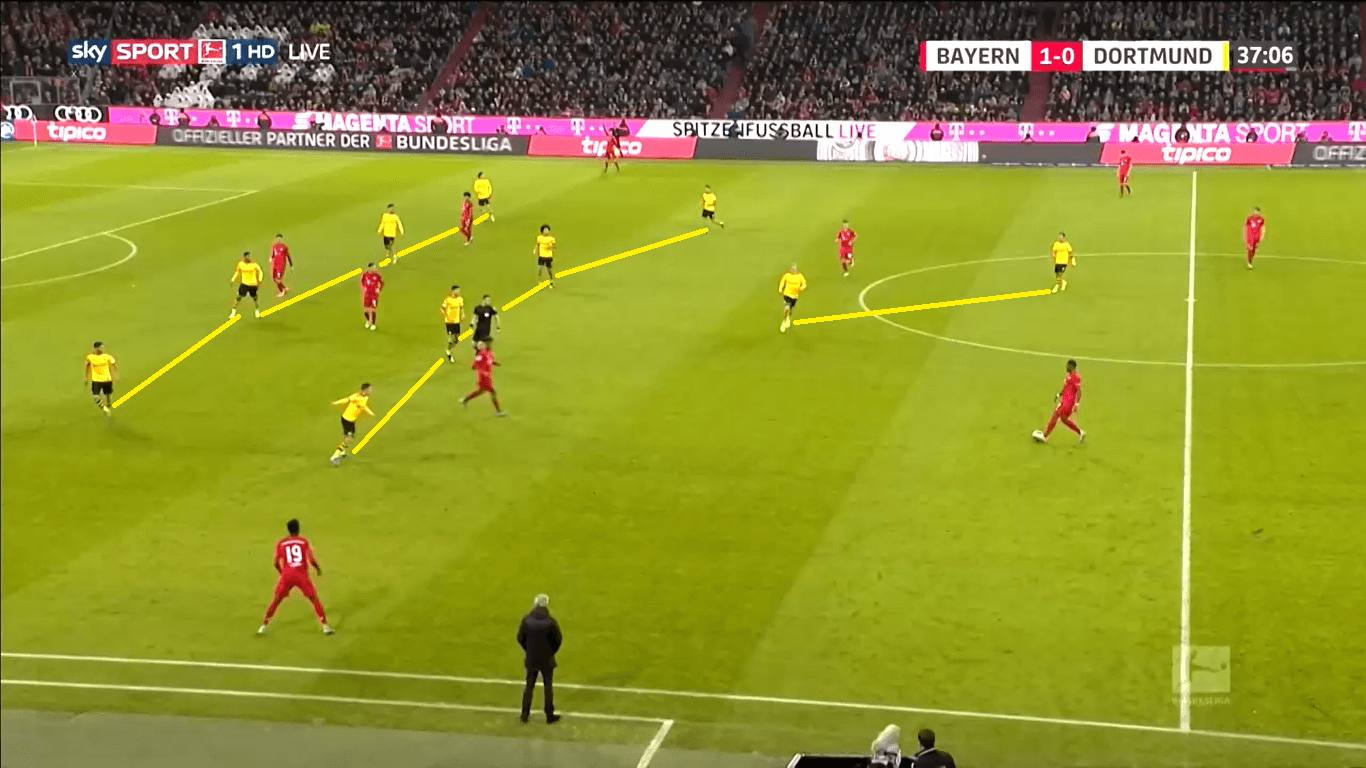 Here, we can even see a better example of how Dortmund defended in a passive 4-4-2, just trying to close passing lanes and control the space. Unfortunately for them, this did not work well. As Bayern certainly have the technical ability to outplay the press well, it nonetheless could have been a better approach to show more aggression and press occasionally, not allowing Alaba and Martínez to play dangerous long balls.

Bayern, on the other hand, had a different approach. Flick put the focus on defending more compactly. Also, he mentioned in the press conference that he wants his team to defend forward. 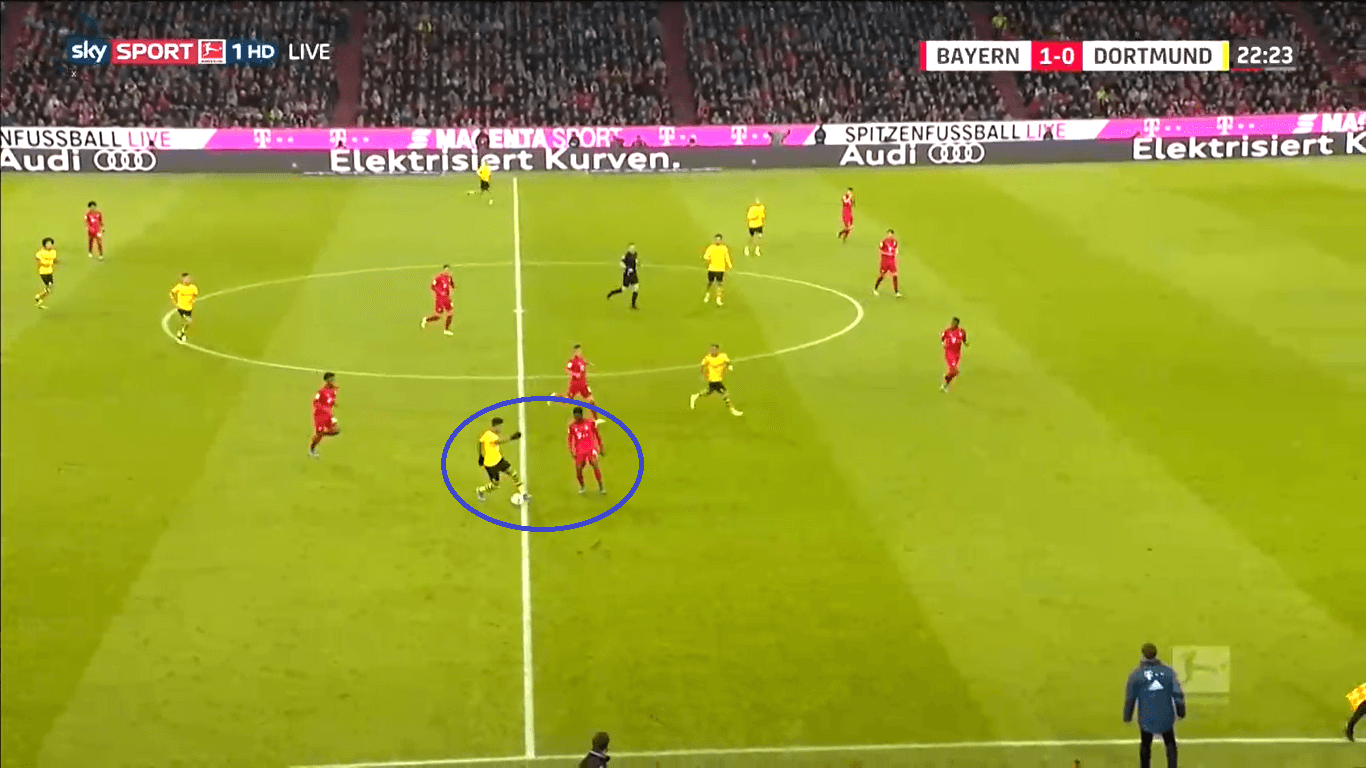 19-year-old Alphonso Davies for example, who played a fantastic game, moved out almost always to stop Jadon Sancho immediately at the first touch.

The same applies for Martínez in the image above, moving out of the back-four into the midfield just to hinder his opponent from controlling the ball. 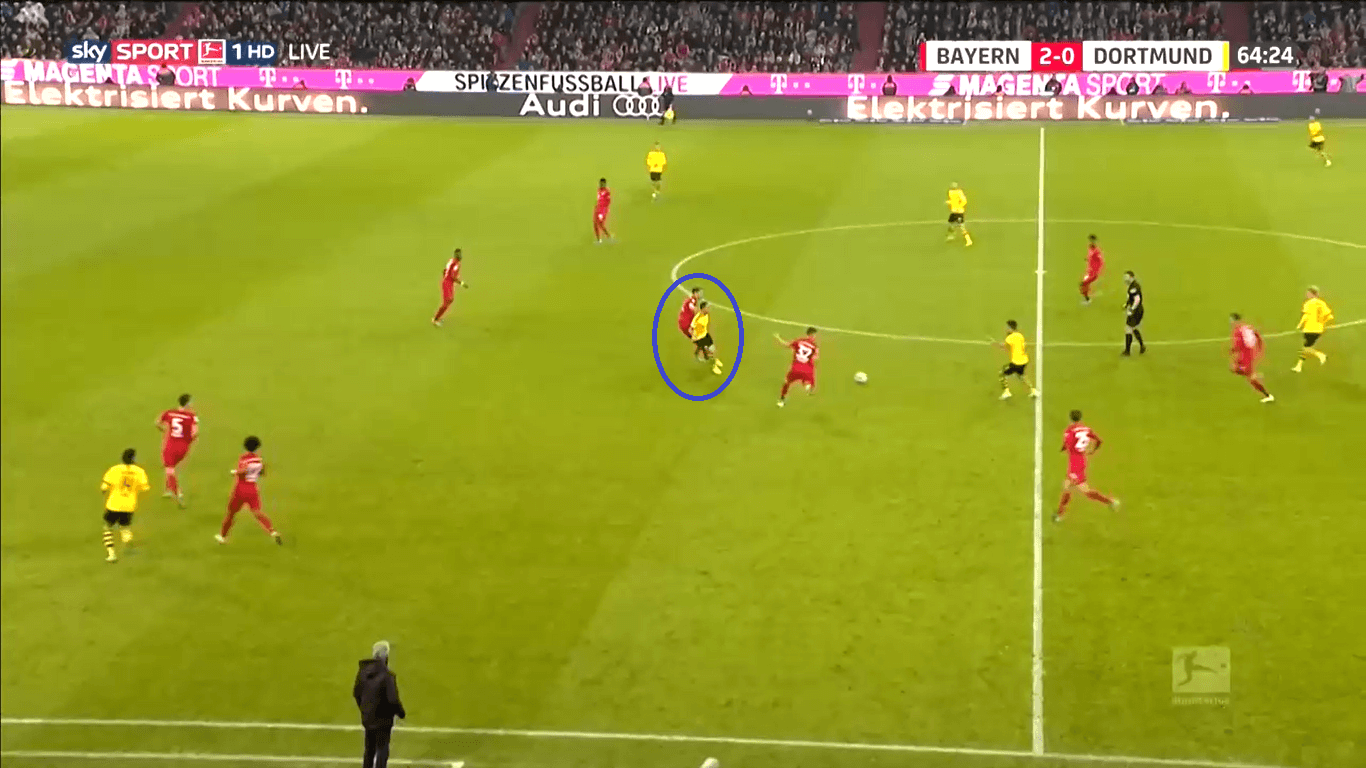 There are many more examples, which shows that this was a clear tactical plan. Bayern were aggressive no matter what – if it meant that leaving the position was necessary, then that was ok as long as there was pressure on the ball. Nonetheless, Bayern were able to remain compact and not leave space between the lines. 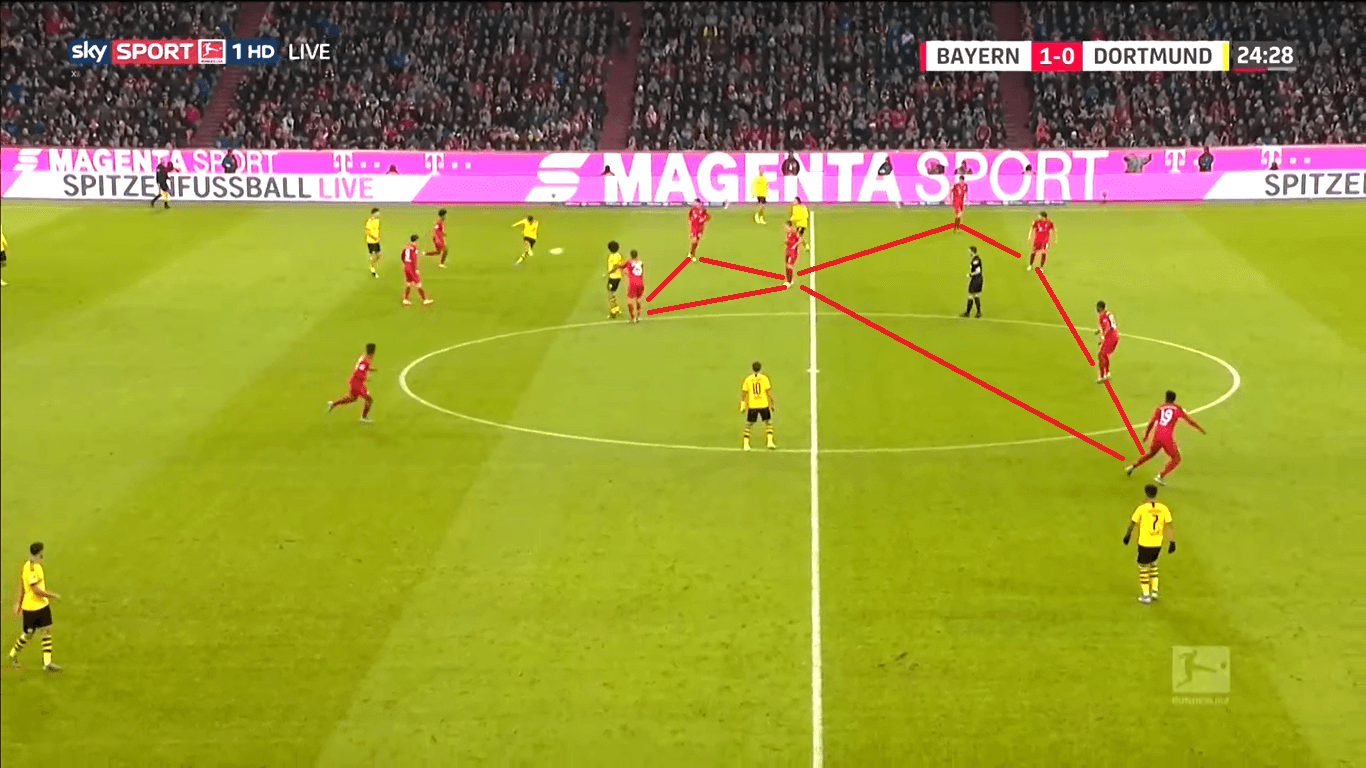 Bayern’s back line was extremely high, probably the highest since Pep Guardiola’s days in Munich. Thus, Bayern were able to minimize the space between the lines. As we can see in the image, there are only about five meters from Martínez to Kimmich. In this example, Dortmund try to play a long ball behind the back line to Sancho, who does not make that run. Generally speaking, Dortmund’s line-up helped Bayern perform this tactic since Götze and Brandt do not have the speed to make those runs behind the back line. With Sancho not being fully fit and Davies defending him well, Dortmund had no viable offensive plan. Götze and Brandt, who are great in the space between the lines, did not find any space there and Thorgan Hazard who played on the left wing was almost invisible.

Also, when Brandt played somewhat deeper, the same problems still occurred as Bayern were able to stand extremely high and minimise the space, like in the image below. 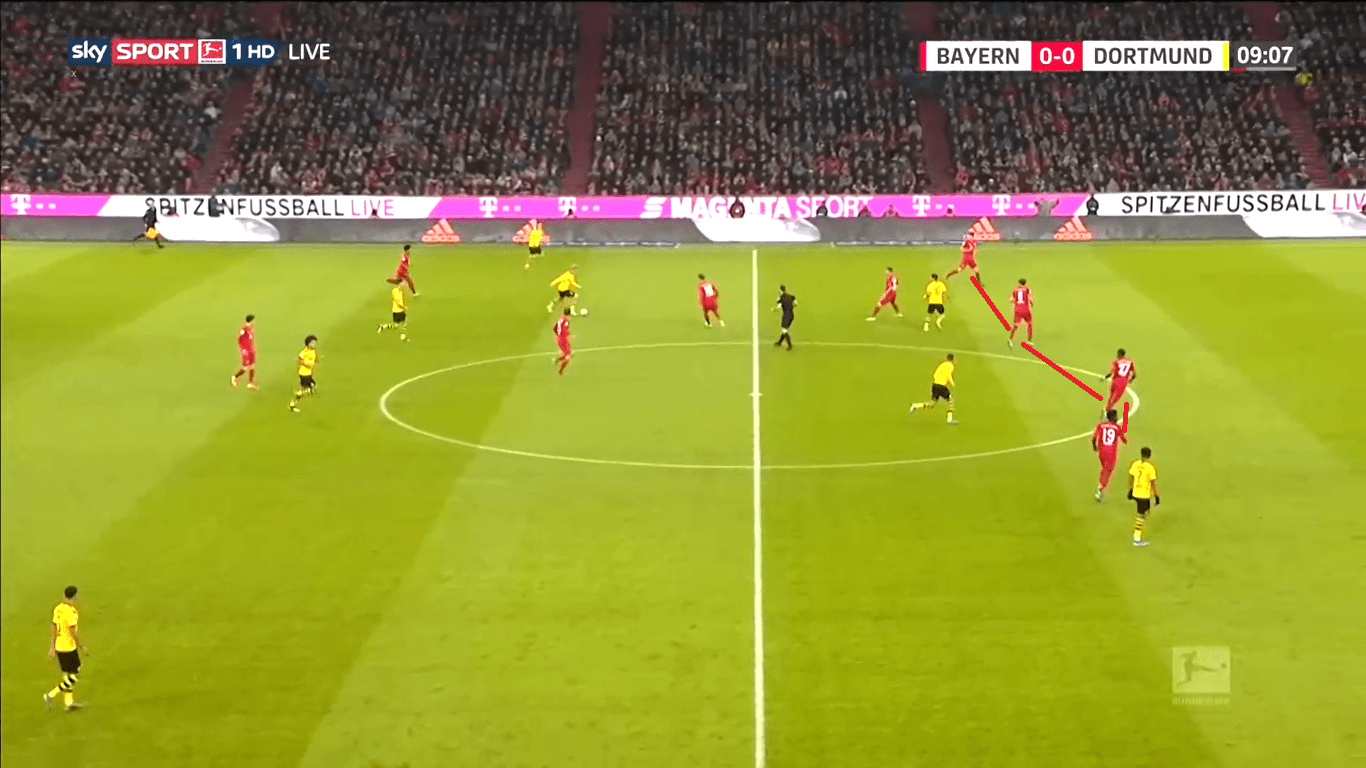 Rarely were Dortmund able to push Bayern back. Bayern then tried to get as many players behind the ball as possible, like in the image below. 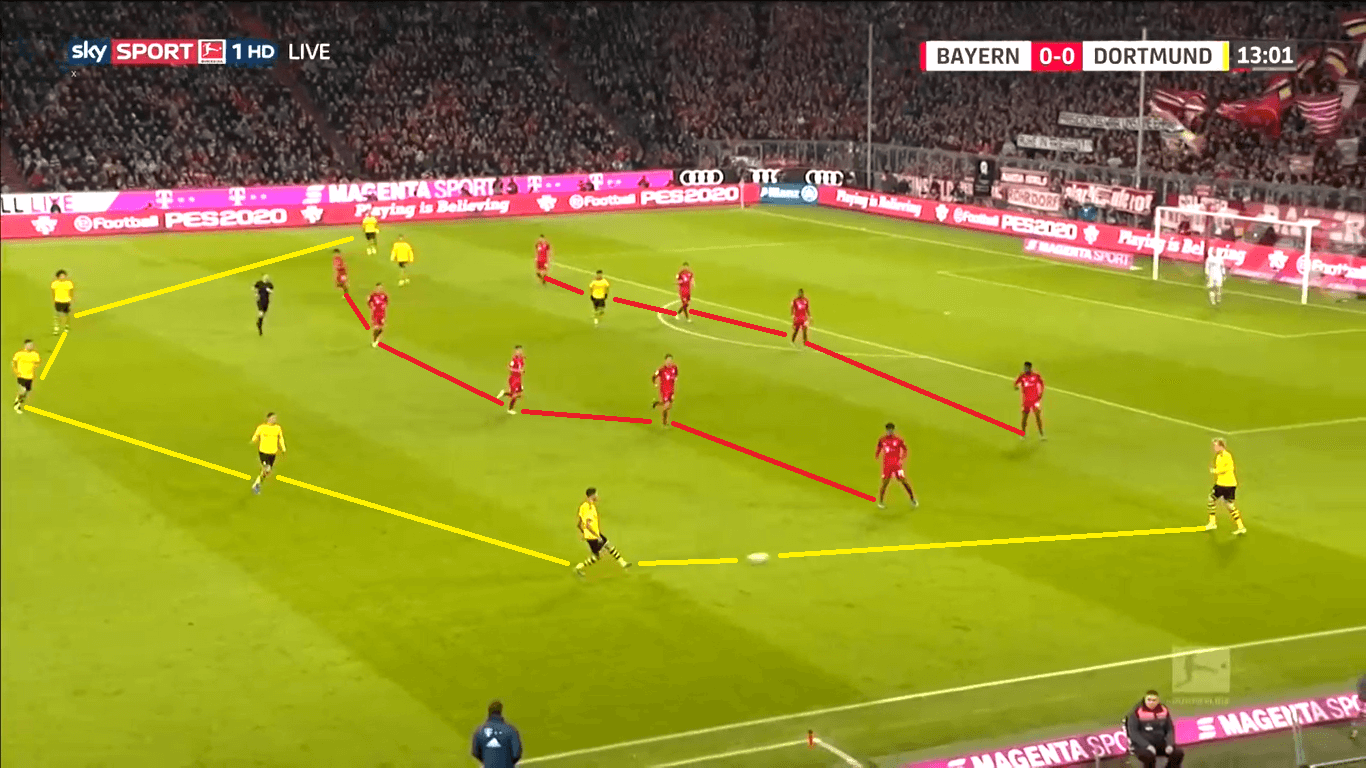 Here, one of Dortmund’s main problems becomes visible. In this U-shaped positioning, they were able to move the ball but the centre is so tightly guarded that it is impossible to break through. As Dortmund played with no real striker, there was no threat at all, so Bayern didn’t have to worry about a cross or anything.

In a few situations though, when Bayern’s counter-pressing did not work well, Dortmund had the chance to quickly counter-attack. 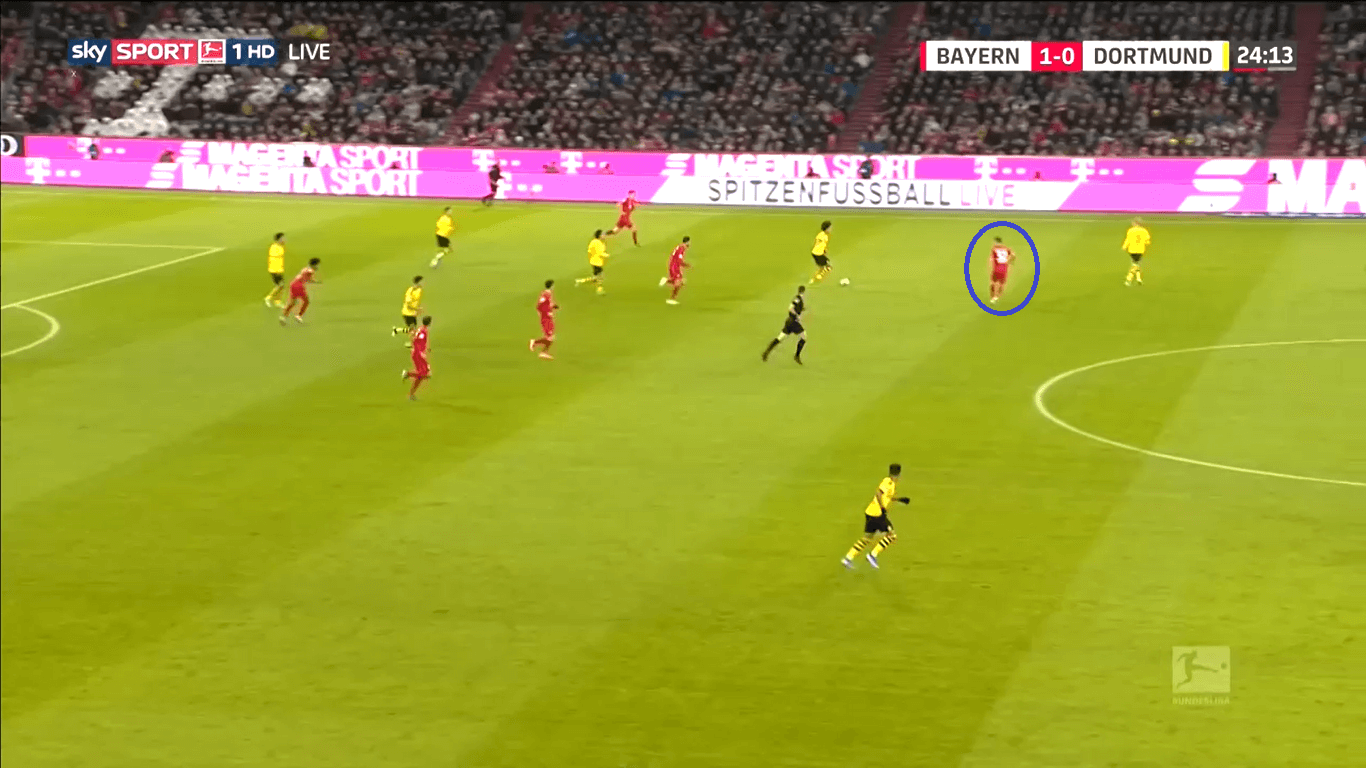 Here, Kimmich opposes Axel Witsel but has no chance of stopping the pass, as Bayern’s press was outplayed and they are exposed. For a side not being able to find solutions against a compact opponent, these kind of situations are extremely valuable. However, Dortmund were not able to attack with tempo here either, wasting counterattacks as well. 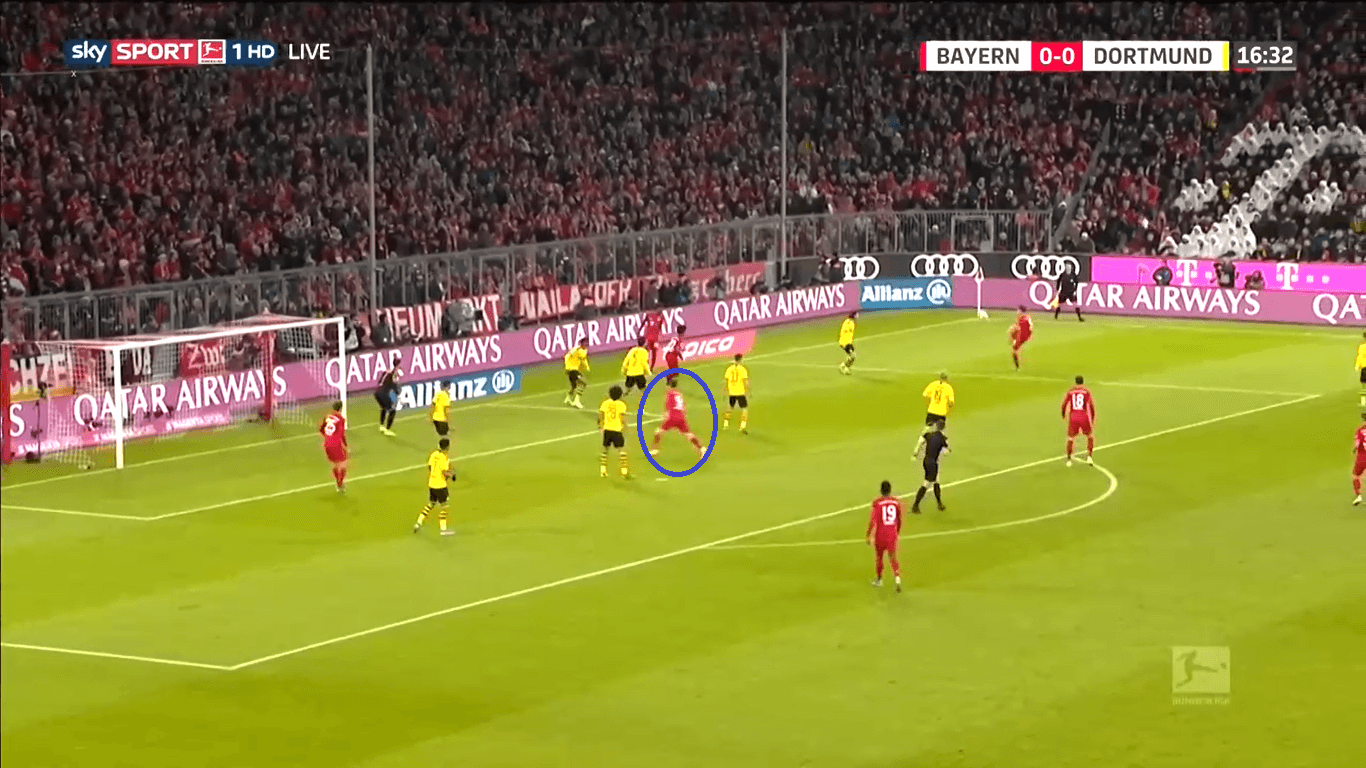 The first goal by Lewandowski could have been easily prevented if one of the three players near Coman would have made two or three steps back. While all eyes are on the ball, Lewandowski makes the run and scores. 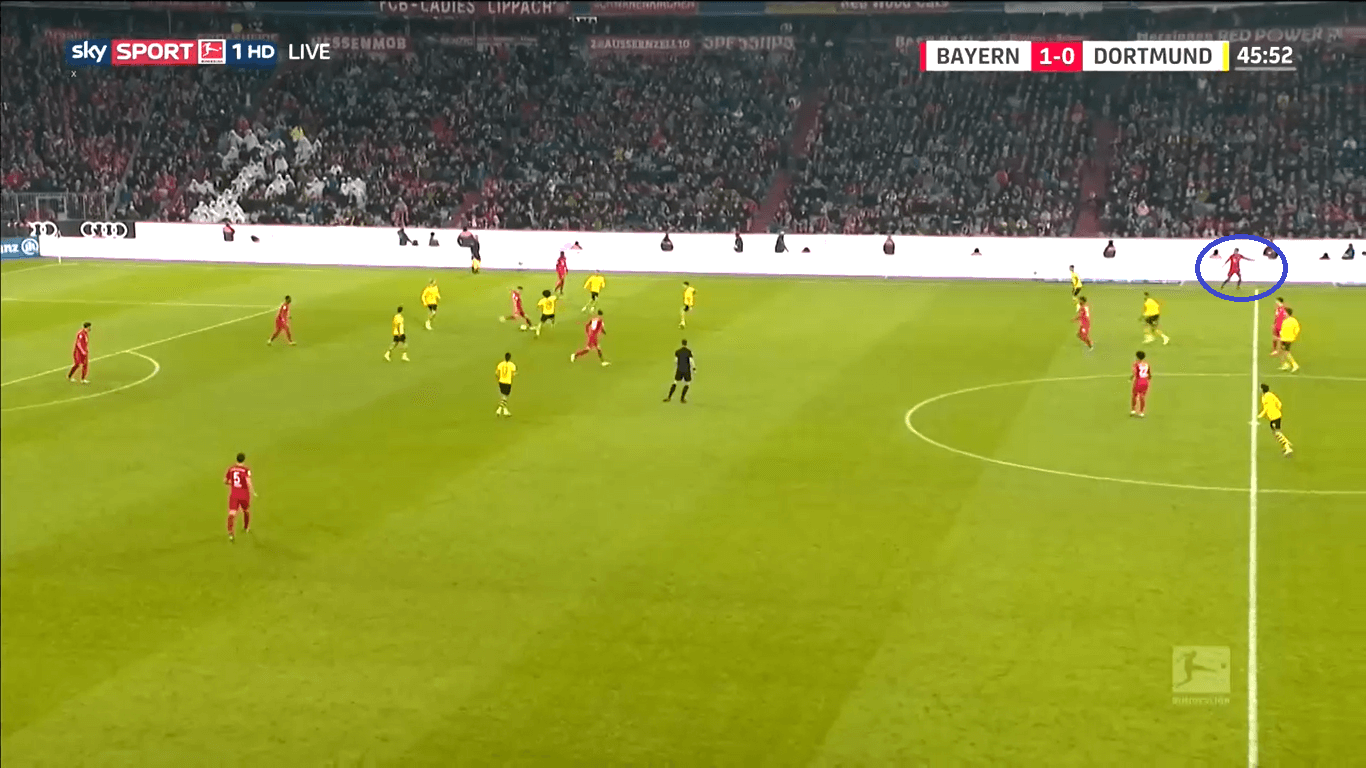 Looking at the second goal right at the beginning of the second half, we see that the root cause is that Dortmund’s defence forgot about Müller. Ball handler Kimmich is well pressured, but right-back Ashraf Hakimi just lost sight of Müller. 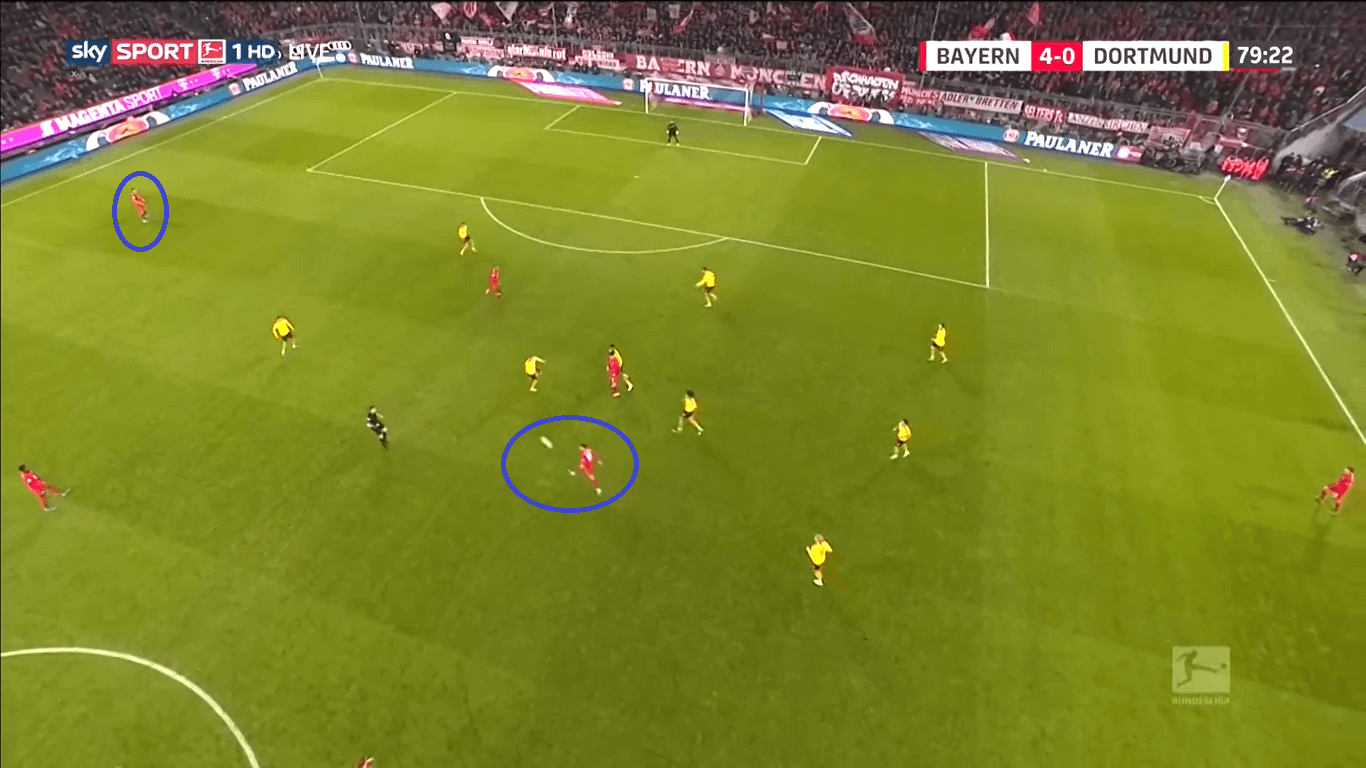 The fourth goal is pre-assisted magnificently by Philippe Coutinho, who plays a no-look pass to Ivan Perišić. Dortmund again forget about defending the right defensive wing and again concede a goal.

Hans Dieter Flick can surely celebrate a great victory, hammering Dortmund away in such a manner. Nonetheless, one should not take the wrong conclusions from this game, as our analysis showed. Bayern still have some issues to face that need to be sorted out in the future, whether by Flick or some other coach. Dortmund, on the other hand, should be worried after this match as they really played a bad game. It is not entirely clear whether they want to stick to Favre or not, but this game was certainly not a positive reference for the experienced coach. If Dortmund still want to fight for the Bundesliga title, they surely need to improve quickly.