Fresh off the sacking of manager Niko Kovač, Bayern Munich sought to make it four wins from four in their UEFA Champions League group. Olympiakos meanwhile were merely hoping to restore some pride after languishing at the bottom of the group after earning a measly point from their first three games.

Hans Flick, now caretaker in charge of the German champions, found himself attempting to lead his team to be the first to qualify from the Champions League group stage this year. The 2-0 win on the night for the German team proved to be just the ticket yet there was still plenty of lingering effects from the hangover of Kovač’s tenure and they were obvious in this game.

This tactical analysis will detail how Bayern were ultimately able to overcome their recent struggles and topple a competitive Olympiakos side. Our analysis will also illustrate the tactics used by Flick in his attempts to restore some of the goodwill that had been lost under the last few months of Kovac’s reign.

In response to Kovač’s sacking after the disastrous 5-1 loss to Frankfurt in the Bundesliga, the likes of Kingsley Coman, Leon Goretzka and Javi Martinez returned to the side in the places of Philipe Coutinho, Thiago, and Jerome Boateng. Alphonso Davies continued on at left-back and David Alaba at centre-back in light of Bayern’s injury issues along the backline. On paper, not too much had changed, however, and the side lined up in a familiar 4-2-3-1 shape.

Olympiakos in return sported a 4-3-3 formation which had no place for former French international, Mathieu Valbuena in the starting eleven. Other notable changes for the Greek side saw Tunisian defender, Yassine Meriah displace the experienced Avraam Papadopoulos at centre-back and Youssef El-Arabi removed for Miguel Angel Guerrero upfront as Pedro Martins made a conscious effort to produce a younger lineup in this game. 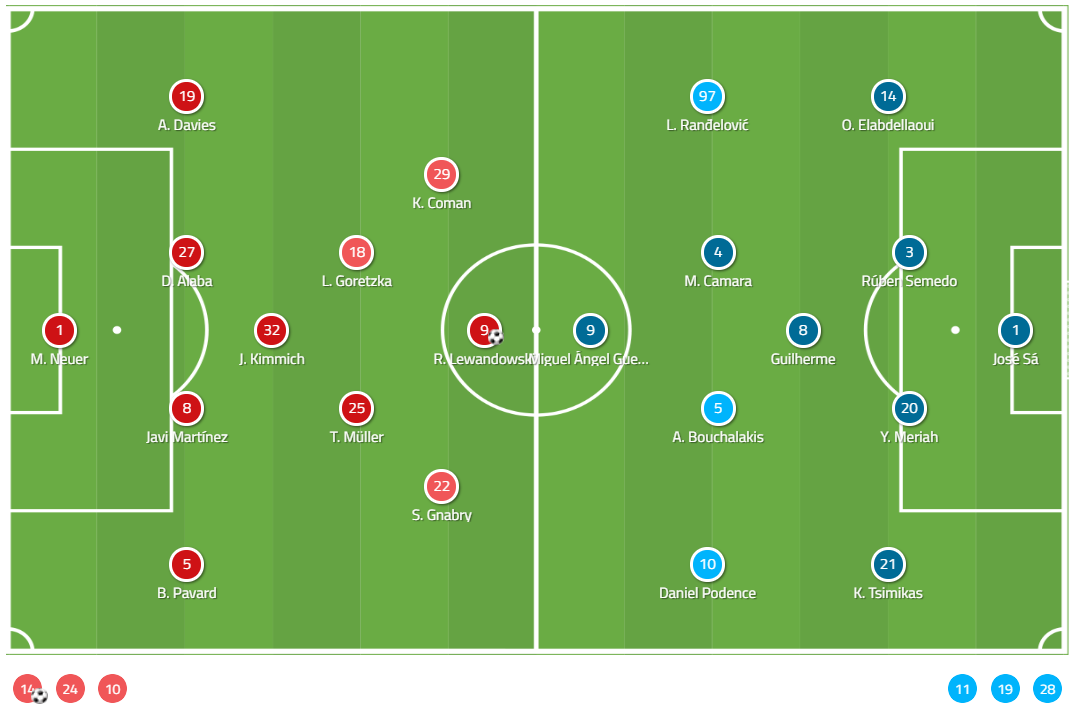 Olympiakos approached this game with an orthodox 4-3-3 formation that easily transitioned into a defensive 4-5-1 shape when out of possession. When Bayern had the ball, the wingers for Olympiakos would drop back to form a flat midfield five in order to protect the space in between their lines. This helped Olympiakos really condense the space available to Bayern’s attackers in between the lines of their midfield and defence. Olympiakos did a great job of maintaining a horizontally and vertically compact shape that compelled Bayern into making non-threatening passes.

To keep their shape compact, Olympiakos rarely pressed from the front, preferring instead to retreat to the halfway line, minimising the distance between their front line and defence. This limited the space responsible for the midfield to marshal and also the space in which Bayern’s attackers could receive and turn on the ball from within their defensive shape.

This forced Bayern to play most of their football in front of the Olympiakos defence and to pass along their backline and deep midfield in the dreaded “U” shape. Because of this, Bayern’s offence was largely nullified throughout the majority of the game.

Under Flick, Bayern’s starting eleven appeared to sacrifice a lot of its creativity in favour of raw German power. Coutinho was dropped to the bench and in his central attacking midfield spot, Thomas Müller took the Brazilian’s place. Alongside Coutinho, another former Barca man in Thiago was dropped in favour of Goretzka, slightly deeper in midfield. The reasoning for this became obviously clear early on as Goretzka pushed forward to link up with Robert Lewandowski and Müller.

This helped ever so slightly to solve some of Bayern’s latest issues where they previously had failed to occupy these spaces higher up the pitch. This did help to create the space inside Olympiakos’ half where Kimmich had the space to dictate the flow of the game. Also, this helped to create the opportunities for Coman and Serge Gnabry to impact the game where they could run at their full-backs in one-on-one situations.

Playing with five men in between the opponent’s midfield and defence did also compel the opposition defence to remain honest and not gamble on intercepting the balls played into Bayern’s wide men. This guaranteed that Kimmich always had his out-balls open and in space on the wings. What this didn’t guarantee however was consistent and dangerous penetration for the Germans when attacking the centre of the pitch or the opponent’s penalty area.

With so little movement and some unimaginative play, Bayern created very little penetration through the centre of the pitch. This handed all the responsibility for Bayern’s penetration to their wide men and their ability to beat their men and hopefully produce an accurate cross at the end of the run.

This is a highly unsustainable and unreliable source of goals and it wasn’t until late on in the game did Coman and Lewandowski finally combine to find a goal for the home side.

In this situation, there’s not even too much potential for danger vs Olympiakos. Coman is faced up by two defenders and has fewer players to aim for in the box, with Lewandowski tightly marked. It was only through sheer quality and a bit of luck that Bayern found the back of the net from this situation and Olympiakos have every right to feel hard done by here.

One disconcerting aspect of Bayern’s play was the lack of impact their full-backs had on the game. From Bayern’s setup, it was clear that Gnabry and Coman were there to dominate the wings so how did Bayern use their full-backs? In a short answer, they didn’t.

Modern utilisation of the full-back position is to push them into the centre of the pitch to help overload the middle as well as to use them as a pivot in midfield when they’re not being used to stretch the pitch. In this game, however, Davies and Pavard didn’t have any clear role in the offence. Gnabry and Coman dominated the wide areas high up the pitch and Kimmich alone dictated the flow of the game in the middle. 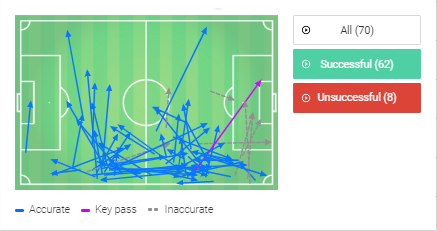 This effectively rendered Bayern to playing with only nine men. Neither Davies or Pavard seemed to have any presence when their side had the ball and all they succeeded in doing was to help Bayern keep the ball in front of the Olympiakos shape. It was another sort of the type of languished performance from the players that ultimately cost their former manager his job.

I think it’s safe to say that this wasn’t the sort of reaction the board of directors at Bayern were after. Despite the pace and power in this team, it’s clear that not all is right within the Bayern team however, they can thank their graces that they’re one of the only teams in the world to have the talent to ride through such issues without their results suffering.

Olympiakos had a gameplan to stifle their German opposition but not much of a plan beyond that. The flow of the game and due to the cyclical nature of Bayern’s stale attack and dominant possession, Olympiakos had little opportunity to get anything out of the game after Bayern’s first goal.

Bayern are in desperate need of some inspiration, however, and in all honesty, they don’t have a lot of time.