It was one of those nights on which true champions show up and deliver. Cristiano Ronaldo did just that. With three goals against Atlético Madrid, the Portuguese superstar secured the win and made it possible for Juventus to still fight for the Champions League title.

Atlético’s performance, on the other hand, was a disappointment. Diego Simeone and his team were the heavy favourites after their 2-0 win in the first leg. But after a poor performance, especially the way they defended crosses, was unlike Atlético. But how could Juventus break through what is normally the best defensive block in the world?

Juventus started in a 4-3-3 formation which occasionally looked like a 4-4-2 when ex-Manchester United forward Ronaldo behaved more like a striker and Federico Bernardeschi filled the right wing slot. Besides those two, Mario Mandzukic started up front. The three were supported by Blaise Matuidi, Emre Can and Miralem Pjanic.

Their full-backs Leonardo Spinazzola and Joao Cancelo had a crucial role about which we are going to talk in that article specifically. With Leonardo Bonucci and Giorgio Chiellini Juve lined up with their classic centre-back duo, which not only provides defensive stability but also creativity during the build-up. 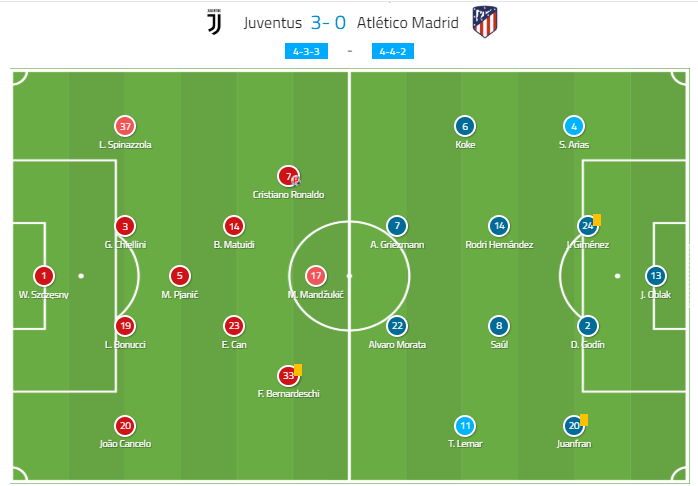 Interestingly, Juventus’ system didn’t look like a classic 4-3-3. Due to the higher role of the full-backs, Ronaldo could move more into the box and support Mandzukic while Bernardeschi had a deeper role in the right half-space. The reason for the asymmetry was the role of Emre Can. The former Liverpool player dropped deeper and created a back three with Bonucci and Chiellini during the build-up process.

The idea was to find ways around the compact two-man line of Atlético and further create diagonal passing angles. Based on their numerical superiority, Juventus could easily move the ball around the defensive block of Atlético which struggled to apply pressure over the course of the whole game. 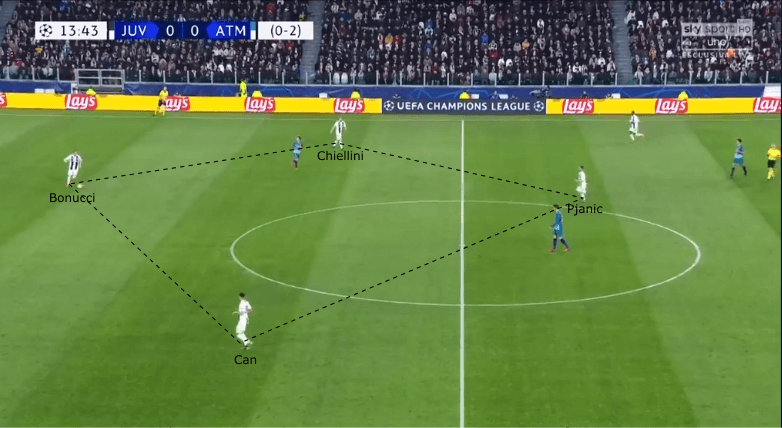 Along with the high full-backs, Juventus created a 3-2-5 in possession. Pjanic was positioned more in the centre while Matuidi supported in the left half-space. Consequently, Bernardeschi would occupy the right half-space more often.

Interestingly, Atlético struggled to defend against the overload in the last line of Juventus. The Italian side tried to take advantage of that by crossing the ball more often, usually not the best idea against Atlético, but Juventus were great at creating numerical superiority.

The problem of Atlético against the overload

Atlético usually defend with a wide defensive line while the midfield try to make the centre as compact as possible. However, against the five Juventus players up front, Atlético struggled to close the space on the wing.

Juventus moved the ball smoothly as they were capable of opening up space on the other side of the pitch. Due to their well-structured possession game, the Italian champions were capable of switching sides quickly to exploit openings on the far side. 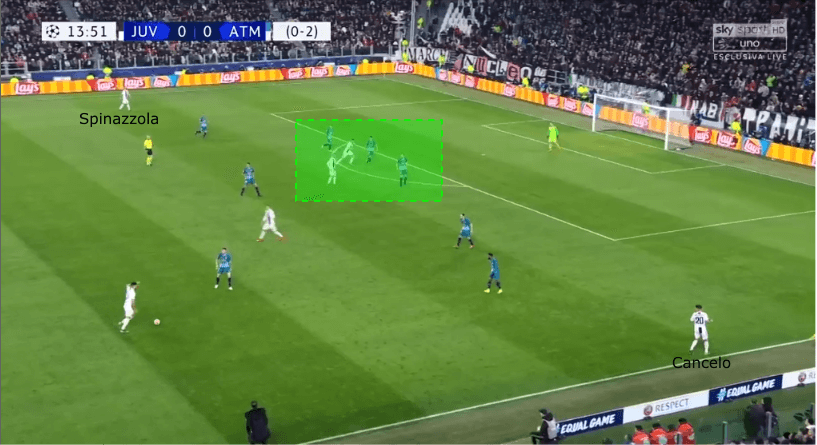 With a ton of crosses, Juventus tried to overcome the Atlético defence. With Mandzukic and Ronaldo, Allegri has two strikers whose biggest strength is their heading. Furthermore, the other players of Juventus managed to move into the box intelligently, creating overloads and causing mismatches.

Taking a look at the first goal we can easily identify the problems of Atlético. Cristiano Ronaldo moved from the half-space into the box which led to Juanfran being the one who had to defend the Portuguese superstar.

Furthermore, Simeone’s side couldn’t close the space on the wing. They dropped too deep and defended too compact in the centre, which gave Juventus the necessary space to cross without getting pressured.

Ronaldo had the positional advantage against Juanfran because the Portuguese striker was positioned behind the full-back. Juanfran couldn’t observe the ball and the striker simultaneously, which forced him into a situation in which he could only react.

Ronaldo, on the other hand, waited in the open space, leaving a few inches between him and Juanfran. As a consequence he could gamble on a long ball into the open space, or he could attack with speed once the ball was crossed close to the far post, which is what happened. 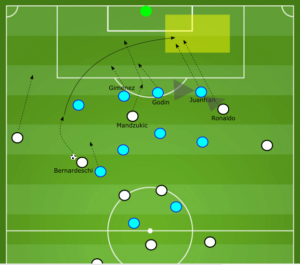 You can’t blame Juanfran in that situation because he was the only one who could pick up Ronaldo. The centre-back close to Juanfran was occupied by Mandzukic. The fact that Atlético dropped too deep and couldn’t apply pressure was the reason Ronaldo simply overpowered the Spanish left-back.

Also, when we take a close look at the second goal we can observe similar problems. Again, Atlético dropped too close to their own goal, giving Juventus a good position to score. Furthermore, Simeone’s team couldn’t apply pressure on the ball carrier. In the centre, Juventus created a 4v3 overload and the pure athleticism of Ronaldo was enough for them to score again.

Atlético: the attack that didn’t exist

It is relatively rare that Simeone’s side has any problems defensively. However, when they have, their lack of attacking power and structure in possession can kill them. Although Atlético have improved in that aspect, they are still far away from being an elite team in possession.

Juventus pressed well. They were able to recuperate many balls immediately after they lost them, and therefore dominated the game. With Can in the deeper role and Pjanic in front of the back-three, Juventus always had a 4v2 against Alvaro Morata and Antoine Griezmann which stopped them from being effective.

The only chance Morata had was more a product of coincidence than a planned attack. After conceding two goals Atlético looked even more helpless and lost the ball even more quickly. In the end, the missing attacking productivity was the decisive factor and made it possible for Juventus to dominate the whole game.

By bringing on Paulo Dybala and Moise Kean, Allegri went all in because he felt that Atlético were struggling and had lost their defensive organisation. The last 15 minutes were quite chaotic because Atlético tried to be more attacking.

However, their poor positioning and structure in possession avoided quick counter-pressing. Juventus received more space, were able to start their counter-attacks quickly and in the end, received a penalty out of one of those counter-attacking situations.

All in all, Juventus were the better team in the second leg and therefore deserved to advance to the next round by using Ronaldo in a hybrid role. Occasionally, he was positioned on the wing or in the half-space, but more often he moved into the centre where Juventus managed to create a lot of dangerous situations.

Against the intelligent overloads in the box, Simeone’s side didn’t find a solution. In the end, Atlético lost because of their poor attacking performance. It is just not enough to defend for 90 minutes without creating any chances in an away game in the Champions League.