An inspired Chelsea secured their Europa League quarter-final spot by demolishing Dynamo Kyiv in their own stadium. After winning 3-0 at Stamford Bridge, the Blues didn’t give any chance to the Ukrainians, knocking them out with 8-0 on aggregate. The win was a result of the great connection between the players on the flanks but also of the lack of creativity and structure in Dynamo’s starting XI.

Chelsea’s secret weapons Olivier Giroud, Ruben Loftus-Cheek and Callum Hudson-Odoi put in outstanding performances and proved that Maurizio Sarri can rely on them in the tournament, without missing the presence of players like Eden Hazard and Gonzalo Higuain.

Giroud has been the main reason for the team reaching out the quarter-finals, scoring nine goals in nine games, including a hat-trick in Kyiv. His positional flair in the box has been of great help especially when attacking using the wings and during set-pieces.

The Londoners hardly had any problems defending against the home team, although they had to put in more effort during the second half. The absence of Benjamin Verbic due to illness had a huge impact on Dynamo’s performance as they struggled in the attacking phases.

But what was the reason behind Chelsea’s win, and why did Dynamo struggle so badly defending against them?

Dynamo started in a 4-2-3-1 formation transforming into 4-4-1-1 out of possession against Chelsea’s 4-3-3. Sarri meanwhile made seven changes after the Wolves game at the weekend but still had a team strong enough to not allow any surprises.

The Blues’ plan of applying a high press using Giroud and Loftus-Cheek was clear from the early stages of the game. With them both marking the central defenders Dynamo struggled building up from the back. They were forced to make short pass combinations with the goalkeeper and the lack of creativity didn’t help them when trying to proceed the ball further.

Because of that high press Kyiv’s midfield line was stretched out wide trying to escape their markers and open the passing lanes, but a brilliant defensive performance by N’Golo Kante didn’t allow them to use these newly opened spaces.

On the other hand, the lack of any press and organisation during defensive transitions was the reason for Chelsea building up from the back pretty frequently with a huge success rate. Dynamo’s players were stuck in the midfield area and didn’t put any pressure on the centre-backs Antonio Rudiger and Andreas Christensen, which allowed them to keep possession for longer periods of time and use series of one-touch passes to form attacks.

Because of the overloaded Kyiv midfield, Chelsea rarely used the central areas as a way to build up. The only reason for the higher amount of passes between Rudiger and Kovacic was them trying to slow down and play combinations of short passes in order to keep the ball.

The centre-backs would often position on both sides of the box which made it hard for their markers to follow the ball and cover them. Meanwhile, it made it easier for the Londoners to use the full-backs Marcos Alonso and Davide Zappacosta. They would position midway up the pitch and pick up the ball to form attacks on the flanks.

They needed no effort to build up smoothly from the back. On the rare occasions that Dynamo applied enough pressure on their opponents, Willian would drop back and cut inside as defensive support, and also open spaces for Loftus-Cheek and Alonso on the left flank.

Giroud would also drop back in the central areas and use his strong off-the-ball movement to drag the defenders out of their zones and open spaces for Callum Hudson-Odoi and even Loftus-Cheek on the edge of the box.

However, Kante was marking his opponents tightly and they failed to use their strategy to use the wings to attack. This, though, made the connection between Kante and Hudson-Odoi less efficient, as the Frenchman was more focused on his defensive responsibilities. Later on, this problem was solved by simply Kante and Loftus-Cheek positioning more centrally and freeing more space for Alonso and Zappacosta to communicate with Willian and Hudson-Odoi.

Chelsea’s efforts on the wings and their set-piece performance caught Dynamo off guard. Because of the lack of a strong connection between Kante and Odoi, the Blues would mainly use the left flank more actively when forming an attack.

Alonso would not only stay out wide but also would sometimes cut inside to give Loftus-Cheek a chance to position on the edge of the box. The Spaniard would pick up the ball and deliver it to the wing then make a cross to either Loftus-Cheek or Giroud to use their positional sense and shoot.

Dynamo struggled when defending set-pieces. Not only did Wilian and Giroud make great combinations and create opportunities, but also Rudiger would join them in the box.

This almost caused some defensive issues during defensive transitions. In these situations, Kante would cover deep and position as the fourth man in the back-line while Rudiger was tracking back to his responsibilities as seen in the image below. 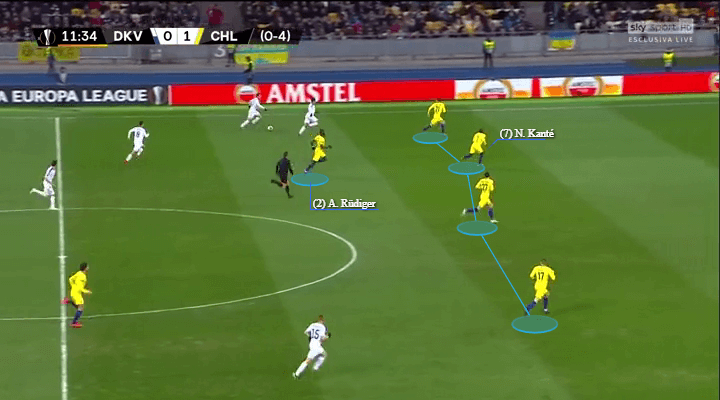 Dynamo’s highly positioned defensive line would sometimes be unable to reach Kante at speed. In the case below, he managed to send a perfectly measured through-ball to Giroud. 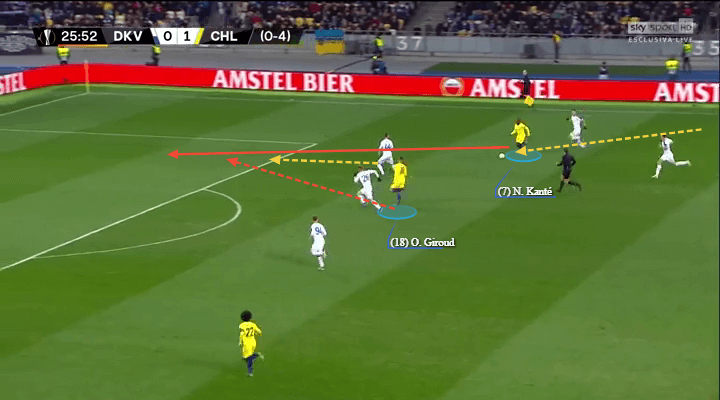 Most of the time Dynamo sent long balls into Chelsea’s box without any direction. Out of desperation, they would use the goalkeeper Boyko as the player to distribute the ball to Chelsea’s half using long balls.

There were a few sparks of creativity from Kyiv’s players as they managed to find a way to catch Zappacosta off guard. His lack of strong ball control could’ve cost the Blues. It was also to do with the fact that Chelsea’s press intensity dropped which allowed the hosts some chances in the second half.

Chelsea continued strongly in the Europa League and despite the downgrade in their performance in the Premier League, they can be considered as one of the favourites in this competition. Meeting Slavia Prague in the quarter-finals might not be too challenging for the team, bearing in mind that Sarri kept his Premier League starting XI players on the bench against Dynamo. If they continue with their attack-oriented style of play it won’t be of any surprise to see them as semi-finalists.