How did West Brom limit space for Swansea’ attacking threat?

Swansea City, meanwhile, have now lost six of their last eight games, five of them away from home. Like they did at the Liberty Stadium on November 28th, West Brom were able to take full advantage of their set plays, scoring their first direct from a wide free-kick and two from corners.

As well as their vulnerability at the back, Swansea City were also guilty of lacking a clinical finisher in front of goal. They wasted four big chances, one of which was a penalty kick that former Manchester City midfielder Bersant Celina will quickly want to forget about.

In this EFL Championship tactical analysis, we’ll look in detail at the key tactical battles during the match, how both sides approached the game and where it was essentially won and lost.

James Shan made four changes to the side that drew 1-1 at home to Ipswich Town, bringing Mason Holgate, Ahmed Hegazi, Chris Brunt and Rekeem Harper into the starting XI.

Oli McBurnie’s continued absence due to fever meant that Swansea City boss Graham Potter kept the same side that lost 1-0 at Norwich City last Friday, with Dan James playing through the middle in a false nine role to begin with.

West Brom adopted a rather defensive approach, sitting back in two solid lines of four, and sometimes five, as they focused on limiting the space for Swansea’s attacking quartet of Routledge, Dyer, Celina and James. Winning turnovers, they looked to make the most of regaining possession in their own half and exposing Swansea’s attacking commitment of their full-backs.

It proved to be effective as their opening goal came from a free-kick won after a turnover and quick release of a player in behind Swnasea’s left-back. 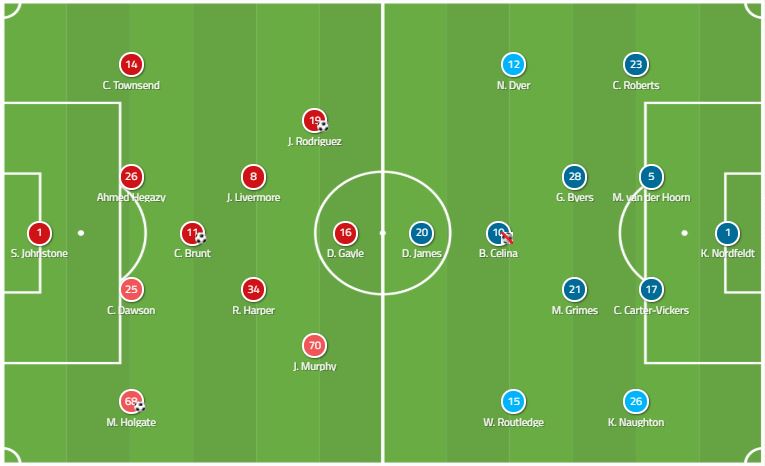 The game also saw a contrast of passing styles between the two teams. Swansea City were patient with their build-up play from deep while West Brom were happy to aim long passes from inside their own half as the following images show.

You can also see the differences between both side’s passing game in their pass maps below. The size of each player circle represents the total number of attempted passes with the colour representing the pass success rate (on a red-amber-green scale). Each player also has three passing lines demonstrating the areas where they played most passes to.

Swansea’s pass map below shows a different style of passing play. They made a far greater number of passes, with Matt Grimes in particular attempting more than 130 during the game. Dan James also features on the left in the pass map below and we’ll focus on this in greater detail later in this tactical analysis.

West Brom’s game plan out of possession was similar in some ways to Norwich’s during the second half of their 1-0 victory over Swansea City at Carrow Road. Having failed to cause problems with a high press in the first half, Norwich dropped back and focused on outnumbering Swansea and limiting the passing options during the second phase of their build-up play.

West Brom did the same. After Dan James caused problems with his runs in behind at Norwich, the Baggies made sure that they didn’t let that happen on Wednesday evening by double-marking in the half spaces and blocking vertical passing lanes.

Swansea’s struggles to get James involved early on

For the opening 20 minutes, Swansea City could barely get Dan James on the ball. That was mainly due to West Brom blocking the vertical passing lanes as the likes of Nathan Dyer looked to play him through and in behind the home side’s defence. 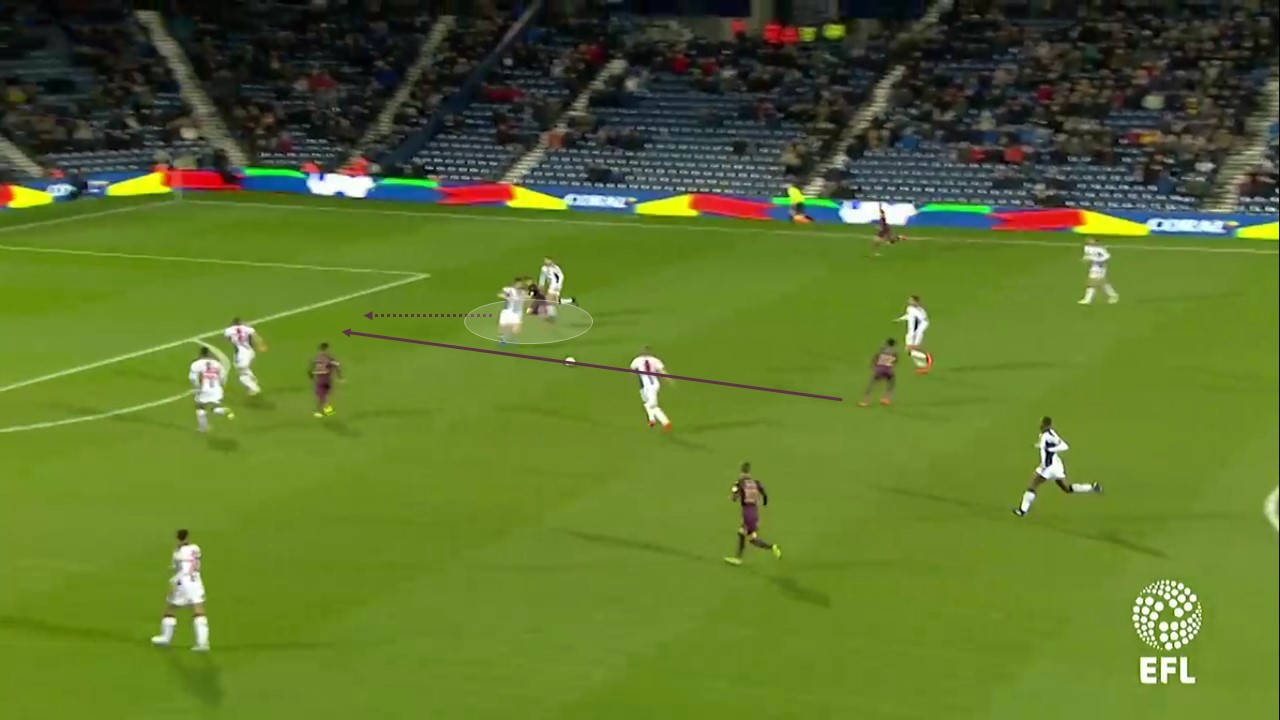 As you can see in the above and below images, West Brom block out the forward passing lanes. Above, Dyer’s pass is intercepted and below, a pass simply isn’t available, forcing Dyer to recycle possession backwards. 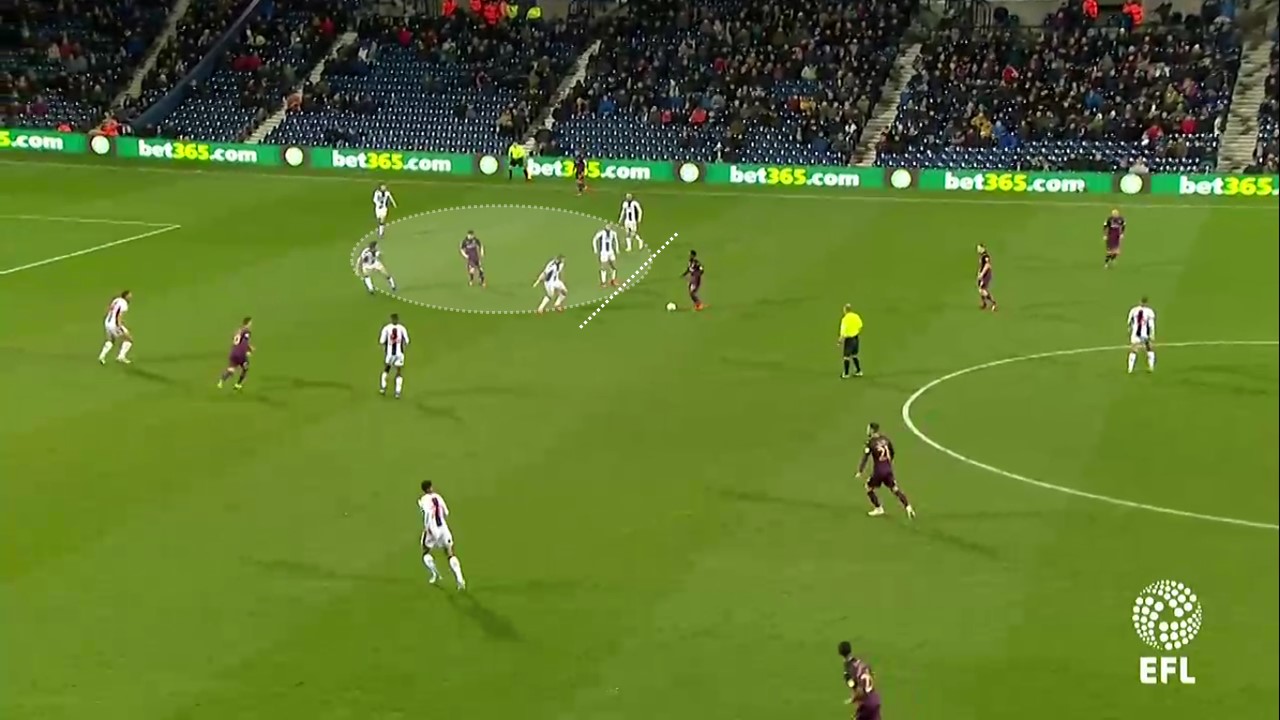 The map below shows Dan James’ ball touches in the first 19 minutes of the match, all in wide right areas.

Dan James is one of Swansea’s biggest attacking threats, especially without Oli McBurnie available so getting him more involved was crucial. Against West Brom’s disciplined two lines of four and passing lanes blocked, James couldn’t get any service through the centre so Swansea City manager Graham Potter made a switch that helped his side.

He swapped James and Routledge’s positions, instructing James to hug the left touchline, Routledge to now play as a false nine through the middle and Celina to also shift across to the left to feed James down that side.

With James offering width down that side, this saw left-back Kyle Naughton often moving inside to offer support through the inside channels.

The impact of the change was pretty instant as Swansea City were now starting to create some decent chances in front of goal, but their finishing was very poor from high-scoring positions.

Dan James was much busier after moving to the left, as you can see below in the image below that shows the touches he made in minutes 20-45 in the first half.

West Brom were well disciplined and organised throughout the game, defending in variations of 4-4-2 and later 4-5-1 during the second half. As we saw earlier, their main focus was blocking the vertical passing lanes as well as closely marking players occupying the inside channels.

West Brom’s Dwight Gayle was always left upfield as their attacking outlet with Rekeem Harper moving back and forth. Sometimes the latter would join Gayle as a front two to press high before dropping back closer to the midfield line when Swansea progressed the ball into the opposition’s half. 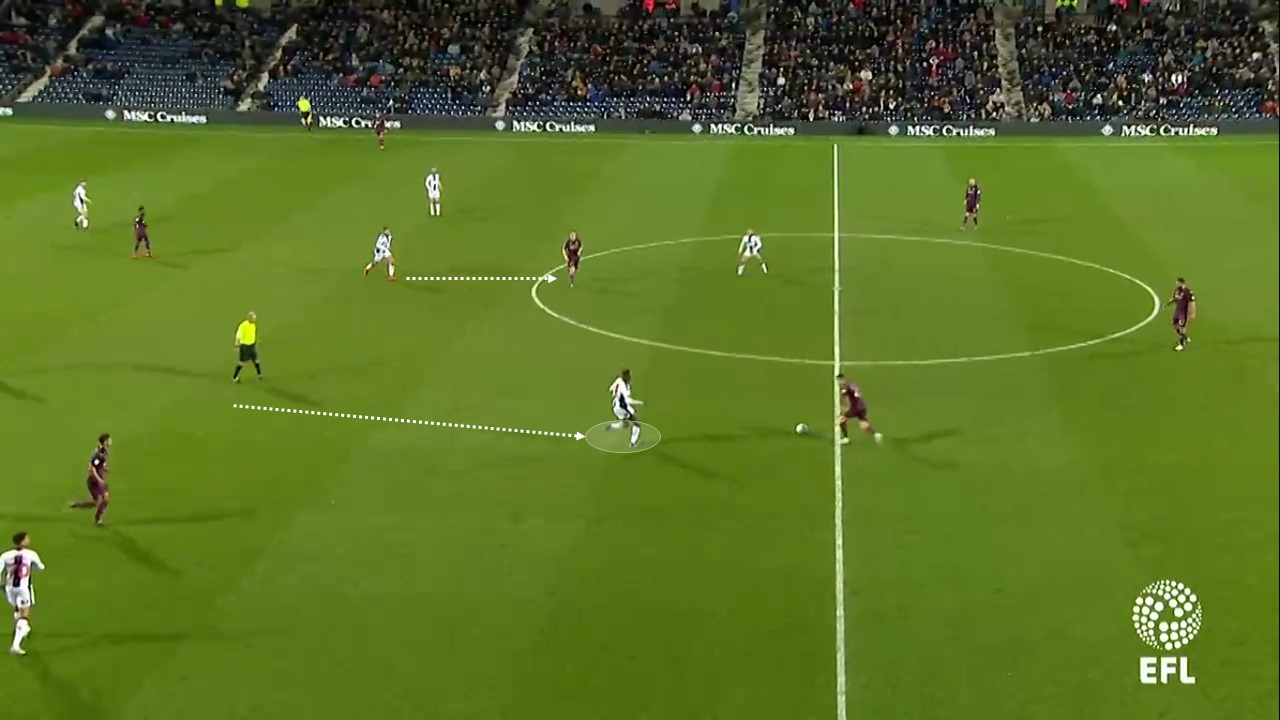 West Brom’s use of possession turnovers

West Brom marked Swansea City’s attacking quartet tightly on the edge of their defensive third, as you can see below. They looked to win possession in these areas and quickly make use of the space left behind by Swansea’s attacking full-backs.

The blue dots on the pitch map show the losses of possession by Nathan Dyer, Wayne Routledge and Bersant Celina during the game. You can see the bulk of them occurred 25-30 yards from goal and close to the edge of West Brom’s defensive third.

The image below shows a loss of possession in a wide left position. With a number of Swansea City players occupying the left side of the pitch, West Brom have an opportunity to quickly switch the play into the space that opens up down their left. 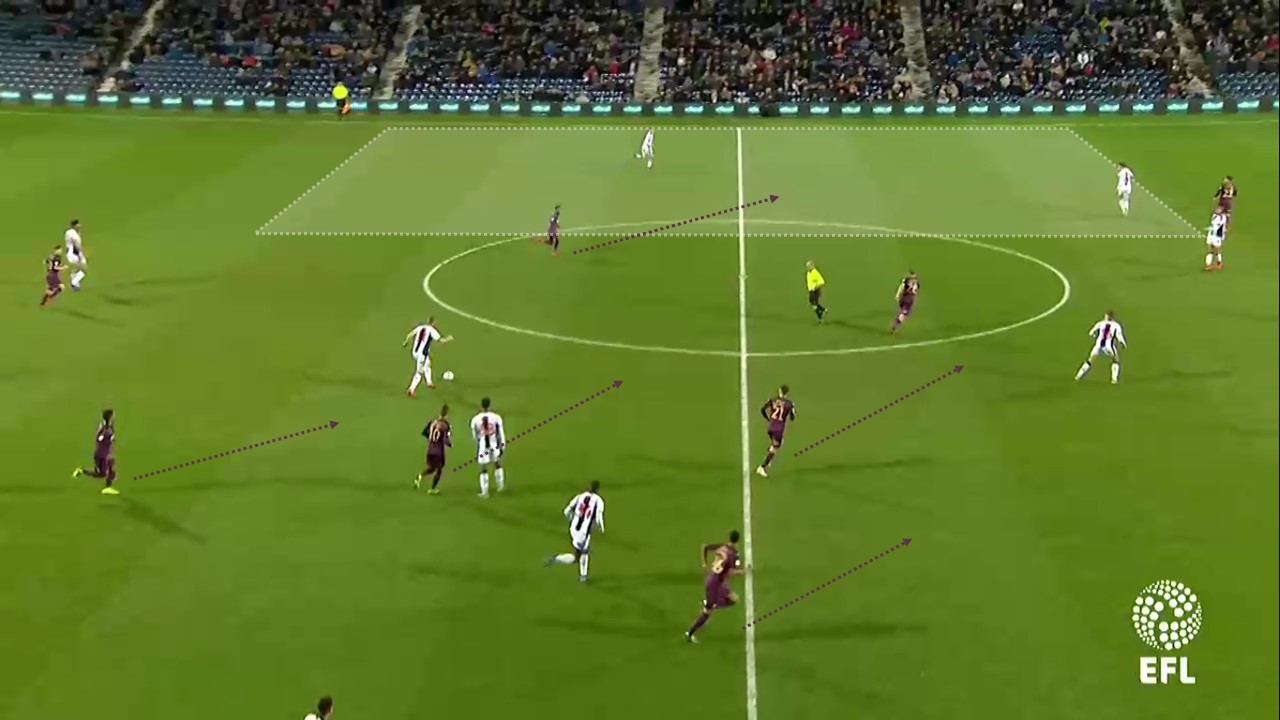 It’s a similar situation below too after another loss of possession. This time it is in the right half-space, and with a number of players positioned narrowly on that far side West Brom can make one or two vertical passes to find them attacking in space and in behind Swansea’s midfield. 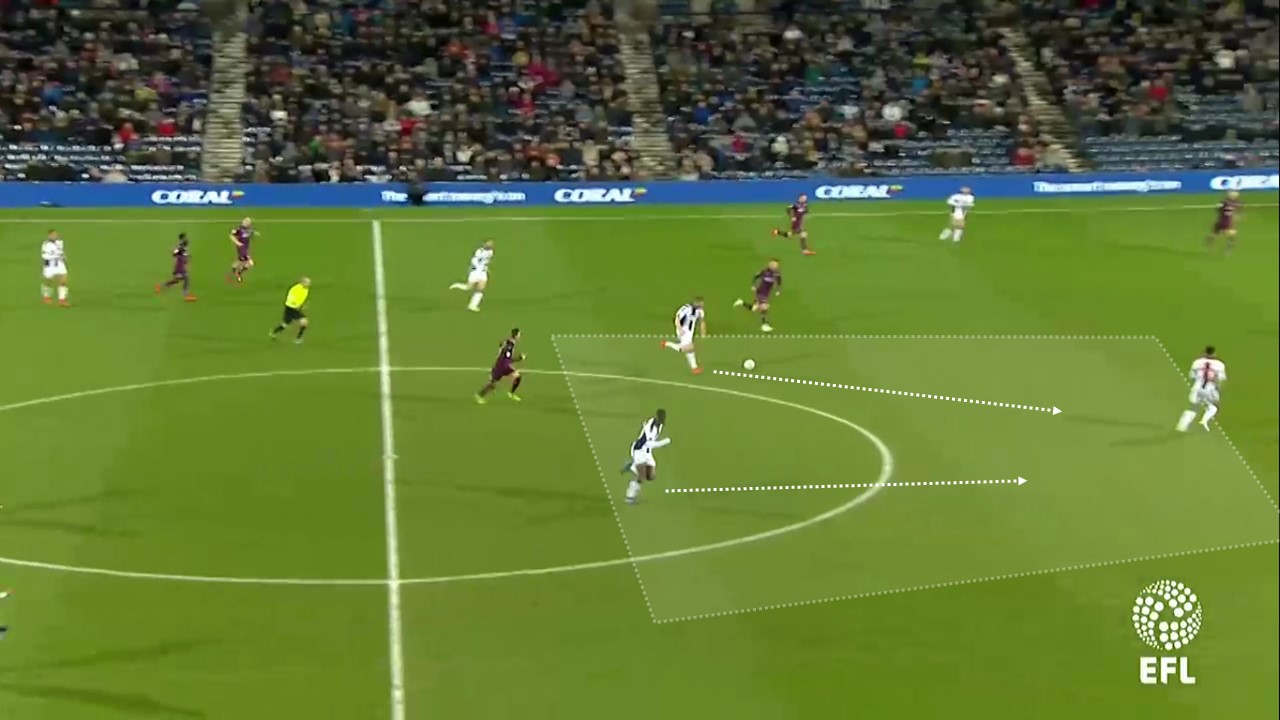 The below screenshot highlights a common area of where West Brom were able to regain possession. Murphy is able to run through the channel, and the second image shows how he can benefit from the space in behind Swansea’s left-back Kyle Naughton.

The last example to demonstrate West Brom’s use of turnovers for attacking opportunities is shown below. It shows Swansea still in possession, but with West Brom pressing tight in a wide area Swansea are vulnerable to another turnover and counter-attack.

The shaded area shows how West Brom could typically benefit from winning turnovers and quickly making passes into these areas to counter-attack, as Swansea lack midfield cover with George Byers moving forward. 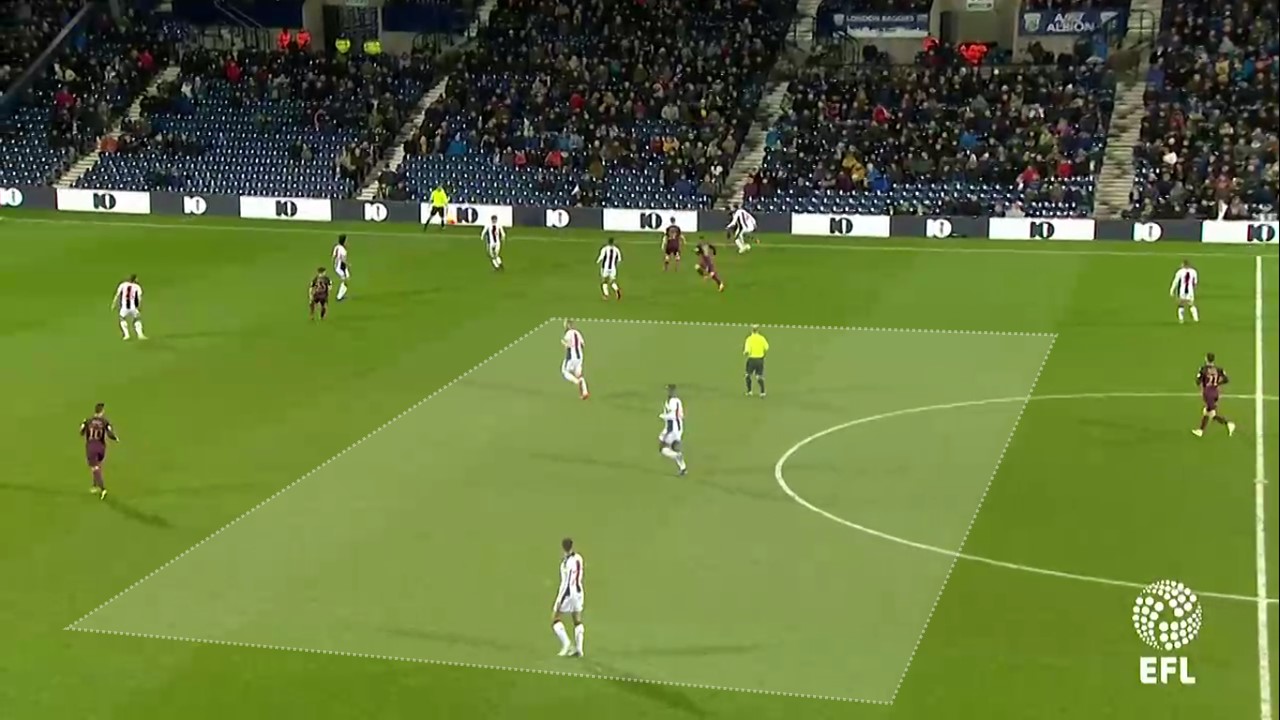 Chris Brunt opened the scoring for the home side after 19 minutes. As we saw in the screenshots above, Murphy is released down the right inside channel following a turnover, Kyle Naughton has to backtrack and concedes the free-kick. 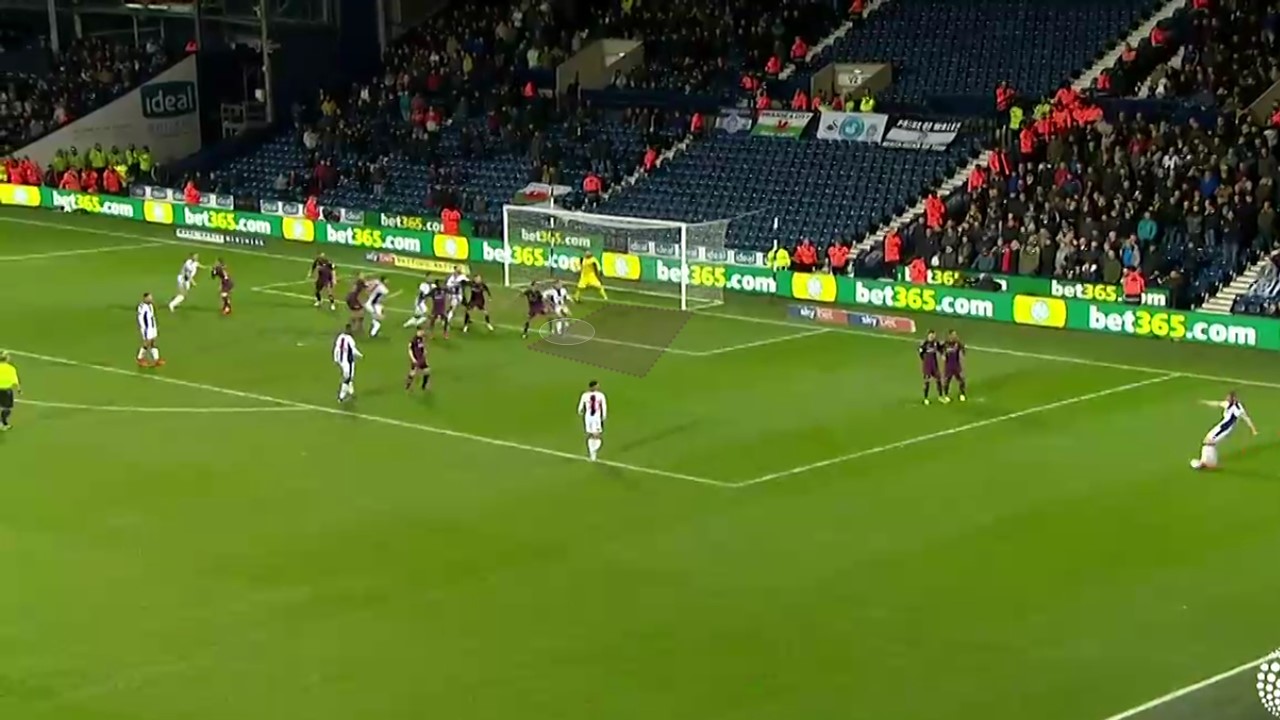 Chris Brunt’s inswinging free-kick from the left is aimed low across the six-yard area and goes all the way into the far corner of the net. Swansea have adopted zonal marking at set pieces all season but nobody occupies the near post zone here.

Secondly, Kyle Naughton allows Dwight Gayle to get in front and goal-side of him (below). Therefore he is able to easily get into an advantageous position to get a touch to direct the ball goalwards.

He doesn’t make one though, but doesn’t need to either. His movement attracts the goalkeeper to step towards his near post, making it a difficult task in keeping out Brunt’s effort. 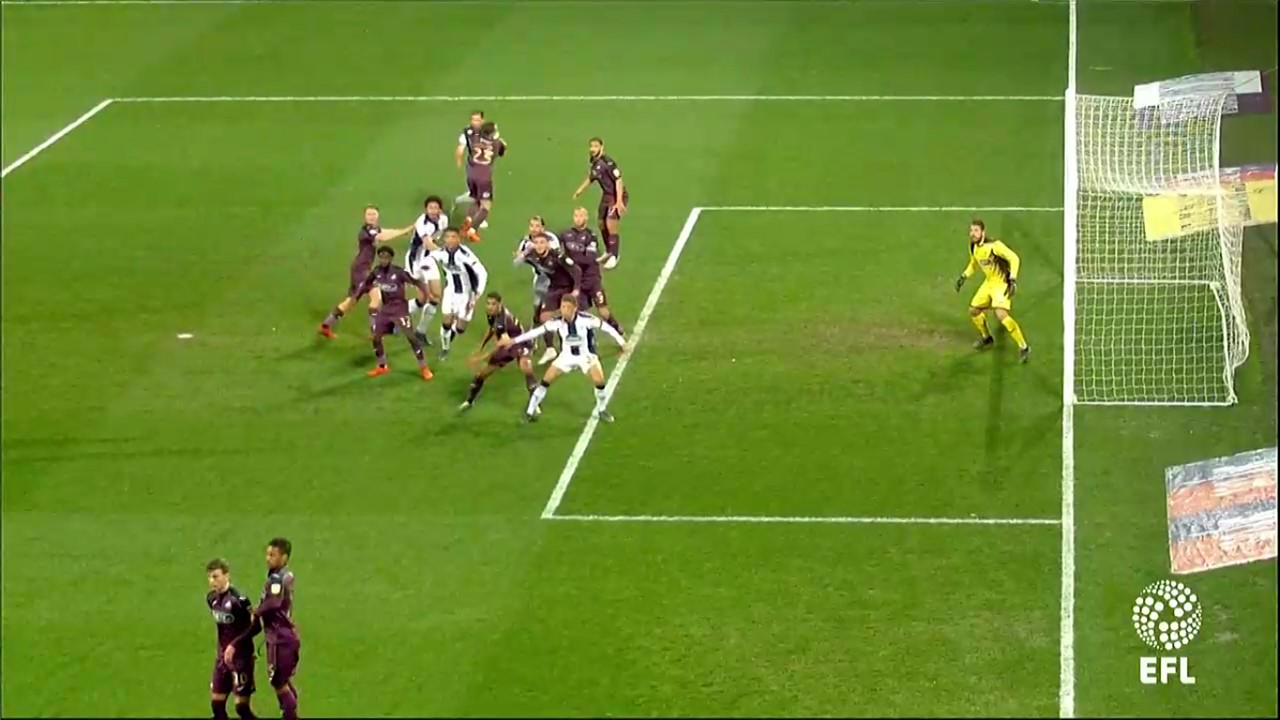 Swansea City allow the same thing to happen again from another free-kick. Another in-swinger from the left is taken by Brunt, but this time the ball is aimed at the far post. The ball goes beyond everyone and out of play but you can see below, there were two or three West Brom players getting goal-side of their markers at the far post. Rodriguez is waiting unmarked inside the six-yard area and hoping to see the ball headed back in his direction. 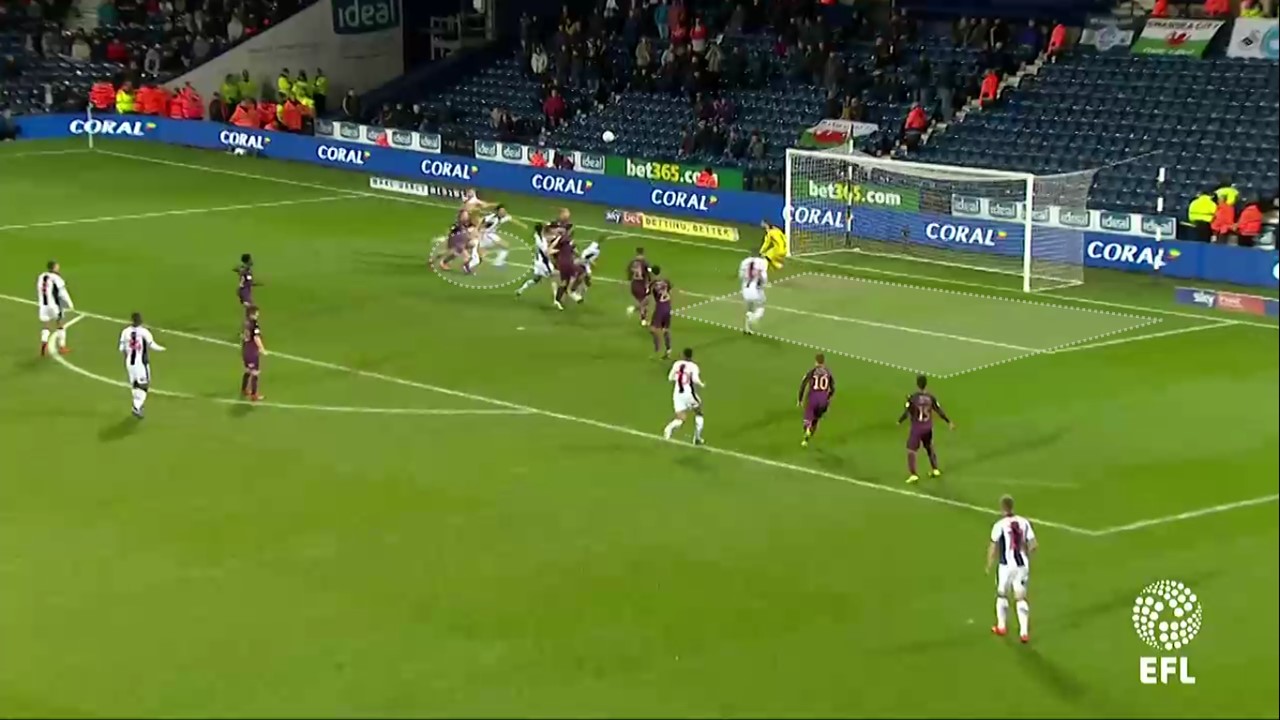 West Brom added a second after 54 minutes from another set piece, this time an in-swinging corner. The below image shows how Holgate was able to head the ball home in front of the goalkeeper Kristoffer Nordfeldt who didn’t get off the ground in an attempt to meet the aerial ball.

Former Ajax defender and Swansea City captain Mike van Der Hoorn is also left to mark two West Brom players, one in front and another behind him. 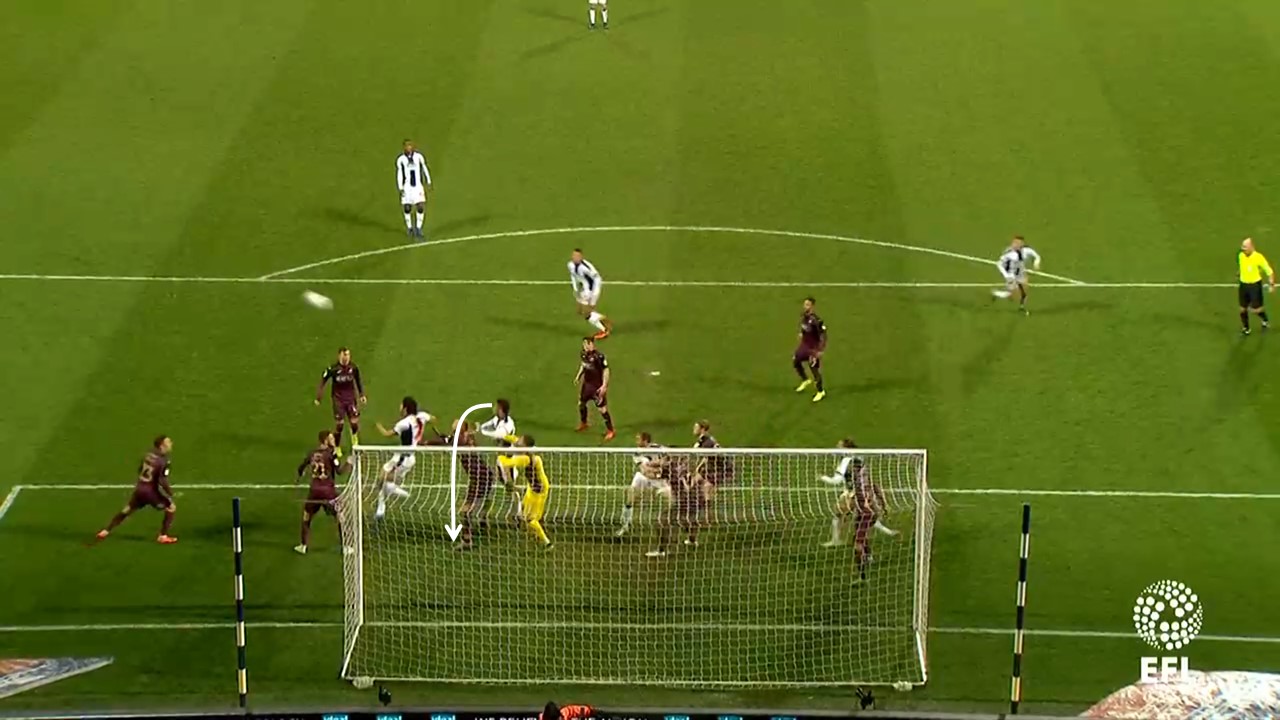 At 2-0, West Brom are happy to sit in a solid 4-5-1 defensive shape and see out the remainder of the game quite comfortably as they continue to limit Swansea’s attacking space effectively.

With five minutes remaining of normal time the three points for West Brom were most definitely wrapped up with a third goal, and it came from another corner. 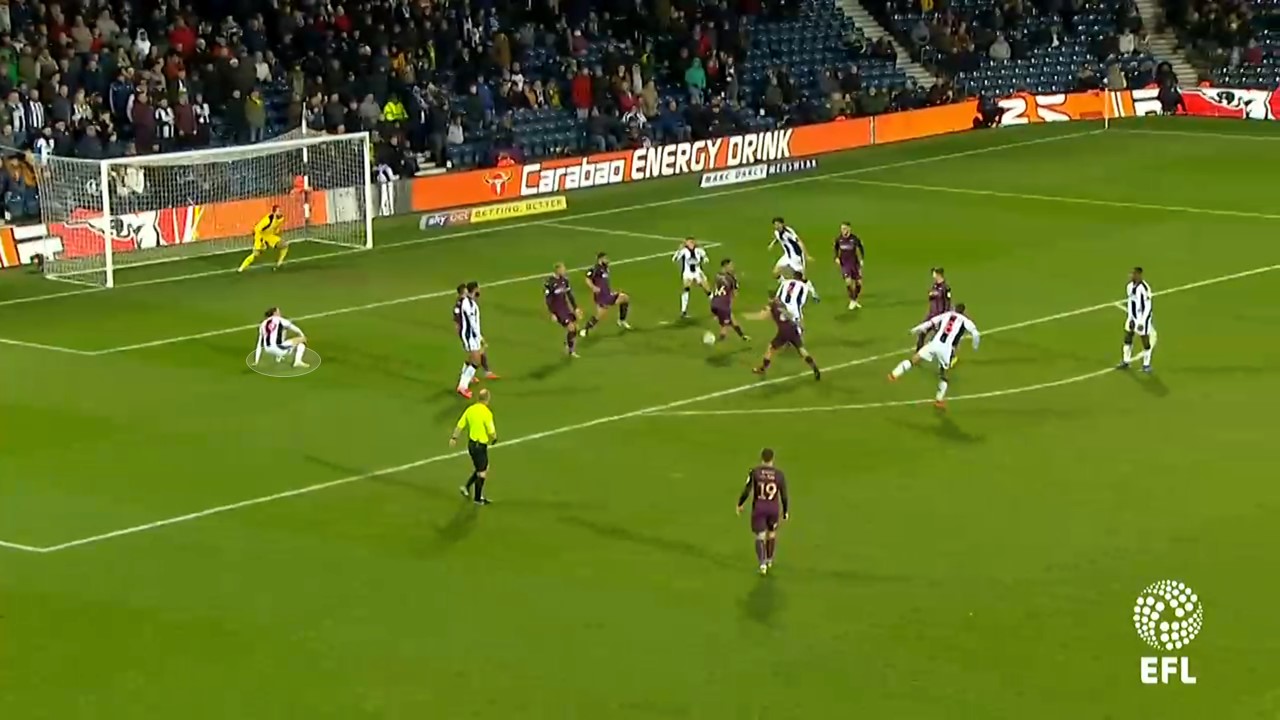 Swansea City fail to clear the lines from a corner as the ball gets played in and around the penalty area. A shot from 20 yards takes a deflection from which Cameron Carter-Vickers tries and fails quite spectacularly to clear acrobatically.

As the Swansea defence has pushed out, Rodriguez (circled, below) can take full advantage of Carter-Vickers’ error and final touch by placing the loose ball into the net from what would have been an offside position. 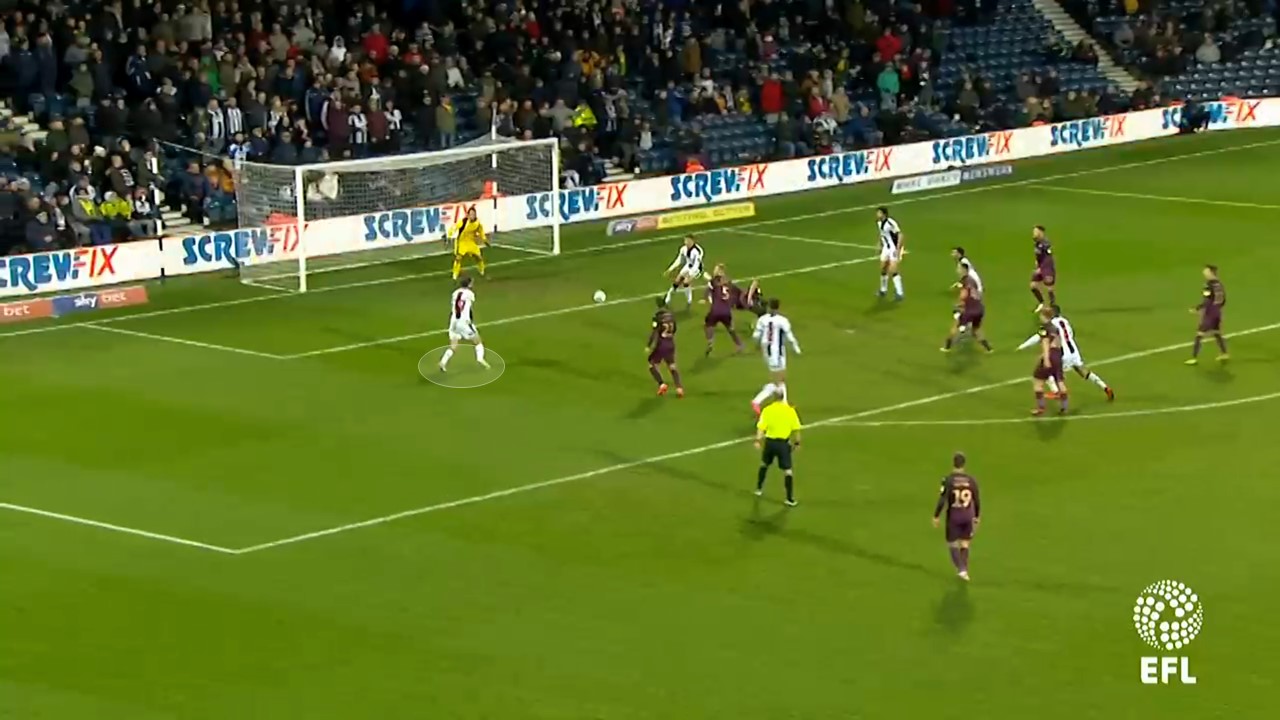 It was a welcome home victory for West Brom, their first of 2019. It was a dogged performance as, once again against Swansea City, they took full advantage of their set piece opportunities.

Swansea City might have had 70% possession, attempted 731 passes and created four big chances during the game, but they counted for nothing. The lack of a clinical finisher and poor defensive errors saw them lose their fifth consecutive away game and their sixth in the last eight.

Bersant Celina’s embarrassing penalty miss five minutes before half-time cost Swansea City a chance to go in at half-time at 1-1 with plenty for them to play for in the second-half, but another error saw them 2-0 down after 54 minutes. Their lack of strength in depth from the substitutes bench made it difficult for them to change their attacking approach for the final 35 minutes as West Brom’s 2-0 lead rarely looked in doubt.