Coming into the quarter-final of the FA Cup at Vicarage Road, Watford and Crystal Palace were not in their best shapes. Both teams have had inconsistent runs in the Premier League since late February, with the away side worse off only able to sit just a few places above the relegation zone. Prior to this game, Watford and Palace lost to Manchester City and Brighton respectively, thus making them hungry for a win in this FA Cup tie.

Watford and Palace have met twice in the league this season and both matches showed that Watford are the better side of the two. Despite that, we can’t only look at the league records since this match is not a league fixture. Back in 2016, both teams met in the semi-final of the FA Cup and Palace won. Pride was at stake since both teams had their own agenda of revenge in this match.

However, just like their last two league meetings, Watford once again won this match 2–1. Watford’s dominant defensive display was the reason for this narrow win that secured a precious ticket to Wembley. In the semi-final, Watford will face Wolverhampton Wanderers, who defeated Manchester United in another tie. This piece will analyse how Watford’s brilliant performance helped them to defeat Crystal Palace. 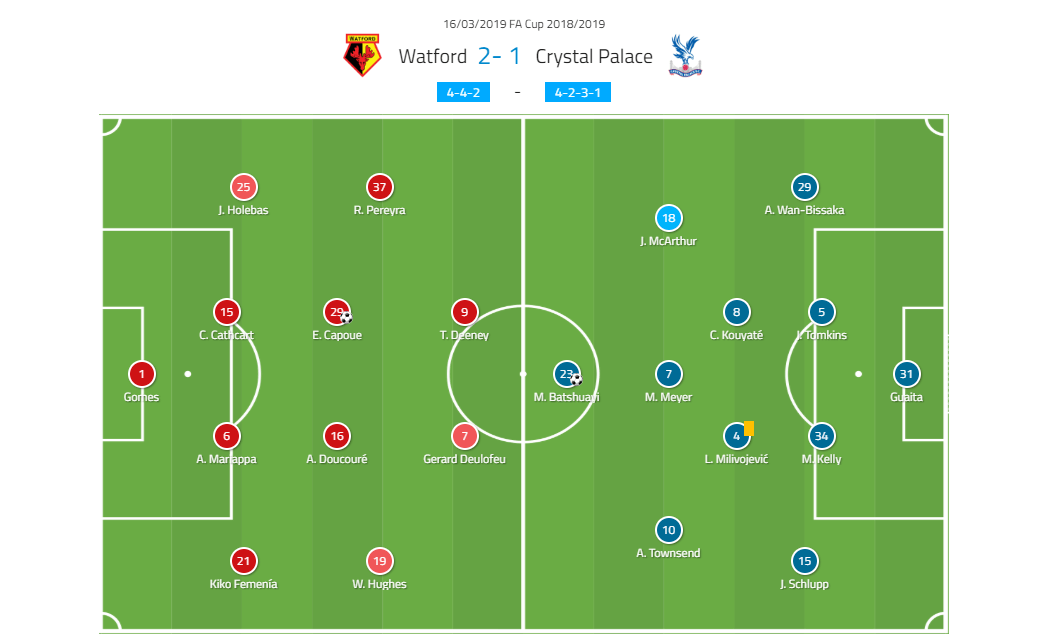 Javi Gracia opted for 4–4–2 in this match. Veteran goalkeeper Heurelho Gomes was trusted to start between the sticks, which may have been his last ever start prior to his retirement at the end of the season. Former Spurs midfielder Etienne Capoue played alongside Abdoulaye Doucoure in the middle of the park. Up front, captain Troy Deeney and former Barcelona man Gerard Deulofeu led the front line.

Meanwhile, Roy Hodgson chose 4–2–3–1 for his team. Ex-Liverpool defender Martin Kelly started with James Tomkins as Palace’s centre-back pairing. In front of them, there was the duo of Luka Milivojevic and Cheikhou Kouyate. Chelsea loanee Michy Batshuayi was selected as the target man, supported by Andros Townsend, Max Meyer, and James McArthur behind him.

Cautious approach from the home side

Despite playing at home, Watford chose to play more safely in this match. They happily sat in a compact mid-block 4–4–2 for most of the game.

When they got the ball, Gracia asked his men to play more quickly by sending the ball to the front as early as possible. Their main outlet was Deulofeu with his great pace and excellent dribbling ability. That skill set enabled Watford to send long balls for him behind Palace’s defensive line.

Watford targeted the space behind Kelly to attack. The reason behind that is mainly because Kelly is not a regular starter for the visitors. His lack of defensive quality compared to Tomkins gave Deulofeu a qualitative superiority over him.

Watford’s alternative when bringing the ball forward is by using their talisman Deeney in the left half-space. Deeney possesses superb strength that allows him to win physical duels easily. By drifting to the left half-space, Deeney temporarily switched positions with former Juventus player Roberto Pereyra, who gladly moved into his vacated area.

In that half-space, Deeney’s physical prowess enabled him to win aerial duels easily against Palace’s right-back, Aaron Wan-Bissaka. Sometimes McArthur or Kouyate had to support the defender in such physical duels. Deeney then was tasked with laying the ball off to Pereyra inside the box, who had Deulofeu next to him.

The visitors’ 4–2–3–1 shifted into 4–4–2 when they didn’t have the ball in a similar set-up used by the home side. In that 4–4–2 Meyer stepped up and joined Batshuayi to form a temporary front two.

When they got the ball, Palace moved back to their initial 4–2–3–1. In this shape, they tried to focus their attack on the central part of the pitch. They would place all of their attacking midfielders near to each other, thus enabling them to combine more easily.

Watford reacted to the inside movements of Palace’s attacking midfielders by congesting the central part of the pitch even further. Watford’s central-focused 4–4–2 then got exposed because they would abandon the far-side flank.

Palace exploited that by using Milivojevic to send diagonal passes for Wan-Bissaka on the right-hand side flank. The right-back then would have plenty of time and space to create chances through his crosses.

However, the same didn’t happen on the opposite side. Instead of staying wide, Palace’s left-back Jeffrey Schlupp chose to tuck inside. Schlupp’s decision to move inside created an unnecessary overload for Palace in the central area. By doing that, Schlupp prevented his team from spreading wider and therefore reduced the threat on their left-hand side.

One from the training ground

Once in the first half, Watford used a well-planned corner kick routine that caught Palace’s defensive department off guard. Unlucky for the home side, the cross was too powerful and the routine failed.

In that sequence, Palace used a hybrid of man-marking and zonal-marking. Kouyate, McArthur, Tomkins, Wan-Bissaka and Kelly were tasked with marking their respective opponents tightly. Inside the six-yard box, Milivojevic and Schlupp were tasked with defending zonally.

It seems that they were unaware of Will Hughes, who was the shortest and the least logical option to win an aerial duel. Actually, Hughes was Watford’s target in this routine. All five of his teammates were instructed to attack the six-yard box, pulling their markers in the process.

In contrast, Hughes was instructed to make an reverse run from the six-yard box to the penalty spot. The former Derby County player started his run from everyone’s blind spot, making all of Palace’s defenders unaware of his movement. The 23-year-old then positioned himself completely free in the heart of the penalty box but couldn’t reach the ball due to the over-hit cross.

Ironically, Watford got a corner kick just seconds later, and after a mini pinball sequence the ball found Capoue’s feet to make it 1–0.

Watford put on a brilliant defensive display in this game. Their 4–4–2 worked seamlessly to close the central lanes, and doing so stopped Palace from breaking through their block. The 4–4–2 forced the men in white to play wide or send ineffective long balls to their striker.

Palace’s midfielders liked to rotate themselves in order to link up plays and combine easier. Watford also reacted very well to such movements to seriously nullify the visitors’ attacking threats.

As explained before, Hodgson instructed his attacking midfielders to be close to each other, and even make overloads on one side whenever necessary. Gracia responded by sending at least one player to that side in order to match the number of Palace’s players in that area. This approach prevented Palace from creating their preferred overload many times.

Even though Watford were able to shut Palace down for most of the match, one error was enough to give the visitors their much-needed equaliser. Adrian Mariappa was responsible. Mariappa was not under any pressure when he received the ball but somehow he made a clumsy pass that was easily intercepted by Batshuayi. The Belgian striker then calmly slotted the ball past Gomes to draw the score level.

Knowing that a home win at home was needed to boost the squad’s mentality, Gracia went bold. He pulled right midfielder Hughes off for an attacker, Andre Gray. Deulofeu then moved to the right wing and Deeney slightly pulled back behind Gray. The reason was to add more threat down the right flank and also add more physical prowess in the middle.

Gracia’s grit paid dividends because Gray registered his name on the scoresheet just shortly after he came on. Later in the game, Deeney could sometimes be found free just outside the box. His strength and striking ability didn’t drop until the end of the match, when he almost brought Watford a third goal.

One can be dominant by playing defensively, and that’s what Watford showed in this match. Their defence was rock solid for most of the match, and they adapted very well to Crystal Palace’s attacking approach. On top of that, They were very effective and clinical in their attacks, not to mention Gracia’s late game adjustment.

To be honest, they should have won by one or two more goals with that performance. It is a much-deserved win for Gracia and his team. Now with the FA Cup semi-final ticket in the bag, a historic feat is only two matches away for the Hornets.