How did Arsenal exploit their midfield freedom to end United’s unbeaten run?

Last Thursday night, Arsenal disappointingly lost 3–1 to Ligue 1 mid-table side Rennes in the Europa League round of 16. Even though they started the game very well with Alex Iwobi’s goal, the match eventually turned into a nightmare for Arsenal. A red card for Sokratis Papastathopoulos and an own goal by Nacho Monreal added more salt to Arsenal’s wound, making Unai Emery have to work harder for the second leg fixture.

In contrast, Manchester United are enjoying an extended honeymoon period under Ole Gunnar Solskjaer. The Red Devils surprisingly pulled off a great miracle by defeating Paris Saint-Germain 3-1 at the Parc des Princes, just a day before Arsenal’s defeat. That comeback win made United the first ever side in Champions League history to advance into the next knockout stage after losing by two goals at home.

Looking at the recent results of both teams, not forgetting their last encounter in the FA Cup just weeks ago, United were the clear favourites prior to this match. Tottenham‘s slip against Southampton gave United another mental boost, because a win in this match draw them level with Spurs’ point tally in the Premier League. Against almost all pre-match predictions, Arsenal won this match 2–0, thus forcing United back to fifth place. How did Emery outsmart Solskjaer? 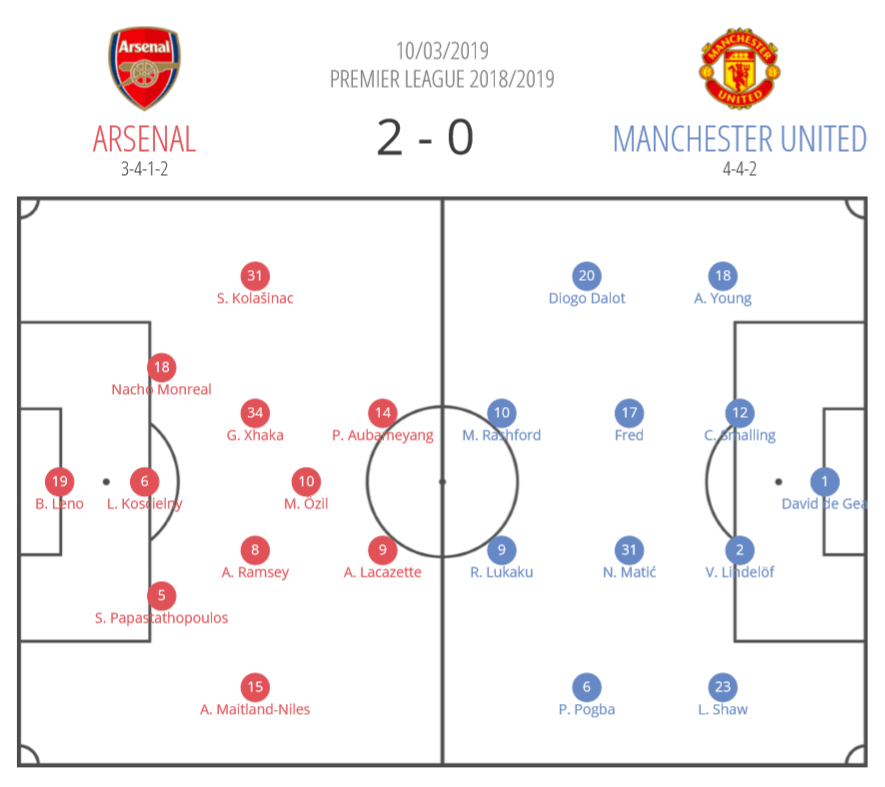 Emery opted for a 3–4–1–2 shape. Former Leverkusen goalkeeper Bernd Leno started between the sticks ahead of Petr Cech. In the middle of the park, Granit Xhaka was supported by Mesut Ozil and future Juventus player Aaron Ramsey. Alexandre Lacazette and Pierre-Emerick Aubameyang were chosen to lead the front line. On the bench, there were names like Matteo Guendouzi, Denis Suarez, and promising starlet Eddie Nketiah.

Meanwhile, Solskjaer opted for a 4–4–2 setup. In the engine room, Nemanja Matic returned to play alongside Fred, while Paul Pogba also started after being suspended for the Champions League clash. Up front, Marcus Rashford and Romelu Lukaku were given Solskjaer’s trust to conduct United’s attacks. Anthony Martial returned to the squad but had to start the game from the bench, next to another United prospect in Mason Greenwood.

On the ball, Arsenal opted for 3–1–4–2. In this shape, Xhaka was tasked with bridging the gap between the back three and the advanced midfielders. By positioning himself between United’s forward and midfield lines, Xhaka could often be found free to receive and distribute the ball forward quite easily. Sometimes, Ozil or Ramsey would drop alongside Xhaka and make a temporary 3–4–1–2 in order to smooth their build-ups.

Arsenal also used their signature left-hand side overload. Both of the Gunners’ attacking midfielders would happily drift wide to support Sead Kolasinac on the left flank. This would allow Arsenal to enjoy a 3v2 advantage in that area, against United’s Fred and Diogo Dalot. The goal of this overload was to release one of the three, usually Kolasinac, behind United’s right winger or full-back before sending an incisive, low cut-back for one of the strikers.

When they didn’t have the ball, Emery set his team up in a 5–2–3. In that shape, Ozil’s position was more advanced than his midfield partners between Aubameyang and Lacazette, who split into the half-spaces due to Ozil’s positioning.

With three players in the forward line, Arsenal were able to mirror United’s first line of Ashley Young, Chris Smalling, and Victor Lindelof. Furthermore, Xhaka and Ramsey were positioned quite close to the forwards thus shutting down every central passing lane and closing Fred and Matic in the process. This forced United to play wide from their wing-backs.

Solskjaer was bold in this match, especially in his midfield set-up. At first, we saw United  in a 4–4–2 with Dalot as a right midfielder, and Pogba on the opposite side. Throughout the match, Solskjaer gave Pogba license to roam forward but also with a defensive task alongside Fred and Matic.

Conversely, Dalot was almost completely held back due to Kolasinac’s aggressive movements and the overloads he made with Ozil and Ramsey on United’s right. This made Pogba play as a left winger sometimes when United shifted into a lopsided 5–2–3/5–3–2 off the ball.

This is where the problem lay for United. With more attacking license entrusted to Pogba, that meant Fred and Matic were given more defensive burden. This happened because Pogba was late to track back so often, allowing Ozil to roam freely in the area vacated by the Frenchman. The United midfield duo had to cover a lot of ground around them.

In the hybrid defensive shape deployed by Solskjaer, Pogba was given too many tasks to do. Sometimes he would drift very wide to follow Maitland-Niles. This movement combined with a lack of pressure from Fred and Matic to Xhaka in the central part of the pitch was the main reason behind Arsenal’s opening goal.

… but not only him

In truth, the whole United midfield was punished. There were many reasons why that happened, primarily due to the uncoordinated pressure from United’s first and second lines. Sometimes when Pogba, Rashford and Lukaku decided to press Arsenal’s back-line at the same time, Matic and Fred opted to stay back to mark their respective man. This allowed Xhaka to receive freely, thus allowing him to bring the ball forward without any hesitation.

Another issue was Solskjaer’s instruction to his defensive midfielders. Rather than to defend zonally, Solskjaer instructed Matic and Fred to follow Ozil and Ramsey whenever they dropped to help Xhaka. A little smart movement from Xhaka, Ozil or Ramsey added to United’s midfielders’ naivety resulted in an advantage for Arsenal.

Arsenal had midfield issues too

Even though Arsenal’s 5–2–3 worked well to stop United from building up their play smoothly, the shape actually had some flaws. Problems would arise when United were able to bypass Arsenal’s first line of pressure, usually by finding Pogba or Luke Shaw on the left-hand side. If United were able to do so, they would be given with acres of space in the middle of the park. The reason was Arsenal only had two midfielders in that area – almost the same problem that United faced.

With huge ground to cover for Ramsey and Xhaka in midfield, they would logically position themselves in the central part of the pitch. United’s way to unlock Arsenal’s defence was by placing players in the half-spaces, mainly Fred and Pogba. Arsenal faced a lot of trouble when United shifted the play quickly from one half-space to the other.

A lack of numbers in Arsenal’s midfield would sometimes be compensated for by the aggressive movement from one of the defenders, usually Koscielny. This was not the case however if somehow Xhaka was caught alone by United’s counter-attacks. If that happened, Arsenal’s wing-backs would move inside to add more numbers in the middle.

Clean sheet but not clean defending

This season Arsenal have had one of the worst clean sheet records, with only five prior to this match. In this match, the Red Devils managed to create 2.37 expected goals, compared to Arsenal’s 1.53. That includes the fact that Arsenal’s second goal was a penalty. Their sloppy display, especially when defending the far post, was the main reason.

United were very smart whenever they were able to gain control over Arsenal’s midfield. Pogba and Fred would happily share the ball to the overlapping wing-back next to them, then the wing-back would try to cross the ball into the far post with Lukaku as the main target.

Lukaku was chosen as the target because he ‘only’ had to face Monreal at the far post. The Belgian was far superior physically. This also happened because Monreal had less defensive support from Kolasinac who actively joined the attack throughout the match.

No improvements from the defensive department

Throughout the game, the defence was not so coordinated either. There were some miscommunications from the defenders when Arsenal tried to play an offside trap which allowed at least one United striker free to receive. The most notable was Lukaku’s close-range attempt in the second half.

In that sequence, Monreal was the only defender who was aware of Rashford’s incisive pass. He knew that the ball would be played to Lukaku, so he chose to jump forward in order to make the Belgian offside. Somehow, Koscielny and Maitland-Niles didn’t realise that and were caught napping in the penalty box. Fortunately, Leno came in and made a great save with his feet to keep Arsenal leading.

This far post issue happened again in the dying minutes of the game. This time it was Rashford who beautifully escaped Arsenal’s defence to make a free header at the far post. The guilty party was Maitland-Niles, who was caught napping once again and allowed Rashford to attack the ball. Again, luckily for the home side, United were unable to capitalise.

To have a lot of bodies in a back-five system but still concede so many problems at the far post raises questions for Emery’s ability to set up his defensive department. This is a serious issue for the Spanish manager that he has to solve immediately.

To be honest, the result didn’t reflect what happened on the pitch. Although both teams made a relatively similar amount of attempts on goal, it was United who produced more quality and threat in the final third. The far higher number of expected goals as mentioned above is strong evidence for that argument.

Arsenal also lacked quality in their midfield and defensive department, showing flaws in Emery’s tactics. Even so, United failed to score while Arsenal scored twice. Arsenal took three points and moved into fourth place, while Solskjaer was humbled with his first domestic defeat at United. This win surely boosts Arsenal’s mentality to face Rennes in the return leg of Europa League this Thursday night.

So Arsenal, with Unai at the wheel, tell us how good does it feel?