To conclude week two of the 2019 Major League Soccer season, the Portland Timbers travelled to Banc of California Stadium to play Los Angeles FC. Managed by Bob Bradley, LAFC reached the MLS Cup playoffs in their inaugural 2018 season, losing in the first round to Real Salt Lake. The team’s style of play from the start has been defined by quick, skilled attacking from the flanks, and their attractive displays of football continued this past weekend.

Led by talismanic midfielder Diego Valeri, Portland put on a firm fight, orchestrating hopeful counter-attacks and organised, defensive actions. Eventually, the Black and Gold wore out the opposition and won their second match. 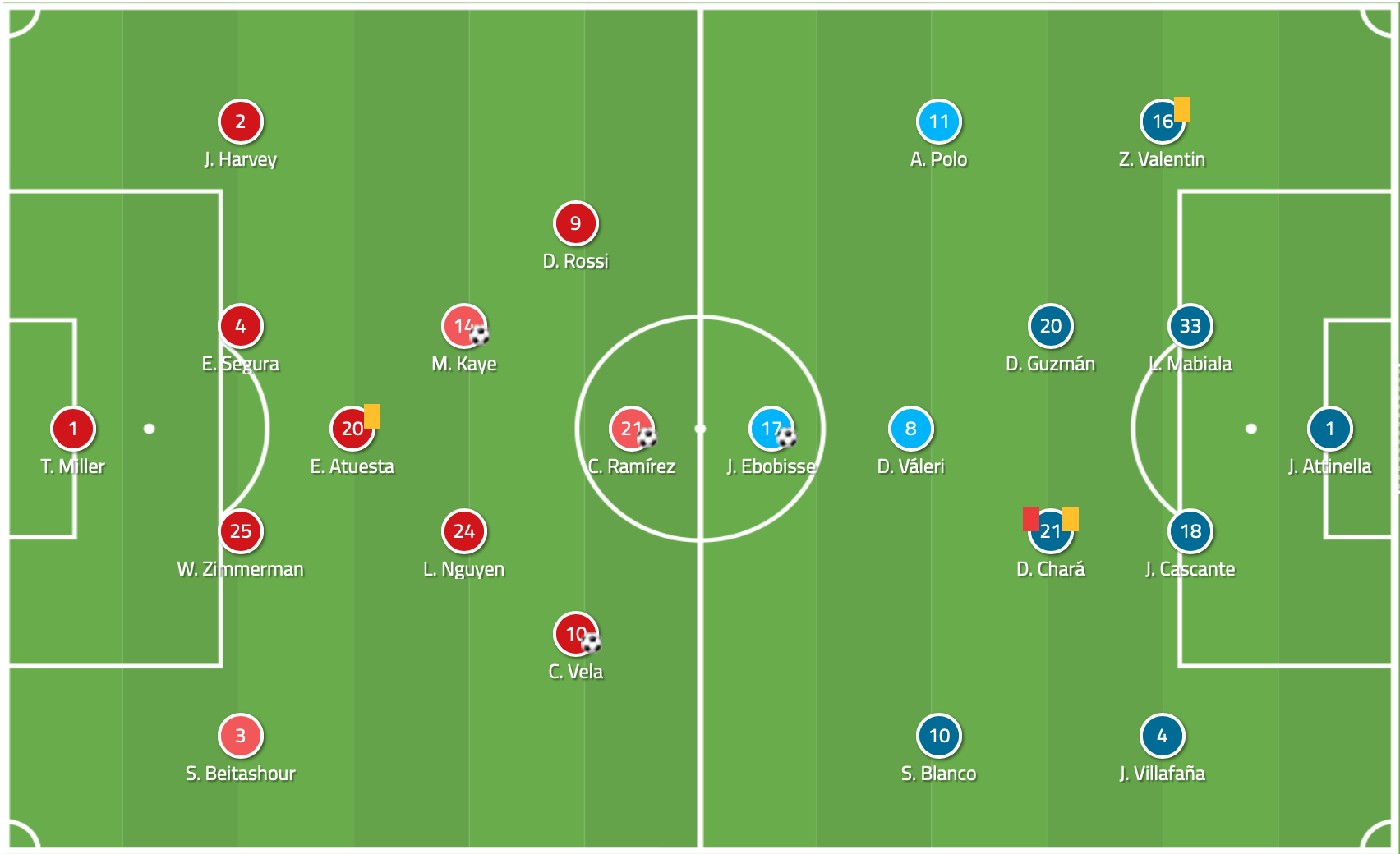 LAFC went with an unchanged 4-3-3 from their week one 2-1 comeback win against Sporting Kansas City, in which winger Diego Rossi and substitute striker Adama Diomande scored. In defence, Walker Zimmerman has had an impressive year at centre-back both for club and country. After rumours of a European transfer, Zimmerman re-signed with LAFC this past winter, and also scored against Panama in a friendly for the United States Men’s National Team.

The midfield, despite losing Benny Feilhaber to Colorado, is beginning to show consistency with Colombian Eduard Atuesta playing as the single pivot. Christian Ramirez began up front after scoring 10 goals in MLS last season.

Portland also chose to go unchanged, returning to their 4-2-3-1 after a wild 3-3 draw last week which saw the Argentinian connection of Valeri and Sebastian Blanco link up to score.  Diego Chara has long been a physical, steadfast presence in front of the back line.

Both attacks have key individuals they rely on. Former Arsenal and Real Sociedad winger Carlos Vela at LAFC, and 2017 MLS MVP Valeri at Portland. Both led their teams in the 2018 season with 14 goals each and 11 and 12 assists respectively. Valeri completed the most key passes in all of Major League Soccer in 2018 with an impressive 121. While Valeri notched an assist, Vela ultimately took over the match in an emphatic manner.

LAFC’s initial game model was to use the wide areas to make quick transition passes from the full-backs and wide midfielders to the wingers. Portland in turn chose to combat this using aggressive defensive movements to intercept passes in their own half. This initially was effective as Portland attempted to counter-attack past LAFC’s high, possession-heavy back line.

Portland’s defensive structure and discipline opened up opportunities from midfield. This method gained even more potential when Steven Beitashour, one of the better right-backs in recent MLS history, was forced off with a head injury in the 32nd minute.

Bradley elected to bring on Latif Blessing, an energetic, attack-minded winger. While the Ghanaian is a very effective attacker, his defensive positioning – or lack thereof – became an extra liability for LAFC.

Both Portland and Los Angeles traded blows as both scored off set-pieces within the first 30 minutes of the match. LAFC were able to limit the Timbers’ attacks however, thanks to sound defensive cover provided by Zimmerman and midfielder Mark-Anthony Kaye.

Kaye also scored LAFC’s first goal of the match, which led to a euphoric celebration from The 3252 (the team’s main supporter group). The Canadian international’s promising development was hindered last season when he fractured his ankle, which required surgery. This was just his second match back from the injury.

“[Kaye is] the important player on the team. Maybe he’s not the most fun to watch but he is always covering his teammates.” – Carlos Vela in the post-match press conference, via LAFC

Fortunately for LAFC, despite Portland’s assertiveness, the skill and structure of the team was still enough to control most of the match.

Coming back for the second half, the common or safe instruction might have been to limit Blessing’s runs forward or to swap a new defender into that position entirely. Instead, Bradley and the LAFC coaching staff allowed, and almost seemed to encourage, more attacking runs by Blessing, notably in the advanced right half-spaces.

This rather risky play ended up paying off for LAFC, as the attacks in the second half seemed to consistently overwhelm Portland’s back line through quick passing movements and numerical superiority.

After receiving the ball from the right side, Atuesta sees midfield teammate Lee Nguyen, who is facing away from goal. The 21-year-old waits until Valeri presses him from the middle of Portland’s half, then passes down to Nguyen, who subsequently passes to the open man in the space Valeri was occupying.

The switch of play continues through to the right side of the pitch. Blessing, again playing forward and in a dangerous area, makes a quick dribble past the Portland midfield. This forces left-back Jorge Villafana to hesitate, which gives Blessing time to complete a pass to Vela into the space Villafana would normally cover as a left-back.

These aggressive, confident attacks are the lifeblood of LAFC, and winger Carlos Vela is often the primary catalyst in said attacks.

Carlos Vela has had a brilliant beginning to his MLS career. In 2018, he was only one of six players to reach double figures in both goals and assists, and was named in the Major League Soccer team of the season. Vela’s dominance shone on Sunday due to seeing the ball often and throughout the match, acting as the conductor in LAFC’s attack.

Vela dribbled across Portland’s deep midfield, drawing both the defensive midfielders and defenders forward. This created space behind the Portland back line.

After receiving the pass from Vela out wide, full-back Jordan Harvey sees this exploitable space and hits a pass to Ramirez, who scores the opening goal. Tallying a total of one goal, two assists, six shots, and four key passes, this dominant performance helped Carlos Vela win Major League Soccer Player of the Week honours. Vela proves himself time and time again to be one of the most overriding players in MLS.

After an early injury to one of the most reliable right-backs in the league, Portland looked like they had an opportunity to take advantage, but the individual skill and halftime tactical adjustments of LAFC proved far too potent. The Black and Gold showed grit and perseverance, while executing smart, precise tactics to maintain their unbeaten start to the season.

Since their inception, the Californian side have scored more goals than any other team in the league, and it would not be entirely surprising to see them become a favourite for the MLS Cup down the stretch.

Portland meanwhile have had an uncomfortable start to 2019. The Timbers will now travel to Cincinnati for FC Cincinnati’s MLS home debut. A third winless match could be on the cards as they go without Diego Chara, who received a red card late in this match.