The Blue dream has come to its conclusion. Dinamo Zagreb tried as much as they possibly could have, but at the end of the day, Benfica are a better, bigger and more organised team than the Blues from the Croatian capital. There was always going to be only one winner after the brawl in Portugal.

Still, the underdogs were one step away from a historic victory, and the biggest European achievement in the club’s history. Dinamo Zagreb took Benfica all the way to extra-time only to suffer a hard 3-0 defeat at the hands of their hosts.

This tactical analysis will use statistics to determine how in the battle of the Estadio da Luz, Goliath crushed David and advanced to the quarter-finals of the Europa League. 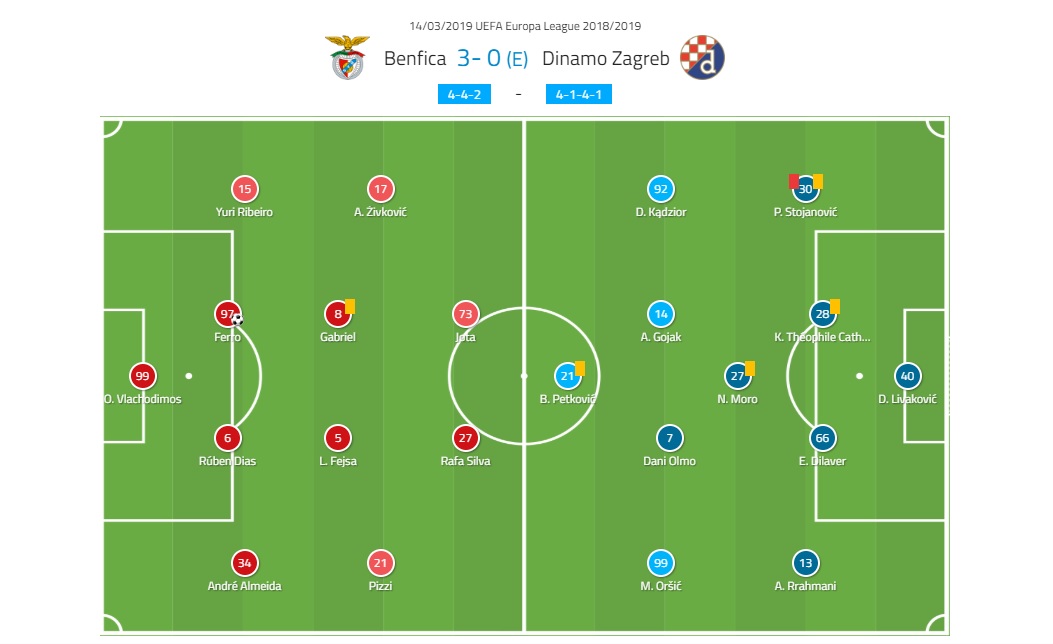 Nenad Bjelica decided not to tamper too much with the team that got him a huge win at the Maksimir stadium in the first leg a week ago. Still, Dinamo Zagreb arrived in Portugal as an injury and suspension-ridden team with some notable absences, which ended up playing a big role in the final result.

In place of Ademi and Šunjić in midfield came Amer Gojak and Nikola Moro respectively, while Amir Rrahmani deputised for the suspended Leovac at left-back. The rest of the team was the same as they were a week ago.

Just like last time, Bruno Lage managed to surprise us with his choice of personnel, especially considering his team were the ones chasing a deficit and needing an overall strong performance, offensively and defensively, to get through the tie.

Still, with all that in mind, the Portuguese titans shuffled the cards once again. Some interesting changes were made as Benfica showed that they indeed prioritise the domestic league over European success.

Both full-backs were, therefore, swapped and in place of Alex Grimaldo and Sebastien Corchia came Yuri Ribeiro and Andre Almeida respectively. The omission of Grimaldo seemed the oddest choice as the young Spaniard was at the heart of all of Benfica’s attacks a week ago.

In fact, the only players to start both legs were the man between the sticks, his centre-back pairing and Gabriel in the middle of the park. Even the likes of Joao Felix were benched. Of course, Lage could not count on Haris Seferović, who got injured in Zagreb and was replaced by Jota.

Benfica opted for a 4-4-2 formation but went through a number of different systems by the time the final whistle was heard at the Estadio da Luz.

Just as was seen in the first leg in Zagreb, Dinamo had a defensive mindset. It seemed like they went to Lisbon solely to keep their 1-0 lead alive instead of adding more fuel to the fire. Even though their defensive prowess and organisation pulled them through to a victory on home turf, the plan backfired away in Portugal.

As expected, Benfica saw almost all of the ball throughout the whole game. An interesting fact to notice here is that Dinamo Zagreb never had the advantage in the possession, not once for the whole 120 minutes, as can be seen in the graph below.

Apart from the visitors’ choice to willfully surrender the ball at times, there were some other factors that further helped Benfica achieve this feat. The first one was the high intensity with which they played throughout the whole match and the enormous press they put Dinamo Zagreb under.

While on the ball, Benfica looked to stretch Dinamo as wide as they possibly could, and more importantly, keep them moving at all times. This gave them a chance to breach their compact defensive shape, and tire their opposition out.

When off the ball, the home team were quick to collapse onto the ball-carriers. They always pressed high up the pitch, and with numbers, which led to Dominik Livaković not having good passing options higher up the pitch.

During the young keeper’s distributions, Benfica would use their numerical superiority to win duels and collect loose balls, lowering Dinamo’s chances of getting those 50/50 situations in their favour. Once again, Bruno Petković was the main target up front, and the one that big man Livaković aimed for more often than not.

While in the first leg that was more successful since Benfica did not prepare a real counter, and Petković had a much better game back then, at first it did not seem to work in Portugal. Dinamo’s man between the sticks ended the game with 8/12 long balls, which was not necessarily sub-par, but the targets he did hit were not in any promising situations to produce an instant impact.

By controlling Dinamo’s distributions and keeping them holed up in their own half, Benfica managed to dictate the tempo without letting their opponents have a say in the case.

Dinamo Zagreb fail to stop entry to the final third

Even though the first half of the game was relatively quiet and despite having all the ball and all the freedom to attack, Benfica struggled to create any real chances. However, they would often get everything right but the finishing touches were not good enough.

They managed to enter the final third with next to no resistance by constantly getting the better of Dinamo’s structure in midfield. Notice below how Benfica use their numerical superiority and bad positioning of their markers to get the ball between the lines, and into the final third.

The forwards would drop deeper to present multiple passing options to whoever was on the ball. Another example can be seen in the image below as the ball-carrier has three options presenting themselves. The full-back slowly drifts behind the backline in case Benfica want to try and breach the defence through the wings.

Dinamo’s structure cannot cover for both movements, as either solution leaves the other option open. Most of their problems arose from just one man being out of position. In this instance, Amer Gojak leaves too much space, and doesn’t press his marker on time.

This was a regular occurrence during the game as Benfica found free space time and time again. In quick transitions, Dinamo Zagreb had a lot of trouble keeping pace with the Portuguese team. The swapping of sides was slowly taking a toll on their stamina but was also constantly messing with their defensive structure.

When they caught their breath, Dinamo would deploy an extremely low (or medium at best) block, going wide with the back line when necessary but staying compact through the middle most of the time.

However, during transitions and Benfica’s swift entry into the final third, and overcrowding the sides with overlapping full-backs, Dinamo left huge gaps between the lines. With all the talent and technique on the home side, they had no trouble at all in exploiting those chances and constantly finding their men.

Playing not to lose

Right from the start, it was evident Dinamo would not press for a goal, nor would they often break their formation in order to cause a real threat for the opposition. Their only real chance was in counter-attacks and through the pace of Kadzior and Oršić.

Benfica did give the away team a couple of palpable chances on the night, mostly upon losing the ball when overplaying an attack, which they did quite often (158 losses on the night). However, Dinamo were not vigilant or lethal enough to punish those losses of possession and get themselves a goal and a chance of progressing.

Out of 10 counters Dinamo had during the game, only one ended up with a shot on goal. Overall, their strikers, especially Bruno Petković, who is such an integral part of their team, had a pretty bad night. Whenever they aimed long balls at him he was well marked, and he couldn’t dribble past the defenders as easily as he had done in the first leg.

The main reason for Dinamo Zagreb’s counters breaking apart were Benfica’s numbers in both attack and defence. Notice above how even though the blue team is on the offensive, the hosts manage to pull back enough of their troops to create a disadvantage for Dinamo, stopping the attack almost immediately without any repercussions.

In short, Dinamo had to make better use of their chances. Benfica’s high defensive line meant that there was some space behind their backs almost at all times, and the pace of their opposition could potentially lethally harm them.

Here, for example, Dinamo steal a ball away and commence a quick counter. Petković absorbs almost all the pressure from Benfica’s back line and then passes the ball to Gojak who finds Oršić speeding into the free space behind the defenders.

Unfortunately, the finishing touches were not there to reward Dinamo with a goal but it was a sign that they could do some damage if all the pieces fell into place. In the end, it was not to be.

Bruno Lage also made sure to keep his troops fresh enough to keep the intensity high at all times, which was something Bjelica failed to replicate. Early substitutions at the beginning of the second half and the introduction of two important pieces in Barcelona youth product Grimaldo and Jonas meant that Benfica were only warming up and would not slow down at any cost.

It’s not that Dinamo’s defence was worse than in the last encounter, but that Benfica were more relentless in their attacks, which eventually broke the opposition down. The Portuguese team were this time able to play to their strengths so the left flank was once again revitalised.

Notice, however, that both the right and the left are equally used, which is an important detail, and also a difference from the last game. Now the emphasis was not solely on utilising their better wing, which was the left, but to keep the attacks going at all times.

Both full-backs overlapped and even though Dinamo once again tried committing numbers to patch up the bleeding, some individual mistakes, as well as brilliance from their opponnents, prevailed.

As much as this result feels expected, Dinamo Zagreb should be proud of their accomplishment in the tournament. Who knew that failing to qualify for the Champions League, where they were regularly everybody’s punching bags, and instead going to the less coveted Europa League, would be the best thing to happen to the boys from the Croatian capital?

This might have been a hard defeat but it was a true champion’s fall. Dinamo showed both character and skill to compete with the best. With that being said, if we ever needed more proof of why just trying to survive for the whole 90, or in this case 120 minutes, is not a good idea, this game just gave it to us. Still don’t believe us? Go ask Atletico Madrid.

Benfica, on the other hand, managed to prevail using their academy players, rotating and coming from behind against a highly defensive team, doing so in impressive fashion. The Portuguese team only confirmed that they truly are one level above their opposition. Now comes the more difficult part: Eintracht Frankfurt, of course, trying to beat that old European curse of theirs…