With most big nations suffering unbelievable upsets in this World Cup, England and France entered the last quarter-final with a real chance to win it all. After shocking the world by eliminating Spain, Morocco sent Cristiano Ronaldo’s Portugal back home in the other quarter-final of the bracket. While the African nation is far from an easy task, the winner between England and France had a real chance of going all the way. The stakes were as high as ever, and the opportunity for ultimate glory was enticing.

It was France who came away with the win, but the match was a fascinating tactical battle between the two European powerhouses. The tactics set the stage, and the stars led the show. Real Madrid midfielder Aurélien Tchouaméni opened the score with a beautiful shot from outside the box. In the 54th minute, Tottenham centre-forward and 2018 World Cup Golden Boot winner Harry Kane put England level with a penalty. To secure a spot in the semi-final, Olivier Giroud finished a beautiful cross from Antoine Griezmann with 12 minutes to go.

Upon a closer look, however, it was France’s effectiveness that guaranteed them the win. Despite England’s volume, France remained in control of the match and successfully executed Didier Deschamps’ game plan. This tactical analysis will explore the tactics behind France’s win over Gareth Southgate’s England. Specifically, this analysis will take a look at Southgate’s tactics in the match, and how the French overcame them.

Before starting, let’s take a look at both countries’ starting XI. First, with France, Didier Deschamps kept the same eleven from their win over Poland. In their usual 4-2-3-1/4-3-3 hybrid, Deschamps went with Hugo Lloris in goal, and Jules Koundé, Dayot Upamecano, Raphaël Varane, and Theo Hernández as the back four. The backline was rather asymmetric, as Hernández provides much more attacking support than Koundé. In the midfield, Aurélien Tchouaméni and Adrien Rabiot sat behind Antoine Griezmann as a free-roaming 10. Kylian Mbappé and Ousmane Dembélé flanked Olivier Giroud in the attack. 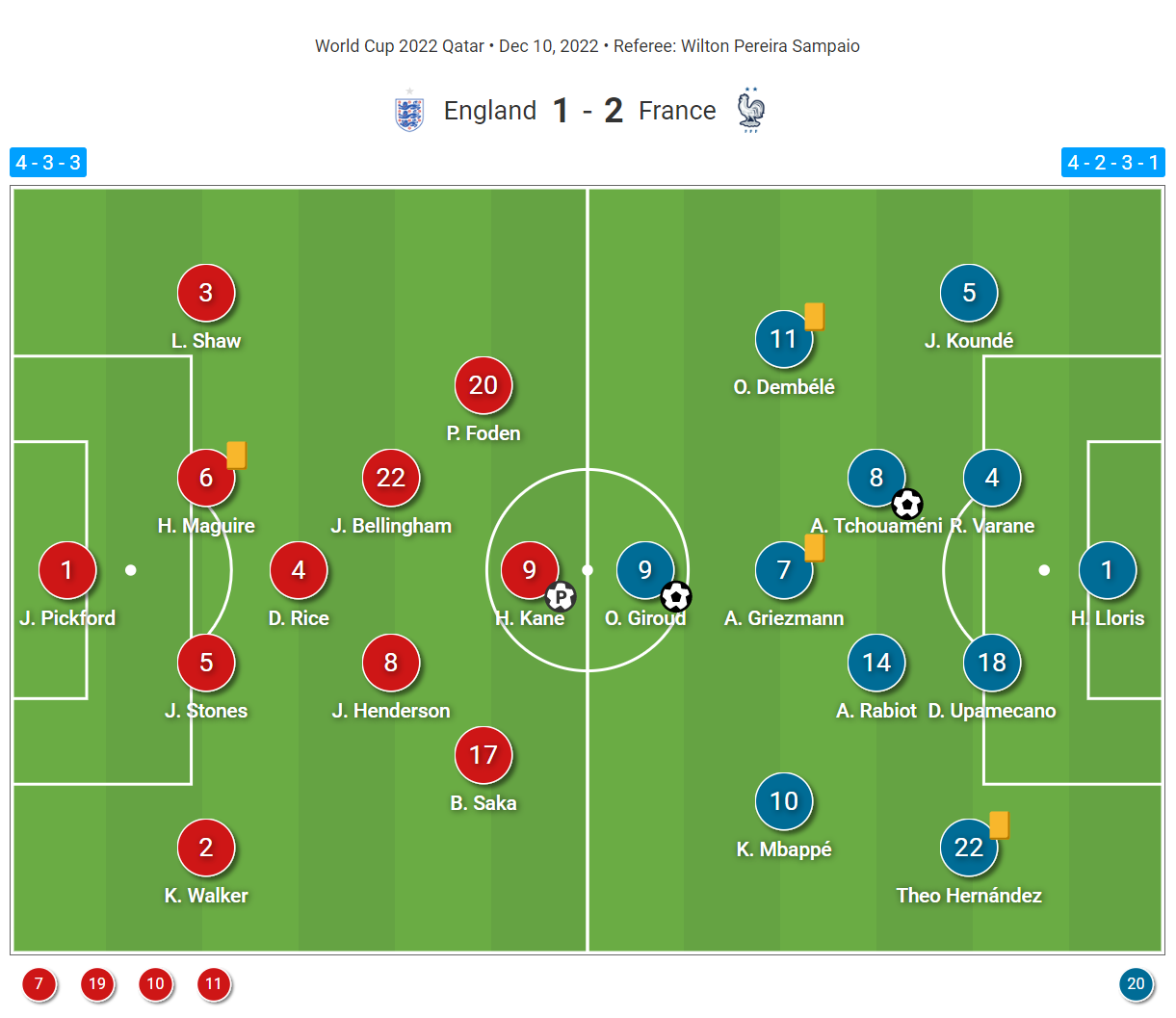 For the Three Lions, Southgate’s team selection was quite uncertain. Many believed the English manager would switch to a 5-3-2, in order to deal with Kylian Mbappé. He did adapt his tactics to deal with the PSG star, as we will see later. However, Southgate deployed the same 4-3-3 from the Senegal match.

Jordan Pickford was the number one behind Kyle Walker, John Stones, Harry Maguire, and Luke Shaw. Declan Rice was the single pivot behind Jude Bellingham and Jordan Henderson, and up top, Harry Kane was flanked by Bukayo Saka and Phil Foden.

As expected, the Three Lions controlled possession. England finished the match with 58.82% possession, but they struggled to be as effective as they usually are. Throughout the competition, Southgate’s tactics in possession proved to be extremely wing oriented. The 4-3-3 provides a perfect balance for this, with both central midfielders capable of supporting their respective winger and fullback. Occasionally, there was also support from Declan Rice or Harry Kane.

This style had an extremely attacking nature, as it depended entirely on a fluid and dynamic approach. England were at their best when they created numerical superiority in the wide areas and exploited it through positional rotations and dynamic combinations.

Southgate introduced a slight adaptation to their system, and it saw them become largely ineffective. Rather than maintaining their usual 4-3-3 structure, the Three Lions switched to a back three in possession. Kyle Walker tucked in alongside the two centre-backs as a safety measure to deal with Mbappé. Meanwhile, Henderson shifted wide almost as a wing-back, forming a 3-4-3. 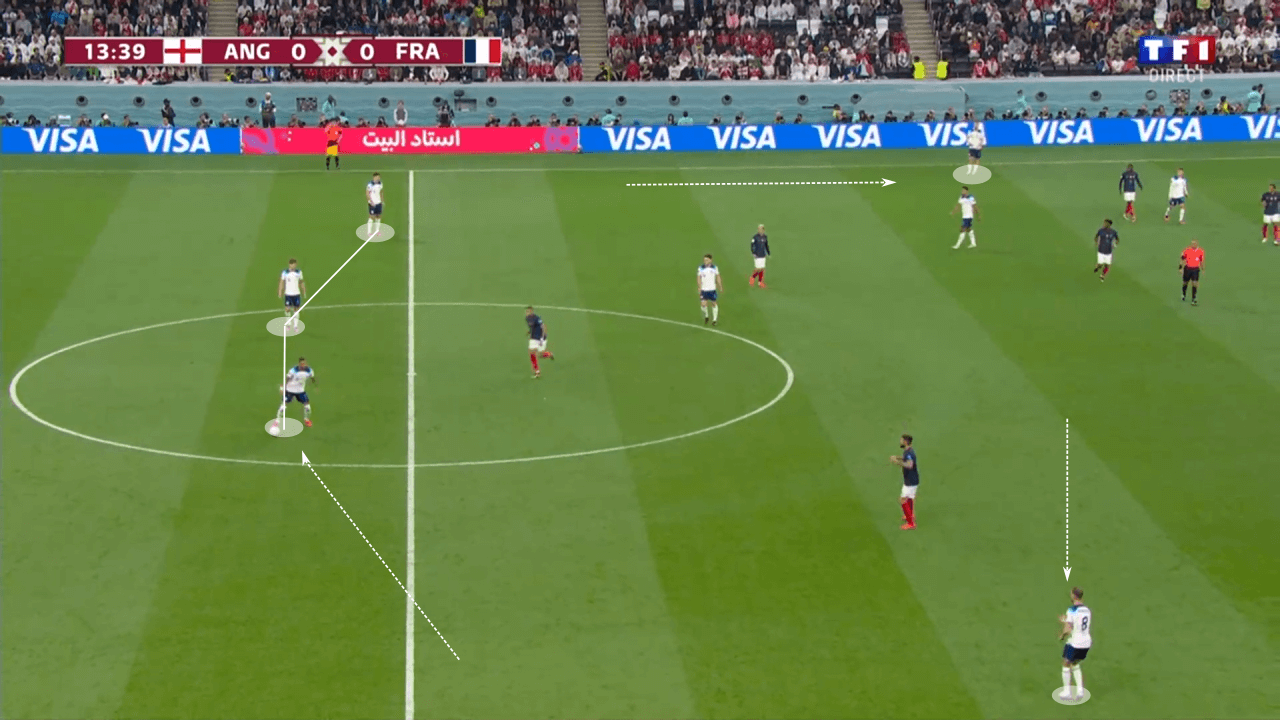 At the beginning of the match, Southgate’s men were mostly focused on the left side of the attack. Walker’s safer positioning made the right side much less dangerous, and with Luke Shaw supporting Bellingham and Foden, England focused their attack on the left for the majority of the first half.

However, France dealt with this extremely well. Their right side is usually much more disciplined defensively, with Dembélé being much more involved than Mbappé. Consequently, they were easily able to shift their block across and concentrate numbers on that side of the pitch. 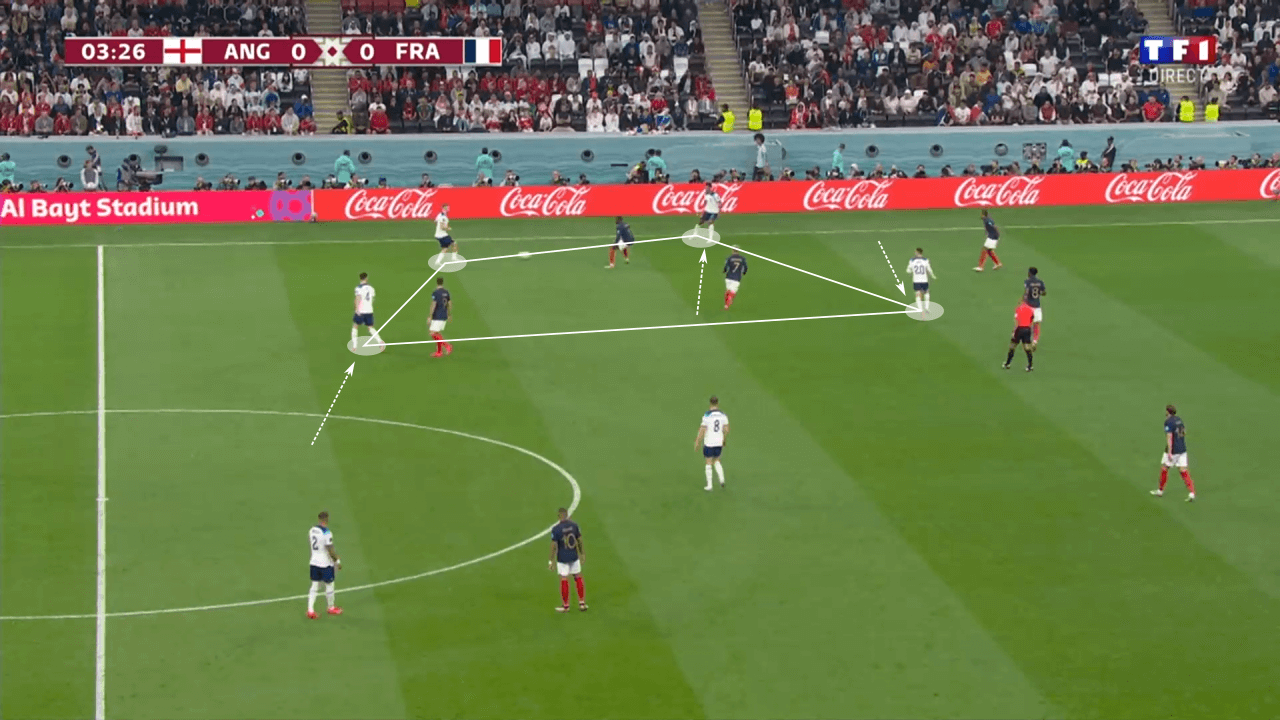 When England began exploring the right side more, they were quickly met with three French players. With only Henderson and Saka on that side, they struggled to progress with success, at least in positional attacks. In attacking transitions, or at least more vertical attacks, they found a little more success. 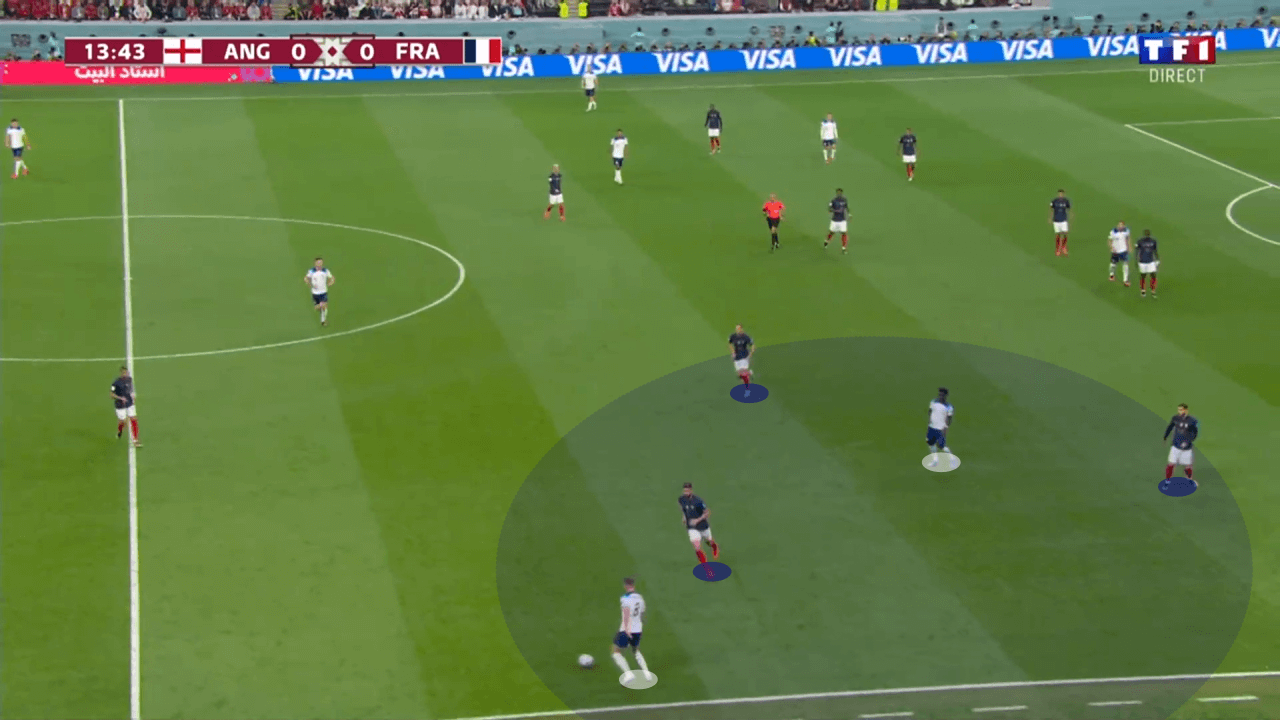 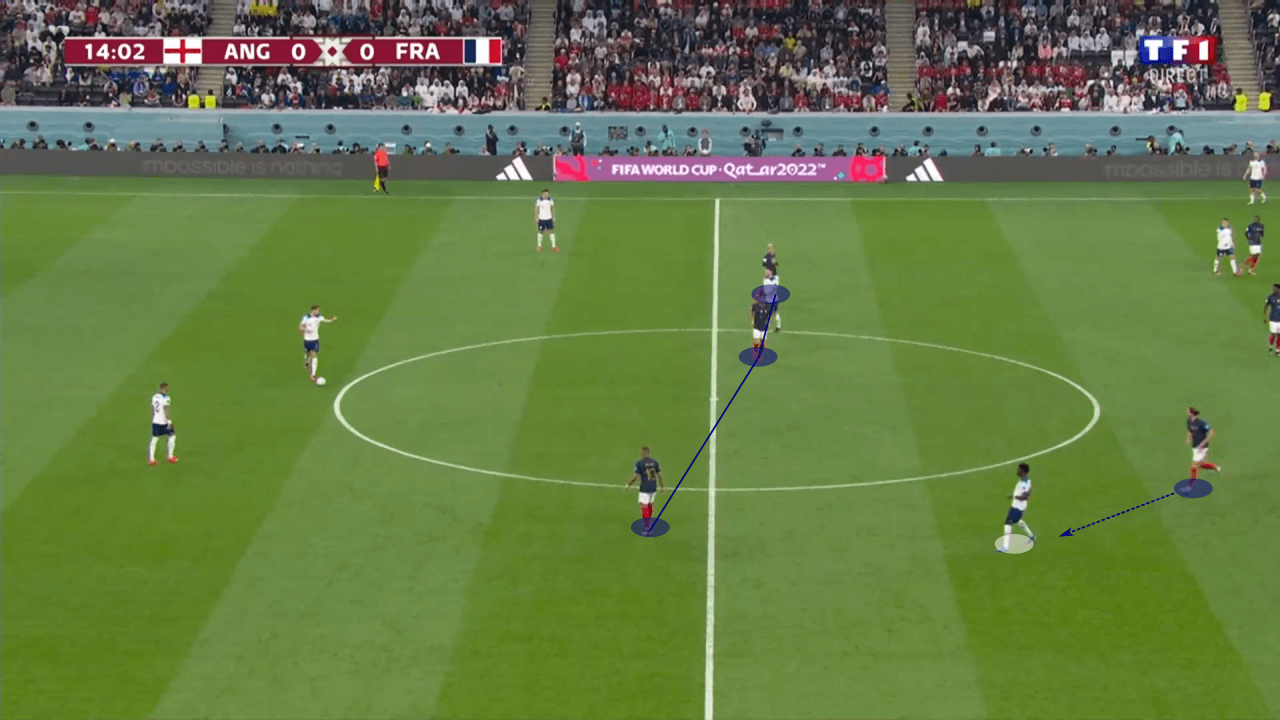 England’s pass map in this match provides a further look at their cautious approach and its consequences. As mentioned above, there is very little activity in the central lanes, especially in the opposition’s half. While the wide channels are busier, as you begin to progress into the opposition’s half, this significantly declines. Despite dominating possession, their cautious approach to it saw them struggling to progress with success. 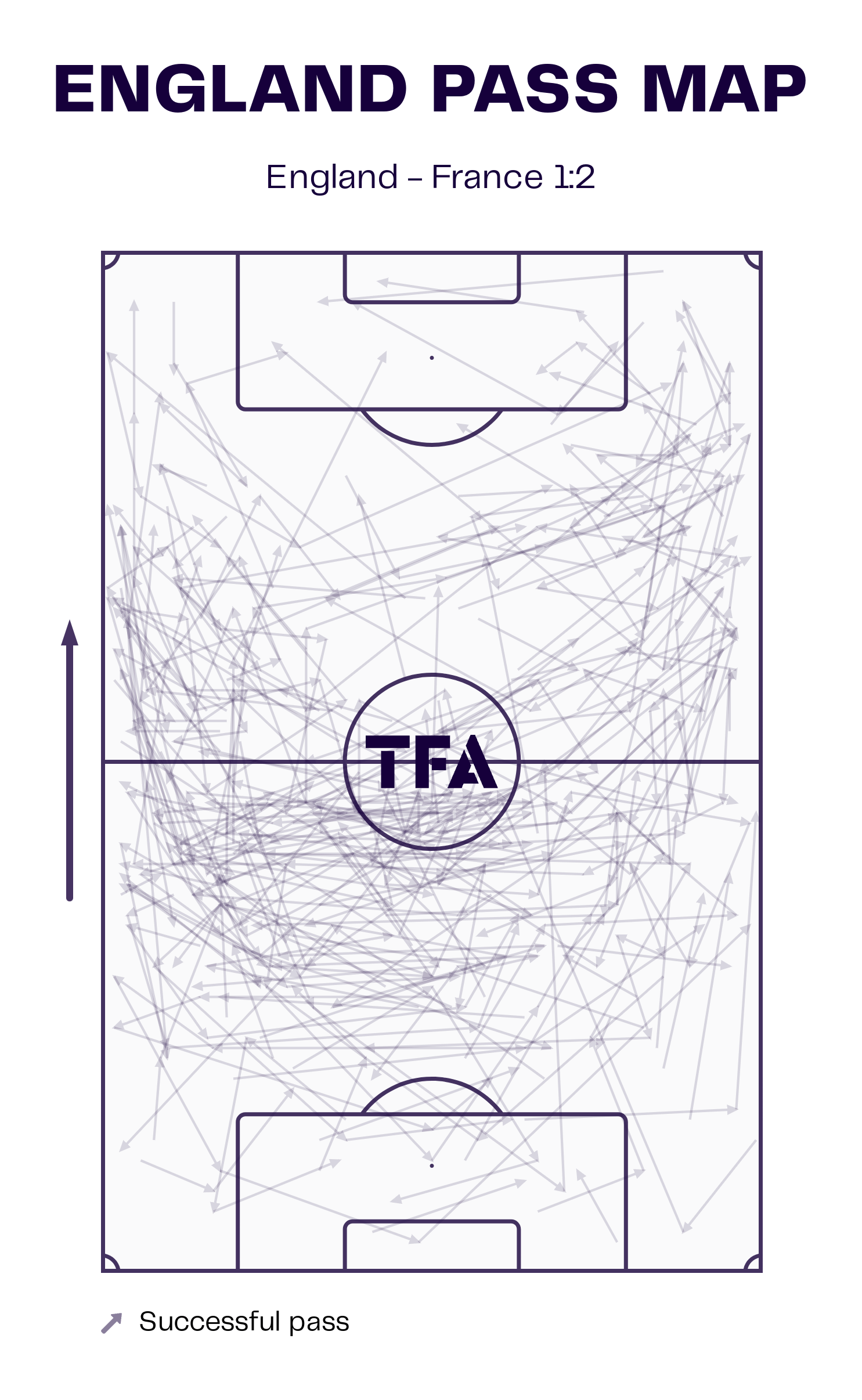 While England’s match was characterised by volume and inefficiency, France was the opposite. Deschamps’ side only enjoyed 41.18% possession, and they were able to create 1.2 xG. They were able to rely on the clinical ability and individual talent of their star players, which in addition to an organised defensive system, proved extremely successful.

With 36-year-old Giroud leading the attack, France were not looking to press high. Their average PPDA finished at 25.36, only getting as low as 11.7 towards the end of the first half. Their defensive territory in the match can be seen below, highlighting their lower block. In addition to remaining compact and keeping England from progressing, this low block also allowed France to soak up pressure and launch dangerous transitions. 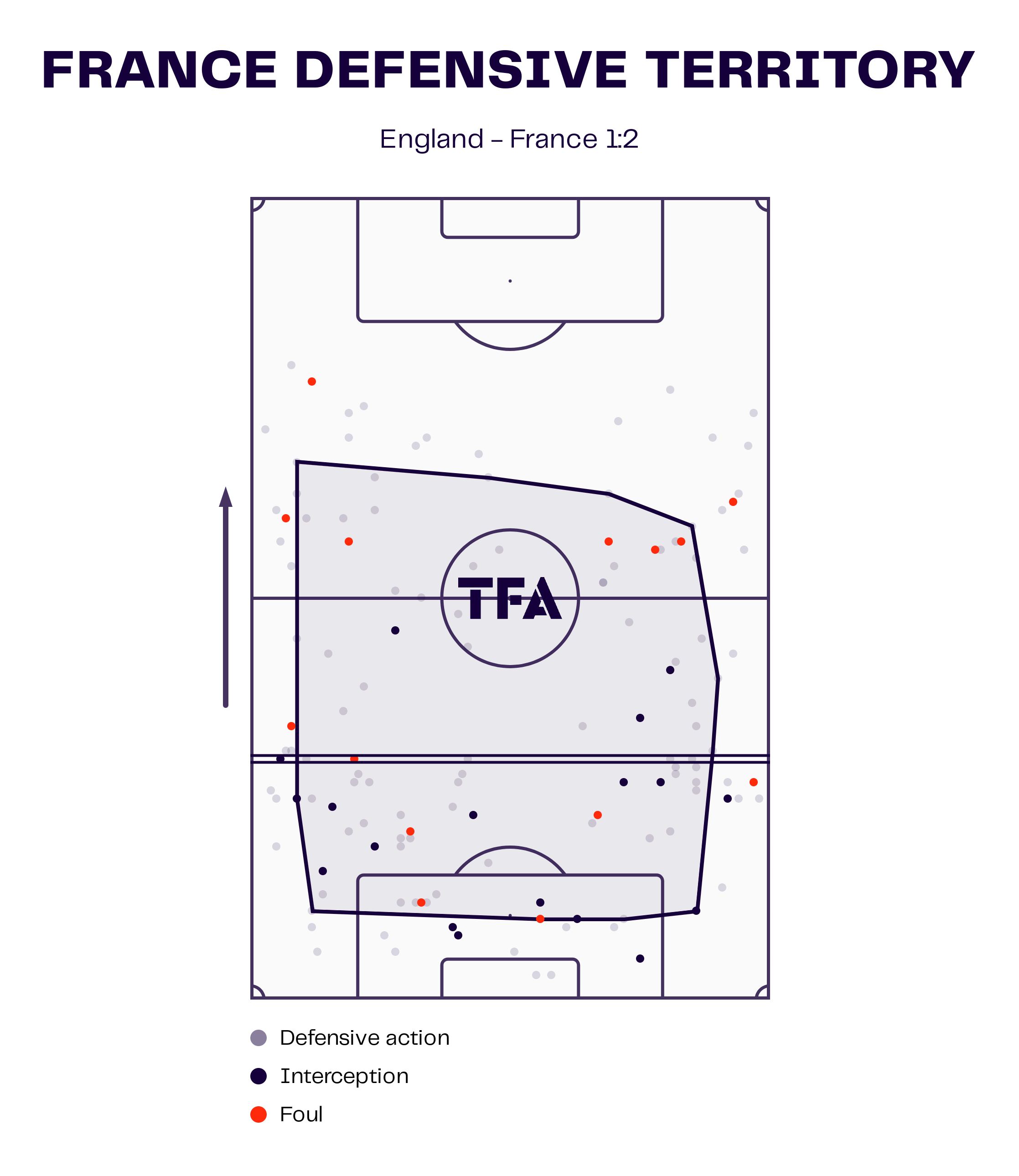 In this mid-to-low block, Deschamps’ men had preassigned roles. Giroud and Griezmann were in charge of limiting Declan Rice’s involvement in possession. Behind them, Tchouaméni picked the more dangerous Bellingham, and Rabiot marked Henderson. 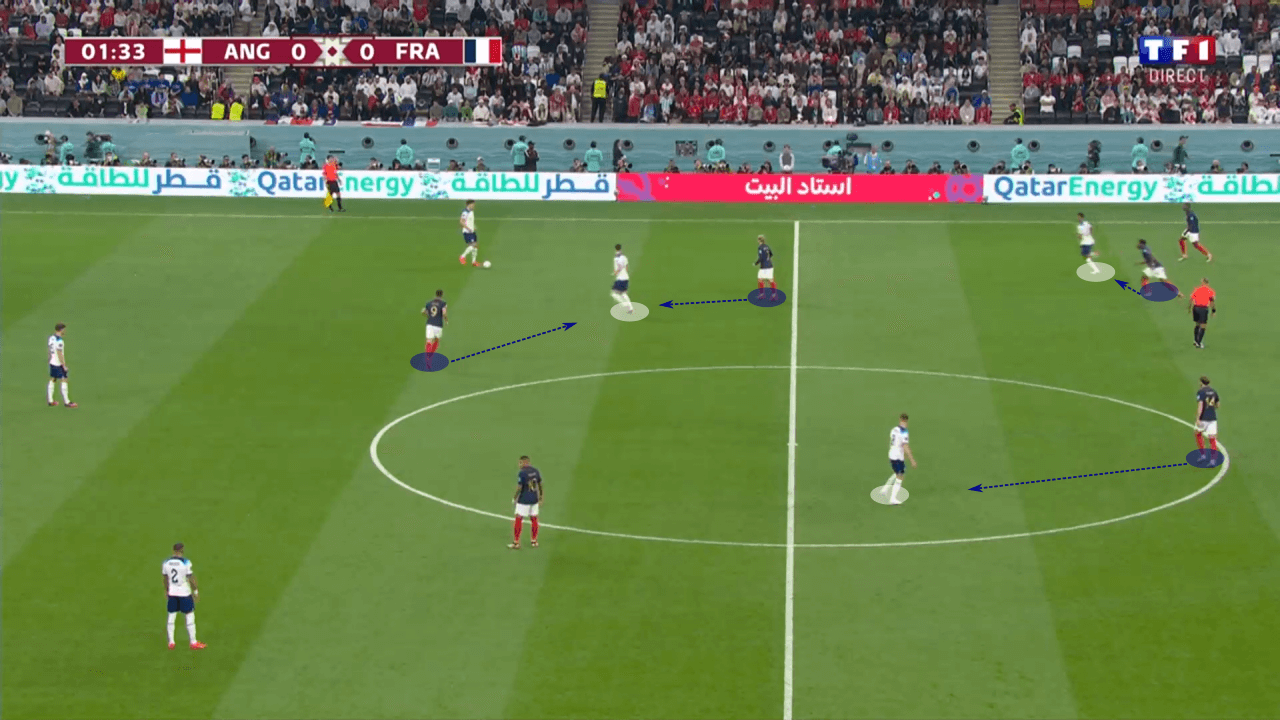 As England’s possession was on the more cautious side, France were quite successful in limiting their progression. Similar to their defensive strategy, their attacking approach was also extremely effective.

Building out of the back, they looked to lure England in before launching more vertical attacks, which suited the characteristics of their players. In the instance below, they switch to the left side after attracting England’s entire defensive block over to the right. 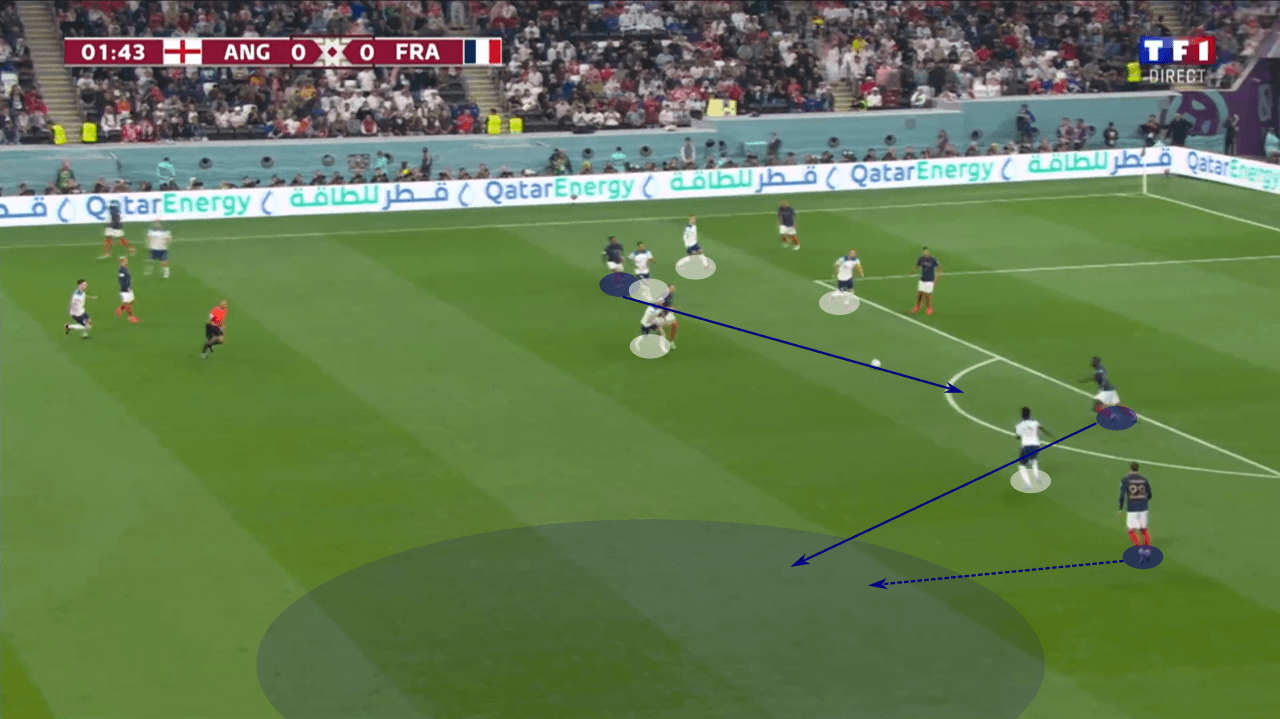 This overall direct style of possession proved very effective, but their first goal came from an attacking transition. In the rare instance that Kyle Walker pushed into the final third, France took full advantage of it. After Upamecano recovers the ball from Saka, he bursts into the space left by Walker and begins the counter-attack. 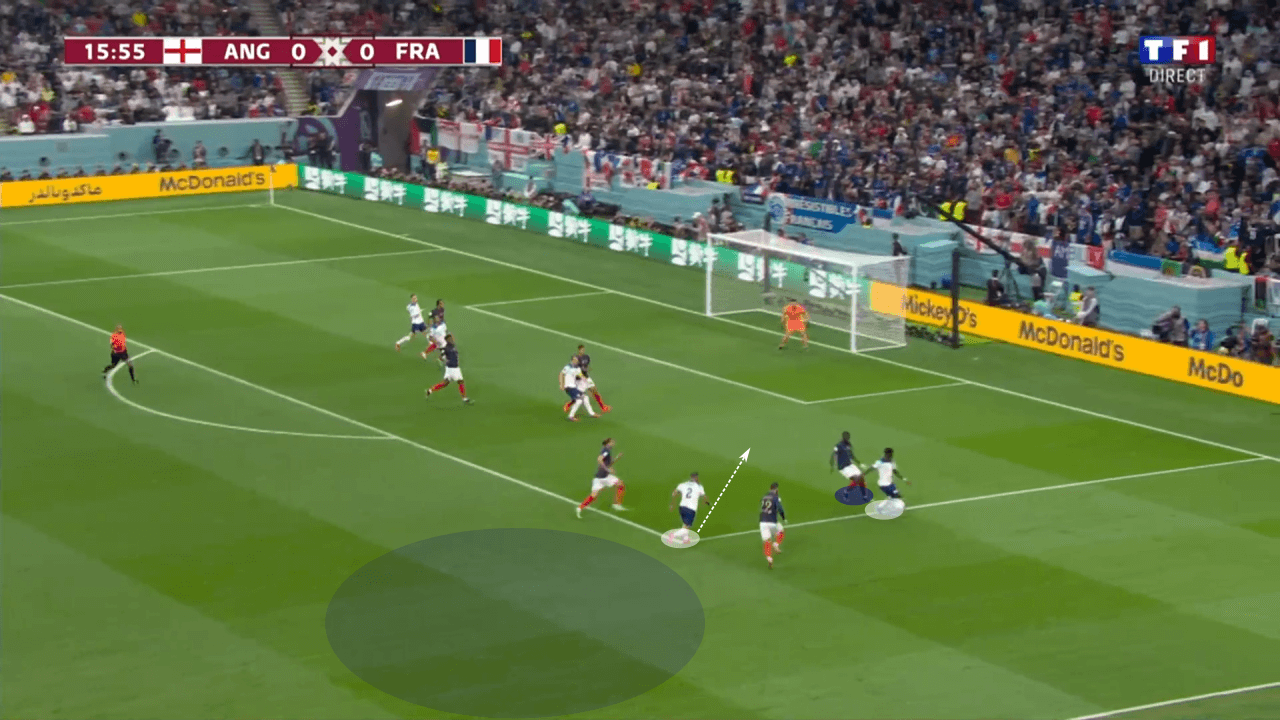 As France reach the final third, England recover the majority of their players. However, there is a collective mistake from England as they put eight players inside their own box without anyone on Griezmann or Tchouaméni, who went on to score the first goal. 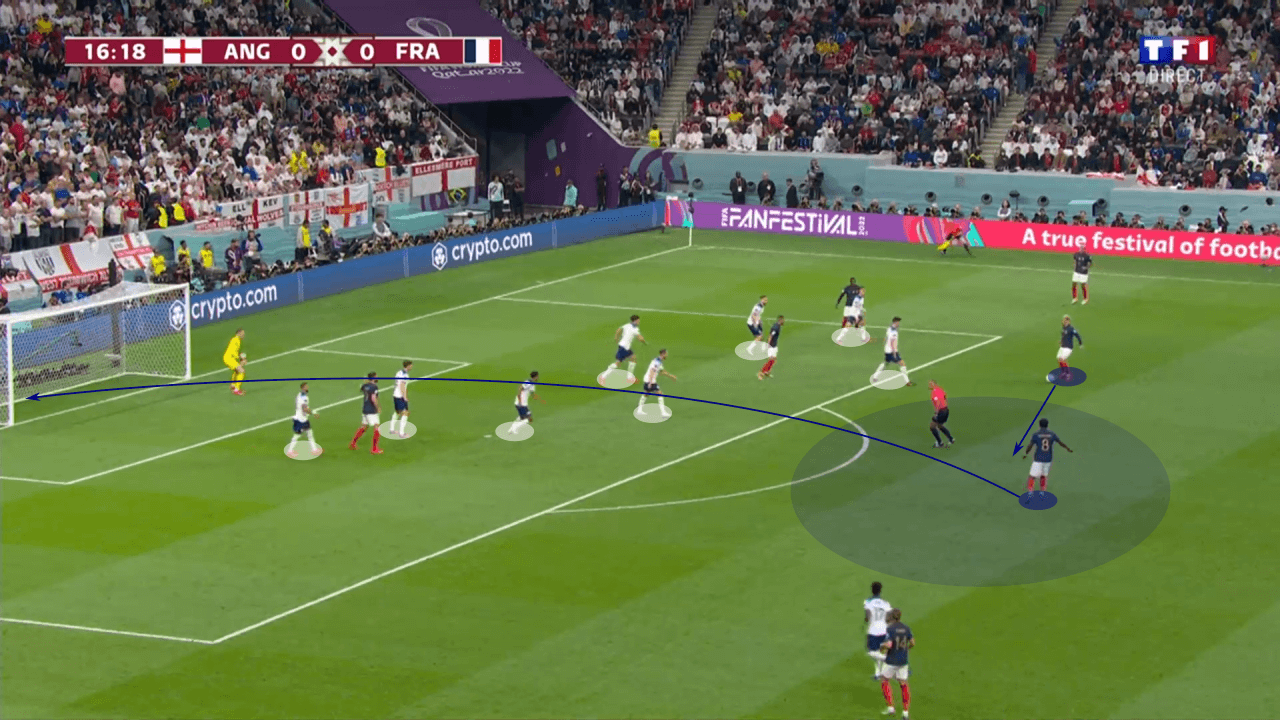 With his strategy, Deschamps put his chips on the precision of his stars. In a more vertical style, France were looking to progress quickly through the thirds. Unsurprisingly, their attacking transition was as lethal as ever. France certainly did enough to win, but England did offer a few answers.

As the second half progressed, England started finding some answers to the game. Shortly after halftime, they found the equaliser through Kane’s penalty. Even after France went back up 2-1, Southgate’s men kept knocking on the door. At the heart of this fight was Bukayo Saka. The Arsenal forward played a significant role in helping England progress and create in the second half.

The first major shift was his movement inside. As Henderson moved wide, Saka began floating through the middle, looking to find space and disorganise the defensive structure with his dribbling. In the instance below, Rabiot is confused as Saka replaces Henderson in the midfield. He is able to receive it from Stones before turning and driving at the French defence. 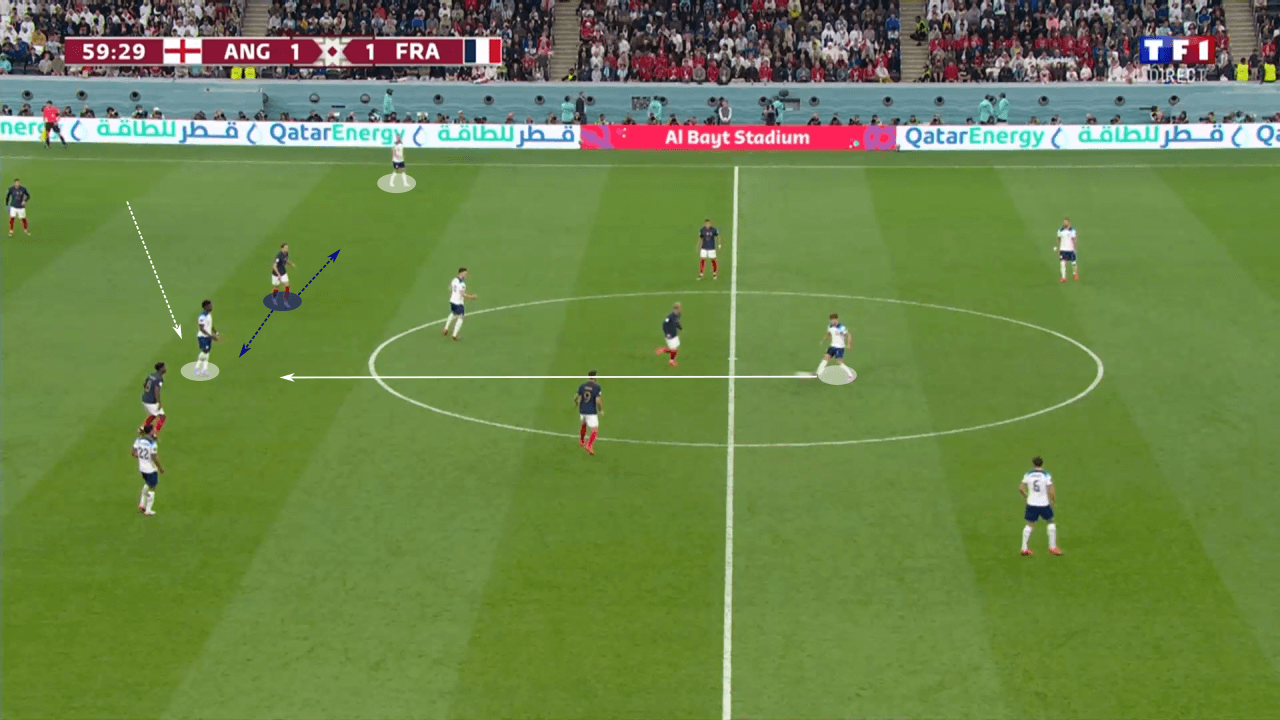 It is no surprise England’s first goal was created by the 21-year-old. After receiving it on the right wing, he drives at two French defenders. He squeezes a pass in between them to find Jude who immediately plays it back to him. Saka is then tackled by Tchouaméni and earns a penalty. His dribbling was one of England’s most dangerous resources as they struggled to break France down. 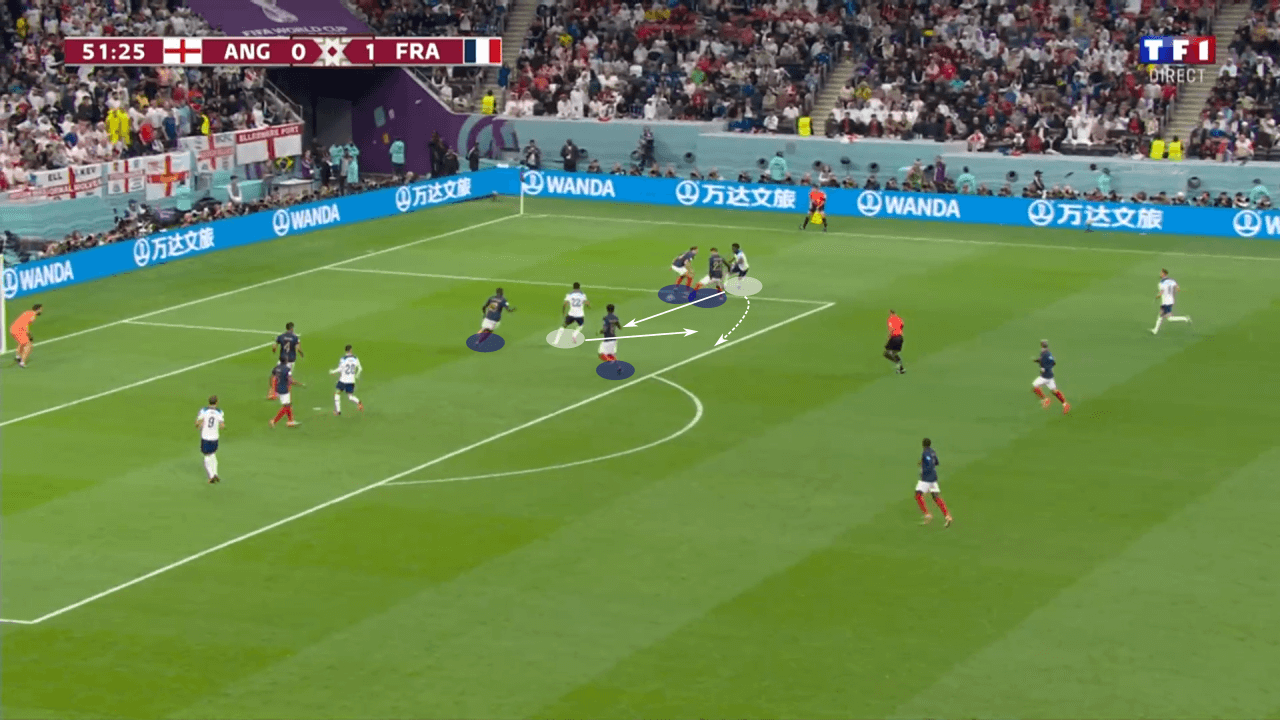 Another solution they found was through the centre-backs. France’s mid-to-low block consisted of the forwards sitting on England’s defensive midfielder. In this scenario, the centre-backs were often left with time and space on the ball. In the second half, they began exploiting this by performing progressive carries into the opposition’s half. As seen below, Maguire performed them quite often. 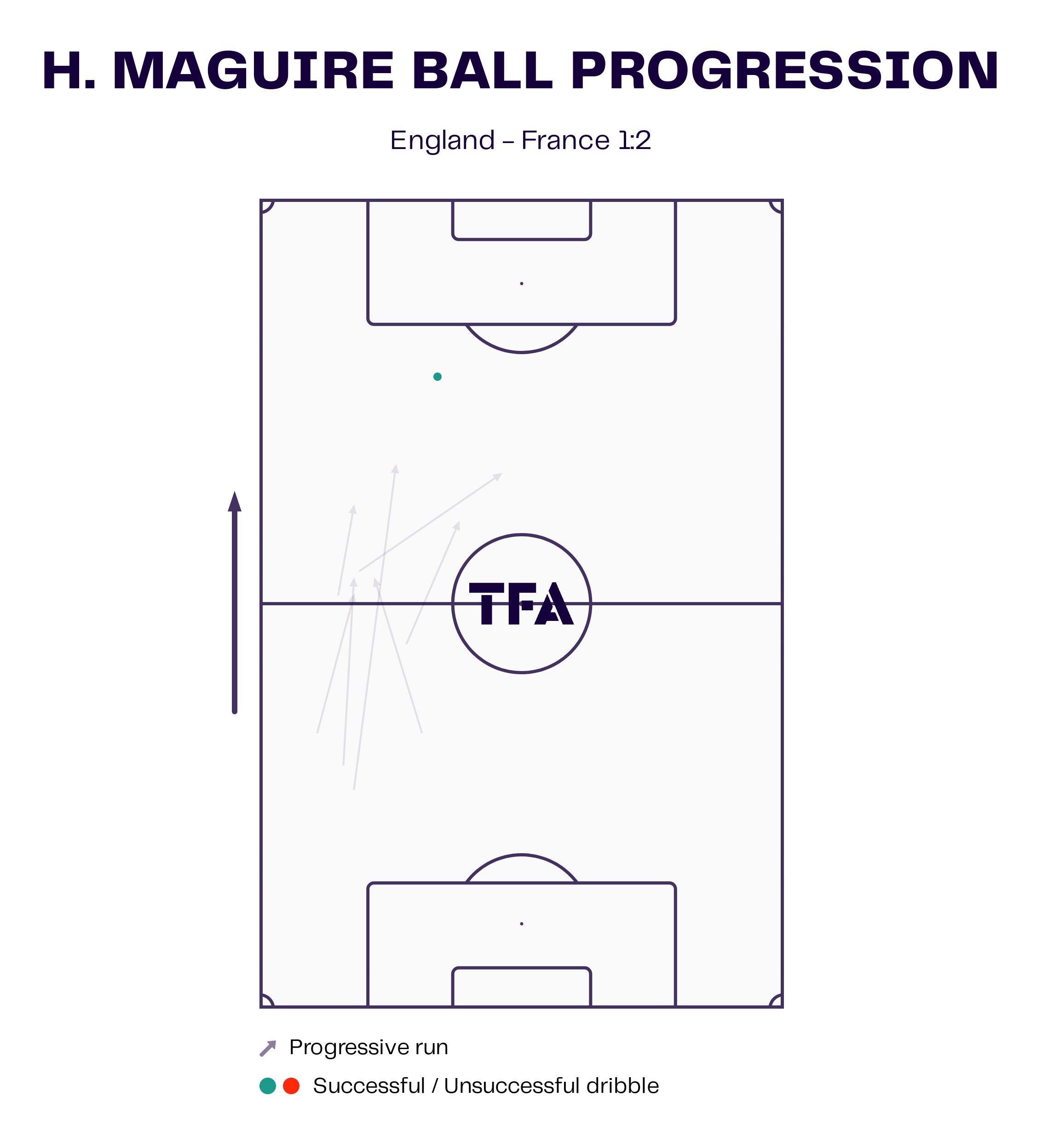 In the instance below, he uses this resource to progress all the way into the final third. As Griezmann closes off Declan Rice and Dembélé sits on Luke Shaw, Maguire has time and space to explore. 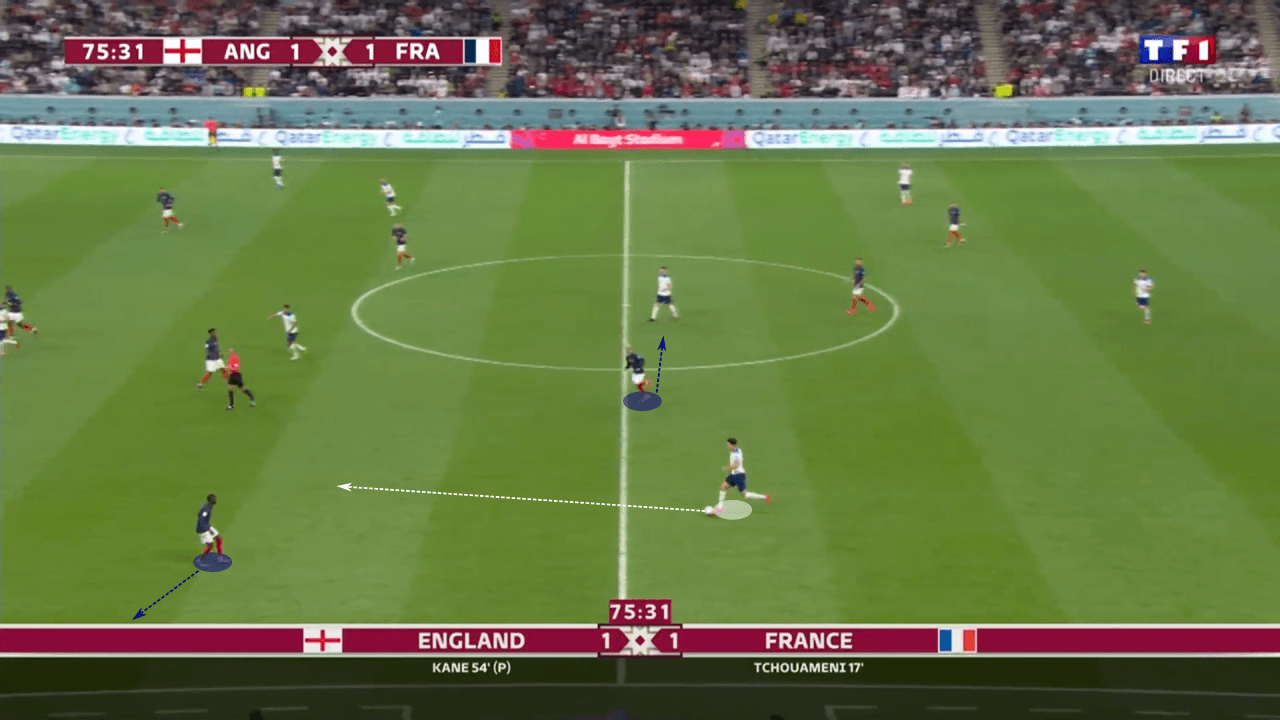 Stones began using the same strategy to progress into France’s half. England’s positional attack meant the French defenders were rather pinned, and as the plus-one attacker, the centre-backs began driving inside France’s defence in order to disrupt their organisation. 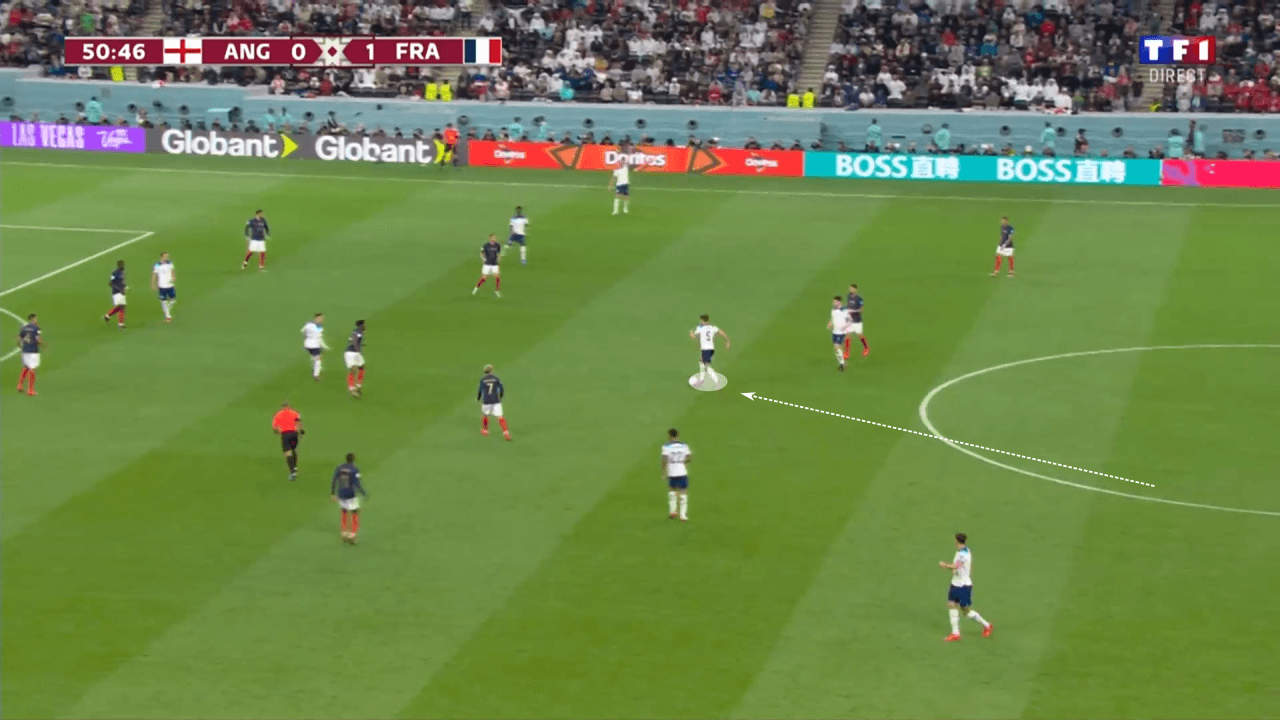 At the end of the day, the simple threat of Kylian Mbappé was enough to disrupt England’s phenomenal form in the FIFA World Cup. Gareth Southgate entered the match with a much more cautious approach, especially in possession. This extremely limited their ability to progress and create, and although they found some solutions later on, they struggled to capitalise on them. On the other hand, France were unforgiving and lethal with their strategy.

After a fascinating tactical battle, England are officially out of the FIFA World Cup. France will go on to face Morocco, who have eliminated Spain and Portugal. The dynamics of that match will be entirely different for France, so it will be interesting to see how they perform. 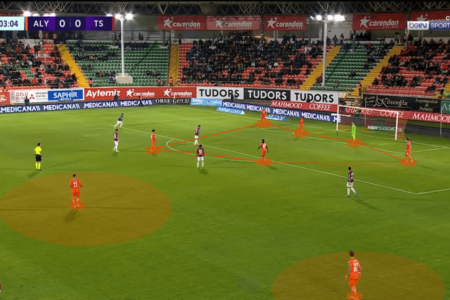