Morocco achieved way more than what was expected from them in this tournament and they can continue to dream even bigger as they will meet France in the semi-finals after the latter beat England after an entertaining match as well. It will be very interesting to see how Morocco will deal with a team like France and whether they will use the same tactics that allowed them to win against Belgium, Spain and Portugal or they will adopt a different strategy to cope with France’s threats and powerful players –  especially on their left flank where there are players like Theo Hernandez and Kylian Mbappé. But before thinking about the semi-finals, let’s delve into Morocco vs Portugal and explore what happened between the two teams from a tactical perspective in this tactical analysis article.

The analysis will look at both teams’ performances with a focus on how Morocco were more efficient than Portugal in defending and attacking, without forgetting to identify Morocco’s possible improvements in attack. And although the score tells us that Morocco were better in attack, we will also explore how Portugal could have been way more clinical as they created numerous goalscoring chances during this match.

Walid Regragui started the match according to the 4-1-4-1 system, which repeatedly turned into a 4-3-3 in attack and a 4-1-4-1/ 4-5-1 in defence. Sevilla’s Yassine Bounou played in goal and the back four in front of him was composed of PSG’s and former Real Madrid and Inter’s Achraf Hakimi, Jawad El Yamiq, Romain Saiss and Yahia Attiyat Allah. Fiorentina’s Sofyan Amrabat, Azzedine Ounahi and Selim Amallah formed the midfield trio while Hakim Ziyech and Sofiane Boufal started the match as wingers. Plus, the team’s sole striker was Youssef En-Nesyri.

On the other side, Portugal preferred to start the game using a 4-2-3-1 formation with Digoo Costa in goal, Diogo Dalot as RB, Pepe and Ruben Días as centre-backs and Raphael Guerreiro chosen as LB. The midfield was made up of Otavio and Rúben Neves and in front of them, Bernardo Silva was the advanced playmaker, Bruno Fernandes and João Félix played on both wings while Gonçalo Ramos, the replacement for Cristiano Ronaldo, was the team’s striker. In fact, it was strange for Fernando Santos to not include dangerous and clinical attacking players like Ronaldo and especially Milan’s Rafael Leão from the beginning of the match, knowing that the two players can be extremely useful both in playmaking and goalscoring. It is understandable though to keep Ronaldo fresh for the second half and not use him for the whole match, however, it is not really a convincing choice to keep a player like Leão on the bench for most parts of the match and not exploit his excellent abilities. 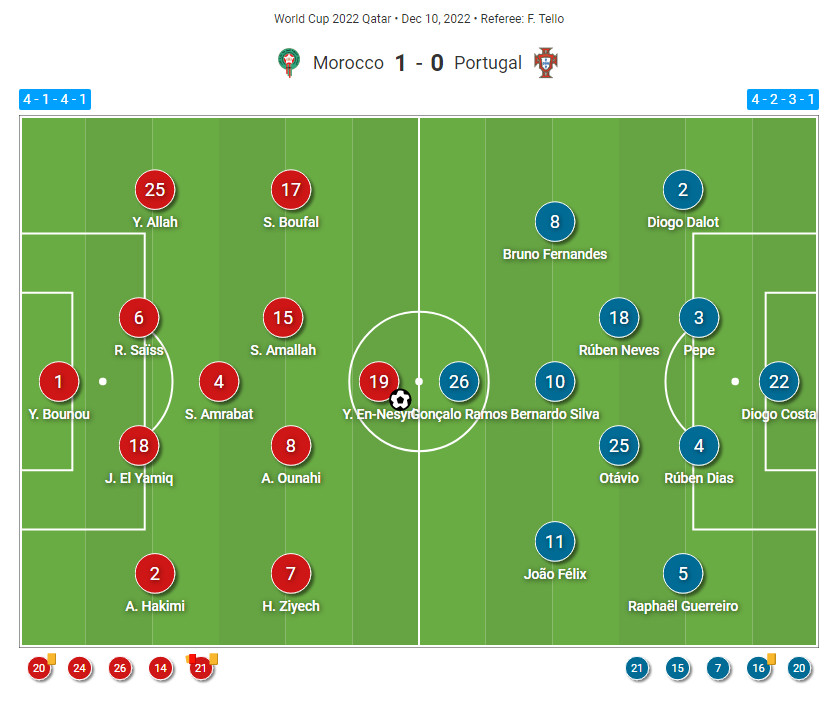 Just like against Belgium and Spain, Morocco adopted almost the same plans and systems when defending and when attacking. The team was continuously compact at the back and prevented most of Portugal’s penetrations and key passes thanks to their two solid lines of defence and to Amrabat who usually stands between those two lines and makes crucial interceptions. In order to avoid Portugal’s counter-attacking threats, Morocco ensured that their defensive block remained low in order to absorb Portugal’s attempts, contain them and avoid one vs one situations. This did not stop Portugal’s attacks for sure but it limited their threats and obliged them to resort to shots from distance or to crosses from the wings rather than trying to penetrate through the box. It is true that Portugal had numerous dangerous shooting opportunities that could have been scored, yet, Morocco’s strategy remains successful since it helped prevent Portugal from scoring. The following graphic shows how Morocco defended inside their own half for most of the match and made most of the interceptions inside the final third. At the same time, it was intelligent from Morocco to avoid committing fouls in dangerous areas of the pitch as they only committed one foul near the box and it was way too angled for a direct shot. 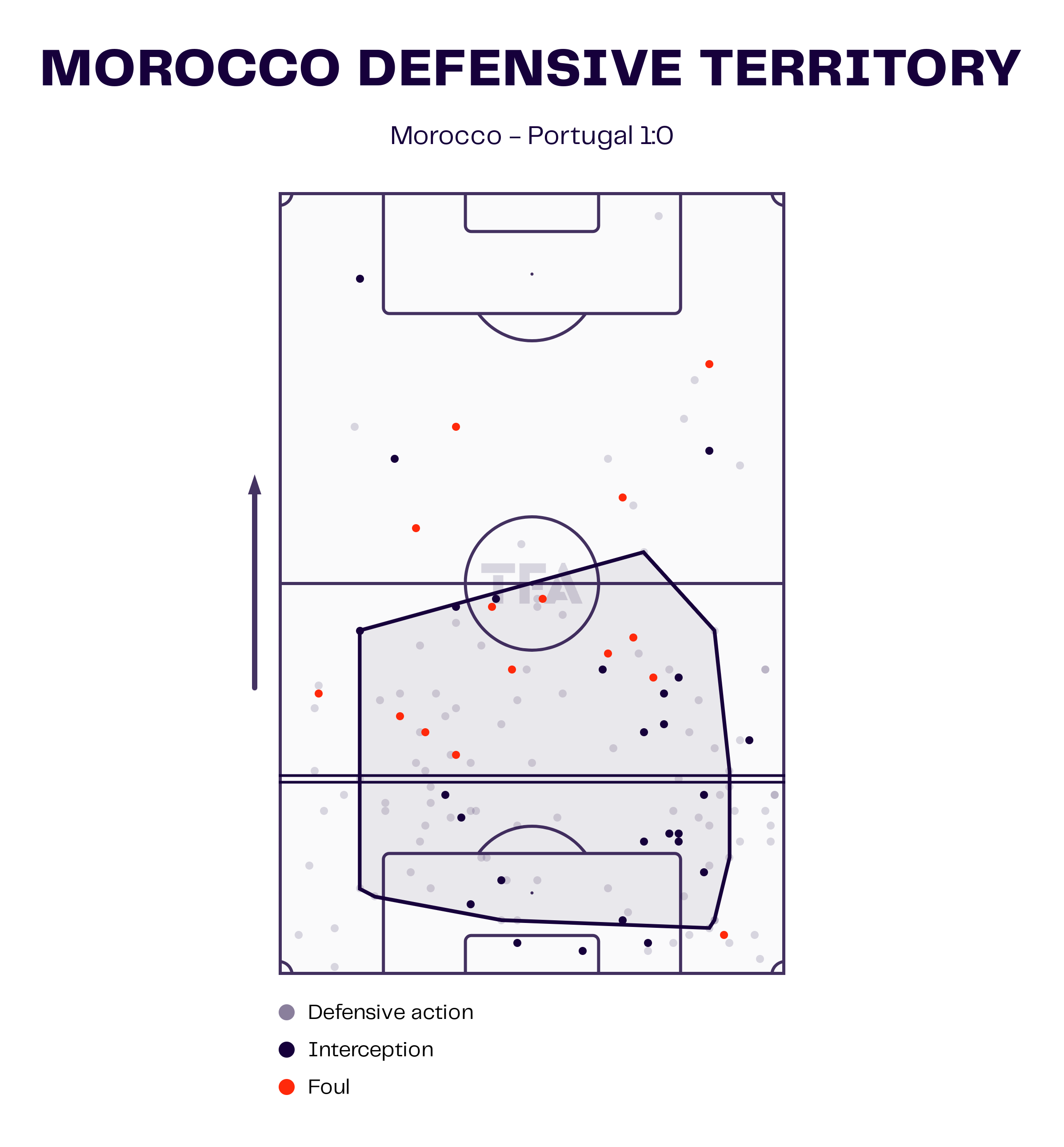 Morocco won 51,79% of the duels and made 61 interceptions against 21 interceptions from Portugal. At the same time, they had 28,04% in terms of possession against 71,96% for Portugal, and this highlights the fact that having more possession doesn’t necessarily mean winning games. Morocco had minimal possession time but they were able to score and defend well to secure their advantage. This playing style worked well for Morocco in most of their World Cup games so far as they rely so much on their defensive compactness and on the importance of keeping a clean sheet.

This being said, Morocco risked conceding goals on more than one occasion. Defending set-pieces was one of Morocco’s defensive weaknesses during this match and if not for Portugal’s misses, they would have been punished with one goal or two. In the following example, Moroccan defenders failed to mark Félix well and allowed him to put the impact he wanted on the ball during this free-kick. Failing to mark players during such dangerous set-pieces will eventually punish Morocco against players who can be more clinical than Félix, such as Olivier Giroud for example, who will be Morocco’s next big opponent. Therefore, the team will need to improve the way they defend set pieces ahead of their semi-finals game. 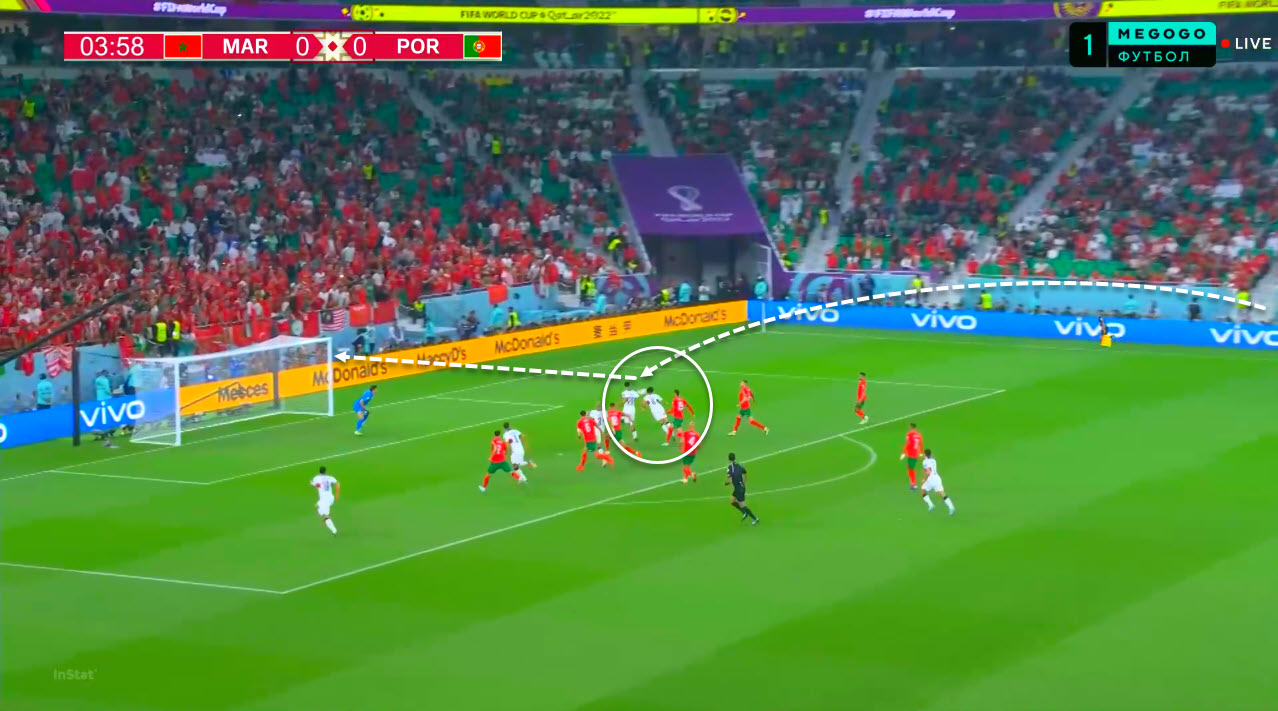 From an attacking perspective, Morocco were able to score a goal and create numerous dangerous counterattacking opportunities despite not having a lot of possession. In reality, Morocco could have scored two or more goals in this match as they had some clear goalscoring opportunities. But before looking at their missed opportunities, it should be said that the single goal of the match came from the right-wing thanks to a great assist from Attiyat Allah and an outstanding jump and header from the striker En-Nesyri. It is true that goalkeeper Digoo Costa mistimed his saving attempt and was not successful in his intervention attempt, but the credit goes especially to En-Nesyri for the jump and the header.

Moroccan players’ great technique and quick passing abilities helped them avoid Portugal’s pressing and build-up from the back in an excellent way. They focus their passes on one flank before switching to the other flank quickly in order to create numerical superiority and that plan worked for them on most occasions. Attiyat Allah was not only excellent in terms of playmaking but he also found himself in a very suitable scoring situation following a great Moroccan counterattack. However, he missed this chance in a strange way despite having the time and space to shoot with accuracy. 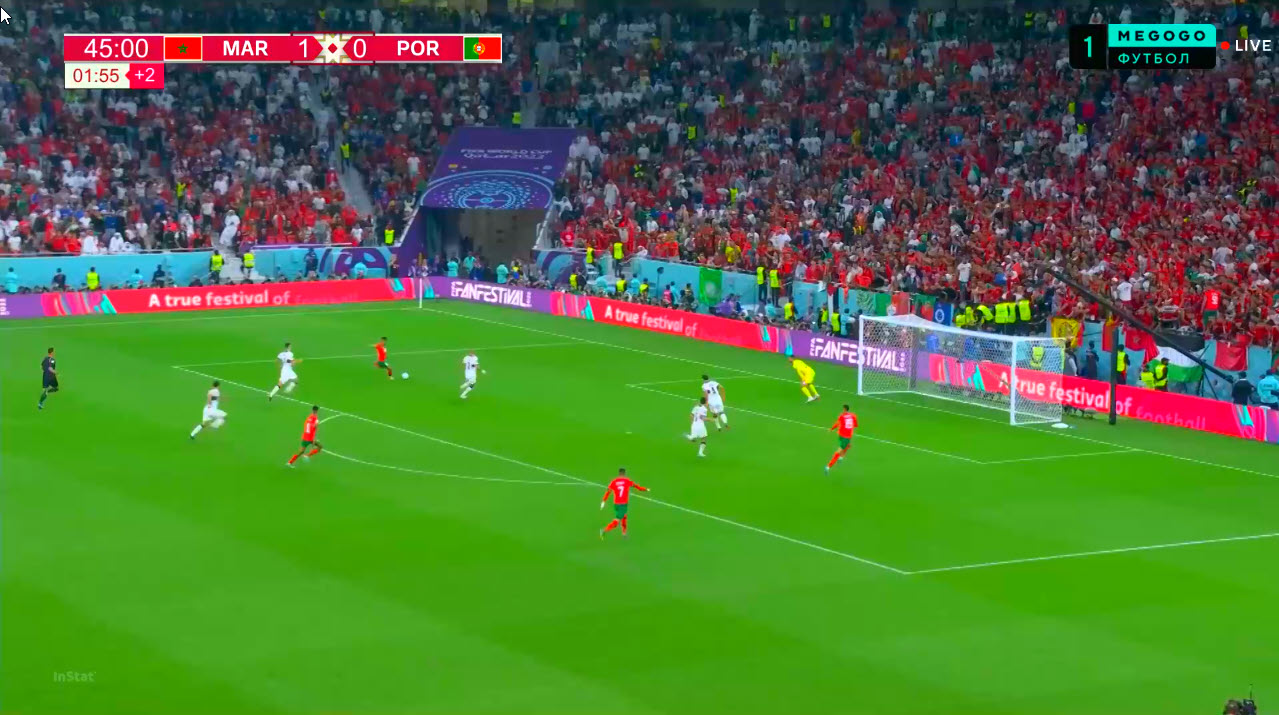 During the second half, Morocco retreated even further and preferred to keep defending and protecting their lead while trying to exploit counterattacks. They conceded numerous Portuguese chances but at the same time, they were very close to scoring their second goal. For instance, the following chance could have been dealt with in a better way as it was one of the match’s best chances. Attiyat Allah knew how to clear the ball from defence but what made the difference for Morocco is that their players rarely clear the ball without thinking. They always aim at providing the ball to a teammate even when they are very pressed or when obliged to clear the ball. Attiyat Allah cleared the ball towards Zakaria Aboukhlal in this situation but the latter failed to do what was necessary. He aimed at chipping the ball but didn’t execute the action with the needed precision and therefore gave the ball to Diogo Costa easily instead of shooting with power, dribbling past him or exploiting the opportunity in a more efficient way.

Portugal didn’t play badly at all during this game. They shot nine times with three being on target as they had 71,96% of possession. However, what was lacking in Portugal’s performance was finishing. In this regard, not relying on players like Ronaldo and Leão who are known for being excellent finishers was an error from Fernando Santos as those who replaced them did not provide the same finishing quality in this match. Moreover, it must be said that not giving confidence to these players surely impacts these players psychologically and makes them perform in a less confident way and that was clear in Leão’s performance when he was subbed during the second half. The difference between the player’s impact at Milan and with Portugal was clear in this match since he was not given the same level of confidence or motivation he was given by Stefano Pioli. Despite these factors, players like Fernandes and Silva should have been more clinical in this match as they are the ones with the most experience on the field from Portugal. The following picture shows a very powerful Fernandes shot that almost hit the crossbar and was surely going to be a goal if it was a few centimetres lower. 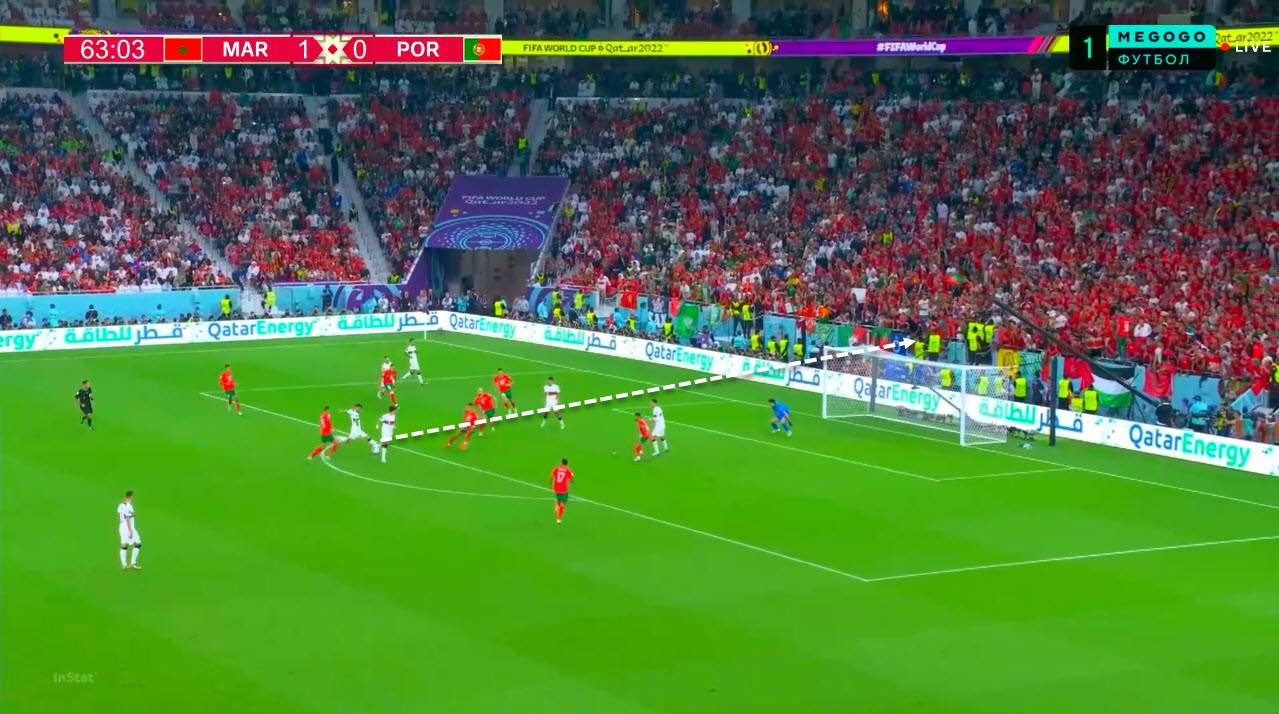 Portugal relied on set-pieces, crosses from both wings and shots from distance as these were the only weapons possible against Morocco’s organised defence. They were able to shoot several times from distance and Bounou saved his team from some clear goalscoring chances such as Félix’s shot in the 82nd minute and Fernandes’ unlucky great shot from a closed angle which hit the crossbar and went out, as you can see below. 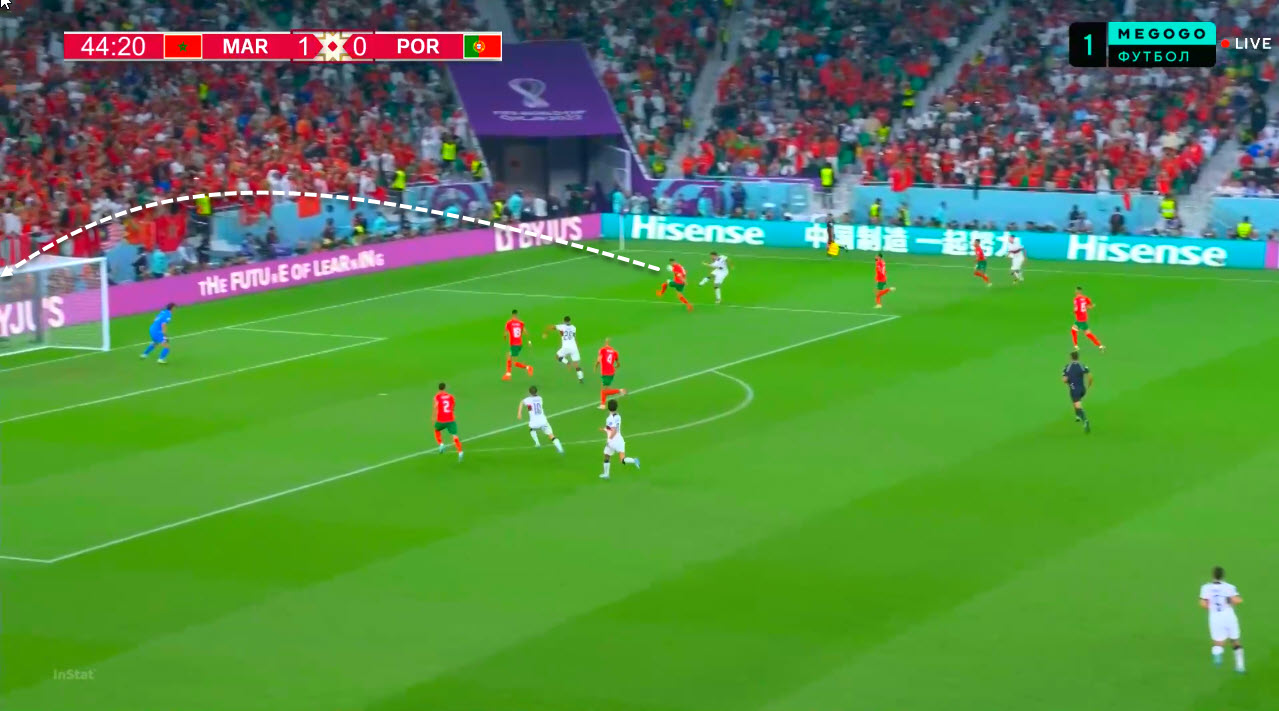 Portugal did everything to get back in the game especially after the substitutions made by Santos. But they failed to concretise their chances and weren’t lucky enough on some of the occasions. At the same time, they paid the price for their defensive mistakes as they could have conceded more than one goal after they attacked with numbers and played with a high defensive line in an attempt to press on Morocco and score the equaliser.

Morocco succeeded in making an unprecedented achievement by knocking Portugal out of the tournament and advancing to the semi-finals for the first time ever. Nevertheless, they shouldn’t get ahead of themselves at the moment and they will have to prepare very well for the difficult France encounter since it will surely not be easier than the quarter-finals.

On the other hand, Portugal will have to identify their mistakes and work harder to do better in the upcoming tournaments knowing that they currently have some of the best players in almost every position. Their objective should be to exploit the abilities of the players they have in the best possible ways and make the adequate player choices in order to be more dangerous and efficient in the future.