Italy Women faced Lithuania Women for the FIFA Women’s World Cup 2023 Qualifiers last week and the game ended with a heavy 7-0 loss for the relatively young Lithuanian side. Italy knew how to find their way to their goal seven times along with numerous other missed chances, exploiting the lack of experience of their opponent.

In fact, winning this match was fundamental for the Azzurre in their course for the qualification from the group stage without resorting to playing the play-offs. However, since they previously lost to Switzerland who are with them in Group G, in addition to Romania, Croatia, Moldova, Italy were obliged to beat Switzerland when they face them in Switzerland in order to occupy the first spot.

Moreover, failing to win against Lithuania or even in the following two games that will take place after facing Switzerland will mean that Italy would put their qualification from the group stage at risk. Therefore, both Italy and Switzerland will be battling for a single qualifying spot until the end of this group stage journey.

In this tactical analysis article, the focus will mainly be on Italy’s tactics, weaknesses and strengths ahead of their crucial encounter against Switzerland. The article will explore what went well for the Azzurre and what they still need to improve in order to be more efficient both from a defensive and an attacking perspective.

Milena Bertolini preferred to start the match with a 4-1-4-1 formation that transforms to a 4-3-3 formation during the game using plenty of Serie A Women players. The line-up was composed of Milan’s Laura Giuliani as a goalkeeper, Valentina Bergamaschi, former PSG’s Sara Gama, Elena Linari and Lisa Boattin in defence, Martina Rosucci, Manuela Giugliano and Juventus’ Arianna Caruso in midfield, both Barbara Bonansea and Valentina Cernoia on the wings to support the striker Cristiana Girelli.

On the other side, Daniel Wimmer opted for a 4-4-1-1 rather defensive formation relying on Greta Lukjančukė as a goalkeeper, Greta Guižauskaitė, Monika Piesliakaitė, Milda Liužinaitė and Lolita Žižytė in defence, Algimantė Mikutaitė and Liucija Vaitukaitytė as central midfielders, both Paulina Sarkanaitė and Loreta Rogačiova on the wings on the same line with Judita Sabatauskaitė who played as an advanced playmaker and had the mission of supporting the team’s striker, Ugnė Lazdauskaitė. 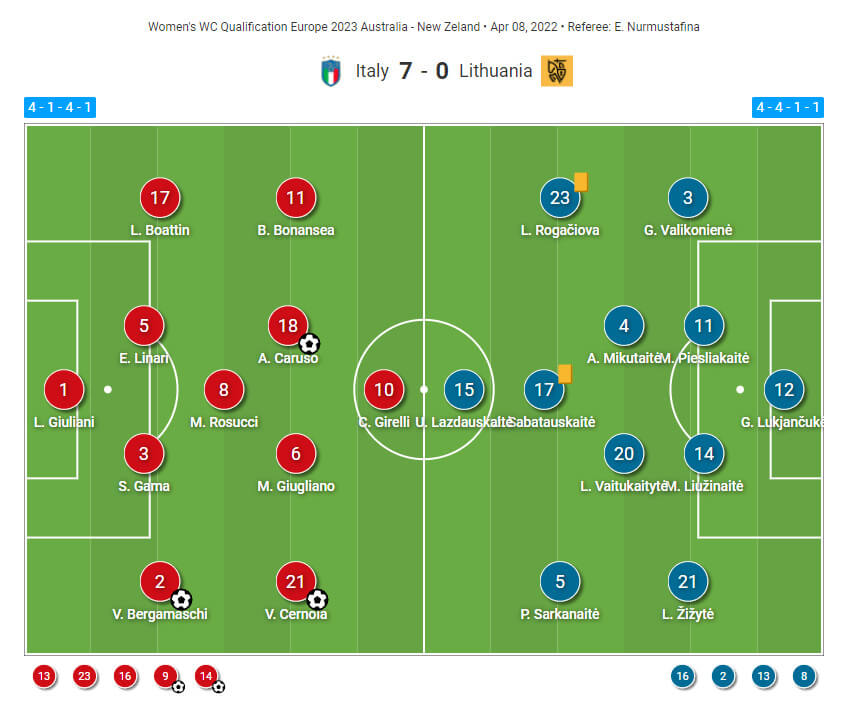 The Azzurre’s goals and strengths

Italy started this match with the intention of scoring the highest possible number of goals as early as possible, knowing that the goal difference can be crucial in deciding the winner of the group. And since they were aware of their abilities to surpass Lithuania’s defensive lines with ease given that they were able to do so in the away fixture, Italy didn’t lose time and were attacking almost throughout the whole game. The team scored their first goal at the second minute of the match following a quick combination of passes with single touches between three Italian players in a tight space, allowing Caruso to find herself alone in front of goal after excluding all Lithuanian defenders from the action.

As you can see below, Cernoia and Giuliano’s quick passing combination as well as Cernoia’s assist enabled Caruso to have time to decide about her shot and put it inside the net and were key to scoring this goal. 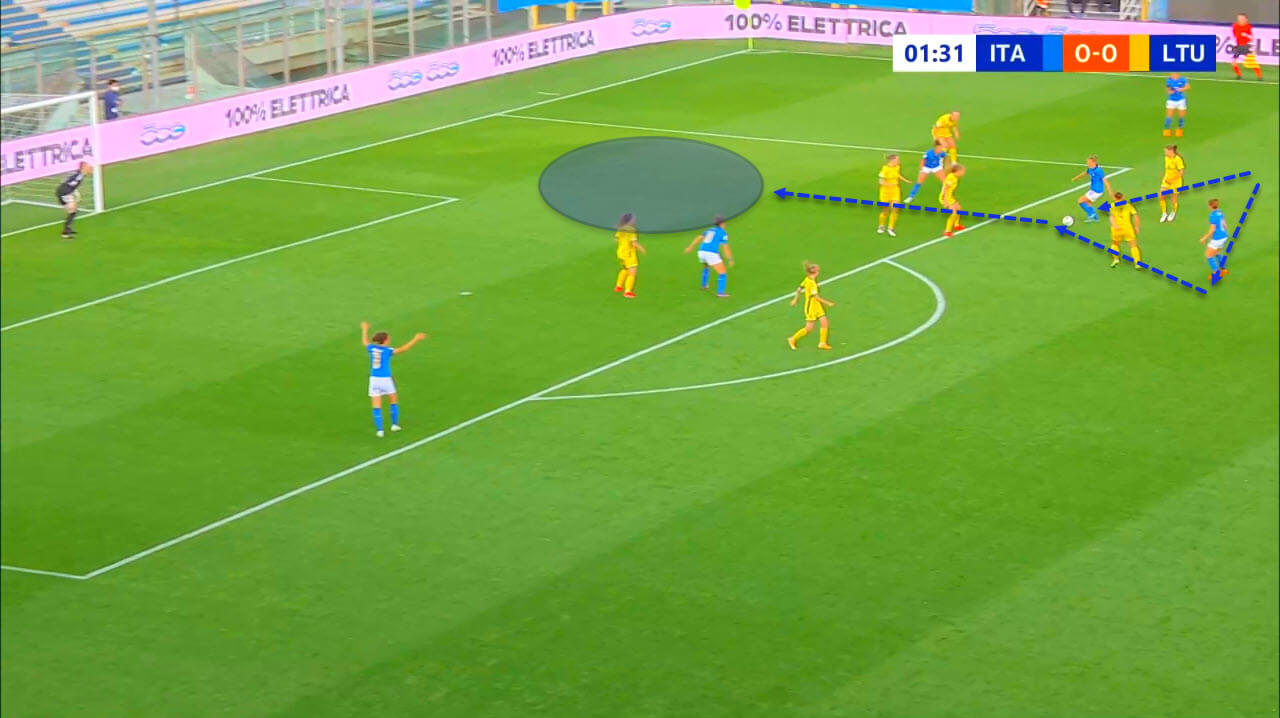 Italy relied a lot on Bergamaschi and Boattin’s attacking contribution as both players were actively present inside the final third and created a lot of problems to Lithuania’s defence. Moreover, Girelli, Bonansea and Cernoia’s constant movements and exchange of positions inside the final third confused their opponents and prevented them from having clear reference points when defending. Instead, they had to follow Girelli when she gets out of the box to receive passes, leaving plenty of space inside that area. In the second goal action, Cernoia exploited that space left by Girelli and her marker very well after the latter received a pass near the corner zone and gave a key pass to Cernoia. Then, Bergamaschi positioned herself well inside the box and acted like a striker despite coming from behind. Cernoia saw her movement and provided her with an assist for a well-played second goal. 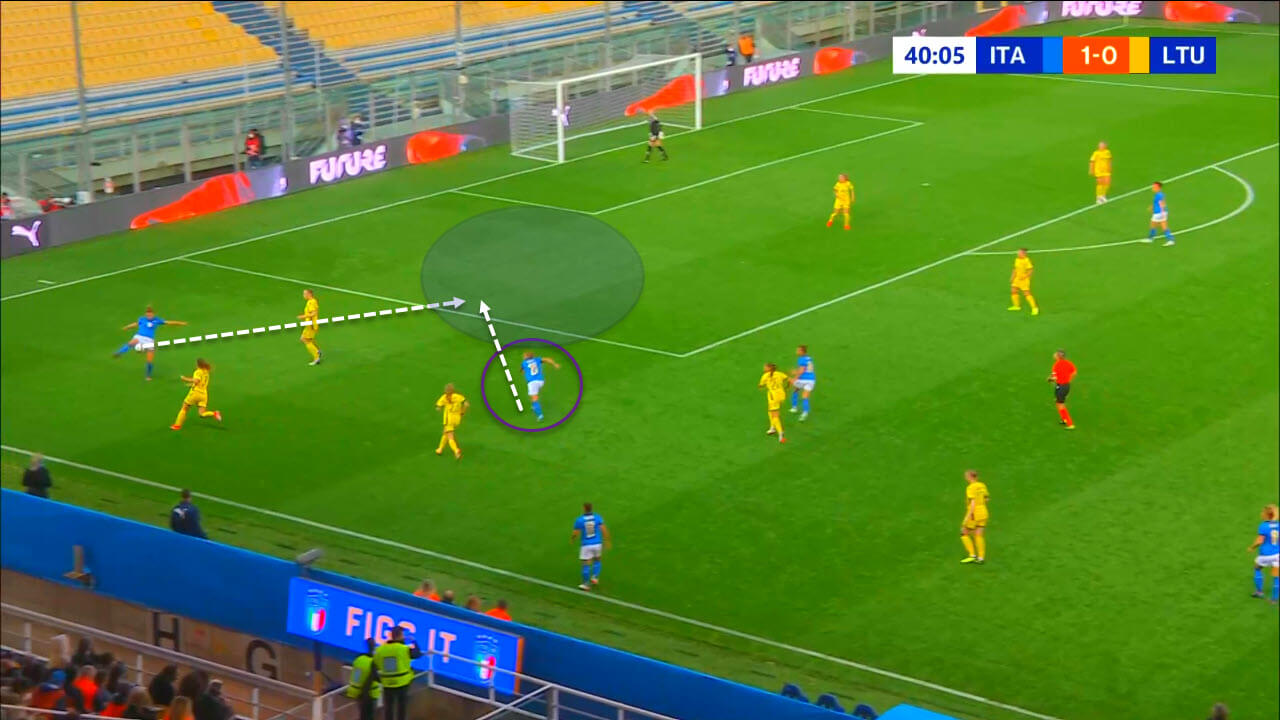 Cernoia was once again at the heart of the third goal action when she advanced from the left-wing and played a one-two passing combination with Girelli to free some space and be able to reach the box without being disturbed by Lithuanian defenders. Then, she gave a through pass to Bonansea who couldn’t catch the ball due to marking, but Caruso was there to finish the action successfully. 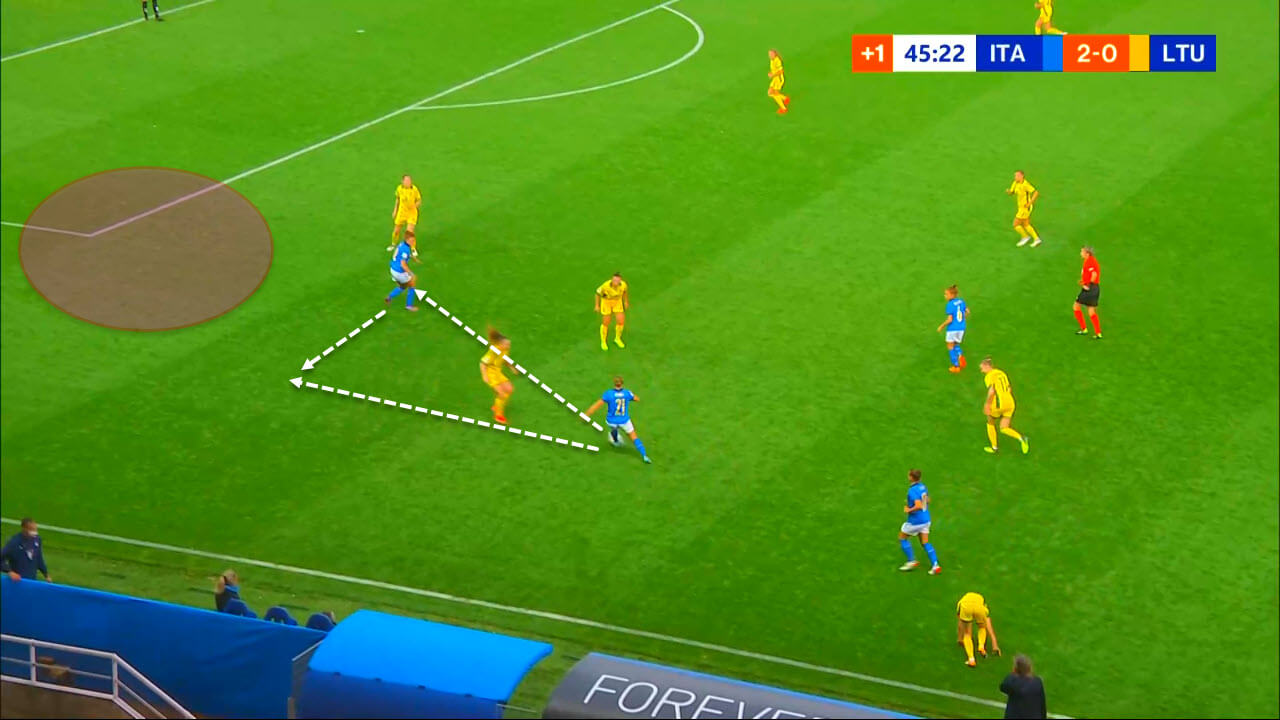 Italy knew how to exploit the space left behind Lithuania’s defence perfectly and the quick passing combinations were key to reaching the box in a more efficient and confusing way to their opponents. Italy’s passing accuracy in this match reached 83,97%, which proves the team’s constant concentration throughout the game and that’s what facilitated their mission and enabled them to score goals even in the last minutes of the match.

Moreover, the individual performances of Cernoia, Bonansea, Girelli, Bergamaschi and others were crucial from an attacking perspective. Cernoia was most probably the best player on the pitch as she was central to most goals and scored a beautiful direct free-kick at the 60th minute too. And then, players like Tatiana Bonetti and Daniela Sabatino made an instant impact as soon as they were subbed in by scoring two goals that consolidated the team’s leadership in terms of goal difference in the group. Keeping the players ready when on the bench and having some dangerous attacking weapons for occasions like these can be fundamental for Italy in their upcoming games especially when facing powerful teams.

Despite scoring a big number of goals, some aspects need to be addressed in Italy’s attacking performance because the team creates a lot but with minimal concretisation in front of goal. This means that Italy have finishing issues as they missed a lot of clear goalscoring chances. The team shot 43 times and only 19 of these shots were on target, which explains the urge to address this problem in order to not repeat such errors in the future. Working on improving the team’s level of concentration and training the attacking players on being more crucial in finishing the actions would be very beneficial for the Azzurre ahead of the fundamental encounters that they will have in this summer’s EURO 2022.

For instance, failing to direct this shot towards the needed angle and shooting the ball towards the hands of the goalkeeper was a big error from a striker like Girelli. The team can’t always get similar opportunities when facing the top European teams, but they get one, they have to exploit it perfectly. 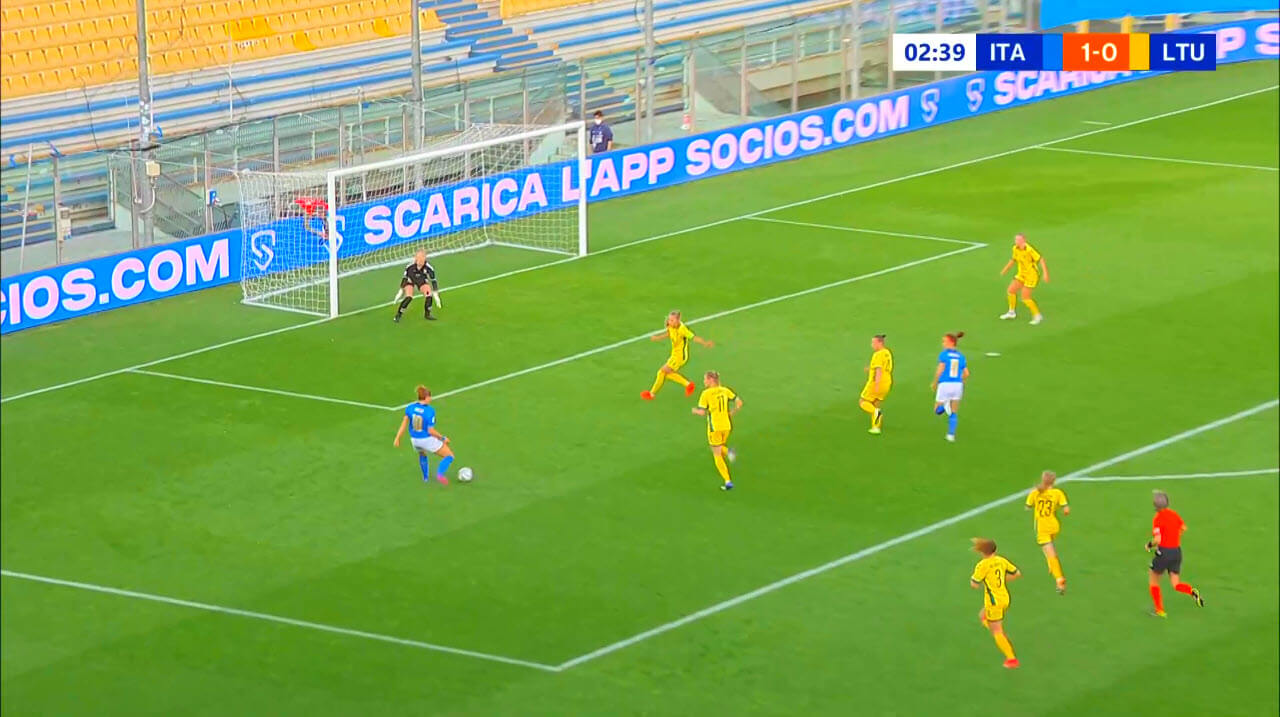 It is true that Italy was excellent in playmaking and in creating continuous opportunities, however, they have to shoot on target more often and avoid shooting off target. Shooting 24 times off-target is a huge number that needs to be fixed as soon as possible, knowing that these players are capable of doing much better inside the final third. Moreover, they will need to exploit set-pieces in a more beneficial way because nowadays, set-pieces represent a real weapon in difficult matches. 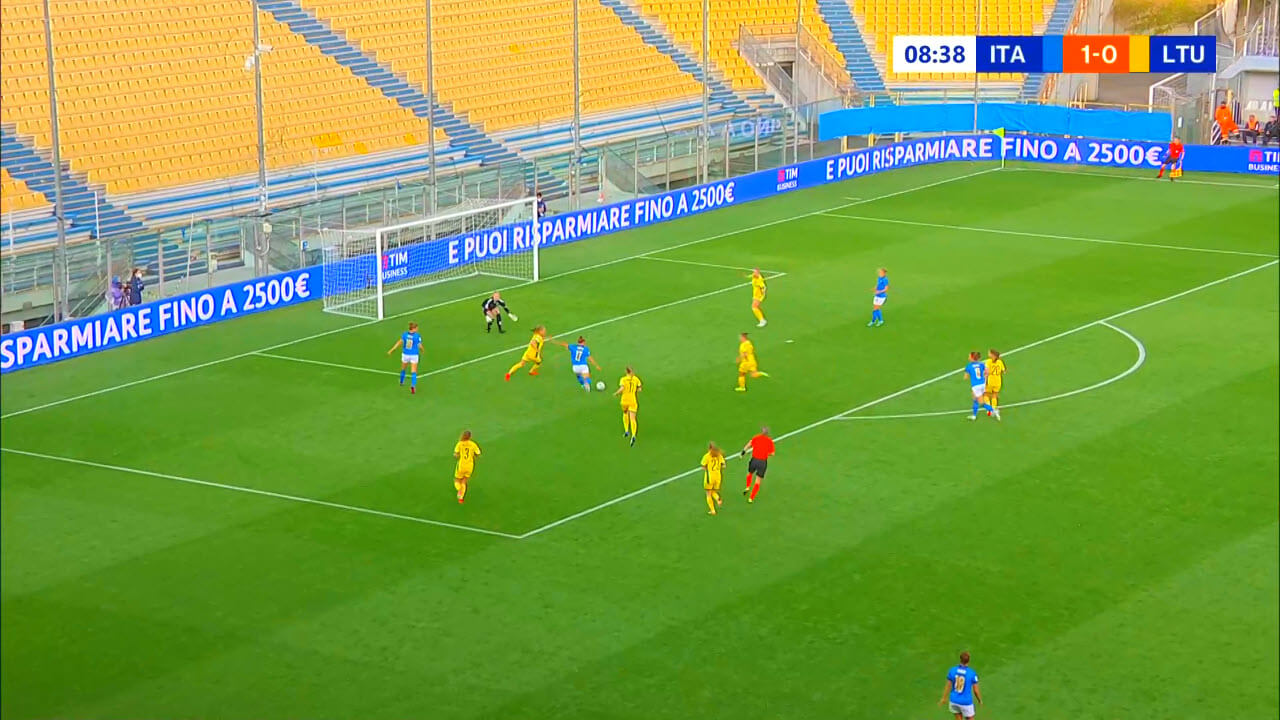 Italy got the win they needed against Lithuania and they scored as many goals as they wanted. However, their attacking performance still lacks some work in terms of finishing. Bertolini should exploit the time left ahead of the Euro 2022 in order to fix these concretisation issues and improve the team’s goalscoring abilities even further despite the satisfying result and the convincing overall performance.