Friday, November 26, 2021, witnessed a Switzerland Women’s crucial 2-1 win against Italy Women ahead of the final five matches of the Women’s FIFA World Cup 2023 Qualifiers in Group G. Switzerland’s win allowed them to gain three valuable points over their direct opponent which is Italy, and therefore, they are now at the top of the group.

This first spot gives Switzerland automatic qualification to the upcoming World Cup given that they win in the five remaining games or exploit Italy’s possible losses to maintain their top spot.

For the Azzurre, the situation is becoming complicated following this loss as the team is now second in the group standings. Not only this second spot can only enable Italy to gain access to the play-offs, but it also puts the team at risk of being chased by Romania Women, the holder of the third-place who are now three points away from Italy. The best scenario for Italy is to win the remaining games and more importantly beat Switzerland in their upcoming encounter which will take place in Switzerland. The mission doesn’t sound easy for the Azzurre but that’s the only way for them to reach the World Cup without having to suffer in the play-offs and play additional games that could drain the players’ efforts.

In this tactical analysis article, the focus will be mainly on how were Switzerland able to score two goals and maintain their lead while playing away while also exploring the Azzurre’s mistakes that led to their loss and what they need to fix in terms of tactics in order to make up for their errors soon.

The Azzurre were lined-up according to the 3-4-3 formation with Laura Giuliani as goalkeeper, a defence completely composed of Juventus’ centre-backs, Sara Gama, Cecilia Salvai and Martina Lenzini, a midfield that includes Roma players’ Elena Linari and Manuela Giuliano as central midfielders, Valentina Bergamaschi and Lisa Boattin as wingers with Barbara Bonansea and Milan’s Valentina Giacinti playing in attack to support Cristiana Girelli, the team’s forward, as you can see in this picture. 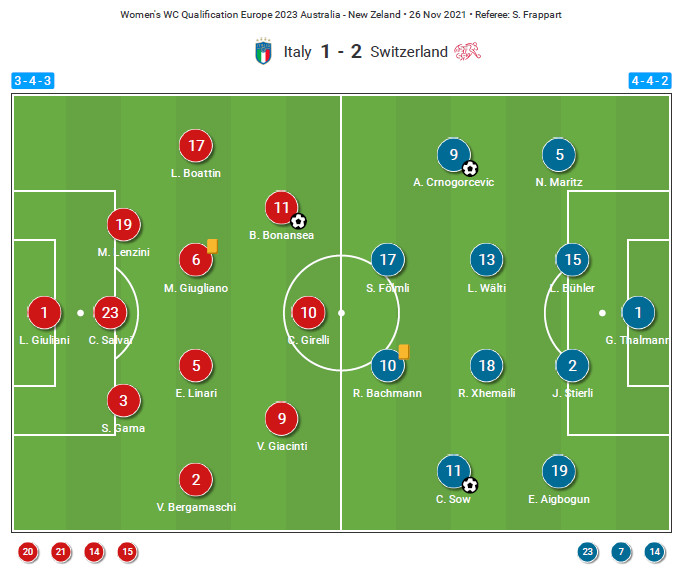 The reasons for Italy’s loss and Switzerland effective tactics

Italy’s problems started early in this match since they conceded Switzerland’s first goal at the ninth minute of the match following a clear marking mistake from both Gama and Bergamaschi who didn’t follow Sow as it was needed in order to prevent her from using her head just in front of goal. Instead, Sow was allowed to confuse the two Italian defenders by penetrating inside the box and reading the direction of Crnogorčević’s cross faster while reacting in a quick way that allowed her to win some time over her markers and score an important goal. Italy needed to defend better in such situations especially against powerful teams like Switzerland in order to not complicate the match. This defensive indecision and the late defensive reactions were among the main reasons for Italy’s loss in such an important match. 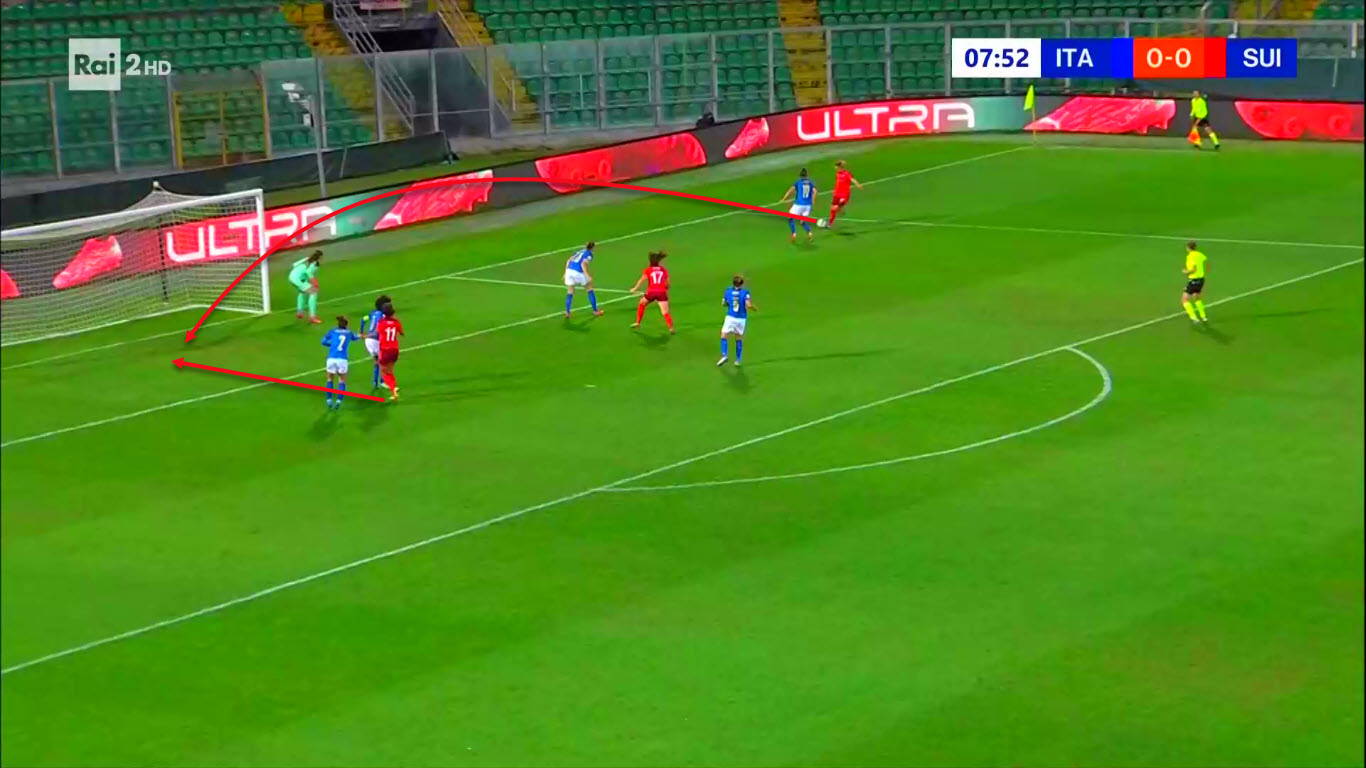 Following Switzerland’s first goal, Italy did not make any concrete reaction except some desperate attempts to reach the final third using long crosses from the back and towards Giacinti who moved well without the ball and was not as marked as Girelli. It should be mentioned however that passes towards Giacinti did not create much of danger since the latter was instructed to play on the right-wing, a position that doesn’t allow Milan’s striker to give her 100% since she’s mainly used to play as a striker or as a left-winger.

In addition to that, not a lot of support was given to Giacinti when she receives the ball, and that’s why we saw her trying to advance with the ball while looking around and hesitating about her passing choice several times due to the lack of movement without the ball from Italy’s players. The reason for this is also related to Switzerland’s excellent positioning and disciplined defending.

In the following example, it is clear how Giacinti was waiting for a movement of a teammate until the defender reached her and intercepted Giacinti’s hesitant cross. 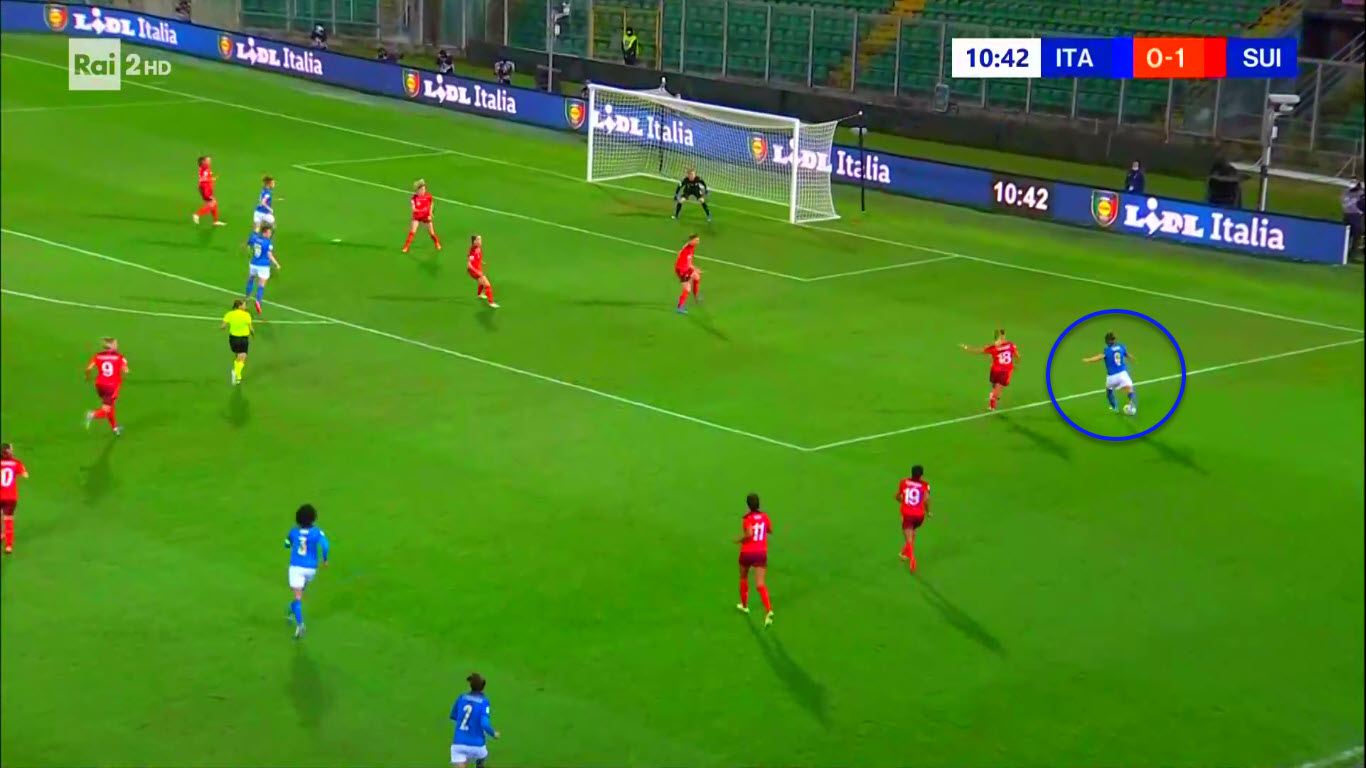 At the same time, Switzerland players were instructed to mark Giuliano and Linari, both Italy’s midfielders. They were successful in alleviating the playmaking threat of Giuliano by marking her tightly throughout the match to limit her number of touches/passes, since they studied the danger that Roma’s player can result in through her penetrations, quick movements and accurate-creative passes in the final third. Switzerland players went even farther in their pressing to make sure Italy faces difficulties whenever they try to advance from the back. And by marking the two key build-up players as well as both wingers, Italy’s build-up was usually so slow and no solutions except crosses towards Giacinti or Girelli were attempted. 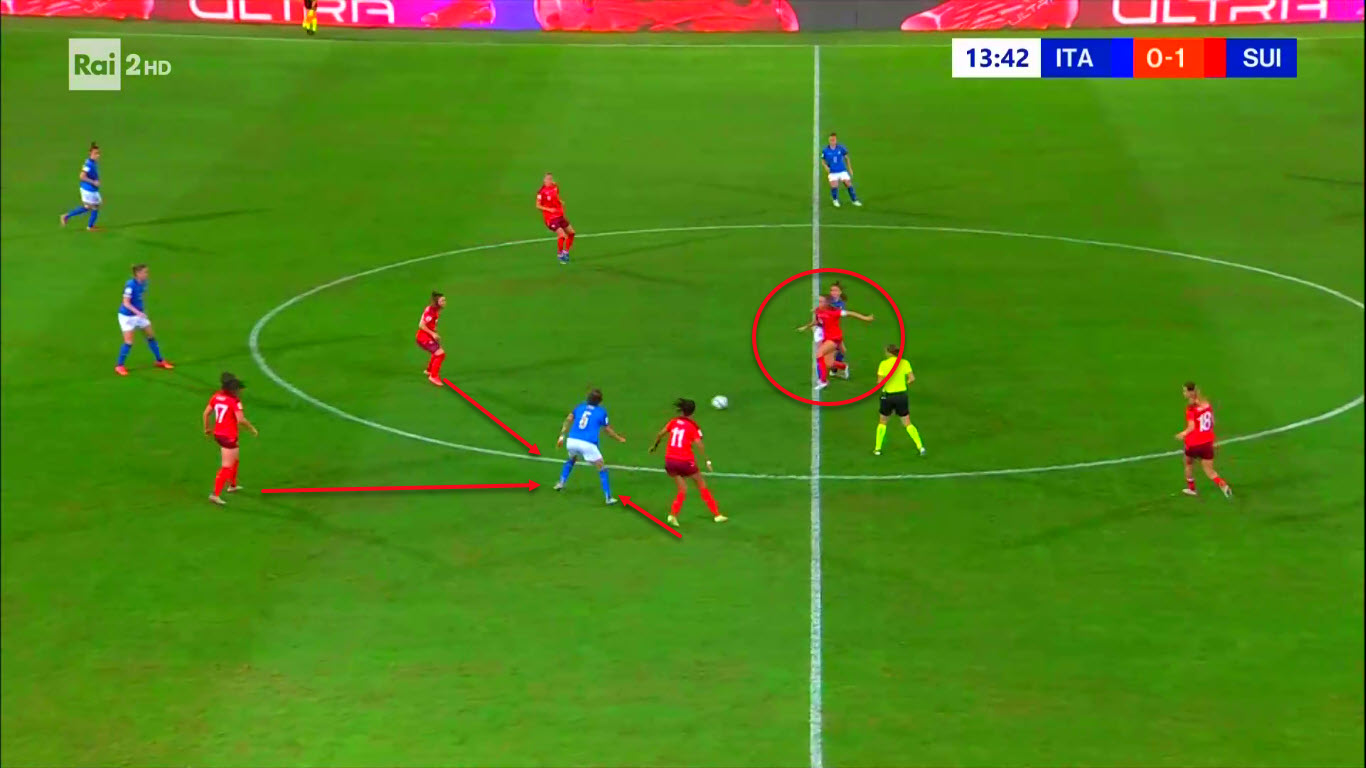 Switzerland were able to score a second goal at the 19th minute and this one confirmed Italy’s real defensive issues. The Azzurre need to address their marking attitudes and work on improving their efficiency in defensive duels if they plan to qualify for the World Cup and challenge the other big international teams seriously. For the second time in less than half an hour, Italy conceded two goals because of bad marking inside the box and lack of reaction/anticipation of crosses. Lenzini kept Crnogorčević so distant from her and allowed her to have the space and the time to prepare for the header and meet Bachmann’s excellent cross while not being disturbed. Italy’s defensive players need to raise their awareness about such situations and train on being more reactive during such dangerous actions and especially when it comes to defensive duels inside the box. 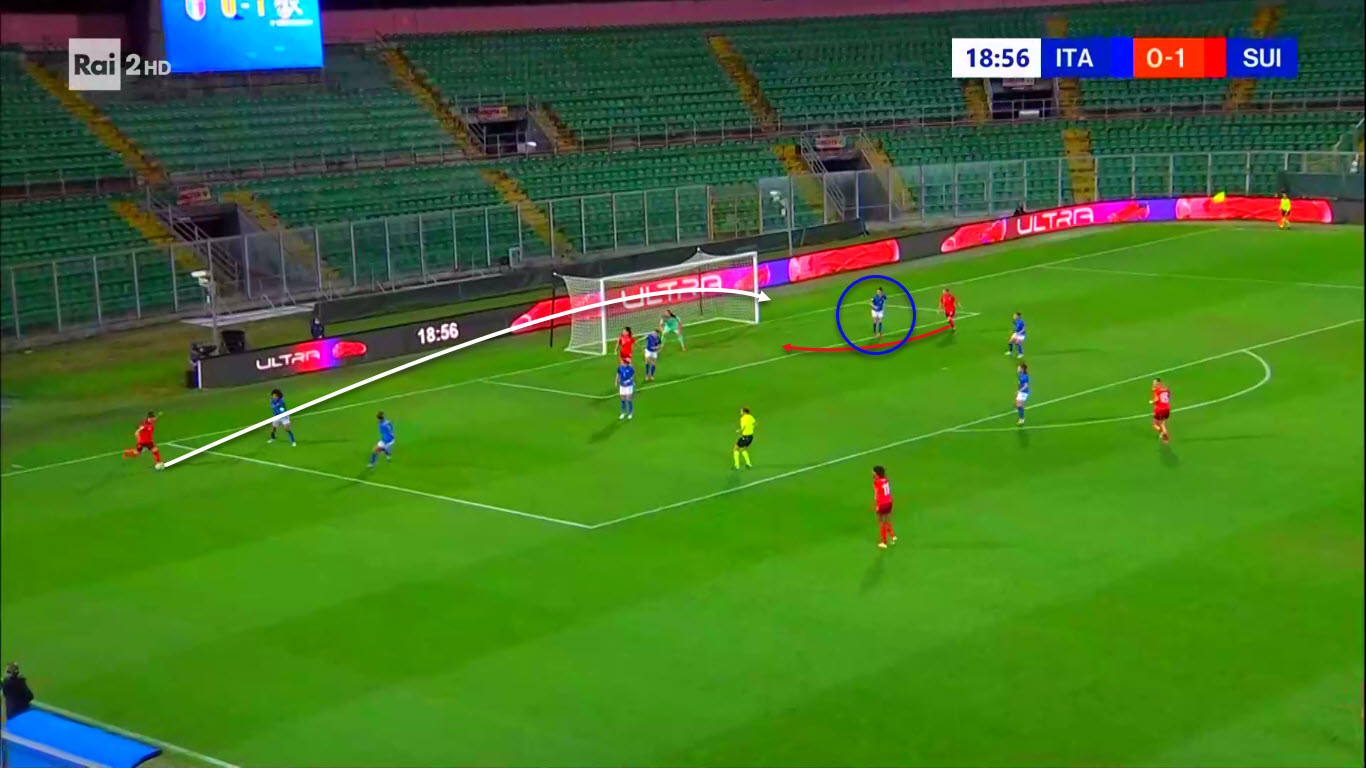 Italy under pressure: How to bounce back and what changes are needed

It is true that Italy’s qualification chances are still alive, yet there is a lot of work to do ahead of the upcoming qualification matches. The Azzurre were much more determined during the second-half and had more possession of the ball especially at Switzerland’s half. But, this possession was not exploited effectively as Italy’s attempts were most of the time stopped by Switzerland’s defenders. The only time where Italy succeeded in overcoming Switzerland’s defence was through Bonansea’s shot which was deviated to confuse the goalkeeper and go inside the net. Other than that, Italy gained some free-kicks but the execution was not as accurate as needed and in the few times where the free-kicks were well-executed, the players who were waiting inside the box didn’t win their aerial offensive duels.

Italy will need to improve their attacking systems and alternate their plans. Moreover, putting players in their natural positions and instructing them to do familiar roles would be extremely beneficial for this team since there are plenty of excellent Italian players in all positions. In order to be practical, an alternative idea to this formation would be the 4-2-3-1 with Bonansea as an advanced playmaker, Giacinti on the left-wing and leaning towards the box, and Bergamaschi as a right-winger while Girelli would be the striker. Another attacking plan would be to use both Girelli and Giacinti as strikers with Bonansea on the left, Bergamaschi on the right-wing, and three midfielders with different characteristics in a 3-5-2 formation.

During the last part of the second-half, Giacinti had more freedom and moved a lot even towards the left, and the interesting thing was the exchange of positions between Girelli and Giacinti especially when Girelli retreated to receive the ball and Giacinti took her spot upfront. Unfortunately for Italy, this was not repeated a lot and even in the few times that it occurred, Giacinti was not able to exploit the opportunities due to a lack of concentration in key moments like in the following example.

Bonansea spotted Giacinti asking for the ball and running towards the free space behind Switzerland’s defence and without being marked since the defenders were confused with Girelli’s backward movement. However, Giacinti was not able to control the ball properly otherwise she would have found herself in a one on one situation with Thalmann. 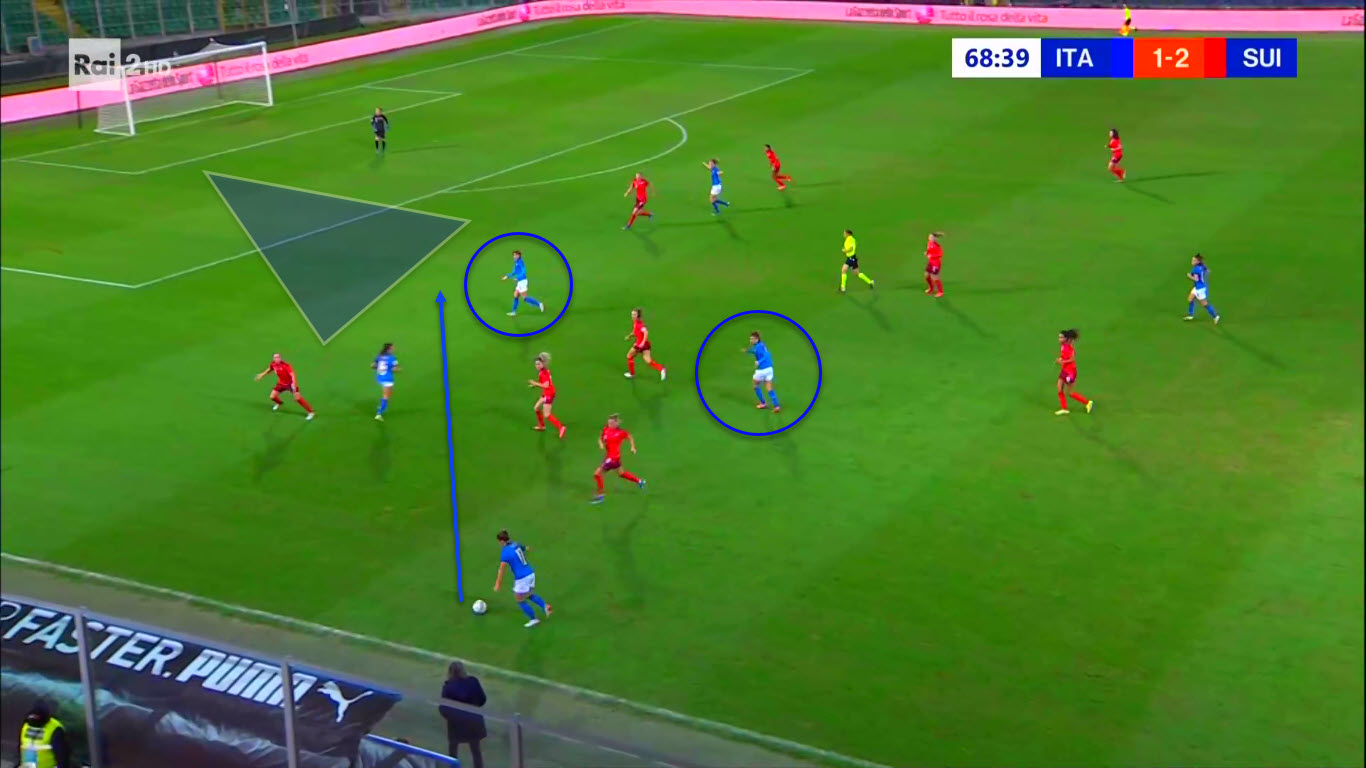 Switzerland won three crucial points in their World Cup qualification journey and are now waiting for another dropping of points from Italy in order to further secure their top spot of Group G. The team studied their opponent very well and knew how to stop their attacking threat and score as early as possible. They are now becoming one of the most powerful European teams since their players have developed a lot during the past few seasons and they have been putting on some excellent performances this season.

For Italy, there are a lot of tactical issues that need to be addressed in order to improve the team’s performances both from a defensive and an attacking perspective, such as the ones stated above. Plus, the absences of certain fundamental players like Galli, Caruso, Cernoia and others affected the team’s performance.