Athletic Club, most commonly known as Athletic Bilbao, has come under fire as their current form is flattering to deceive. The Basque club has only lost two games this season, and while that may look impressive at first glance, their ninth-place position in La Liga, four consecutive games without a win and eight draws accumulated puts a negative spin on things. As for Granada CF, they currently sit 16th in the Spanish topflight, which some may deem slightly disappointing, due to them finishing ninth in the previous season and finishing in European places in the 19/20 season. Coming into this game, both teams have been underperforming, and both outfits will want points on the board sooner rather than later if they still want to achieve their desired goals, come to the end of the season. (Source: https://www.betting.co.uk/reviews/betvictor/offers/)

This tactical analysis will look into Bilbao’s attacking tactics within specific zones on the pitch, while also diving into Granada’s in-possession organisation. Last, I will analyse Bilbao’s pressing game they showcased throughout this match.

Athletic Bilbao made use of a 4-4-2 formation, with Unai Simón in goal. In defence, Iñigo Lekue, Yeray Álvarez, Iñigo Martínez and Mikel Balenziaga. In midfield, Nico Williams, Unai Vencedor, Dani García and club captain, Iker Muniain. In attack, the partnership of Oihan Sancet and Raúl Garcíawere. 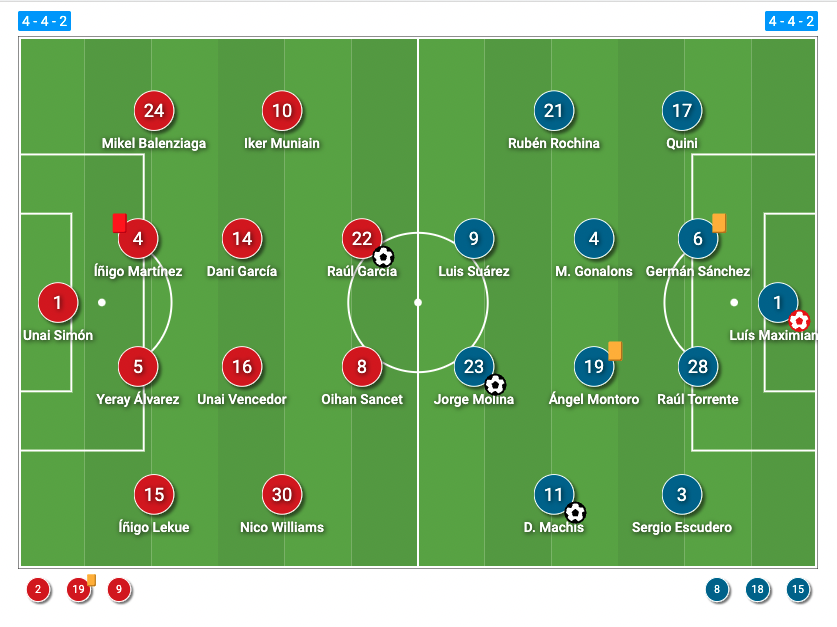 Bilbao’s use of the half-space

Some may consider Marcelino to be a boring coach, with his footballer not best pleasing on the. Regardless of this, his Athletic Bilbao team is organised with a clear framework embedded, whether within the defensive phase or the offensive phase. This offensive organisation can be seen through Bilbao’s use of the half-space, as they use this zone as a launchpad to propel attacks within the final third.

To get the ball within the half-spaces, to then penetrate in attacking scenarios, Bilbao build-up play was structured and varied at times but their most common shape throughout was their use of high and wide fullbacks. As this motion occurs, one of the midfield double pivot will drop into the back line and create a makeshift back three and operate with a temporary 3+1 shape. This movement from the Mikel Balenziaga and Iñigo Lekue allows both wingers, in this case, Nico Williams and Iker Muniain, to tuck inside and operate within the inside channels.

Bilbao’s wide men were not the only attackers to occupy the half-space, as both strikers Oihan Sancet and Raúl Garcíawere both prone to dropping into this space to facilitate play. Marcelino and his men were well aware of Granada’s strength when not in possession of the ball; with their strong defensive 4-4-2 mid-block and aggressive pressing, they were hard to break down. With this in mind, the player within the half-space excelled at either creating space for in-coming runners or sliding through passes to other attackers.

Here we have Iker Muniain, who has drifted from a wide position and is now in possession in a more central position. Granada is well acknowledging the quality of the Spaniard and looks to press him quickly to deny the wingers threat. Iker Muniain does well to use his gravity and attract the attention of opposition players, and in doing so, creates space for others. Muniain can flick the ball past his teammate’s marker on his left side and play progress from there. 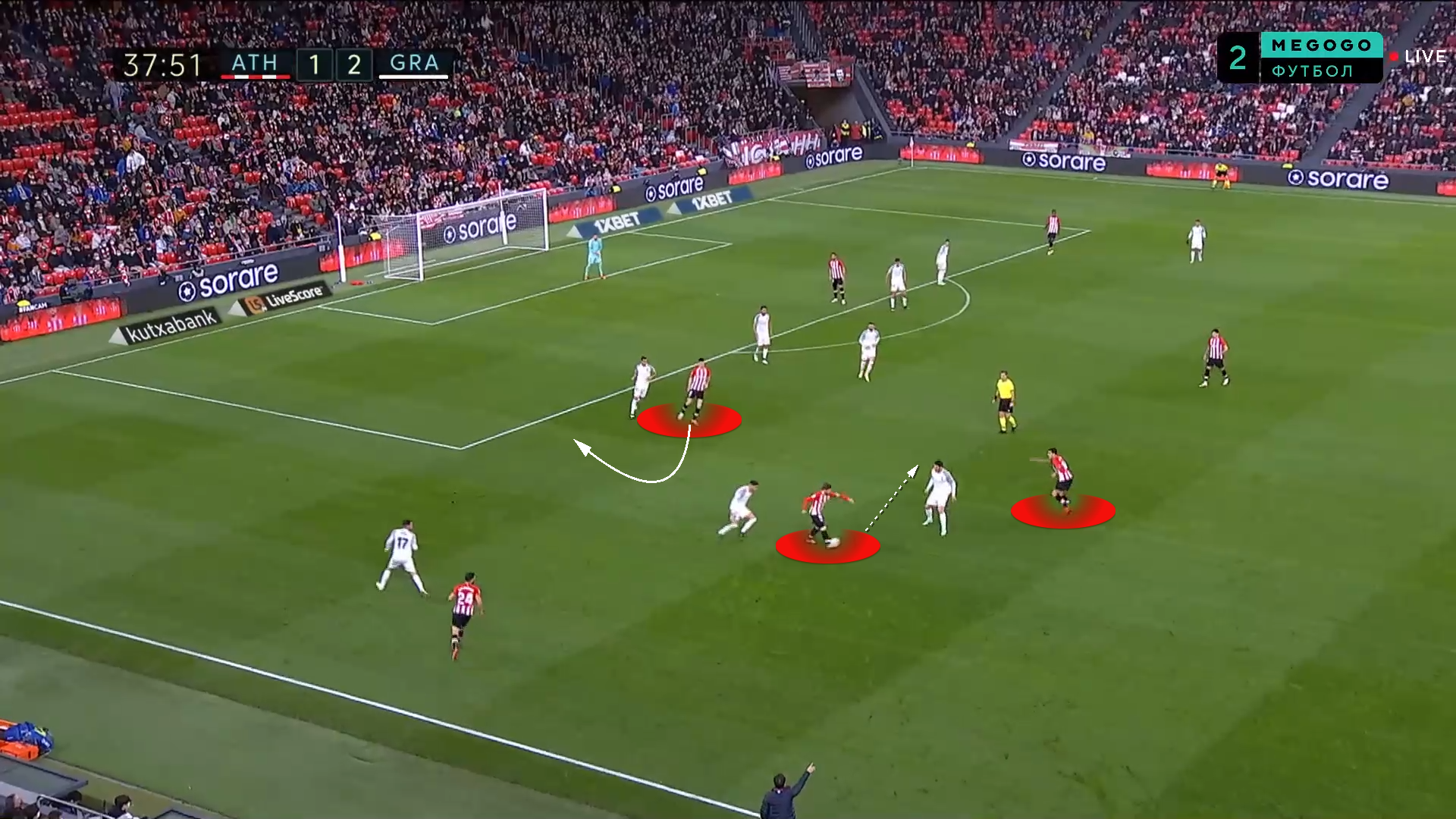 Another example of this zone being used as a launchpad for attacks; Granada, during this situation, is utilising man-to-man pressing. Centre-back, Yeray Álvarez progress the ball forward and can thread a ball to the feet of striker Raúl García, who can control the ball, turn and lay off the ball to Nico Williams. 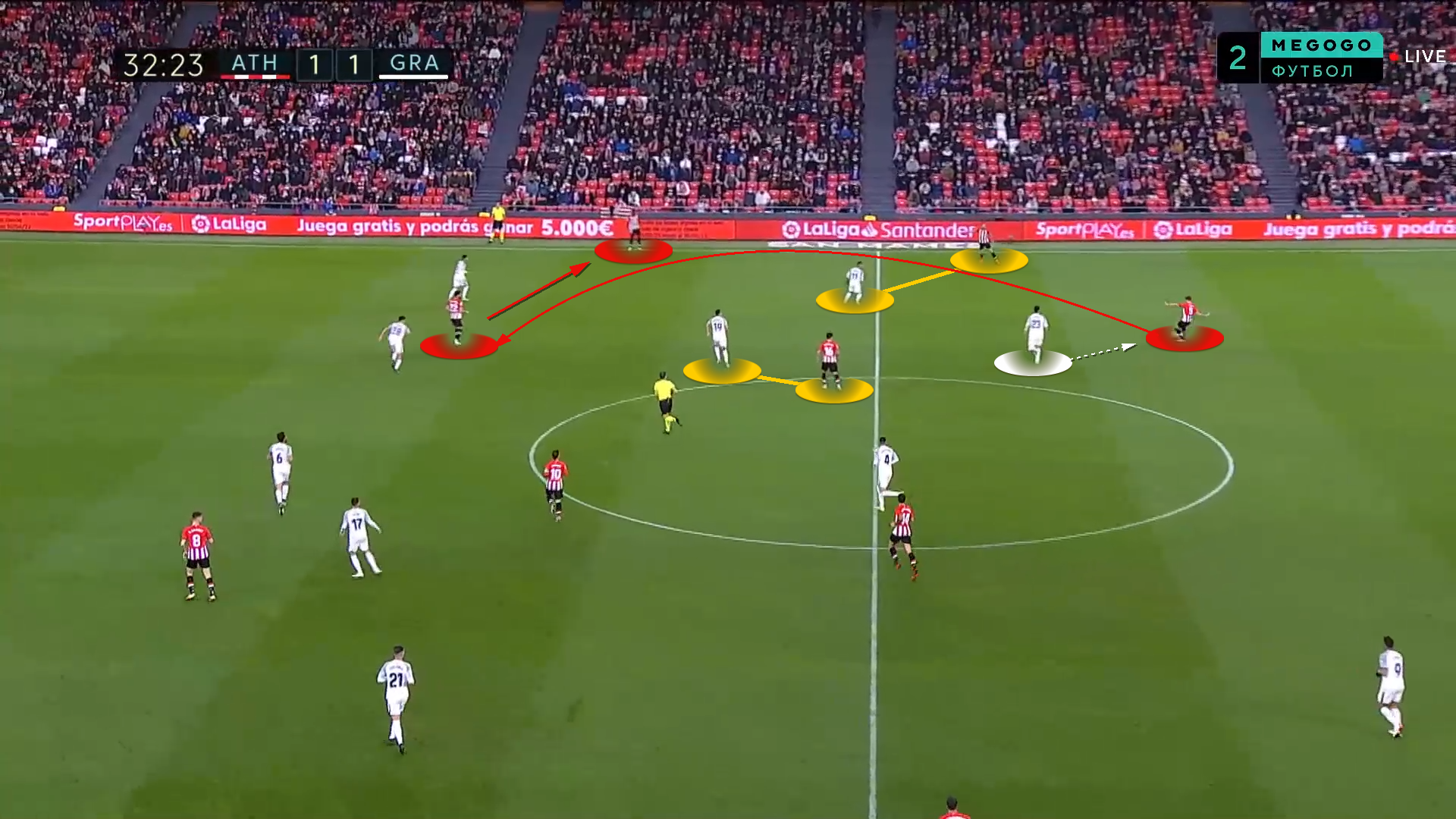 This use of the half-space and Bilbao’s wide combinations as nearby teammates utilised under-lapping and over-lapping runs created a lot of problems for Granada to deal with during this match.

Granada’s attacking structure can be likened to Bilbao’s, as both teams made use of a 4-4-2 as a starting formation and both had coherent plans going into this game. On the other hand, differences can be shown as the plan that was executed by Granada differed.

To progress the ball forward, Granada set it up in various ways. Their most effective variation utilised was the positions of their midfield double-pivot which comprised ex Ligue 1 midfielder, Maxime Gonalons and Ángel Montoro. This midfield duo would station themselves on the same horizontal line, to act as additional support against Bilbao’s pressing forwards. Golalons and Montoro would also stack; in which Gonalons play as a lone defensive midfielder and would place himself closer to his fellow centre-backs. Montoro would push higher and operate slightly wider. 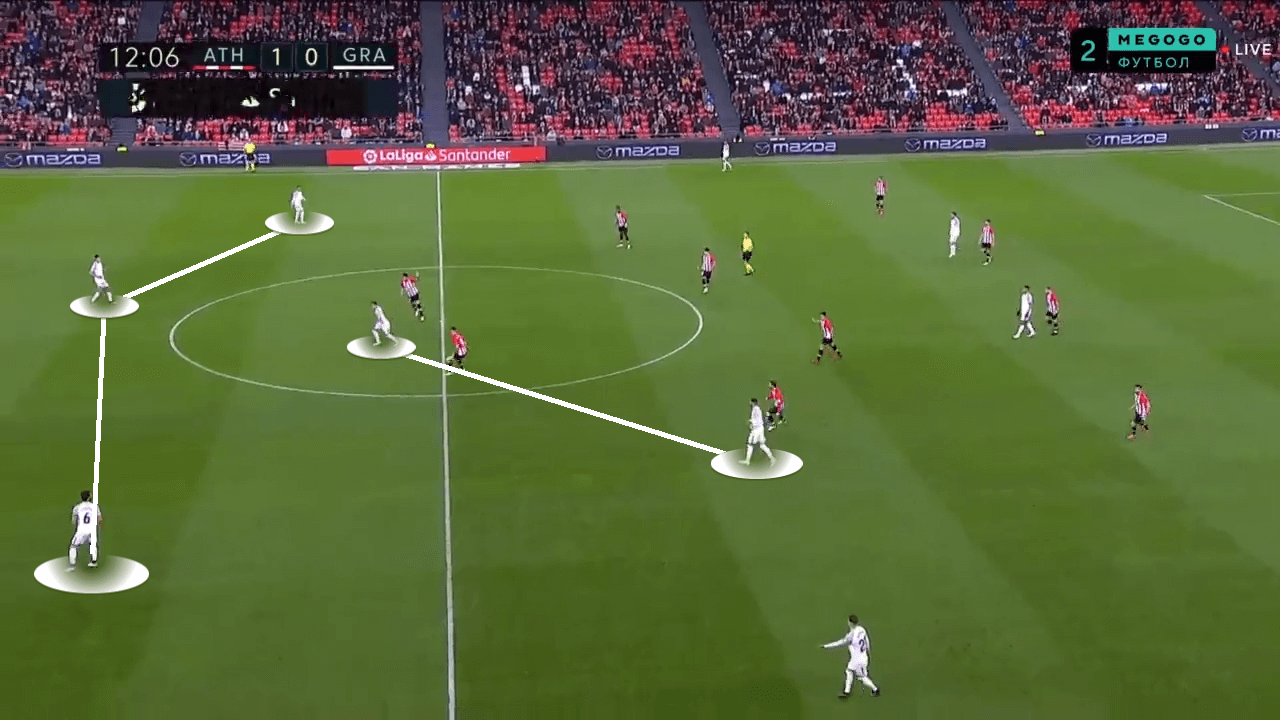 This situation was a good example of how Granada escaped Bilbao’s pressure. Here, Golalons drops deeper into the sixth space, with opposition players surrounding him. 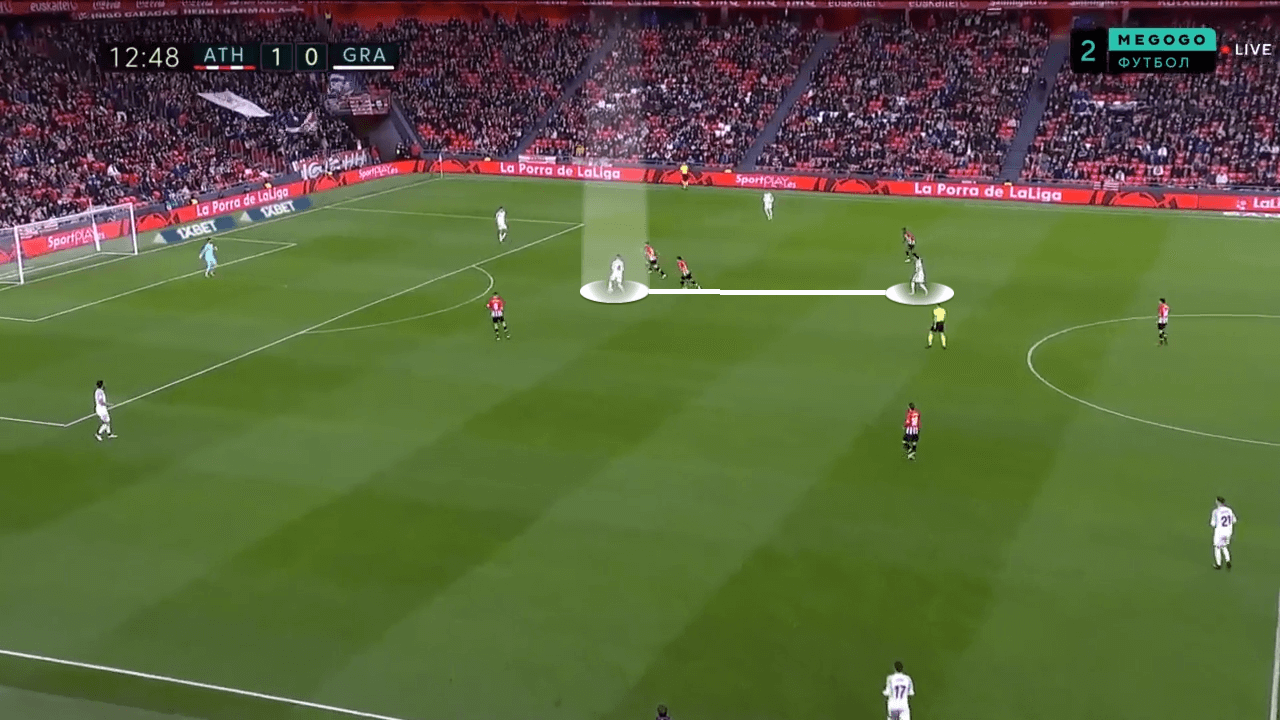 Because Bilbao’s attackers are attempting to win the ball back high with much intensity, they leave space behind, space Ángel Montoro can take advantage of. 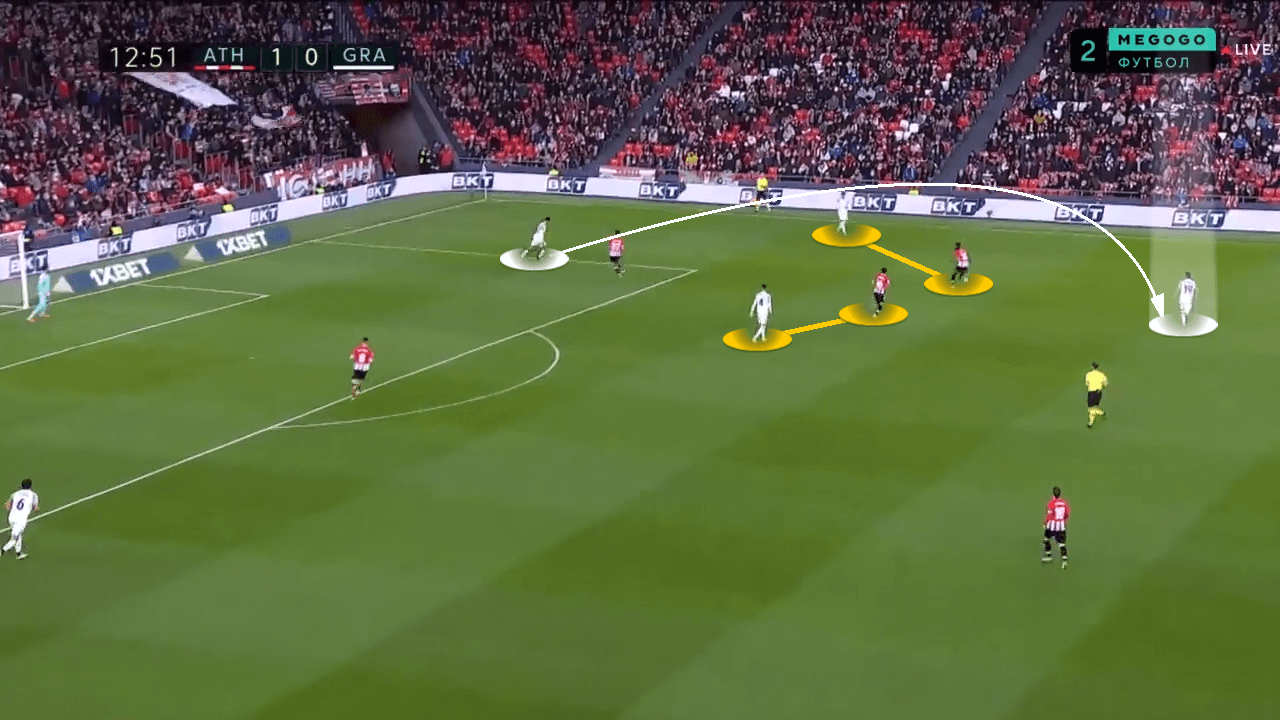 Granada did not control the tempo of the game as they amassed 38% possession, but when they advanced the ball into the final third, Granada did well to create space for wide attackers. Here, we can see when out of possession, Bilbao line up with a 4-4-2 medium block, which is incredibly narrow as they attempt to block the central passages. 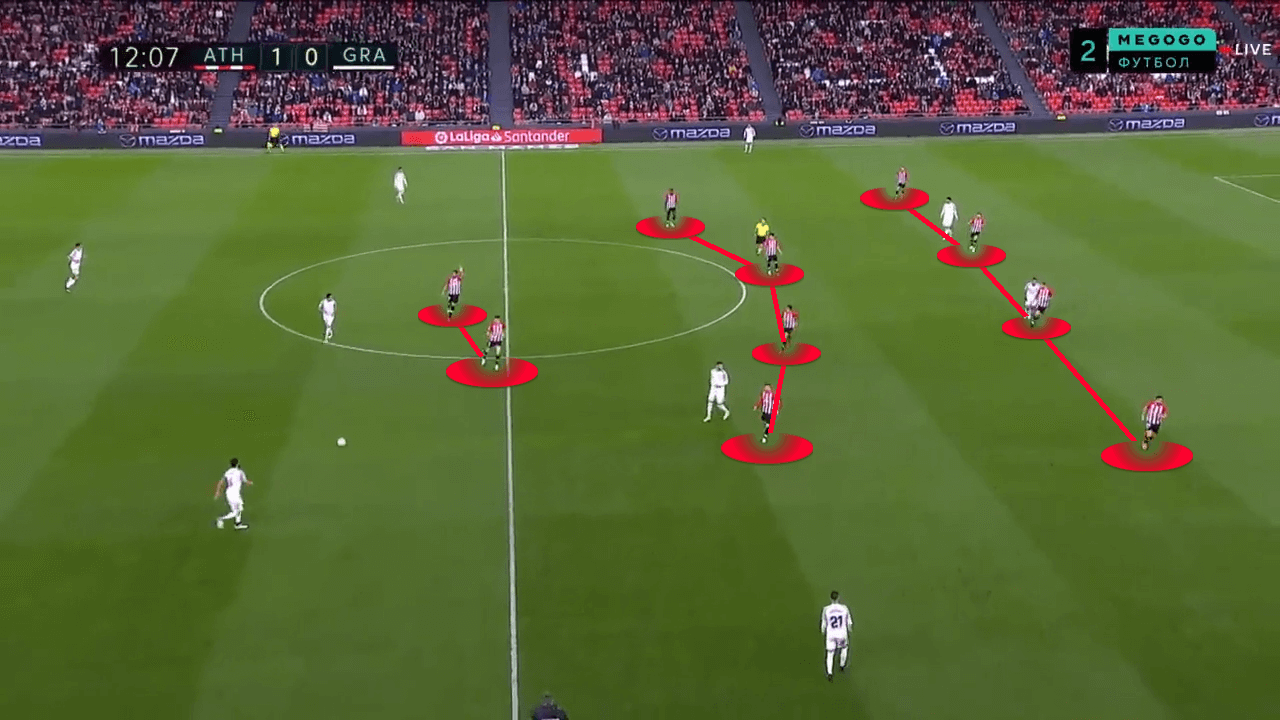 The ball is moved out wide, and Rubén Rochina is now in possession. Granada full-back Quini and Jorge Molina are both standing on the shoulder of Bilbao’s defenders, and Mikel Balenziaga is occupied with Luis Suárez on the near side. The pinning of Bilbao defenders creates space on the far side, as Rubén Rochina notices Darwin Machís is unmarked and sends a cross-field ball in his direction. Darwin Machís is now with the ball, with no opposition denying him entry into the opponent’s box. 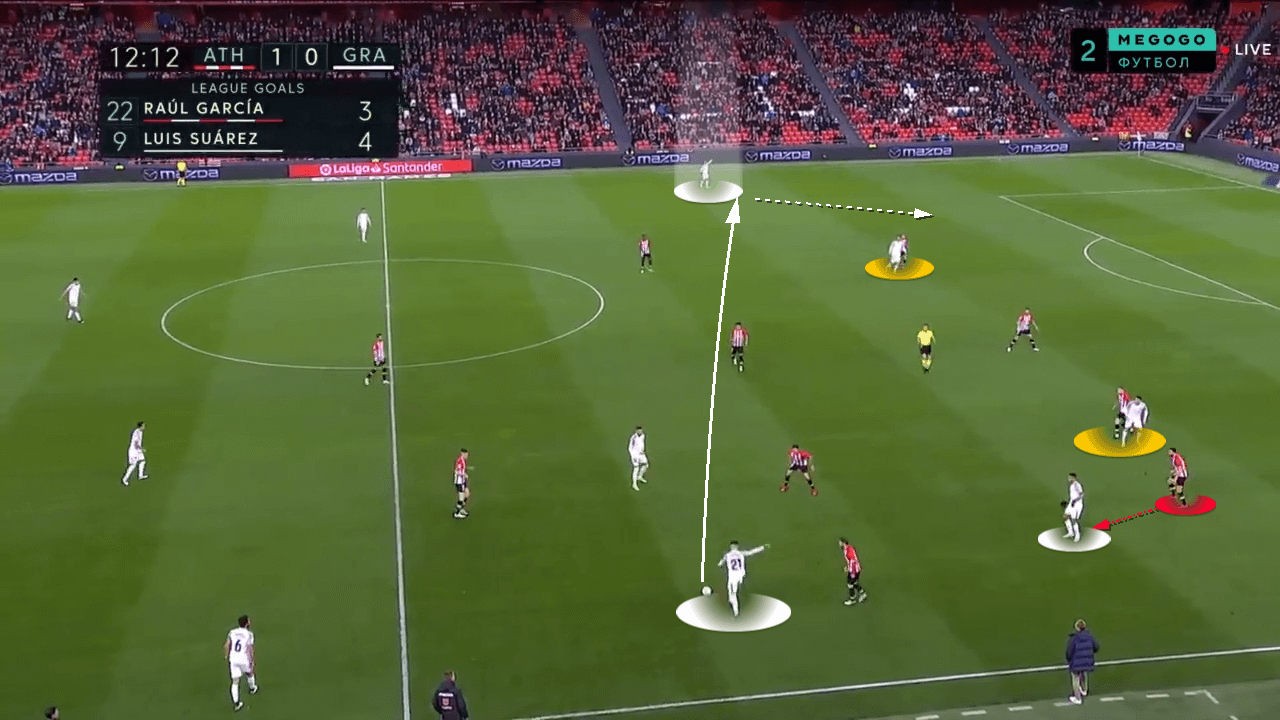 One major element that was influential within Bilbao’s defensive scheme was their use of the high press. The club from the north of Spain knew of Granada’s use of a single pivot during the build-up phase and prepared accordingly. Bilbao made use of a 4-4-2 formation out of possession, but this alternated during Granada goal kicks.

Here, Granada looks to play the ball out wide from a goal kick. Instead of Bilbao’s usual 4-4-2, they opted for a 4-4-2 diamond as central midfielder Unai Vencedor pushed higher up the field, in between the two wingers. Bilbao pressed using a 2-2 structure, looking to win the ball back high within Granada’s half. Within this scenario, Muniain, positioned on the left-hand side, is slightly more reserved compared to his midfield counterparts. This is so he can keep the opposition midfielder within his cover shadow, as well as allow space to Gonalons, positioned just in front of him. Granting him space tricks, Granada thinks he is available for a pass, not knowing Muniain can easily close the space. 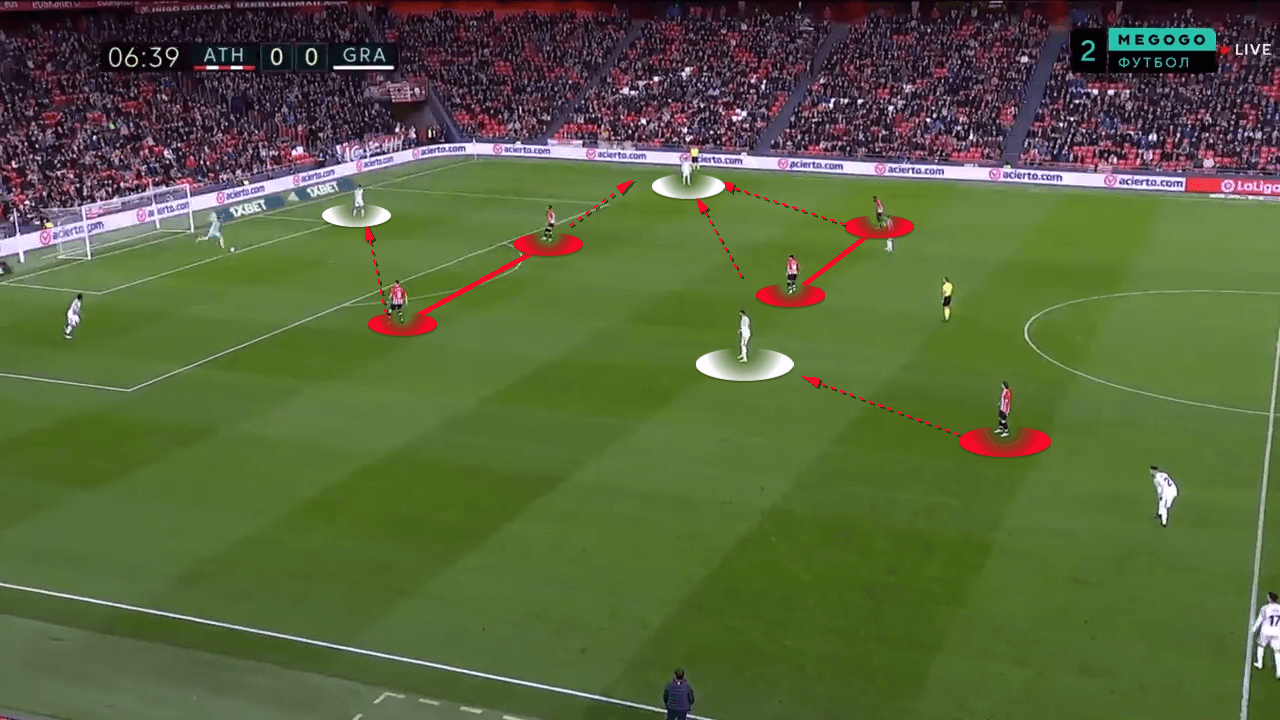 Off the basis of previous standings in the league and a wide range of impressive performances over the years, both Athletic Bilbao and Granada have been underwhelming, to say the least, this season as neither Marcelino nor newly appointed manager, Robert Moreno, former Barcelona assistant can get things going. With this being said, both teams went into this game prepared, which made for a fascinating tactical watch. Bilbao pressed high, trying to win the ball back quickly and efficiently. When in ownership of the ball, Bilbao excellently used the half-spaces. As for Granada, their attacks varied and pinned opposition defenders as a way of making space. Overall, both teams will be disappointed with walking away with just a point, but one thing is for sure, both clubs are on the up with the clear, structured performance they have displayed during this match. 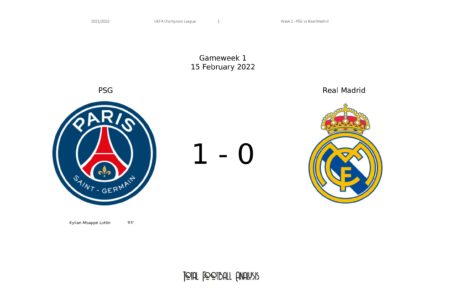 Tuesday evening saw PSG get a late winner against Real Madrid in the UEFA Champions League. We’ve broken down all the […] 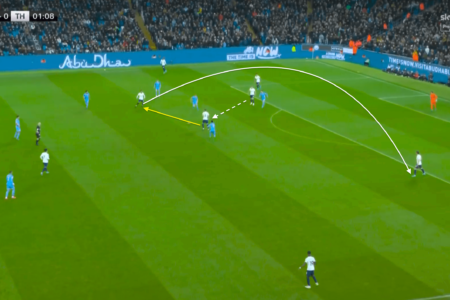