Arsenal Women won one of their crucial games of the season last Wednesday against Tottenham Women. The 3-0 triumph was fundamental for the Gunners not only for the race to the title and the team’s battle with Chelsea but also because of the delicate timing of this match. In fact, losing or drawing against Tottenham would have ended Arsenal’s title hopes once and for all given that there’s only one more game to play and the difference between Arsenal and Chelsea is actually one point. Therefore, winning against Tottenham kept Arsenal’s hopes alive before meeting West Ham Women in the last fixture and wishing to receive a gift from Manchester United who will face Chelsea in the final fixture as well. A draw or a Manchester United win will therefore be enough for Arsenal to lift the FAWSL title, of course, if they beat West Ham.

On the other side, it is true that Tottenham did not really need the three points the way Arsenal did given that the team is in the middle of the table and neither battles for avoiding relegation neither for UWCL spots. Nevertheless, this game is a North London derby and no team likes to lose in such rival games. Tottenham however committed numerous defensive mistakes in this match that led to their loss and no concrete reaction was seen from their players especially in attack and despite having the opportunity to get back in the match, knowing that they were losing 1-0 from minute 4 until minute 71 when Arsenal added their second goal.

In this tactical analysis article, we will focus on Arsenal’s attacking strength and tactics and assess their overall performance while exploring Tottenham’s defensive mistakes and what they have to fix in order to improve their performances during the next season.

Arsenal started this match using a 4-4-2 formation with Manuela Zinsberger as a goalkeeper, Noëlle Maritz, Leah Williamson, Lotte Wubben-Moy and Stephanie Catley in defence, Lia Wälti and Kim Little as central midfielders, Beth Mead and Caitlin Foord on the wings while Vivianne Miedema formed an attacking duo with Stina Blackstenius.

For Tottenham, the team opted for a 4-2-3-1 formation with Tinja-Riikka Korpela as a goalkeeper, Ashleigh Neville, Molly Bartrip, Shelina Zadorsky and Kerys Harrop in defence, Josie Green and Maéva Clemaron as central midfielders, Jessica Naz and Rosella Ayane on the wings with Kyah Simon playing as an advanced playmaker behind the striker, Rachel Williams. 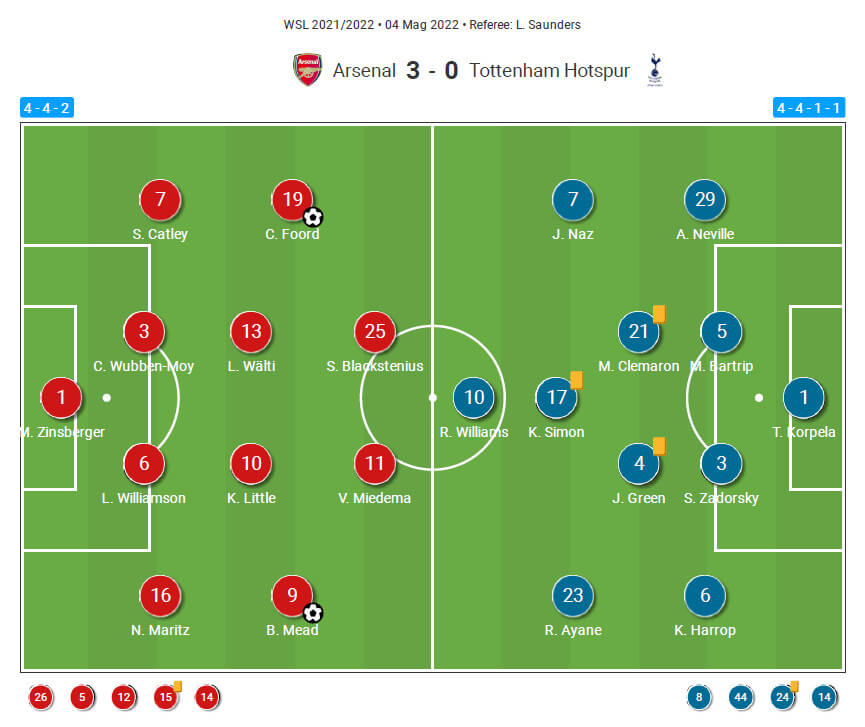 Arsenal started this match with no hesitation and the players looked more ready to circulate the ball and especially reach the final third as soon as possible. That’s why they were able to score the first goal of the game at the 4th minute when Mead received a pass into space by Williamson and didn’t find any sort of disturbance or close marking from Tottenham midfielders who were passive during action. Mead exploited this organisational mistake and advanced with the ball until she reached the box where the centre-backs were waiting. The fact that Tottenham midfielders were way behind Mead and that defenders did not advance to anticipate Mead’s next move made things easier for the English international who put the ball to her left foot and surprised the goal with an accurate shot that went inside the net. And of course, Bartrip’s tackling attempt was too late as it didn’t stop or deviate the shot. 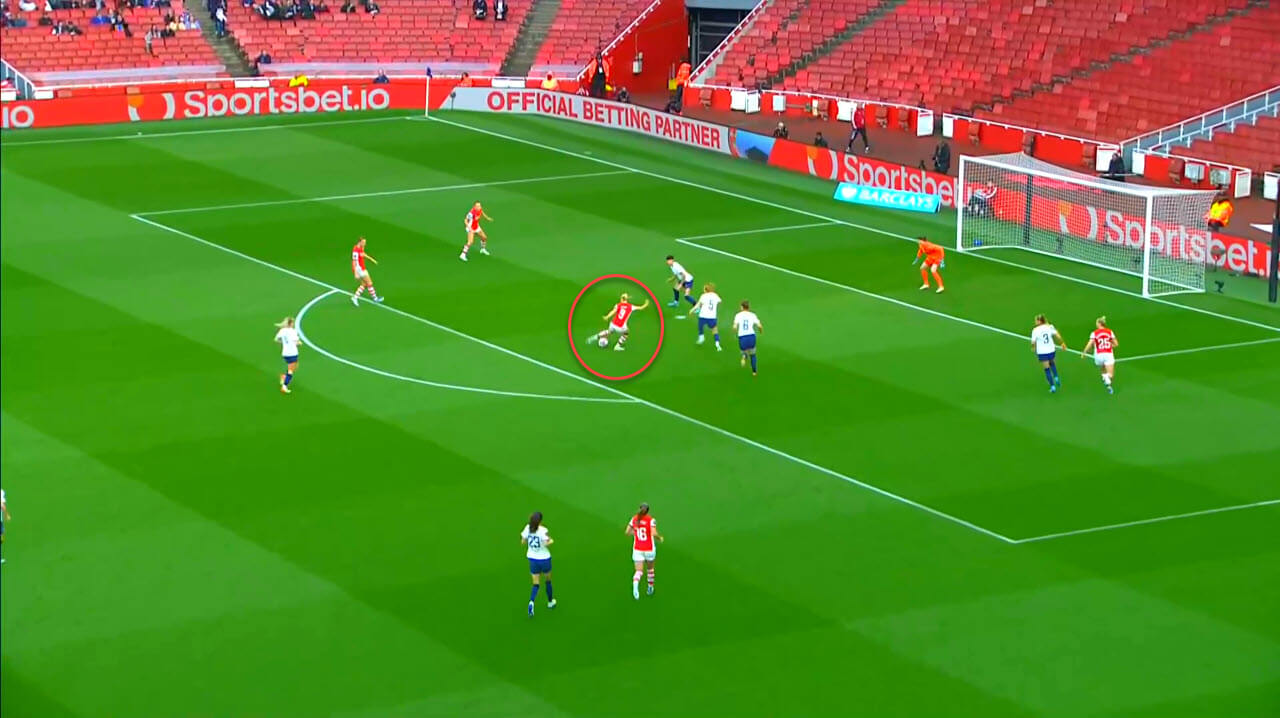 Arsenal shot 18 times with seven shots being on target. It is surely not the best of averages but what counts for Arsenal is that they were able to score three goals out of these seven shots. This however doesn’t mean that Arsenal aren’t required to improve their shooting accuracy, which was not good enough. After scoring their first goal, the team tried to add a second one but the last key pass was always missing, and even when it did, the finishing was not as accurate as needed, such as in this example when Mead dribbled past her direct opponent and gave a pass to Miedema who shot with her weaker foot and the ball went out. 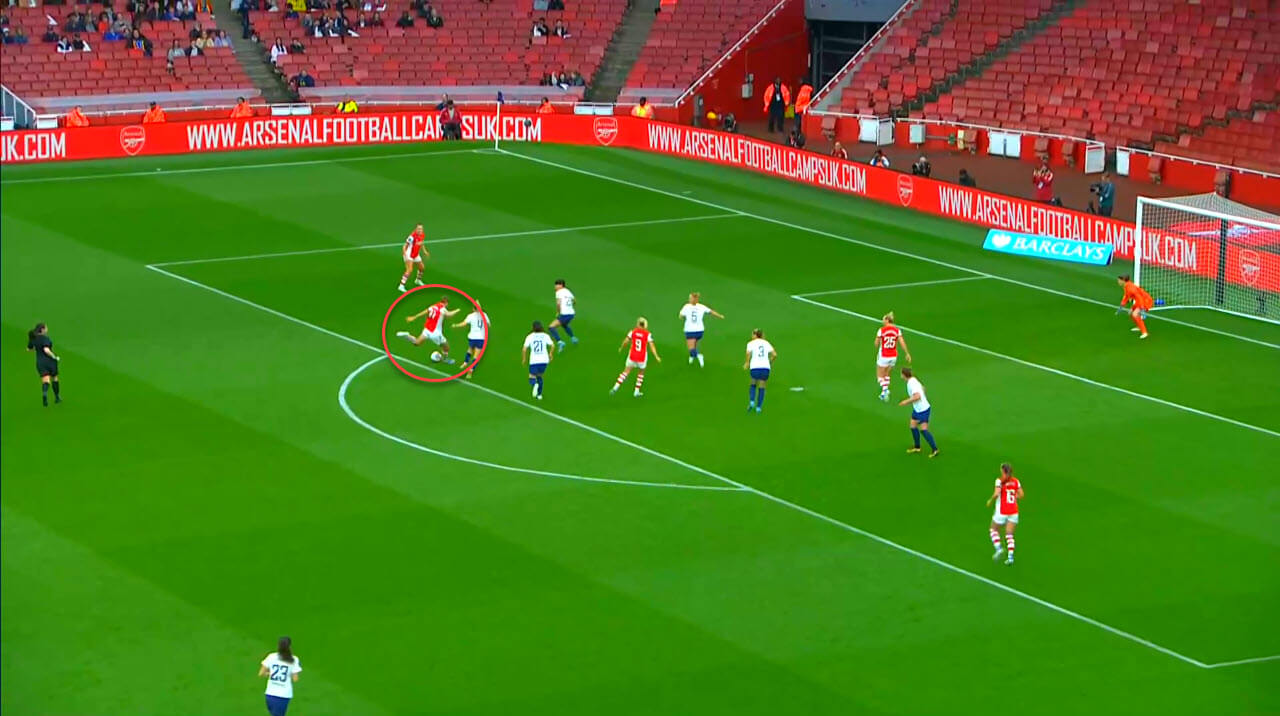 During the second half, Arsenal looked more dangerous while Tottenham defended with more tiredness as they were not to get out a lot from their own half and they didn’t make a single counterattack, which made things worse for them especially after Arsenal’s second goal. The credit goes mostly to Miedema for setting up an accurate key pass towards the box and also to Foord who was ready to anticipate her markers and put the ball inside the net. 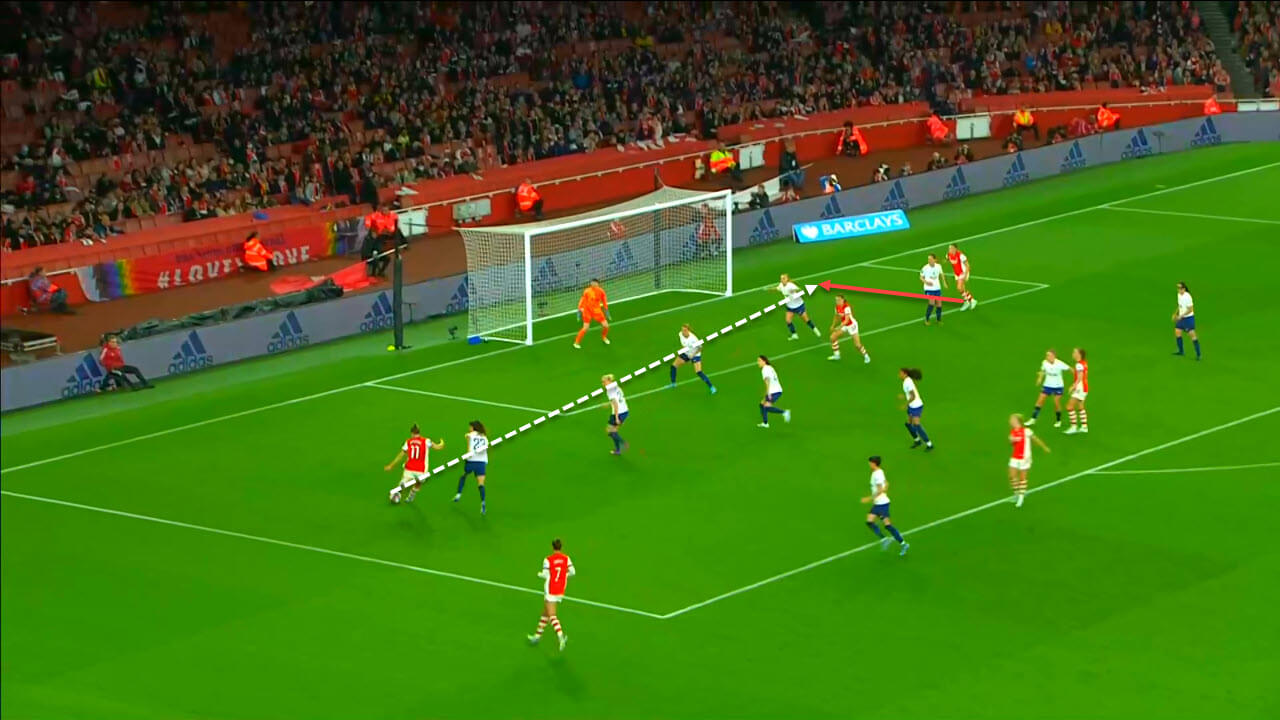 Few minutes later, Foord was able to add another goal after a well-played counter-attack that was initiated from the right-wing until reaching Mead. The latter intelligently gave an assist to Foord who had one intention in mind: doing a curved shot. It was a beautiful goal for the Gunners with which they secured the three points. It should be said that Arsenal did not suffer from a Tottenham reaction following these goals as they were solid enough in defence, won 72,92% of the defensive duels and did not concede shots on target. Also, Arsenal’s continuous attacking pressing made Tottenham’s build-up slower and prevented them from reaching Arsenal’s half with ease, which served Arsenal in the course of the match. The pressing obliged Tottenham players into committing passing mistakes as well, but Arsenal did not exploit those mistakes in the best of ways. 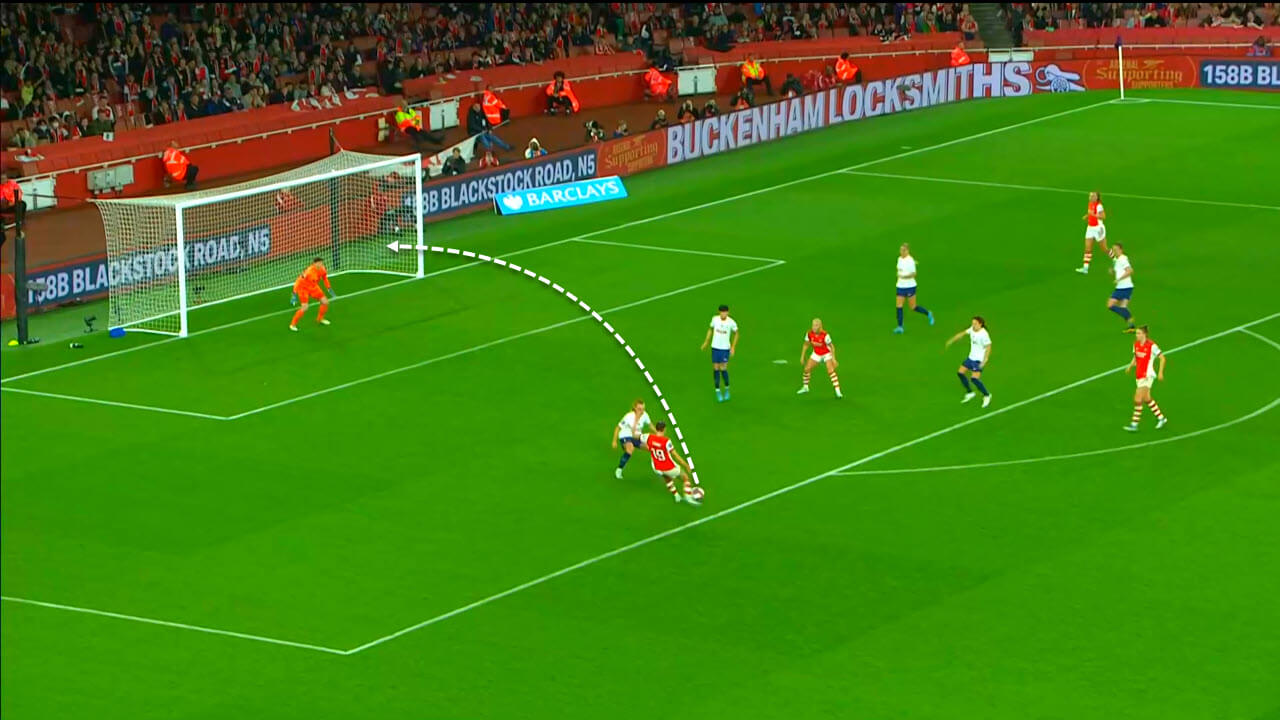 Tottenham’s performance against Arsenal was surely not good enough since the team looked hesitant in defence and inefficient in attack. They need to fix their playmaking issues very soon if they want to compete seriously next season given that the team shot five times and none of them was on target, won 27,08% of the offensive duels and were not able to make any kind of counterattacks. In order to create something upfront, the team needs to work on certain combinations and movements with and without the ball and most of all, the players will need to be quick enough and time their decisions very well to be able to threaten teams that are organised defensively, like Arsenal. Moreover, in games like these, the players might have very few goalscoring opportunities and they are required to make the best out of them, unlike what Simon did here when getting the chance to shoot on goal from a short distance, an empty goal with Miedema covering the left side. Simon could have scored a comeback goal if she shot the ball towards the right angle but her decision-making was not good enough given that she opted for the side where Miedema was standing. 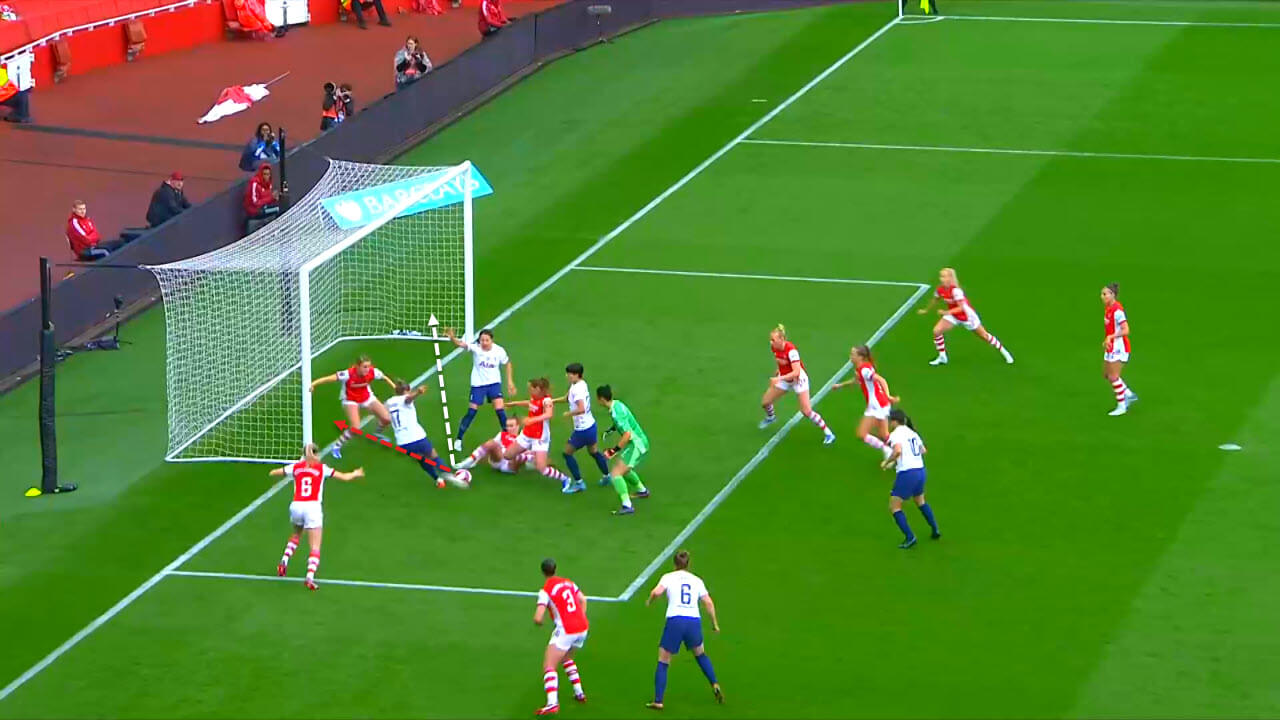 From a defensive perspective, Tottenham made a lot of errors in marking during Arsenal’s three goals as they often looked passive in terms of following direct opponents and making sure they don’t get the ball or at least they don’t get it easily. This sort of “defensive aggressivity” was lacking throughout the match and the same applies to the awareness and the reaction to opponents’ off the ball movements. A lot needs to be addressed for Tottenham in terms of defensive organisation, marking and dealing with dangerous strikers/winger/midfielders in order to avoid conceding this number of goals in the future.

The following picture shows Williamson’s intelligence in terms of passing but at the same time it highlights Tottenham’s defensive naivety and slow reactions. Williamson saw Miedema being unmarked in midfield just before reaching the ball to kick a free-kick. And as she was intending to kick the ball, she purposely turned her head towards the two left defenders as she was intending to pass to that side. Tottenham players didn’t get the trick and didn’t mark Miedema and therefore Williamson did what she wanted successfully and Miedema received a great pass between the lines before passing to Blackstenius, completing an attack with just two passes from defence to the final third. 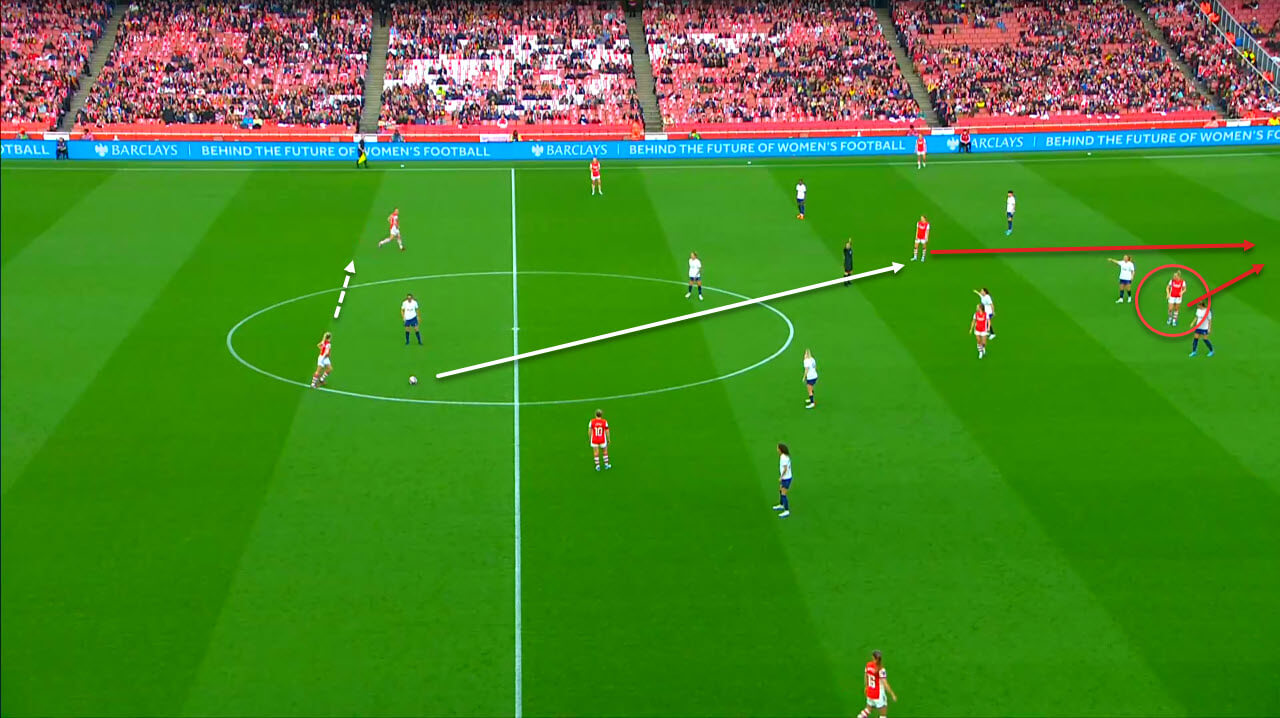 Arsenal won this match convincingly while putting on a solid performance and confirming that they will be battling the title until the last minute despite Chelsea’s slight advantage. They scored three goals and were able to score more if they exploited the chances they created better and that’s exactly where they will have to keep improving.

On the other hand, Tottenham will have to revise numerous things both from an attacking and a defensive aspect given that the team looked a bit fragile in defence and had no clear ideas in attack. Yet, the team will have plenty of time to address these issues prior to the start of next season.