Champions League 2021/22: Why Liverpool suffered against Villarreal and what Klopp changed – tactical analysis

The UEFA Champions League 2021/22 semi-finals were as dramatic as it gets and offered the fans a football spectacle with lots of turnovers and unexpected events. The second leg between Villarreal and Liverpool didn’t disappoint and both teams displayed great character in the fight for a final spot.

Despite being 0-2 down after the first leg, the Spanish side went out with an aggressive approach, determined to make Liverpool’s life harder and stop their route towards the final. Unai Emery tried to give Klopp’s side a taste of their own medicine by pressing intensely and stopping their attacking efforts.

The Merseyside, on the other hand, struggled to employ their usual strategy but Jürgen Klopp managed to get the most out of the situation and instructed his players to give away the initiative and use the opposition’s strengths against them.

Villarreal’s strategy was successful in the first half and the team managed to score twice, completely dismissing Liverpool’s advantage. The team moved out of their comfort zone and pressurized their opponents in effort to have more of the ball and to limit the Reds’ space for movement on the ball.

Liverpool, though, started the second half with boosted confidence and used Villarreal’s exhaustion in their favour to achieve a complete turnover from 0-2 to 3-2.

This tactical analysis explains the tactics in the game and examines how Emery managed to scare Liverpool and how the Merseyside fought back to get the win.

Emery opted for his favoured 4-4-2 formation with Gerónimo Rulli on the goal. Pervis Estupiñán, Pau Torres, Raúl Albiol and Juan Foyth formed the defensive line, with Estupiñán being actively involved in the final third actions as per usual. Dani Parejo and Étienne Capoue covered the central midfield with Francis Coquelin and Giovani Lo Celso moving around the flanks.

The two wide players would also cut inside and combine with their teammates in aim to threaten the opposition and create opportunities. Boulaye Dia and Gerard Moreno led the attack but none of them was productive enough in front of the goal and the team produced only five shots.

Robertson lacked concentration and was targeted by the opposing players forcing him into individual mistakes and losing the ball, which affected Liverpool’s efficiency in possession. Similarly, Alexander-Arnold often failed to retain possession on the right, mainly due to being pressed and sending inaccurate balls. Combined with the attackers’ failure to exploit spaces, the team only produced a single shot in the first half.

Villarreal’s pressing strategy for the game was the main weapon for troubling Liverpool’s attacking movement. The team pressed high up the pitch, limited the opposing players’ space for movement and put a lot of effort into stopping the opposition in midfield. Their aim to position well defensively and limit the spaces between the lines resulted in the team being able to recover the ball frequently, with most of their successful efforts coming in the central areas.

They had a well-measured approach, and while they ended up with 19 recoveries in the advanced areas, most of them were done on the edge of the final third. That’s where they tried to place their first line of defence and block Liverpool’s efforts on the ball.

Achieving an average PPDA rate of 6.41 in the game shows how ambitious Emery’s side were and how the manager had identified how to use Liverpool’s strategy against them. Their 2021/22 average of 11.84 underlines the efforts Villarreal put into blocking some of the Reds’ most efficient players in possession.

The team aimed to overload the wide areas and expose the full-backs’ advanced positions. Their movement on the flanks, especially Estupiñán’s movement forward, aimed to catch Alexander-Arnold out of position or at least engage him in a way to allow his teammates to combine in attack. The Englishman struggled with his decision-making and often failed to cover the right player, which formed gaps and allowed Villarreal more freedom in attack. Keïta failed to provide the needed support to stop their attacking efforts.

Emery’s side couldn’t adjust to the change of attitude in the second half and while there weren’t many tactical chances, apart from Luis Díaz’s appearance, Liverpool started to play on their potential. A few avoidable actions by the keeper Rulli additionally complicated the Spanish side’s life and they immediately fell victim to the more accurate actions of the Liverpool players in the second half.

While the Merseyside are considered one of the most consistent and strong teams in Europe lately, they do have some weaknesses that if correctly identified could cost them a lot. Their main struggle in the first half was more so the individual issues rather than differences in the approach.

Some of the players struggled under pressure which resulted in a series of inaccurate actions, others lacked concentration and had poor decision-making, which resulted in wasting their chances. And with Villarreal strictly focused when out of possession it was difficult for the Liverpool players to exploit spaces and have their usual connection.

Konaté would move away from their strategy too often, and instead of combining with his fellow defenders or Fabinho to smoothly build-up, he would prefer to release pressure with long balls with an unknown receiver. Defensively, he would often move out of position, which would make it difficult for his teammates to cover depth. Things in attack also looked unusually bland for Liverpool, with all three players failing to combine well and having tons of space between each other, making it easier for the opposition to control their movement and block their efforts. The result of their lack of creativity and connection was shooting only once in 45 minutes – a stat that is difficult to believe to, considering the Reds’ quality upfront.

Despite everyone’s lower efficiency than usual, the team’s main weakness remained the lack of competitiveness on the flanks. The second leg underlined Alexander-Arnold’s weaknesses and put his defensive abilities under the radar once again. The Englishman’s biggest issue was not his actions in direct challenges but more so his late reactions and inability to track the opposing players’ runs and mark them properly. More than 70% of Villarreal’s attacks on the left were successful.

The lower efficiency of the rest of the players also affected the team’s performance in possession. Players like Thiago and Fabinho who are crucial for the team’s build-up-play not only weren’t as active as usual and their pass frequency was unsatisfying, but more importantly, their pass completion rates have been disappointing in the first half, which made it even more difficult for the team to minimise the spaces and create chances.

The other midfielder, Keïta, failed to provide the same reliability in midfield as Jordan Henderson would have and wasn’t useful enough neither in defence nor in the build-up. The lack of a strong presence in the central areas resulted in difficulties in finding spaces upfront and in marking the opposing players’ movement.

Contrary to the beliefs, Liverpool’s second-half performance wasn’t a result of some unusual tactical changes and innovative thinking by Klopp. The team simply started to play on their potential and increased their awareness both on and off the ball in an aim to increase their accuracy and not only build their attacks better but also start to threaten the goal.

The midfielders looked rejuvenated, and their increased concentration immediately affected the team’s ability to progress the ball and take advantage of their chances. The huge gaps between the Liverpool players were minimised, while the more aggressive attacking positioning of Keïta and Alexander-Arnold immediately increased the team’s chances in attack and by pushing forward and pressing Estupiñán he limited the opposition’s impact on the flanks. Their more advanced positioning aimed to commit more bodies in attack and to provoke havoc in Villarreal’s defence. 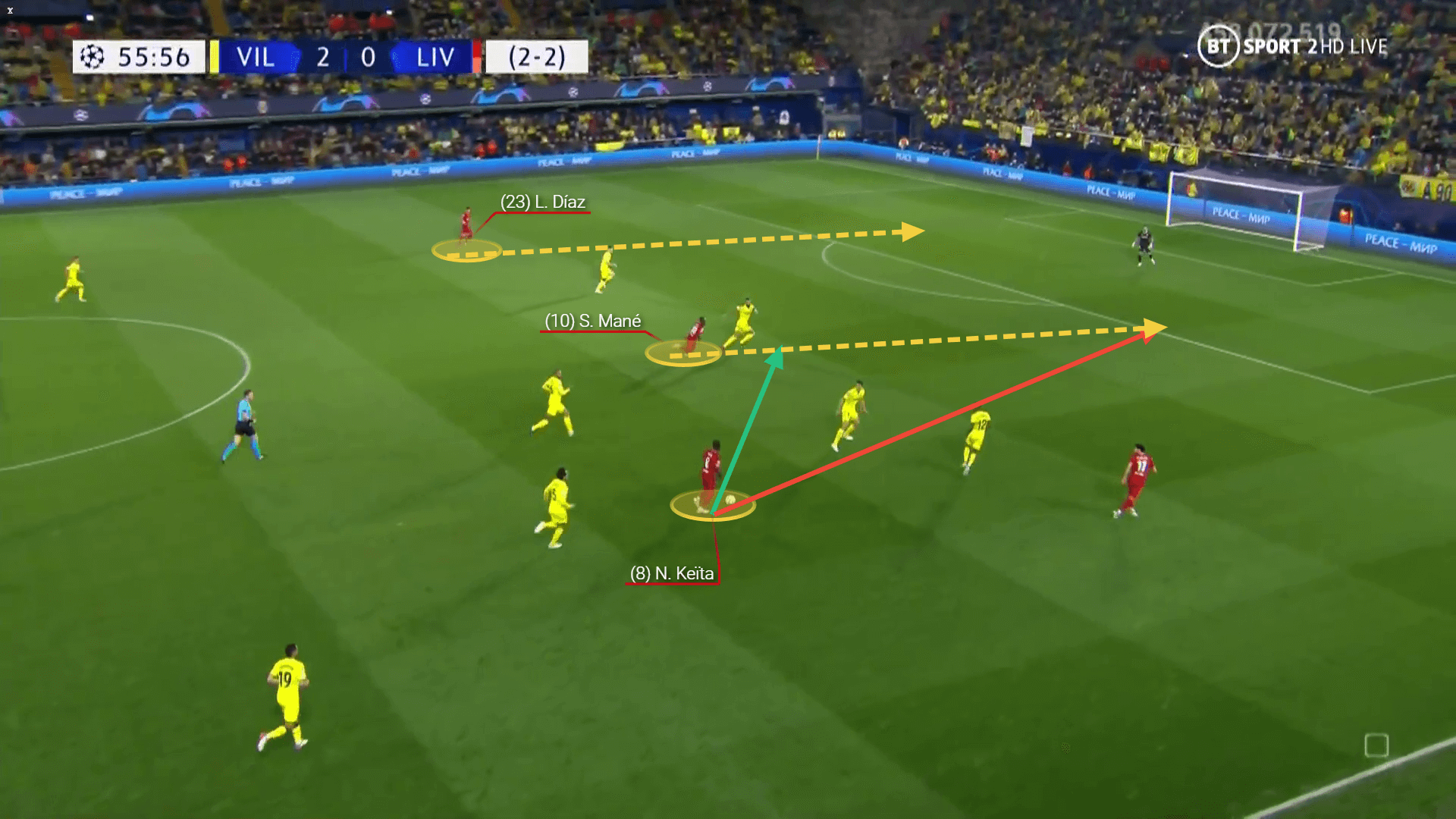 He then sends a well-measured through ball to Mane, directly to the box, instead of passing it to him and relying on his dribbling skills to take on the defender.But yet, Klopp’s early substitution had the biggest impact on the Reds’ performance. Luis Díaz once again proved that he is the perfect match for this Liverpool team and boosted their confidence in attack immensely. His drive to find the goal affected his teammates and inspired them to be more flexible in their movement, resulting in firing 13 shots in 45 minutes. Díaz’s smart positioning and pace increased the team’s creativity. His 5/7 successful dribbling attempts helped Liverpool in breaking through the defence, while his 90% pass completion rate showed his importance as a supporting system and not only a direct threat.

As our analysis showed, there are ways to block Liverpool’s efforts and trouble their actions in possession, but it is difficult to retain this high press intensity for the whole 90 minutes, especially lacking the squad depth for that purpose.

Villarreal showed character but it was not enough to outplay Liverpool once they collected and started playing on their potential. The lack of concentration could’ve cost a lot to Klopp’s side but their ability to quickly focus on the prize and get back on track has helped them to reach the Champions League final. There, they will meet Real Madrid, who kicked out Pep Guardiola’s Manchester City out of the competition.