Matchday 12 of the FAWSL delivered an interesting matchup between Chelsea Women and Bristol City Women. Chelsea currently sit just outside of Champions League qualification but have just acquired one of the best players on Earth in striker Sam Kerr. Bristol City sit just above the relegation zone but have given up the most goals in the entire league. Through analysis, we see that Chelsea employed aggressive positional tactics, while Bristol City chose a conservative counter-attacking approach.

Would the impending Chelsea juggernaut roll over the struggling Bristol City defence? This tactical analysis will look into exactly what happened.

Chelsea: switching the point of attack

With an arsenal of attackers adorning the team sheet, Chelsea manager Emma Hayes has the ability to employ a variety of attacking tactics depending on the opponent at hand. One week we see aggressive vertical combination play through the flanks. Another week we primarily see direct balls into space behind to darting strikers. This week we saw Chelsea employ an attacking structure meant to use the full width of the pitch to drag the Bristol City defensive block back and forth across the field.

By setting up an expanded and staggered team shape, Chelsea were able to play the ball to one side of the pitch without committing too many players to the flank. When the ball was played to a flank, the Bristol City defensive block would naturally drift to the flank as well to smother any potential Chelsea attacks. Chelsea would retain possession of the ball on the flank to draw in the Bristol City players as far as possible. Once the Bristol city midfield line and all but the far defender on the defensive line had been drawn away from the far flank and halfspace, Chelsea would look to switch the point of attack to the now open far flank.

Chelsea began using this tactic from the very outset of the match. In the fourteenth minute, we see that Chelsea have played the ball down the right flank. In this moment three Chelsea attackers are in the flank channel with little to no access to central areas through the halfspace. This is a major indicator that Chelsea are about to play over/around the Bristol city block and not through it. 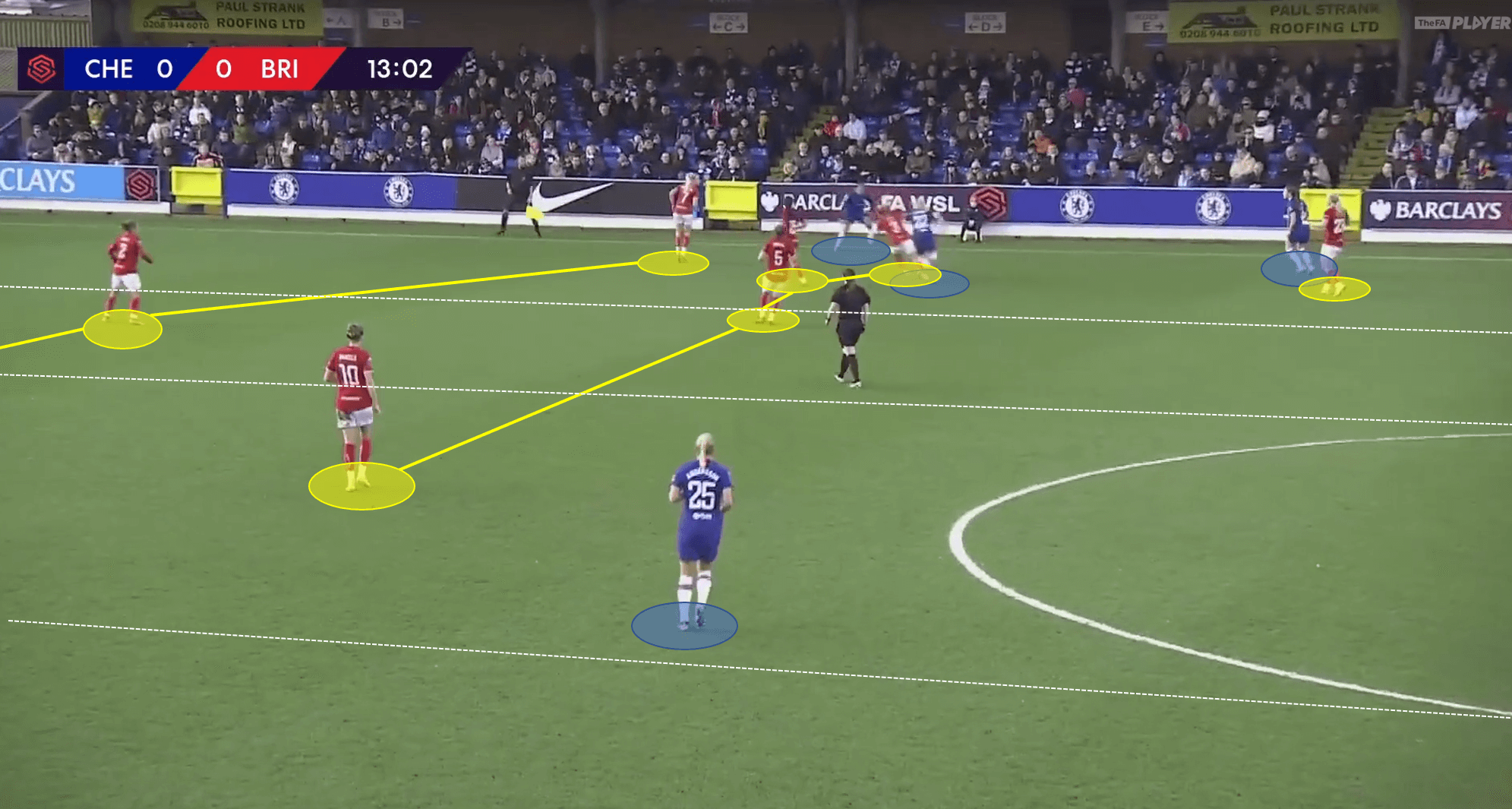 Once most of the Bristol block has been drawn to the right side of the pitch, Chelsea play the ball backwards to Sophie Ingle who is waiting in the right halfspace. Ingle immediately plays a diagonal cross to the left flank.

As the ball arrives, we see that Ji So-Yun is completely isolated on the left flank with the ball arriving at her feet. Guro Reiten has pushed in the now large gap between the Bristol City right-back and centre-back. Chelsea suddenly have a 2v1 situation in the attacking third with two of their most dangerous players. 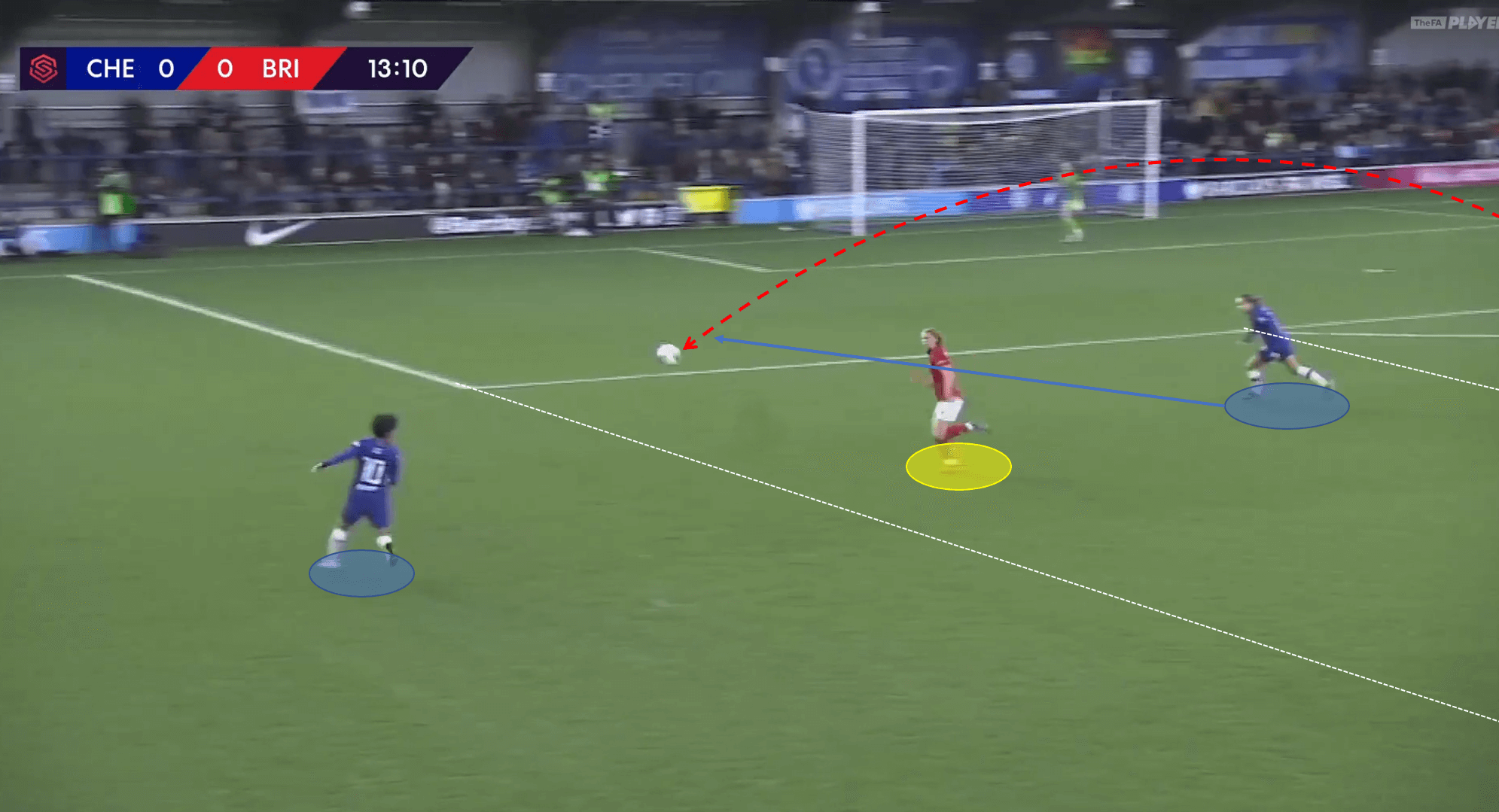 A very similar circumstance plays out later in the twenty-ninth minute. Once again, Chelsea have pushed three players high up the right flank. The Bristol City block has been drawn to the right side of the pitch, which is a cue for Chelsea to play the ball backwards to set up a diagonal cross. 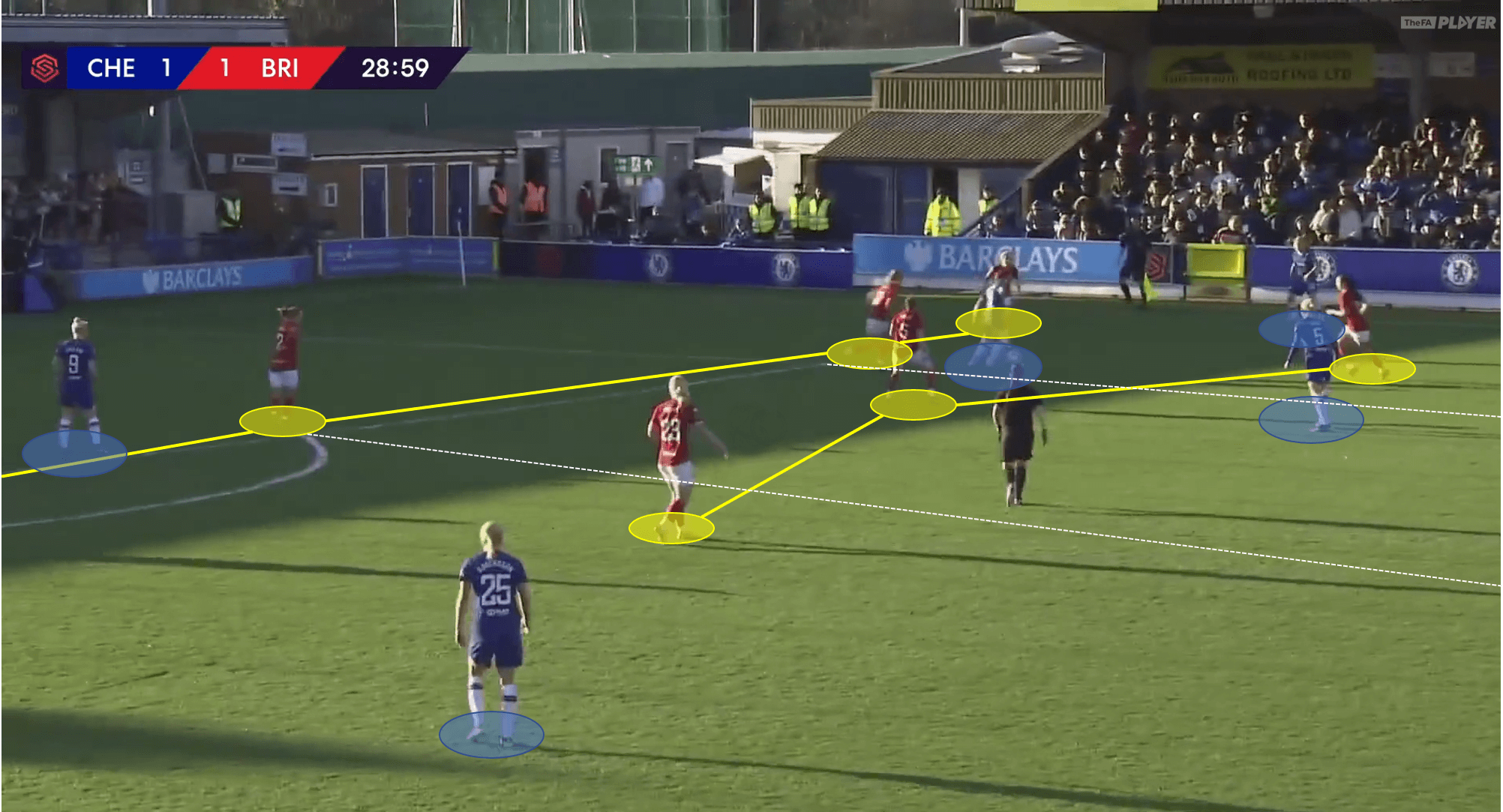 In this instance, Reiten is the player waiting in the far flank, with Jonna Andersson waiting to penetrate gaps in the halfspace. Unfortunately for Chelsea the cross is miss-hit and the ball never makes it to the awaiting Reiten. In this moment Andersson moves back to a central position while the ball is in the air to prevent a potential counter-attack.

It should also be noted, Chelsea attempted to switch the point of attack many times throughout the match. The positional principles were the same, but the personnel in the positions were different in each scenario. This is an important detail that will be discussed below. 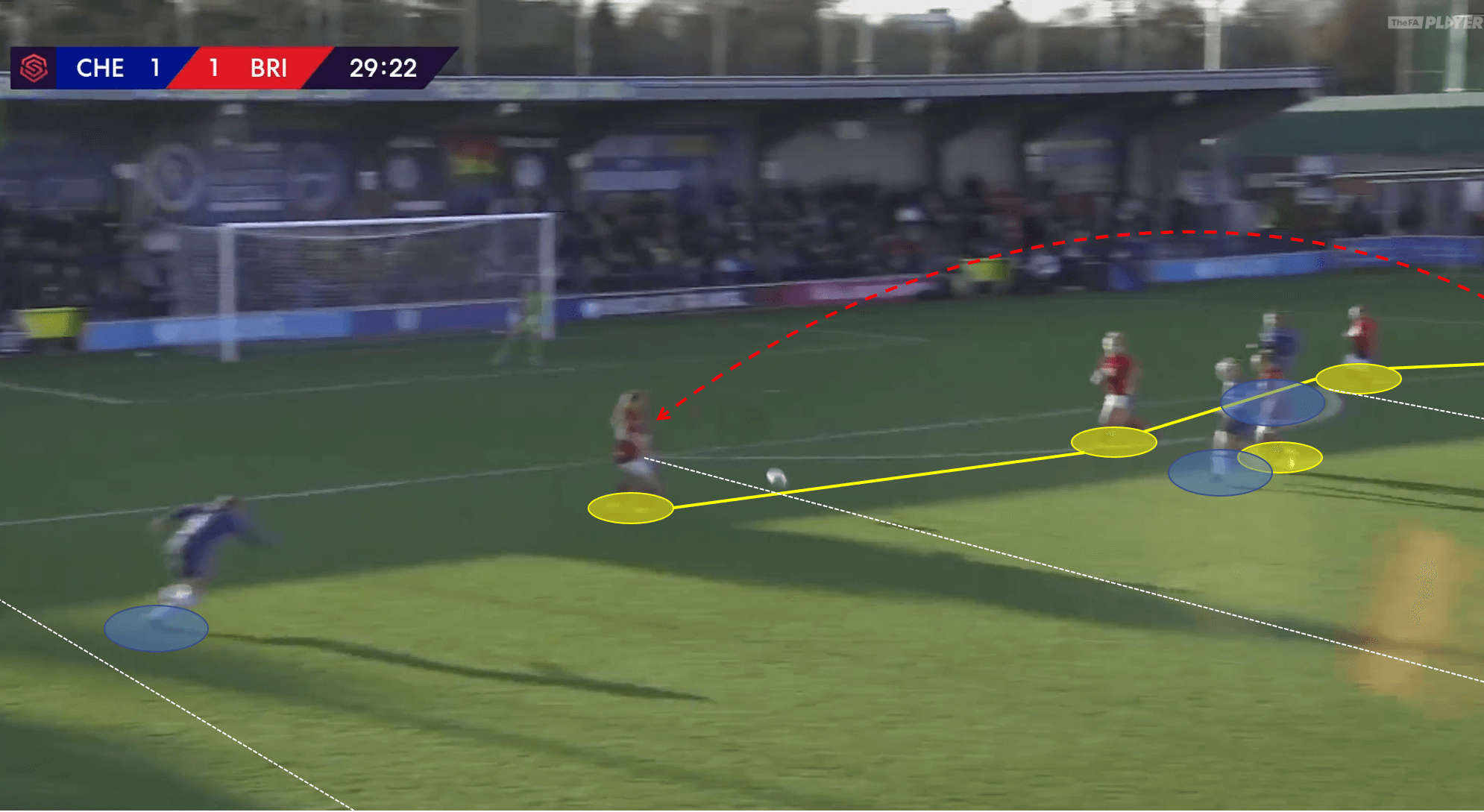 Chelsea clearly sought to shift the Bristol City block horizontally across the pitch to create attacking space on the far side. We can see that this did not work perfectly every time, but the tactic did create many quality chances on goal.

Bristol City entered the match with a priority of staying compact when out of possession and refusing to allow Chelsea time or space with the ball in advanced areas of the pitch. Although this is an entirely legitimate defensive tactic, it hinders what the team is able to do when transitioning into the attacking phase. This led Bristol City to engage in quick and direct counter-attacks when attacking chances arose.

When gaining the ball Bristol City sought to immediately play the ball forward into space behind the Chelsea defensive line. Chelsea typically play with a high defensive line and Bristol City manager Tanya Oxtoby aimed to exploit this vast amount of space with aggressive runs from 18-year-old strikers Elise Hughes and Ebony Salmon.

Oxtoby directed the strikers to play in a way that suited both of their attacking and physical attributes. Salmon, who is shorter and speedier, would commit sprinting runs towards the flank upon Bristol City gaining possession. Hughes is a former centre-back who came through the Everton youth system and recently transitioned to the striker role. She brings an aerial advantage and a strong knowledge base of how to torment opposition defenders. She was tasked with making central runs towards the 18yd box.

Although Bristol City had relative few chances on goal, almost all of them came through the counter-attacking runs of Hughes and Salmon.

In the ninth minute, we can see that Bristol City have just received the ball on the right flank. Immediately, Salmon and Hughes turn upfield and make their designated runs. Salmon can be seen streaking towards the corner flag with a slightly diagonal run.

Hughes can be seen completely turning her back on the ball. This shows that the strikers are well aware that time is one of the most important factors in a successful counter-attack. They both know that the ball is going to arrive into space in front of them. It is up to them to be able to arrive in that space as quickly as possible. 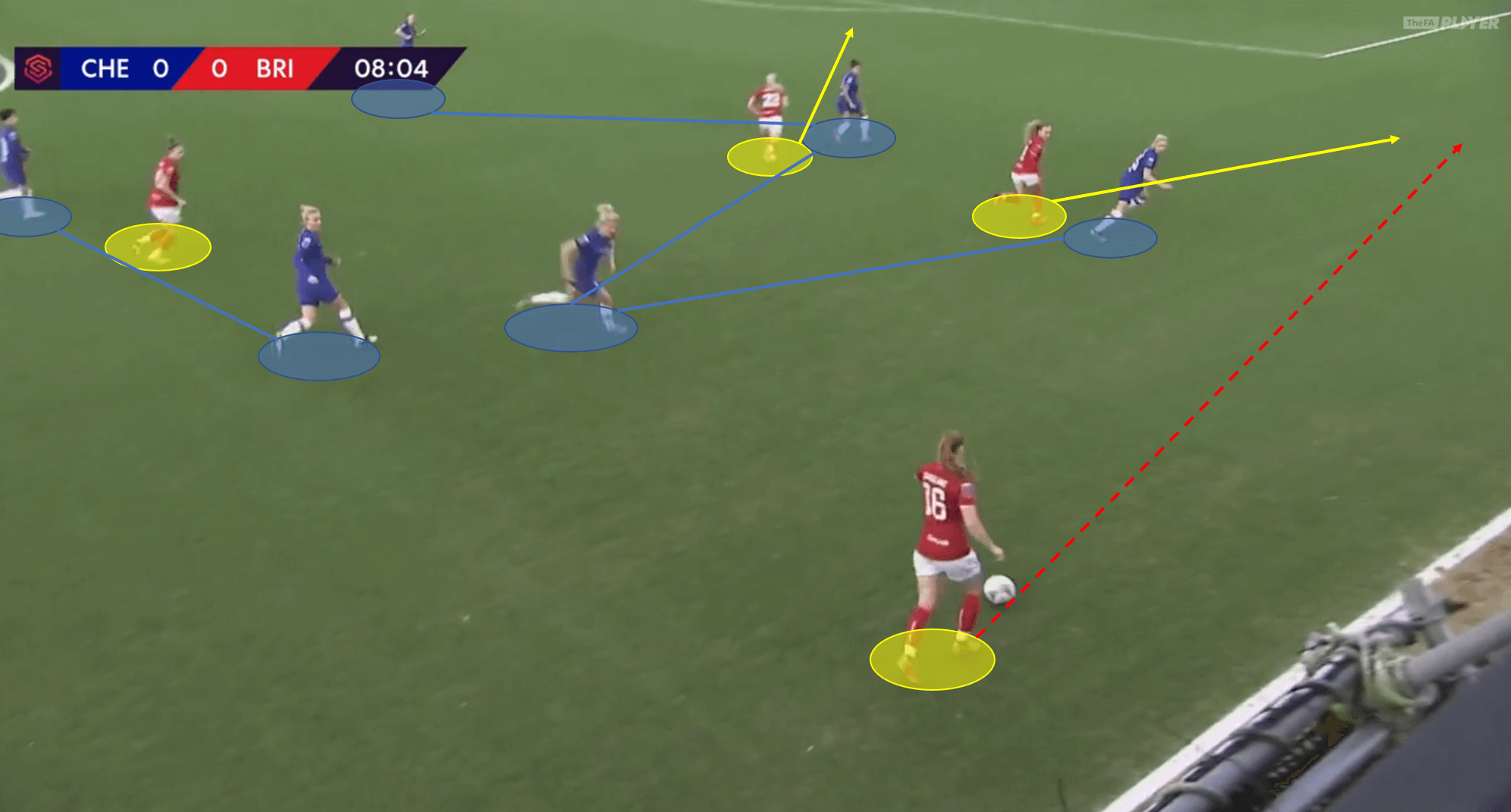 In the twenty-third minute, we see a similar scenario play out. Although, in this case, Hughes has aligned herself much deeper in the defensive phase. This leaves her with much more space to cover upon Bristol City recovering the ball. This ball is played to Salmon, but is easily snuffed out by the Chelsea backline. 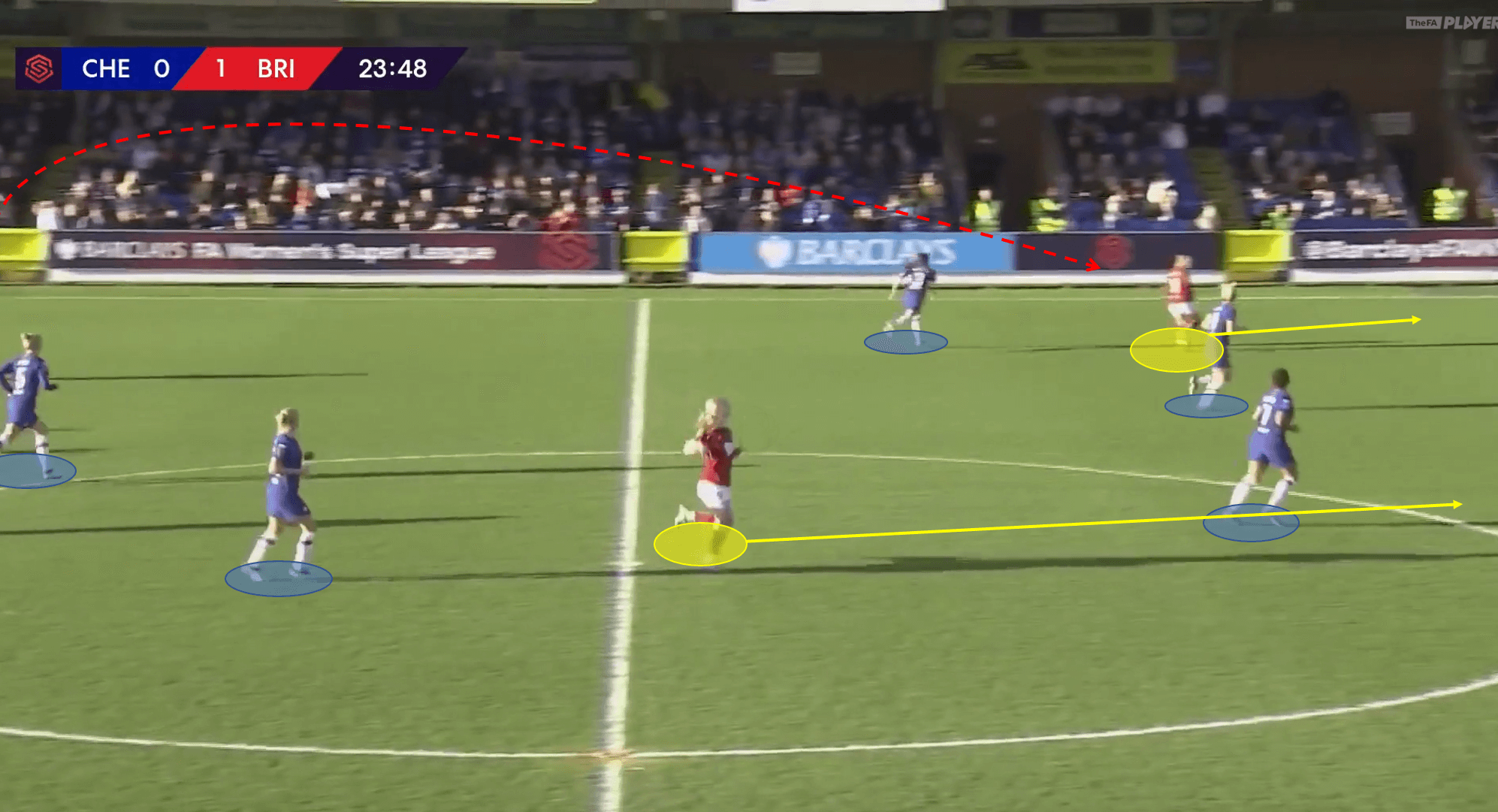 Bristol City attempted to harass the Chelsea backline with direct and aggressive runs when gaining possession of the ball. Unfortunately, Bristol City saw little positive gain from this tactic, creating only four shots on target throughout the entire match.

A consistent tactic that has developed throughout the current FAWSL campaign is Chelsea’s use of positional play tactics. Hayes seeks to allocate a consistent attacking structure throughout a match but offers the flexibility of player interchanges within the structure. This leads to Chelsea players taking up advantageous positions in attacking phases of the match, but the players in each position could be different each time.

By utilising player interchanges, opponents are not easily able to use player to player marking schemes. Many player-to-player marking schemes have defending players assigned to an individual opponent to mark and shadow when their team is out of possession. Player interchanges allow attacking teams to drag defending players out of their position with off the ball movements. This can allow an attacking team to misshape an opponent’s defensive block while completely retaining their attacking structure.

Chelsea allocated player interchanges while also using a positional attacking diamond in the centre and halfspaces. This also allowed Chelsea to freely position players on the flanks to provide attacking width. This proved to be quite effective.

When aiming to enter Bristol City’s 18yd box, Chelsea attackers formed a diamond shape in between the Bristol City defensive and midfield lines. A striker would align on the offside line between the two centre-backs, effectively pinning the centrebacks in position. Two more Chelsea attackers would form the width of the diamond by moving between the defensive and midfield lines and remaining in between City’s outside backs and centrebacks. Finally, the base of the diamond would line up in the central channel and typically just off the shoulders of the opponent centre midfielders. This shape had many advantages.

First off, the centrally positioned diamond would force Bristol city to react in either two ways: A) they could leave the central Chelsea players to roam between the lines. This is obviously very dangerous and would lead to Chelsea attackers receiving the ball in space between the lines. Or B) Bristol City could constrict their defensive and midfield lines to take away space from the Chelsea attacking diamond. Bristol City usually chose to go with choice B.

Once Bristol City drew their defensive unit centrally to take away space from the Chelsea diamond, Chelsea would enact a second tactic to the attacking structure. Upon Bristol City contracting their unit centrally, Chelsea would release wide attackers to occupy each flank, which were now completely empty. This allowed Chelsea to have an attacking presence in all five channels in the opponent’s attacking third. As you can imagine, Chelsea’s aggressive positional structure paired with positional interchanges created many problems for Bristol City.

In the thirty-fifth minute, we can see that Ji has received the ball in the left halfspace. At the moment, England is moving into her position at the top of the attacking diamond. On the right flank, Chelsea right-back Hannah Blundell has recognized that Bristol City has committed to covering the central channel and halfspaces. Blundell advances forward to the offside line to create an attacking option in the right flank.

Off-camera, Andersson has made the same movement and has advanced high up the left flank. Notice that in this scenario, the central diamond is made up of Spence, Cuthbert, England and Reiten 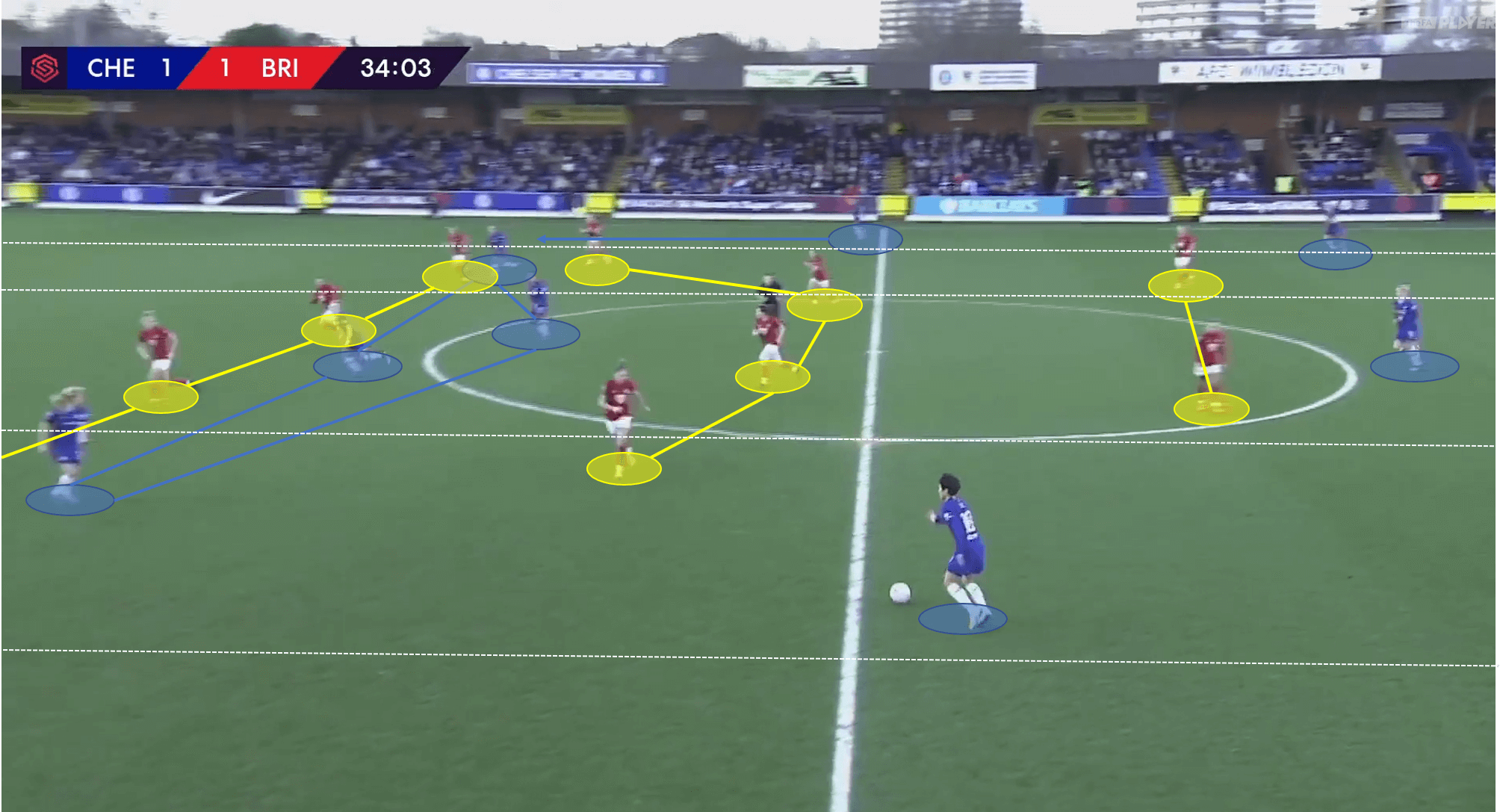 Later, we see a very similar scenario play out. The positional principles are exactly the same, a tight central diamond that poses a threat but also creates space to attackers on the flank. A key difference is that many positions are now occupied by a different player. Ji is now high up the left flank. Spence is now in the attacking diamond. Ingle, at the base of the diamond, is now in a position to be an attacking threat as well.

Chelsea allocated the use of positional play with player interchanges constantly throughout the match. Chelsea also executed these movements in a very seamless way. All attacking movements were conducted at a high speed and proved to be very difficult for Bristol City to overcome.

In the end, Chelsea walked off the pitch having created twenty-eight shots (fourteen of them on target) which led to a 6-1 victory. Although it took a little time, the Chelsea machine eventually came alive and at one point scored three goals in seven minutes. Chelsea move forward with a fair amount of confidence knowing that they might just be getting started and sit four points from first place.

Bristol City leave the pitch with more questions than answers. They now sit just above the relegation zone, but with the worst goal differential in the league by ten goals (negative twenty-eight).