AC Milan 2019/20: How Pioli can improve them tactically – scout report

AC Milan have had a shocking season so far this term. After appointing Marco Giampaolo as the head coach on the back of his excellent tenure at Sampdoria, a disappointing start to the campaign saw him sacked in early October. Stefano Pioli, the former Lazio, Inter and Fiorentina coach, was swiftly brought in, but the team has continued to struggle under his leadership too. Currently, Milan are sat in 10th place in the Serie A table. Following the signing of Zlatan Ibrahimović and the win against Cagliari at the weekend, some optimism is finally building at Milanello. Still, there are lots of improvements needed if Milan are to make a push for European football in the second half of the season. This tactical analysis scout report will discuss some different solutions Pioli could implement to improve Milan tactically.

Whisper it quietly, but the Milan squad is actually quite good. Their recruitment over the last few years has in fact been very clever. The problem has been that their coaches haven’t been able to get the best out of the options at their disposal. Vincenzo Montella, Gennaro Gattuso, Giampaolo and now Pioli have all had their chance but failed to make the most of a talented squad. In fact, Pioli has the worst win-ratio of them all so there is definitely a pressing need for Pioli to change something.

Looking at the squad, they have an excellent goalkeeper in Gianluigi Donnarumma. They have some of Italy’s most interesting full-backs as well with Andrea Conti, who impressed immensely at Atalanta and the homegrown Davide Calabria on the right while also possessing the excellent Spaniard Theo Hernandez and the experienced Ricardo Rodríguez on the left.

At centre-back, Alessio Romagnoli is an Italian international who has impressed for club and country while Mateo Musacchio is an experienced centre-half. Mattia Caldara has just left after a disappointing spell where he failed to nail down a spot in the team as he was expected to after his tremendous emergence at Atalanta. He has been replaced by Simon Kjær who will bring more experience. Additionally, Léo Duarte looks likely to become an important member if he is given the chance to establish himself.

In midfield, Ismaël Bennacer and Rade Krunić were two promising signings in the summer, with Bennacer, in particular, a very intriguing prospect at the base of midfield with his progressing passing and ability to break lines by dribbling the ball forward. He has looked promising, but there is surely more to come from him. Franck Kessié remains a very good midfielder while there are plenty of talented playmakers such as Lucas Biglia, Giacomo Bonaventura, Hakan Çalhanoğlu, Lucas Paquetá, and Suso.

In attack, Krzysztof Piątek looks likely to leave following Ibrahimović’s arrival, but the Swede’s ability to lead the line as well as drop deep to link play make him a good addition also if the Polish striker remains. Around them, there are options of plenty of pace and trickery in players like Samu Castillejo, Rafael Leão and, especially, Ante Rebić. As you may realise, the squad is good and capable of playing in different ways if coached well.

Milan have mostly set up in some variant of 4-3-3 under Gattuso, Giampaolo (4-3-1-2 or 4-3-2-1) and Pioli but the common theme has been a lack of pace. Suso and Çalhanoğlu are good at coming inside to create options between the lines and link play but, with them as wingers, Milan have often lacked players making runs into depth. That is something that has to change now that Ibrahimović has joined since the 38-year-old won’t provide the threat in-behind that all teams need. As mentioned, though, the likes of Leão and Rebić can provide that.

Pioli could opt to stick with the 4-3-3 that becomes a 4-5-1 in defence. That would mean the excellent back-four of Calabria, Musacchio, Romagnoli and Hernandez remains while a midfield three of Bennacer, Kessié and Bonaventura sounds good. Paquetá could be preferred to Bonaventura, as could Çalhanoğlu, but the Italian’s overall contribution is probably greater in a deeper position. Either side of Ibrahimović, Leão and Rebić would provide runs in-behind with the two full-backs pushing on down either side. This would make Milan a more dynamic and energetic team with more cutting edge and more runners in the attack. 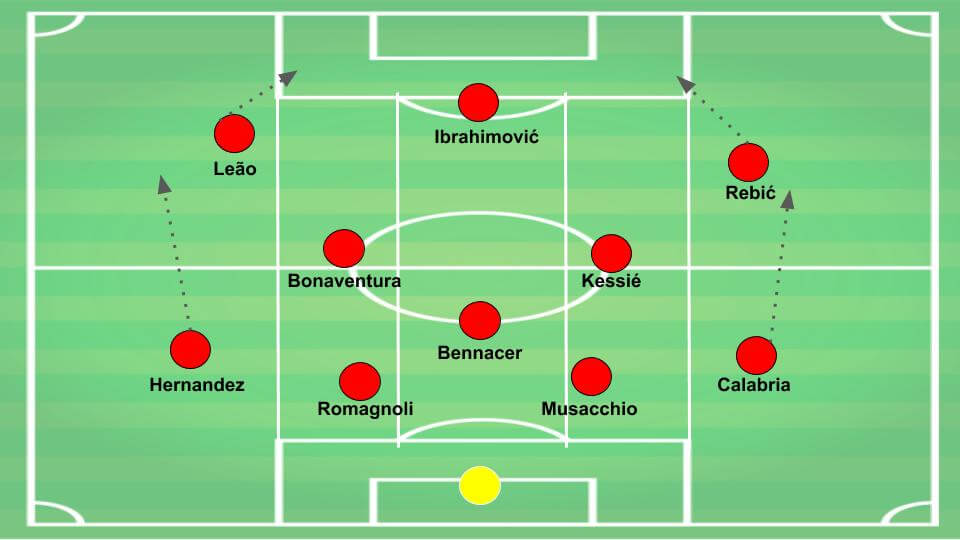 We saw an example of Leão could play off the left with the way he cut inside and played a great cross for Ibrahimović whose header was tipped onto the post. Overall, this option makes a lot of sense given this is how Milan have largely setup but with creators rather than runners in the wide positions, which have often made Milan’s attacking structure very crowded and bereft of threatening runs and movement around the penalty area.

If Pioli would decide to abandon his 4-3-3, Milan have a squad capable of morphing into a 3-4-3 instead. The new signing Kjær has hardly played at Atalanta so is perhaps not ready to slot in straight away, but the Dane could definitely play as the central centre-back in a three. Additionally, Calabria could act as the right-sided centre-back with the responsibility of progressing the ball forward by dribbling, leaving Conti to patrol the flank. On the opposite side, Hernandez is perfect for a more advanced position. Kessié and Bennacer would make up the double pivot, and Paquetá or Suso could be used as an attacking midfielder in the right-sided half-space. With Ibrahimović the focal point in attack, Rebić would be played inside-left to attack with runs in-behind while adding more dynamism to the side. Of course, this role could also be played by Leão.

As seen below, this structure would give Milan good coverage of the different vertical and horizontal channels which hopefully would see their attacking play improve. That is crucial, given that they’ve only scored 18 goals in 19 league games with only Udinese and the two bottom teams Brescia and SPAL scoring less. 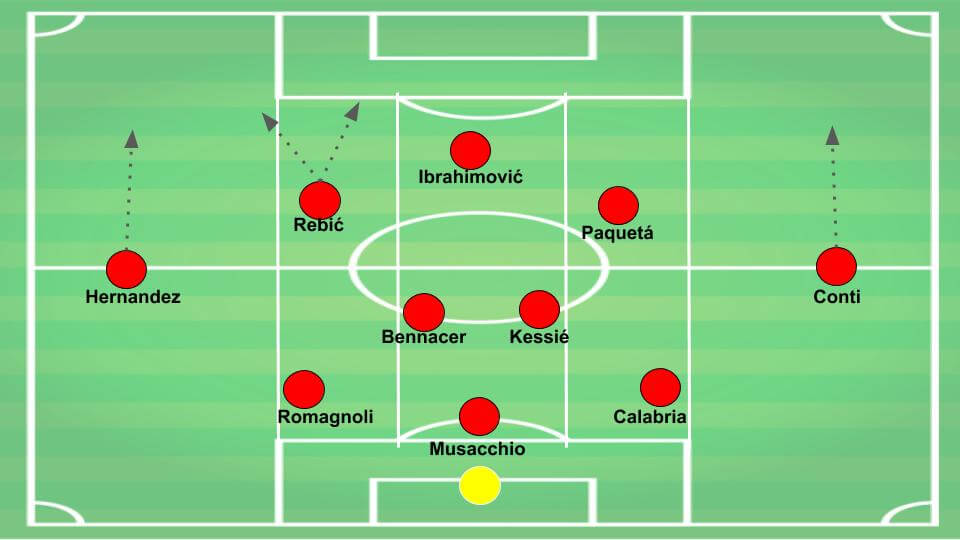 It would be a big change to start playing with a back-three all of a sudden, but Pioli could use the structure presented above only in attack while continuing to defend with a back-four. That would be created with Calabria moving out to defend as a right-back with Conti in front of him as a right-sided midfielder. On the opposite side, Hernandez would drop back into the back-four while Rebić would act as the left-sided midfielder in a 4-4-1-1. This would make Milan’s defensive shape, which has been quite good if we overlook the Atalanta defeat, retain a familiar setup even though the attacking structure would change. 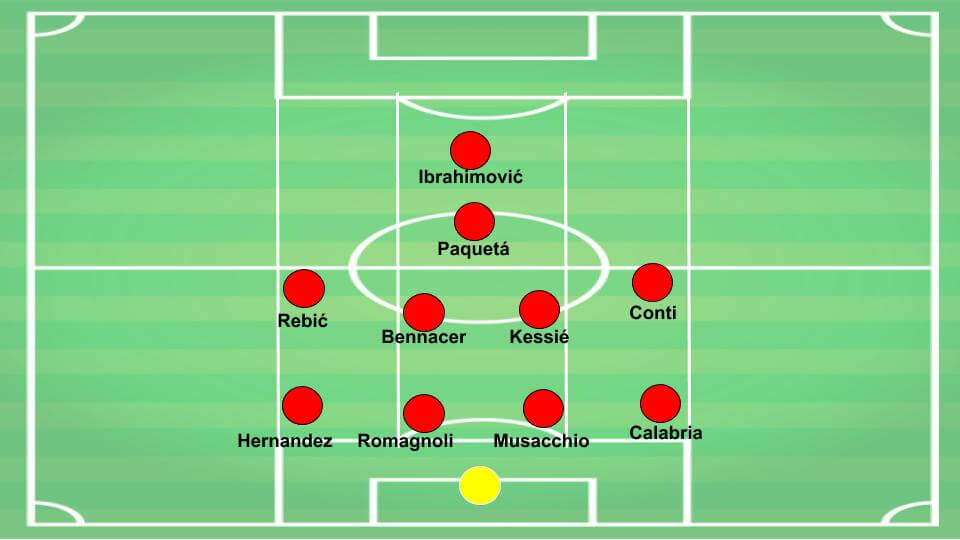 A similar option would be the structure suggested in the image below, the 3-4-1-2. This would be more of a counter-attacking setup with Rebić playing a role more similar to the one he had at Eintracht Frankfurt where he would play off two strikers. Here, Ibrahimović would have Rebić and Leão around him while the wings would still be attacked by Conti and Hernandez. It would probably make Milan lethal on the break, but it would be more difficult to control possession in central areas without a third midfielder in there. However, Milan would be very dynamic with the runs of the Croatian now coming from very central areas. 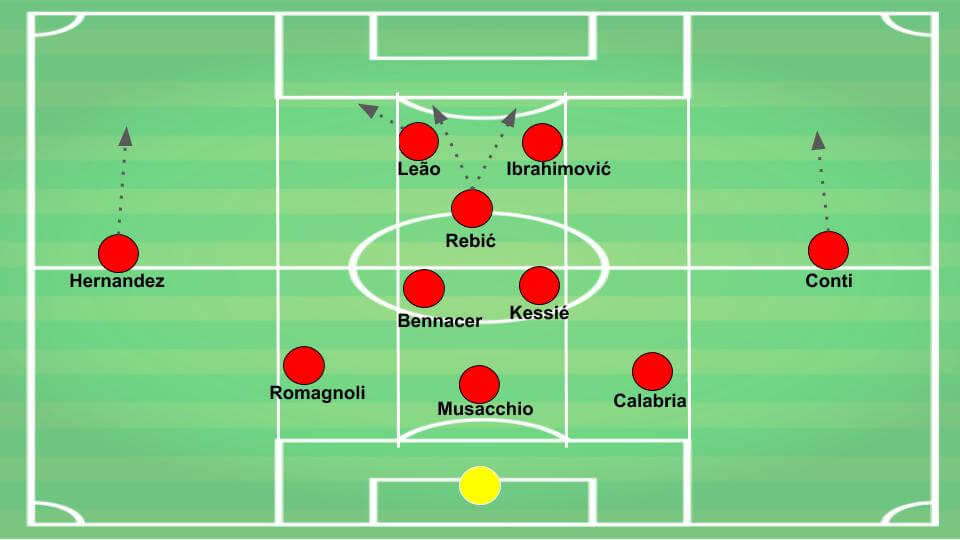 My fourth and last option would be a more pragmatic approach aimed at dominating possession in central areas while having the two full-backs attack the wide areas and provide crosses for Leão and “Ibra”. This setup would include Suso or Paquetá on the right cutting inside and Bonaventura or Çalhanoğlu doing the same on the left. It would probably be more solid and provide more stability in defence than if they change into a completely new shape. Also, it would suit some of their more senior players by getting them into positions and roles where they are comfortable. 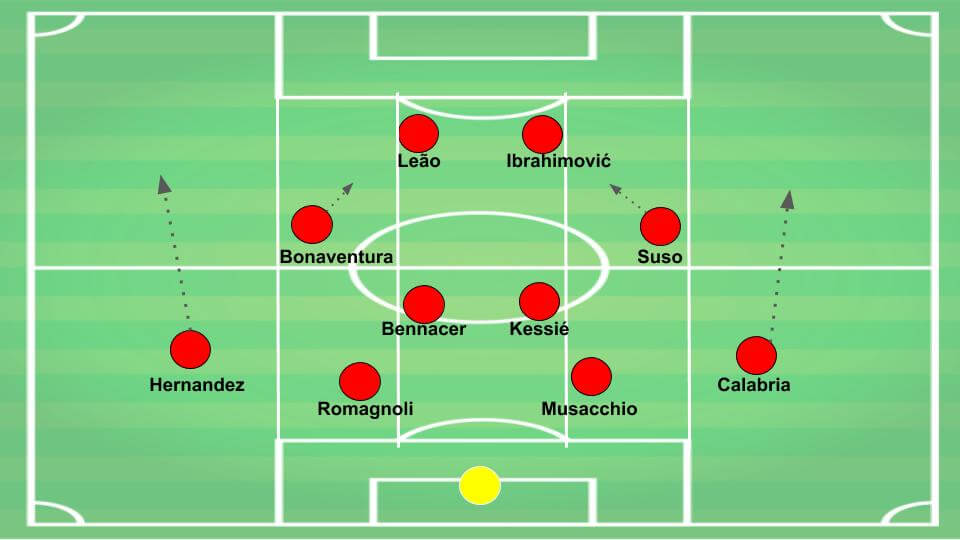 It should be noted, however, that Ibrahimović has rarely played in a two-man attack to great effect since he has often played as a lone striker, making himself the sole focal point of his teams’ attack. A partnership with the young Portuguese forward could blossom, of course, but it may not prove to be the best way forward for AC Milan.

As this analysis has shown, there are a number of ways for Pioli to improve Milan’s tactics in the second half of the season. One thing that seems obvious is that he needs to inject more energy and pace to the attack, especially around Ibrahimović as he will now be the focal point of Milan’s attacking play. The Swedish veteran thrives with movement around him, so whichever structure Pioli ends up using, movement around Ibrahimović must be the priority. Then, Milan can definitely improve enough to get the goals their attack sorely needs to provide.