Brighton and Hove Albion Women hosted Arsenal Women in the second FAWSL fixture of the new year. Arsenal Women are at the top of the FAWSL league table while Brighton Women sit in ninth place. In this game, we saw the away side completely dominate the game utilizing an unorthodox tactical system. By pulling off this win and three points, the north London side proved tremendous tactical versatility and positional intelligence of their players. By taking a deeper look at their tactics in this tactical analysis, we shall examine how both teams played out in an analysis of this fixture.

Joe Montemurro rolled back the years by playing Herbert Chapman’s legendary W-M formation with Arsenal Women. The decision to play a 3-man defence was perhaps with an objective to rotate the squad with an opportunity against a team like Brighton, but the result was a 3-2-2-3 formation that was totally unorthodox and caught the home team by surprise.

The defensive line of three looked more like a single centreback system than the usual three centre-halves. Schnaderbeck and Williamson were expected to play wider as fullbacks, leaving only Quinn in the centre. A double-pivot of Little and Wälti sat in front of the defensive trio to drop deep and receive the ball in the buildup, as well as slot in between the back-three if necessary as an additional defender. In this graphic, we see Wälti’s role as a standby centreback on defensive transitions which allowed Schnaderback and Williamson to stay wide and attack the inner and outer channels. 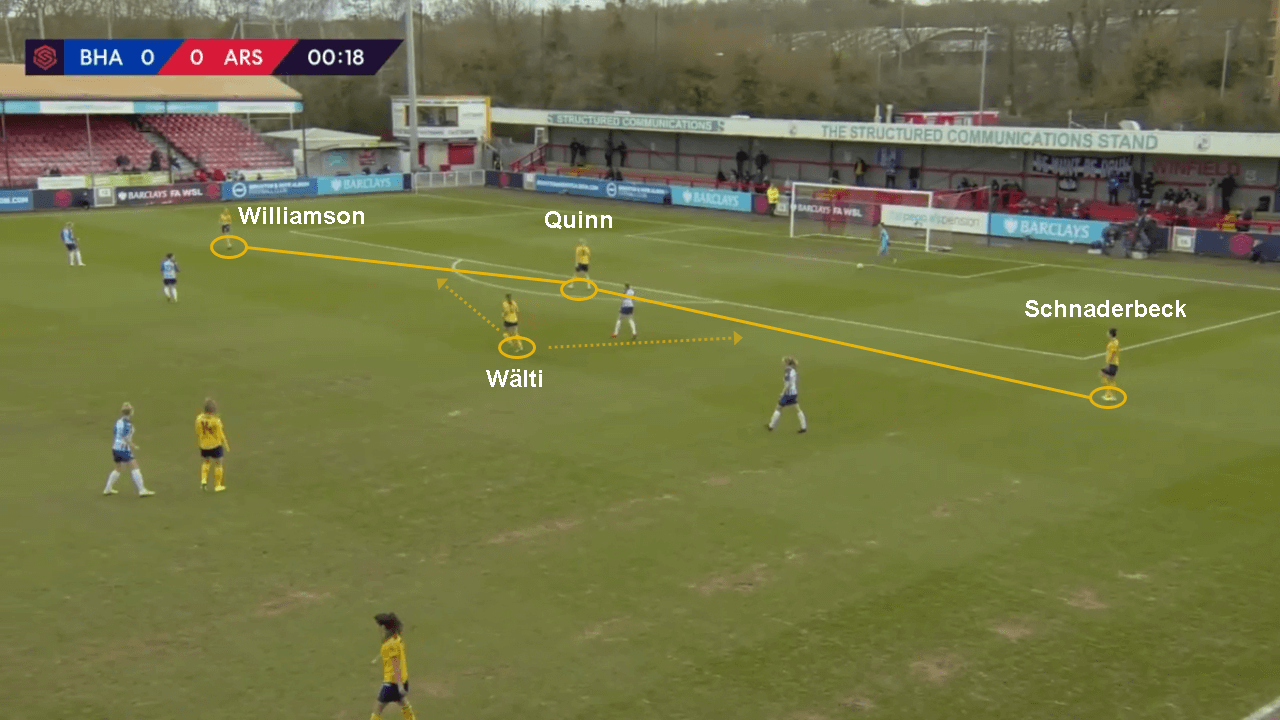 The midfield worked more like a diamond in a 3-4-3 formation with Roord, Nobbs and Little having more attacking responsibilities. Miedema was the lone striker to push Brighton’s high defensive line back and van de Donk and Evans would operate on the wide channels providing width to the formation. This system also implied that Arsenal did not have any dedicated wingbacks and the responsibility of attacking and defensive transitions on the flanks would have to be shared by van de Donk and Schnaderback on the left-wing, and Evans and Williamson on the right-wing.

As anticipated, Arsenal were very efficient in moving the ball quickly with short passes, circulating possession and finding opportunities to put Brighton on the back foot. The success of the system that Arsenal deployed could be attributed to the quality of their players and the excellent positional sense to move into the right spaces at the right time.

A possession tactic commonly seen in Arsenal’s attacking organisation is the use of vertical passing to break defensive lines of pressure. This was where having four central midfielders in Nobbs, Little, Roord and Wälti gave them an advantage despite having no wide midfielders or fullbacks. The midfielders created triangles and opened up passing lanes to move the ball effectively.

In this graphic, we see a typical pattern of passing how Arsenal circulate possession in the middle. Roord who is under pressure and in possession of the ball lays it off to Wälti. While the ball is moving backwards, Nobbs with her excellent game intelligence is able to identify a pocket of space opening up as the Brighton players are attracted towards the ball. Wälti is then able to play a penetrating pass to Nobbs between the lines and attack Brighton vertically through the centre.

Montemurro’s plan to use a 3-at-the-back system was with the anticipation that Hope Powell would line-up the home side in a 5-4-1 formation. Instead, Brighton started off playing a 4-5-1 formation.

The defensive back four kept a high line to close down the space for Miedema and Nobbs. In the midfield, we saw Le Garrec play a more central role with responsibilities as a pivot, while Bowman and Nilden had the license to put pressure further up the pitch alongside Simpkins and Whelan. The objective was to close down the spaces through the centre.

Arsenal generally play a positional game with lots of possession involving short passes to break lines of pressure. Having five midfielders close these spaces would allow Brighton a chance to immediately win possession in the opposition half and engage in a counter-attack. Green was the sole striker up top to begin pressuring Arsenals back three.

The problem was that the 4-man defence looked disconnected from the rest of the team shape. Although they kept the line high and tight, Brighton lacked the coordination from the defence of knowing when to push up or drop back. They also had major issues shuffling across the pitch to cover the spaces on the wings which Arsenal ruthlessly exploited.

Arsenal’s exploitation of the wing

Although Arsenal did not have dedicated wingbacks, they were able to exploit the spaces on the wide channels using the long ball. The first goal by van de Donk came as a result of a long ball played by Williamson from the right inner channel to the left outer channel. The defensive line was caught very high up and van de Donk’s pace managed to beat them and single-handedly put the away side in front in the early minutes.

In this graphic below we see another similar ball being played to van de Donk after they scored from this action. Here Barton reads the long ball and breaks away from the high line to drop back and intercept. But these long balls played into the wings disrupted Brighton’s defensive discipline of keeping the line high, close to the halfway mark.

While defending, Arsenal applied pressure keeping the wingers tucked in compactly. Brighton were simply unable to play the ball out from the back in every attempt. Each time they ended up conceding possession or sending the ball out of play when the ball reached the fullbacks on the wide areas. This was a result of Arsenal’s high man-oriented press.

We can see here an example of how they begin to pressure right from the top with Miedema leading the press and van de Donk, Nobbs and Evans following closely in shape. Since van de Donk was the only wide player on the left for Arsenal when she moved centrally like this the responsibility to defend Brighton’s wide players fell on Schaderback. If Schaderback got pulled out wide towards the sideline, Wälti needed to drop to cover as a centre half.

This was a risky strategy, but Arsenal managed to handle defensive transitions without much trouble during the game because Brighton were not effective in exploiting the wide areas behind Arsenal’s defence.

Apart from Brighton’s shortcomings with the back-four, their major setback during this game was that they allowed Arsenal a lot of space to build up from wide areas despite playing with a line of five midfielders. You’d expect a line of five to cover a good width of the pitch making it hard to play through the wide channels without fullbacks, but Brighton’s five midfielders prioritized closing the spaces in the middle and staying compact. This strategy gifted Arsenal plenty of room on the wide channels.

Arsenal’s back three were able to spread out covering the width of the pitch without risk of being penetrated. Moreover, Schnaderback and Williamson performed the roles of fullbacks driving forward in the half-spaces and wings looking to play the dangerous ball behind Brighton’s defensive line

In this graphic, we see how Brighton conceded the second goal. Notice how Williamson has drifted wide and pushed up so high into Brighton’s half. Evans, the winger in front of her manages to draw Williams and Gibbons to the right. Van De Donk and Miedema pin back Barton and Kerdijk. This splits open Brighton’s defence and Roord finds a golden opportunity to sneak up into that space left in the middle. It was Williamson, the centre half who provided the assist to Roord with a perfectly timed long ball.

It should be unacceptable for Brighton’s midfield line of five to give so much time and space for a defender from an opposition’s back three to easily provide an assist from their own half. Arsenal scored the third and fourth in a similar manner exploiting gaps in Brighton’s defence in front of their penalty box. This explains Brighton’s crucial problems during the game.

How Brighton coped as the game progressed

Powell made changes to Brighton’s defensive organisation so as to pressure from the front with two instead of one. This created a 3v2 situation for Arsenal while playing out from the back, which was trickier than the 3v1 at the start of the game. The visitors were automatically pressured to play more number of passes to progress out of their defensive third.

The result of the change in their pressing system also forced Schnaderback and Williamson deeper and closer to Quinn neutralising their threat. In the second half, we saw Wälti spending more time building up as the last defender. Having at least four players in the centre always allowed Brighton to deny numerical superiority for Arsenal in midfield.

The defence was more alert and played the line a lot less high than in the first half. What Brighton failed to do after going down by three goals was take risk and press more aggressively from the front. Arsenal’s system created many opportunities for Brighton to exploit the spaces between Arsenal’s defenders and put them on the back foot on defensive transitions as they would lack a solid structure to prevent the through balls. We saw one opportunity that Brighton created in this way which provided a scare for the league leaders, but they needed to push their luck more with counter-attacking threats.

Arsenal were by far the better team despite playing a system that had its fair share of risks. The ability to win the game by a four goal margin and a clean sheet demonstrates superb tactical flexibility in Montemurro’s game model and the class of players like Nobbs, van de Donk, Williamson and Roord. Brighton were outplayed in the wrong areas giving them little chance to exploit Arsenal’s weaknesses tactically in this game. With this result, Arsenal stand three points clear of Manchester City in the FAWSL table.