At Štadión Anton Malatinský in Trnava, Slovakia and Wales met in a heated European Championship qualifying match. The Welsh had won the last three meetings between the two sides, including a 1-0 victory back in March in the current qualifying round. The lone goal in that match came at the end of a quick, direct attack finished by Daniel James. This time around, however, both teams left with a point, though the tactical concepts and emphases were similar.

This tactical analysis will dissect the tactical approach of both Slovakia and Wales and how they adjusted throughout the match. 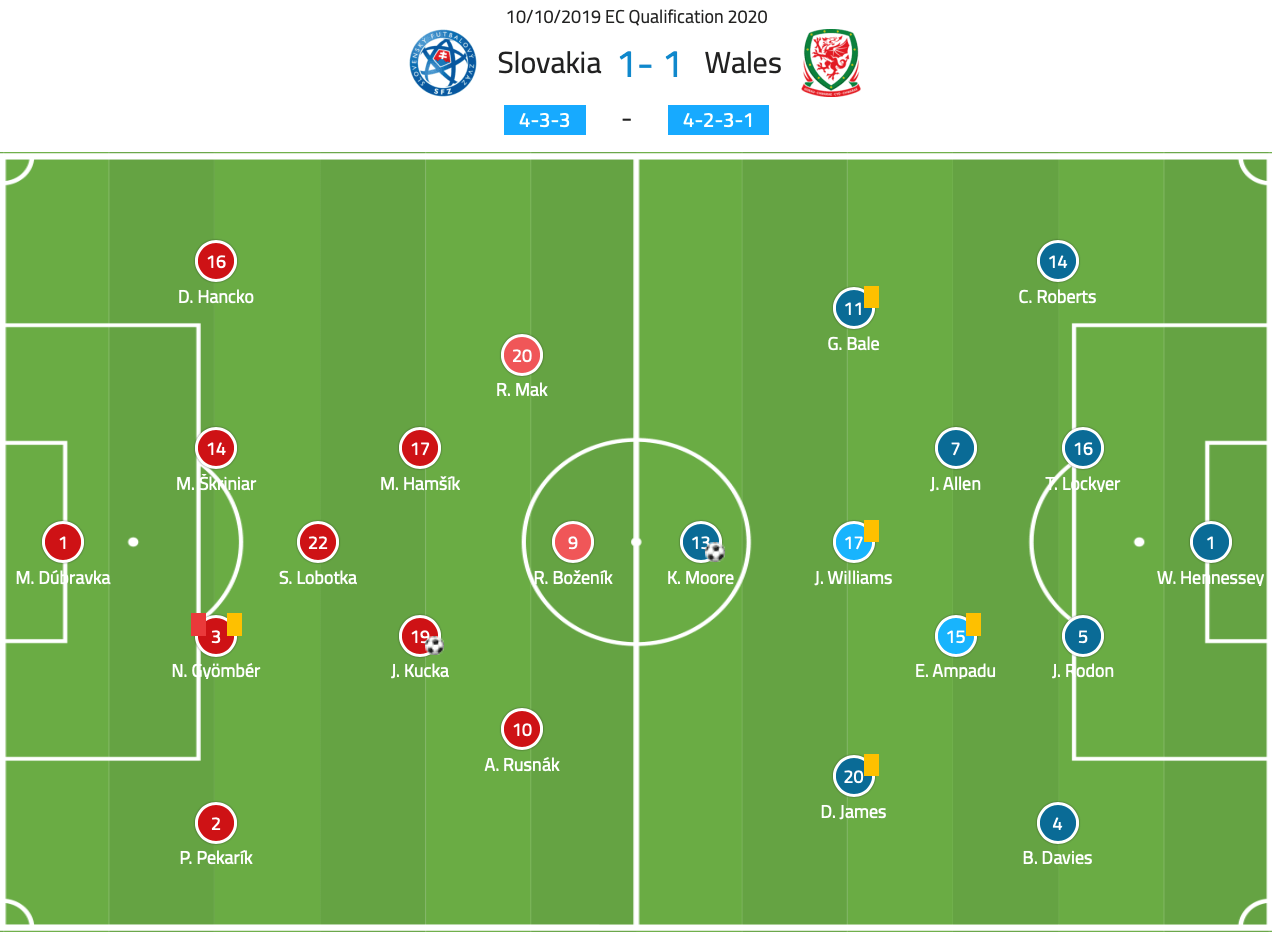 The hosts lined up in a similar formation and with similar personnel as the previous meeting, the only exceptions being Norbert Gyömbér for Denis Vavro at right centre-back and Róbert Boženík for Ondrej Duda in the centre of the front attacking line. The midfield continued to be the primary progressor of the ball, with Juraj Kucka, Stanislav Lobotka, and veteran captain Marek Hamšík all heavily involved.

Wales opted for a more defensive, reinforced formation. Midfielders Joe Allen and Ethan Ampadu played in the deeper part of midfield, tucking in centrally in defence. Gareth Bale and Daniel James occupied either side of attacking midfielder Jonathan Williams, and with striker Kieffer Moore making only his second-ever start for Wales, it was relatively clear what the visitors’ intent was.

Slovakia controlled the ball throughout much of the match, owning just under 70% possession. Much of this possession involved rotating the ball along the back line, looking for openings in the opposition. Wales were able to limit these openings thanks to an organised defensive block.

Their 4-2-3-1 shape often moved into a 4-4-2 shape out of possession. Included in this defensive setup was often a one or two man front press, as seen below. 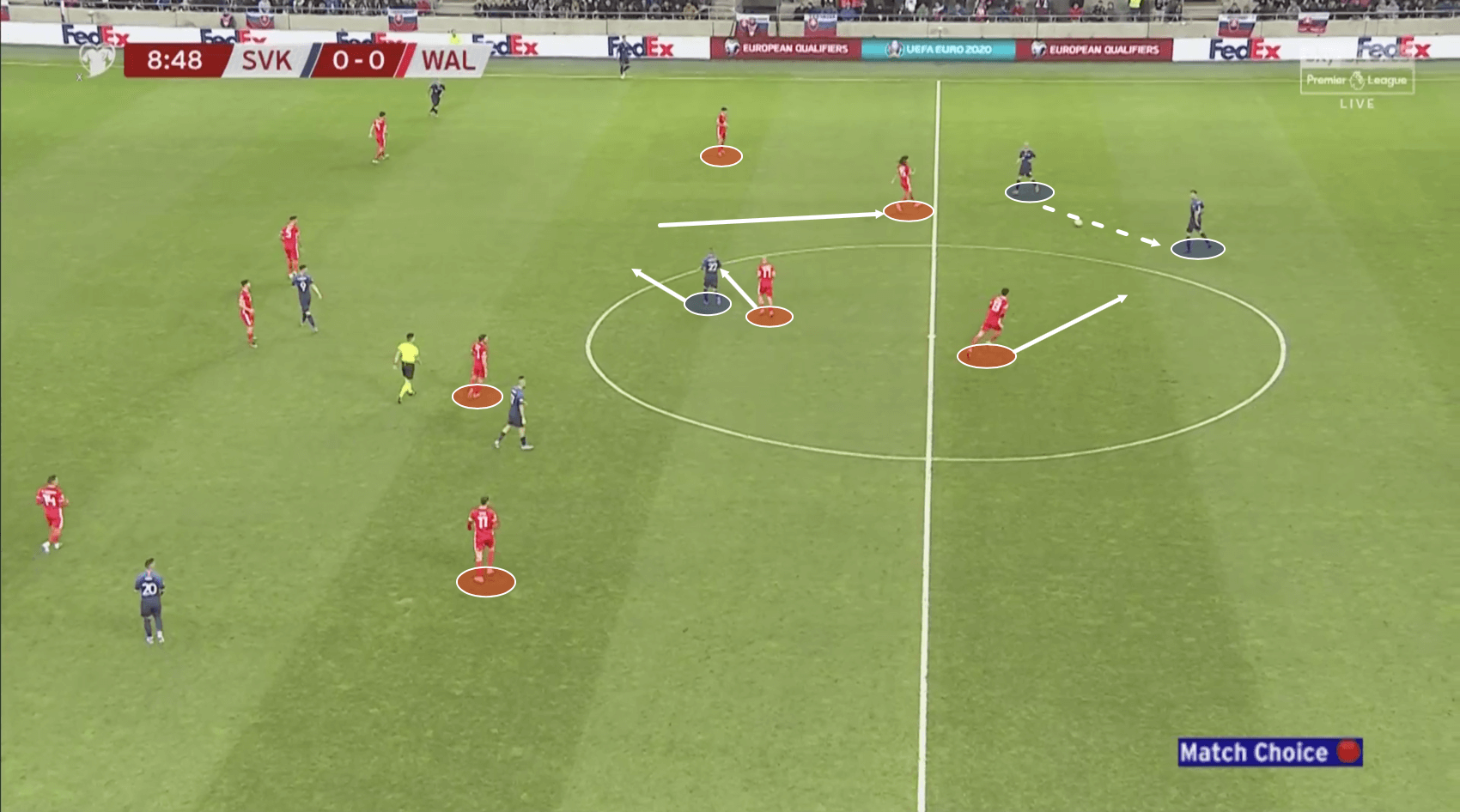 In this scene, Wales is allowing Slovakia possession at the back, but their defensive organisation prevents the home side from creating an attack. The ball-side central midfielder, in this case Ampadu, steps forward to press the ball alongside Moore, and in the process, Williams does well to cover the space left open by Ampadu. This made it very difficult for Slovakia to build through the middle, as evidenced by the large loss of possession by the Slovak midfielders.

On the other side of the ball, Wales attempted counter-attacks down the wide areas when in possession. Slovakia knew, especially after the last encounter, that Wales would attack using pace out wide, and therefore tried to halt any quick attacks before they occurred. 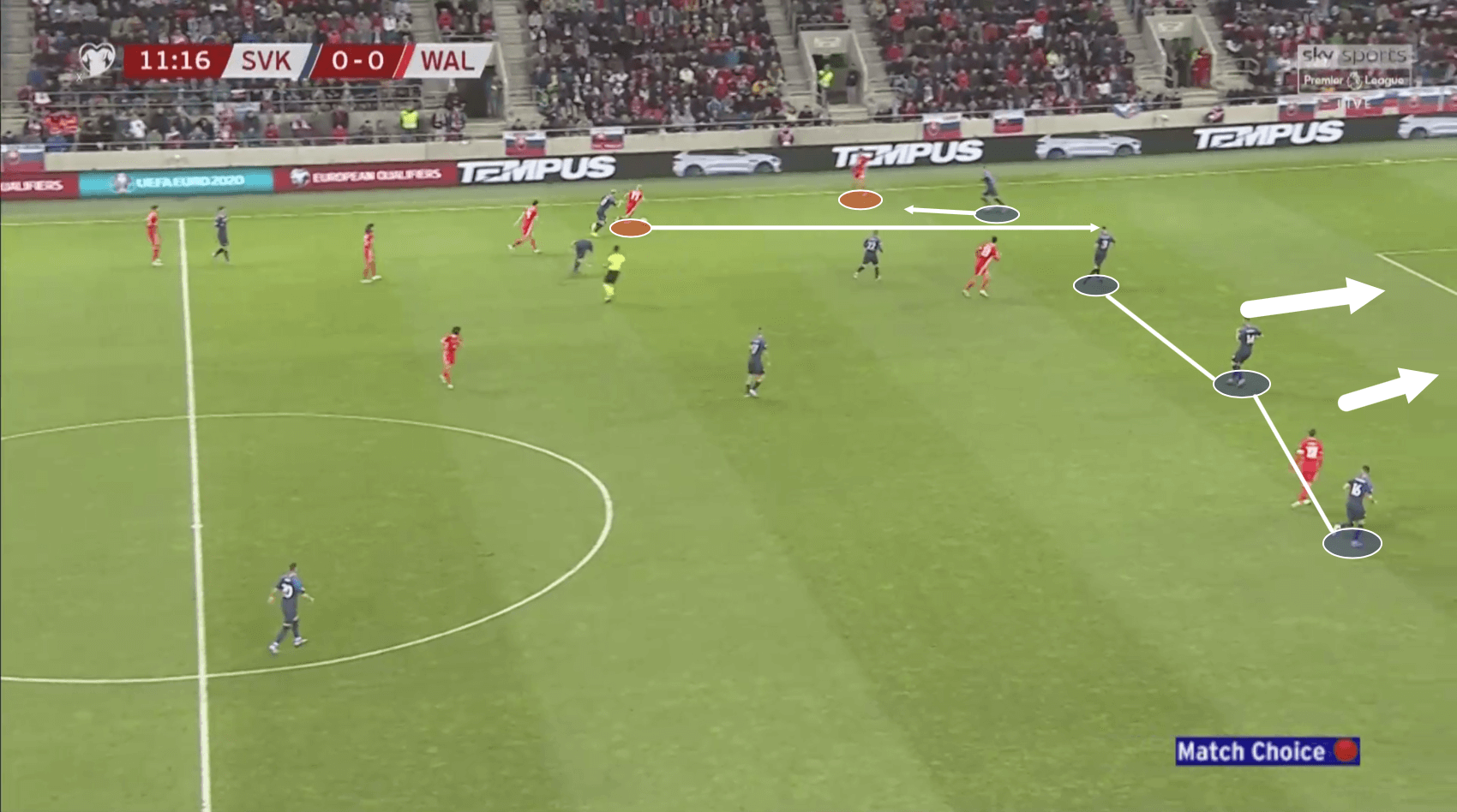 While Slovakia’s back line were prepared in quickly shifting back to defend their own box against Wales’ pace, Wales were still able to penetrate dangerous areas at times by drawing out the full-back. In the scenario above, James’ wide positioning pulled the right-back Peter Pekarík forward. Instead of passing to James, Williams then attempted to dribble the ball into the open space behind Pekarík. 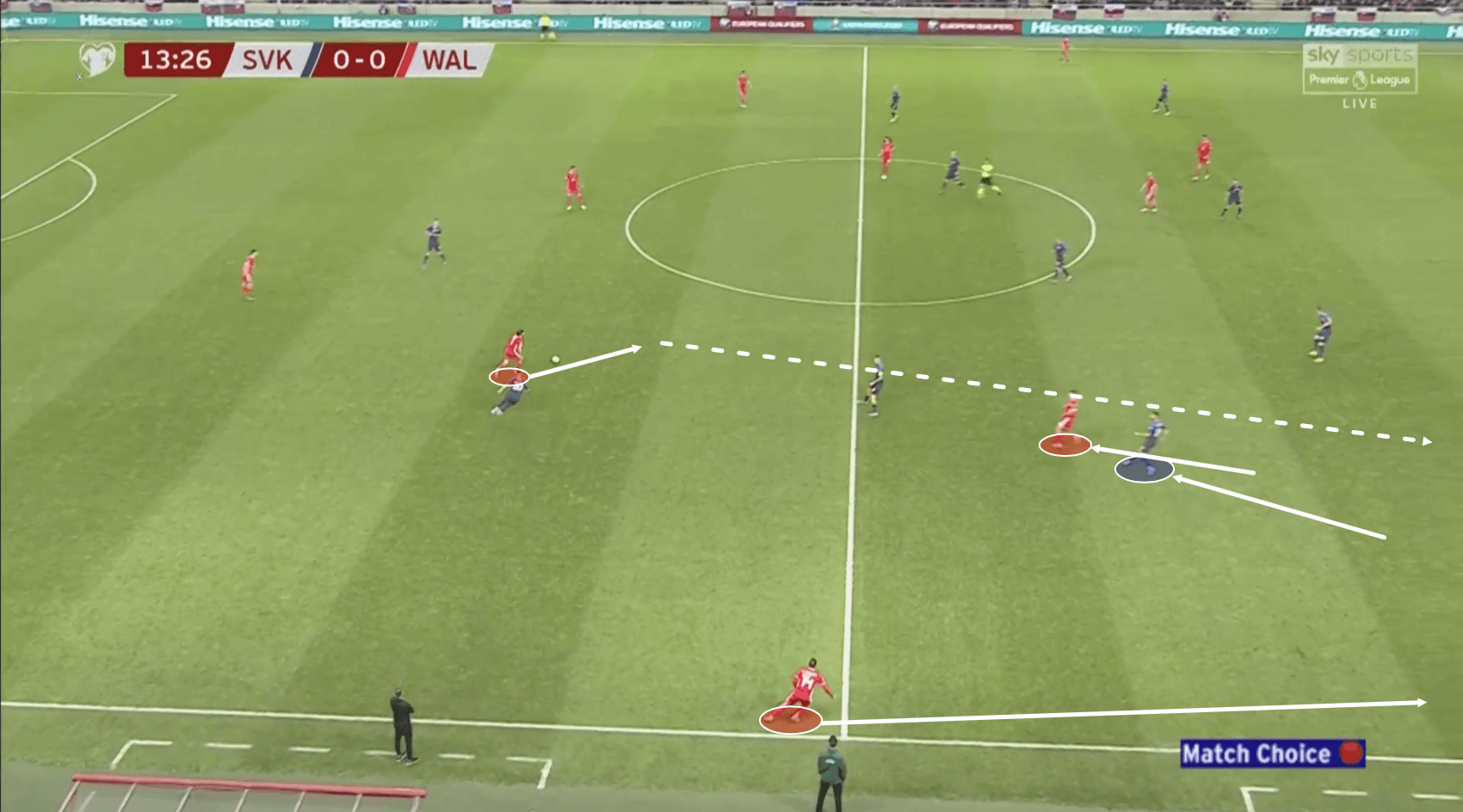 Here is another example of Wales drawing out the full-back to create space. As Allen dribbles into the midfield, Bale drops back into the right half-space. This baits Slovakia left-back Dávid Hancko into following him, which as a result opens up space for Wales right-back Connor Roberts to run into and receive a long pass.

These tactics eventually caused just enough disorganisation at the back to result in a goal for Wales. 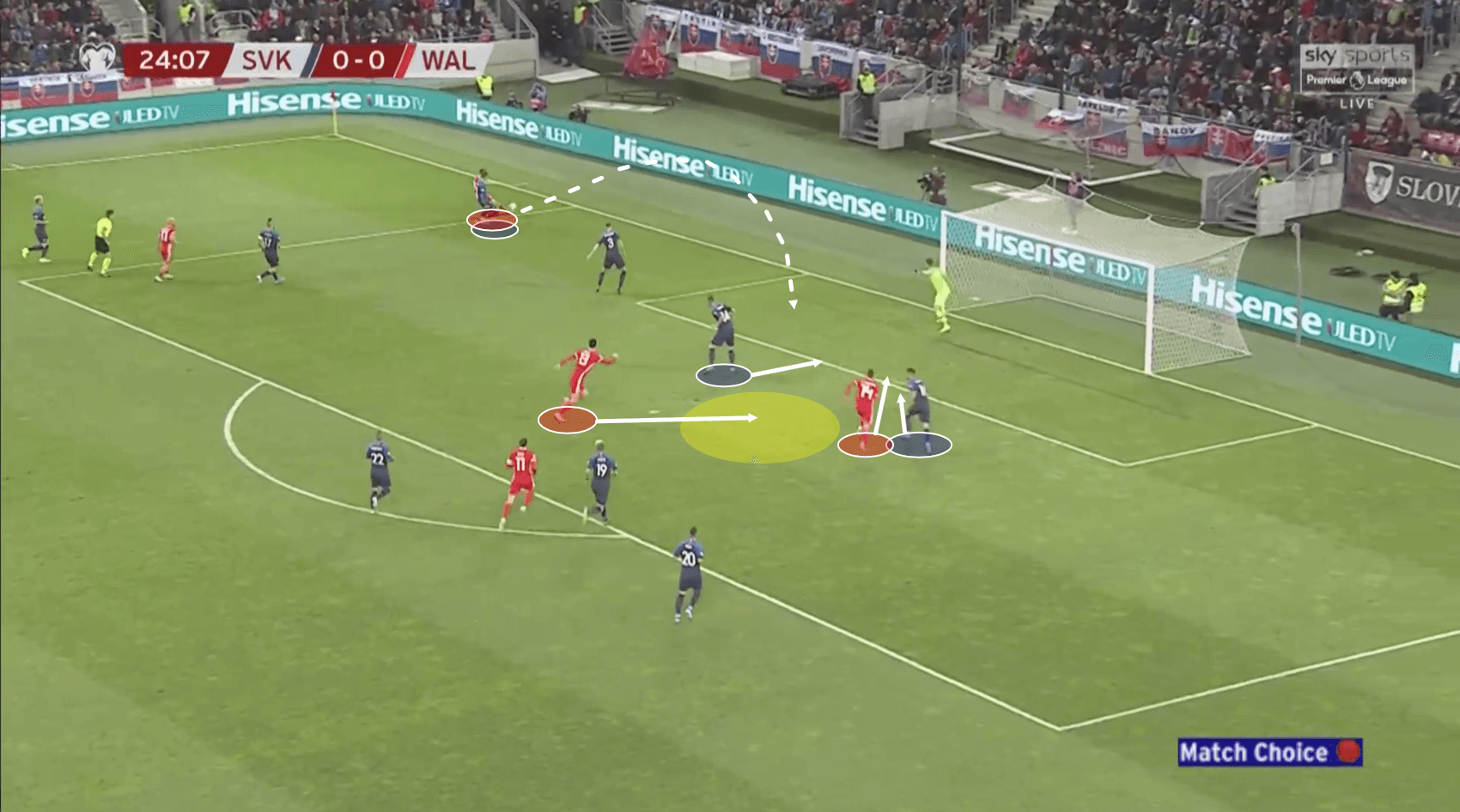 With the ball in the left wide area, the far-side attacker, here being Roberts after an overlap, ran centrally into the box to receive a cross. This movement opened space in front of the Slovak back line. Moore moved into this space, and headed in the opening goal using his impressive height of 1.96m (6’5”).

As stated, Slovakia were the primary possessor of the ball, and that only increased after Moore’s goal. Possession continued, however, to be restricted to the back line and deep-playing midfielders. This initially wasn’t a major issue for Slovakia as Wales allowed them plenty of space, but The Dragons consistently thwarted central progression. 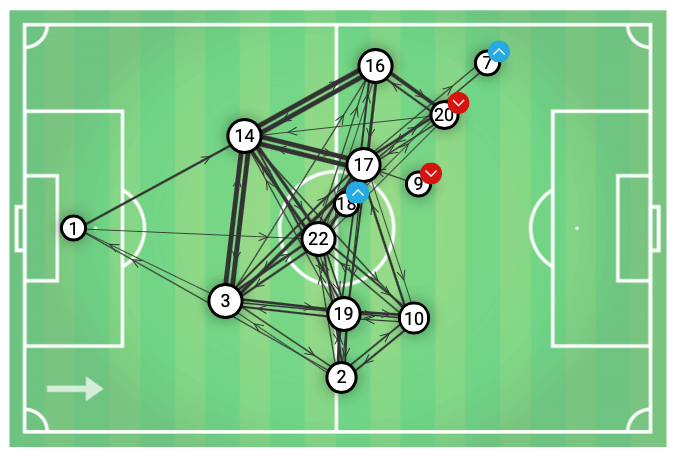 In the above figure, Slovakia’s passmap shows the limited connection between the midfield and the forward attacking players.

The primary method of Slovak progression were dribbles in the central areas. Lobotka and Kucka would draw opposing players towards them by dribbling between the Welsh lines. This was also often stopped by the Welsh midfield collapsing defensively towards the ball. 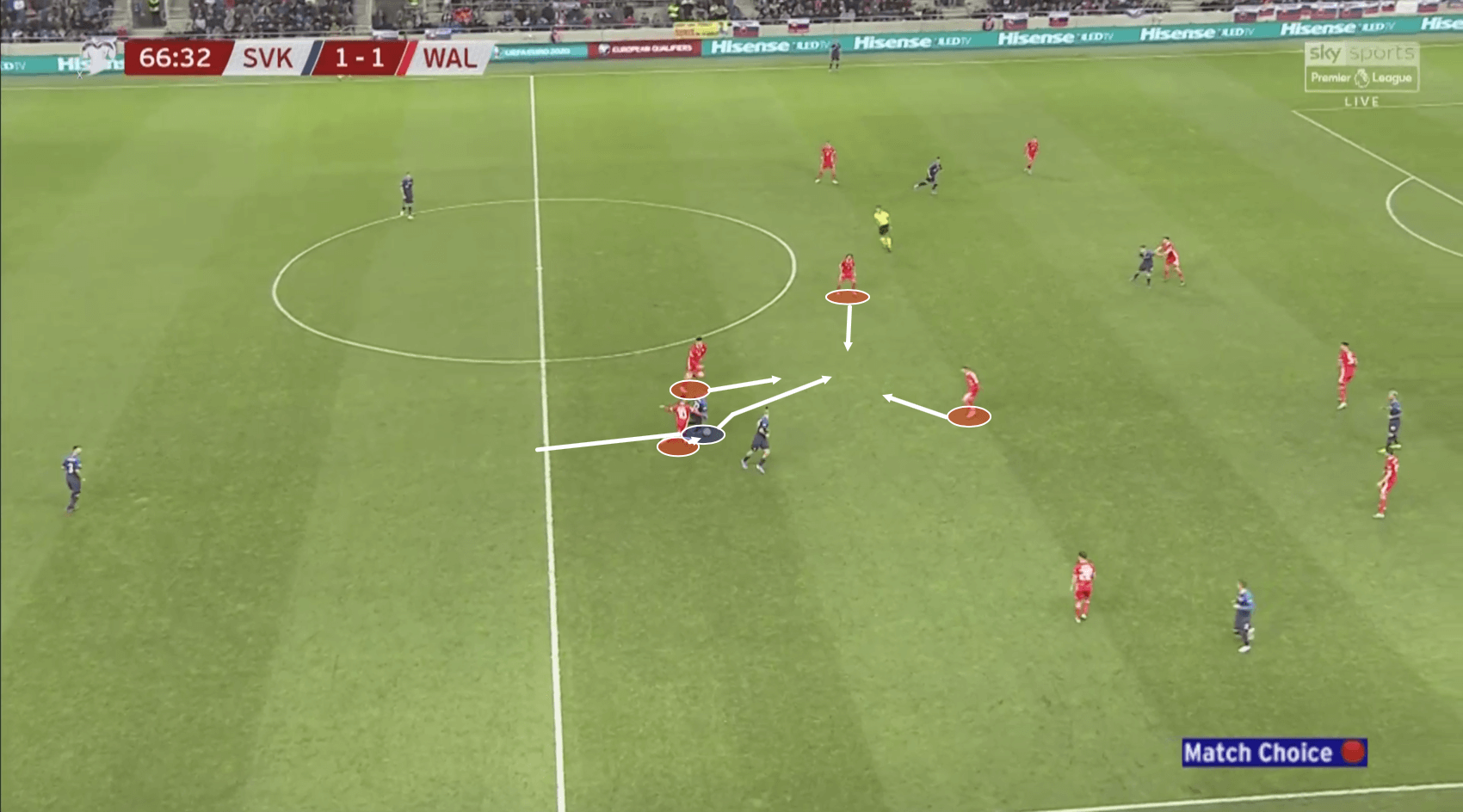 As seen here, Lobotka’s dribble down the right half-space was halted by this very action. This compact defending however would ultimately lead to Slovakia’s equaliser.

One tactic Slovakia utilised in attempts to get around the Wales defensive block was the usage of wide areas after drawing defenders towards the ball centrally. This is seen consistently during all periods of the match, to varying effect. 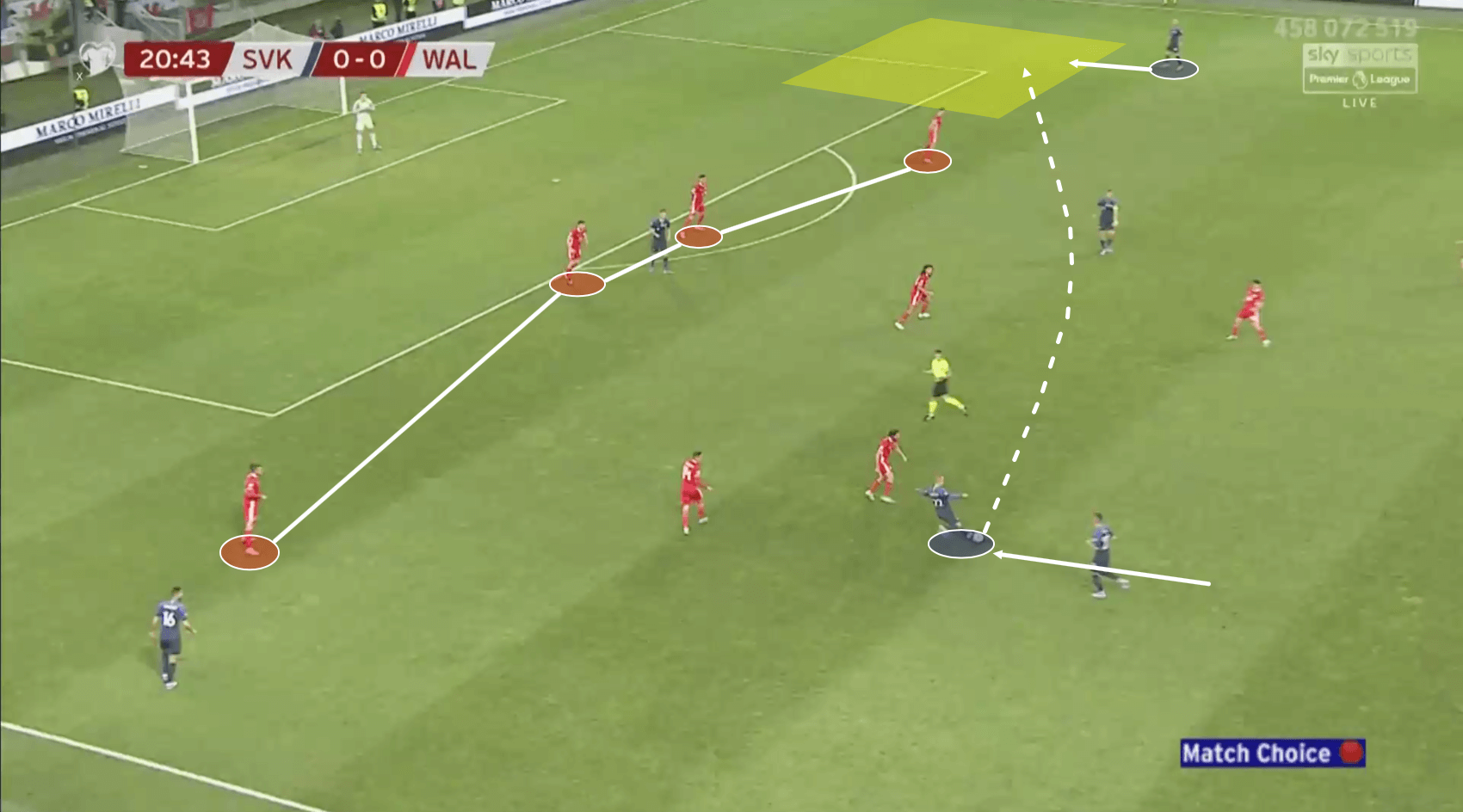 Again, this specific case shows Lobotka on a dribble down the half-space, but in this instance, he has the time and space to complete a long ball to the far-side attacker, who is positioned in the space around the compact block.

It was when these attempts succeeded in progressing the ball that Slovakia looked the most dangerous. Specifically after the Wales goal, this began to be the go-to device to Slovakia’s advancement into the final third. 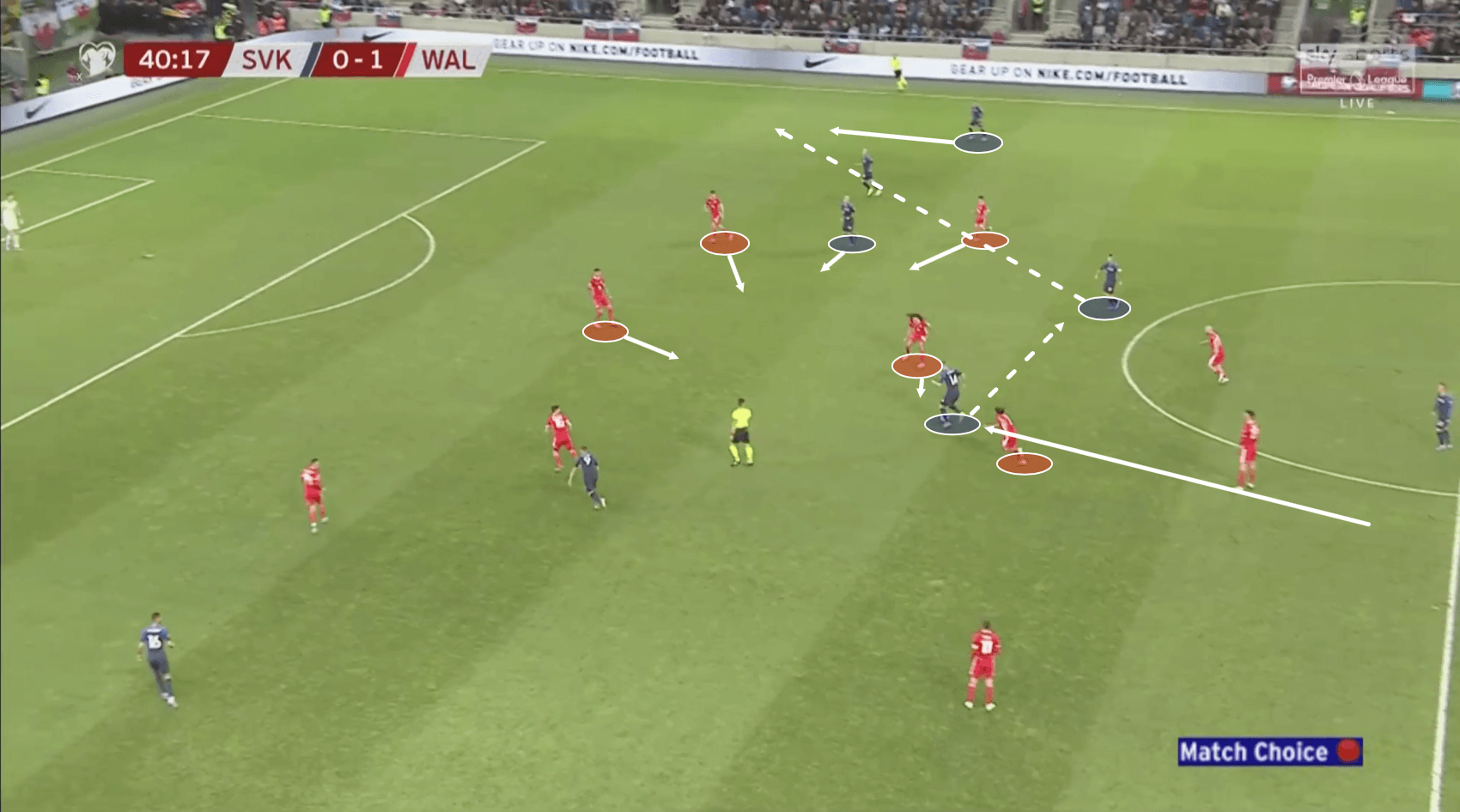 This is where central players with strong progression ability on the ball can be valuable. Lobotka and centre-back Milan Škriniar (seen dribbling in the above image) are excellent at this skill.

Slovakia began attacking more aggressively as succession of this technique grew, and as mentioned, they scored through it less than 10 minutes into the second half. 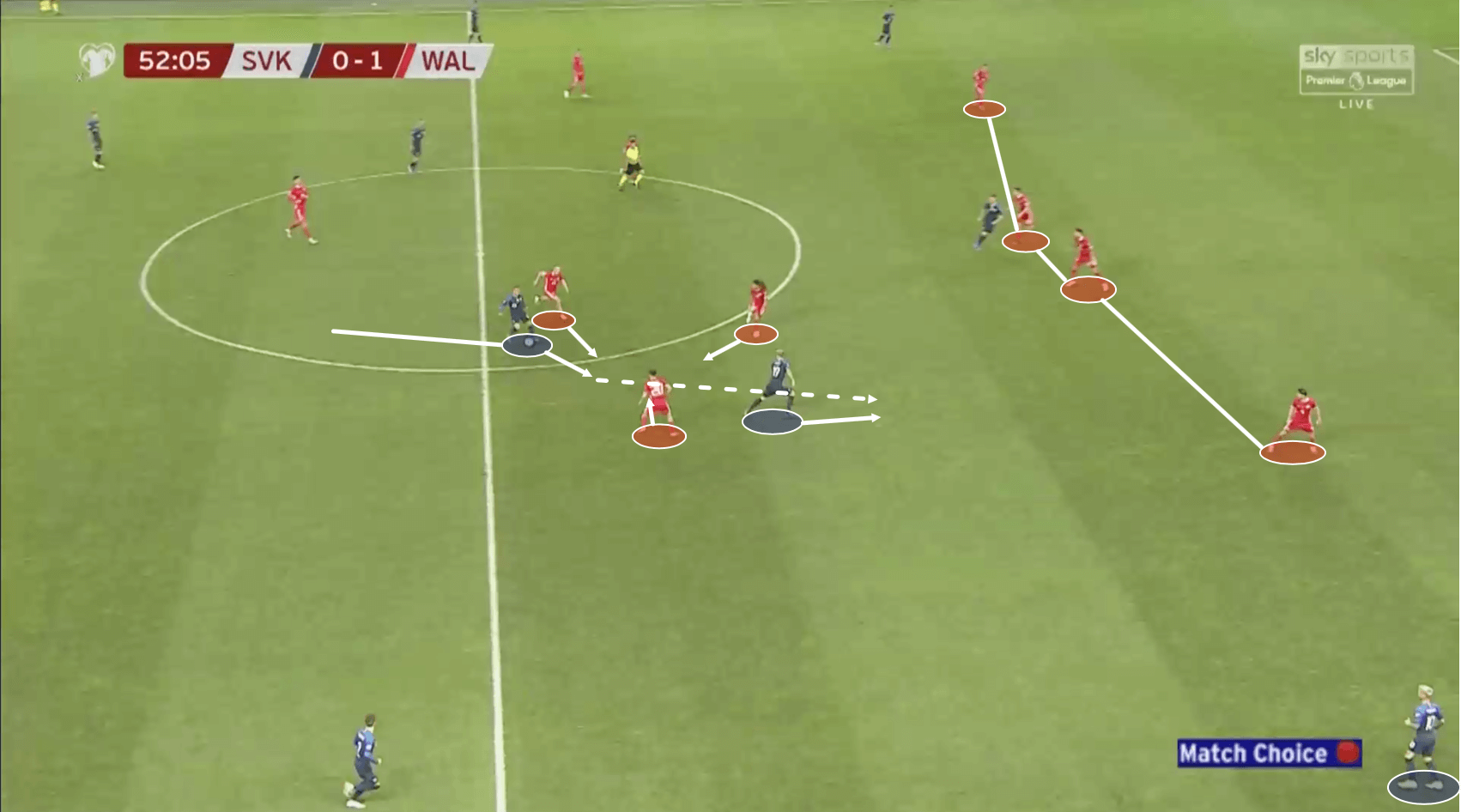 After a Lobotka dribble in the central area, three Welsh players collapsed towards him, planning on taking out any options available to the Celta de Vigo man. Lobotka managed to complete a pass forward to Kucka, who was running into now open space down the right half-space. 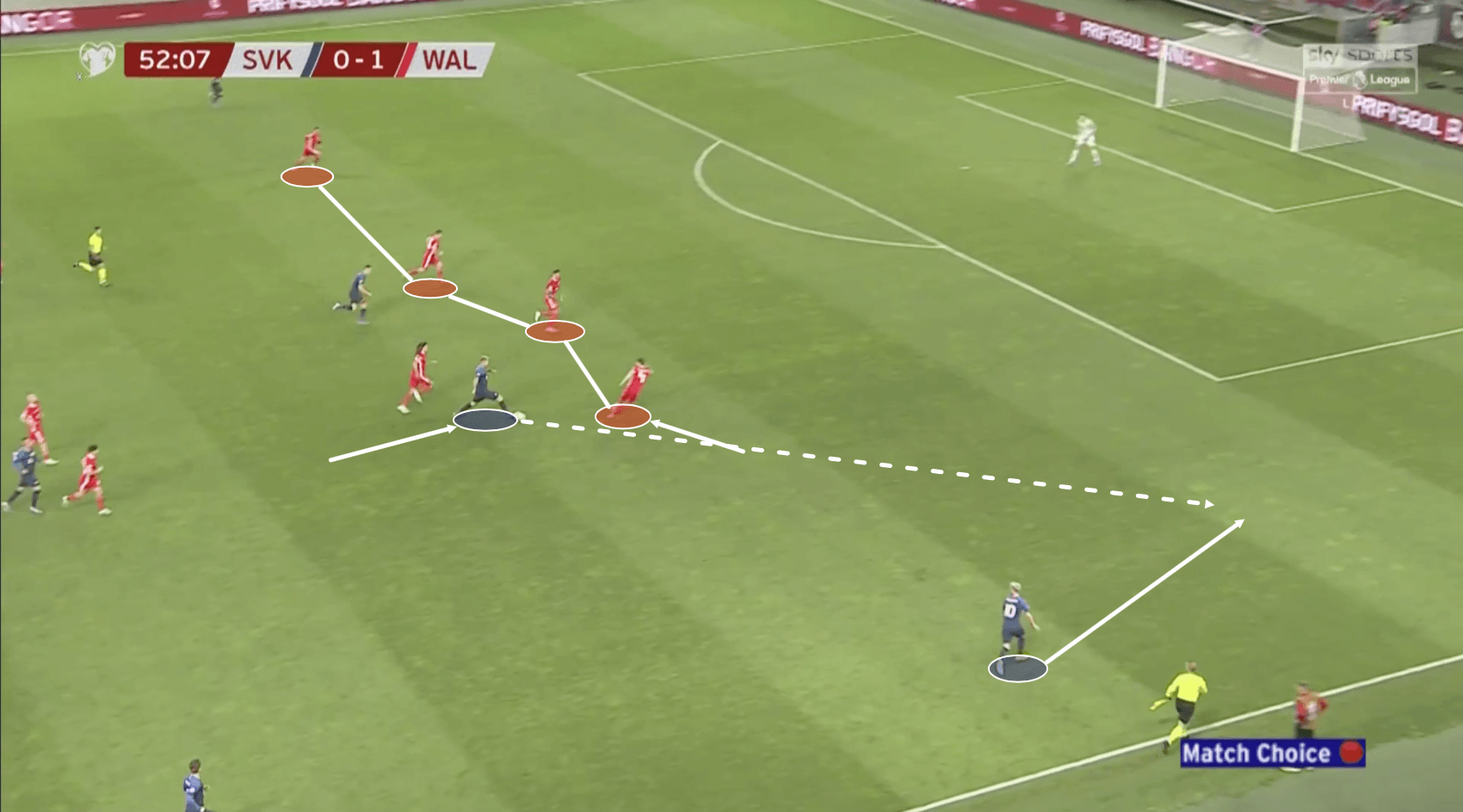 This run brought left-back Ben Davies forward to press the ball, leaving space wide for attacker Albert Rusnák to exploit. Less than 10 seconds after the completed pass to Rusnák, Kucka scored a stunning volley off an attempted clearance.

Despite the equaliser, Wales continued to play in a conservative defensive block for the remainder of the match, even after Slovakia went down a man late after Gyömbér received a second yellow card, likely to prevent dropping any more points.

Despite the somewhat surprising xG rate of 0.82 to 1.91, Wales, upon analysis, seemed content with allowing Slovakia to dominate possession. The tactics of the Sokoli were sound, and a defensive focus was likely the best approach heading into the match. With only two qualifying spots in a difficult group including Croatia, Slovakia, Wales, and Hungary, every match this round is valuable, and there’s a very good chance only one of these two sides will make it past the Euro qualifiers.