Italy hosted Turkey at the opening game of the long-awaited EURO 2020 and it was an entertaining first match for the lovers of the game. The final result was 3-0 for the Azzurri who proved that they can reach the advanced stages of the tournament since their performance was convincing especially during the second-half. Turkey however did not show a lot of what they are capable of achieving and they lost their first match without making any concrete reaction. Nevertheless, they will strive to bounce back when they face Wales and Switzerland in order to secure a ticket for the knockout stage.

In this tactical analysis article, we will explore what happened during this EURO 2020 match, how did Italy deserve the win more than Turkey, why did the tactics of Turkey fail, and how were the Azzurri able to break down their opponent’s compact defence more than three times.

On the other hand, Roberto Mancini relied on his usual 4-3-3 formation with Gianluigi Donnarumma in goal, Alessandro Florenzi, Leonardo Bonucci, Giorgio Chiellini and Leonardo Spinazzola in defence, Nicolò Barella, Jorginho, Manuel Locatelli as central midfielders with Domenico Berardi and Lorenzo Insigne playing as wingers behind the striker Ciro Immobile. 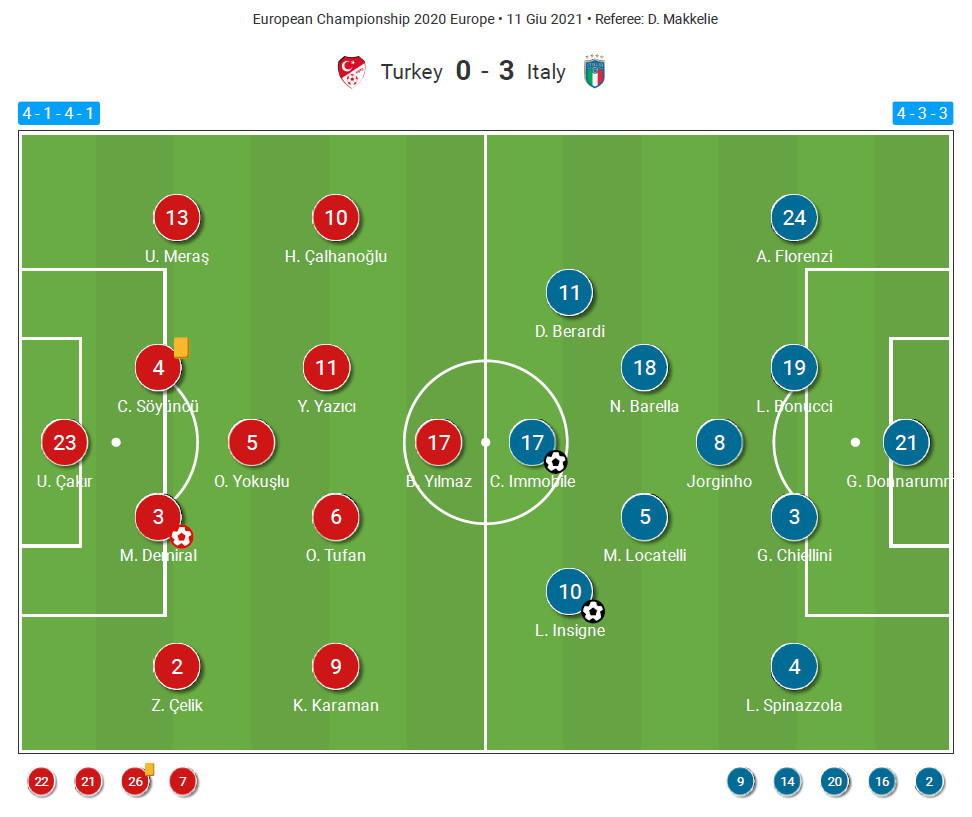 Italy started the match in a positive way by keeping possession and circulating the ball without being in a hurry even when they build up from defence. This precise and continuous circulation of the ball was one of Italy’s key tools to dominate the game and prevent Turkey from being dangerous.

The 63% possession rate showcased Italy’s players’ confidence and determination to win this match by imposing their style that is based mainly on possession, quick short passes and movement without the ball. To do so successfully, the players needed to be 100% focused and patient especially when in possession, otherwise, their actions would not have been concluded well. And although they committed some passing accuracy mistakes in the first-half, they made up for that in the second-half by being clinical in the final third and giving numerous key passes to the front three.

Italy were not able to create dangerous chances initially since Turkey made their mission a bit complicated by defending with ten players as soon as Italy reaches their own half. However, the Azzurri created some clear goalscoring chances especially thanks to the continuous advancement of Spinazzola and Florenzi and the reliance on both wingers Insigne and Berardi to find solutions from the wings given that Turkey opted for defending centrally.

Even though this made it difficult to serve Immobile or pass to midfielders who penetrate inside the box, the five players who played on the wings (including Giovanni Di Lorenzo who replaced Florenzi at half-time) were on their best form and were able to break Turkey’s defence on several occasions either by dribbling individually or by resorting to one-two passes to get rid of opposing markers. As you can see below, Italy’s first concrete chance came following an Insigne-Berardi one-two that excluded more than two Turkey’s defenders and allowed Insigne to be in a perfect shooting position, however, his shot went outside the goal. 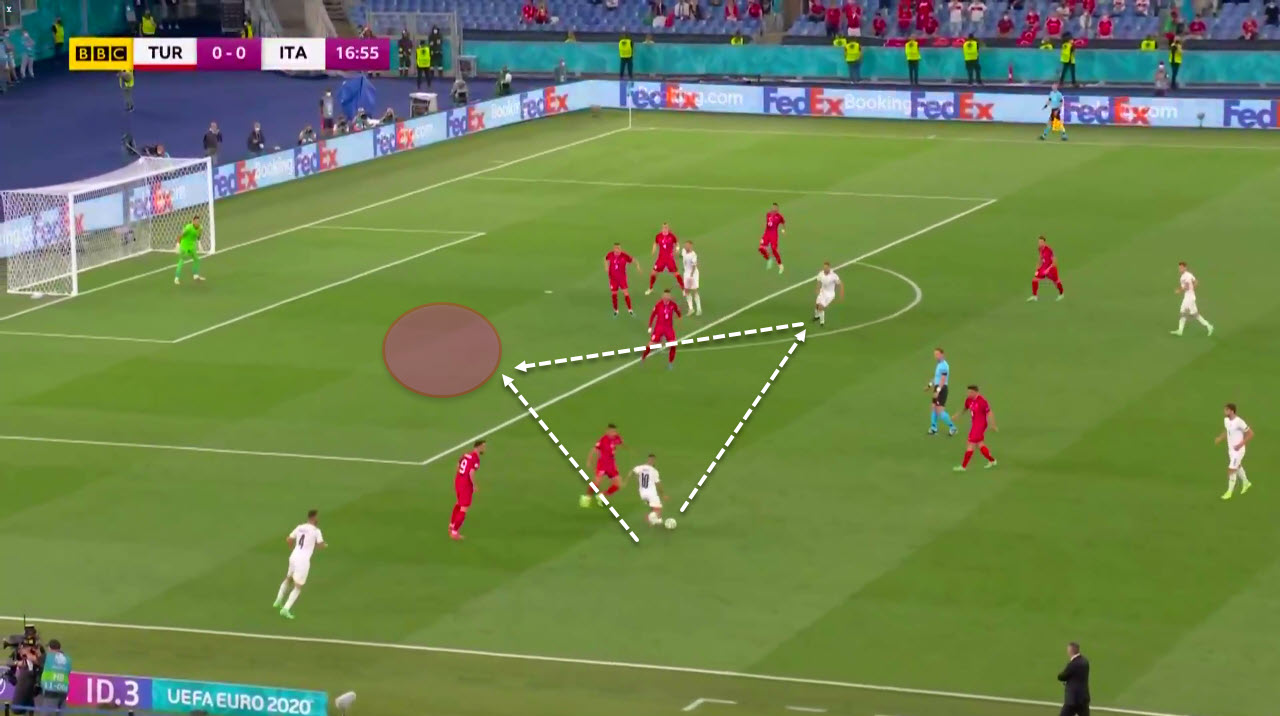 In addition, Berardi’s role consisted not only of playing on the right-wing but also moving towards the box and asking for the ball beside Immobile as a second striker. This happened so often in the match and gave Italy an additional option inside the box. At the same time, it confused Turkey’s defenders who were not able to predict Berardi’s movements. 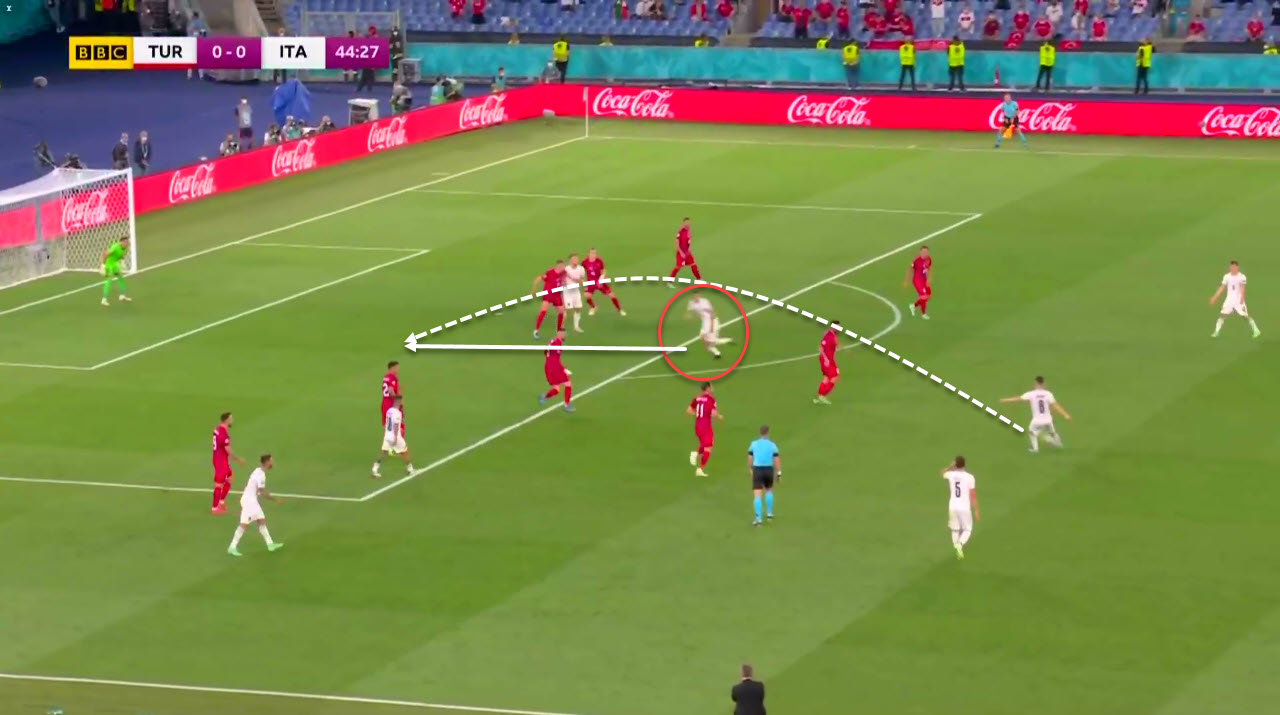 Italy’s midfield was also a big contributor in the team’s attacks. Whether by serving passes, helping in the transition, or providing options upfront, Jorginho, Locatelli and Barella were always at the heart of their team’s actions and they guaranteed that the ball remains at Italy’s possession. In this example for instance both Barella and Jorginho were the initiators of the action while Locatelli advanced to be an additional striker inside the box and give more free space to Insigne who moved towards the centre. At the same time, Spinazzola and Florenzi were as high as possible and this allowed Berardi and Insigne to be able to move freely inside the box and not be obliged to remain on the wings. 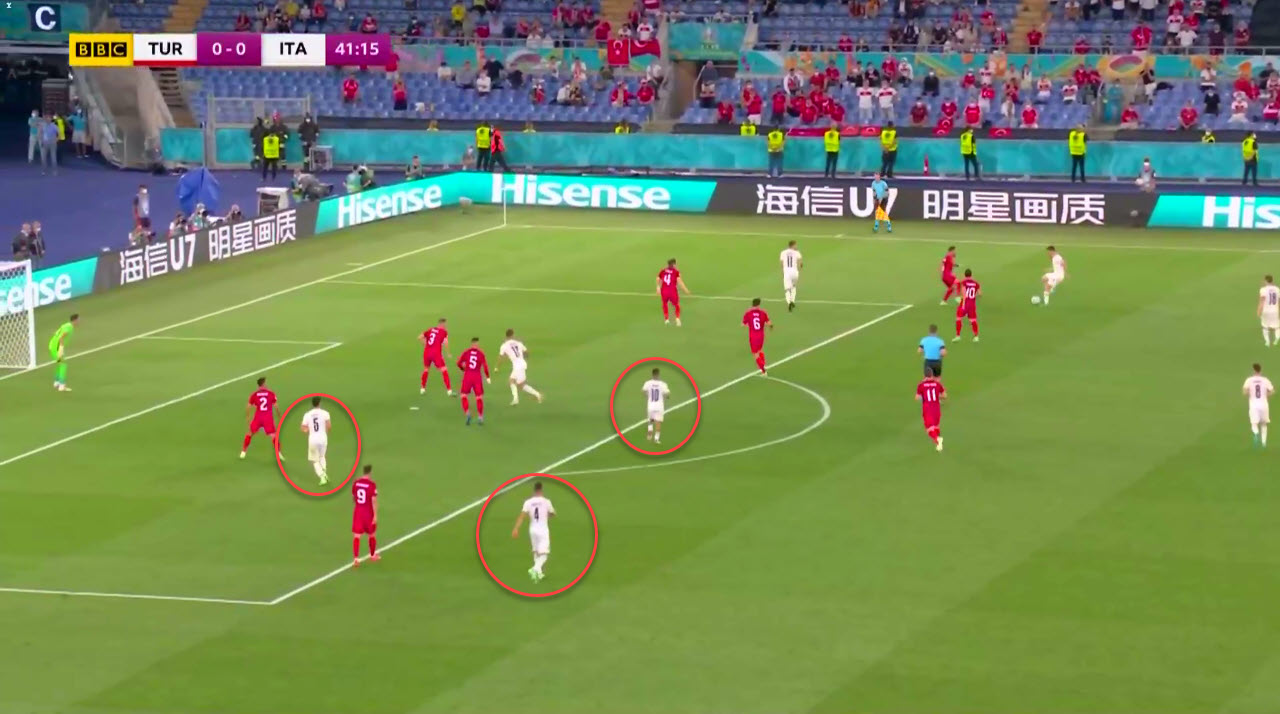 Italy’s continued pressing and attacking attempts however were not enough to reach Turkey’s goal in the first-half and the latter’s defensive efforts paid off even though they risked a lot. However, as soon as the second-half started, Turkey were not as attentive and reactive as they were in the first-half and Italy were able to exploit this with their midfielders’ passes between the lines to create numerical superiority. And in the first time that they were able to execute that, they scored following a Demiral mistake. Yet, the main contributors for this goal were Locatelli’s excellent pass between the lines, Barella’s quick pass towards Berardi that created a numerical superiority and Berardi’s effort on the wing before crossing the ball towards Immobile. 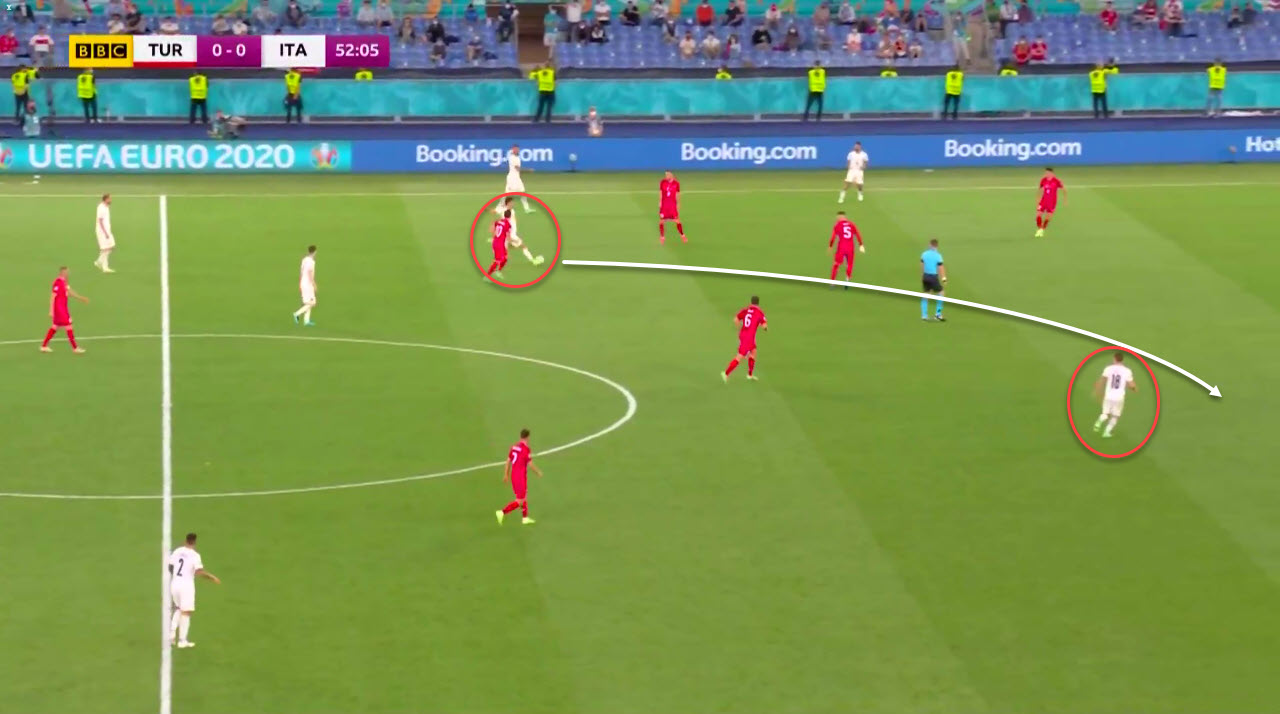 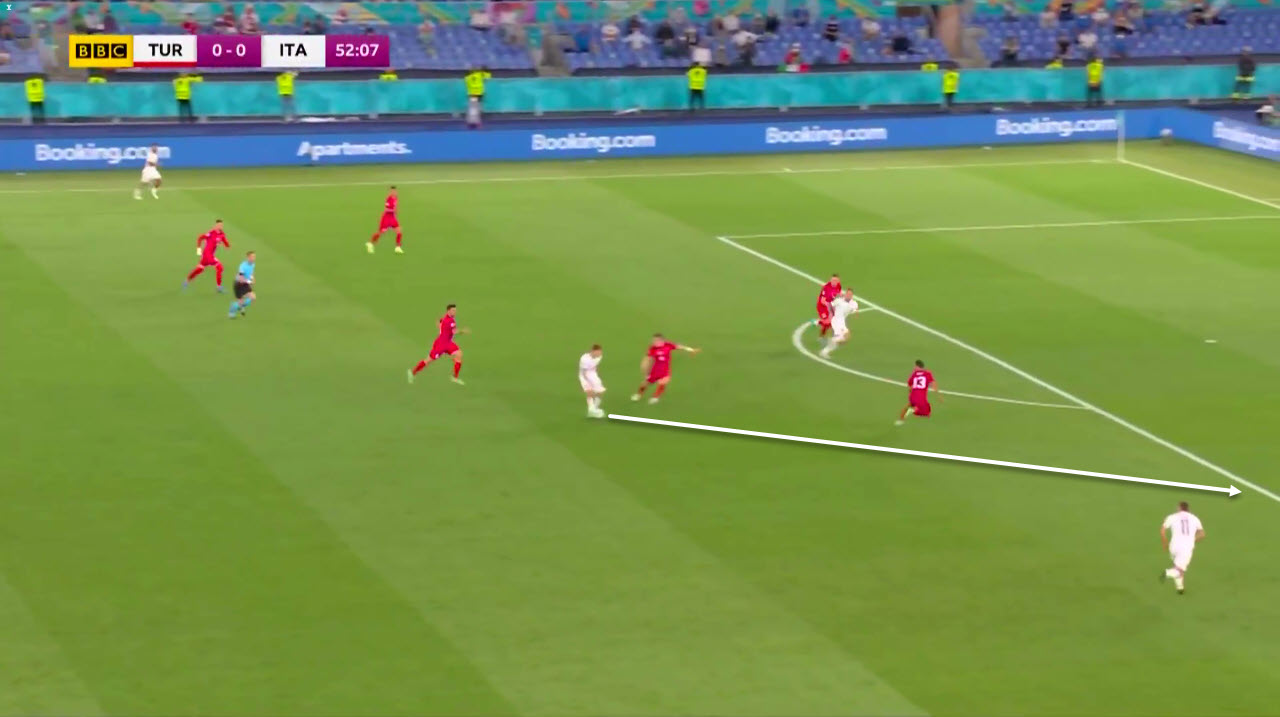 Then, Italy did not cease from attacking and kept relying on the same mentality and on using the quick short passes and continuous movements without the ball in attack to keep possession in the final third and be dangerous whenever possible. The second goal therefore came following an Italy possession in Turkey’s half, then, Berardi was able to spot Spinazzola’s run on the left wing and decided to cross the ball towards him when everyone thought that he would cross it towards the box where everyone was waiting. Berardi’s pass gave Spinazzola the chance to shoot despite being marked, and then Immobile was ready to finish the action with a shot on goal after Çakır was able to save the first one. 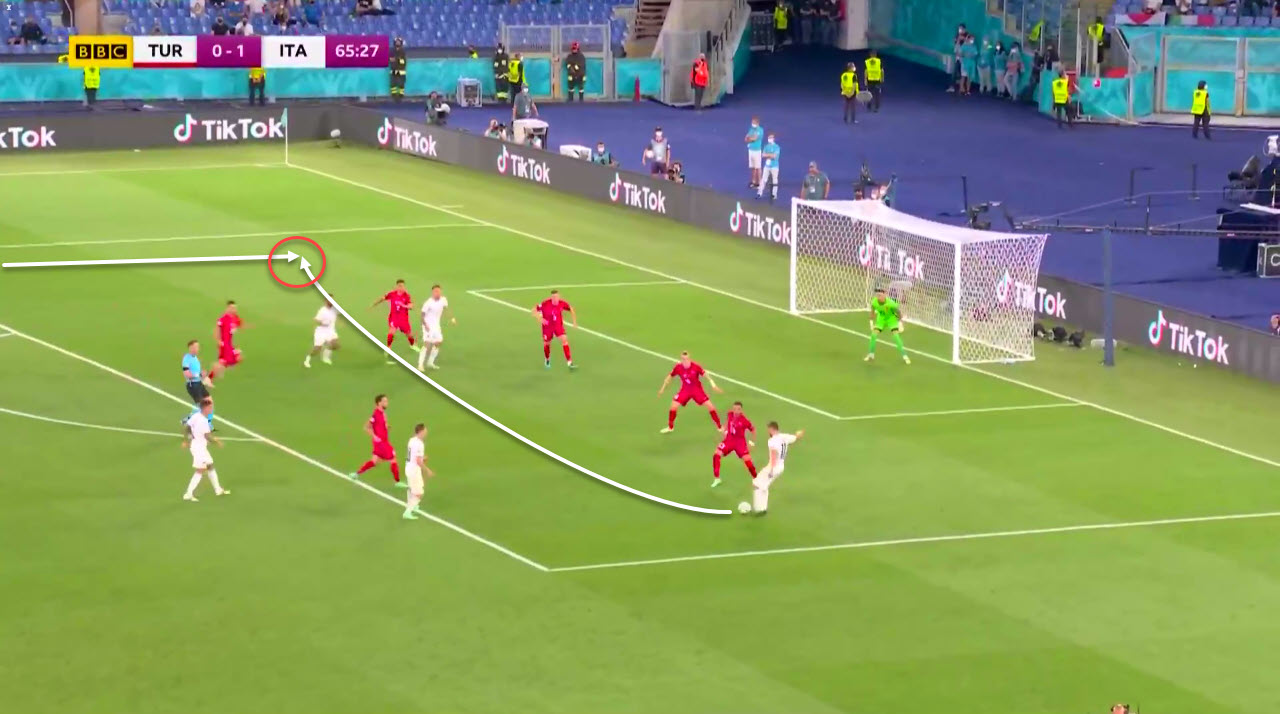 Turkey’s playing style in this match was based on Italy’s strong aspects. In other words, Turkey preferred to not rely on building up from the back since they wanted to avoid Italy’s effective high pressing. And that’s why we saw them crossing the ball directly towards Yılmaz or one of the other attacking players.

This however was also a failed plan since players like Chiellini and Bonucci were usually better in aerial duels and therefore Turkey were neither able to create from the back nor successful in using long passes. Not only that, in the few times in which Turkey opted for using short passes in defence, they directly got punished by a third Italy goal. Berardi was able to anticipate Çakır’s pass to Meraş and he quickly passed to Immobile who gave it to Insigne in a perfect shooting position, and this time Napoli’s captain did not fail in giving the ball the necessary effect to hit the net. 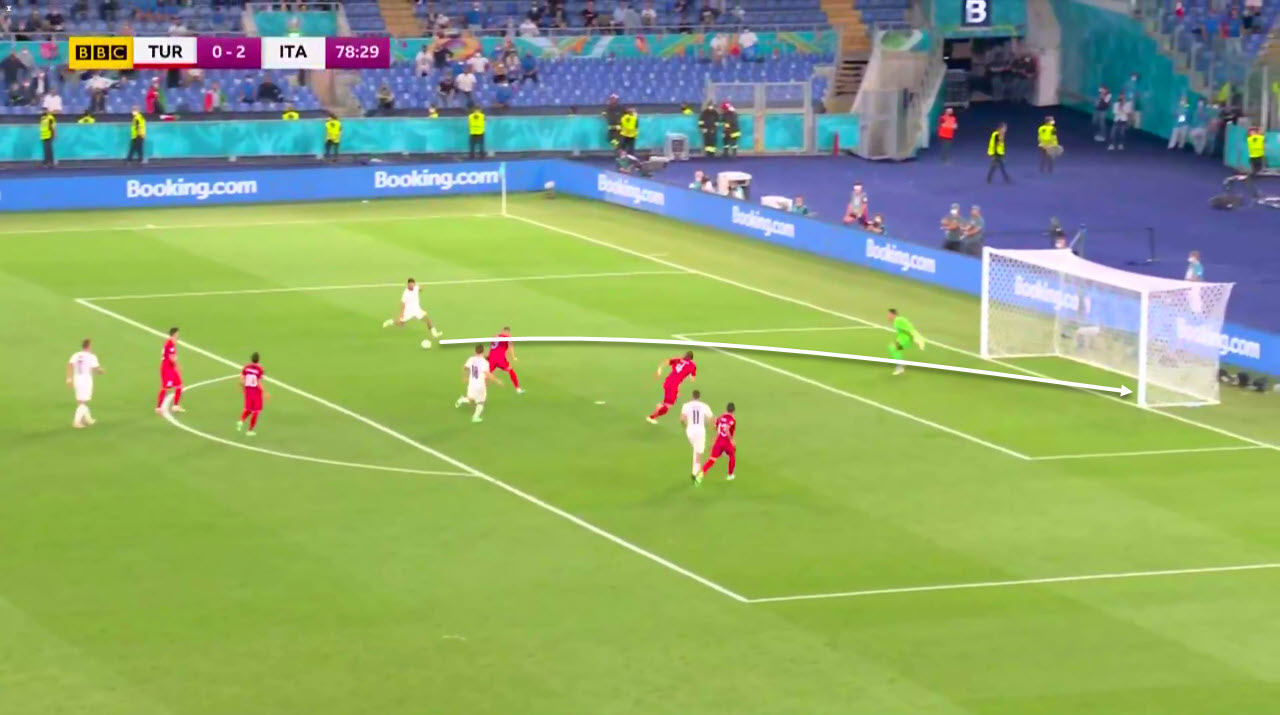 Italy opened EURO 2020 with an excellent performance and a perfect result despite the big amount of pressure put on the players. However, much more concentration and work are needed to confirm their readiness to reach the final stages of the tournament. And this will begin by doing their best to beat Switzerland and Wales.

For Turkey, the team did not exploit the talented midfield players that they have and decided to adopt a defensive playing style during this match instead of attempting to score at times at least. In fact, the absence of clear attacking ideas was clear in this match and it was one of the reasons why Turkey was not even able to score a goal.

Yılmaz was often alone in attack and the rest of midfield players were not able to circulate the ball in a continuous way to be able to create some danger. And in order to qualify for the knockout round, Turkey will need to address their attacking issues as soon as possible while forgetting what happened in this game and concentrating on how to score goals against Switzerland and Wales, given that they have the necessary tools to win against these two teams.