The Premier League returned for the 2020/21 season and gameweek one saw the clash of two of last season’s champions. Leeds United were back in the top flight after 16 years and Marcelo Bielsa had brought them back up in some style, winning the Championship the season before. Liverpool, on the other hand, were back to defend their crown after a dominant 2019/20 campaign. Jürgen Klopp was at the forefront of the Anfield outfit’s climb back to the pinnacle of not only English but world football as well. In this tactical analysis, we will look at the tactics of both Liverpool and Leeds United in what proved to be a captivating fixture. 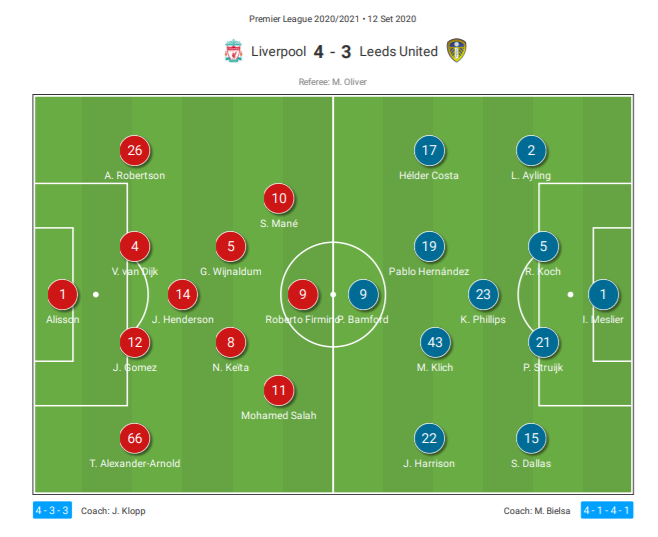 Klopp’s side started off with a 4-3-3 formation with their famed front three of Sadio Mané, Roberto Firmino, and Mohamed Salah leading the line. Naby Keïta started in midfield while Joe Gomez was the preferred partner at centre-back for Virgil van Dijk.

Bielsa set up his Leeds United side in a 4-1-4-1, with Kalvin Phillips playing as the defensive midfielder. The Englishman’s impressive performances earned him a call up to the national squad for the recent string of Nations League fixtures. New signing Robin Koch also started his first game since arriving from SC Freiburg while Patrick Bamford led the line ahead of the latest signing, Rodrigo.

Now that we have seen how the teams set up at the start, let us move into the analysis of the tactics used by both sides. 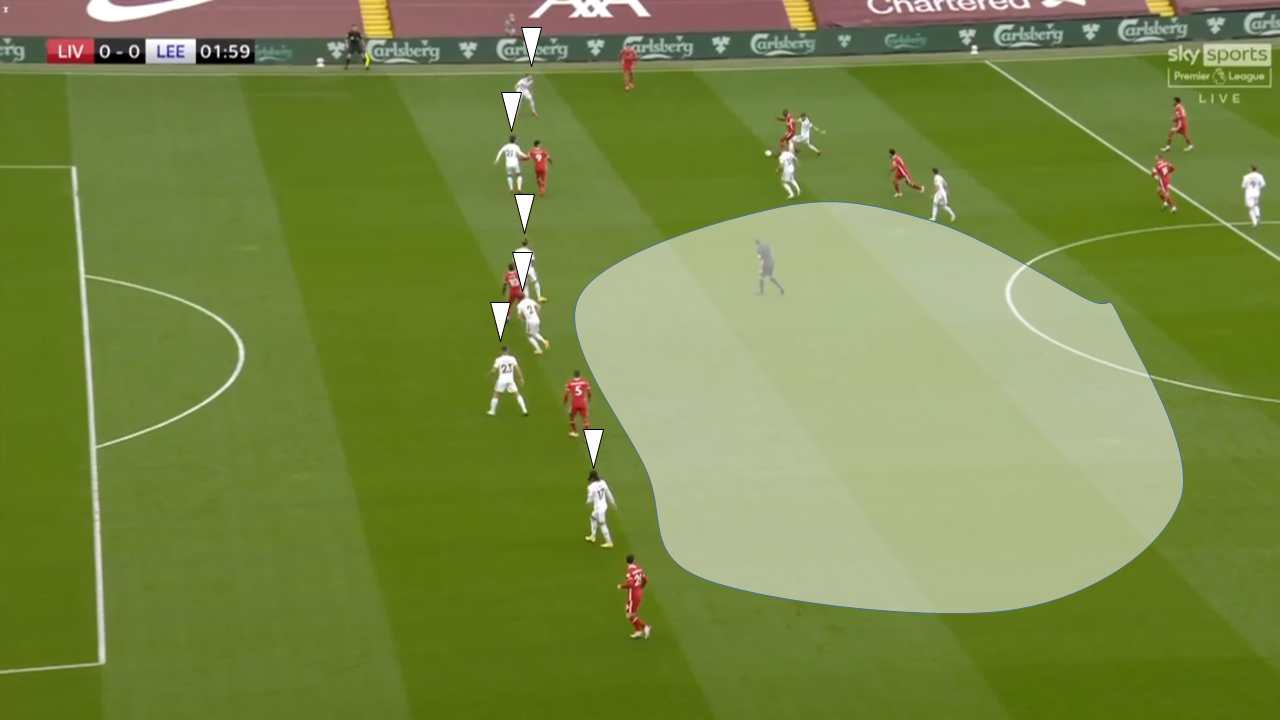 Leeds made their intentions clear early on, looking to press Liverpool and win the ball back as quickly as possible. However, this could be a dangerous tactic against a Liverpool side that can turn quickly and break the lines. Bielsa recognised this danger and this saw Leeds adopt an interesting tactic. The front four or five players would be tasked with pressing the players on the ball while the midfielders, usually Phillips and another one of the central midfielders, would drop into the backline to form what was either a back five or six.

This effectively meant that the side avoided the central areas of the pitch unless Liverpool opted to play through the centre. Such a tactic was put in place to counter the effect of the Liverpool wingers and full-backs, as Leeds looked to have enough players behind to deal with crosses while also being able to attack the ball and win it back. 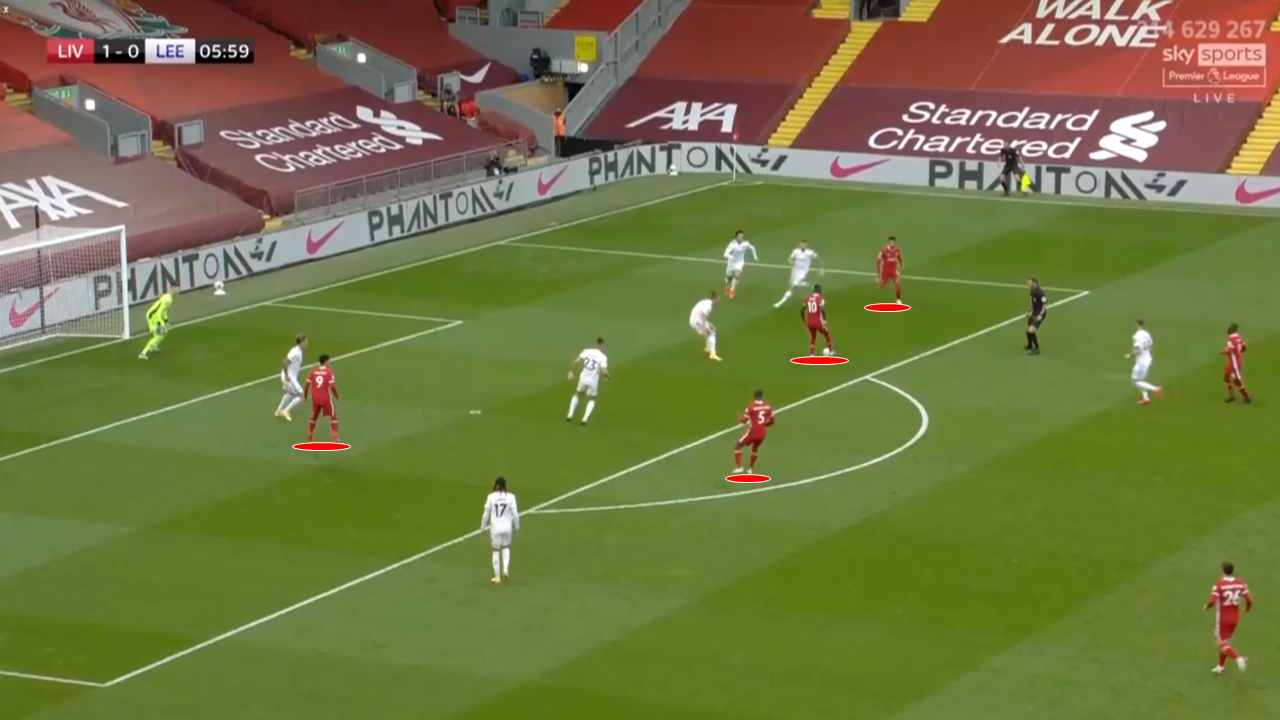 Another issue that Leeds had to deal with, however, was the fact that Mané found himself playing a very free role. Klopp’s tactics saw Mané often moving out of his natural left wing spot and moving towards the centre or even to the right, alongside Salah. These were not just the players swapping wings as Firmino and Salah would stay where they were, meaning that an extra threat was created due to the presence of an additional attacker. Georginio Wijnaldum would also move up to occupy a position of nearly a second striker and these tactics meant that Liverpool could have at least four players in and around dangerous areas in the box. 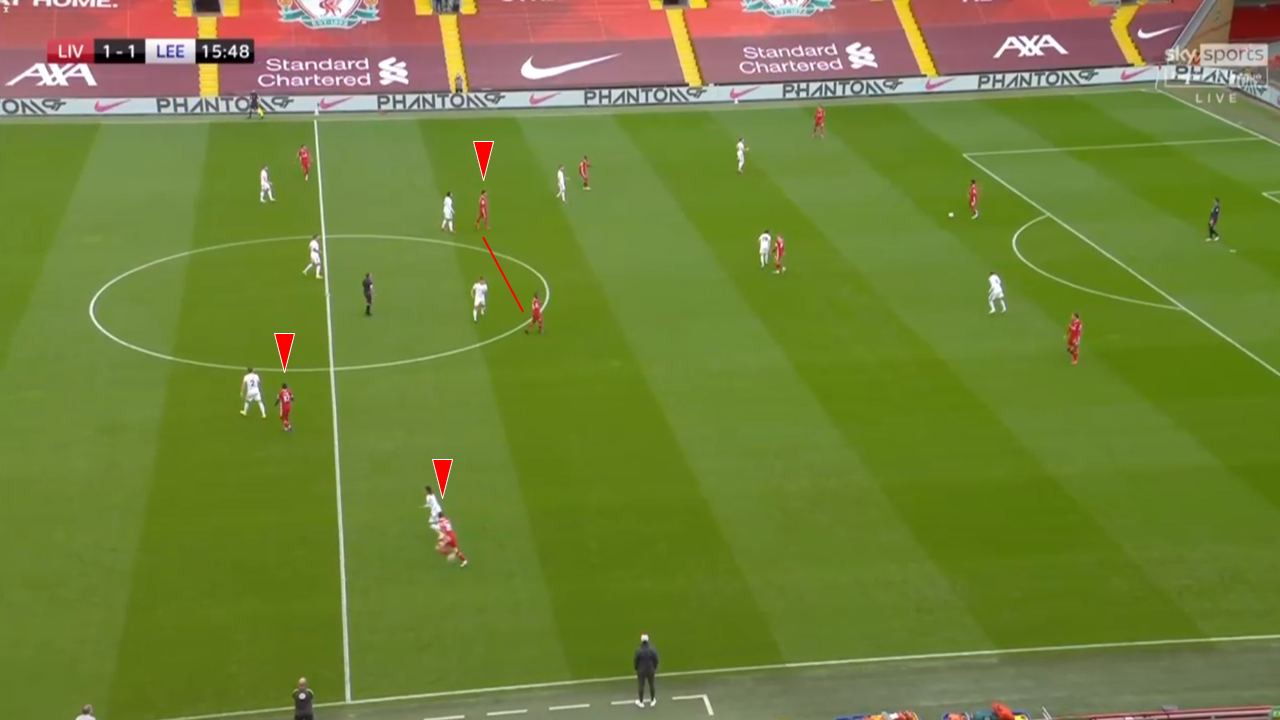 What this meant was that Andrew Robertson could also push forward to occupy the space left by Mané. Firmino would also drop back to help the midfield and would stay level with Wijnaldum in midfield. This paved way for Liverpool to adopt a 3-4-3 formation with a diamond in midfield and Robertson becoming effectively a left-winger in the attack.

On the other side, Trent Alexander-Arnold was not afforded the same amount as freedom as he would have to support the defence and with Salah and Mané occupying the right wing, the attacking threat there was already high. While this did open up spaces down the wings for Leeds to exploit, they had to be very careful and as can be seen from above, would look to cut off the passing options to prevent Liverpool from building out from the back. 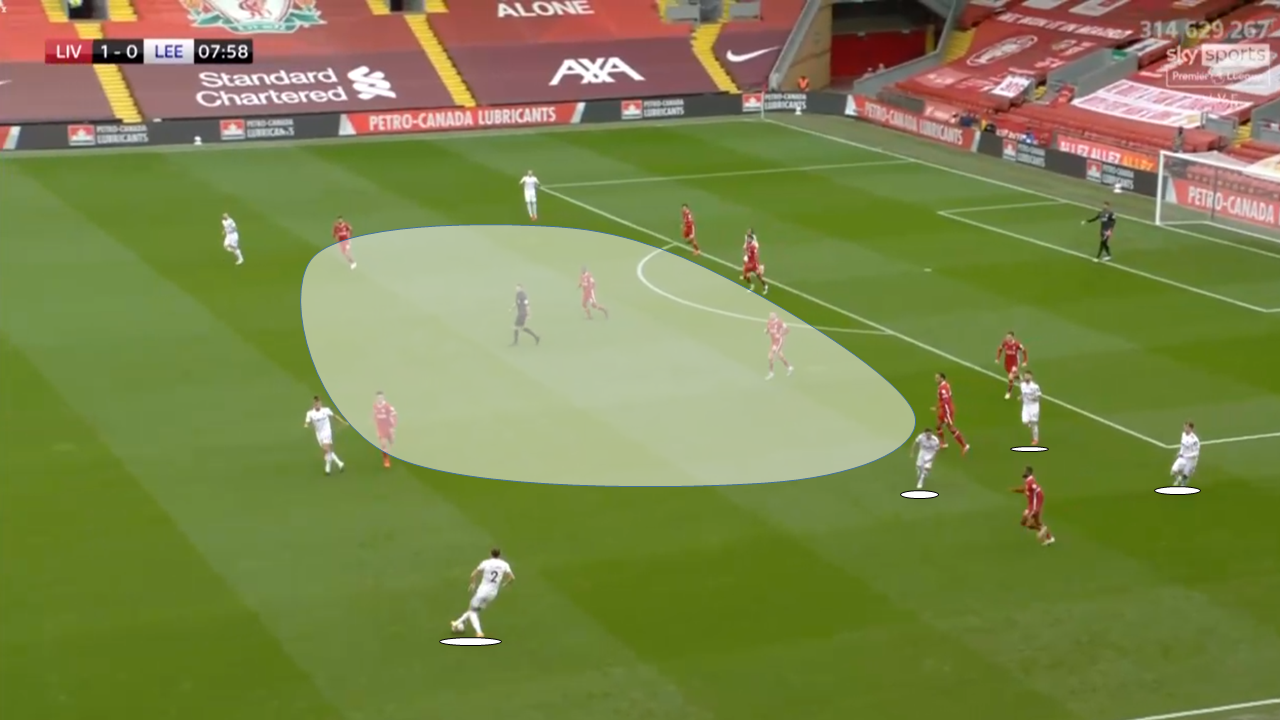 As we saw earlier, Leeds looked to avoid the central areas of the pitch when defending. The same was true in attack as well, with Bielsa’s side looking to overload the wings and leaving the centre relatively free. The wingers and midfielders would often move towards the flanks where they would look to engage in passing combinations before cutting through to the centre. Considering that Liverpool look to push their full-backs higher up, these tactics were a significant threat to the Reds’ defence.

Leeds channelled most of their attack to the wings with long passes and could then pass their way to the centre or put in a cross as well. What this meant for the Liverpool midfielders was that they would either have to drop very deep or to move to the wings to support their defenders and this often brought them out of position as well. 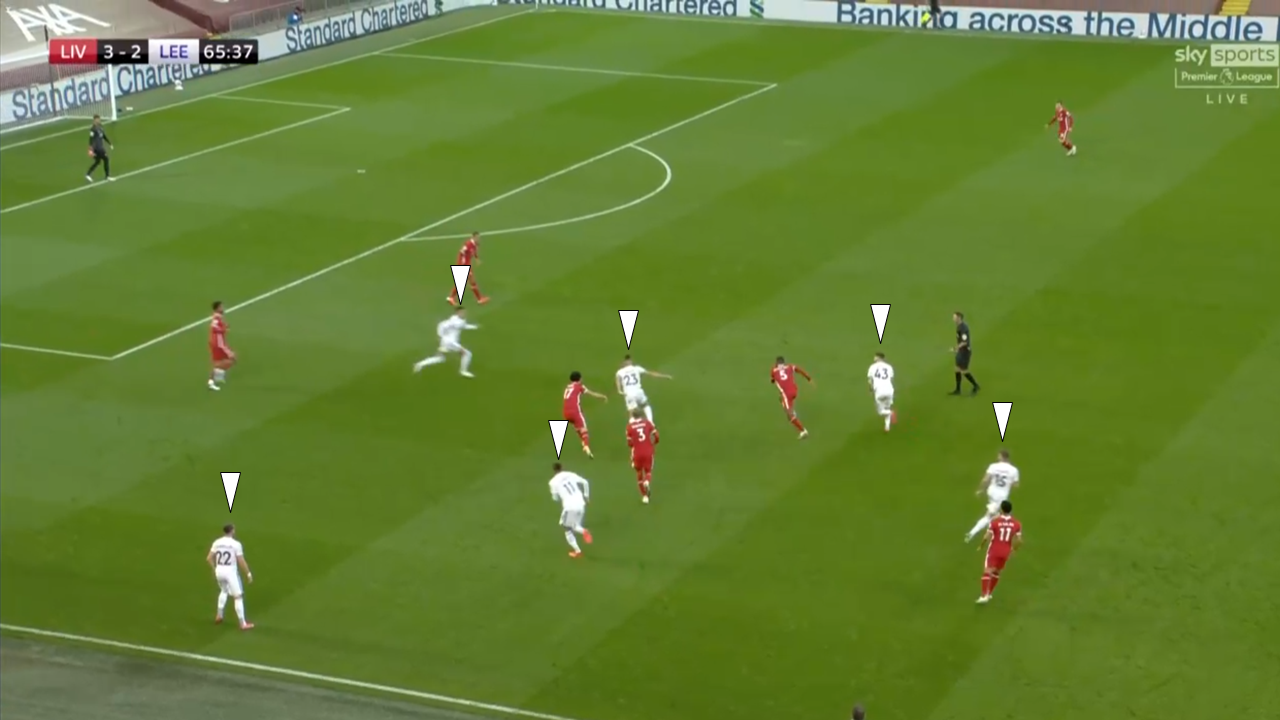 Another example of their overload down the wings is shown above. We see six of the Leeds midfielders and attackers playing very wide and cutting in towards the centre. The Leeds players occupy very wide areas of the pitch, forcing the Liverpool midfield and defence to follow them there in order to win the ball.

This leaves a massive gap in midfield that the Leeds players can then cut into in order to advance towards goal. This also allows the side to switch flanks easily and catch the opposition off guard as they would have to scramble back to defend any passes or crosses from the opposite flank. Such wing overloads were very crucial for Leeds to not just create attacks on their own but to also reduce the effect of the Liverpool full-backs. 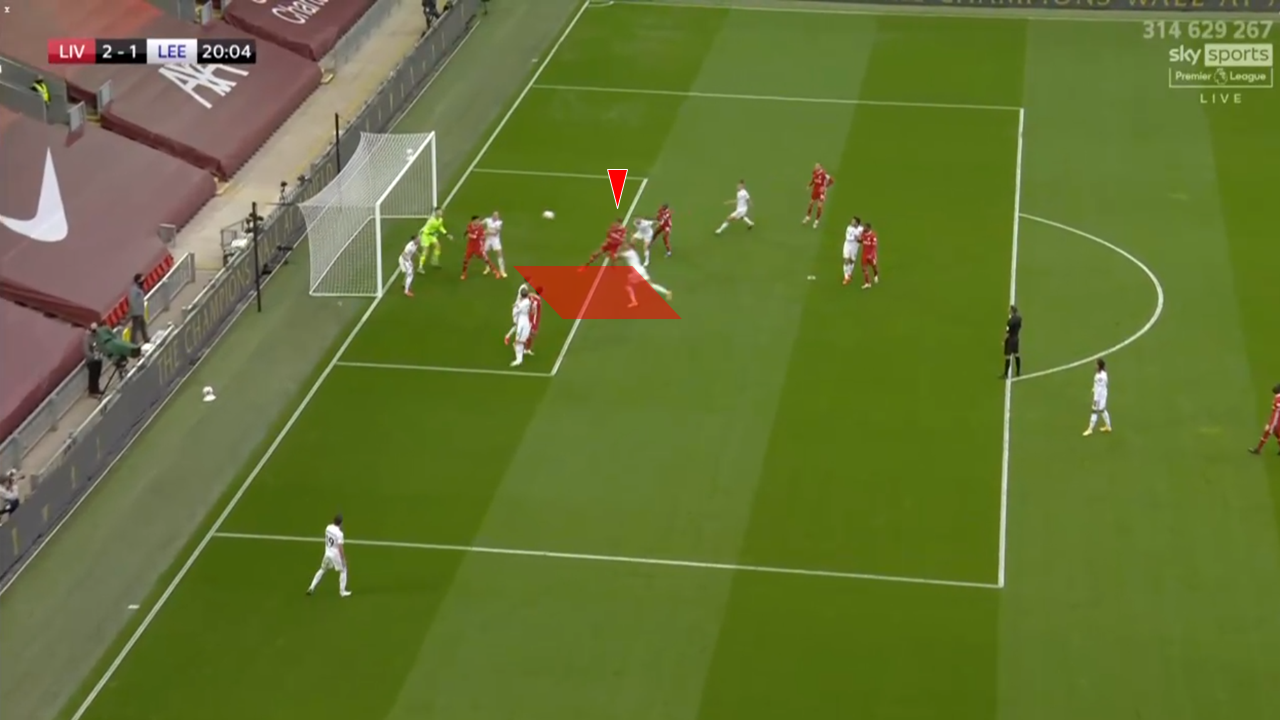 Three out of the four Liverpool goals were the result of set-piece situations and this must be a cause for worry for Bielsa. The Leeds defence seemed incapable of sorting themselves out during set-pieces and were often caught ball watching. Liverpool players were afforded too much space to run into and found themselves having free headers or shots on goal.

For Liverpool’s second goal, Van Dijk found himself at the end of the corner unchallenged and was able to cleanly head the ball home. The Leeds defenders had looked to man-mark the Liverpool players but as the ball is played in, they lose their man and are caught off-guard. Instead of following the attacker’s run, they all look to play the ball and the misjudgement leaves Van Dijk free in the box. The fact that Leeds pushed three players to the near post meant that the cross from the corner itself took them out of the equation and it was man for man in the box. It seemed like the Leeds side had their set-piece tactics mixed up and this meant that Liverpool could easily capitalise. 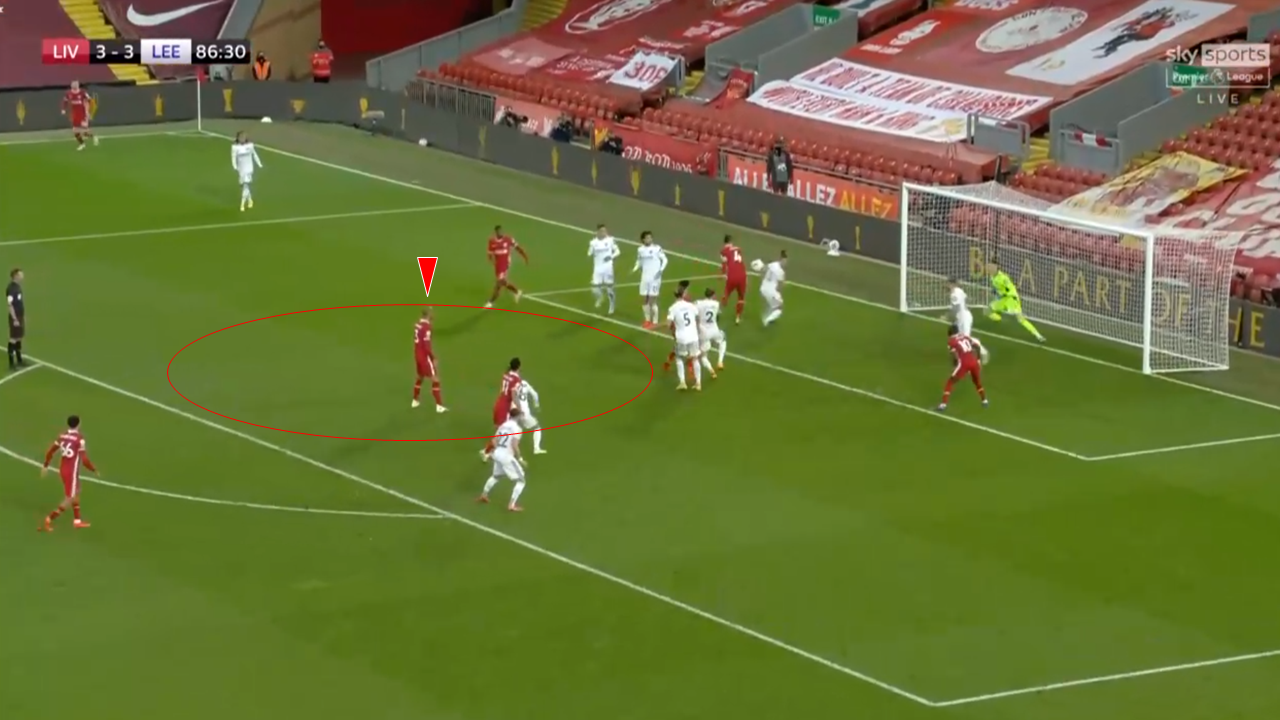 While the third goal also saw Salah receive the second ball freely and finish into the top corner, Leeds’ poor set-piece defence was more visible for the final goal. Liverpool once again looked to target the six-yard box with their delivery and once again Leeds looked to get numbers in the direction of the ball. The defenders looked to crowd the six-yard box where the ball was falling and while this somewhat put Van Dijk off guard and prevented him from scoring again, it left Fabinho completely unmarked near the penalty spot.

A poor clearance saw the ball fall to the Brazilian who had loads of space and with the Leeds defenders scrambling to win the ball, he could draw a foul in the box and give his side a crucial late penalty. Once again Bielsa’s side were caught out owing to their poor set-piece defending and they paid the price, undoing the good work they had done in attack.

An early game of the season contender, Liverpool managed to take the three points eventually as they have done so well in the past. Their ability to grind out results even when they are not at their best sets them apart from the rest and shows just why they are such a dominant force in world football. Klopp’s side travels to Chelsea for their next fixture and if the last meeting between the two is anything to go by, we could be in store for another goal-fest.

As for Leeds, their return to the top flight may not have ended in victory but their performance has surely not gone unnoticed. They showed that they could take the game to the opposition and if they had avoided some self-inflicted damage, they may have even come away with a better result. Leeds host fellow promoted side Fulham at home next week and Bielsa would want to put this fixture behind his side and get their first three points under the belt. If they continue this intensity and form through the season, there is no telling where this promising Leeds side could finish.