In this tactical analysis, I will provide an analysis of the tactics used by Jürgen Klopp and Mikel Arteta in the 2020 Community Shield. 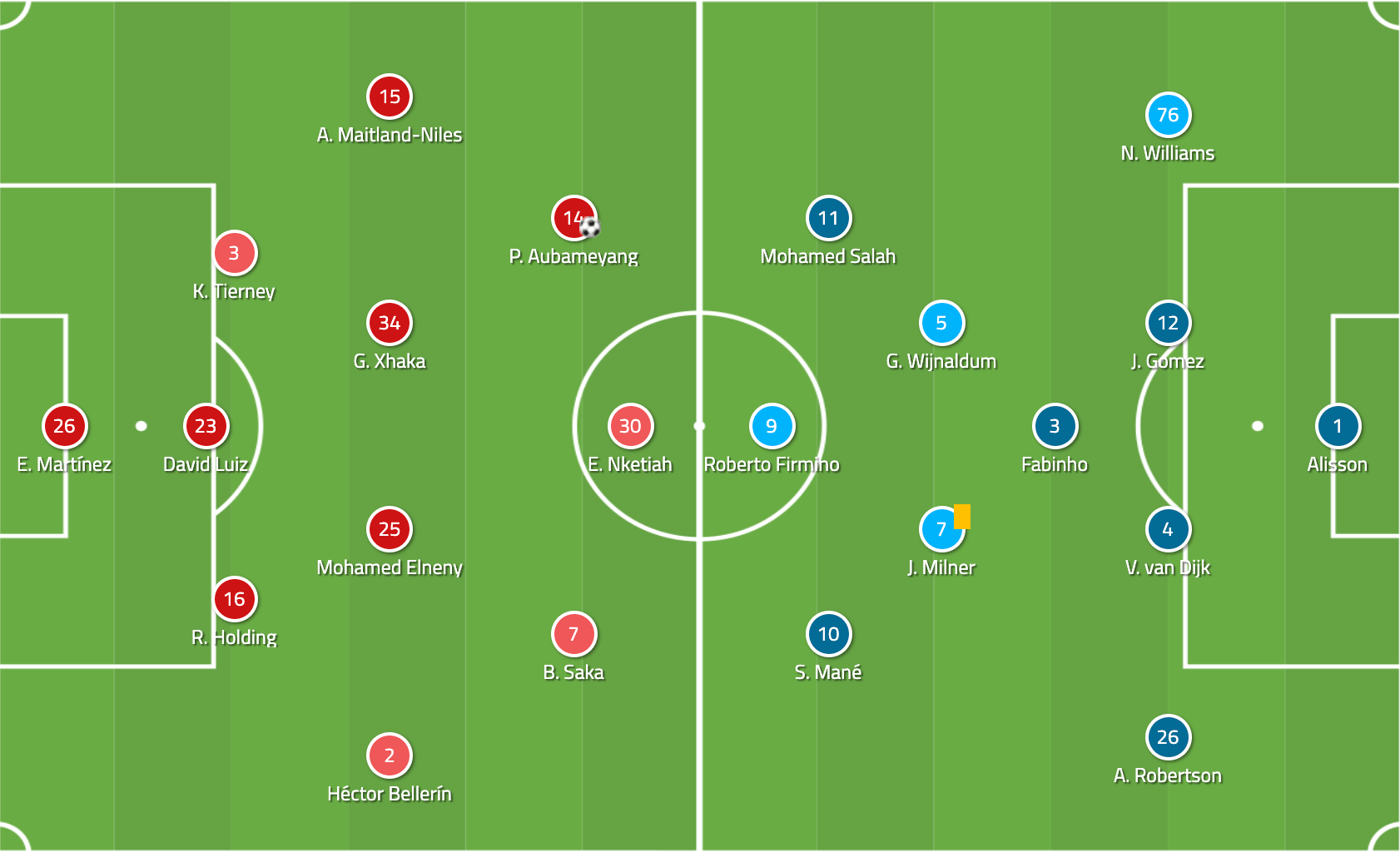 Due to a shortened pre-season, neither side were particularly fresh coming into the match, particularly Arsenal, who fielded a much more rotated side than their opponents.

Arsenal lined up in the 3-4-3 that has become the preferred formation after Arteta was hired. Emiliano Martínez started in goal. Rob Holding, David Luiz, and Kieran Tierney played as a back three. Granit Xhaka and Mohamed Elneny started as the midfield double pivot. They were flanked by Héctor Bellerín and Ainsley Maitland-Niles who played as wingbacks. Pierre-Emerick Aubameyang and Bukayo Saka played as wide forwards, while Eddie Nketiah started up top.

Liverpool lined up in their typical 4-3-3. Alisson started in goal. Andrew Robertson and Neco Williams played as the fullbacks. Virgil van Dijk and Joe Gomez started in central defence. James Milner and Georginio Wijnaldum started in a midfield three with Fabinho at the base. Sadio Mané, Mohamed Salah, and Roberto Firmino were the front three.

When Liverpool were playing out from the back, Arsenal pressed them in a fashion which forced the Premier League champions to create superiorities in ways they are not accustomed to. Arsenal’s wide forwards would press Liverpool’s centre backs while keeping the Liverpool fullback behind them in their cover shadow. Saka was responsible for Van Dijk and Robertson, while Aubameyang was responsible for Gomez and Williams. To ensure that Liverpool could not play through the centre, Nketiah was tasked with marking Fabinho. When Nketiah jumped out to press, he would attempt to keep Fabinho in his cover shadow, but Elneny would push up to cover Fabinho. As we can see in the diagram shown below, Saka is responsible for Liverpool’s left side, while Aubameyang is responsible for Liverpool’s right, with Nketiah marking Fabinho. 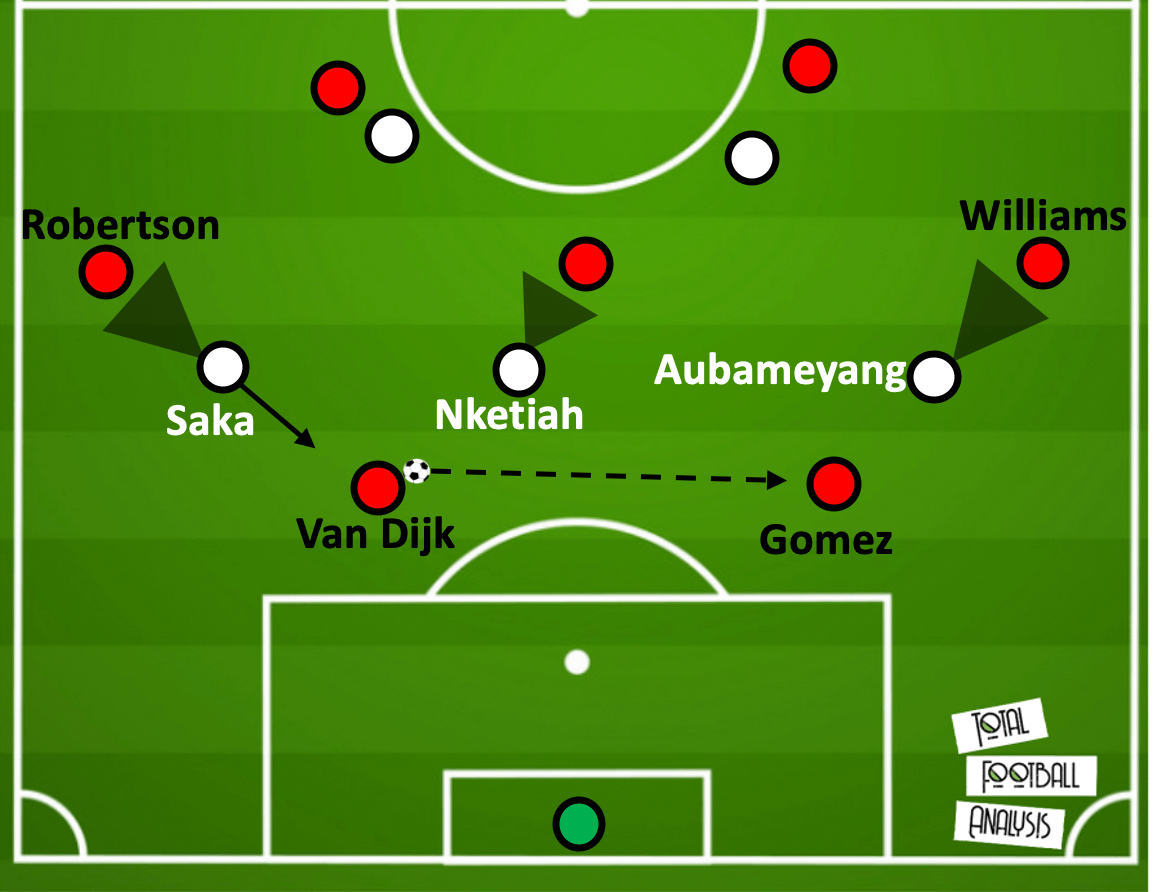 We can see an example of this in the image shown below.

Liverpool’s (first half) solution to Arsenal’s pressure was to create a back three by means of having one of Robertson or Milner drop into the left back position, creating a back three. If it was Milner, Robertson could afford to be more advanced. However, Liverpool no longer had a 3v2 overload in the midfield, so Firmino was needed to progress play via the centre. When Milner was in the left back position, Saka switched his pressing responsibility to Milner, while Bellerin would push up in order to deal with Robertson. We can see examples of both of these scenarios below. We can see Robertson staying in his original position rather than pushing higher in the image shown below, we can also see how Elneny would push up to cover Fabinho when Nketiah jumped out to press.

In the next example, we can see how Milner would drop to create a back three, with Saka and Bellerin changing their pressing roles accordingly.

When it was Arsenal’s turn to play out from the back, they employed some interesting mechanisms to attempt to play through one of the world’s best presses. Although Tierney played on the left of a back three on paper, in possession he would play as more of a traditional fullback. As such, Luiz and Holding were the centre backs in possession. The trio of Luiz, Holding, and Martinez created a 3v3 against Salah, Mané and Firmino. Xhaka and Elneny played as a double pivot, and they looked to receive in behind Liverpool’s first line.

The narrow positioning of Arsenal’s back three (including the goalkeeper) coupled with the double pivot caused some interesting positional dilemmas for Liverpool. Nketiah looked to pin Fabinho back, effectively creating a 2v2 in midfield. Liverpool’s remaining midfielders (Wijnaldum and Milner) were forced to take up a higher position to ensure Arsenal’s double pivot could not receive behind the first line without immediate pressure. Salah, Mané, Firmino, Wijnaldum, and Milner were all pressing in central positions, creating space for Tierney and Bellerin to receive in wide areas. If one of the Liverpool players decided to press out wide, it would create space for Arsenal to play through the centre. If Fabinho decided to push higher, it would mean that Nketiah was available to receive if Arsenal wanted to play more directly. In the image shown below, we can see an example of Arsenal’s build-up structure. Tierney and Bellerin are in space, Milner and Wijnaldum have been forced higher, while Elneny and Xhaka look to receive just beyond the first line.

Arsenal’s exploitation of Liverpool’s right side

As they progressed higher up the pitch, Arsenal looked to exploit Liverpool’s right side. Arsenal could have possibly identified Williams as a weak point of Liverpool’s back four. Arsenal looked to exploit this weakness in a multitude of ways. The first was was by overloading Liverpool’s left side, to isolate Aubameyang or Maitland-Niles on the right. This was usually done with an overlapping run from Bellerin, and Saka cutting inside, who is then able to switch the play. The next way Arsenal looked to exploit Liverpool’s right was with rotations and overloads on that side. Maitlaind-Niles and Aubameyang would interchange positions, with one staying wide while the other moves into a more central position. This either created space for the wide player or the player in the more central position. Arsenal also utilised Tierney to overlap and create a 3v2 overload against Williams and Salah.

In the image shown below, we can see how Arsenal have overloaded Liverpool’s left in order to isolate the right side. We can see how Aubameyang is 1v1 against Williams, and Maitlaind-Niles has tucked in more centrally. This particular switch of play led to Arsenal’s goal.

We can see the next way Arsenal looked to exploit Liverpool’s right in the example shown below. Tierney is making an overlapping run, Aubameyang is drawing pressure while Maitland-Niles has tucked in once again. This creates a 3v2 against Salah and Williams, forcing Liverpool to shift across.

In the 59th minute, Klopp made a double change. Takumi Minamino and Naby Keïta came on for Milner and Williams. With this change came a change in shape, with Liverpool switching from a 4-3-3 to a 4-2-3-1. Salah became the centre forward, Mané became the right winger, Minamino played on the left, while Firmino was moved into attacking midfield. Keïta and Wijnaldum became a double pivot. Gomez was moved to right back while Fabinho played alongside Van Dijk at centre back. This tactical change from Klopp helped Liverpool greatly in multiple facets of their play. The first way this change was beneficial was defensive. Moving Gomez to right back helped Liverpool defend the right side after Arsenal had repeatedly targeted that side.

The second way in which a change to a 4-2-3-1 helped was that having Minamino on the pitch meant that Liverpool had an extra player in between the lines. This helped ball progression which was poor for Liverpool’s standards before the switch. Minamino’s addition also aided Liverpool in counterpressing, as the added forward player increased compactness high up the pitch as Liverpool lost the ball, and thus could counterpress more effectively. In the example picture below, we can see how both Minamino and Firmino are occupying space in between the lines, rather than just Firmino as was the case beforehand.

Arguably the most beneficial aspect of the change was that Liverpool could play with Robertson consistently higher, rather than needing the Scottish international or Milner to drop to create a back three. This was because Gomez at right back performed this role, not advancing but rather staying deep to create a superiority in build-up. With Gomez’s less advanced position on the right,  Liverpool focused their offensive play down the left. This is reflected when looking at crossing statistics. Robertson crossed the ball 15 times, while Williams attempted 3 crosses. We can see Liverpool’s three at the back, with Gomez, Fabinho, and Van Dijk, in the image shown below. We can also see Liverpool’s new-look midfield after the change, with Keïta and Wijnaldum forming a double pivot.

While some argue that the Community Shield should be considered as a preseason friendly, Arsenal made a very positive start to the 2020/21 campaign, with Arteta picking up his second piece of silverware since being hired. Arsenal travel to Fulham for their first league match of the season, with the Gunners looking to make a positive start in their push for a Champions League position come next season.

As for Liverpool, the Community Shield has evaded them yet again, after their loss last year on penalties against domestic treble winners Manchester City. Klopp’s men also face a newly promoted side, they host Leeds at Anfield, looking for a strong start in their bid to retain the Premier League title. 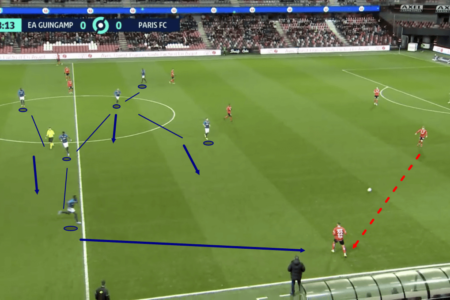 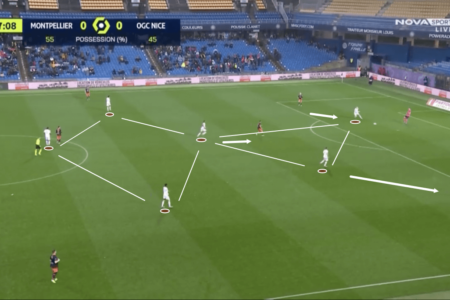 After winning Ligue 1 with Lille last season, pipping PSG to the title by just one point, Christophe Galtier embarked […]