Phoenix Rising welcomed Las Vegas Lights to Phoenix for their third match in as many weeks. The trend appeared to be quite positive for Phoenix; following their 3-3 draw which saw them allow two goals in extra time, Rising returned to Las Vegas a week later, defeating Las Vegas 2-0. In Phoenix, the positive trend continued on Friday night, seeing Rising put five goals past Las Vegas in a 5-1 victory, cementing their place at the top of the USL Championship Group B table.

This tactical analysis will examine the tactics used by both Las Vegas Lights and Phoenix Rising in their match. The analysis will look at how Rising pressed Las Vegas, how they relied on runs from deep, and how Las Vegas were mildly successful at overloading in order to isolate individuals in 1v1 situations. 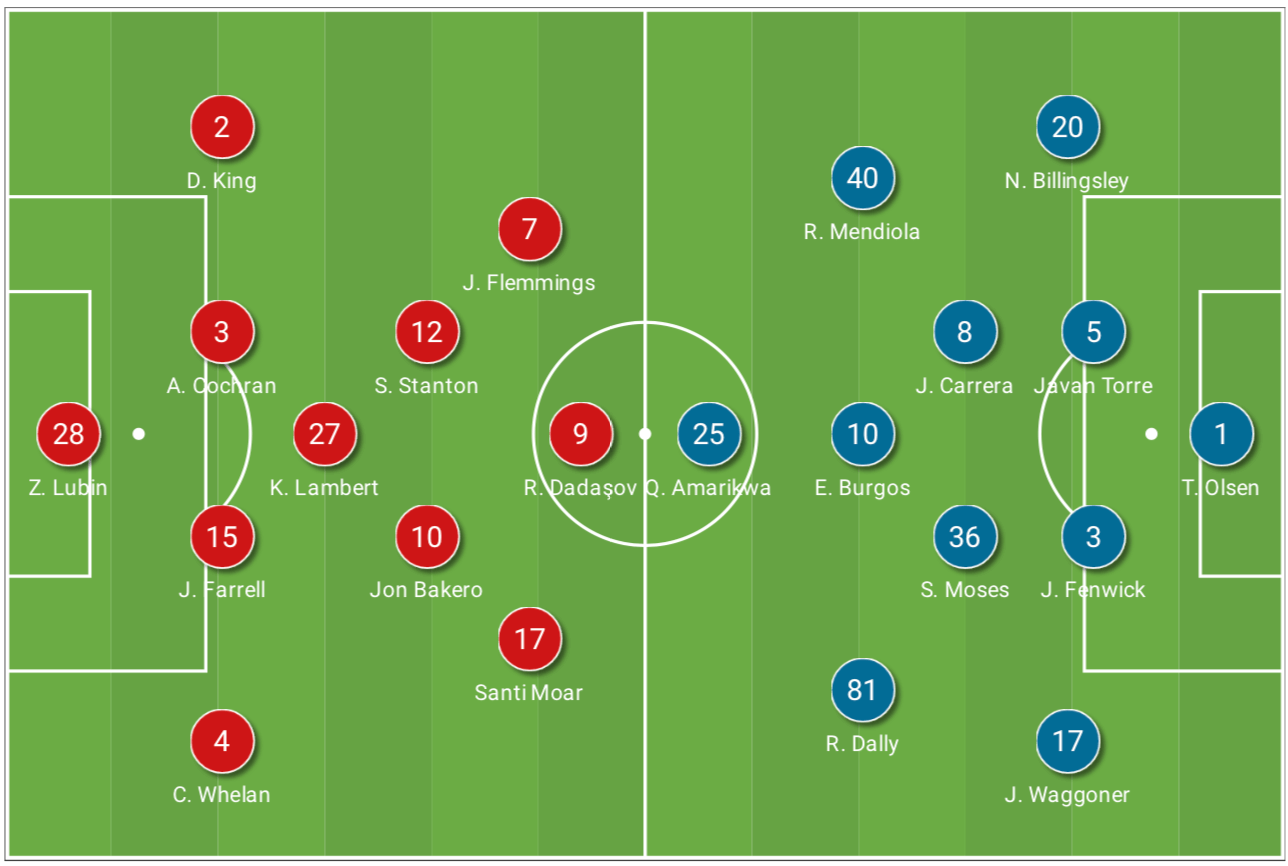 Frank Yallop sent out Las Vegas in a 4-2-3-1 formation with Thomas Olsen in goal. Their two centre-backs Johnny Fenwick and Javan Torre with Jaiden Waggoner as the left-back and Noah Billingsley as their right-back. Their two defensive midfielders were Seth Moses and José Carrera García. In front of them was Raúl Mendiola, who was flanked by Quincy Amarikwa on the right and Junior Burgos on the left. Their starting forward for the evening was Rashawn Dally.

Zac Lubin started on goal for Phoenix Rising as manager Rick Schantz sent his squad out in their typical Barcelona-esque 4-3-3. A. J. Cochran and Joey Farrell started as centre-backs with Darnell King left of them and Corey Whelen to the right. Kevon Lambert started as their holding midfielder with Sam Stanton and Jon Bakero in front of him in the midfield. The front three consisted of Junior Flemmings on the left-wing, Santi Moar on the right-wing, and new signing Rufat Dadashov, who has spent time in the lower leagues of the Bundesliga, as the centre-forward.

Las Vegas started the match by trying to build from the back in order to progress their way into Phoenix’s half. Unfortunately for the Lights, Phoenix’s press caused a lot of problems for them, forcing them to send the ball long so consistently that eventually, Las Vegas abandoned their build-up and looked to win the 50/50 balls. 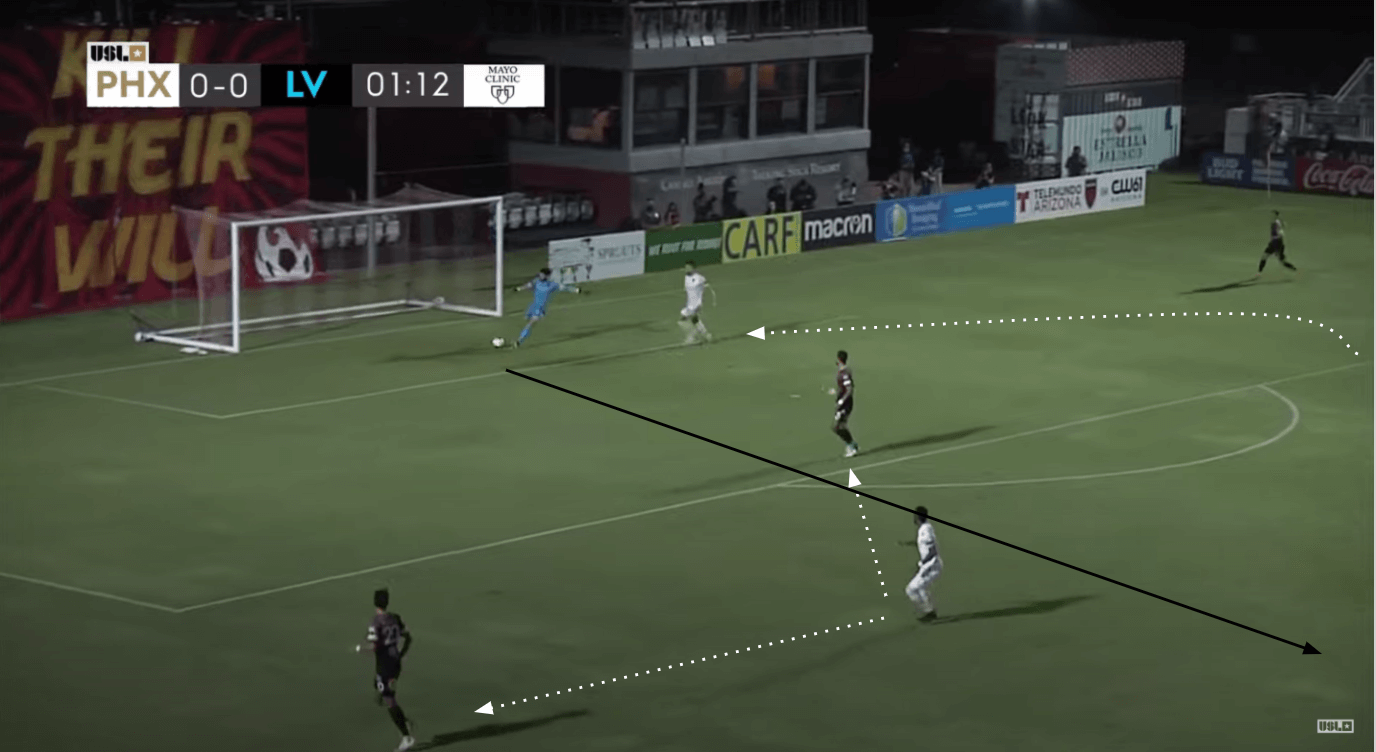 The image above highlights how effective Phoenix’s press was. Early in the match, Las Vegas was forced to play the ball back to their goalkeeper via their centre-back. When they did, Rufat Dadashov’s role was to provide pressure on the ball. His runs would start by pressuring the centre-back and follow the ball, which in this case went to the goalkeeper. As Dadashov pressed, Junior Flemmings also worked to maintain pressure on multiple opponents with his positioning. In the image above, he was able to pressure both the other centre-back (who wasn’t in the best position to support his goalkeeper) and the right-back. Flemmings’ positioning forced the goalkeeper to pause, ultimately resulting in a poor pass that led to Rising getting a shot on target. 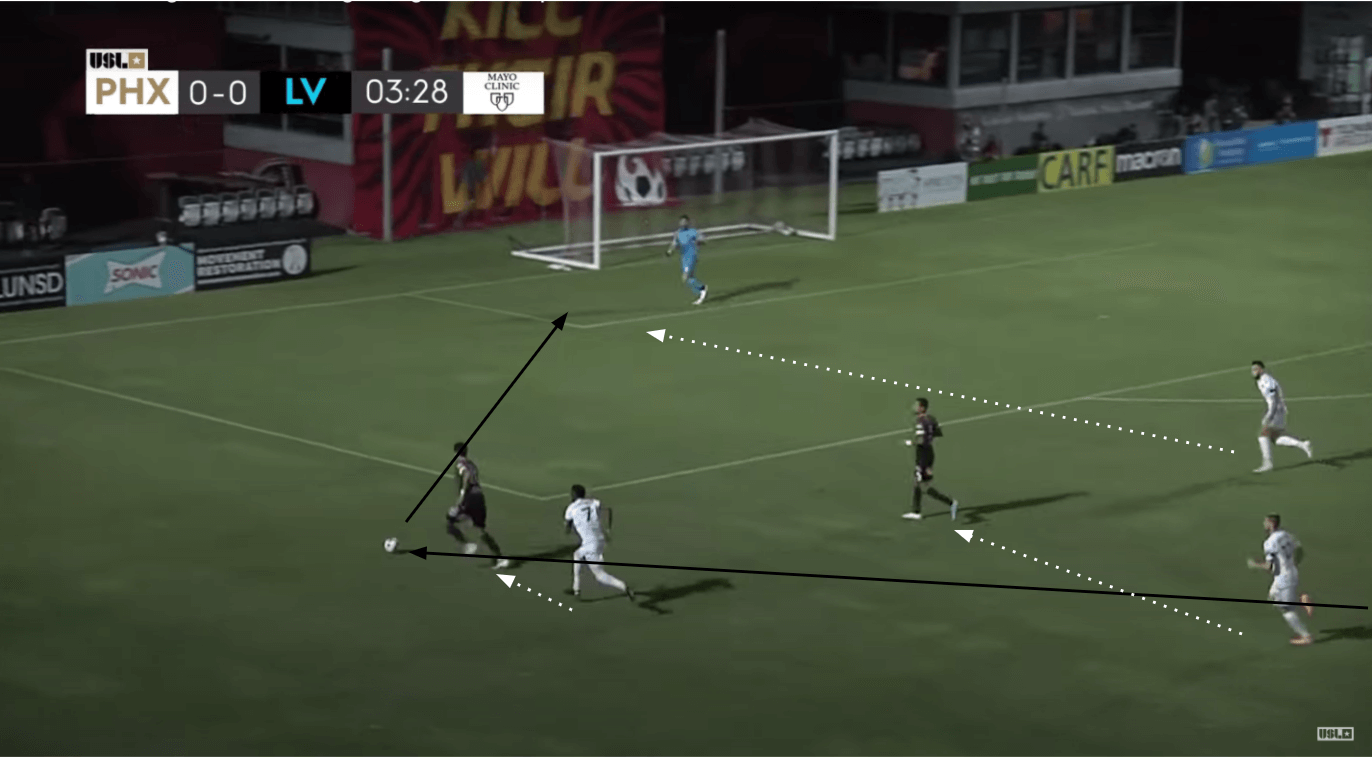 Rising’s pressing triggers were pretty clear early on: whenever Las Vegas would have their back to goal, Phoenix would take the opportunity to close them down and reduce the space. An example of this is shown above. An errant pass by Kevon Lambert found Las Vegas running towards their own goal as they gained possession. As the ball was traveling, Flemmings’ movement triggered the press. Phoenix basically implemented the “if he goes, we all go” rule, putting Las Vegas under immense pressure. As the ball was passed backwards, the keeper had no choice but to send it out of touch, with the press resulting in Phoenix getting a throw-in in their own attacking third. 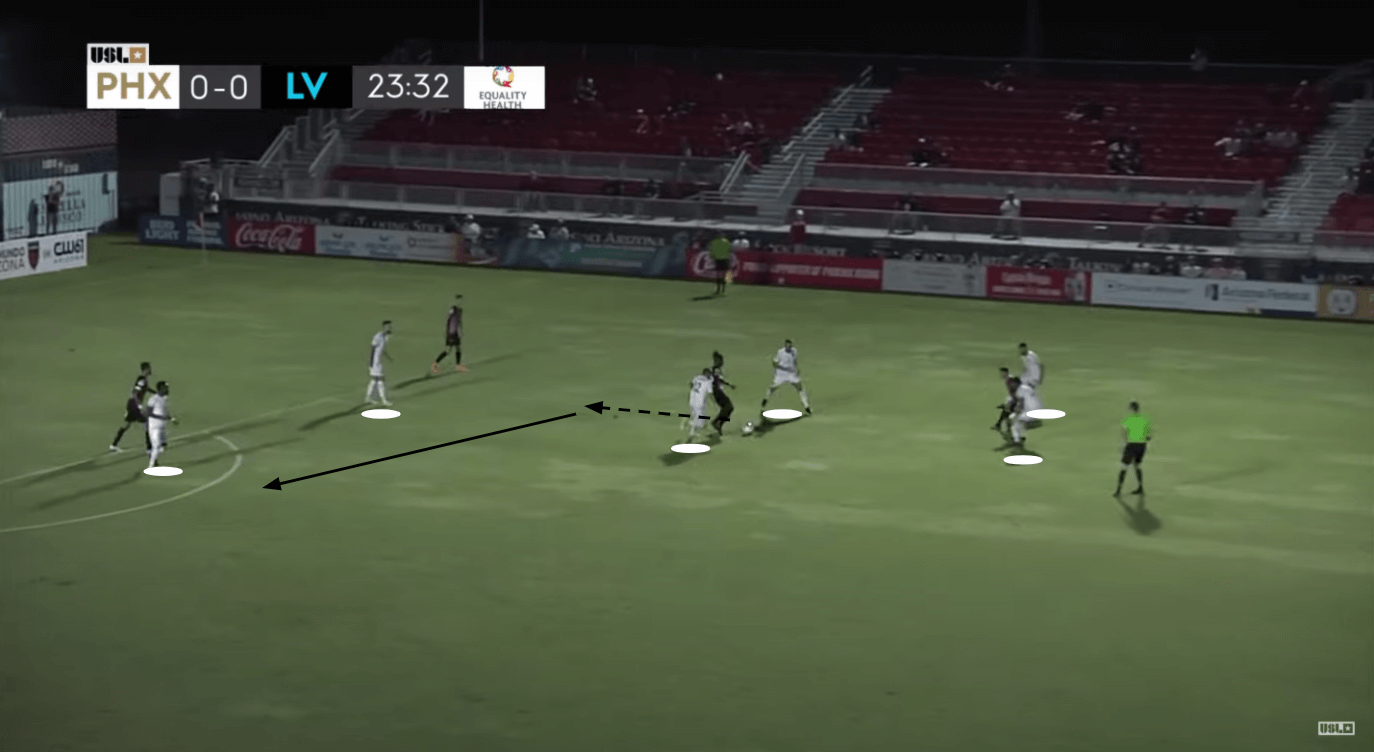 Even when Las Vegas would sustain pressure in their own half, they didn’t have an escape-route when Rising would continue to send numbers forward. This led to them being dangerously outnumbered in their own half. In the image above, Las Vegas had actually entered the middle third of the pitch before sending the ball backwards. Phoenix actually outnumbered Las Vegas in this situation (6 vs. 4). This meant that as Las Vegas went back towards their own goal, they weren’t actually escaping pressure; they were just moving into more of it. Ultimately, the Las Vegas player had to turn and play a blind pass, which landed directly at the feet of Flemmings, who was unable to find Dadashov as he looked to get in behind the Las Vegas defence. The drinks break around the 30th minute allowed Las Vegas to gather as a team and decide to avoid creating problems for themselves by trying to play out from the back.

Runs from deep get Phoenix on goal

While Phoenix was unsurprisingly able to take advantage of their transitions, they also did well to make runs from their midfield in behind the defence. These runs from Stanton and Bakero were largely unmarked and caused Las Vegas a lot of problems with their defensive organisation. 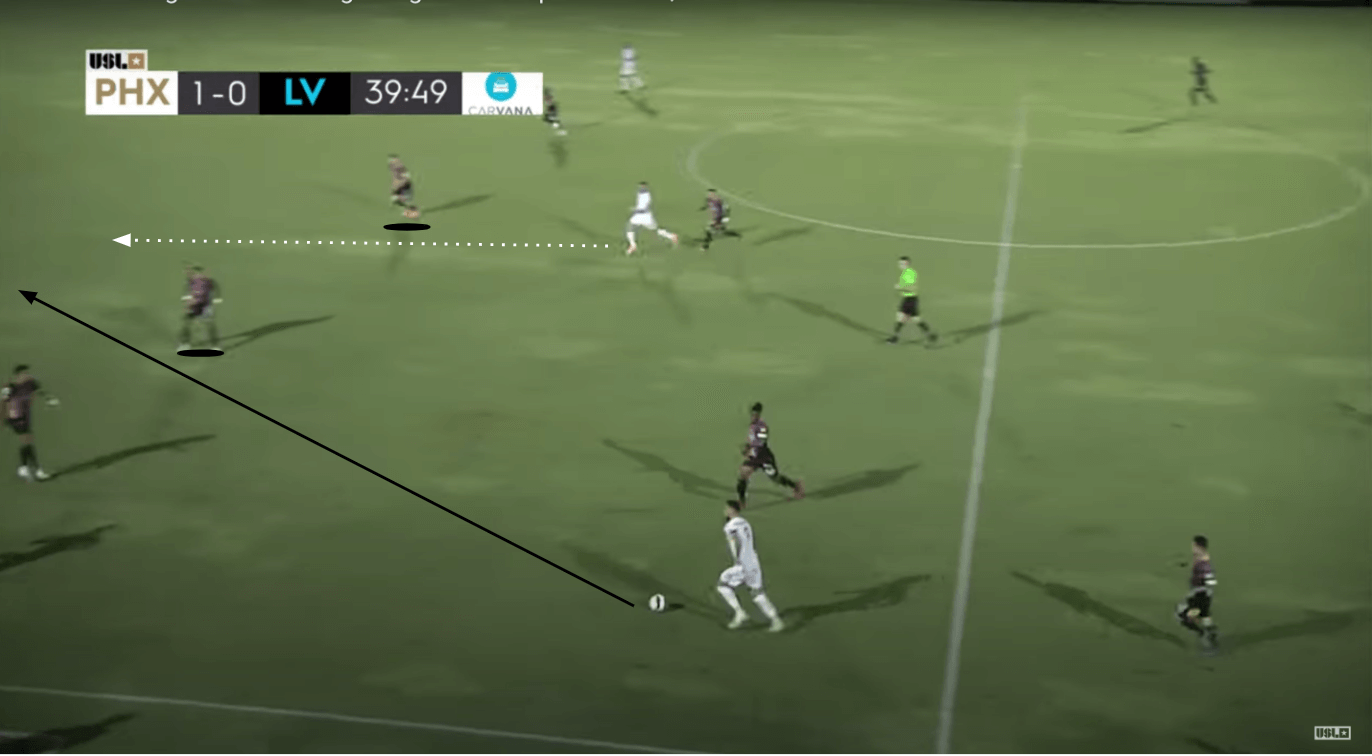 Some runs from the midfield came during the transition to attack. This was able to occur due to the presence of Dadashov. Dadashov is a centre-forward who can drop down into the midfield and maintain possession for himself. In this instance, he dropped down to get the ball on the left flank. Flemmings was able to pin the right-back, allowing Dadashov to receive the ball without being put under pressure. This allowed him to turn and face the defence. As he did, Stanton made a run through the back line. Stanton ran between the two centre-backs, causing confusion between them about who should pick up his run. Dadashov’s ball was a little overhit and Las Vegas’ keeper was able to cut off the opportunity, but Stanton was still able to get free in behind. 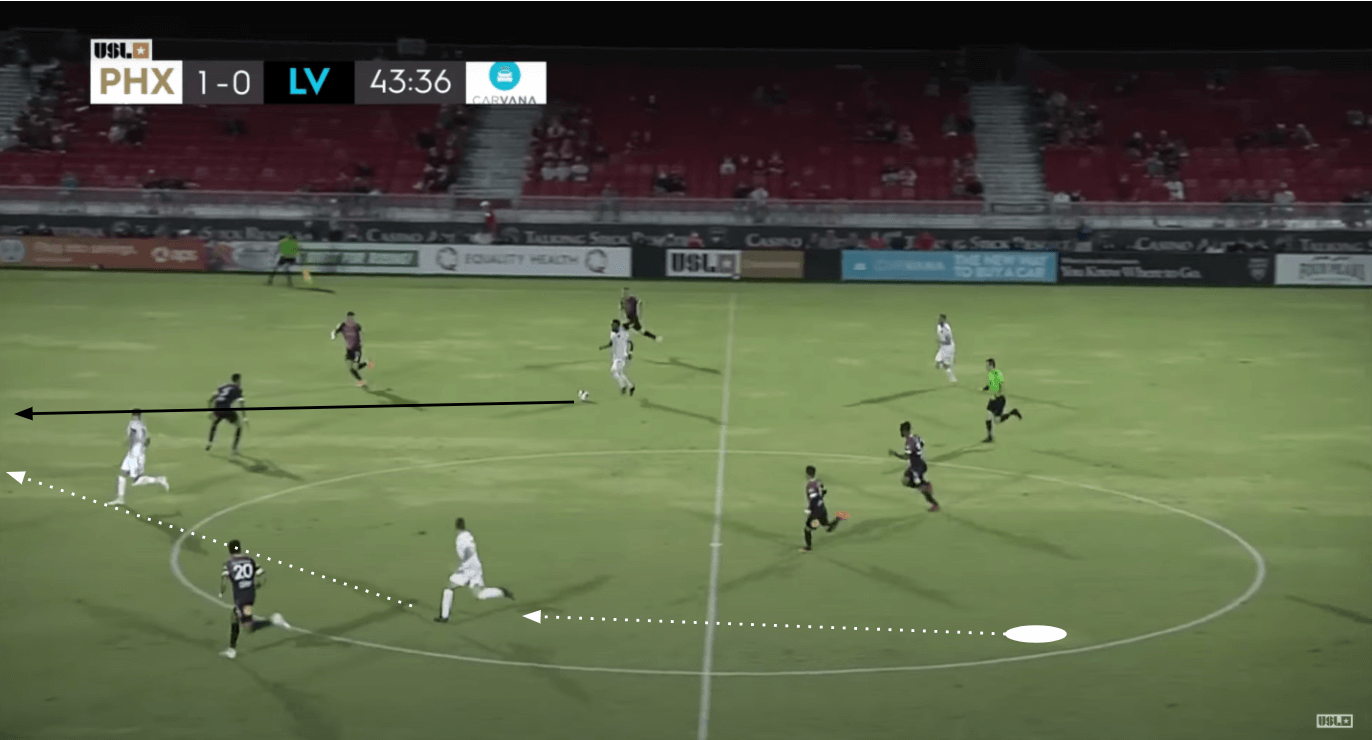 Phoenix again looked to make runs from deep when in transition, and this time it led to a goal. Junior Flemmings found himself in possession after a great tackle by Corey Whelen. Dadashov ran forward, forcing the defence back with him. Eventually, the Lights’ defence stopped and ‘held the line.’ Unfortunately for them, Santi Moar had made his defensive positioning on the other side of the pitch. As Moar’s defender (the right-back) looked to hold his positioning with the rest of the defensive line, Moar angled his run in order to stay onside, creating an extra second for Flemmings to be able to recognise the run and play him in. From there, it was Moar and Dadashov in on goal, with the latter finishing off the chance and doubling Rising’s lead in the process. 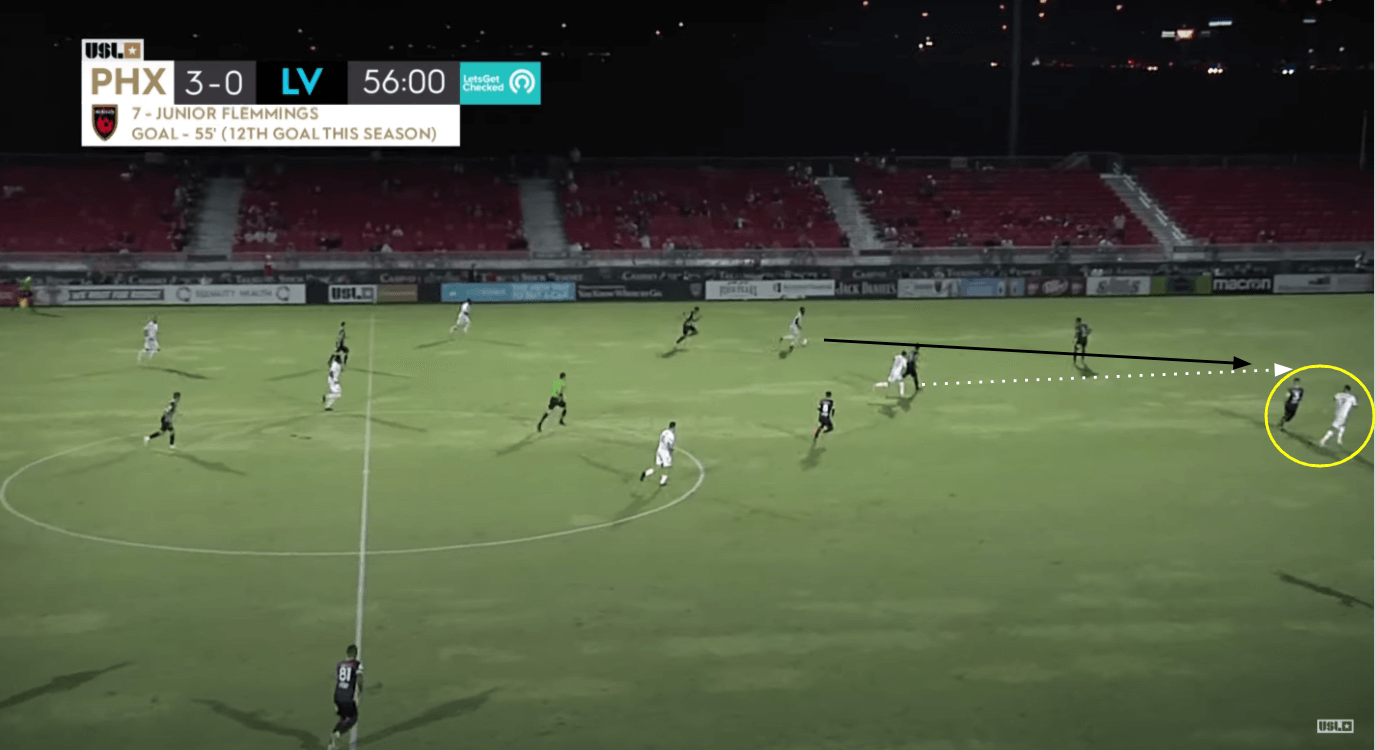 Phoenix found themselves up 3-0 after some individual brilliance from Junior Flemmings. Seconds later, they scored again after a great run from Stanton in behind. The goal started with Dadashov and his positioning between the two centre-backs. The right centre-back felt like he needed to cover him closely, creating a large gap between himself and the right-back. Stanton exploited this gap by getting goal-side of his marker and running in behind. The right-back was frozen because he had to decide if he should mark Flemmings or protect the inside of the pitch. At that point, Flemmings was able to find Stanton in stride, putting the ball on his foot with a brilliant pass. Stanton used his first touch to control the ball and his second to bury the chance, ending any hope for a Las Vegas comeback in the process.

Las Vegas really struggled to get anything going in terms of attack against Phoenix. A lot of these struggles occurred because of their insistence upon them building from the back. When they weren’t trying to progress up the pitch with their possession, they would have to win multiple aerial battles in order to find themselves in the opponent’s half. Even when they did, they were unable to execute well enough to create too many solid chances for themselves. What did seem to work against Phoenix’s relentless defensive effort was attracting pressure to overload an area in order to isolate an individual in a 1v1 situation. 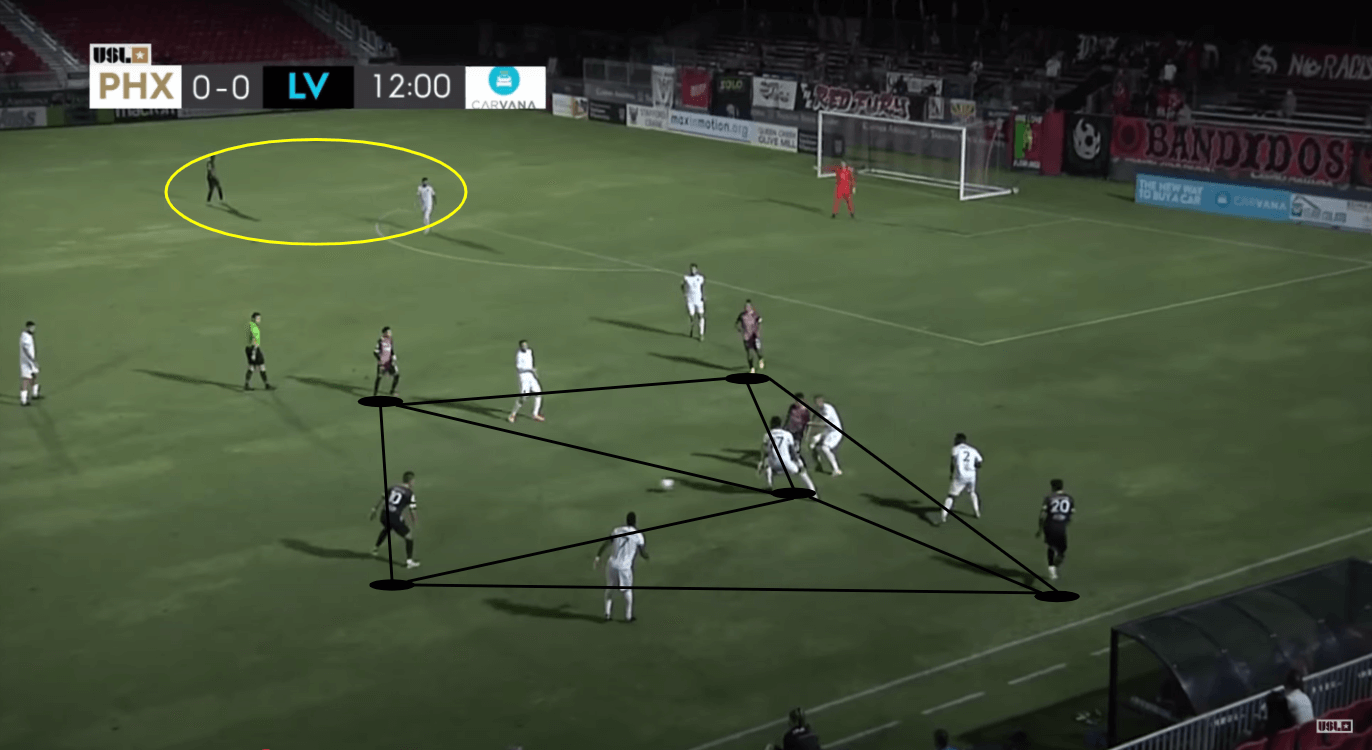 The image above shows exactly that. Las Vegas was able to construct a pretty good passing stricture that attracted six Rising defenders on the right side of the pitch. They were able to attract all of these defenders while still only committing one fewer player to the cause. This allowed them to create a 1v1 on the left side of the pitch with Junior Burgos against Corey Whelen. Unfortunately for them, they were unable to play a quality ball to Burgos as Whelen was able to read the pass and intercept it. 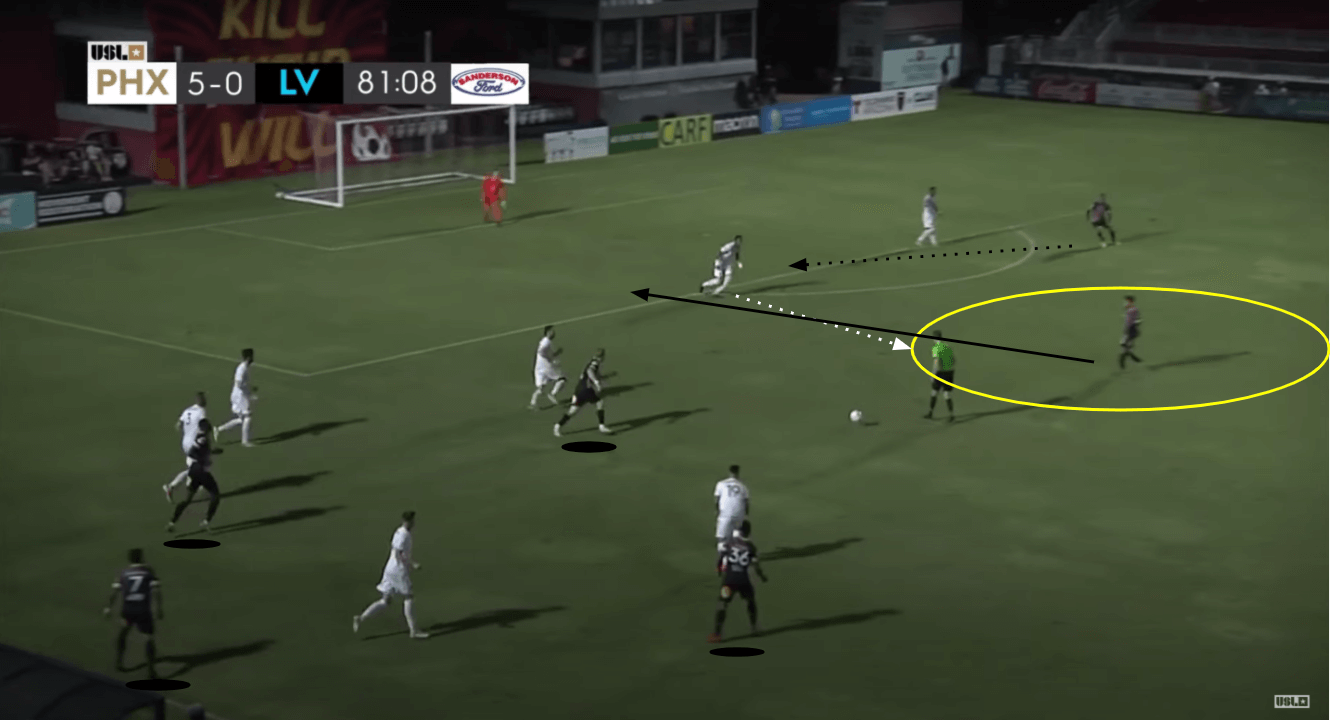 Las Vegas’ goal came late in the match, but it came through their ability to attract pressure when in possession. They were able to attract five Rising defenders on the left side of their attack while only using four attackers to do so. Just like they did previously, they kept a man open (Grant Robinson), this time in the centre of the pitch. This adjustment allowed them to actually find the man who was open in space. From there, Robinson was able to slot in Bryan de la Fuente, who was able to run in behind Lambert who was positioned on the back line for the run of play. While they did see some success with this, ultimately they weren’t able to find enough of it throughout the match.

Rising’s continued success against Las Vegas has seen them cement their place at the top of USL’s Group B. While there was certainly talk of having to play a third game against the same opponent possibly being a struggle, Phoenix got the better of Las Vegas on a fairly consistent basis, including the 3-3 draw earlier in the season. Las Vegas looks to rebound against LA Galaxy II on Tuesday, while Phoenix will welcome back San Diego Loyal to Arizona next Saturday.