League One side Lincoln City hosted the defending Premier League champions, Liverpool, on Thursday night in the third round of the EFL Cup. After finishing 15th in the third tier last season, Lincoln City jumpstarted this campaign by winning their first five matches in September. The Reds began their league title defence in a similar manner, defeating Leeds United and Chelsea so far. This tactical analysis will examine the game plans of both sides and evaluate how Liverpool’s tried and true pressing style of play along with individual ability, helped them control the match. 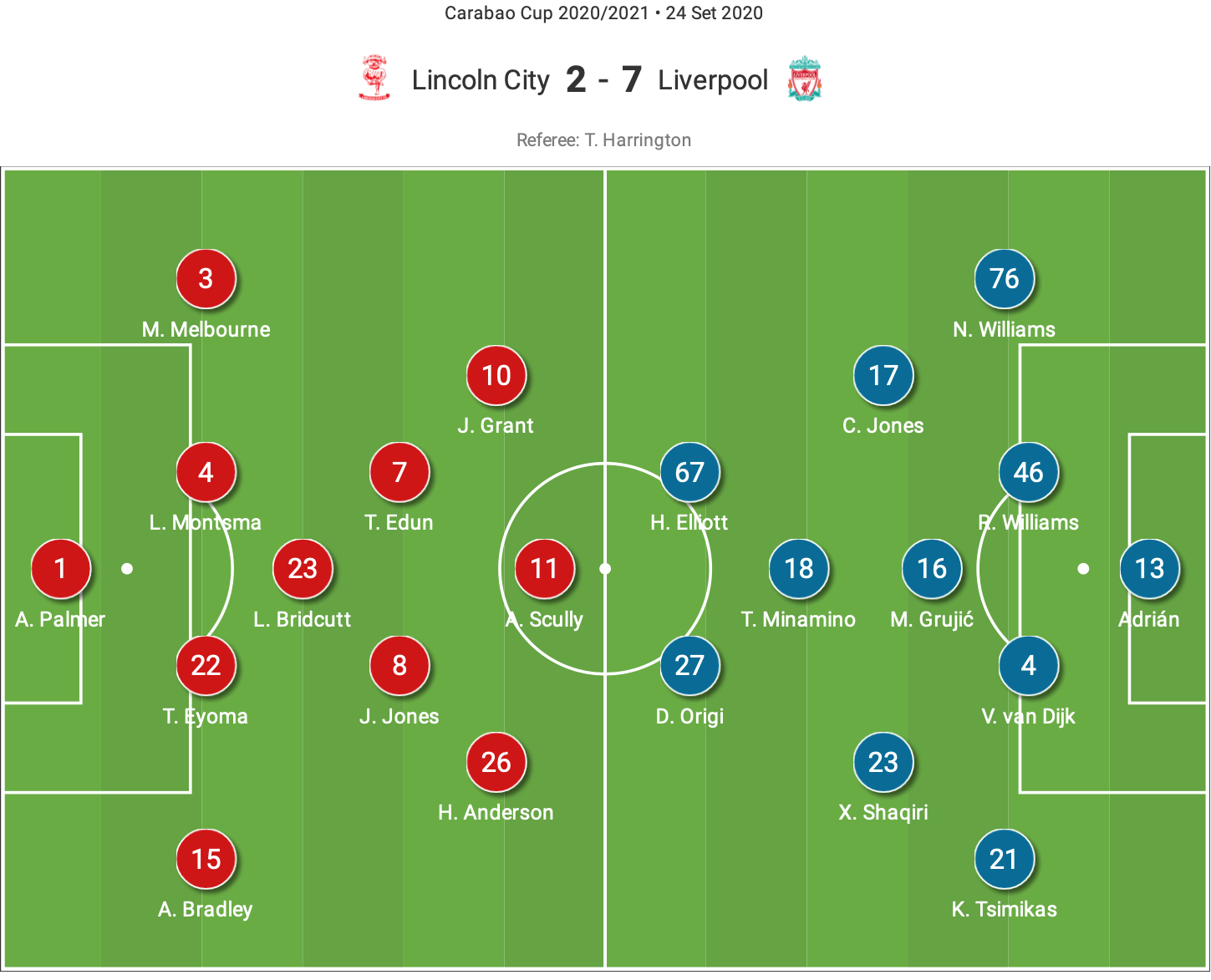 The visitors came out in a mixed starting eleven of veteran and youth players, as predicted. Adrián started in goal behind a back four of Neco Williams, Rhys Williams, Virgil van Dijk, and Konstantinos Tsimikas. Curtis Jones, Marko Grujić, and Xherdan Shaqiri formed a midfield group behind a free-roaming Takumi Minamino. Harvey Elliott and Divock Origi started as the primary front attackers. Rhys Williams and Tsimikas made their professional debut for the club, as did substitute Diogo Jota later in the match.

Unsurprisingly, Liverpool controlled the vast majority of possession while Lincoln City defended in a low block. The back line could comfortably sit on the ball and look for gaps in the defence. There were multiple moments in which Lincoln City successfully fended off Liverpool’s various attempts. Below, the hosts’ defensive block sacrifices space wide, as is typical of such defending. After the opposing pass is made into the wide area, Anderson does well to mark the passer who attempts a run into the opened half-space. This stalls Liverpool’s attacking action and forces a back pass to reset possession. 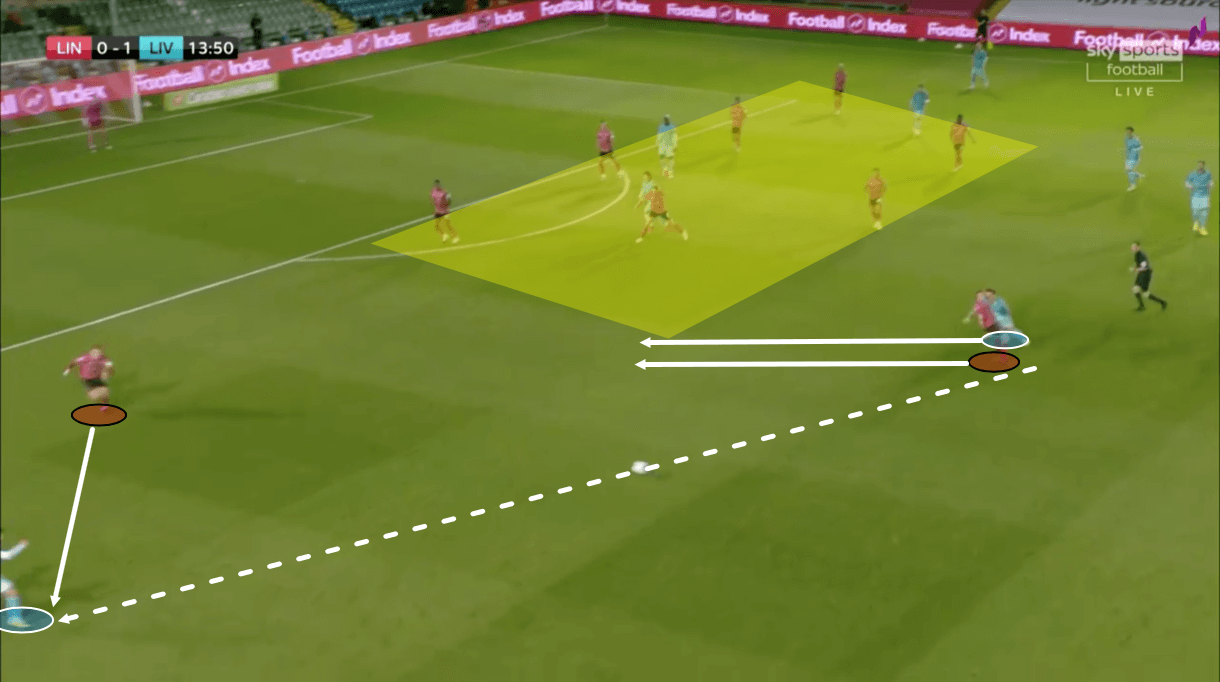 Eventually, Liverpool were able to find spaces within the defensive block. In the next image, Minamino pushed forward centrally, which allows Jones to stay wide and occupy space close to Elliott. This sudden opening forces Melbourne to react frantically. The full-back fouls Jones, which resulted in Liverpool’s opening goal on a well-taken free-kick by Shaqiri. 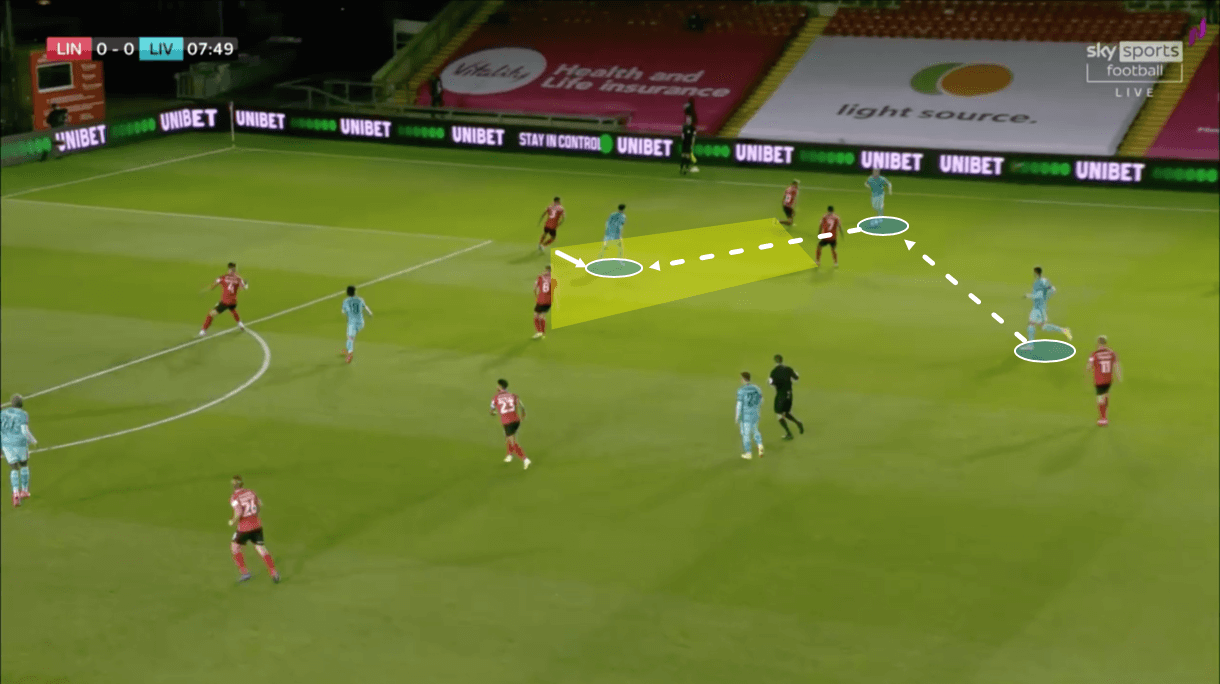 The movement of a number of Liverpool attackers was stellar. Not only was space exploited horizontally on the pitch, but vertically as well. The scenario below is another such method Liverpool utilised to break open and find space within the defensive block. With no pressure applied on him, Rhys Williams has the time and space to hit an accurate long ball forward to Origi. The Belgian shifts down into the box to receive the pass and the two defenders beside him follow suit. Jones accesses the newly-opened space between the backline and midfield line of the block. Origi knocks the pass down to the English attacker, who then hits a curling effort into the top right corner of the net for Liverpool’s third goal. 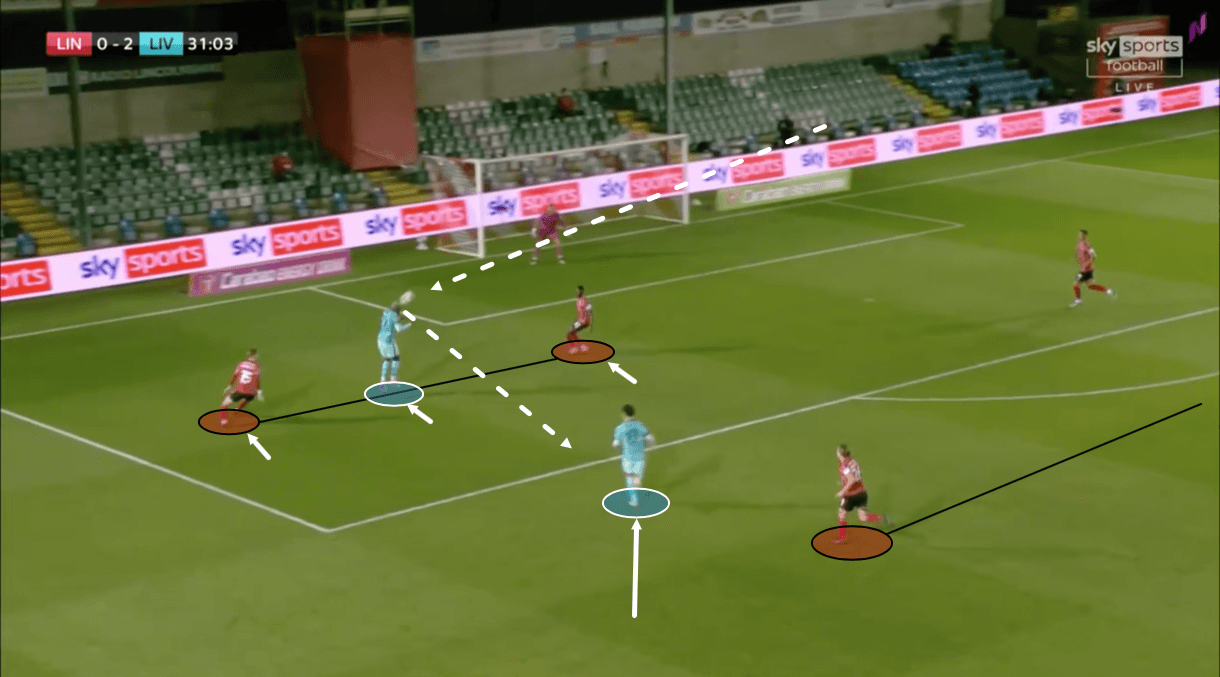 When Lincoln City gained possession of the ball, Liverpool applied familiar counter-pressing or pressing tactics. In the match PPDA chart, the Premier League side displays both quality and consistency in their defensive success. 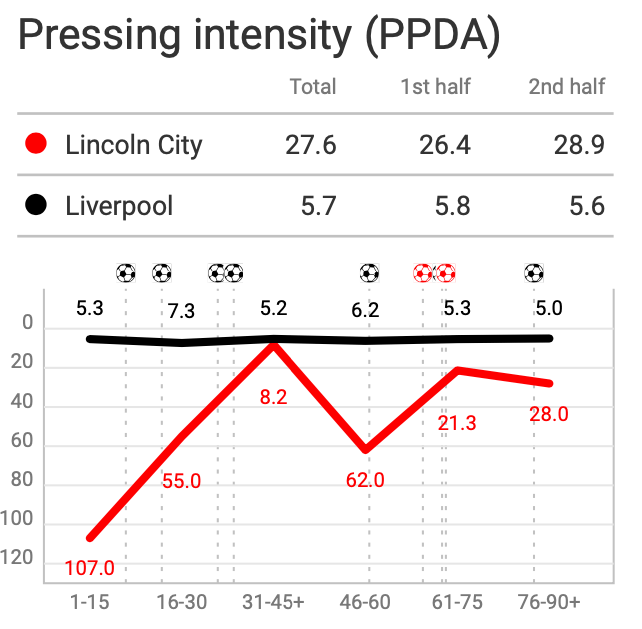 This press efficiency results in further possession in the advanced areas. Liverpool also exploited this using quick, smooth transitions from defence to attack. The action seen below is a prime example. Lincoln City attempt to build out from the back, but Montsma’s pass to Melbourne is intercepted by the Elliott, who has positioned himself to block off the passing lane on the press. Immediately upon seeing this interception, and with the two ball-near Lincoln City players switching to mark the two nearest Liverpool attackers, Minamino moves forward into open space between the lines. He receives the pass and scores what would be the first goal of his brace on the night. 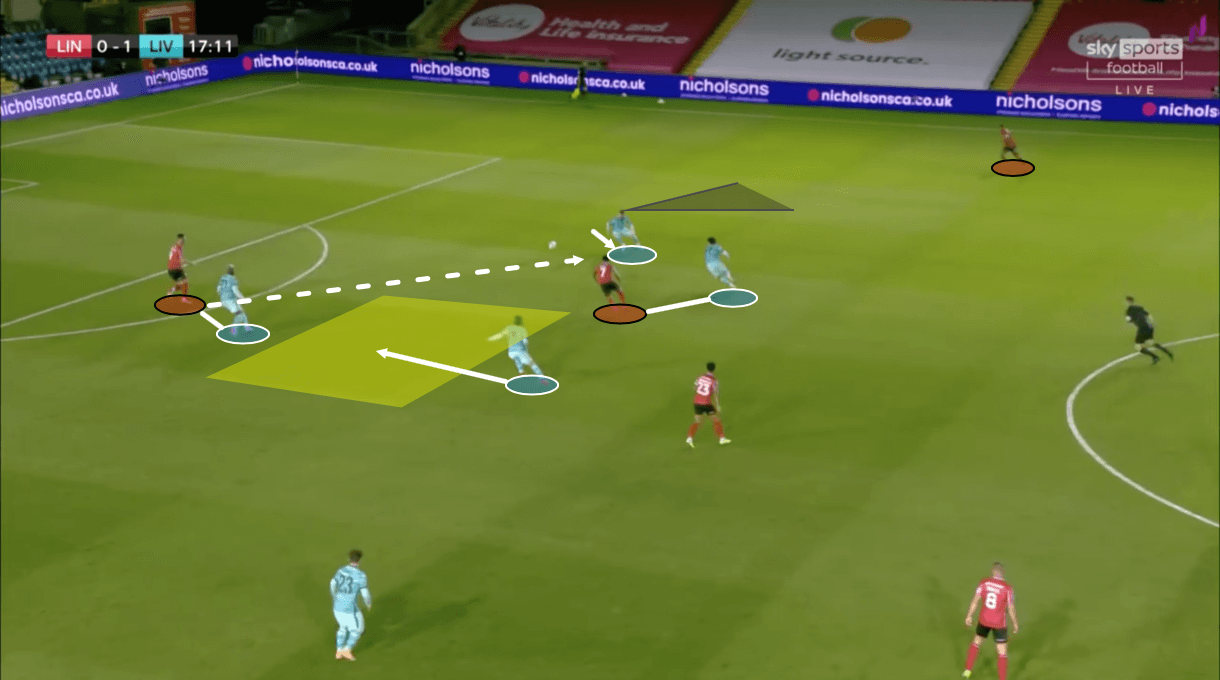 This intelligent positioning as soon as the ball is won off the press aided Liverpool on a number of their goals on the night.

Another defensive tactic often used by high-pressing sides is the offside trap, and that is no different under manager Jürgen Klopp. Liverpool succeeded in catching Lincoln City offside five times throughout the match, often intentionally. In one such instance below, the two Liverpool centre-backs held their line. Specifically, Rhys Williams did well to refrain from dropping back in an attempt to intercept the through ball. Tsimikas dropped forward as well to complete the successful offside trap. 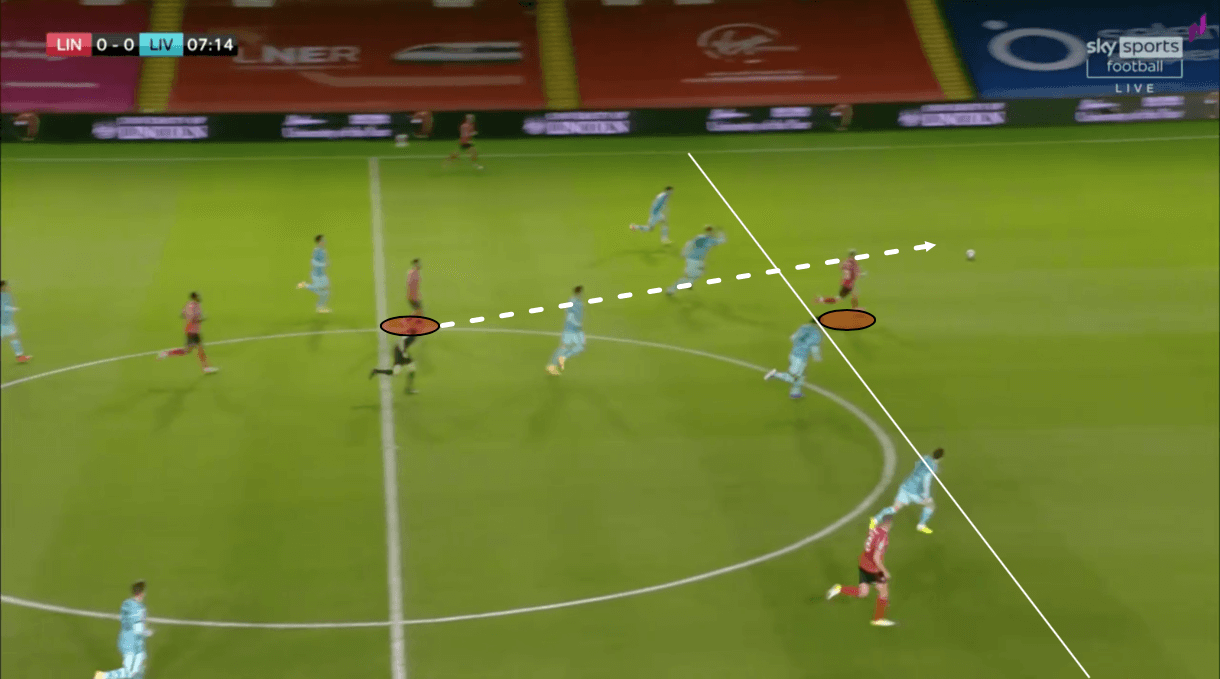 In the second half, Lincoln City pushed their positioning higher up the pitch and involved pressing tactics. This risk proved beneficial in some instances, as Lincoln City were able to win the ball in the higher areas. In the instance below, Scully and Lincoln City substitute Conor McGrandles press the ball in the wide area, with Scully also using a cover shadow to block a passing lane. They take the ball away and immediately begin a counter-attack down the left side, which results in Lincoln City’s first goal of the match. 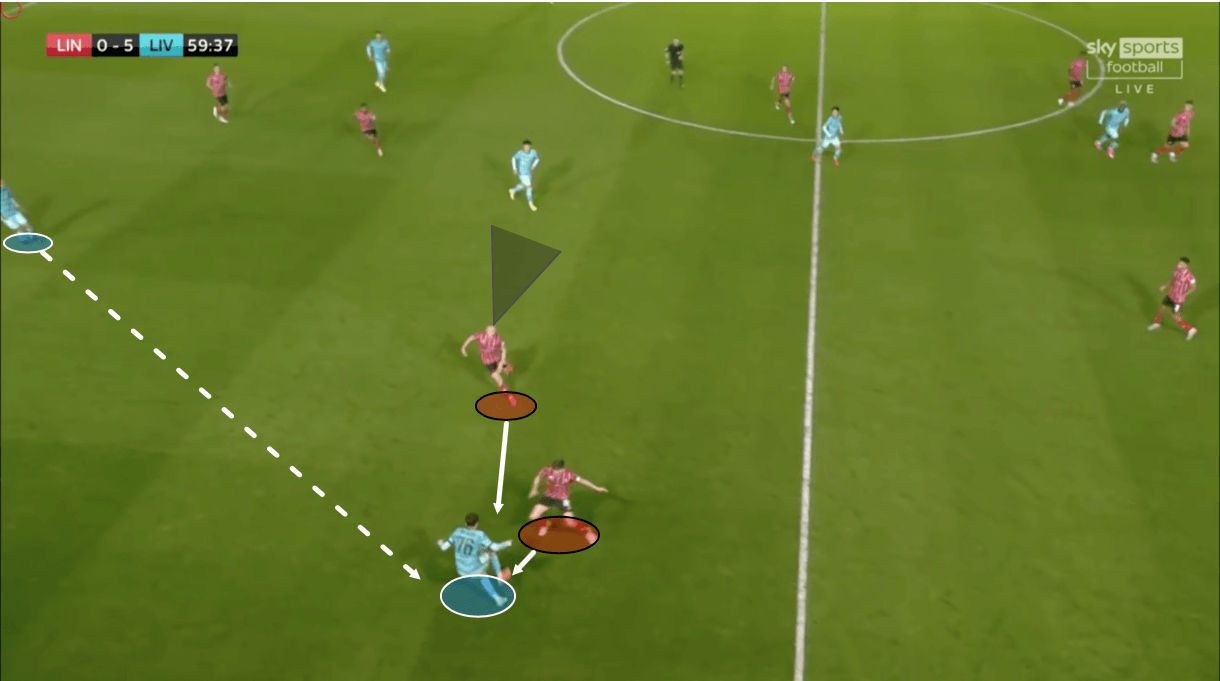 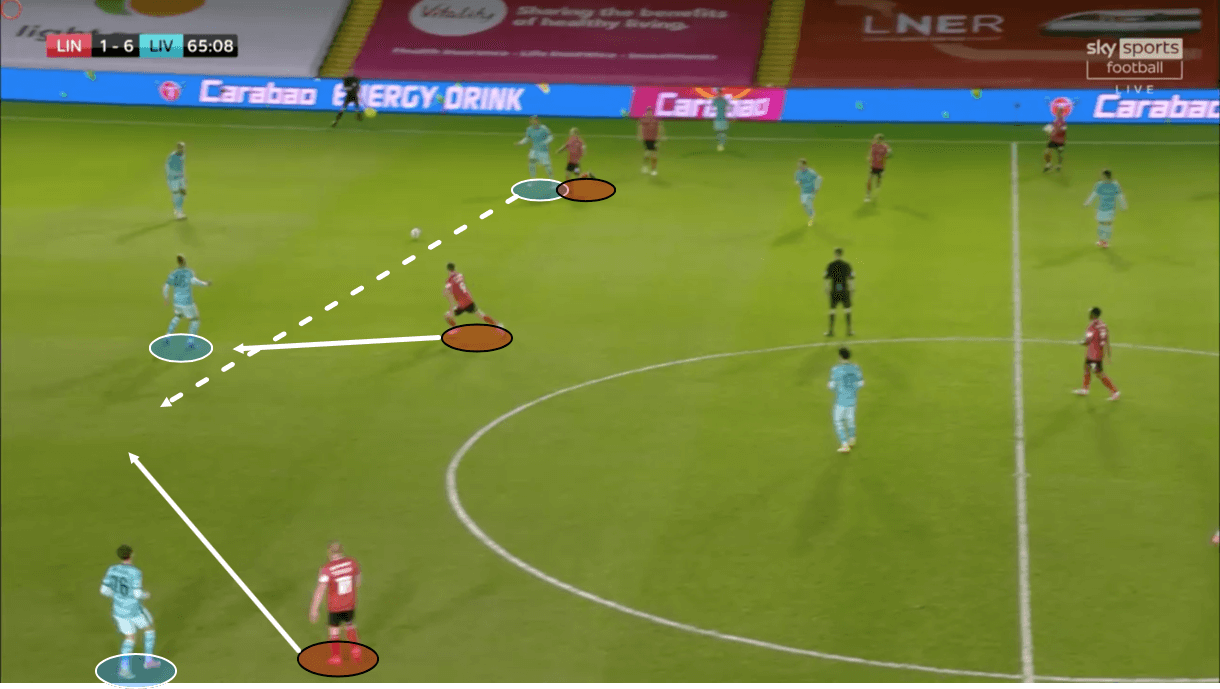 Lastly, below are maps of their recoveries in the first half compared to the second half, proving the overall increase in defensive success in the attacking half and final third.

Additionally, this higher possession led to a similar increase in shots. The Imps not only attempted nine shots in the second half (compared to just four in the first half) but also saw a rise in expected goal value, from 0.53 to 1.45, for a total xG of 1.98.

Despite Lincoln City’s efforts in the second half, the forceful, continuous attacking and pressing, along with individual talent, led Liverpool to a strong victory. Liverpool have often been criticised the past couple seasons for trivialising domestic cup competitions. Ultimately, the debate regarding the value of domestic cups is relatively inconsequential. If a club values it, then they’ll compete for it aggressively; if they don’t value it, they’ll see little reason to prioritise it. Regardless, Liverpool’s victory in this match continued the provision that their youth and depth recruitment have been successful if not stellar over the past few seasons. Both sides will look to continue their unbeaten league runs this weekend.