The 42nd matchday of the 2021-22 EFL Championship saw promotion contenders Bournemouth host playoffs contenders Middlesbrough on Good Friday. Both of them came into the clash after a disappointing result in their previous outing where Middlesbrough lost 1-0 against Hull City and Bournemouth got a draw against Sheffield United.

The teams came into the game in search of three points given both of them have a set target before the regular season ends where Bournemouth are eyeing a direct promotion to the top flight while Middlesbrough wants to clinch one of the four playoff spots.

But both of them decided to not lose and settled for a draw with each of them taking a point home after the match.

This article features the tactical analysis of the game and discusses the tactics used by both teams and how they neutralised each other. Let’s begin the analysis.

Scott Parker made two changes to the lineup that played against Sheffield United with Ethan Laird and Todd Cantwell replacing Jordan Zemura and Siriki Dembele as Parker looked to retain most of his general playing 11 without making much bigger changes given the things to play for with just 4-5 games left. 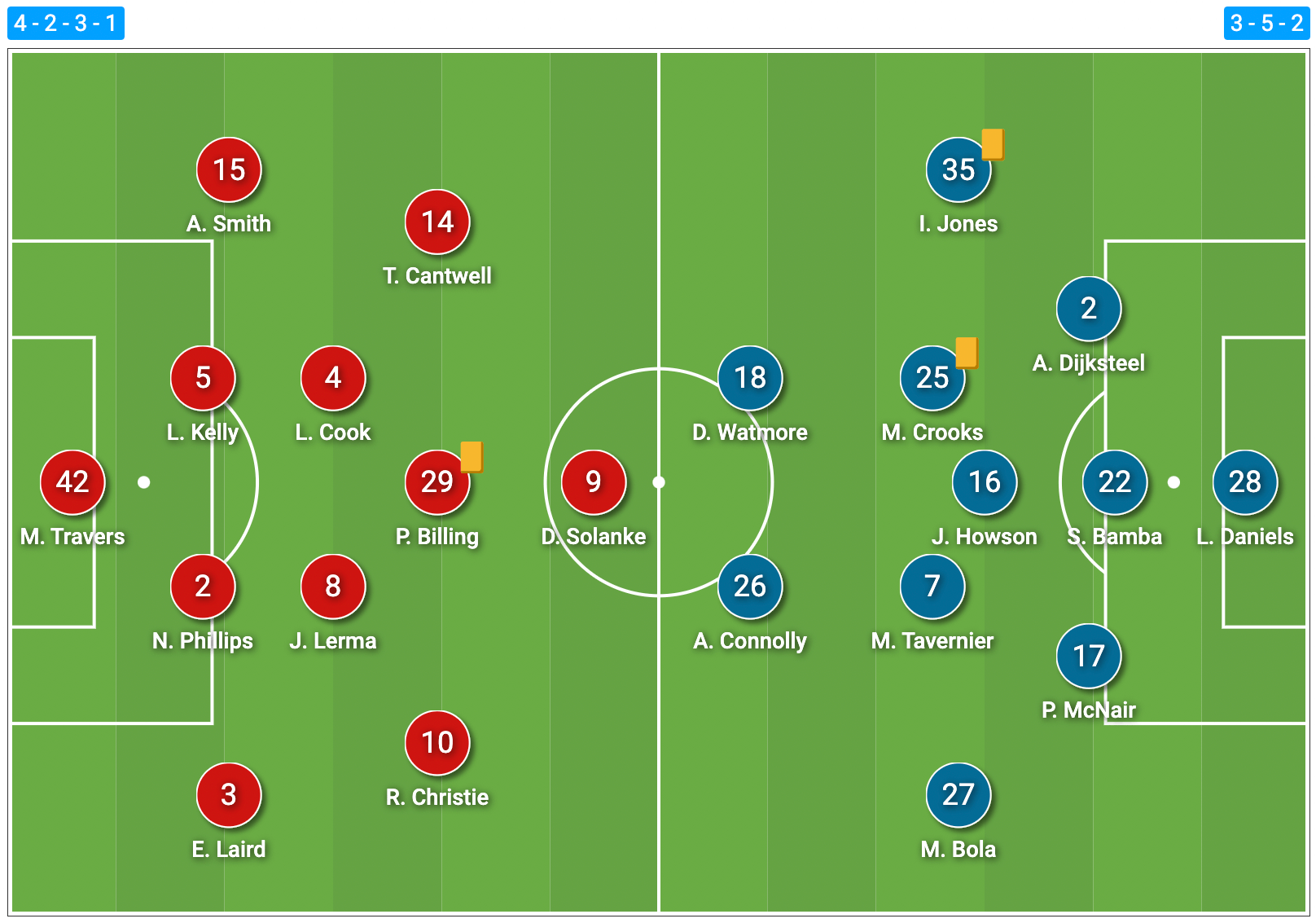 Middlesbrough, on the other hand, made three changes to the lineup that lost 1-0 against Hull City with Sol Bamba, Isaiah Jones and Duncan Watmore coming into the lineup in place of Dael Fry, Riley McGree and Folarin Balogun as Wilder also decided to keep the majority of his lineup.

It was clear from the start that both teams had a thing to play for going into this clash and both of are going to approach the game with patience and clarity without too many complications. Middlesbrough and Chris Wilder decided to do the exact same thing where they prioritised their defensive shape and structure to ensure that Bournemouth did very little without possession. 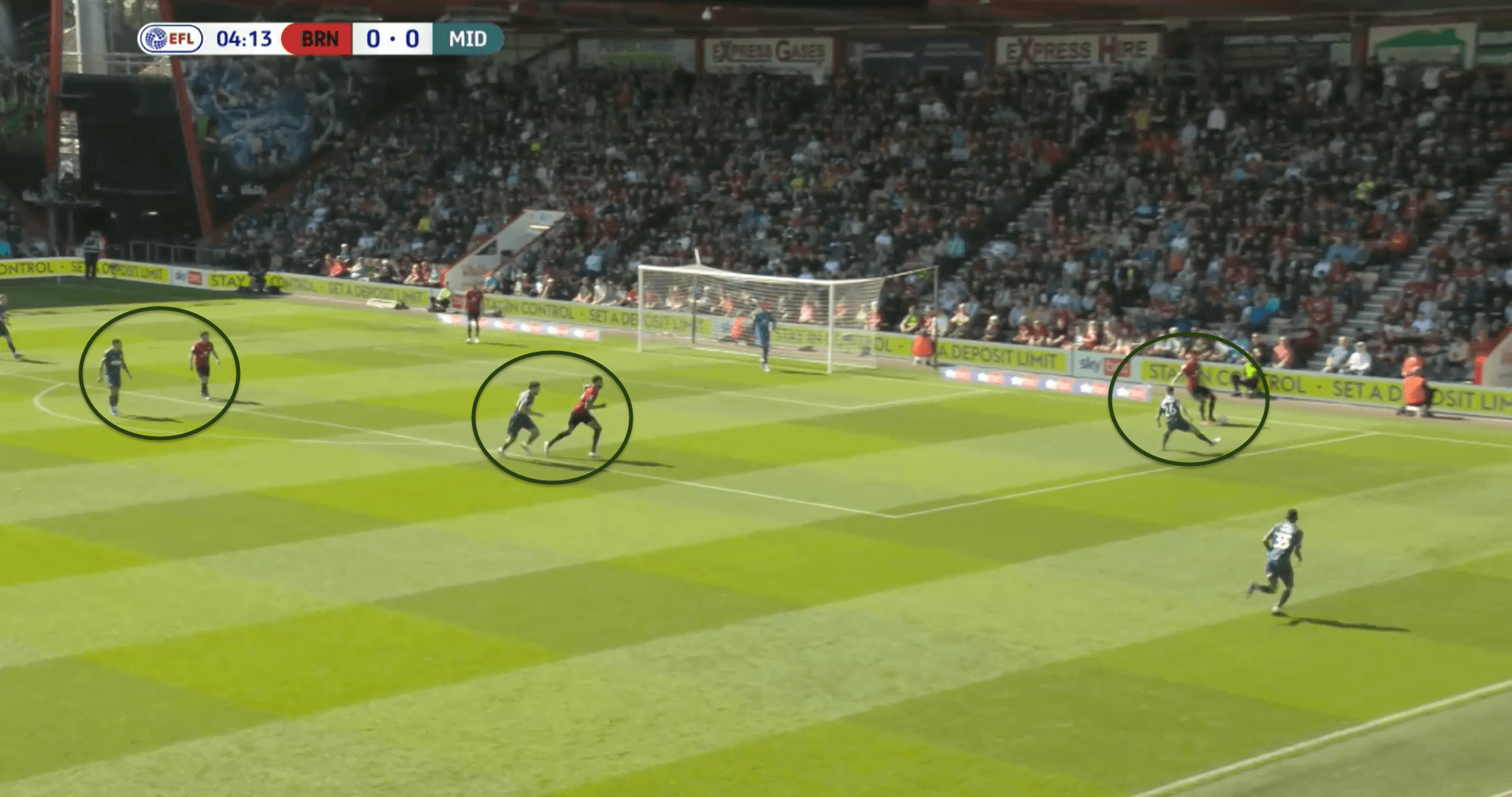 When Bournemouth decided to play out from the back, Middlesbrough decided to press high in a man-man fashion with the wing-back pressing the full-back even if he was positioned very high up the pitch. The impressive thing about that was the players’ body orientation during the press. The lanes were cut out pretty well and were covered by the Middlesbrough players, making it really difficult for the Bournemouth players. We can see that in the above image where they are intensely pressing Bournemouth players and the player having the ball cannot play it down the channel due to the opposite Bournemouth players’ body orientation so his only option is to play it to the full-back who is also being pressed by the wing-back. 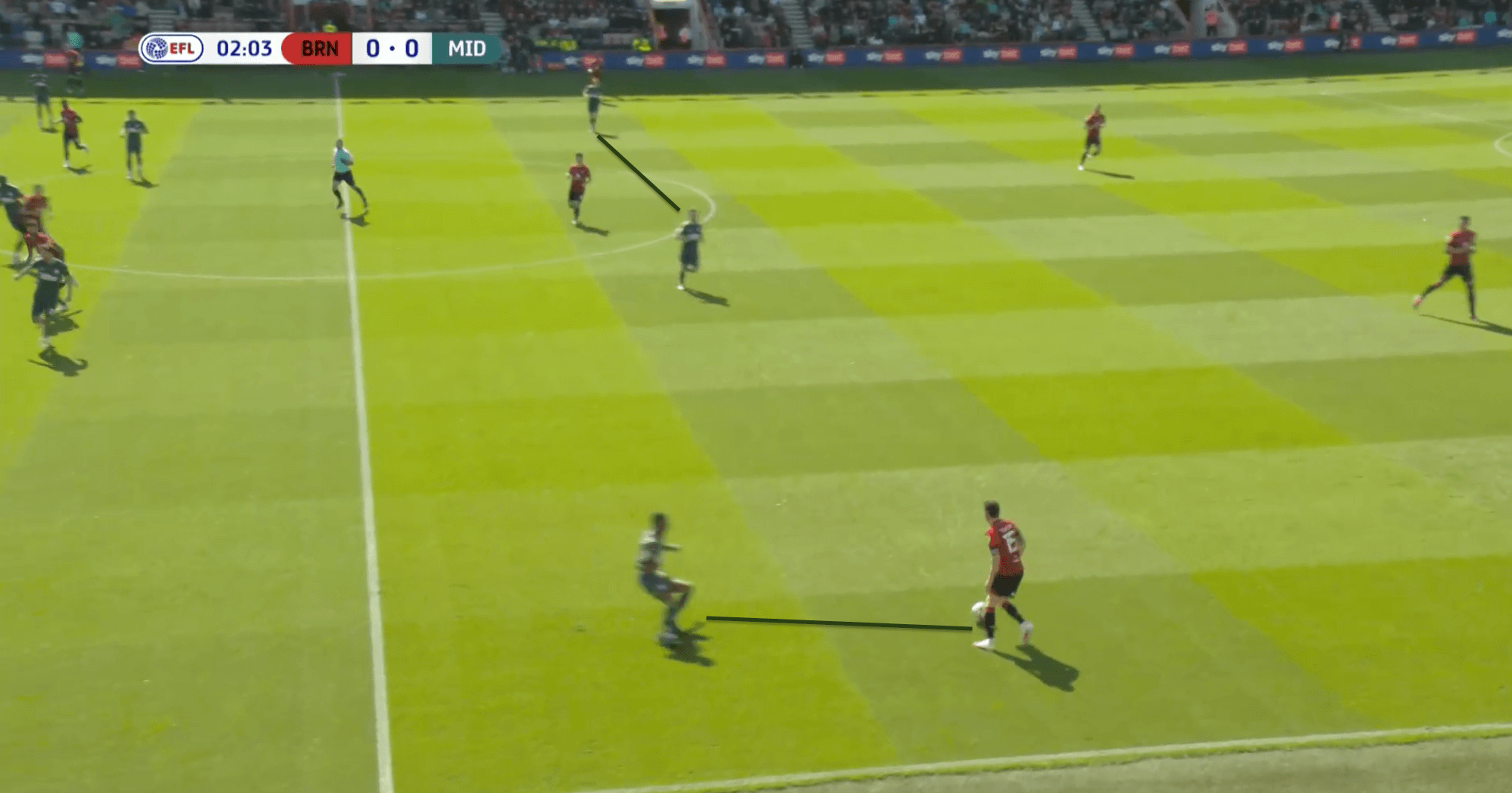 Another key thing was the mid-block that was employed by the Middlesbrough players. The front two stayed pretty close to the Bournemouth’s number six while the other players were protecting the spaces around the middle of the park. The wing-back and the central midfielder took turns to press the opposition’s full-back like in the above image while the CBs defended with a slightly high line.

Bournemouth tried to use this high line to their favour by constantly asking their forwards, Solanke and co, to make runs in behind. This is something that many top teams like Manchester United, Liverpool, etc in the past have used against Chris Wilder’s Sheffield United where the mid-block high line would be exposed against pacy forwards who would look to make runs in behind with the long balls coming from their CBs. We can see that in the image below where Bournemouth constantly look to do this but sometimes fail because of the timing of the runs or the defence being better aware of the high line and maintaining that well. 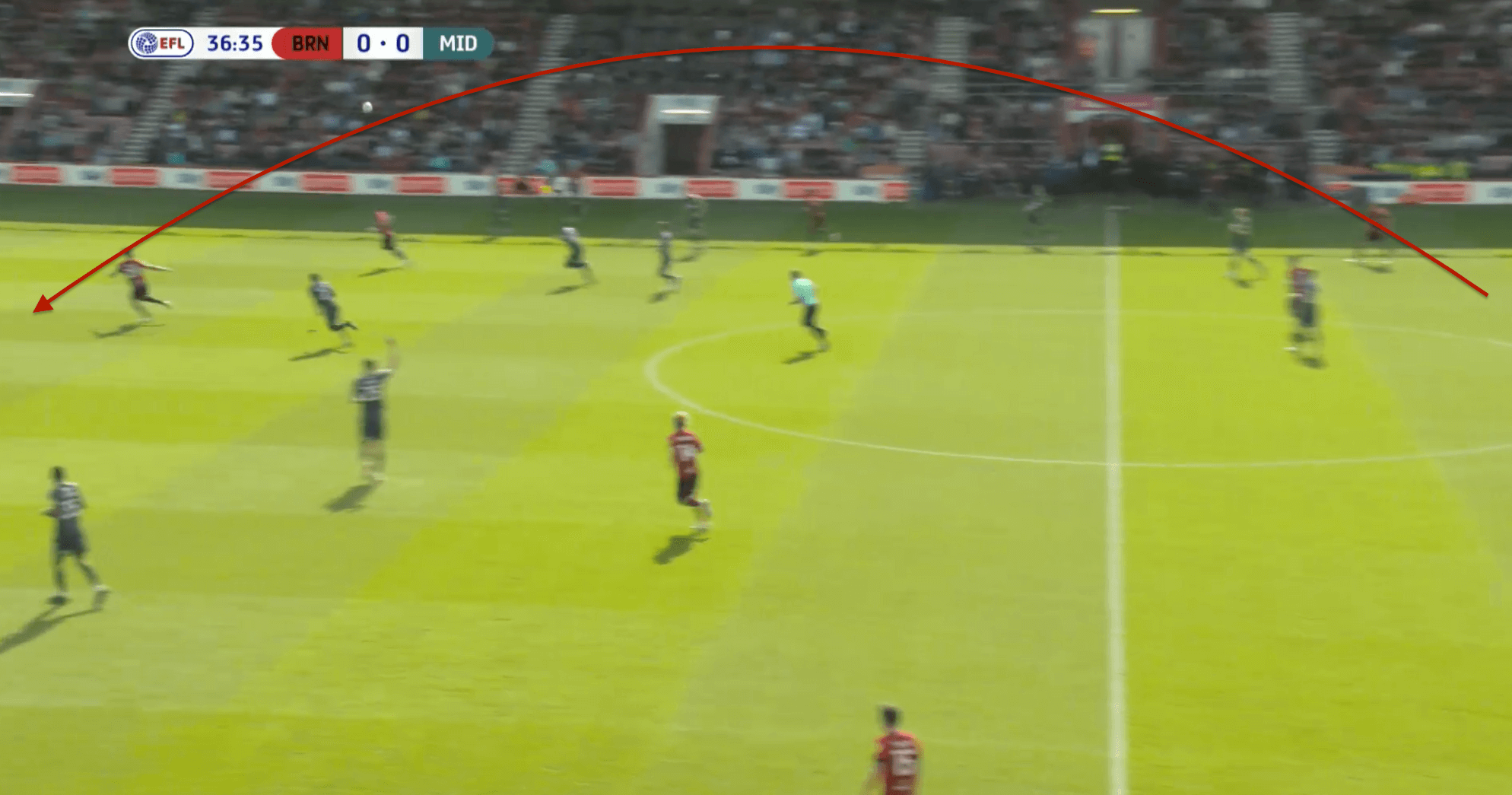 But there were situations where Bournemouth were able to find gaps or ways to break this Middlesbrough defence when they lost the ball or had a very poor counter-pressing shape. This meant that Bournemouth were able to play through when they positioned their forwards in the right spaces. We can see an example of that in the image below where Bournemouth have players for counter-attack immediately after Middlesbrough lose the ball. 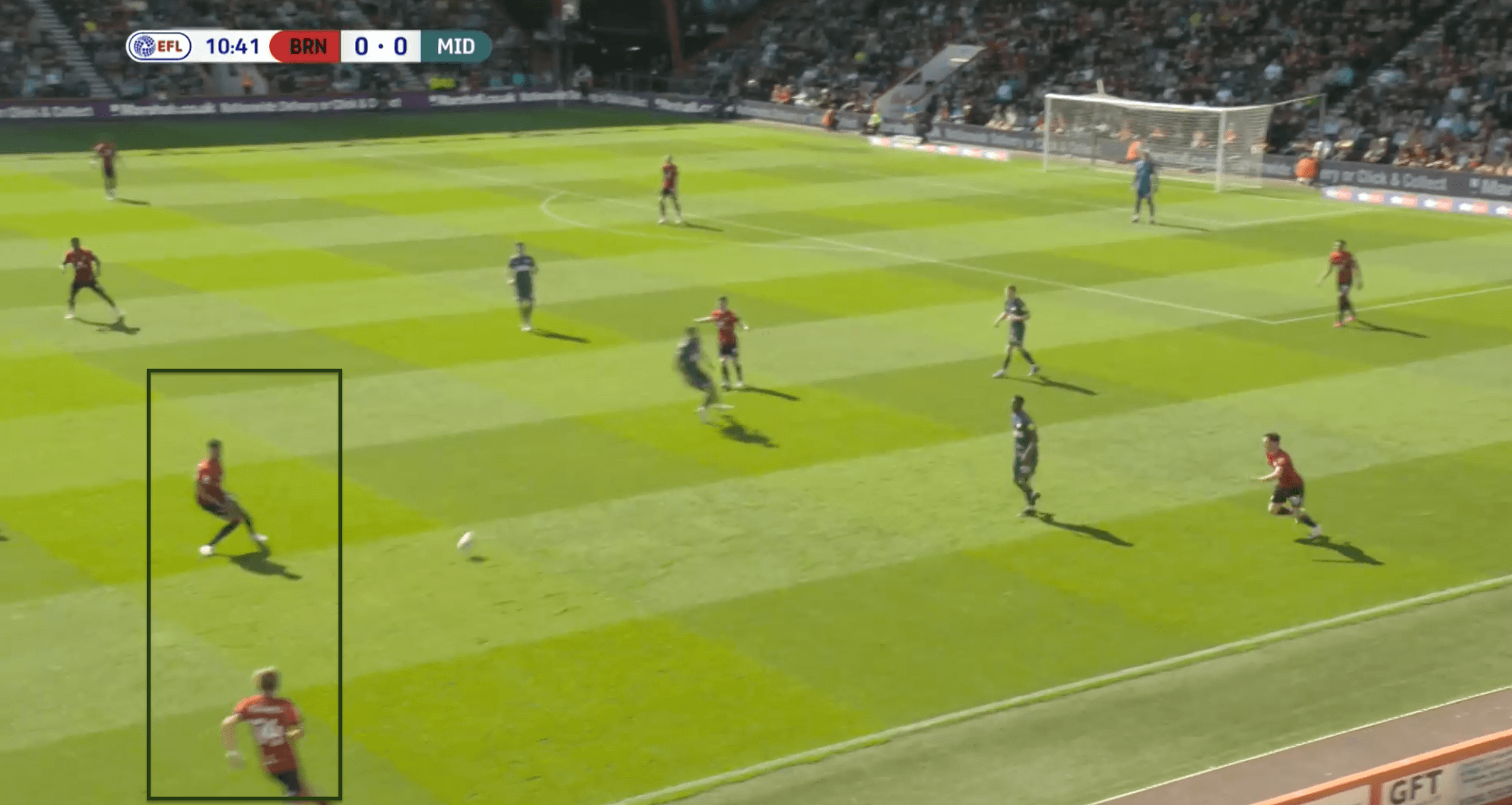 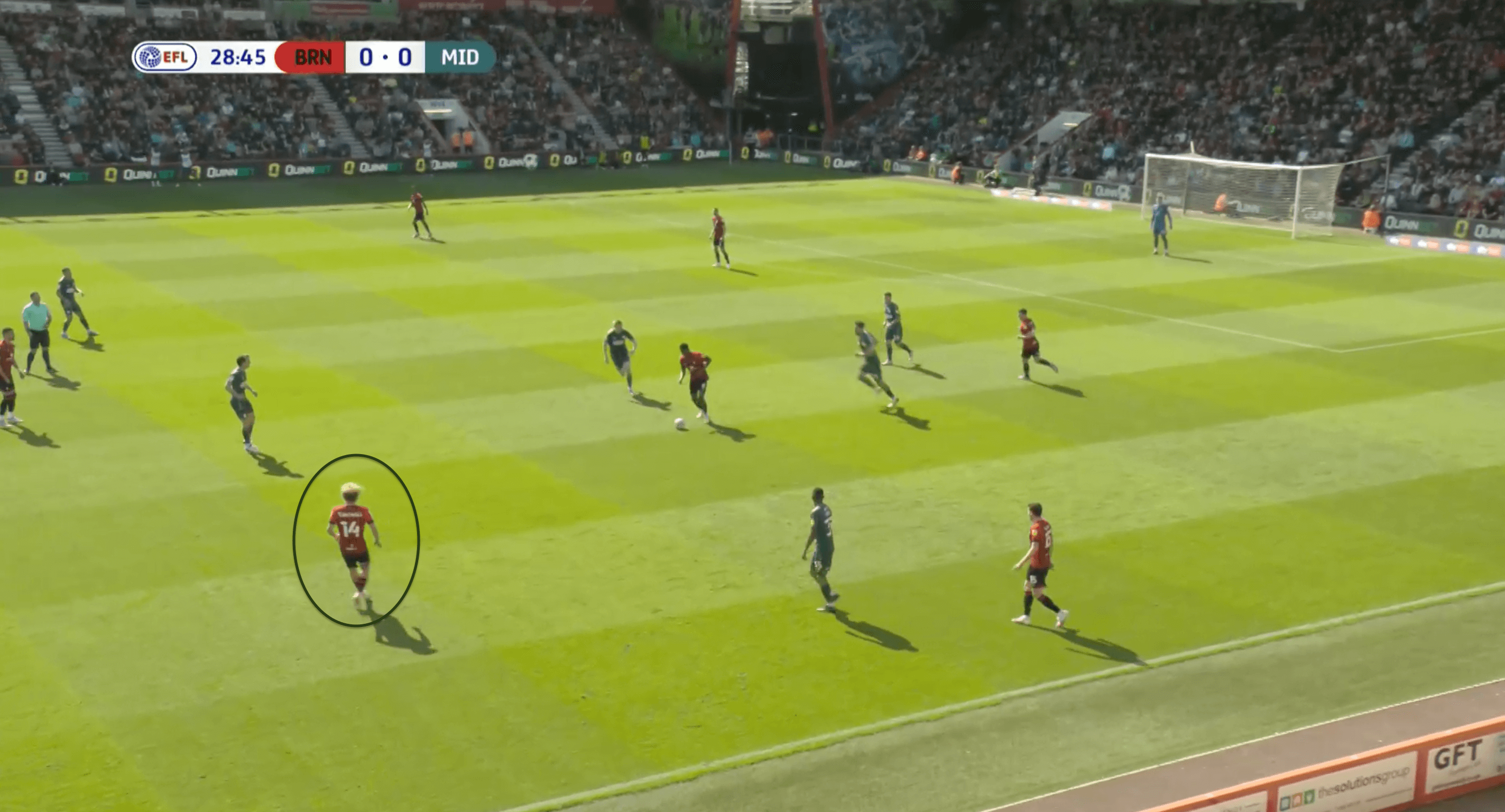 Despite being among the most consistent sides and among the probable contenders to get automatic promotion to the Premier League, Bournemouth looked far off that side and had some issues in the game, especially with their structures that saw them struggle both in and out of possession, especially in a low block.

Middlesbrough had many instances where they were able to play through the Bournemouth’s defence when they were in their low block. The defensive midfielders were very passive by failing to track the runs of their opponents and letting them through. 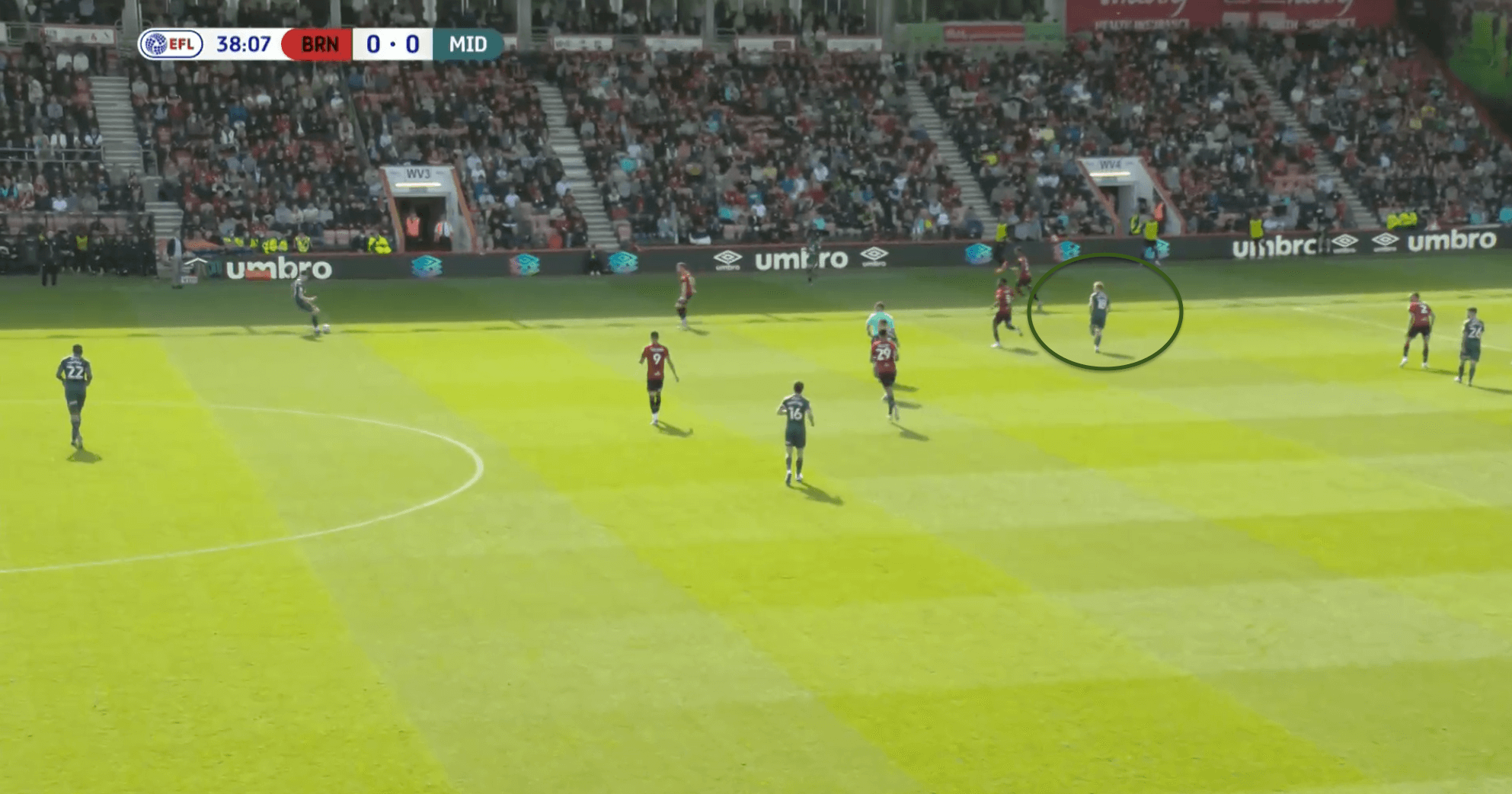 We can see how Middlesbrough look to exploit the space behind the Bournemouth defence especially the gaps between the centre-back and the full-back in the image above where the CM makes a run in behind to exploit that space. He was also found with a good ball by the CB from the deep.

Bournemouth were getting constantly exposed to this type of situation where they were able to find men in between the full-back and the centre-back constantly. Also in the image below we can see how the midfielders of Bournemouth are badly positioned which leads to Middlesbrough’s midfielder getting the required time and space to play the ball in behind the defence. 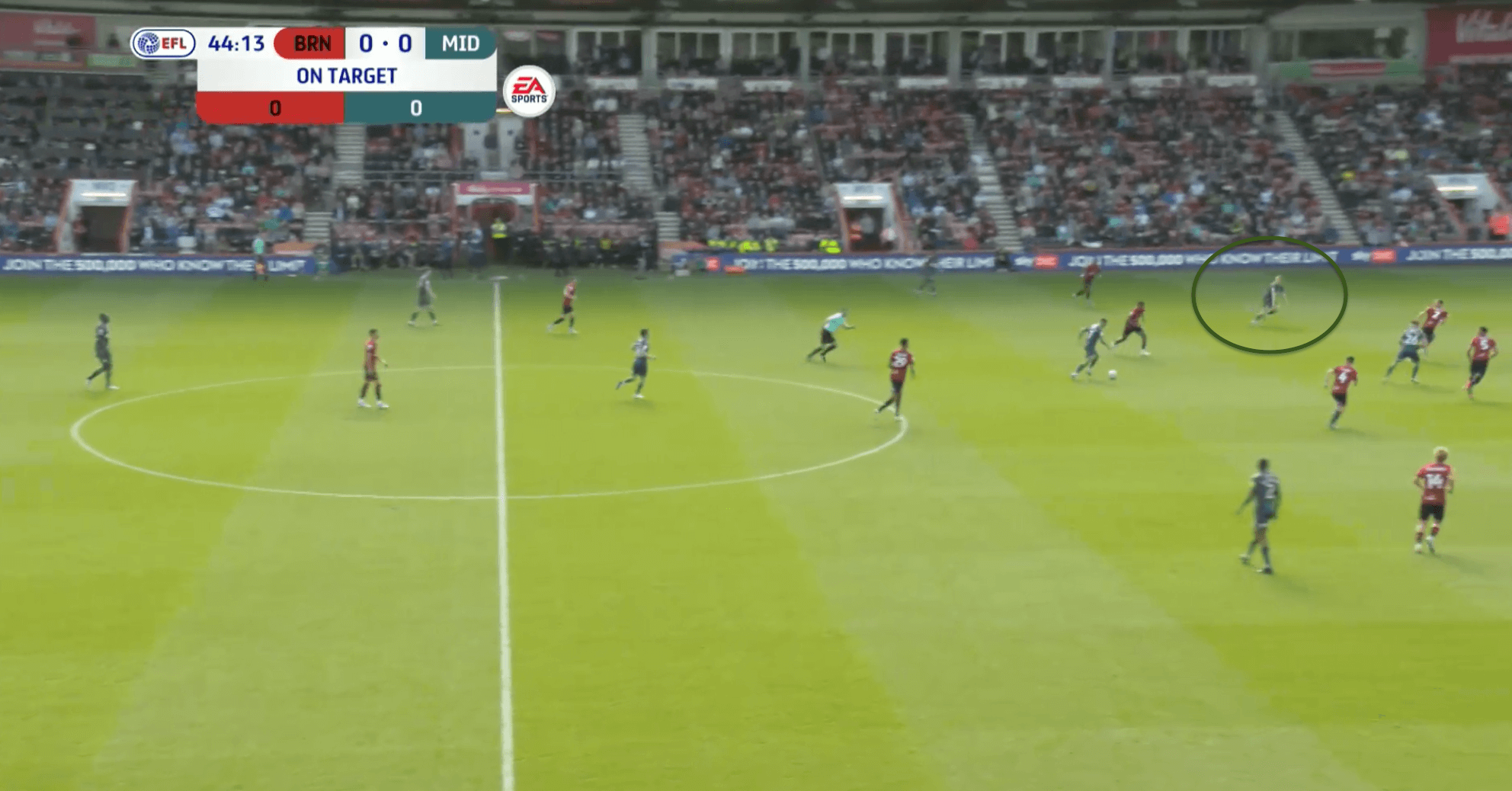 These types of runs were constant from the Middlesbrough central midfielders where they looked to make good use of the lateral stretching that their team did to create gaps in the Bournemouth’s backline as they weren’t able to cover the lateral field with their four defenders. 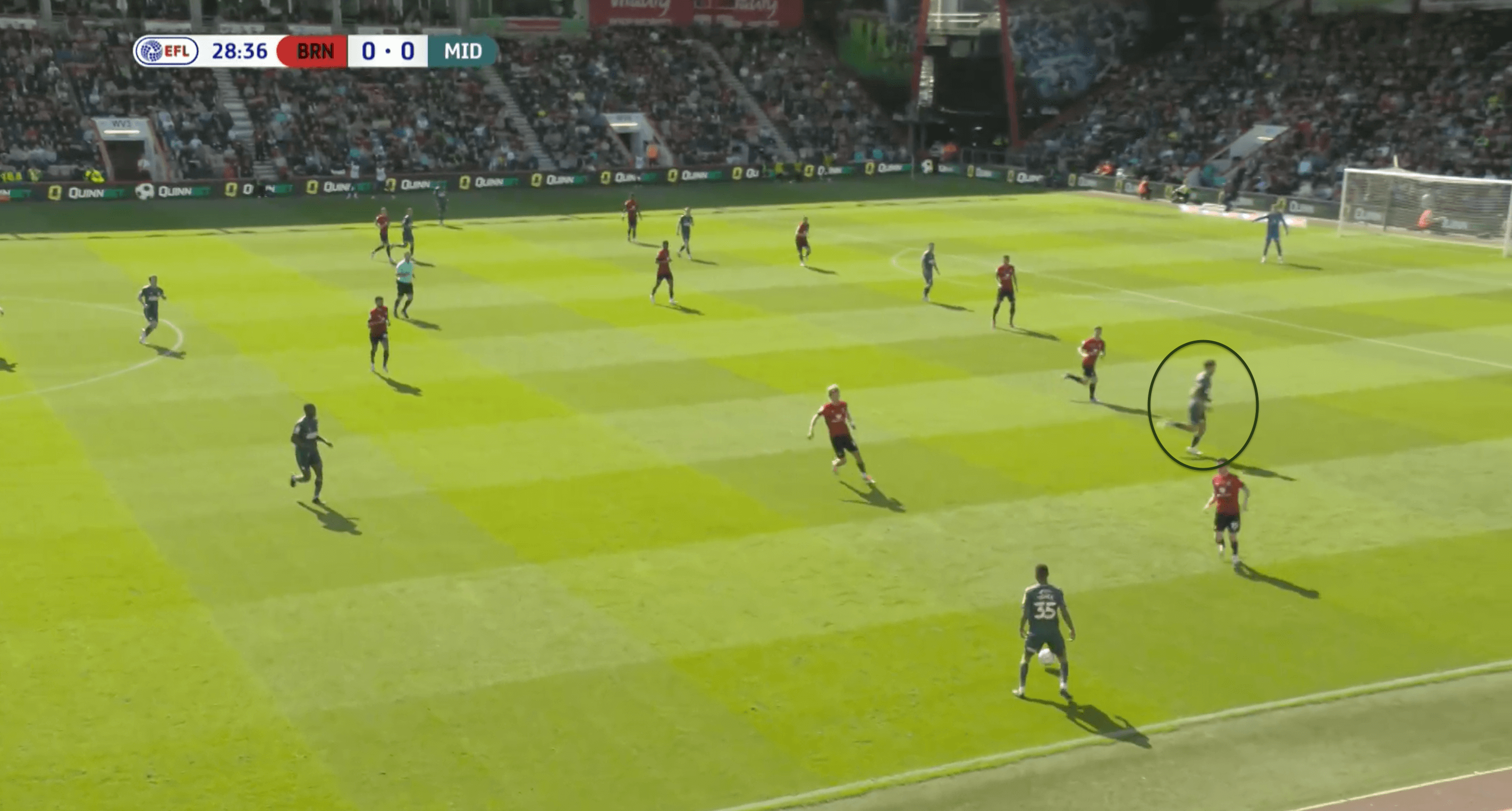 This almost left their backline constantly getting exposed to the opponents and lead to Middlesbrough being able to play an out through. Also, the wingers on either side could have been more disciplined as they constantly lacked the right amount of strictness with their position again saw the full-backs being found to deal with the wing-backs always this meant that by the time the full-back went forward and pressed the wing-back the ball would have already been played up the field to the player making a run in behind the defence. Middlesbrough could have used these opportunities well as they lacked the execution with their final ball on many occasions.

But again this was the issue with them when they were in a mid-block but when they played a high press, Bournemouth were really good in putting pressure and not allowing the Boro players to progress the ball. We can see that in the image below where they have put heavy pressure on the Boro CBs with their pressing that has them pinned back. 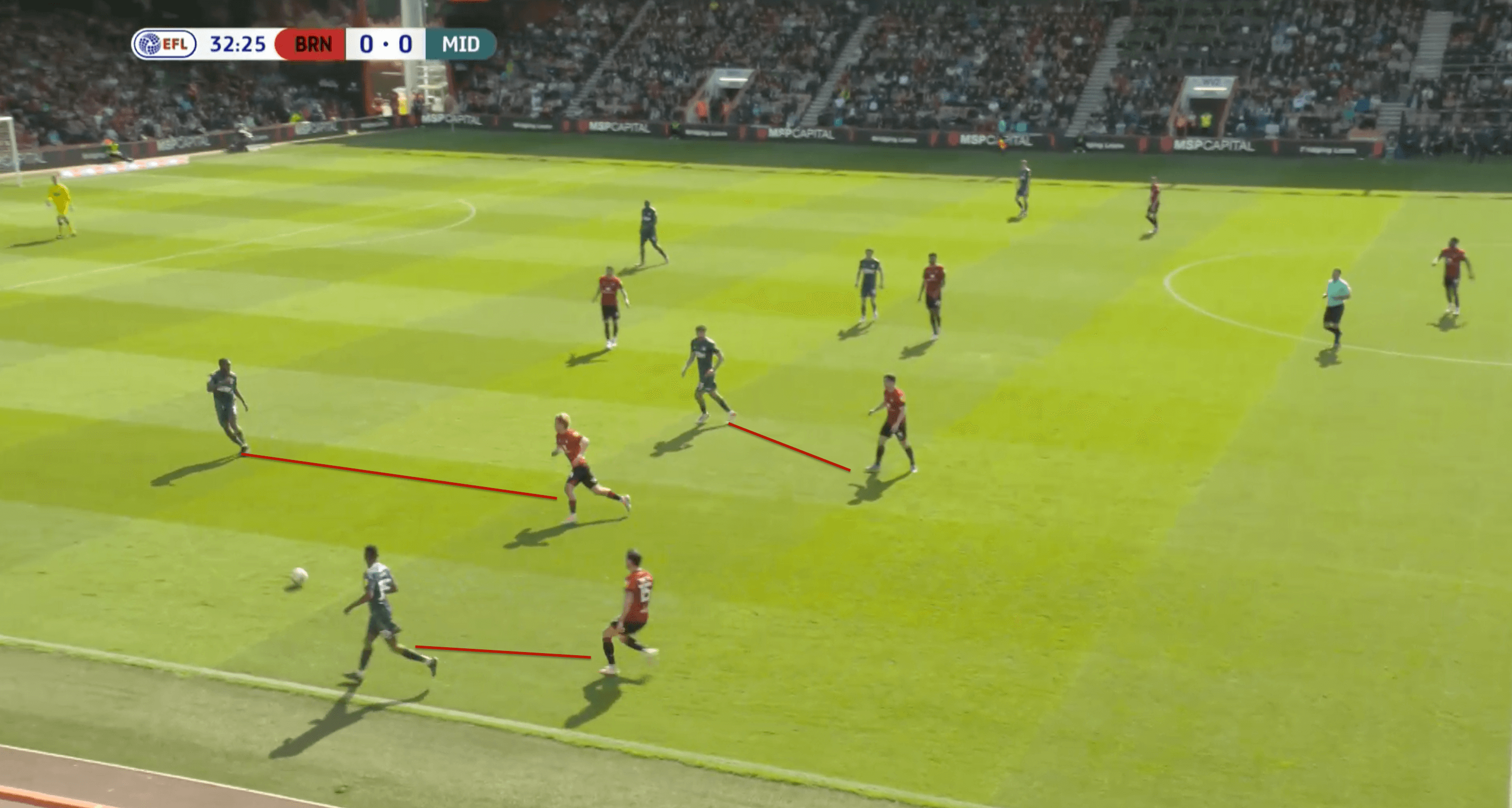 This man-man press by Bournemouth was successful in most instances where Middlesbrough’s only chance was to punt the ball away to clear it or aimlessly play a long ball forward. All the options around the ball and also the space around them were covered precisely by the Bournemouth players. 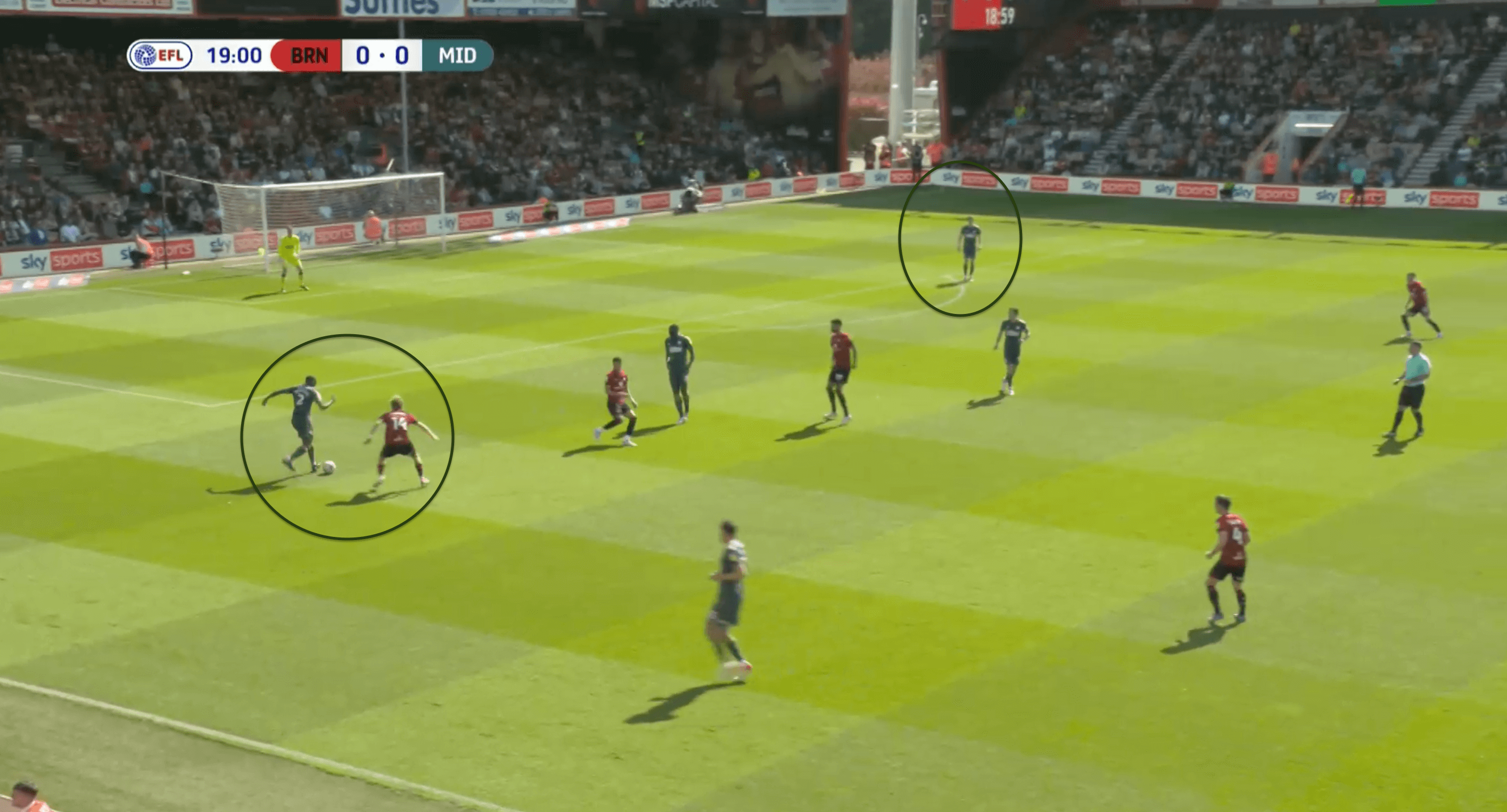 They also deployed specific pressing traps where they would have their players close to those Middlesbrough players that were around the ball while keeping a certain amount of distance from the others who are far away from it but in touching distance when the ball is being played to them. This was specifically done to trick the ball holding player to play to him and the nearest Bournemouth player would press him and look to win the ball back.

After the 60th minute mark, both the teams were pretty much content with a draw and were more focused on not wanting to lose the game. This was pretty much seen in statistics as well where the possession was 51-49 for Bournemouth and Middlesbrough respectively and both had just 2 shots on target. As things stand, Bournemouth are still favourites to follow Fulham after Nottingham Forrest’s loss to Luton Town into getting a direct promotion to the Premier League while Middlesbrough still have a shot of reaching the playoffs despite the draw.