Following Brentford’s successful comeback the previous night against Swansea City, this game between Fulham and Cardiff City was to see who could earn the right to face the Bees at Wembley for a place in the Premier League.

Fulham entered the match in an excellent position. Scott Parker’s side came into the game with a 2:0 lead after the first leg in Wales. Fulham also won this respective match in the league just a few weeks back by the same scoreline. There have been, however, questions around them all season and whether they’re fulfilling their potential, especially considering their quality and financial power relative to the rest of the EFL Championship. Cardiff, whilst losing in the first leg, have been one of the in-form teams since the restart, picking up 19 points under Neil Harris.

In this tactical analysis, I will conduct an analysis to look at the tactics of Fulham and Cardiff in this EFL Championship play-off game. 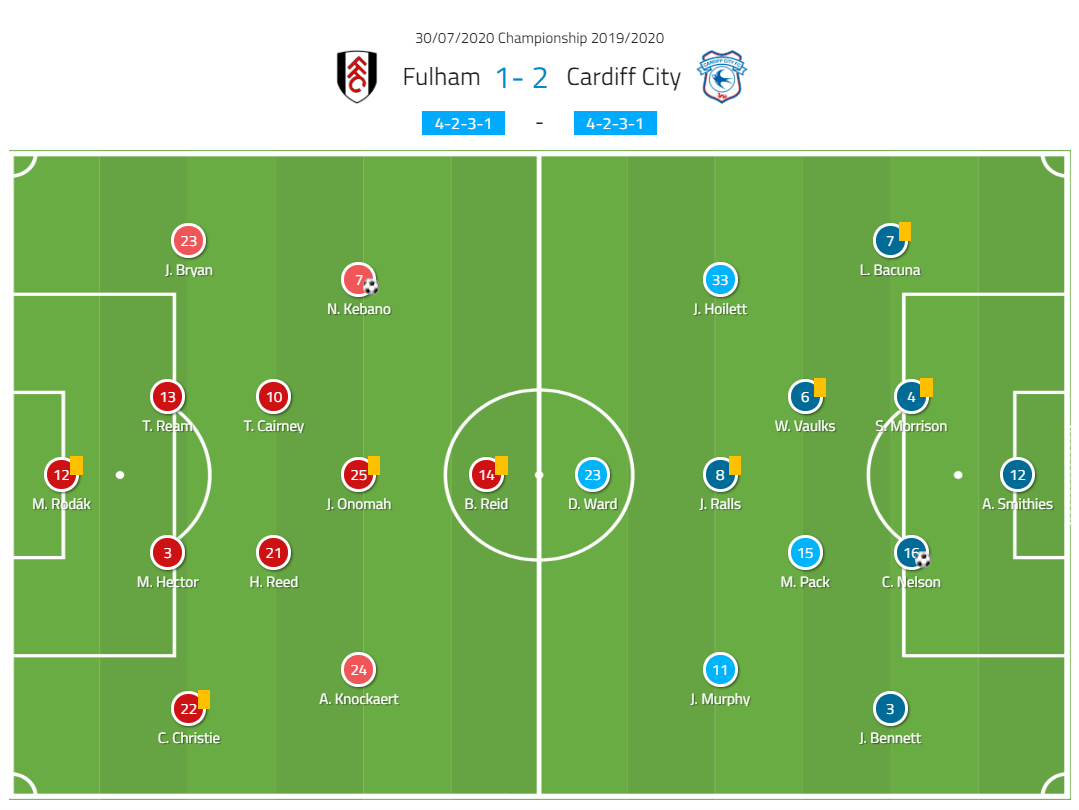 On Monday night the headline news was the complete absence of Aleksander Mitrović for Fulham. Nevertheless, their performance dictated that the Serbian forward was again left out of the squad – perhaps with one ambitious eye on the play-off final Tuesday evening. Bobby Reid, therefore, was chosen to lead the line.

In his first full season as a head coach, Parker has been associated with retaining possession and playing out from the back in a 4-3-3 formation. Indeed, this continued here with Fulham registering 60% possession.

Fulham maintained the build-up structure they have used often, with Harrison Reed being the lone pivot. The Southampton loanee could have two roles. One was to offer a passing option for the players on the first line, either from wide or from the centre-backs to bypass Cardiff’s forwards. He did not, however, become part of that first line, exclusively remaining higher, on a different staggered line. Alternatively, his positioning could help dictate where Cardiff’s 10 would be, thus potentially opening passing lanes into more offensive teammates. This highlights the importance of being positionally aware. 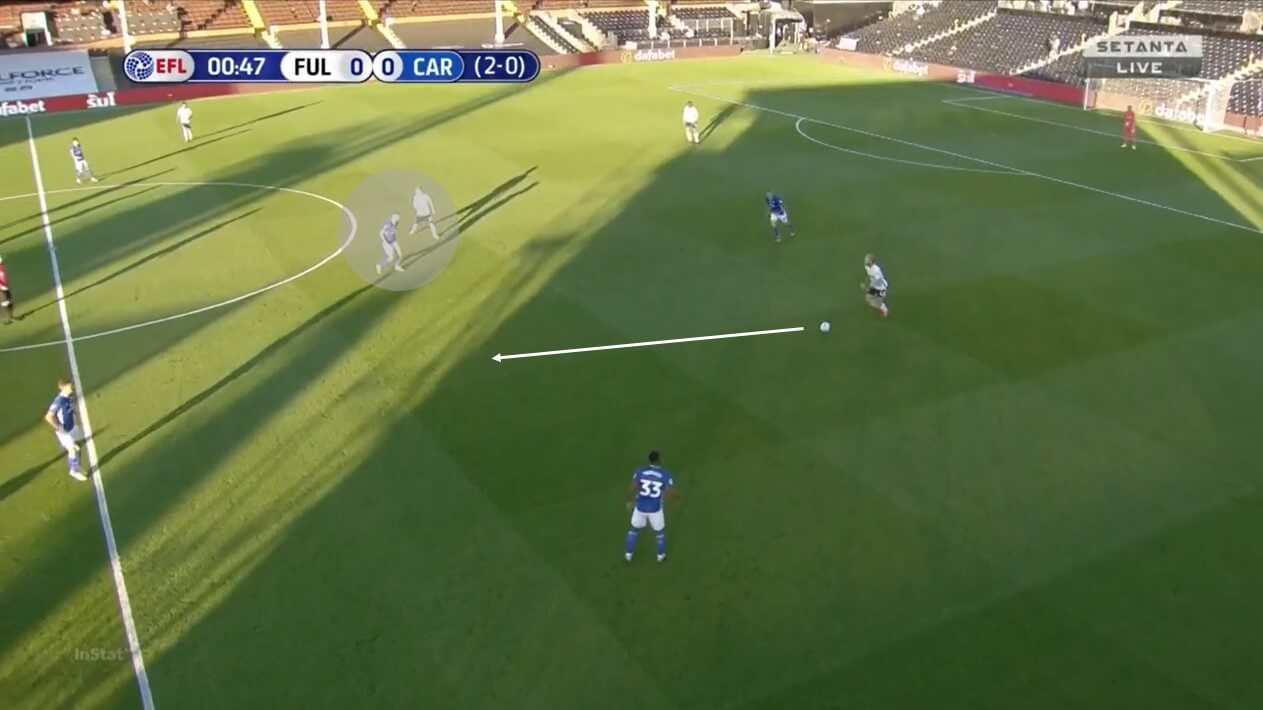 Here above we can see what seems to be a fairly innocuous situation. However, Reed’s positioning is preventing Ralls from engaging Tim Ream in possession, who can vertically advance in the half-space. At the same time, this example shows the benefits of optimal spacing, with Reed occupying a different horizontal line, and Cairney having pushed up off-screen in the same line as Ream, allowing the space to advance.

Joshua Onomah and Tom Cairney had differing roles, though they could directly rotate and occupy varying space. Cairney had greater inclination to drop deeper, therefore initiating build-up. This additional presence in deeper areas could help ease ball progression. For example, overloading Joe Ralls, the opposition 10. Furthermore, in reaction to this, it often caused one of the Cardiff double pivot to step out and apply immediate pressure. 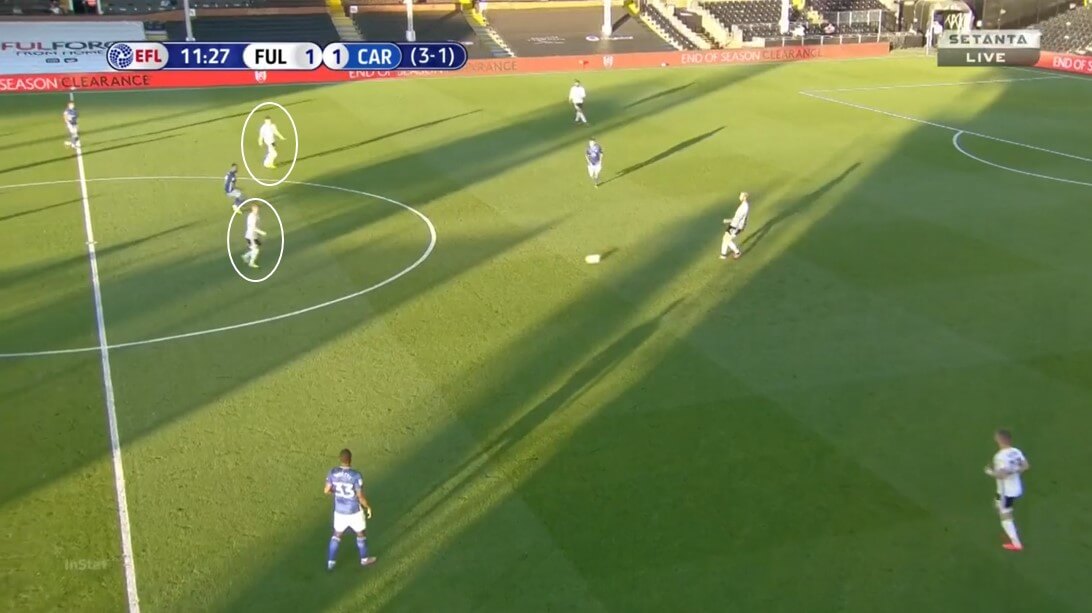 Firstly, here above, we can see Cairney temporarily dropping into the second line alongside Reed, thereby overloading Ralls, and allowing Reed to receive under no pressure. Naturally, this creates a dilemma for the Cardiff midfielders. They can either opt to hold their position in front of the defence, but ease Fulham’s build-up and have no realistic prospect of an advantageous turnover.

The secondary option is to press Cairney to stifle attempts at ball progression, hopefully forcing them long and into a likely turnover or, causing Fulham to lose possession close to their goal due to poor build-up. This specific method, however, requires precise coordination to maintain compactness. 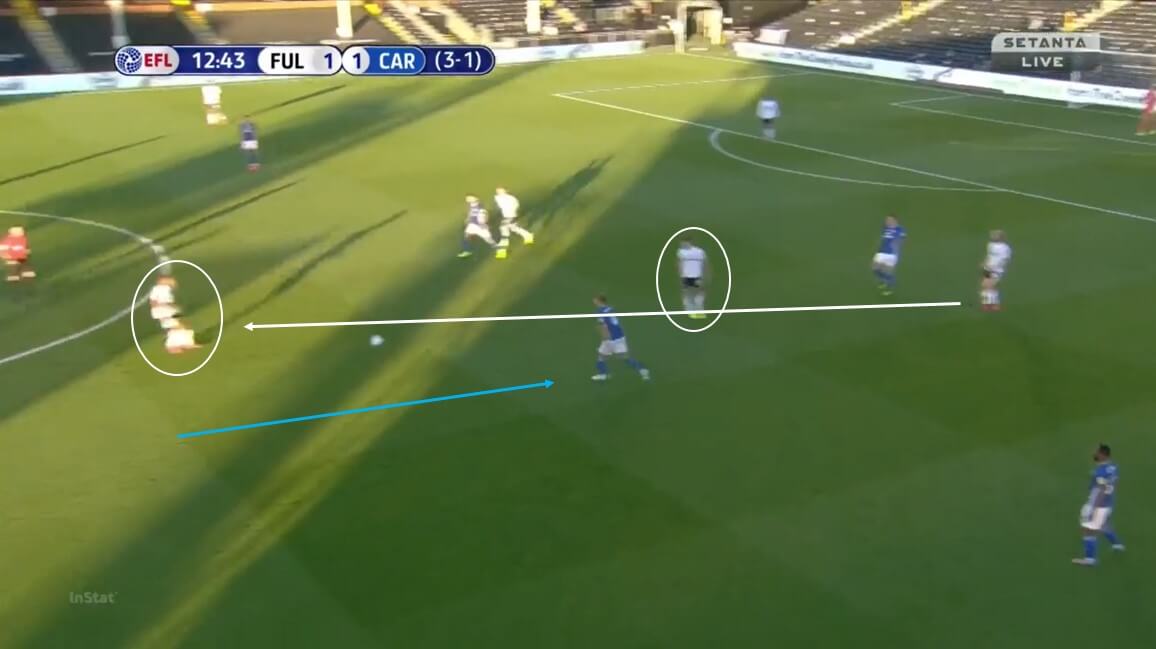 This example illustrates that in practice. Unlike previously, Will Vaulks has decided to come closer to Cairney, vacating his midfield space. Striker Reid then exploits this space by acting as a false nine – something he did regularly and I’ll explore this more later – to receive off Ream who goes in the passing lane between Ralls and Vaulks. 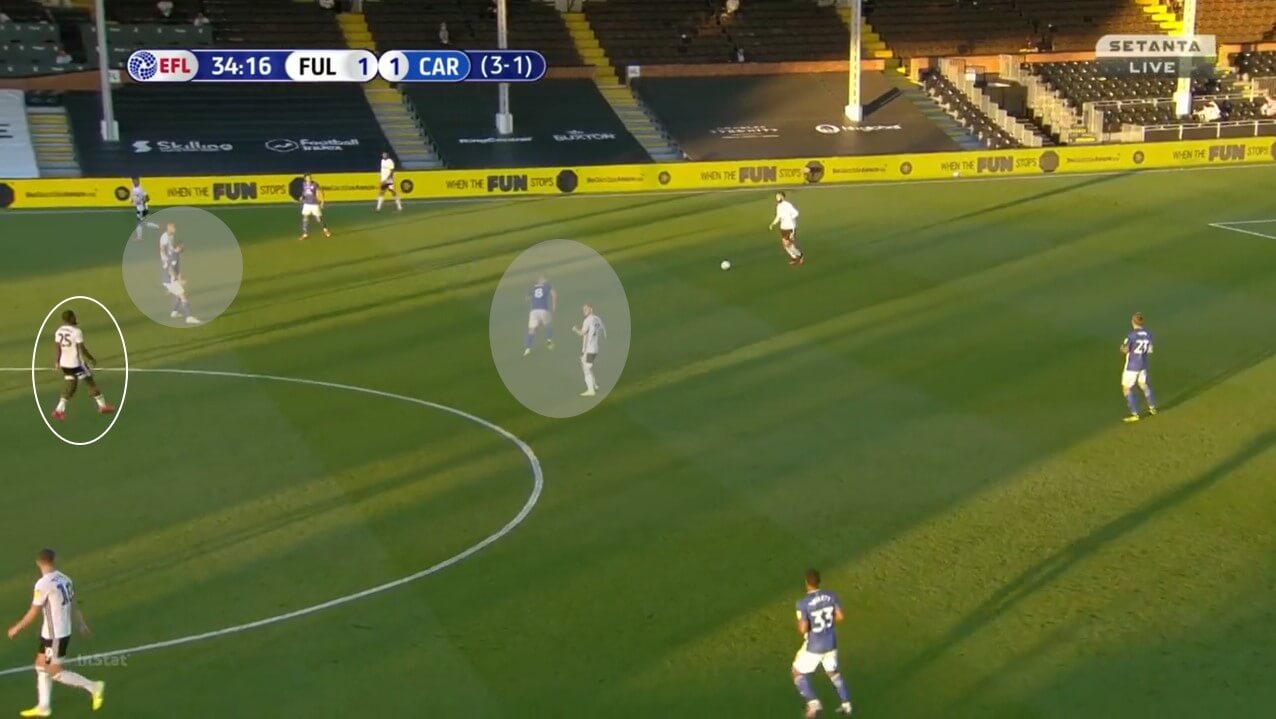 In this instance above, we can see similar principles to what I have already mentioned. Reed is effectively pinning Ralls and can become free via a slight movement. Onomah is splitting Marlon Pack on the left and also Ralls. Interestingly, Reid has come even deeper, now being parallel to Pack, and creating a 2v1 with Onomah on the other side.

Despite being behind on aggregate entering this game, Cardiff did not press particularly aggressively. Instead, the Bluebirds seemed content to sit in a mid-block and engage only when conditions were favourable to them. Indeed, there were mainly focussed on restricting access to the half-space – a pass into this zone led to Fulham’s solitary goal. Nevertheless – as I’ve spoken about – there was an element of freedom to press when needed. 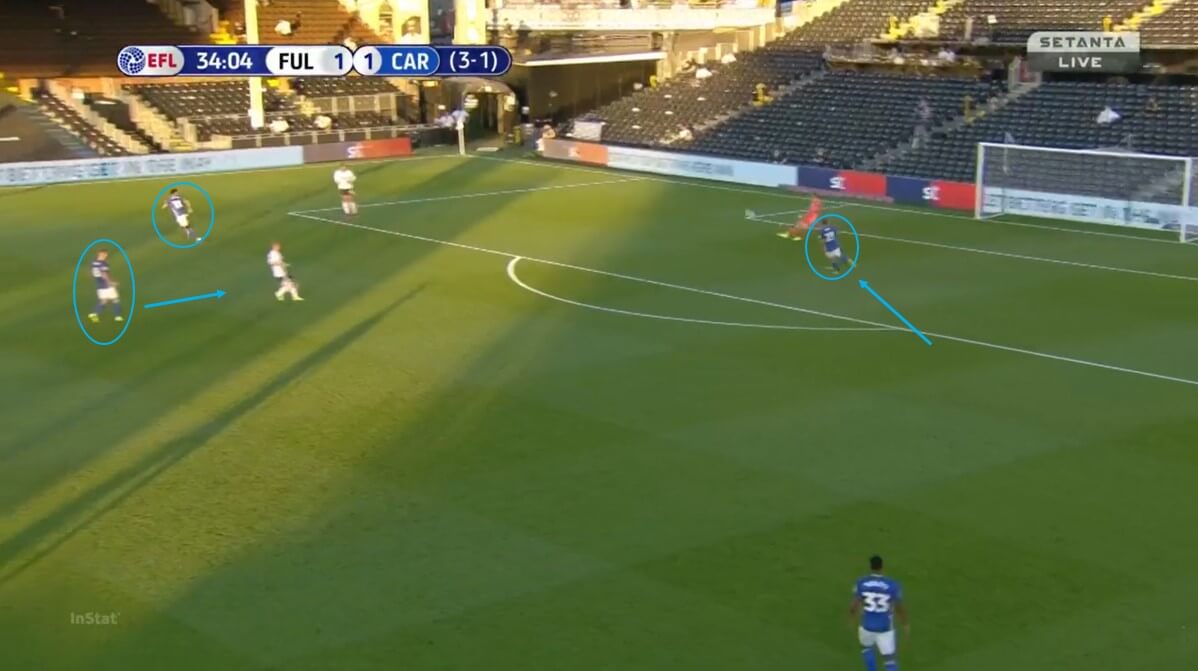 The image above illustrates the basic structure of the front four. Ralls is close to Reed, negating that passing lane for Fulham. Perhaps, setting pressing traps involving Reed would have been an interesting tactic, due to the volume of Cardiff players around him and his arguable weaknesses on the ball – similar to Liverpool’s pressing tactics. Elsewhere, no.11 Murphy initially prevents right-centre-back Hector from receiving, before turning to engage right-back Cyrus Christie following the goalkeeper’s chipped ball. This in itself is because of Danny Ward’s curved pressing run, meaning Ream cannot be accessed on the far side.

The half-space area holds strategic importance as it offers optimal vision and angle for attacking players to operate in. Fulham have encountered problems at times this season with their build-up becoming overly predictable and generally stagnant. Subsequently, protecting such a key area would make Fulham’s task even harder. We can see a good example below. Reed has hold of the ball deep while Striker Reid has drifted across, a common tendency of his. The former Cardiff player is located in a pocket of space but, crucially, is surrounded. This quartet also includes the left-centre-back Curtis Nelson and Pack. Consequently, it is important to be wary of Fulham players running into, or standing in central space that is now not occupied to the same extent. 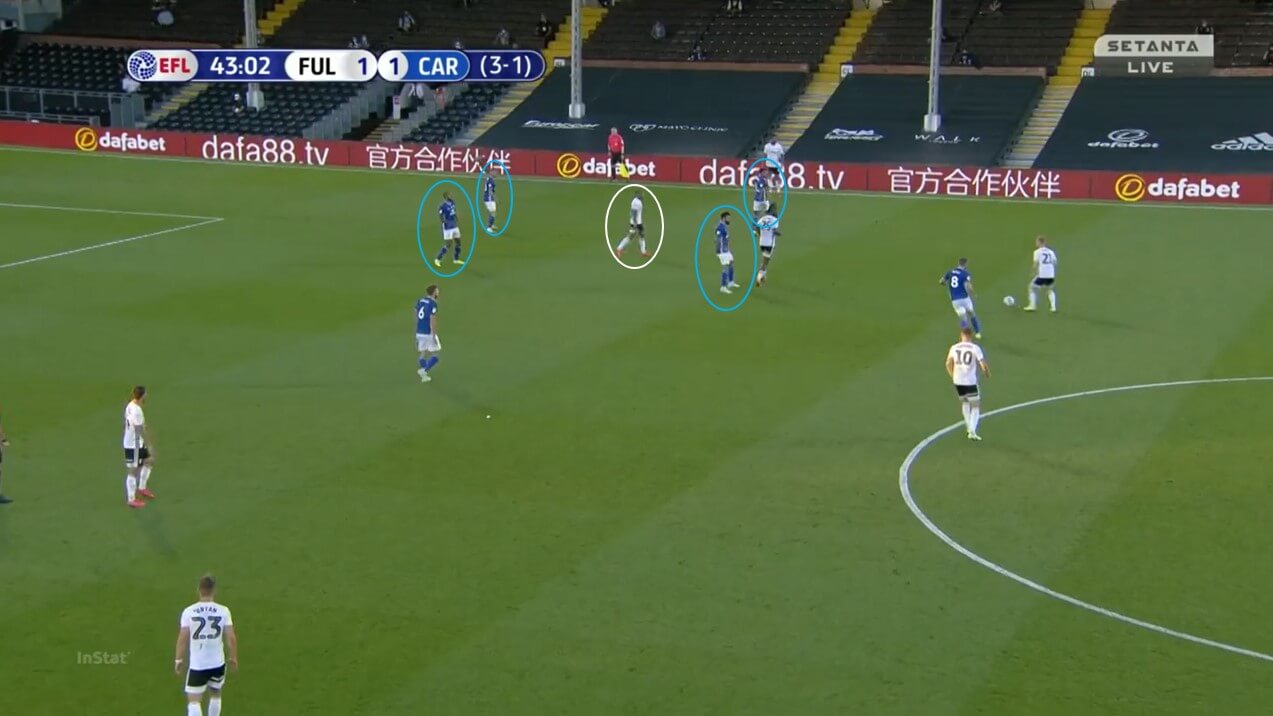 Again here we can see there is intense occupation in and around the half-space, with better staggering evident as well. In this instance, Pack is man-marking Onomah in the most dangerous place spatially. Ralls is also doing the same to Reed. One aspect to be considerate of though is not being caught out by a quick switch of play to the underloaded area, where there can be a 1v1 versus the full-back, or even a 2v1 involving an overlapping full-back. 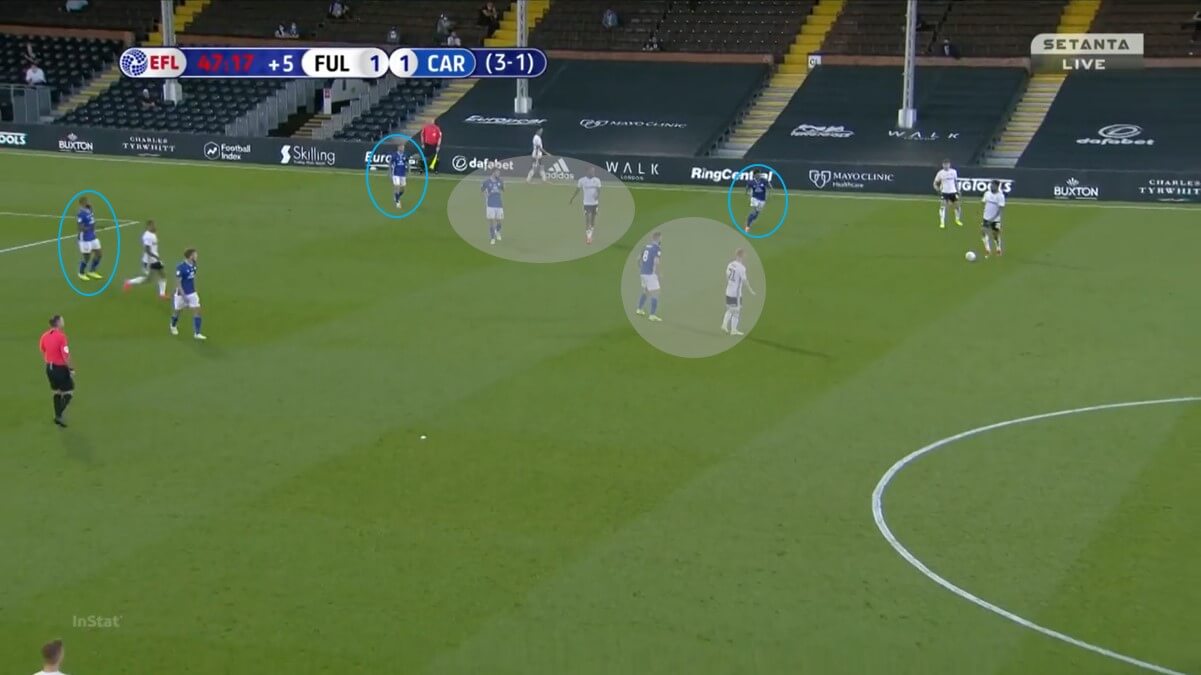 The left-back Joe Bennett in this example below is fine with stepping out to press Onomah to stop him having any time in the same half-space. Murphy and Pack are also close by if needed. 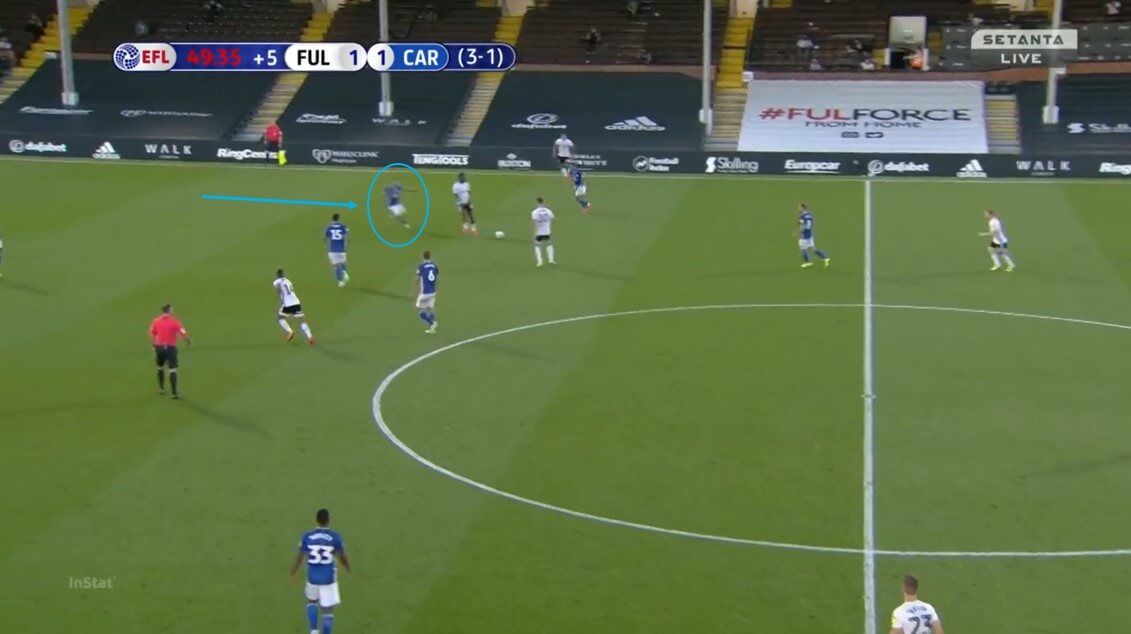 Reid’s profile is much different from that of Mitrović’s. The Serbian prefers to remain central and act as a focal point, being the target of aerial balls, relying on his physicality and aerial dominance to be successful – which he definitely is. Reid, however, roams about seeking to create overloads or drag defenders out of position for his teammates to take advantage of. In this game, the 27-year-old offered a real threat and showed great tactical awareness. 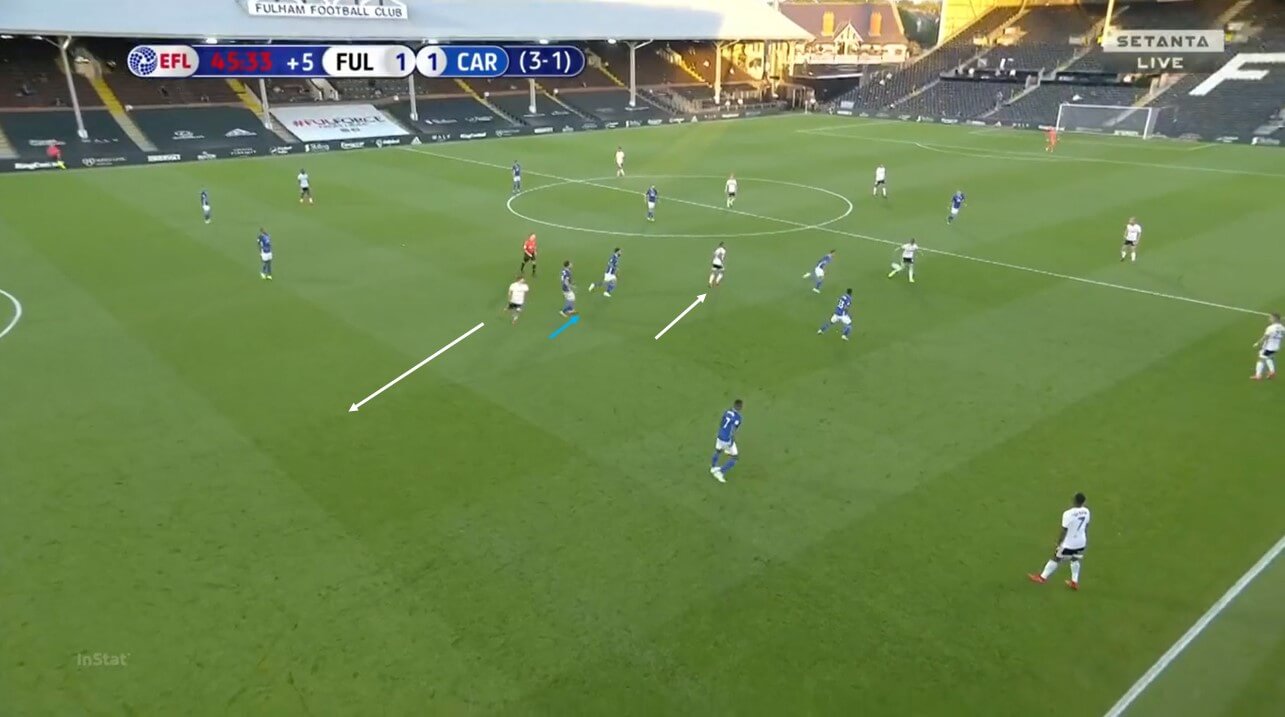 Here is an excellent example of what a false nine can provide. Reid moves deeper with a pass, subtly attracting the attention of both Pack and right-centre-back Sean Morrison. His lay-off back to Cairney allows Anthony Knockaert to move beyond into empty space in-behind the defence. This is also a scenario where an up-back-through combination is executed, involving a ‘third man’ – this can be a very useful tool in breaking down defensive blocks. 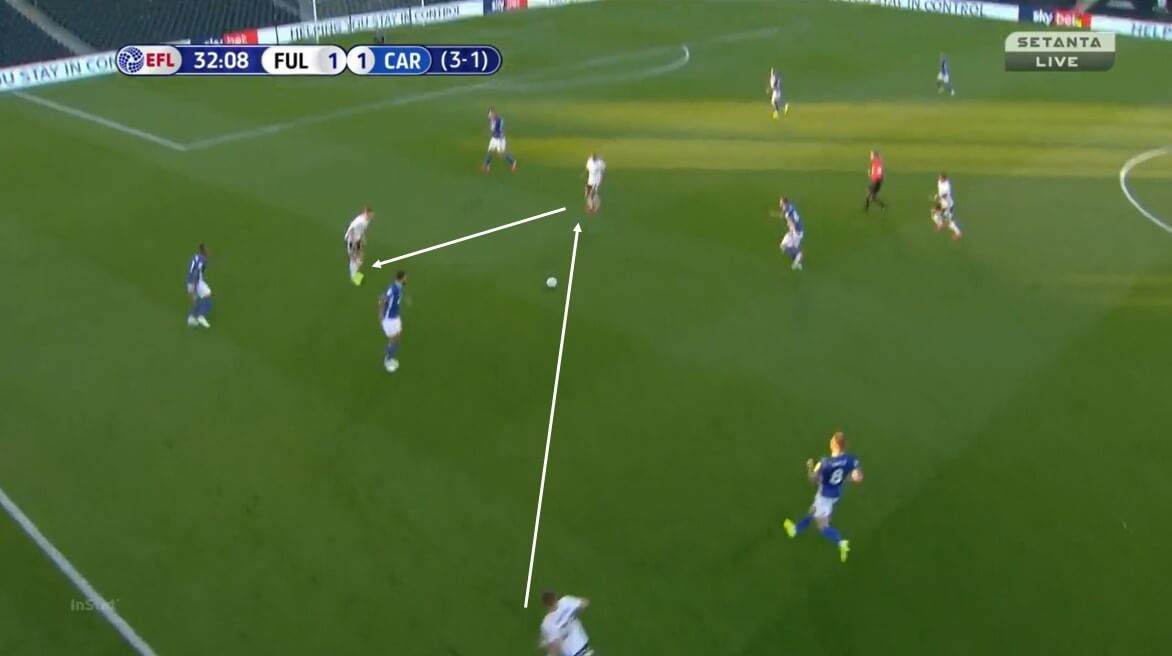 Here Reid drops between the lines, receiving a line-breaking pass off left-back Joe Bryan. The centre-backs are reluctant to follow because of the space in-behind they would be vacating. Therefore, upon receiving possession there is no direct pressure applied to him. As a result, he can play a simple lay-off to the ‘third man’ Cairney, who has positive body-orientation to directly advance. In images from the previous sections, Reid’s tendency to effectively become part of the midfield is also apparent.

It is fair to say Cardiff are a team that thrives off their physicality. Indeed, their long pass percentage from this game was 23%, compared to Fulham’s 7%. Furthermore, they’ve been one of the most productive sides when scoring from set-pieces this campaign. In the regular season, they scored 15 goals from these scenarios. Here, their first was from a corner, and the second, a long throw. 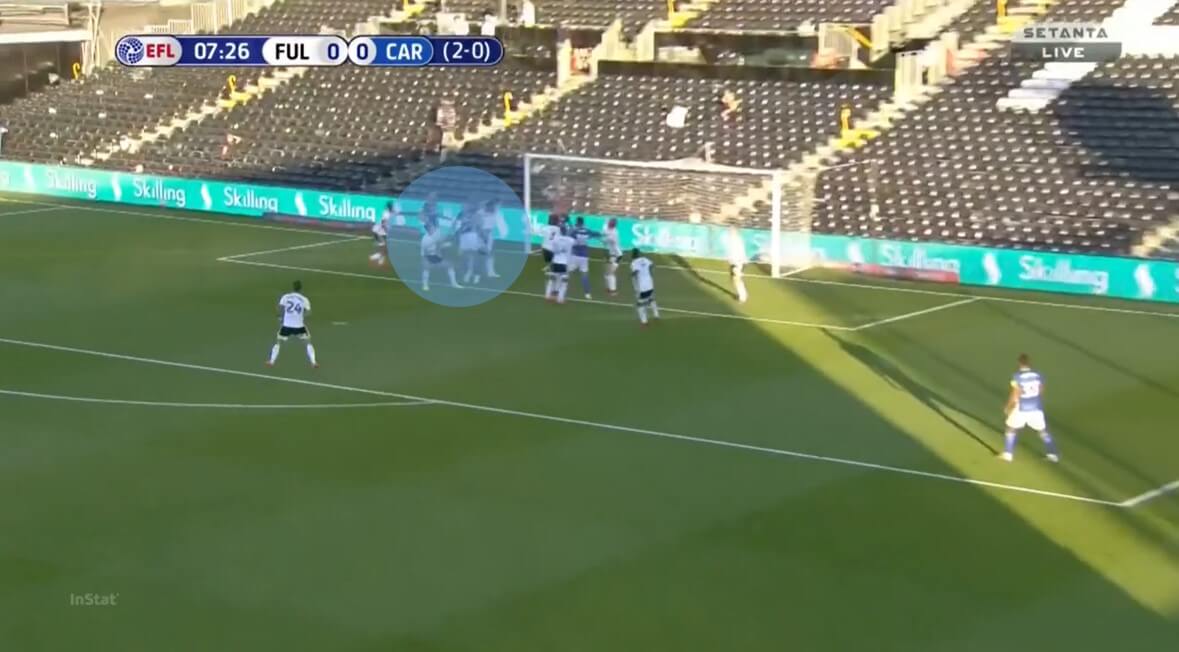 The image above displays the scene from their opener. They opt to overload an area and rely on their sheer aerial dominance to be successful instead of initiating dismarking movements such as the use of blockers. Nelson, with the help of two teammates, simply overpowers the Fulham defenders to score. 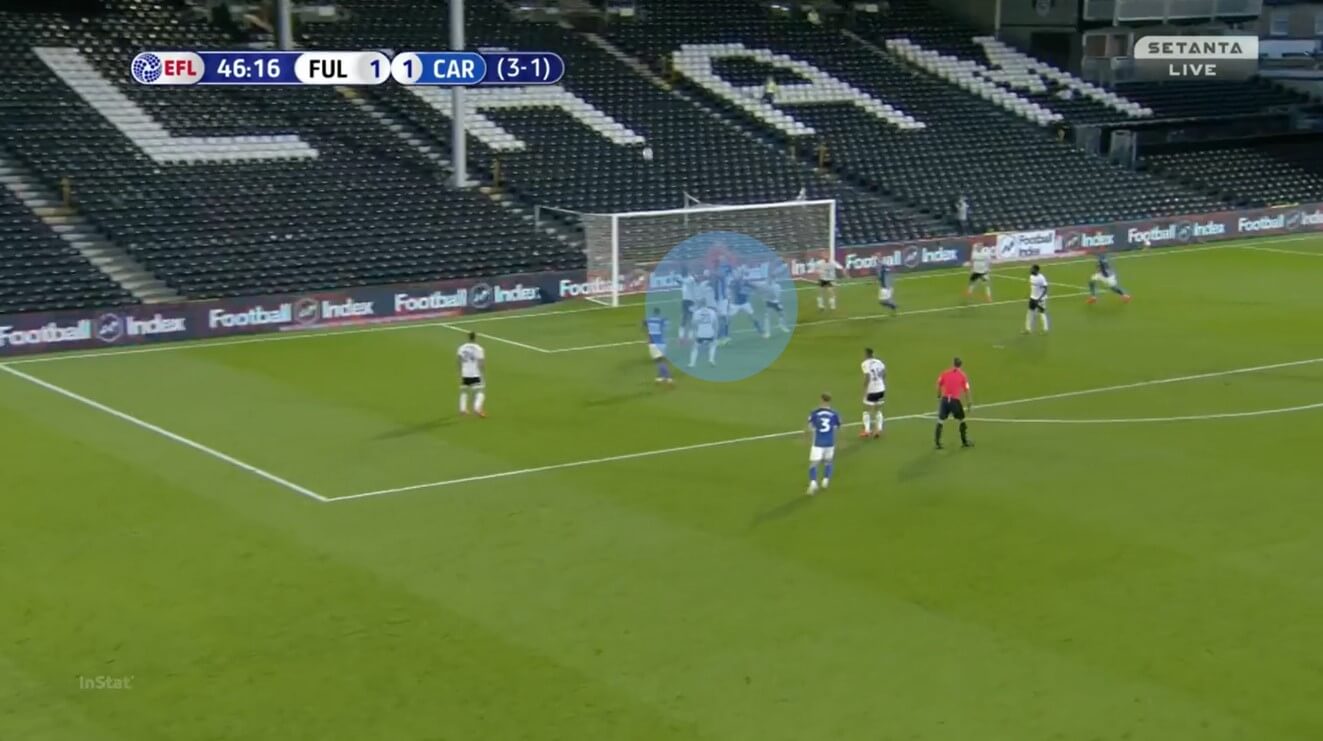 Their second goal had similar principles. The thrower focussed again on a cluster of players who could feasibly achieve aerial superiority. This could also cause a degree of chaos when such a group all attack the ball, and indeed here the ball flicked off a Fulham head towards goal before Cardiff scored in the second phase.

The overarching result here was Fulham reaching the play-off final, courtesy of their win in Wales on Monday night. There they will face off against Brentford, their west London rivals, whom they’ve lost to twice already this season. Despite their success overall, a defeat on the night is not the best way to go into such a huge game. Parker’s team will need to perform better to be victorious against Brentford. Harris will now look towards next season where he will look to build on a solid base since his arrival last November.