In midweek we were treated to a round of games, and the action doesn’t stop there with this match-up between Derby County and Stoke City. Stoke are undergoing a revival of sorts currently under head coach Michael O’Neill. Coming into this the Potters were four games unbeaten in the EFL Championship, including eye-catching away win’s at Huddersfield and high-flyers West Brom.

Derby have had an inconsistent campaign thus far. Phillip Cocu’s arrival in the summer has not brought about the boost Derby fans will have hoped for and they’re currently languishing in 16th place, 10 points off the play-off positions.

In this tactical analysis, we shall dissect the tactics employed by both teams and use analysis to see why Derby got the three points. 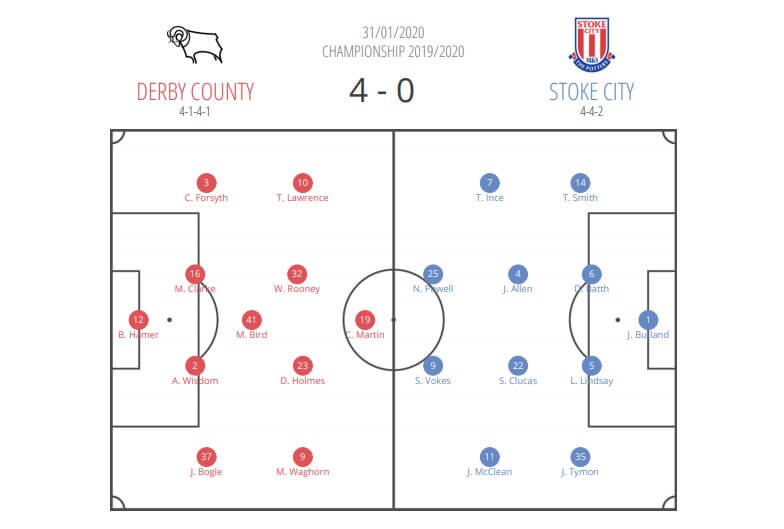 Both managers opted for a 4-2-3-1 formation. Derby, coming off a disappointing 3-2 defeat at bottom side Luton Town, made a total of two changes. Veteran striker Chris Martin came in at centre-forward allowing Martyn Waghorn to return to the wide-right position. Additionally, Craig Forsyth replaced the suspended Max Lowe at left-back.

Stoke made just a single change, also at left-back. Bruno Martins Indi reported feeling unwell and it was left to Josh Tymon to fill in and make his first start of the season.

Playing two wingers on opposite sides to their stronger foot means they will naturally come inside centrally. In addition to this, the two Derby full-backs are attack-minded in nature and like to affect the game in the final third, these tendencies complement each other perfectly. This attacking nature is showed by the fact Forsyth got an assist and Jayden Bogle rounded off the scoring. Wayne Rooney, whilst dropping deeper in the later stages of his career, possesses the technical ability to make a valuable contribution to the Rams attacking play.

The impact of the wingers can be seen in Derby’s first goal, shown below. Lawrence has followed Stoke right-back Tommy Smith shifting across, whose attention is occupied in case of a run in behind. Waghorn has received a pass in the right half-space between the lines with the ball on his favoured left foot. Acknowledging the free space down the left flank and the opportunity for a through ball Forsyth makes a blind-side run past Tom Ince to receive off Waghorn. As the play develops Forsyth crosses the ball and Waghorn is there again for a diving header to put the home side ahead. 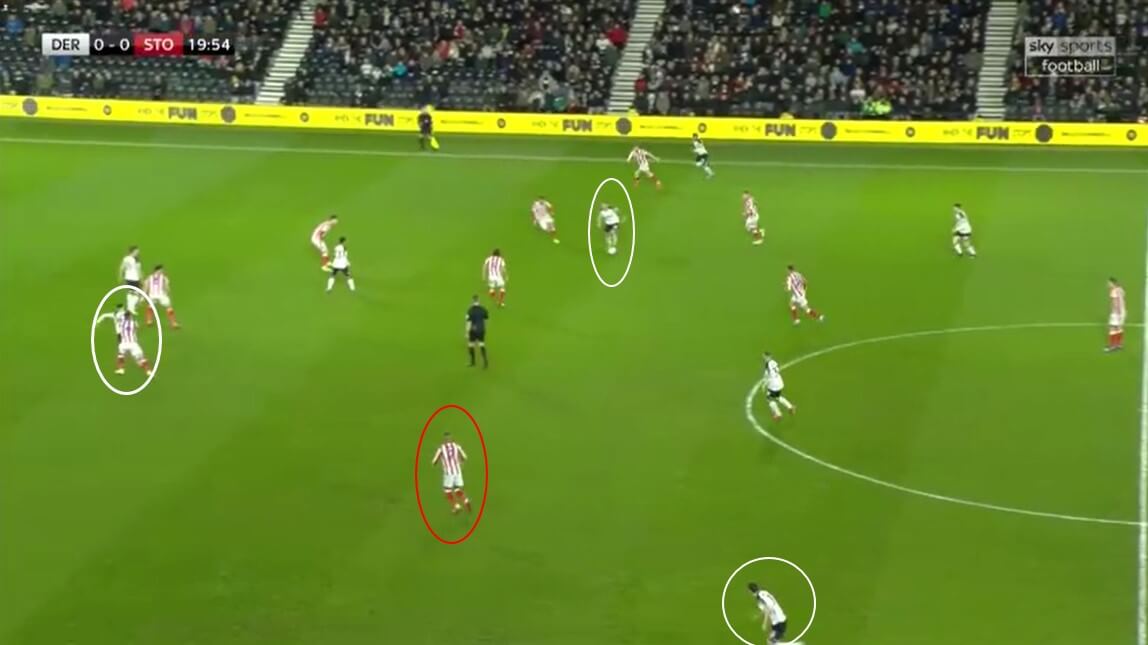 This image below illustrates the general structure of Derby’s build-up. Max Bird and Rooney are visible as the double pivot, while both Duane Holmes and Tom Lawrence are situated in the respective half-spaces between the lines. From here Holmes and Lawrence can utilise their ball-carrying abilities. Lawrence is a more direct dribbler who has a good long-shot on him, his role is similar to an inside forward. Whereas, Holmes is very nimble – he completed all five dribbles attempted. 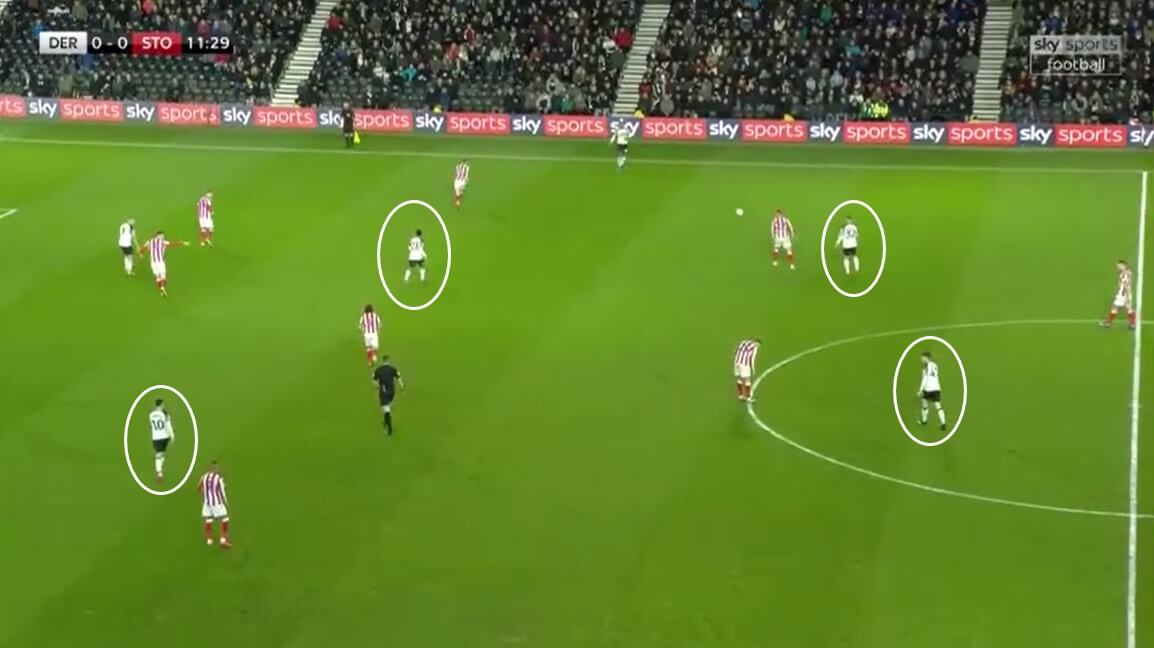 Here, Holmes has received a vertical, pacey pass from Waghorn in a central area. However, the 25-year-old uses the pace on the ball to spin away from Sam Clucas and Liam Lindsay. He holds them off to drive on and play a through ball into Martin, who duly dispatches – seen below.

Holmes being an effective 10 is also apparent in this example below. Bird’s pass splits the defensive midfielders and goes towards the American who has found himself in the perfect position for a no.10. Receiving in such an area is very dangerous and can allow him to utilise his other attacking qualities, such as his aforementioned dribbling ability. 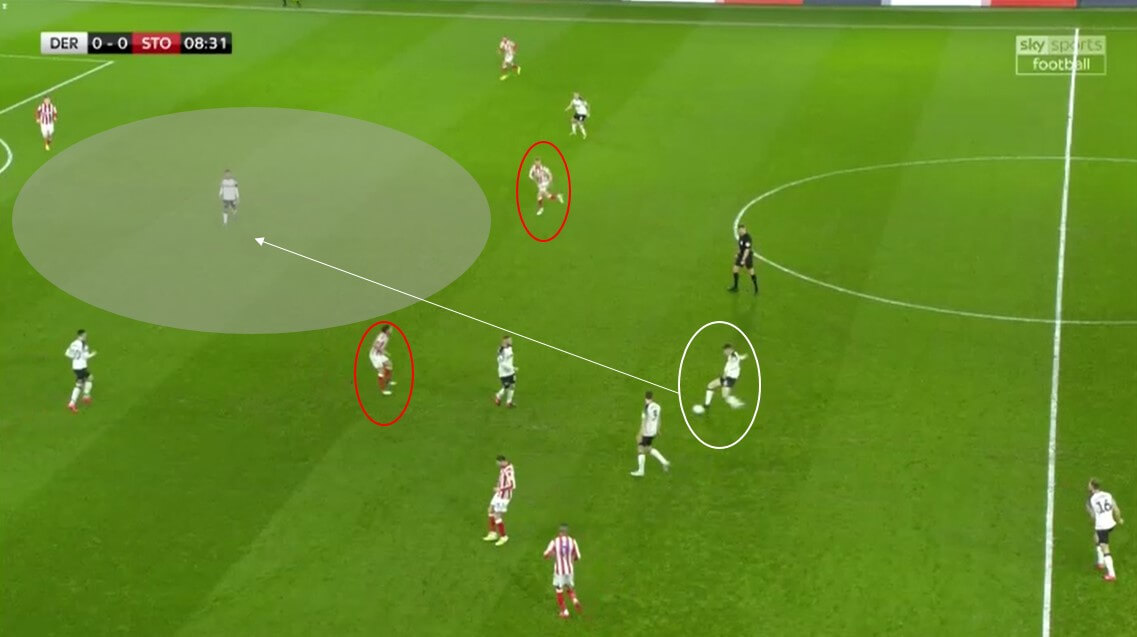 The scenario I just outlined came from a turnover in possession when Stoke were attempting to progress the play into the Derby half but were met with a lack of viable passing options. This was symptomatic of their overall problems, which I shall now analyse further.

Much of the away sides ball progression revolved around Sam Vokes. Standing at 6’1” with a large frame the Welshman is your archetypal target-man. Direct play into a lone striker means it is imperative to provide support options when he’s receiving. If not, attacks cannot be sustained and will routinely fizzle out. Unfortunately for the away side this did in fact happen, resulting in only one shot on target all game.

The directness of Stoke’s play can be seen by the average pass length of their centre-backs. Danny Batth’s was 25.4m and Lindsay’s was 23m. Both of these statistics are greater than the Derby centre-backs. One of the reasons Stoke had to go was the absence of rotations or movements away from their designated positions. 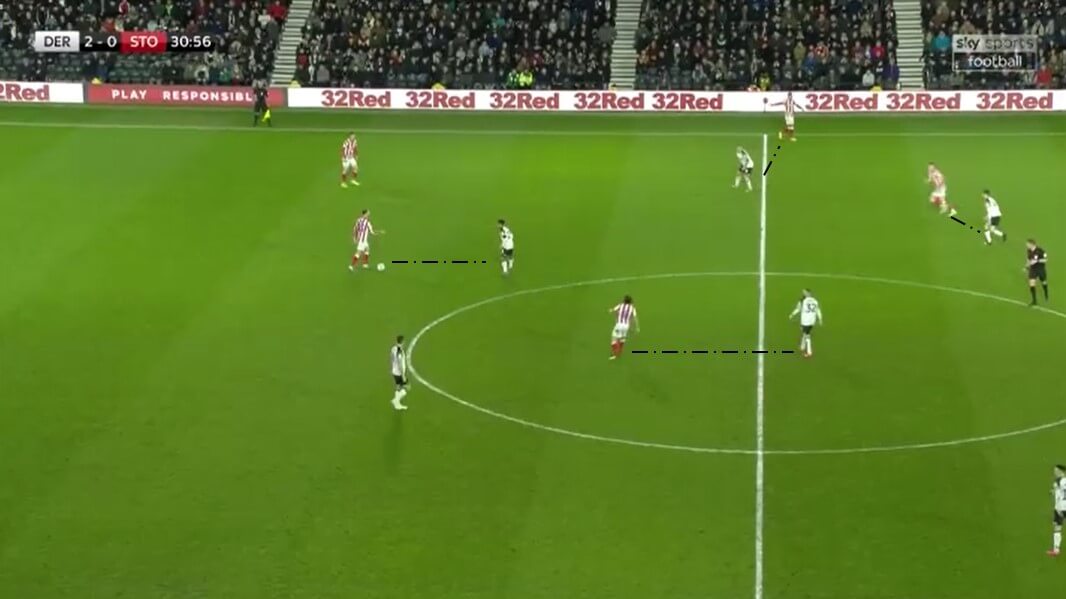 Look here above, Nick Powell has possession in the middle of the park, but, the players ahead are static, this, combined with a compact, staggered defensive shape from the home side, results in the ball eventually going back and being played aimlessly forward ceding possession.

Another problem Stoke faced was the ball being played into players that aren’t aerially dominant, plus, not players into dangerous areas or giving passing options. Mix that with poor execution and you get an end-result that is non-productive in an attacking sense. 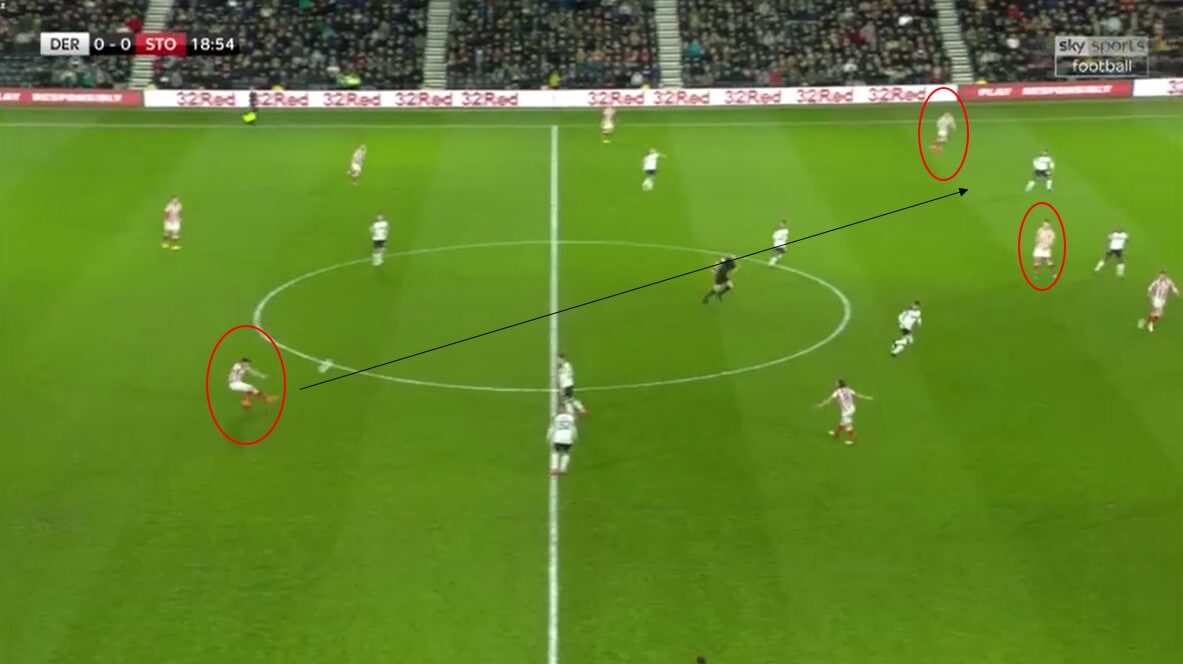 In this case above Batth goes for a ranging ball over for James McClean on the left-wing. Yet, the Irishman is only 5’9” and the nearest teammate is Vokes who is quite the distance away. Batth miscues it though and the ball runs through to the keeper – 5 out the 13 long balls he went for were successful. The statistics also prove the Potters attacking deficiencies. The away side only managed 0.28 xG throughout.

Manchester United’s highest-ever goalscorer may now be in the twilight of his career but he’s still effective as ever. In this clash, he managed one assist, three key passes and a sumptuous free-kick goal.

Although it was his role as a midfield dictator that helped the home side so much. Partnering academy graduate Bird he provided composure and seemingly endless time on the ball. Rooney successfully completed 88% of his passes and four of seven long balls. One of his common movements was dropping into the left half-space. His heat-map is above. This allowed him to open his body and explore the possibility of a cross-field ball towards the right flank or a line-breaking pass into most likely Holmes. Another benefit of this subtle action was that it could attract Ince to press him. Pressing is not the winger’s speciality and this move could give Forsyth more space to work in. Ince abstaining from his defensive work, whilst being semi- occupied with Rooney advancing led to the first. 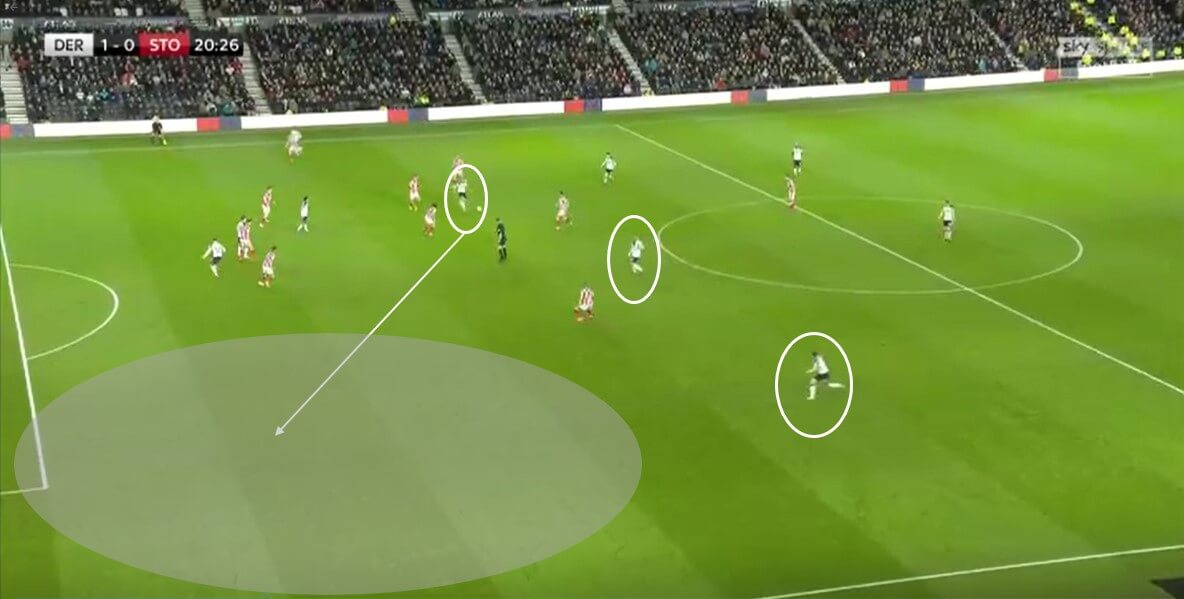 In the example above we can see Rooney in a more central position, available to receive from Waghorn in the middle. Because of Rooney’s positioning, Ince’s attention is momentarily drawn to him, instead of the overlapping Forsyth. Stoke’s defensive structure is completely unbalanced as a whole but Rooney merely stepping into a pocket of space subsequently gives Forsyth enough time to pull the ball back towards the penalty spot.

Below is a situation that frequently appeared throughout the game. The Man United legend has collected the ball off left-centre-back Matt Clarke. A difficult, but manageable switch of play to Waghorn wide left is on. Also, Lawrence is making a depth run in-behind, while striker Martin does come short to get the ball. 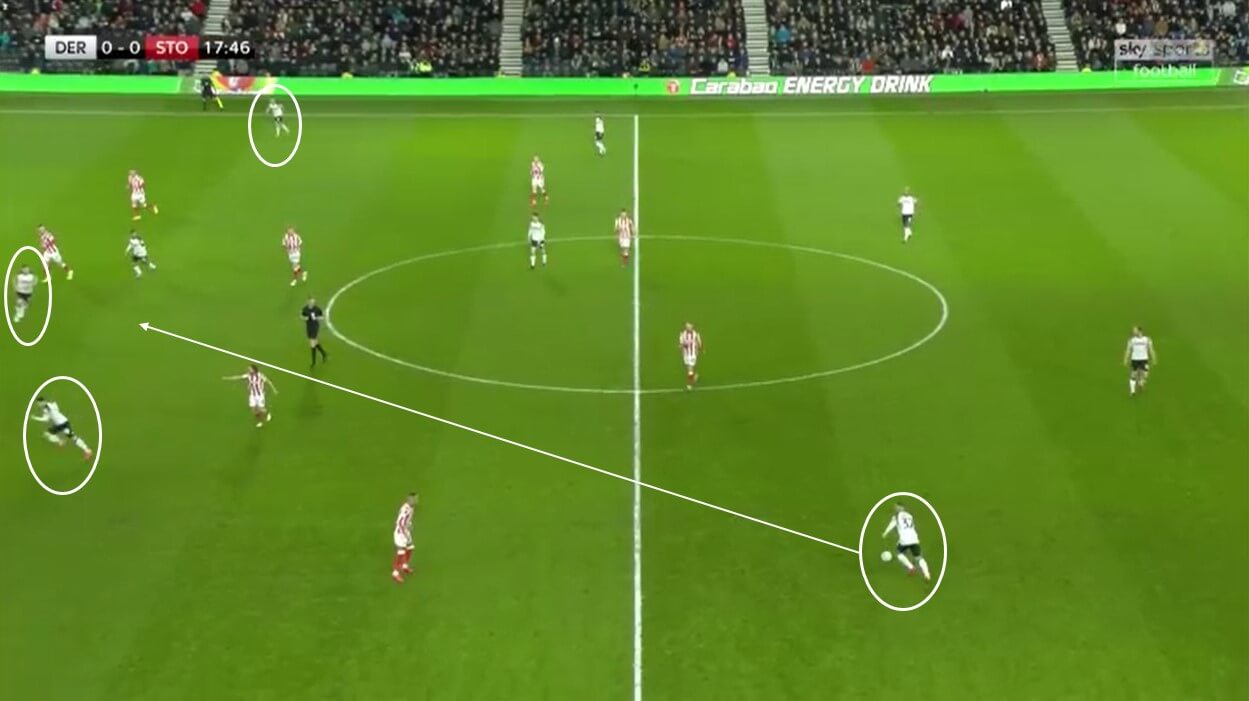 O’Neill’s side never got sufficient control and dominance of the 34-year-old and were generally too passive without the ball. Lining up in a 4-4-2 out of possession and limited staggering to their defending, meant that the Cocu’s side could manipulate and unbalance the Stoke side, as I’ve shown.

Derby’s incredible home form continued here with aplomb. The Rams have now picked up a huge 32 out their 40 points at home – the second-best collection in the league. We saw a great amount of fluidity and incisiveness in their play in this game that has not been present for the majority of the campaign. A performance that rolled back the years from Rooney very much helped and gave the Rams midfield a calming presence. To mount any sort of realistic play-off push their away form will have to drastically improve, starting at Swansea in their next league game.

Stoke never offered a concerted attacking threat, their attacking play lacked complexity and was simple to defend against. O’Neill didn’t make any game-changing tactical or personnel switches at half time to try and turn the tide which contributed to an overall easy ride for Derby.