Matchday 25 of the Premier League saw fourth-place Chelsea visit the King Power to take on third-placed Leicester City. Both teams’ seasons have somewhat mirrored each other in that they both started the season strong, but have somewhat struggled in recent weeks. This match was a chance for both teams to show any improvements against a top side, however, both fell short, claiming a point each in the 2-2 draw. This tactical analysis will look at which periods of the match each team dominated, what both teams struggled with, and key players in deciding the outcome of the match.

Brendan Rodgers set his team up in his preferred 4-1-4-1 formation. Kasper Schmeichel was in net, with a back four of Ricardo Pereira, Jonny Evans, Çağlar Söyüncü, and Ben Chilwell situated in front of him. Hamza Choudhury occupied the defensive midfield role as Wilfred Ndidi, Leicester City’s first-choice defensive midfielder, has been in and out of the squad due to injury. Ayoze Pérez along with Harvey Barnes occupied the wings, with James Maddison and Youri Tielemans playing centrally. Jamie Vardy led the line-up top as a lone striker.

Frank Lampard’s team news came as a bit of shock when announced, with first-choice keeper Kepa Arrizabalaga being dropped in favour of Willy Caballero despite the former not having an injury, as confirmed by Lampard that his decision was from a tactics point of view. The backline just ahead of Caballero consisted of Reece James, Andreas Christensen, Antonio Rüdiger, and César Azpilicueta. Lampard opted with a double pivot in midfield with N’Golo Kanté and Jorginho, with Mason Mount situated ahead of them. Callum Hudson-Odoi, Pedro, and Tammy Abraham led the line as Chelsea’s front three.

Chelsea dominate the first half

It really looked to be Chelsea’s match to win in the first half, especially near the beginning. They looked energetic, and lively, while Leicester City seemed tired from their League Cup match against Aston Villa.

Chelsea started the match off so well because of how fluid the front four were in their positioning, with and without the ball. This had Leicester City struggling, as they found it difficult to defend against.

Hudson-Odoi repeatedly going inside, and playing centrally was a common theme throughout the match, and Leicester City struggled to defend against his actions, as more often than not Hudson-Odoi would be able to exploit gaps that the Leicester City defenders left (as seen above), or they would overcrowd him, which would free some space for Hudson-Odoi’s teammates.

Mount was also very much fluid in his movement, specifically whilst Chelsea was in possession. He also took up more central positions, but higher up, in line with Abraham. The risk of having a lone striker is that they can easily get isolated. Having Mount along with Abraham acting as a second striker frees up Abraham, and gives the two Leicester City centrebacks more to do. The above instance shows Mount in the box, in the position where a striker would be, as does the example below.

Leicester City improve in the second half

Leicester City definitely grew into the match, showing signs of improving at the tail end of the first half, and continuing to grow in confidence in the second half, despite conceding a goal in the 46th minute.

Leicester City were not necessarily bad in the first half, just sloppy. Despite conceding the first goal, in the second half, they were able to press better as a unit and keep better possession of the ball, something that they struggled with earlier in the match.

In the second half, Leicester City were much more organized, both on the ball, and off the ball.

Despite the match ending 2-2 both teams really should have scored more goals. The lack of good shots hindered the performances, as mentioned above, both teams enjoyed good spells that got them into good positions into the final third.

These are poor stats from both teams. Top teams in the Premier League should be making more of those shots, especially the ones from inside the box, as neither team were playing deep or compact (something that may happen when a top team plays a team lower in the league).

As mentioned earlier, Arrizabalaga was dropped in favour of Caballero, a huge call by Lampard. It is rare to see goalkeepers dropped unless for injury, however, based on Arrizabalaga’s form, Lampard does have a strong argument.

With a save percentage of 55.6%, Arrizabalaga has statistically been the worst keeper in the league this season. He has struggled with claiming crosses, being commanding in his box, and in general organizing his defence. So how did Caballero fare against Leicester City?

It is hard to judge because Cabellero did not have a whole lot to do. As mentioned above, Leicester City seemed to shoot everywhere but the target. Caballero made two saves during the match but ultimately was unable to keep the other two that were on target. He was also unsuccessful in making any claims on crosses against him, a skill that is so important in retaining possession, and not allowing the opposition to shoot from second balls. 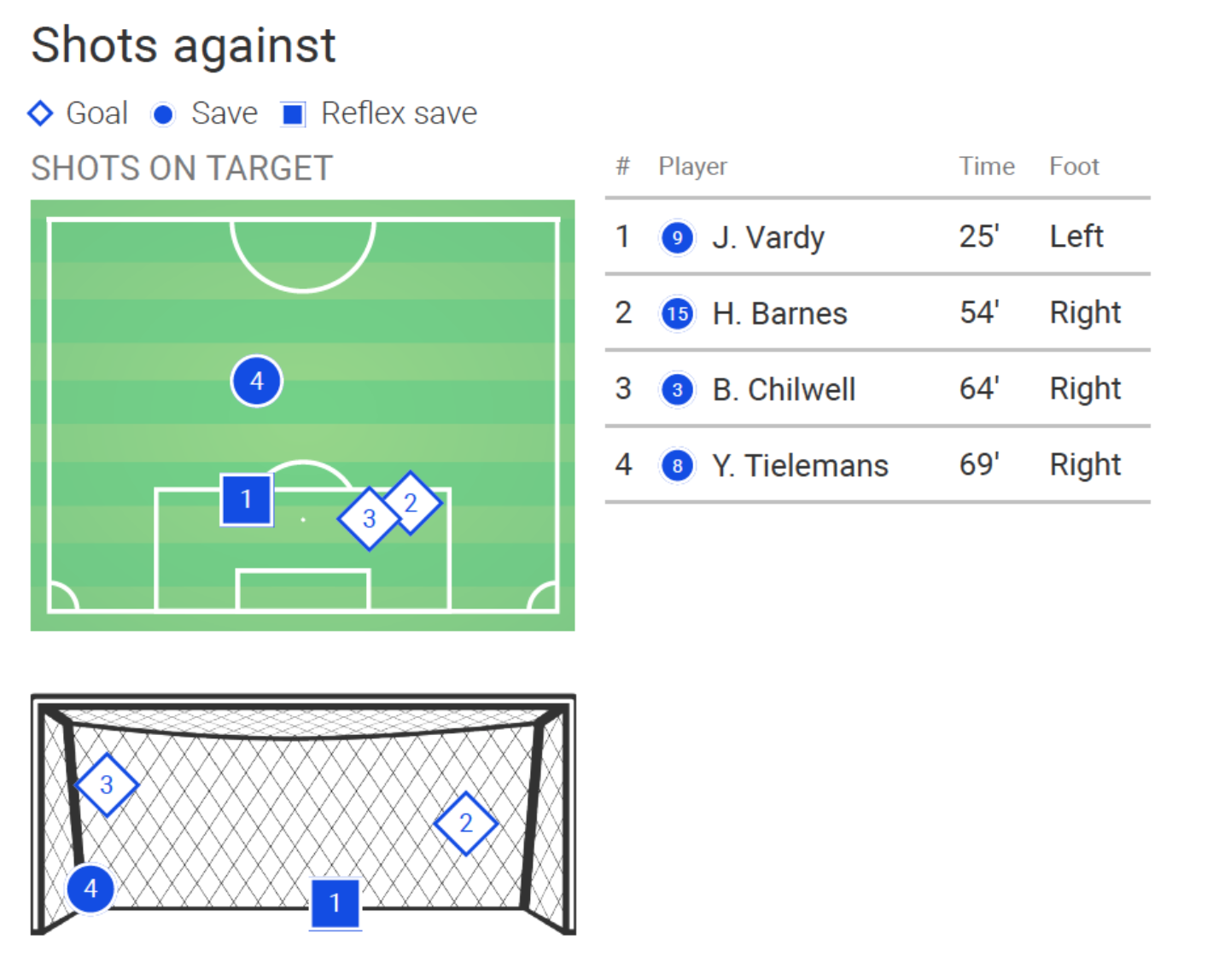 It will be interesting to see how Lampard tackles the goalkeeper situation for the rest of the season, and wether being benched will improve Arrizabalaga’s form, or further drown his confidence.

An analysis of both teams showed that it was quite an even matchup, and a point apiece was fair. It is hard to determine who gained more by having this match end in the draw, but ultimately  Leicester City will be more pleased with the point, despite being at home. Of course, they would like to maintain the pressure on Manchester City, but their number one goal is maintaining a Champions League spot. They have a good cushion for that, and they should be finishing in the top four for the first time since their league winning season. The point does look good in hindsight as well, with Manchester City dropping all three points to Tottenham Hotspur later in the weekend.

On the other hand, Chelsea really could have used those three points to gain a cushion, and not risk dropping down to a Europa League spot. With Tottenham’s win, they are only four points shy of Chelsea. Furthermore, they are yet to play four of the top six, with their next two matches being against Manchester United, and Tottenham themselves, as well as having to play Manchester City and Liverpool later in the season. Chelsea’s top-four finish is still in their hands, but only just – and we still have a ways to go until the end of the season.