As Leicester City hosted Aston Villa in the first leg of the English League Cup semifinal, both clubs knew they had a valuable opportunity ahead. The Foxes could move one step closer to earning concrete evidence of a highly successful season in the form of silverware. The Villans, on the other hand, could earn a positive result despite losing the second-most matches in the Premier League this season with 12. This tactical analysis will examine the systems of both teams and dissect how Aston Villa were able to match an overall superior side. 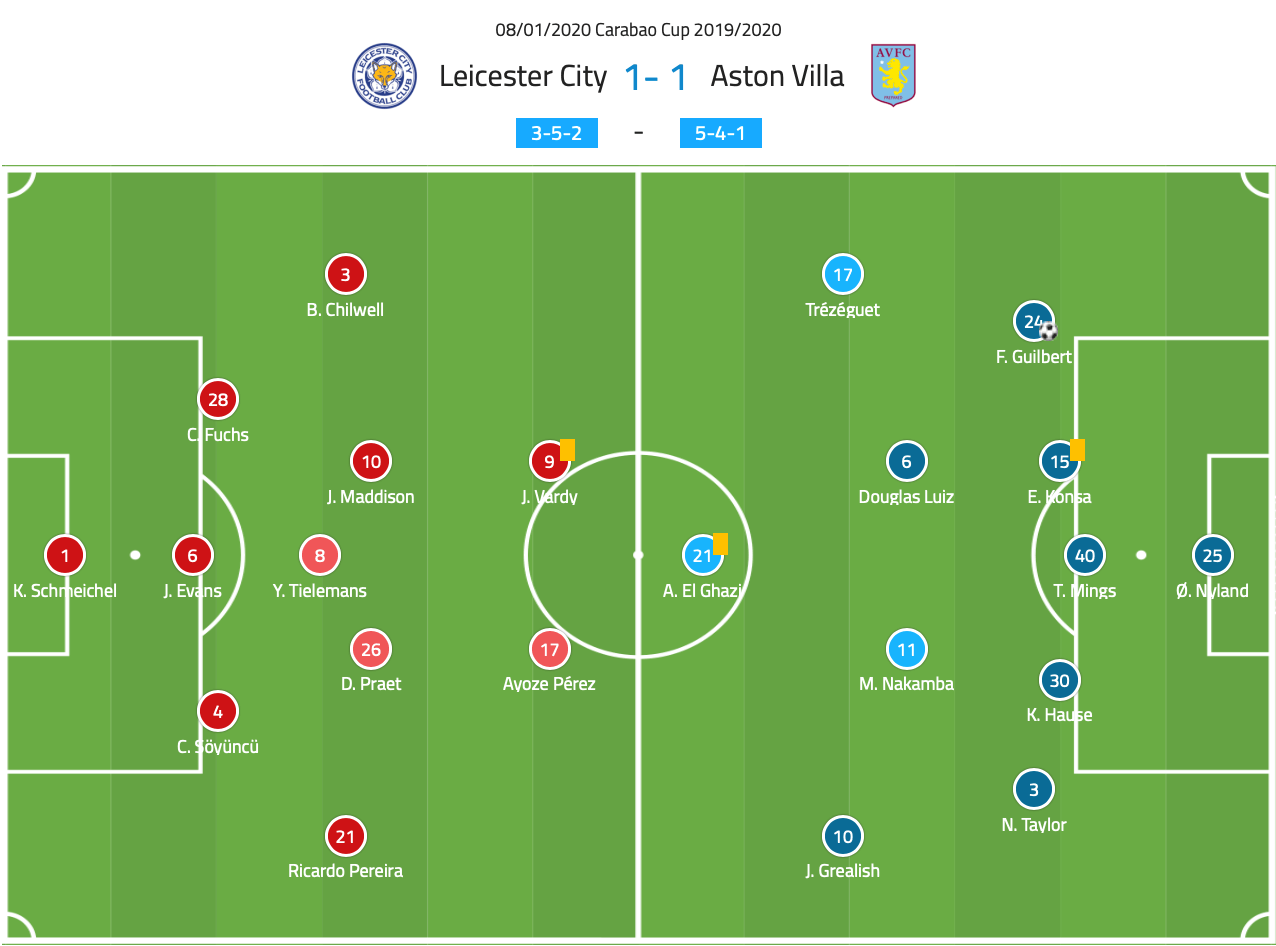 Brendan Rodgers organised his side in a back three/back five formation, a setup Leicester had only run once this season in a  victory against Newcastle. Çağlar Söyüncü, Jonny Evans, and Christian Fuchs started as the centre-back trio, with the usual full-backs Ricardo Pereira and Ben Chilwell as the wing-backs. A midfield three of Dennis Praet, Youri Tielemans, and James Maddison were also in charge of receiving the ball from the backline and aiding in forward progression. Ayoze Pérez and Premier League-leading goalscorer Jamie Vardy led the front line.

The home side controlled possession for a majority of the match (69%). With the ball, Leicester’s back three comfortably rotated possession despite slight pressure from Aston Villa’s front line. 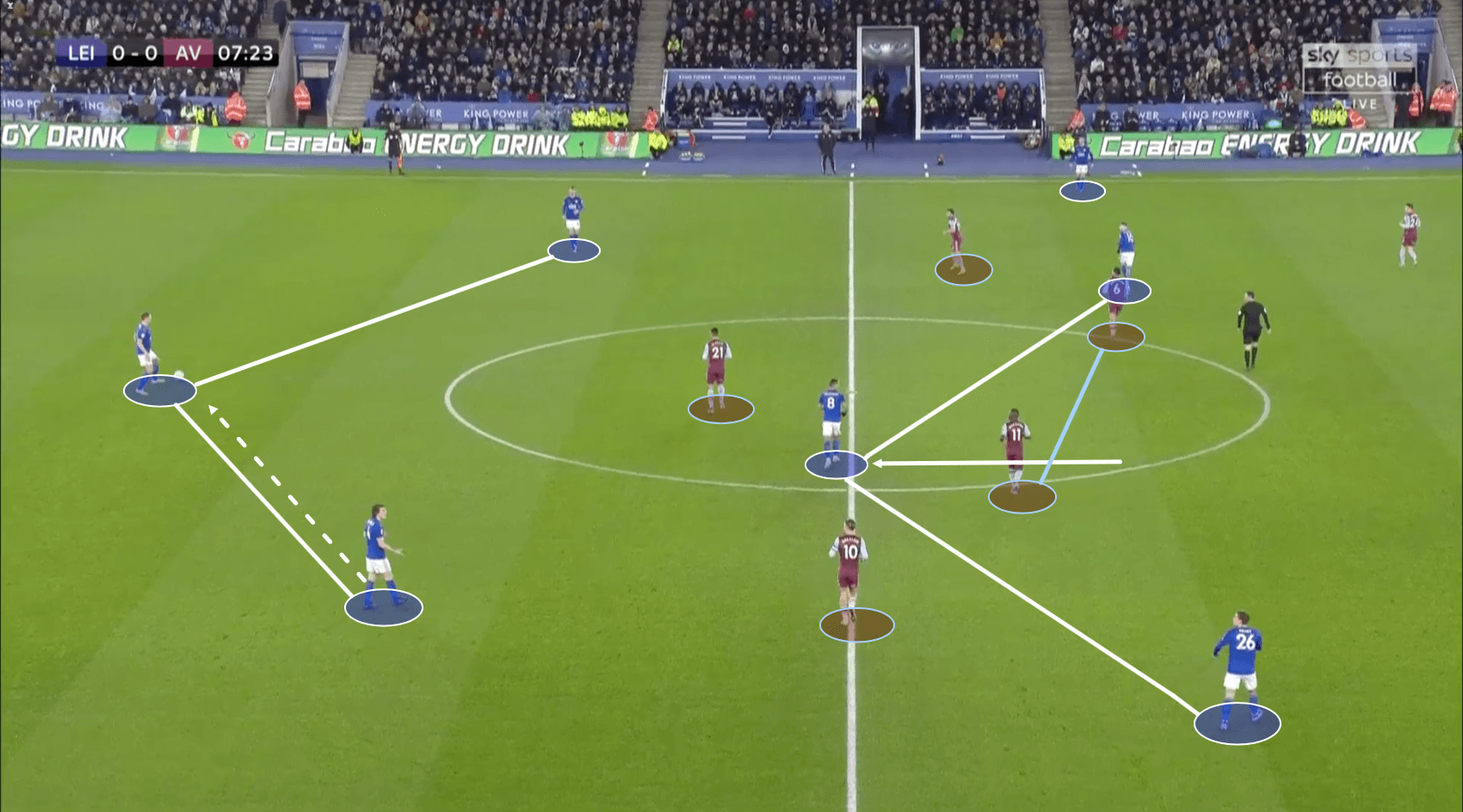 The most common connection in the match, Söyüncü and Evans constantly completed passes to each other along with Fuchs, as all three searched for passing lanes with which to break Aston Villa’s initial line of defence. It was also common to see a midfielder, primarily Tielemans, drop back centrally as a passing outlet to create space or in an effort to turn and become a pivot. Early on Leicester were occasionally able to find such a passing lane thanks to this movement. 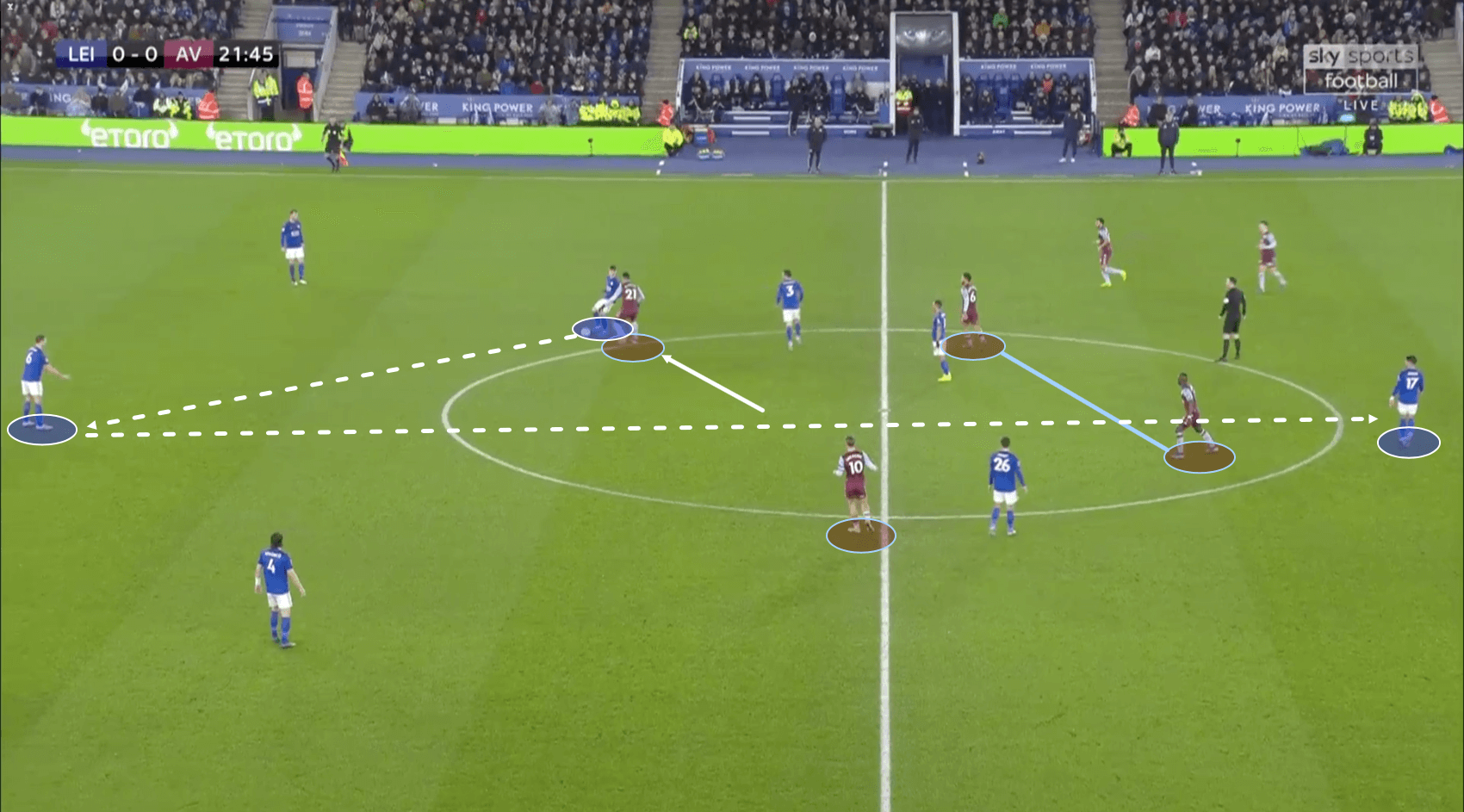 Here, Maddison has dropped into the deeper area of the midfield with the ball. El Ghazi commits to pressing the Englishman, who simply passes backwards to Evans. With the central vertical lane opened up due to El Ghazi’s movement, Evans completes a long pass forward through this channel to Pérez. 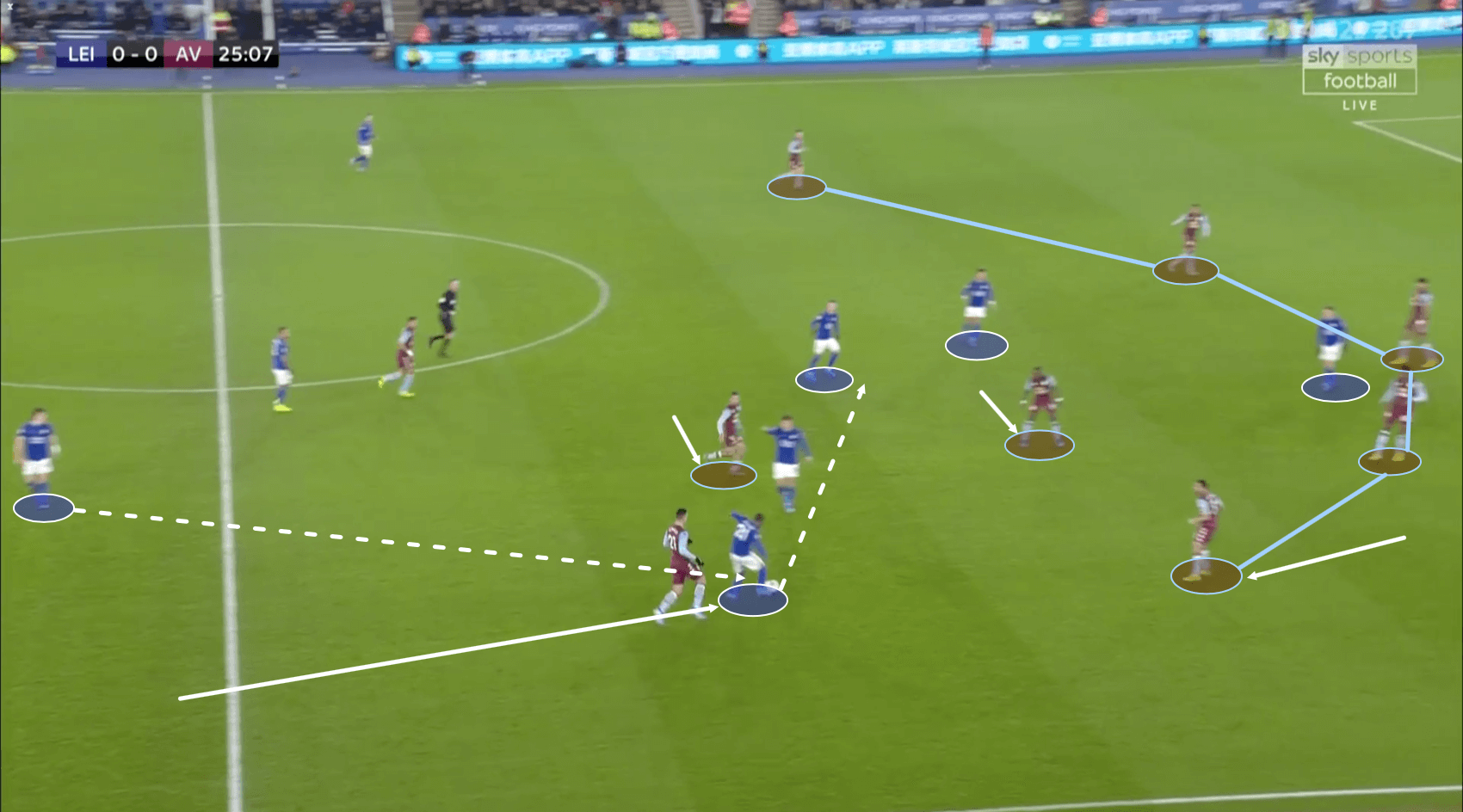 From the back three, the two wider centre-backs Söyüncü and Fuchs consistently linked with the wing-backs. The example above shows Pereira making a darting run past El Ghazi and receiving a pass from Söyüncü. Once in this position, Aston Villa’s wide overload was bypassed via Pereira’s pass centrally to Maddison in open space. Pereira was involved in three of the top five final third connections across the entire match for Leicester.

Despite this variety in buildup, the defensive pressure from Aston Villa’s midfield block of Luiz and Nakamba flustered Maddison, Praet, and Tielemans enough to force Leicester’s attacking progressions into the wide areas. 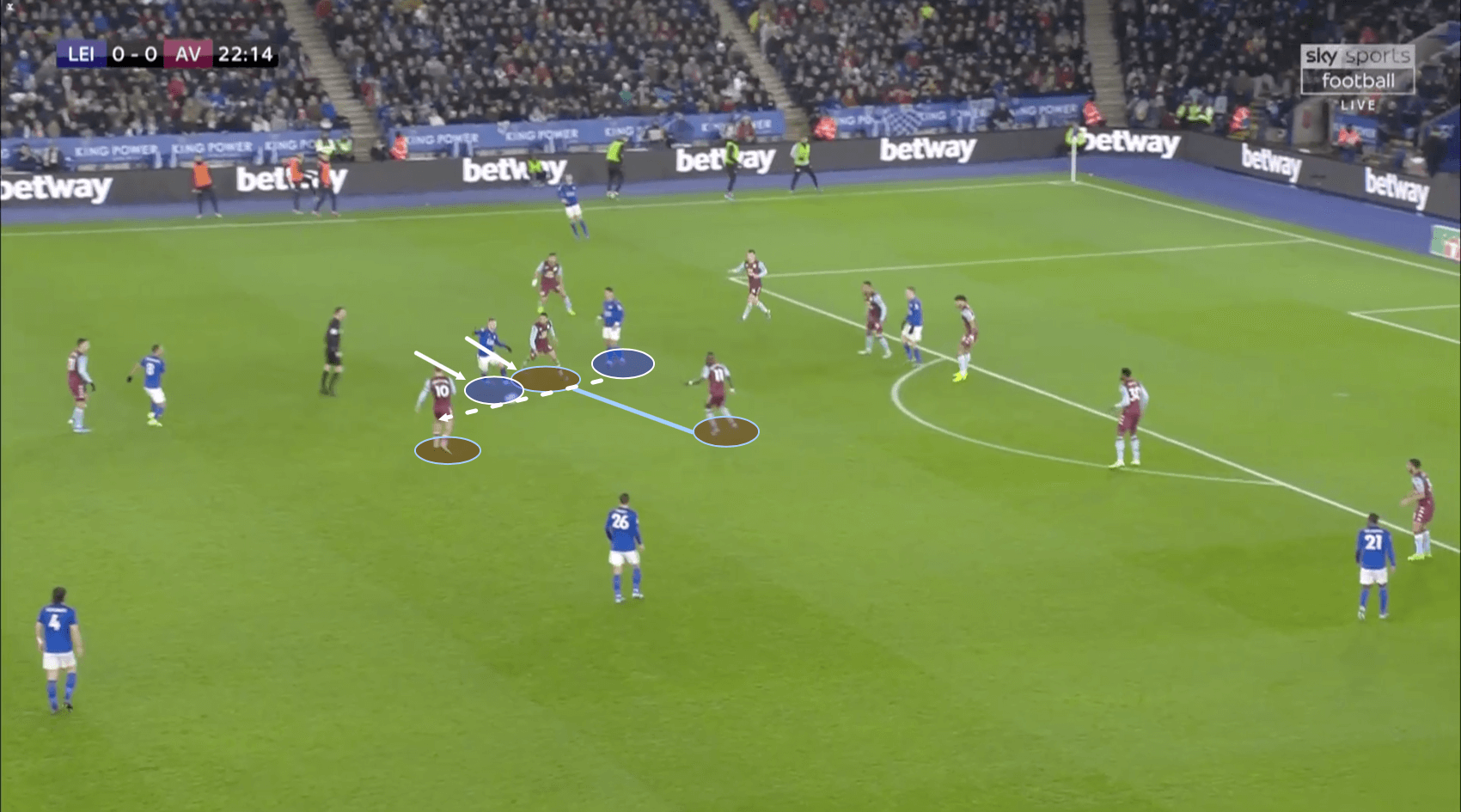 Above is an example of when Aston Villa’s defensive midfield halted a Leicester attack. Luiz was able to mark and track Maddison defensively, which forced Pèrez’s back-pass to misconnect and land at Grealish’s feet. This led to one of the very few Aston Villa attacks in the match.

Limiting Leicester’s attacks to the wide spaces led to predictability. Attacking through these areas in their specific configuration meant that the wing-backs Pereira and Chilwell pushed forward, well beyond the typical space occupied by a full-back. Dean Smith’s shrewd tactics understood this.

Aston Villa weren’t afraid to allow Leicester possession well into the defensive half. The high positioning of Leicester’s wing-backs forfeited space along the back line. 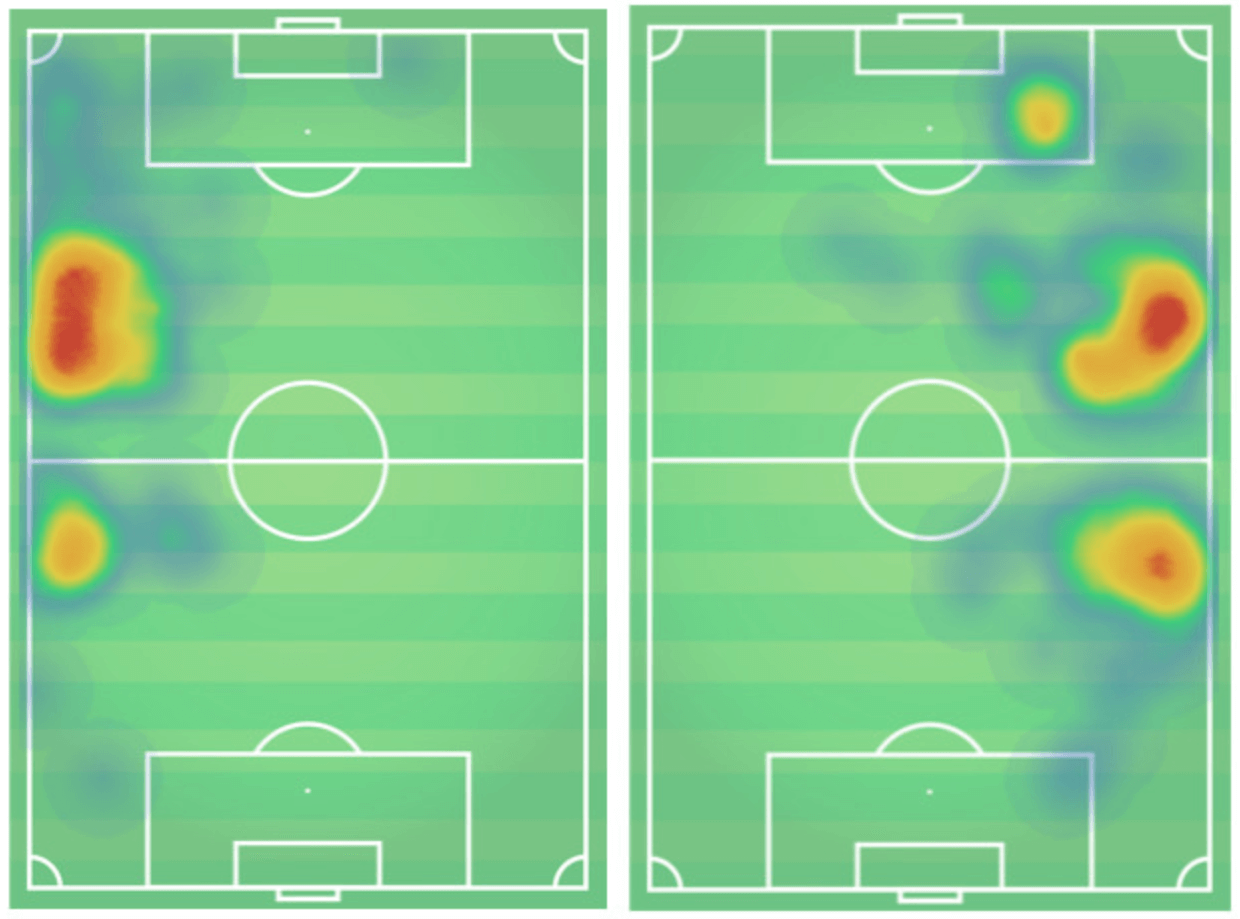 The heat maps shown here visualise how Chilwell on the left and Pereira on the right positioned themselves; mostly in the advanced areas. The wide areas in the defensive half, as a result, were open.

These spaces are where Aston Villa attempted attacks. Despite rarely maintaining possession, Grealish, El Ghazi, and Trézéguet utilised their overall time on the ball well, each tallying a key pass and the former two each creating a big chance (a situation in which the receiving player is reasonably expected to score). 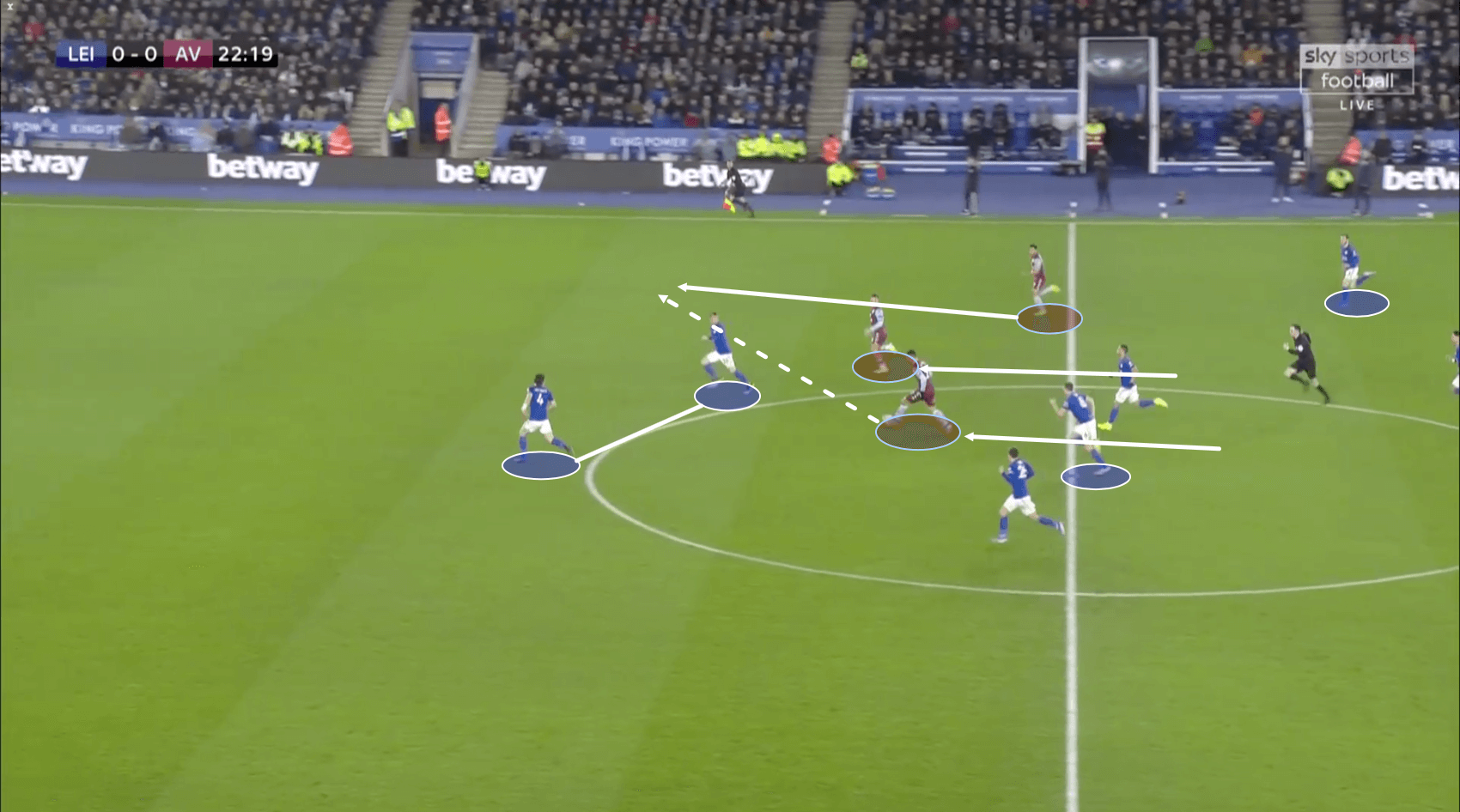 A mere five seconds after Aston Villa’s defensive action two figures ago, the front three surge forward in attack. El Ghazi dribbles past Evans who had missed a tackle at the centre circle. With Chilwell in an extremely advanced position, Trézéguet has open space ahead of him down the right touch line. El Ghazi completes the pass to the Egyptian and continues the attack. 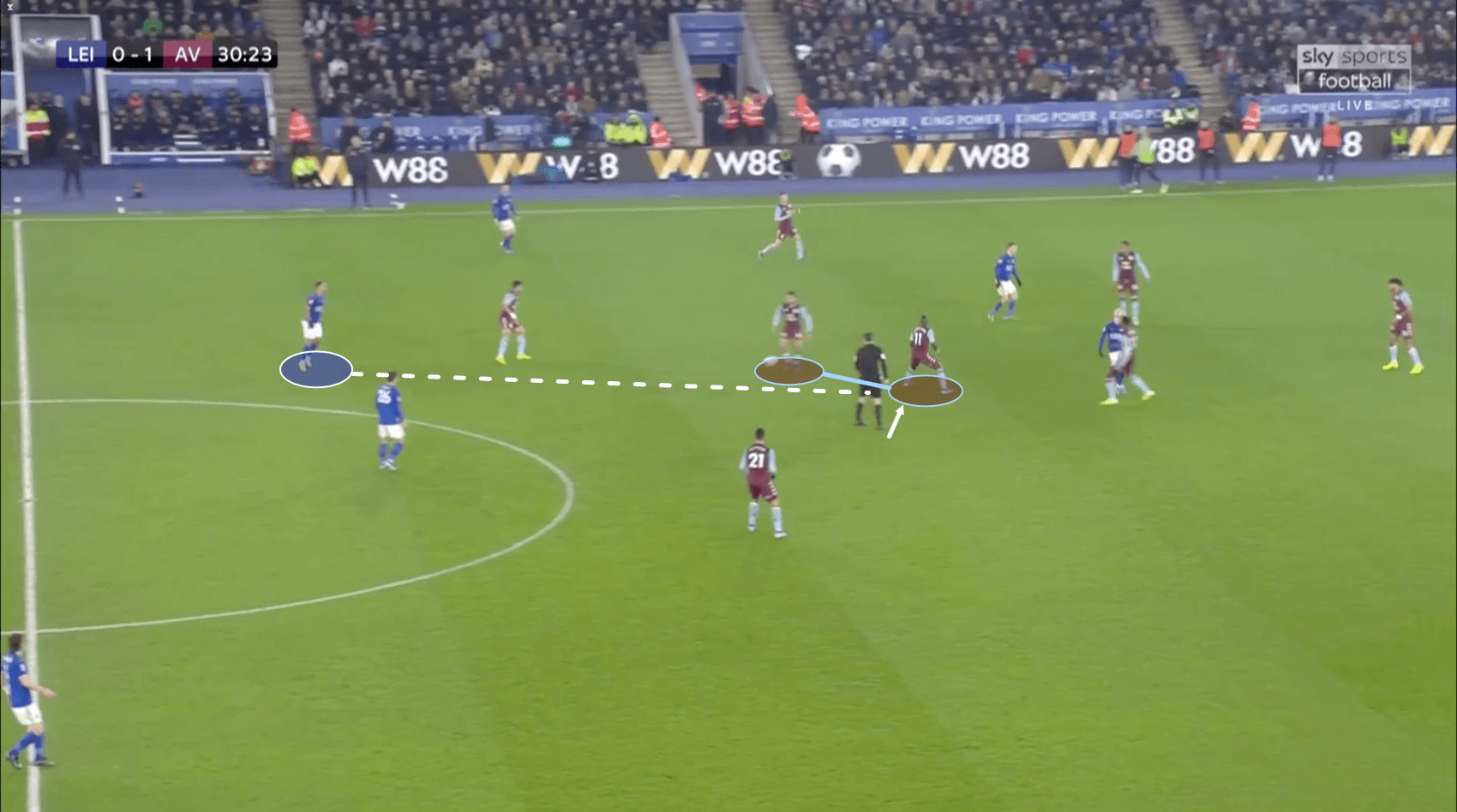 Again in this example we see Aston Villa’s midfield duo of Nakamba and Luiz in their defensive positions. Tielemans is allowed to turn on the ball and attempt a pass, but the through ball is blocked by Nakamba, and the ball lands to Luiz to initiate a counter-attack.

Seven seconds later and El Ghazi again has an easy passing option available thanks to a forward-playing opposing wing-back. Pereira’s positioning leaves Taylor with space to exploit down the left side of the pitch.

Eventually, this tactic resulted in the opening goal of the match favouring Aston Villa. 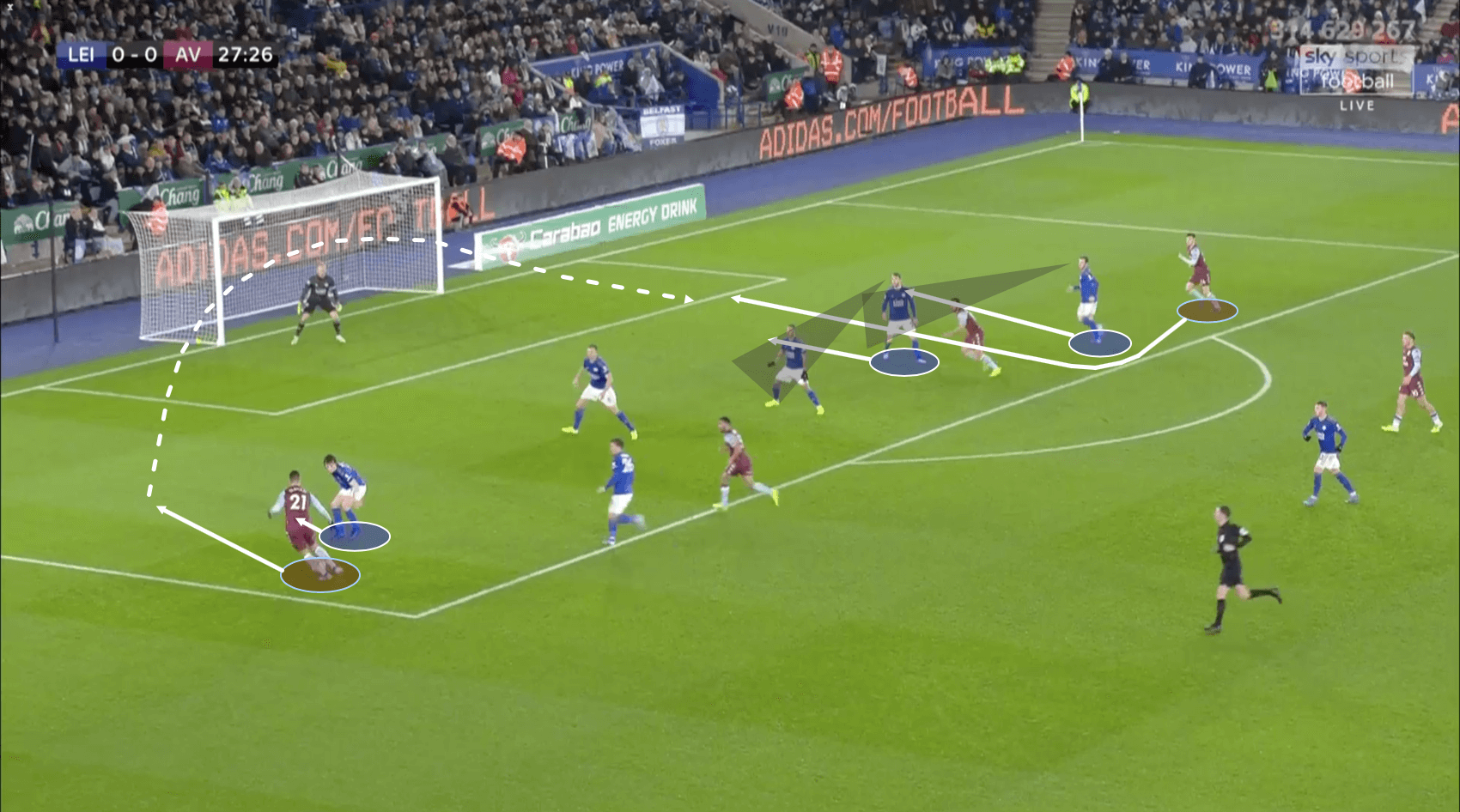 On the goal, El Ghazi controlled the ball down the left side. With Pereira out of the picture, the attacker used his quick movements to shift past the slower Söyüncü. Both Fuchs and Chilwell were caught ball-watching, and El Ghazi’s cross connected with Guilbert’s feet for an easy scoring opportunity.

Despite the goal allowed, Söyüncü performed as well as any centre-back could in a difficult situation defending so much space, ending numerous attacks in the defensive third and only being dribbled past once.

As stated, Aston Villa’s primary tactical setup was off-the-ball-minded. The back line was more often a back five than a back three, and structure was more often prioritised over pressure. Mings led the visitors in this aspect, completing 10 clearances, two blocked shots, and dribbled past zero times. 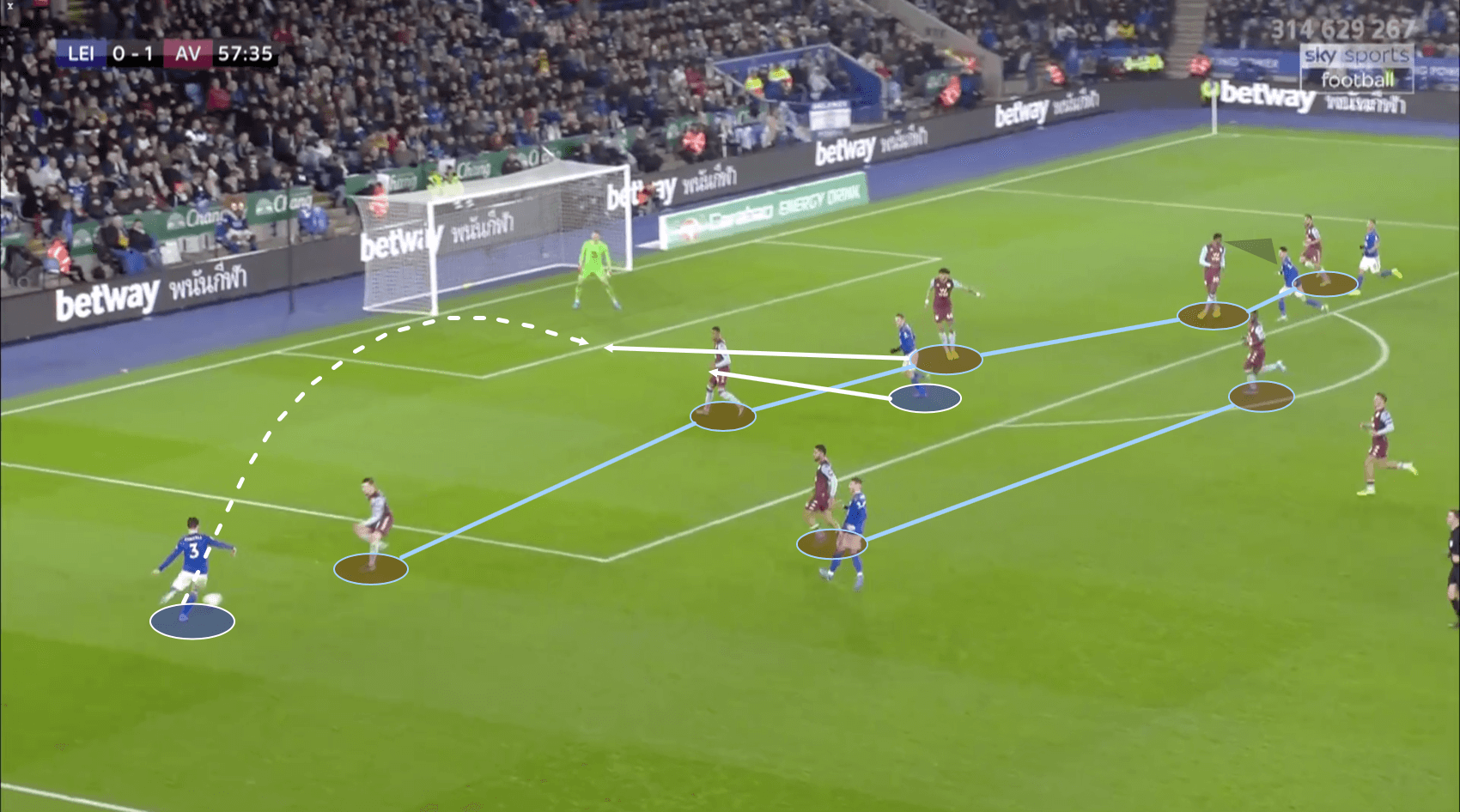 In possession down the left side, Chilwell crosses the ball into a dangerous area towards Vardy. Aston Villa’s defensive structure and organisation however, along with Mings’ leadership, led to a clearance of the cross.

After Aston Villa’s goal, Leicester actually began seeing even more possession. However, with this tactic failing to consistently create chances, Rodgers eventually adjusted his tactics and personnel in such a way to influence Aston Villa’s presence on the ball. The former Liverpool boss subbed off Praet at halftime for the more defensive-minded Hamza Choudhury. With the Leicester youth product more defensively apt than Praet, any three of the midfield were given a license to press forward more when out of possession. Additionally, the substitution of Pérez for the more direct-attacking Kelechi Iheanacho put more pressure on Aston Villa’s back line. This pressure ultimately led to Leicester’s equaliser. 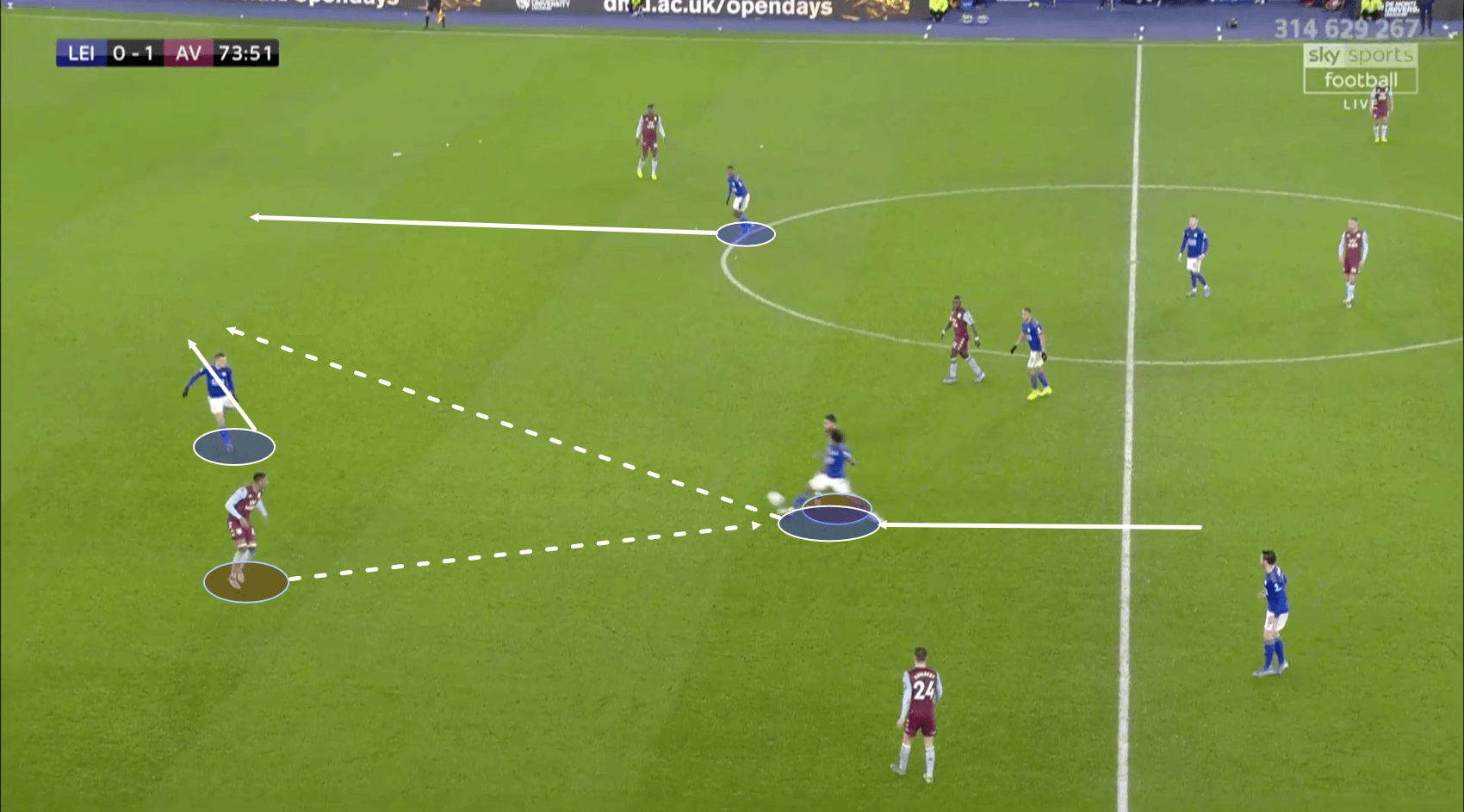 With just over 15 minutes remaining, Aston Villa had possession high in their own half. Konsa passed forward to Luiz, but Choudhury pressed the pass and deflected it centrally. The high positioning of Aston Villa’s possession left Vardy and Iheanacho with plenty of space around the final third, and the Nigerian smashed in his third goal in three League Cup matches this season. Leicester continue to succeed on counter-attacking and transition attacks, having scored the most goals from such situation in the Premier League this season with six.

Heading into the match, much of the hype surrounding it involved the central attacking midfielders Maddison and Grealish. The two technical number 10s both lead their teams in key passes this Premier League season, with 49 and 52 respectively, good for fifth and fourth-most in the English top flight. They also have suffered 61 and 88 fouls respectively, third and most in the league. In this match, both succeeded in similar movements despite starting in different positions. Maddison aided in the wide ball progressions of Leicester and eventually created chances in the final third, while Grealish dropped inside to receive the ball in quick buildups and connected with the other attacking players on counter-attacks. Both players will continue to lead their clubs as the creative talismans for the remainder of the season.

Statistically, Leicester dominated the match across a number of facets, not only in possession, but also in shots (21 to three) shots on target (six to one), corner kicks (11 to one), and accurate passes (612 to 214). But football is a sport in which one chance can affect the result directly, and this match is a prime example of such a game. Exhibiting an expected goal difference of only 0.1 between the two sides, the analysis using advanced statistics show Aston Villa took advantage of the few opportunities available to them. Both clubs will be heading into Villa Park for the second leg with the very realistic plan of advancing to the League Cup Final.