At the beginning of the past decade, Bayern and Dortmund revived their rivalry and took it to new highs. Mainly, this was caused by Dortmund’s rise under Jürgen Klopp, who build a team that beat Bayern five times in a row in 2011 and 2012. While the UEFA Champions League final of 2013 surely marks the highpoint of the rivalry (with Bayern coming out on top), this DFB Pokal semi-final clash from 2015 stands out as it is Klopp’s final clash against Bayern as Dortmund coach. Advancing to the final after winning the penalty shootout, in the Allianz Arena against Pep Guardiola’s Bayern, surely will be remembered as a truly beautiful end to the Klopp era in Dortmund.

In this tactical analysis, we will show how Klopp managed to neutralise Guardiola’s tactics and advance to the final. 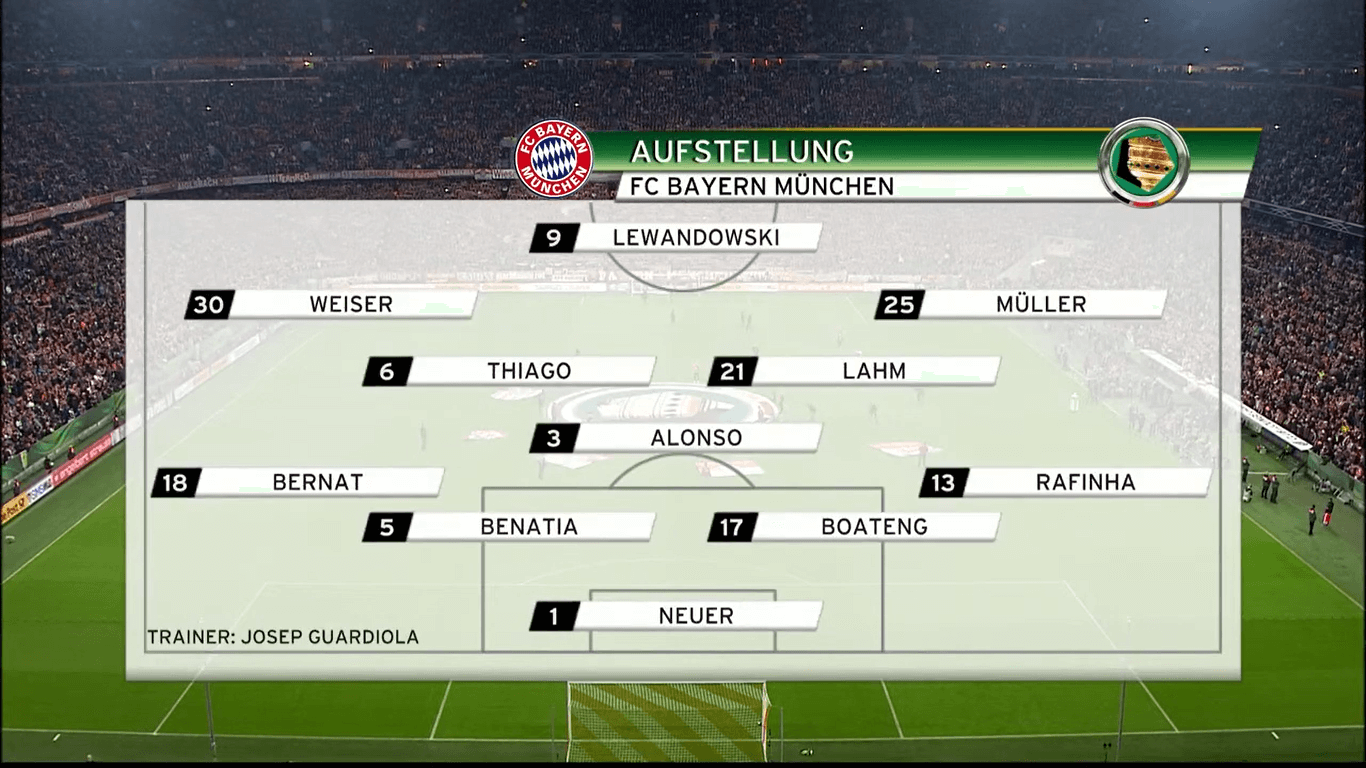 As can be seen in the image above, the official line-up given to us was a 4-3-3 formation by Bayern. However, as we will show later on, Guardiola’s team lined-up differently in what resembled a 3-5-2. From Bayern’s point of view, the injuries of Franck Ribéry, Arjen Robben and Xherdan Shaqiri were problematic and prevented Bayern from utilising their great wing game. Robben was even substituted in for Thiago Alcántara in the 68th minute of the game, coming back from an injury, but after only 15 minutes, he had to be replaced by Mario Götze, as he was not ready for this game from a health standpoint.

Another interesting move by Guardiola is the positioning of Philipp Lahm, who is known for being of the best fullbacks of his time. Pep put him into the midfield next to Xabi Alonso and Thiago to dominate the midfield. 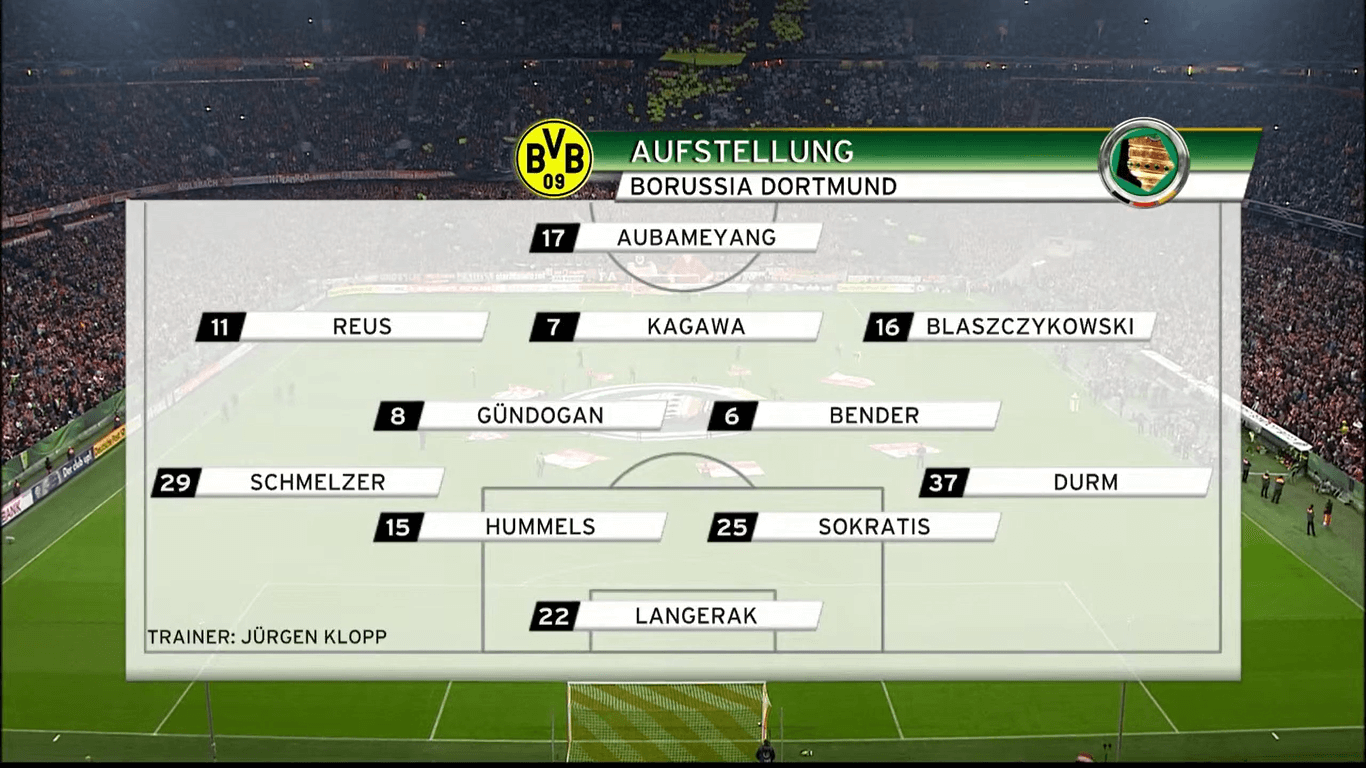 Dortmund, on the other hand, played with their top eleven in a 4-2-3-1. However, Klopp’s team was somewhat fluid with Jakub Blaszczykowski moving into the centre occasionally meaning a 4-3-3 like structure emerged.

Unsurprisingly, Bayern controlled the ball. As mentioned above, the Bavarian side played with a back three. 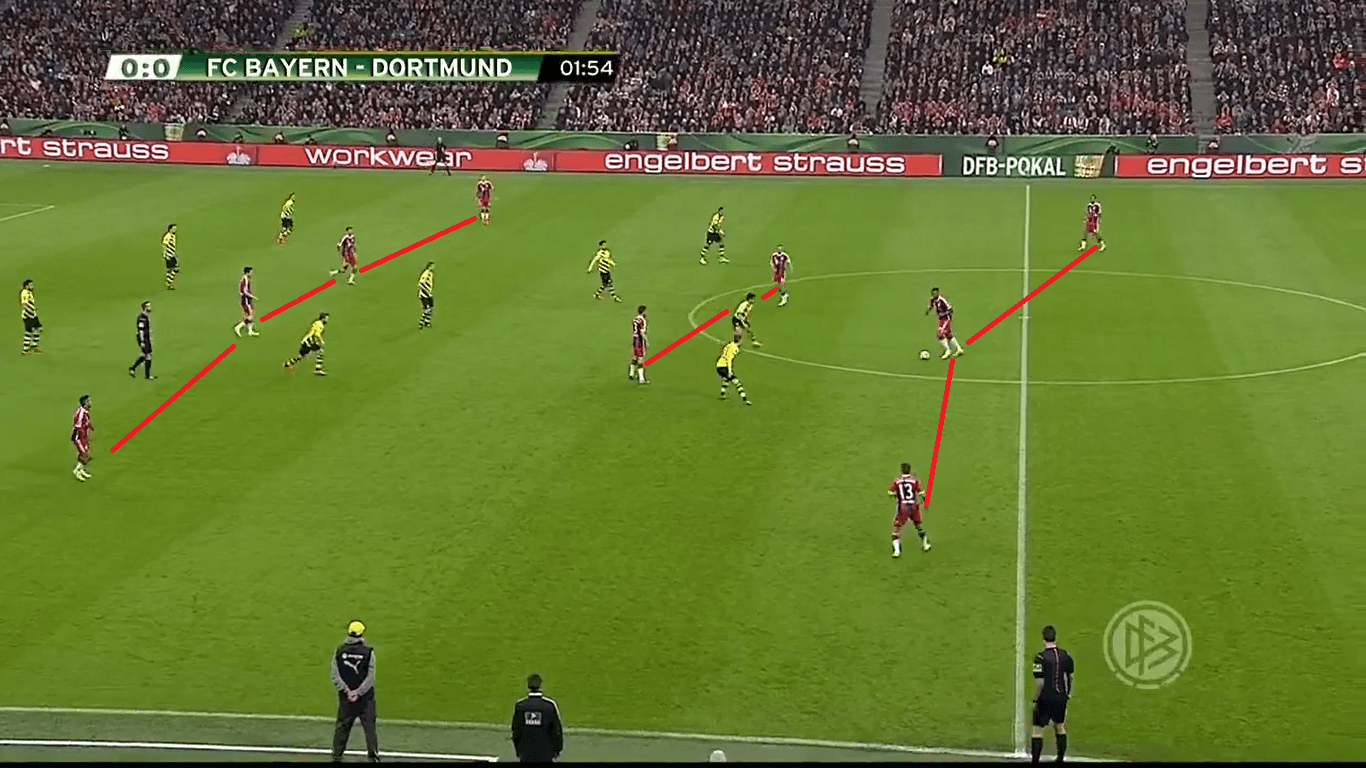 Rafinha was the left centre-back, while Jérôme Boateng played centrally and Medhi Benatia occupied the right centre-back position. The wing-backs Mitchell Weiser and Juan Bernat (not seen in the image) pushed extremely high, while Thiago and Thomas Müller also positioned high next to Robert Lewandowski.

From Dortmund’s point of view, the tight and central oriented defending stands out. The first attacking line always focussed on closing down Xabi Alonso, the wings were abandoned. 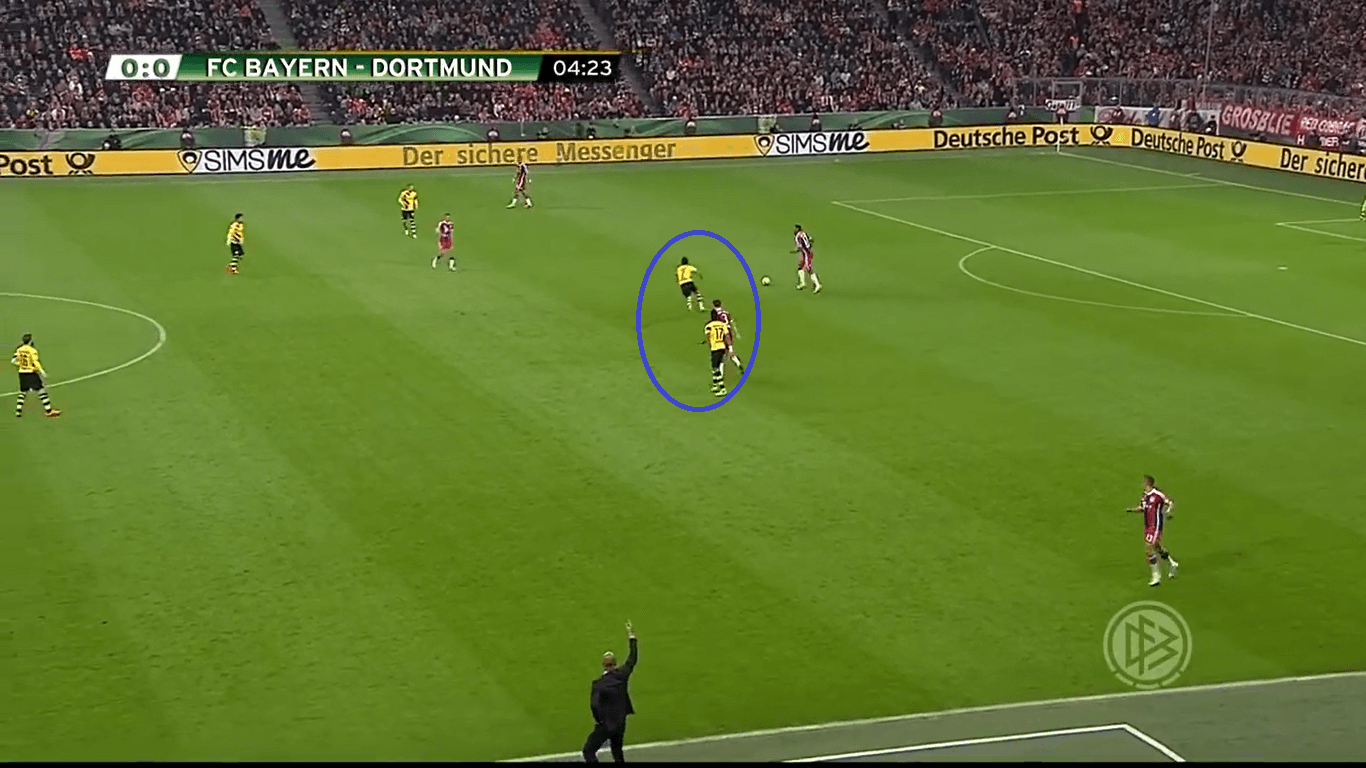 Especially in the image above, this approach can be seen clearly. Pierre-Emerick Aubameyang marks Alonso closely, while Shinji Kagawa keeps him in his cover shadow. Blaszczykowski concentrates on the centre, the wings are abandoned. 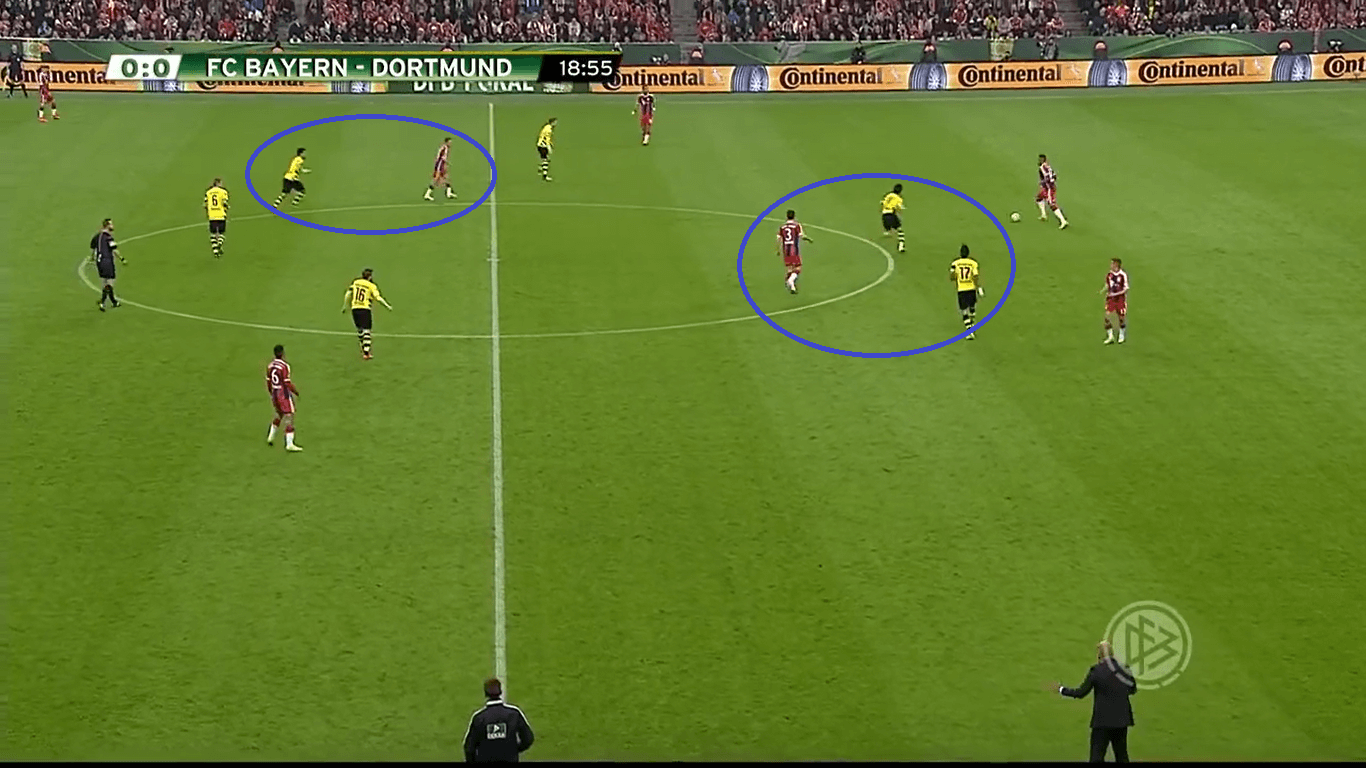 However, Bayern insisted on starting the attack from the centre. Again, Kagawa and Aubameyang prevent the pass to Alonso. Bayern’s solution to this problem was to play with Lahm. The staggered positioning of Lahm and Alonso created a triangle which meant in theory, Lahm could lay the pass off from Boateng to Alonso. This would be even more advantageous than playing the ball directly to Alonso. Normally, he would have to turn, but with a layoff, he has perfect sight and can directly find the best continuation. Unfortunately for Bayern, Ilkay Gündogan and Marco Reus were aware of this and anticipated passes to Lahm. 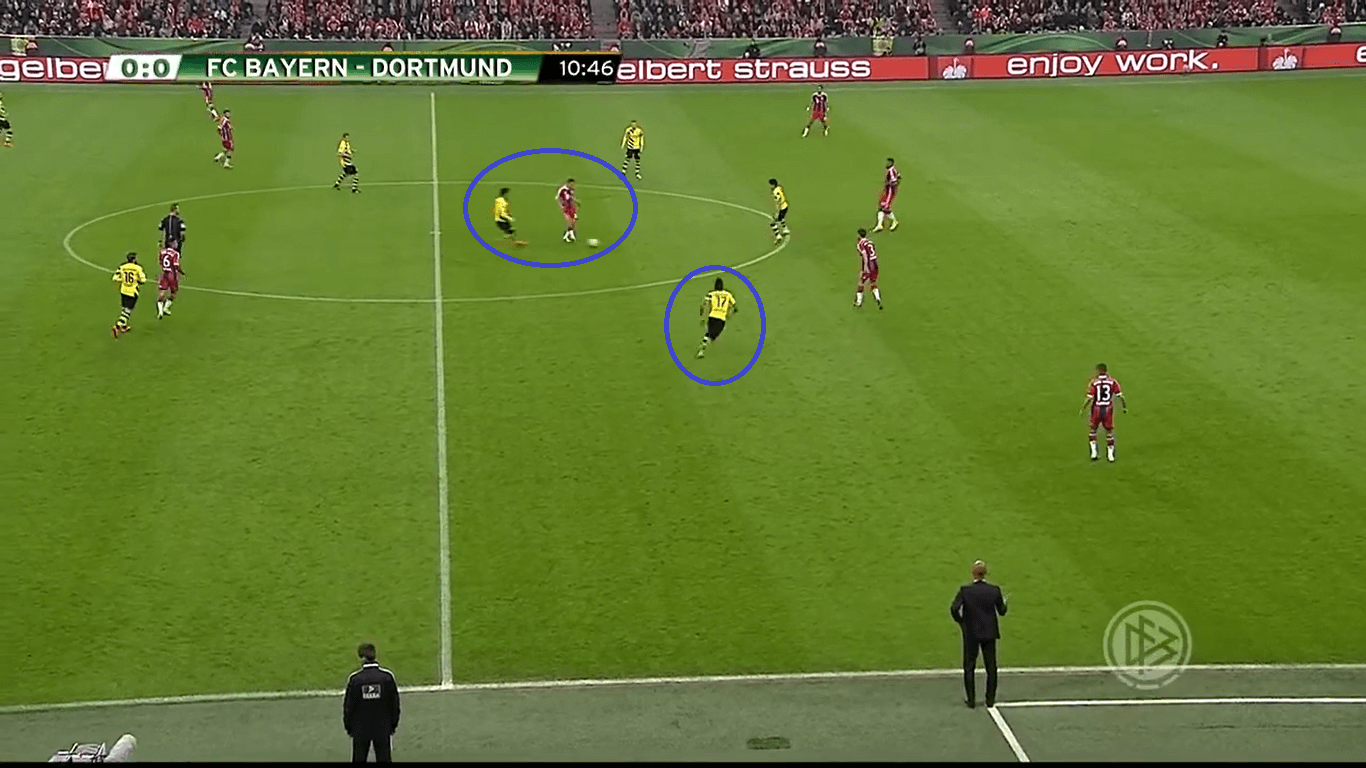 In some instances, when Dortmund could not prevent the initial lay off by Lahm, they were nonetheless able to press Alonso, as Aubameyang does in the image above. Dortmund were incredibly concentrated and neutralised this approach completely, shutting down Bayern’s centre.

From time to time, Alonso fell back to create a back-four, but being so deep in the own half, it became difficult to progress the ball. 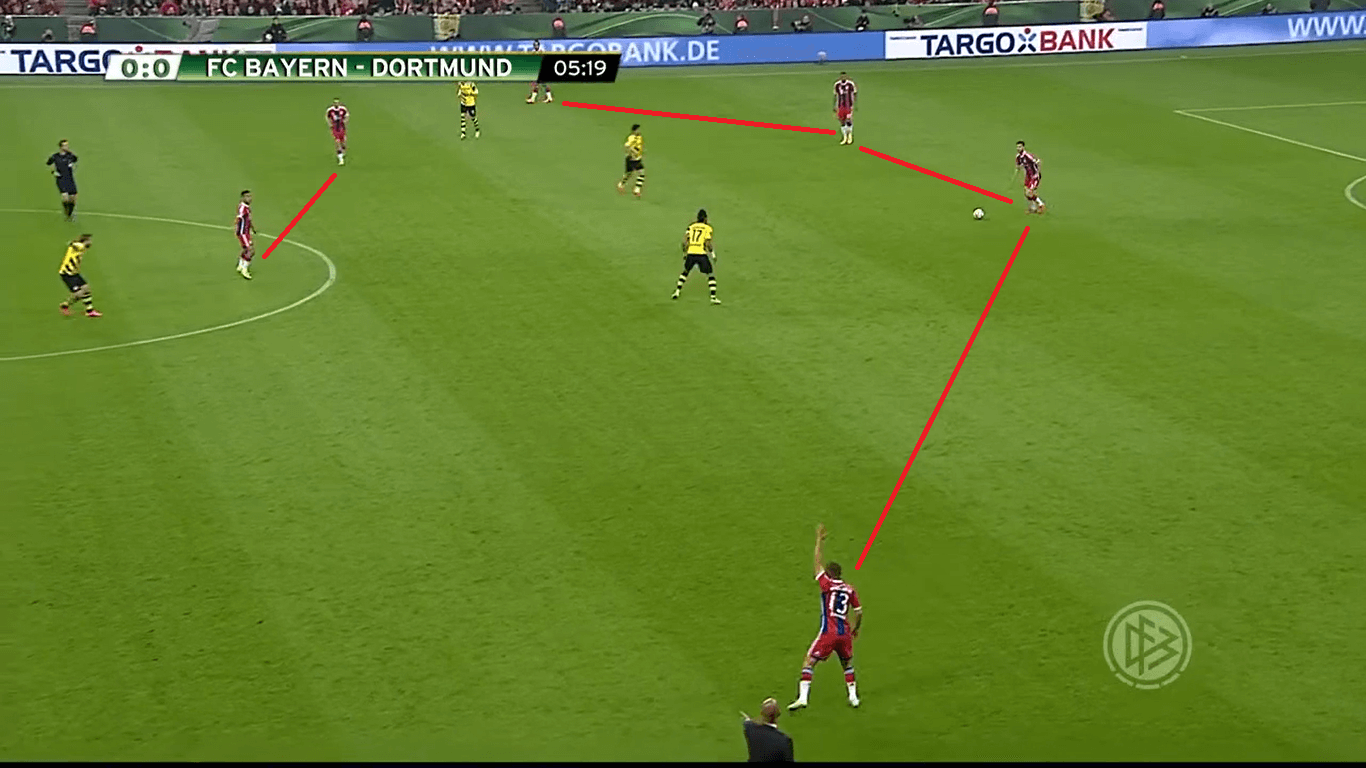 Dortmund get no control

While Bayern found no way to progress the ball, Dortmund had problems controlling it for more than a few seconds as Bayern pressed intensely. 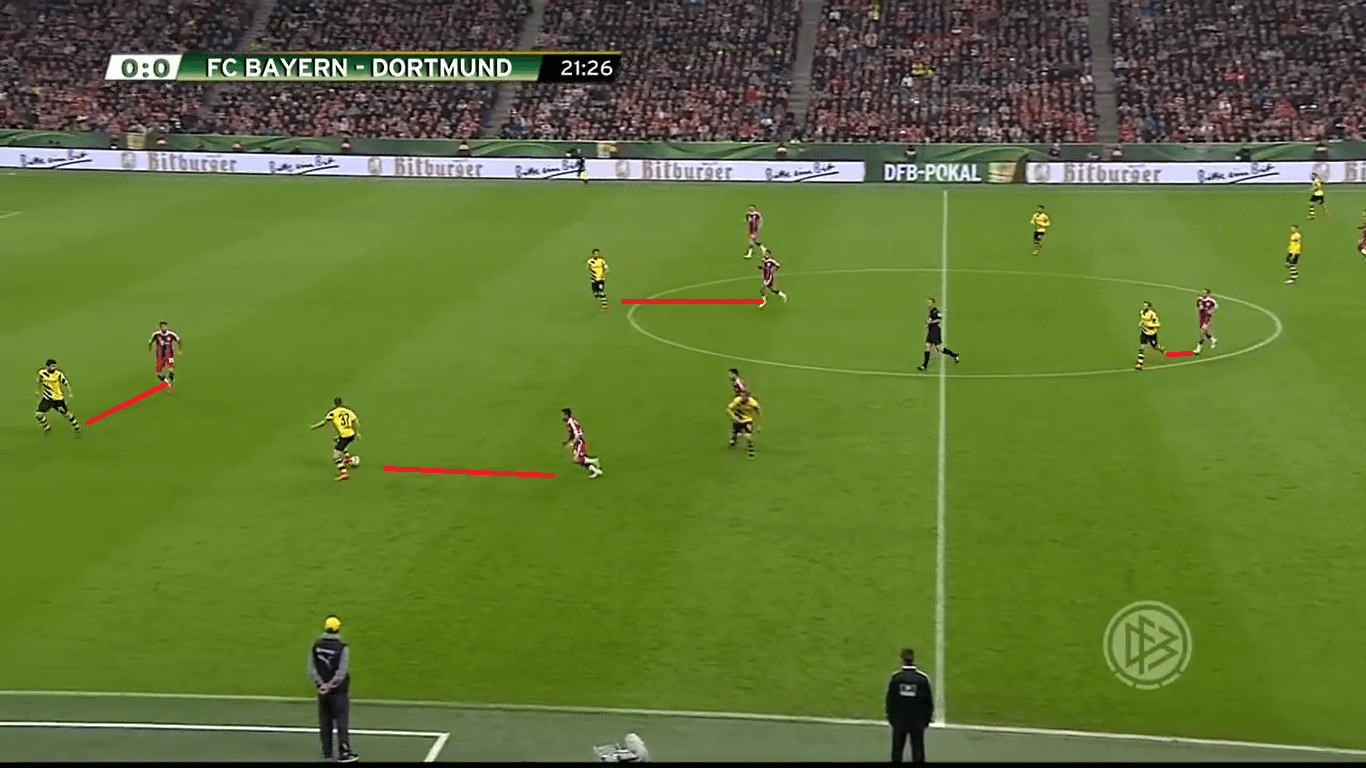 Above, Erik Durm has the ball. As there was no passing option up-front, he turned back in order to rebuild the attack through the centre-backs. Juan Bernat moderately presses him. There is no passing option though for Durm, not even backwards. Sokratis is marked tightly, while the passing lane to goalkeeper Mitch Langerak is also closed. Mats Hummels, Dortmund’s go-to-guy in the build-up, is also marked tightly by Thiago. 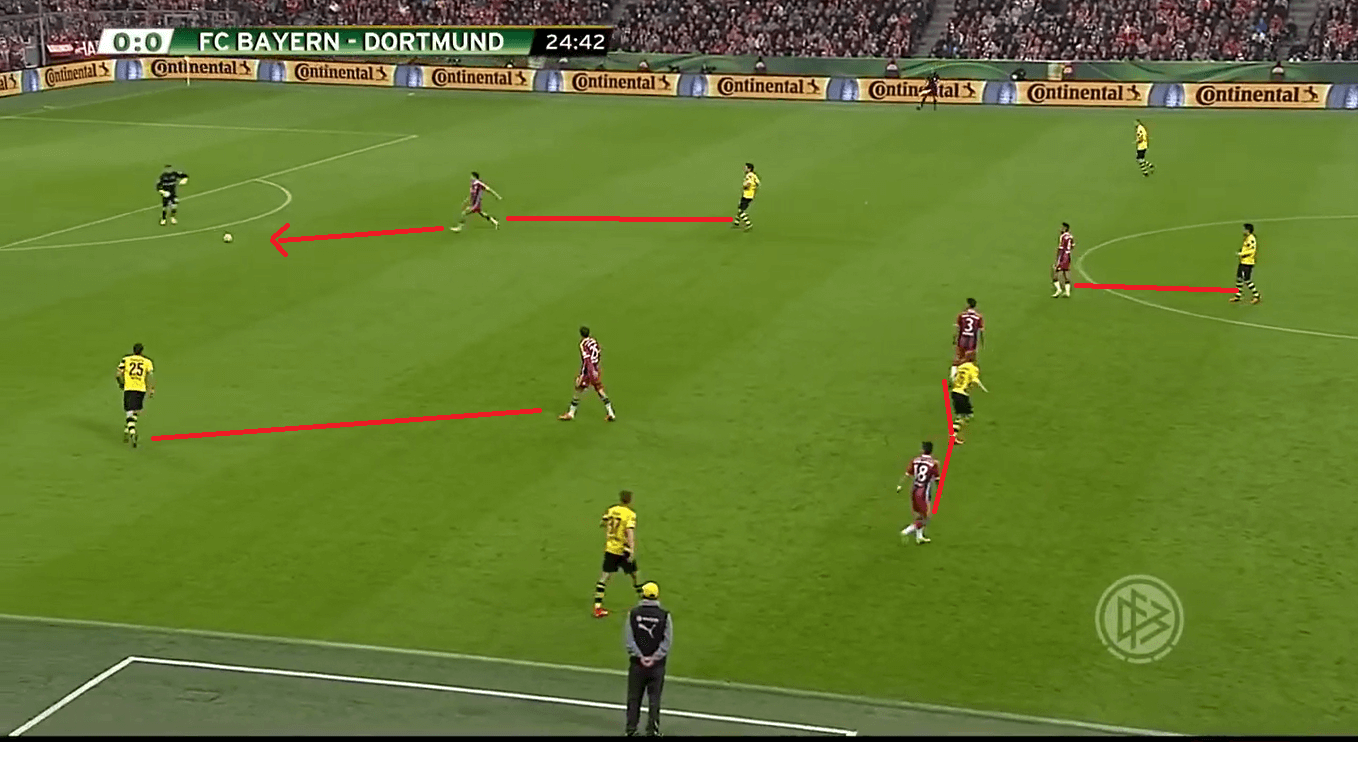 Again, in the image above, we have a situation where Dortmund have no passing option. Bayern’s aggressive man-to-man approach forces keeper Langerak to play it long.

Even when Bayern were not applying that much pressure, Dortmund did not have many passing options. 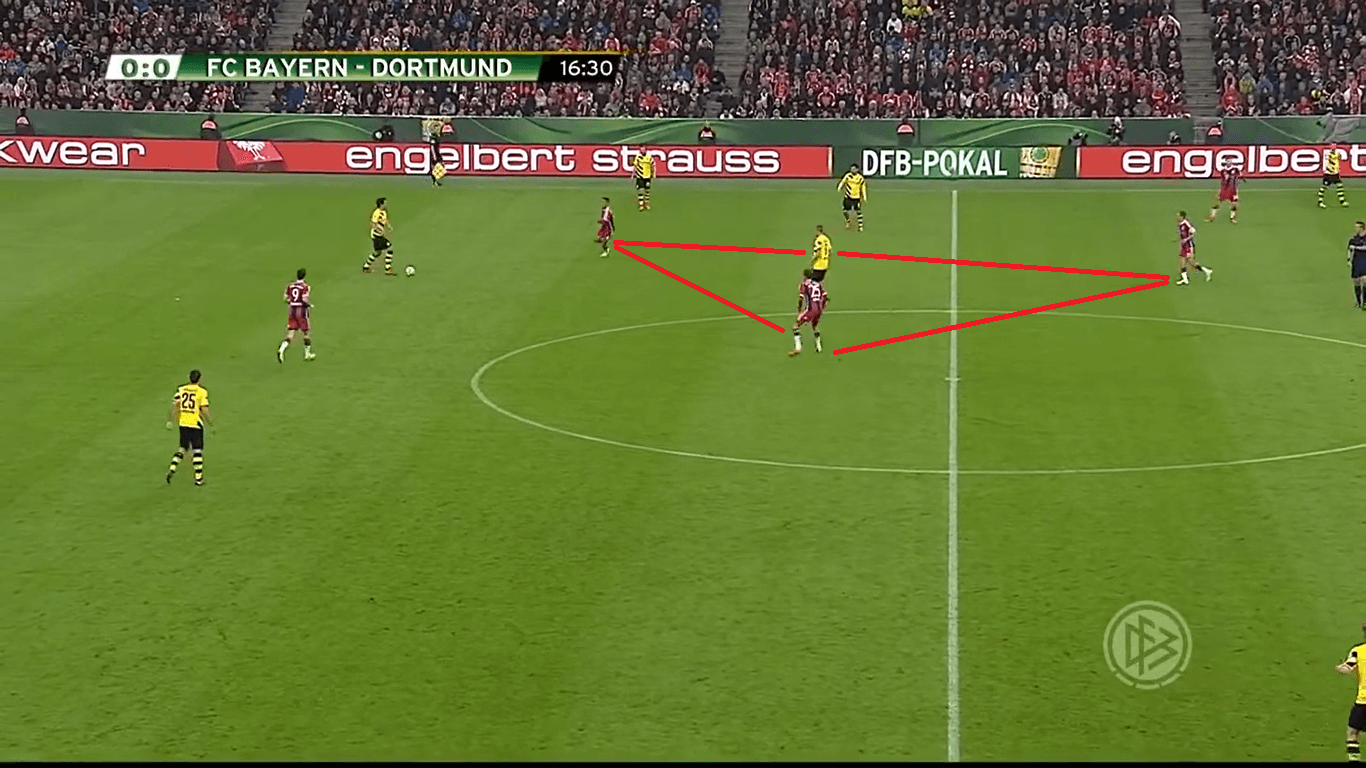 Above, Hummels has the ball, but there is no central passing option. Lewandowski cuts off Sokratis, while Thiago, Lahm and Müller form a triangle and prevent the pass to Sven Bender. Dortmund only had the option to play it to the left, but then Bayern would shift over and apply huge pressure to gain possession. 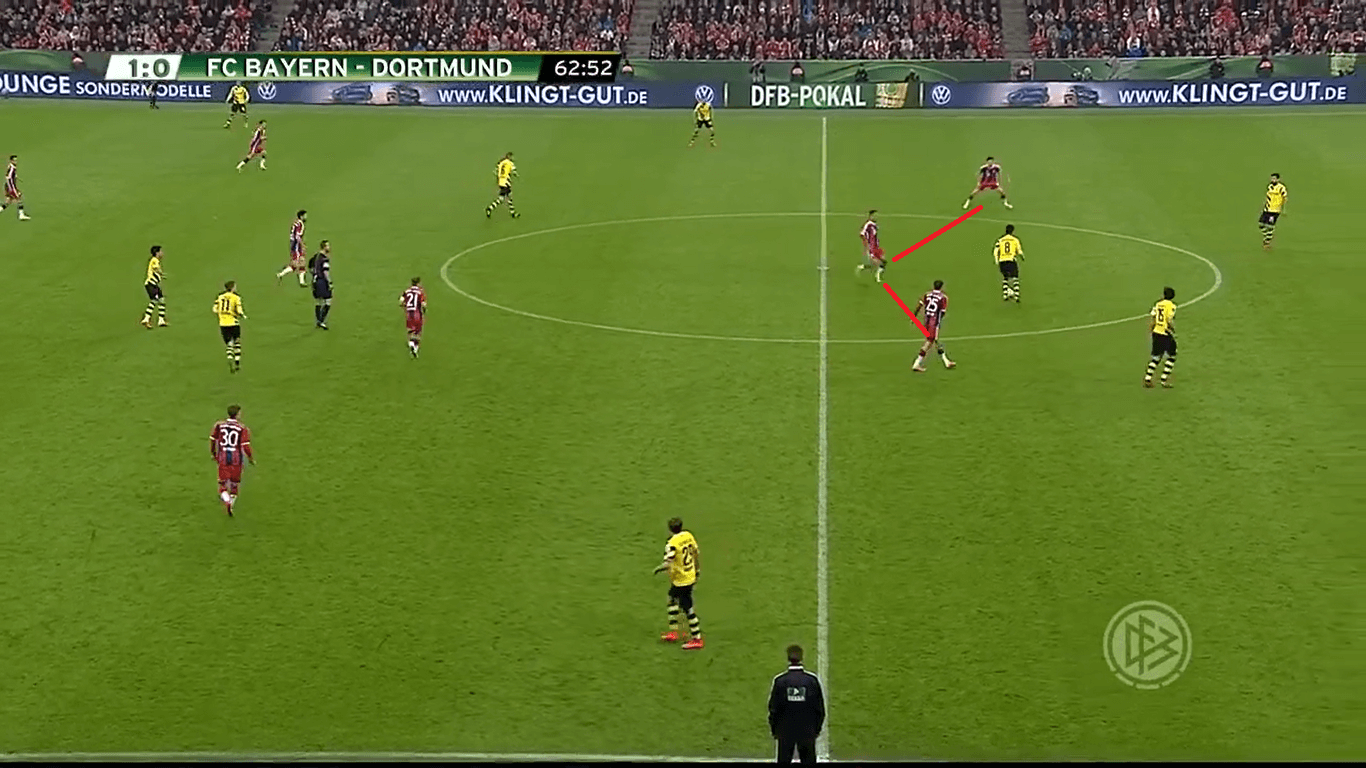 Similarly, Bayern forms a triangle here to oppose Gündogan. In this case, they are not executing it perfectly though, as the passing lane to Bender is open.

Transition game the key for both teams

As both teams could not make progress with their possession game, the transition from defence to offence was even more important.

For Bayern, it was important to stretch Dortmund’s backline, so Weiser and Bernat stayed near the touchline, even when counterattacking. 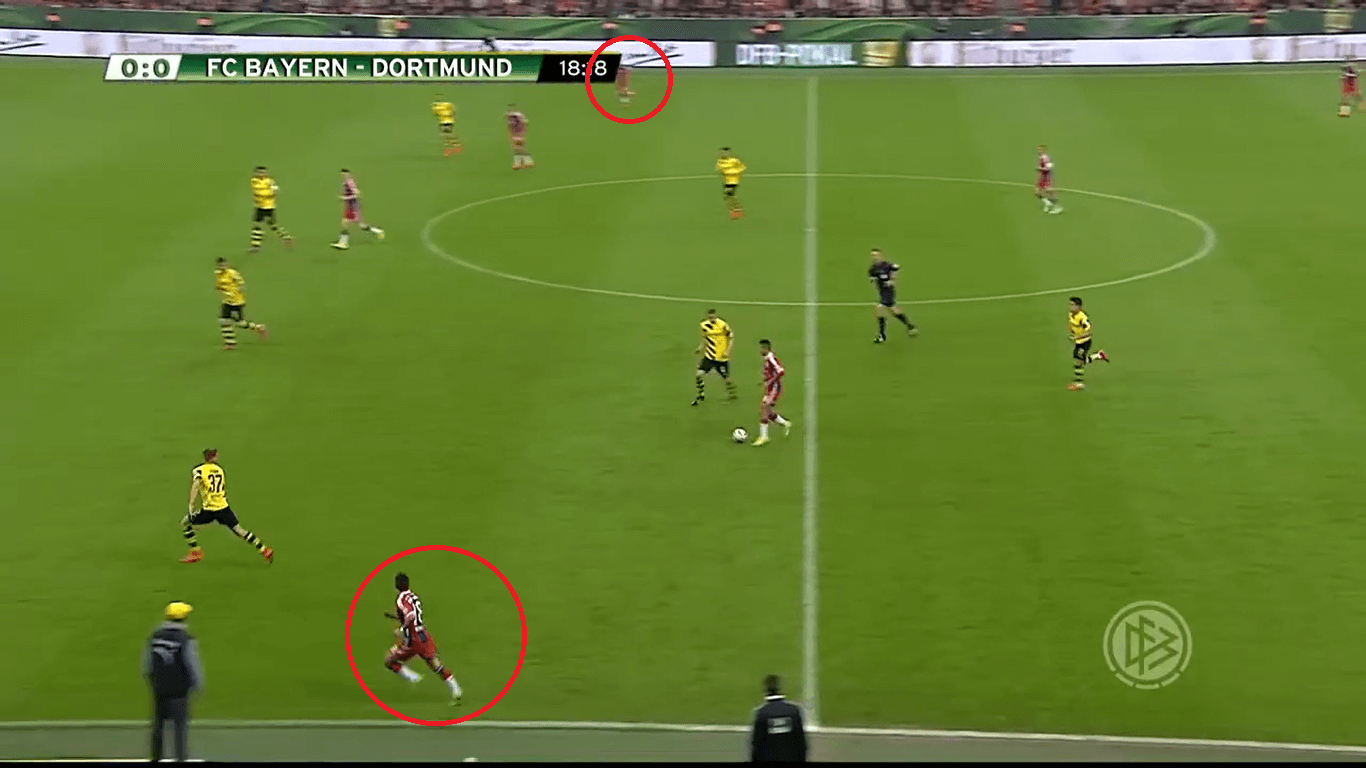 There was no immediate danger for Dortmund though, as both wingbacks could rarely break through.

Nonetheless, in theory, this should have created more dangerous situations, as it helped to stretch Dortmund’s backline and create holes, but strangely Bayern were not able to take advantage of this. 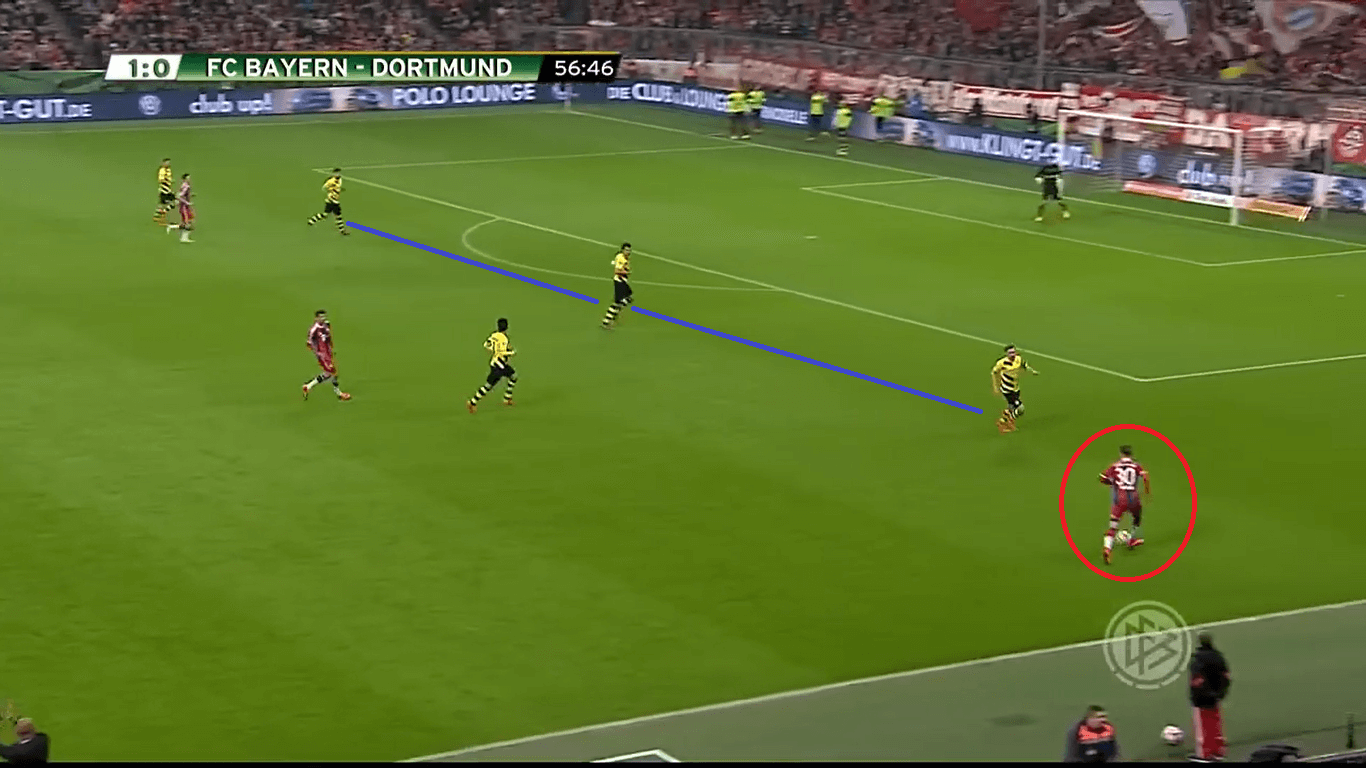 The one time Bayern took advantage was when they were able to score the opening goal. Benatia intercepted a bad pass by Kagawa and played a long diagonal pass to Lewandowski who finished clinically, see below. 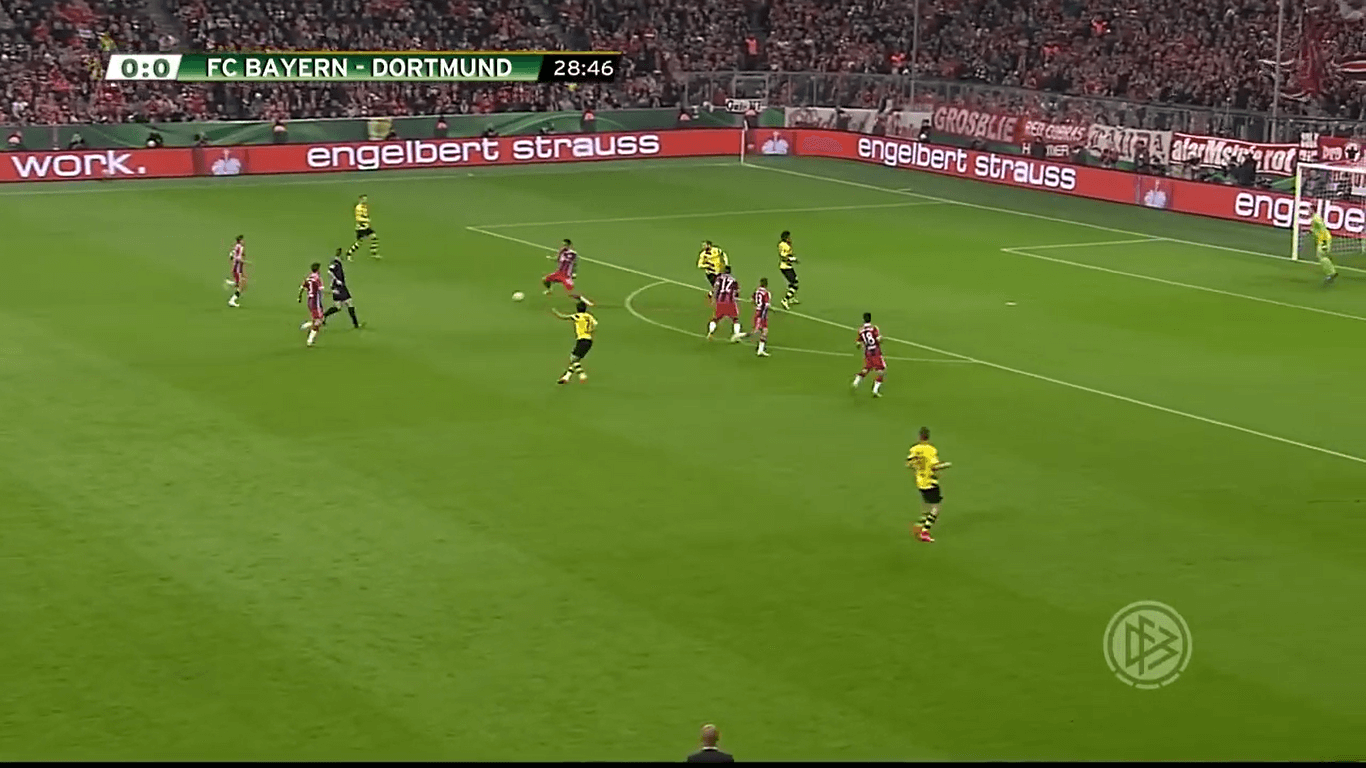 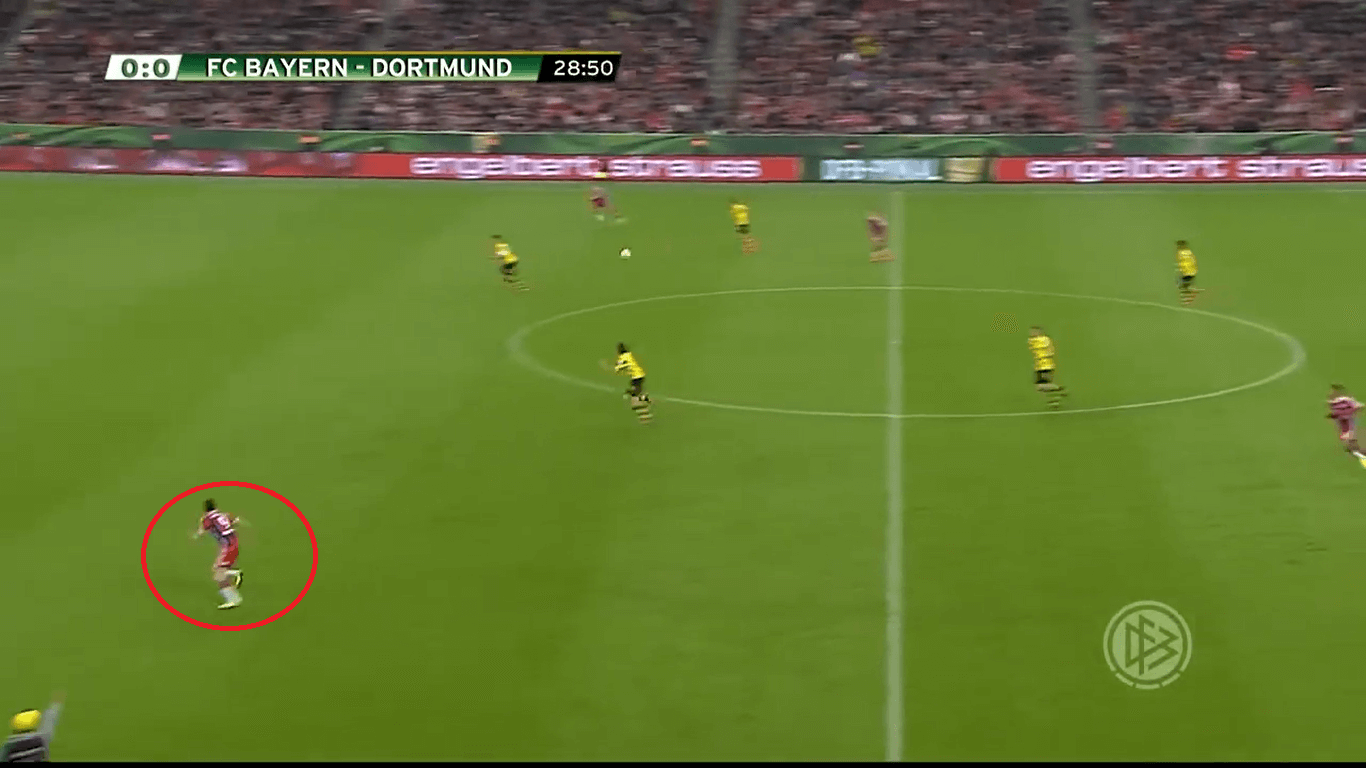 Dortmund, on the other hand, tried to find Kagawa between the lines when counterattacking, as the Japanese could then attack the backline at speed. 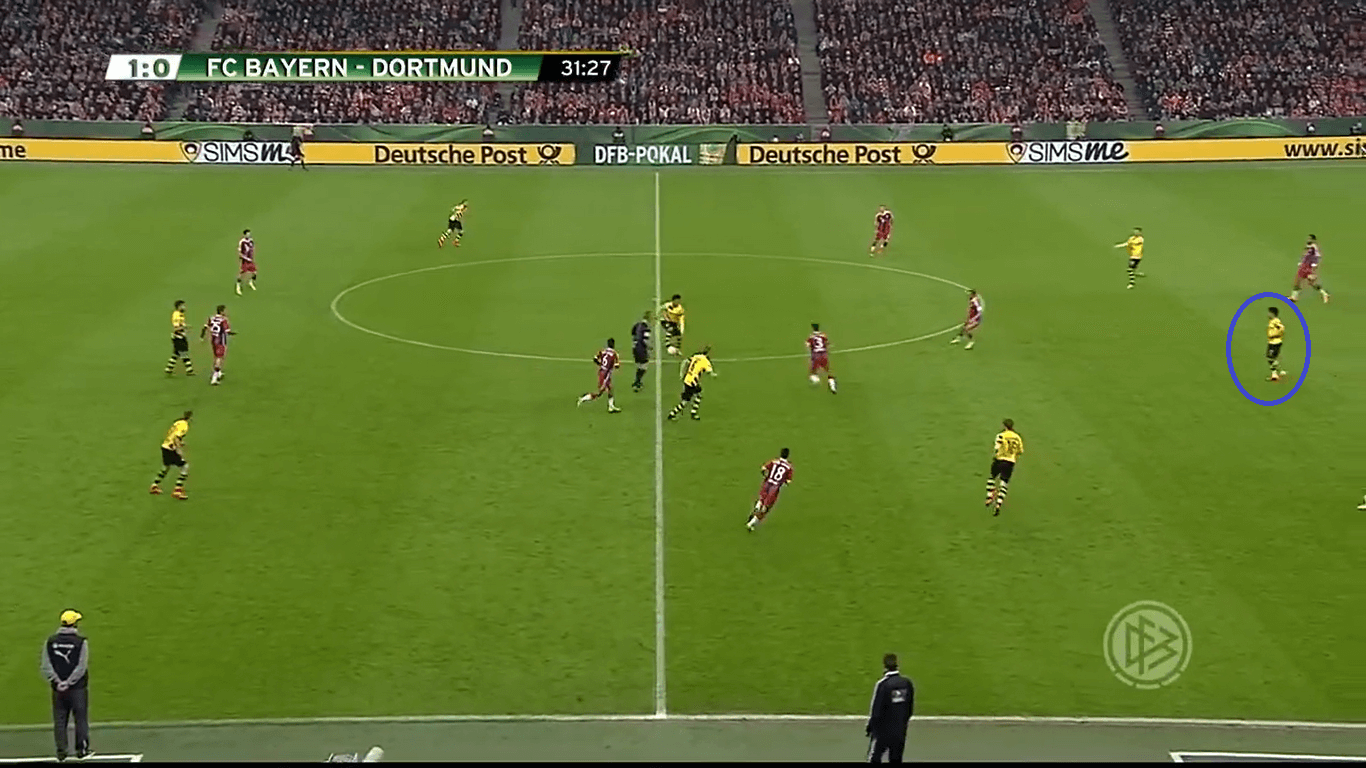 Here, Gündogan gains possession. Alonso presses him too late, while Lahm does not fall back in time to prevent the pass to Kagawa. Reus, on the same line as Kagawa, is also wide open and serves as an additional passing option. Guardiola was furious on the touchline when the pass to Kagawa went through, which implies that this is something they had prepared for, but could not prevent. 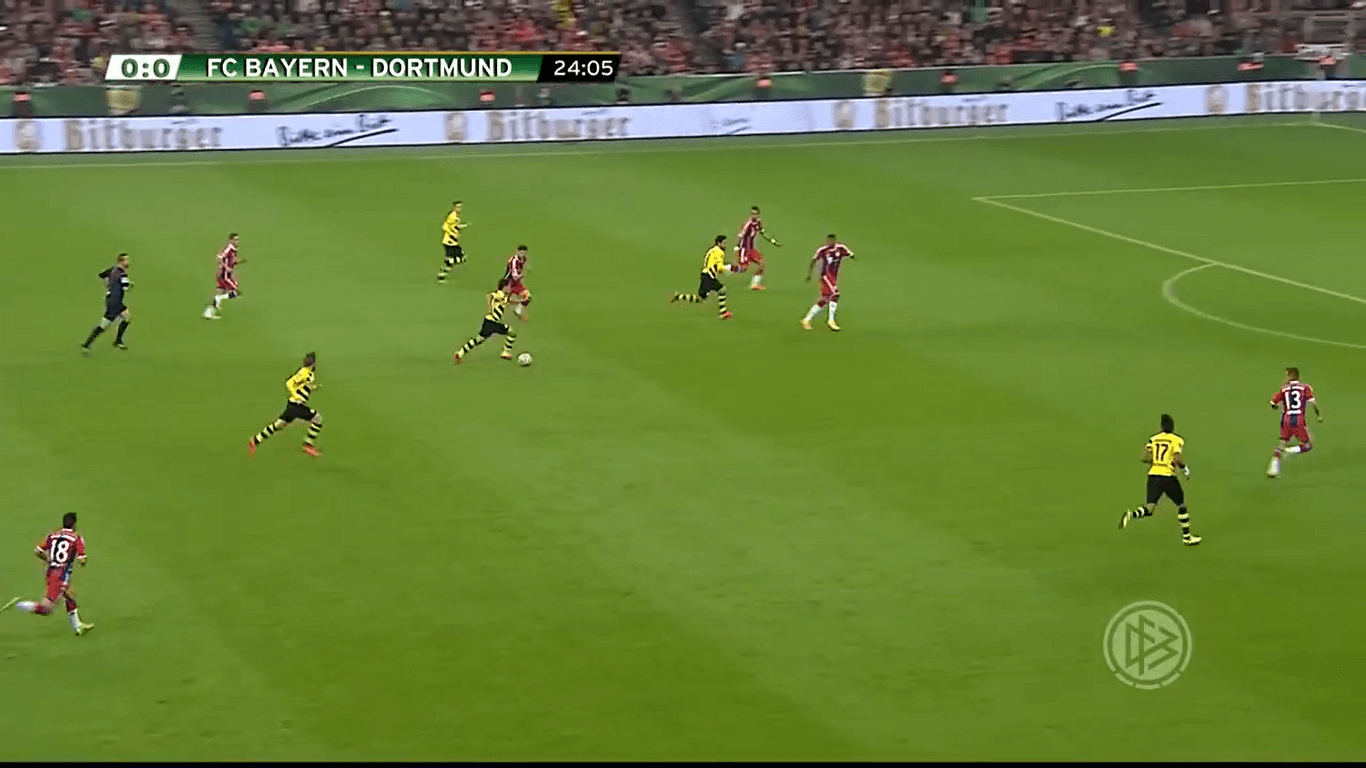 Situations like the above one with Kagawa dribbling through the midfield are especially dangerous, as Bayern’s Alonso did not have the speed to follow Kagawa. Also, the back three is quite vulnerable since Reus and Aubameyang also stretch the backline.

Dortmund’s equalizer occurred when Aubameyang made a run into the space behind Rafinha. 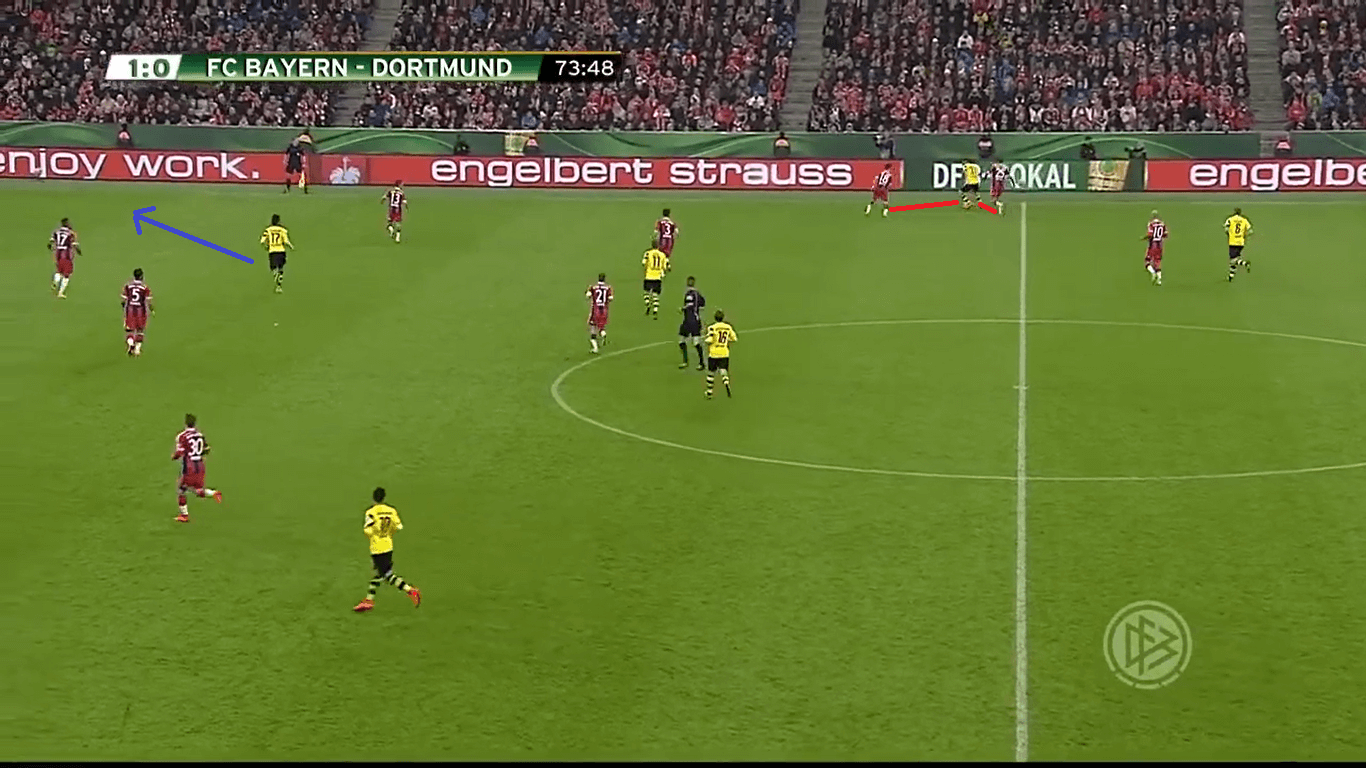 Bayern had everything under control, but Durm hit the ball down the line when he was pressured by Müller and Bernat. Aubameyang reacted quickest, and all of a sudden Bayern were not able to react to this, see above. 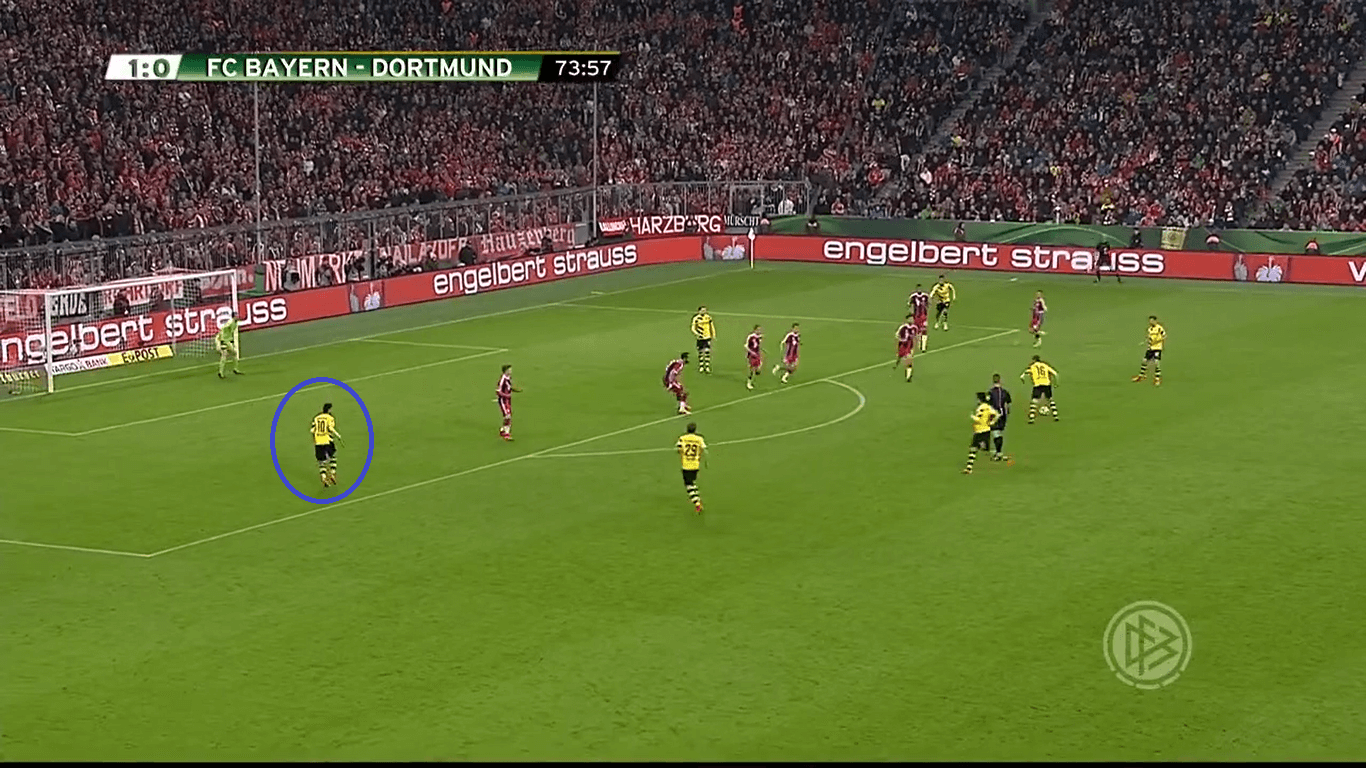 Above, when Aubameyang passed it back to Blaszczykowski, Bayern still had not recovered and were not organized as they should have been. Henrik Mkhitaryan, who replaced Kagawa, was open in the box. He crossed it then again to Aubameyang, who scored the goal.

Overtime does not bring any decider

In the following, Bayern seemed somewhat shocked. With Thiago being substituted, it also appeared as if Bayern were losing some of their dominance. During overtime, they tried to score the winning goal, but Dortmund defended cleverly. 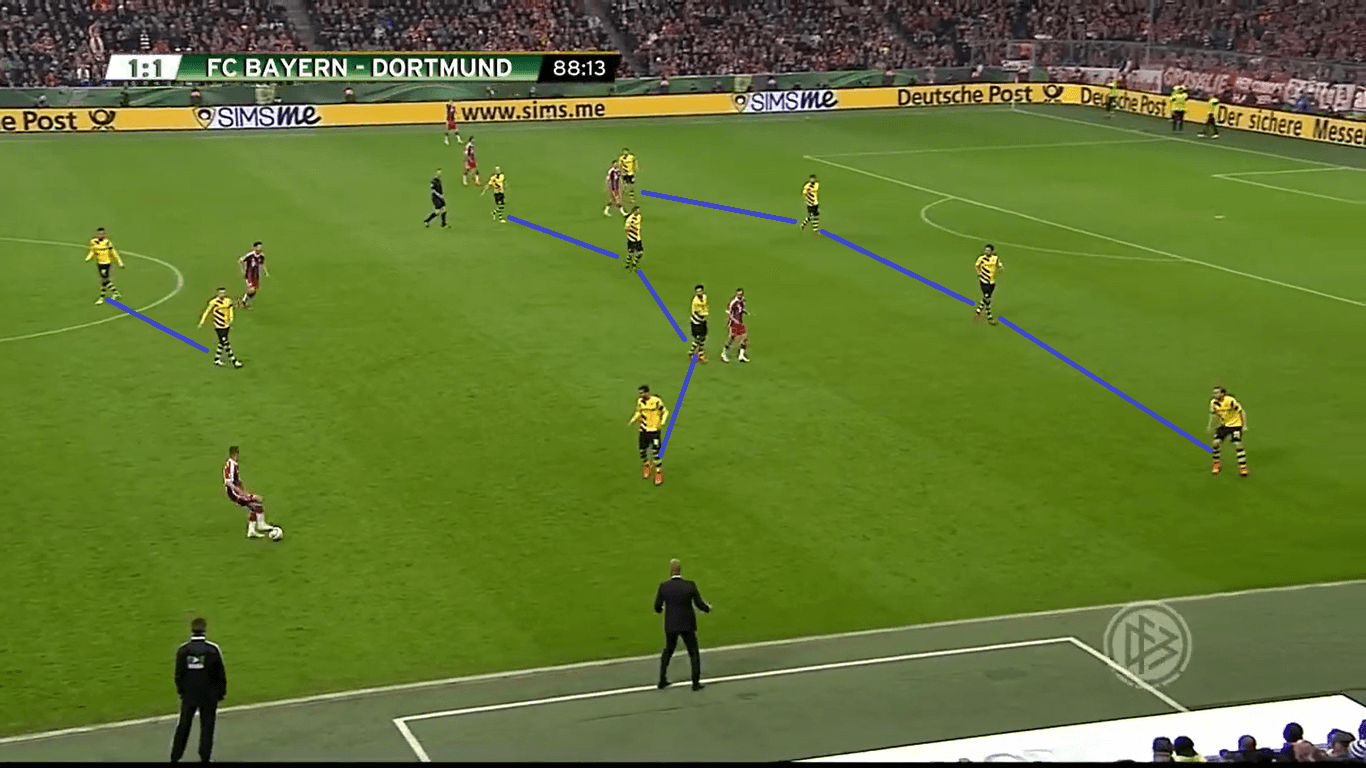 Dortmund seemed happy with the draw and wanted to reach the penalty shootout. Thus, as can be seen in the image above, they defended deep and tight in a 4-4-2. Bayern found no way through and the game had to be decided by penalties.

During the penalty shootout, drama happened when both Lahm and Alonso slipped and missed their penalties. Dortmund scored twice and had one foot in the final when Bayern’s goalkeeper Manuel Neuer missed the third penalty as well. Despite this, Neuer retaliated saving Dortmund’s third penalty and Bayern got another chance. But this time, it was Mario Götze who failed to score. Dortmund won the penalty shootout 2-0, as Bayern missed all four penalties.

In our tactical analysis, we have shown how Jürgen Klopp’s tactics neutralised Guardiola’s approach. Bayern could not compensate for their star wingers being injured. They tried to dominate the centre and combine through there, but Dortmund had a clear plan of how to prevent this. Taking Alonso out of the game surely helped a lot in that sense. Both teams were then able to score from transition attacks against a less organized opponent. Even though this game was not played at such a high level like the previous matches between these two teams, it does have a deserved place in German football history. Ultimately, Dortmund fell short to Wolfsburg in the final, losing 3-1. Nonetheless, it was a great ending to Klopp’s success story with the Borussia.