The second leg of the 2014 UEFA Champions League semi-final tie between Real Madrid and Bayern Munich looked to be a match that would see Real Madrid sit back and try to absorb all of the pressure that Pep Guardiola and Bayern Munich would throw at them, clinging to their one-goal advantage from their 1-0 victory in the first leg. Very few predicted that Madrid would come to Munich and beat Bayern 4-0, but that’s exactly what Carlo Ancelotti’s men did.

This tactical analysis provides an analysis of the tactics used by both Ancelotti and Guardiola that led to Real Madrid’s dismantling of their German rivals. Ultimately, Real Madrid were able to take advantage of the mistakes in Bayern’s tactics, putting four past the Bavarians and striding confidently into the final. 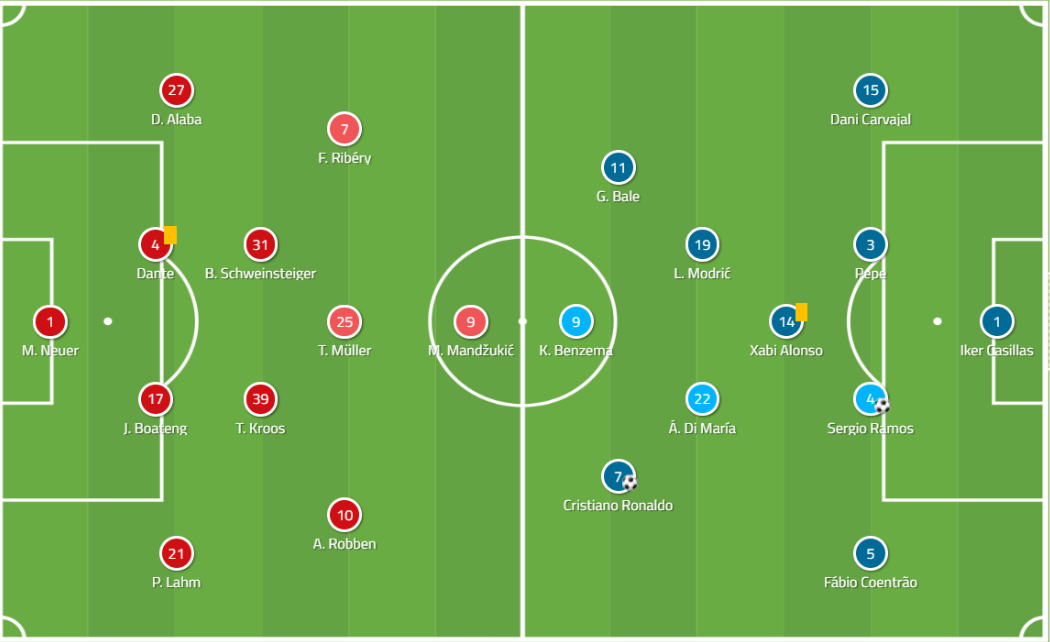 Pep Guardiola’s team sheet made it appear that Bayern Munich would come out in a 4-2-3-1, however, they spent most of the first half in a 4-2-4. Manuel Neuer started in goal again, with David Alaba at left-back, Dante and Jérôme Boateng as centre-backs, and Phillip Lahm as the right-back. Lahm’s absence in midfield was certainly noticed, with Toni Kroos and Bastian Schweinsteiger as the only two true midfielders in the side. Franck Ribéry and Arjen Robben started on the left and right wings, respectively, with Mario Mandžukić and Thomas Müller playing a more central role in the 4-2-4.

Carlo Ancelotti kept almost all of his lineup the same as the first leg, except for one key personnel change. Iker Casillas started in goal with Fábio Coentrão, Pepe, Sergio Ramos, and Dani Carvajal as the back four, with Pepe and Ramos as the centre-backs. The three midfielders in the 4-3-3 were Ángel Di María, Xabi Alonso, and Luka Modric. Cristiano Ronaldo started as the left-winger with Karim Benzema as the striker. Ancelotti’s big change was to start a fully-fit Gareth Bale as Madrid’s right-winger.

Bayern’s commitment to push numbers forward and reduce those in the middle of the pitch was ultimately what cost them a chance in this match. One of Guardiola’s key principles is to look to control the centre of the pitch. By only putting two centre-midfielders in the team, Guardiola essentially sacrificed the control of that area. 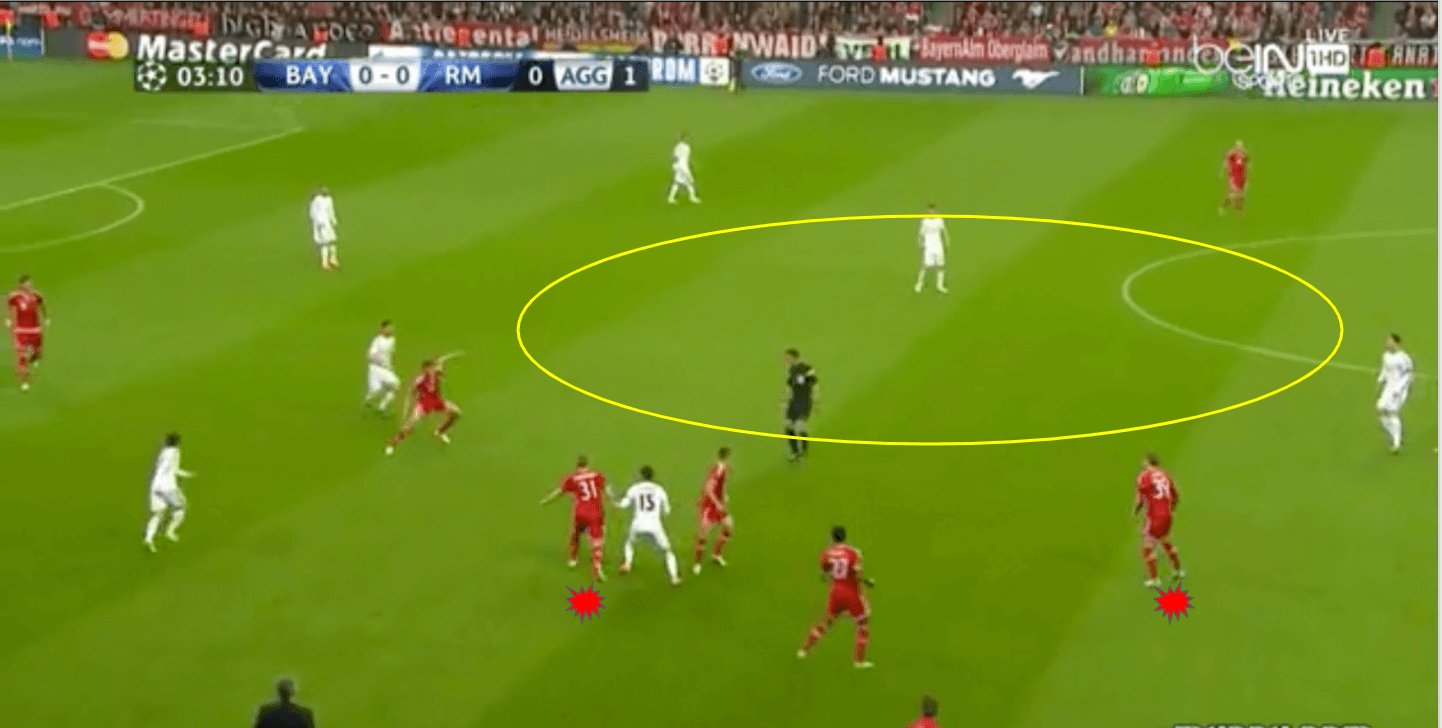 From the beginning of the match, Bayern were flying around the field, looking to press Madrid and force turnovers. Above, we see both centre-midfielders, Schweinsteiger and Kroos, shifted over to the left side. Being the only midfielders, they’ve completely abandoned the highlighted space. With no one there, not only could they not shift the possession of the ball from one flank to the other, but they also could not prevent any quick counter-attacks. Even with players in that space in the first leg, Madrid still had three successful counter-attacks, one of which resulted in a goal. They were set up for disaster from the beginning.

The lack of another midfielder also stunted Bayern’s progression in their build-up. This forced them to play longer passes to get out and into Madrid’s half, which caused all sorts of problems for Bayern. One of Guardiola’s core principles is that the ball must be progressed cleanly in the build-up – a long aerial pass is quite the opposite of that, as it has a 50/50 chance of being intercepted by an opponent. It also does not force Madrid to drop back and defend as much, leaving Bayern more susceptible to counter-attacks. Simply put, it prevents Bayern from dominating the game. 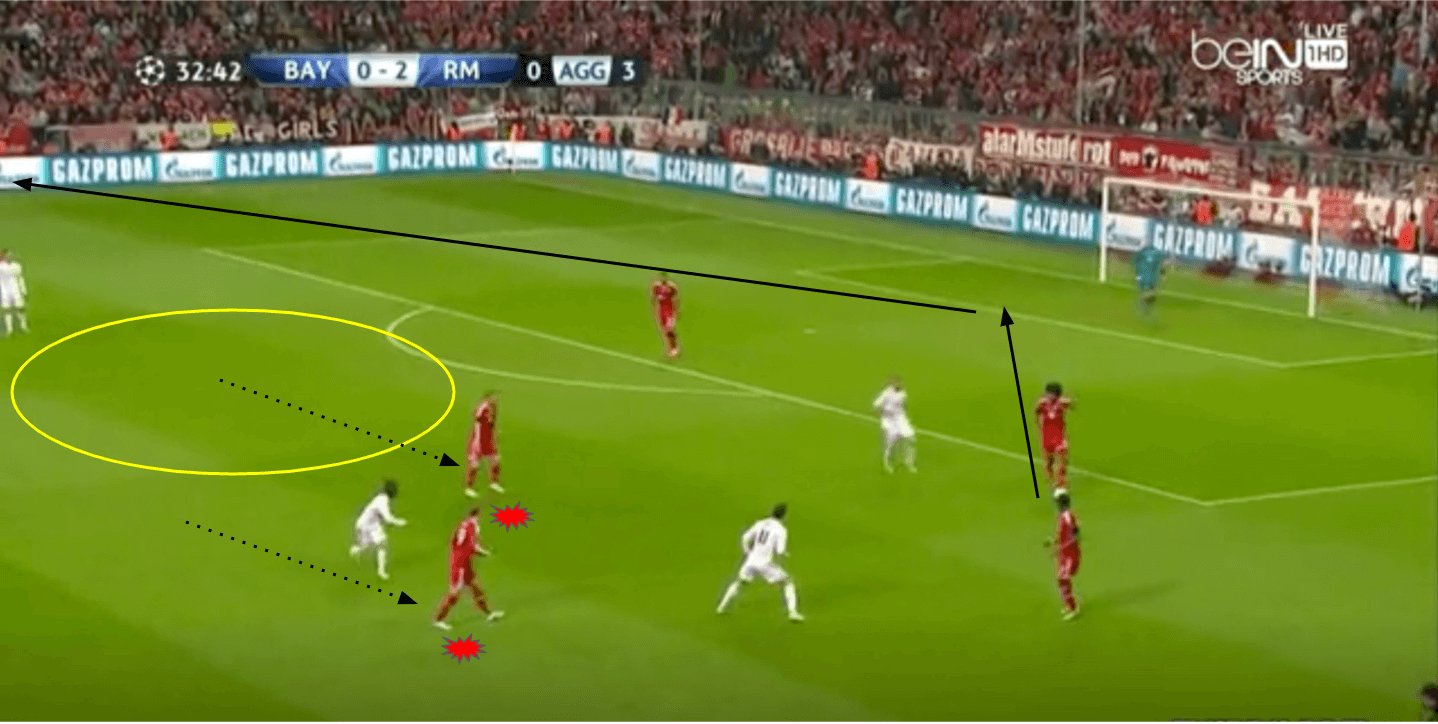 Here, Bayern had just won possession in their own defensive third. Both Schweinsteiger and Kroos had shifted over to apply the appropriate amount of pressure. However, Bayern were then unable to play out of the pressure without sending it back to Neuer. If they had another midfielder, a rotation to get that third man open could have occurred. Instead, Dante ends up playing it back to Neuer, who played a long aerial pass to Lahm. 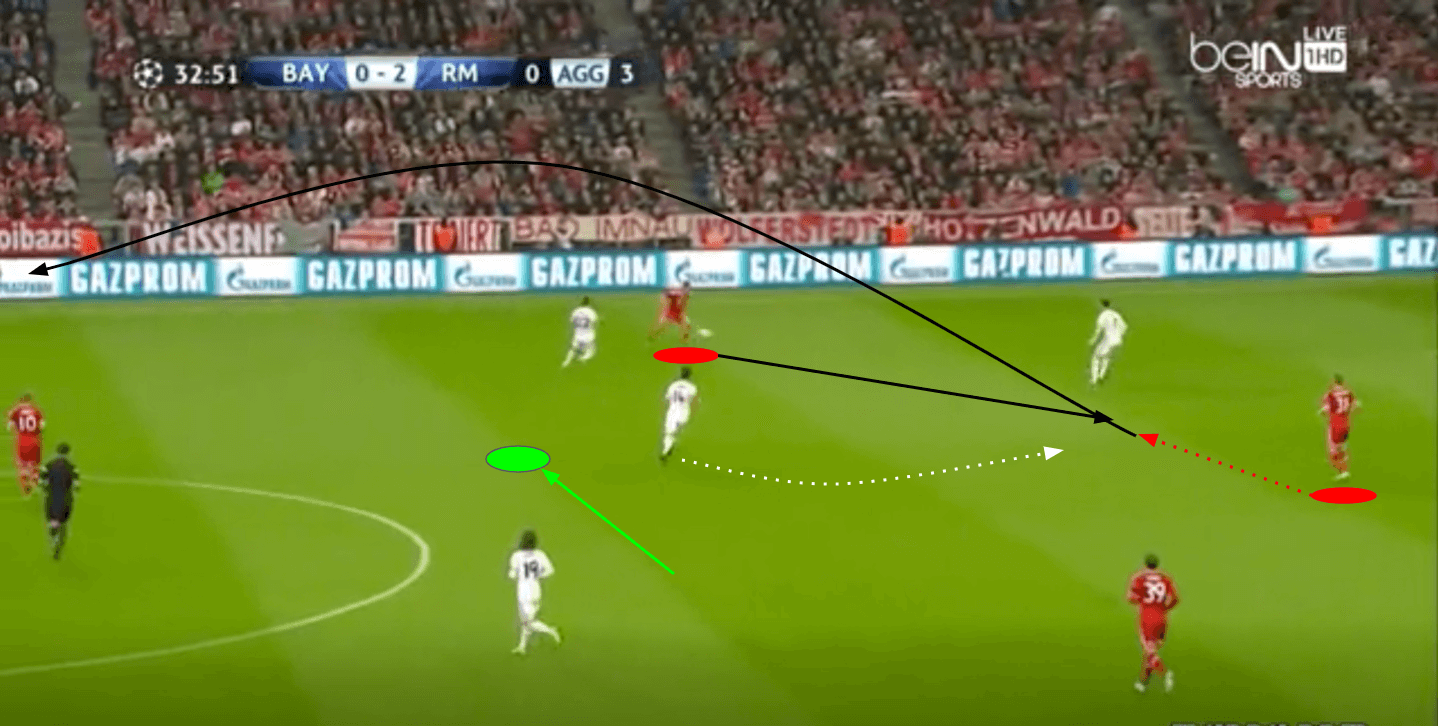 As Lahm controlled the ball at his feet, Schweinsteiger did shift over to be a passing option. However, as Lahm went to play him the ball, Xabi Alonso curved his run to eliminate Kroos as an option. This meant that Schweinsteiger had two options: play it back to Lahm and most likely turn it over, or send the ball up the pitch through the air. He chose the latter option, where Thomas Müller had to fight off Fábio Coentrão to win the ball.

The green arrow and circle highlight what the ideal positioning would have been if Bayern had another midfielder. Alonso would have had to alter his run so as to not allow a direct pass, which means that Kroos would have been an option for Schweinsteiger to progress the ball cleanly. This struggle in the middle of the pitch occurred for the entire first half, and it wasn’t addressed until Guardiola subbed Javi Martínez in for Mario Mandžukić at half-time.

Bayern’s reliance on Arjen Robben made sense. He ended the season with 21 goals and 17 assists, leading Bayern in assists and finding himself third amongst goal scorers, with the two strikers, Mandžukić and Müller, leading the way. In the first leg, Bayern relied heavily on Robben, almost to their detriment. In this match, Madrid were more prepared for Bayern’s wing-play, and Bayern didn’t have enough men in the midfield in order to take advantage of the available space. This meant Bayern essentially didn’t have a plan B and were punished for it. 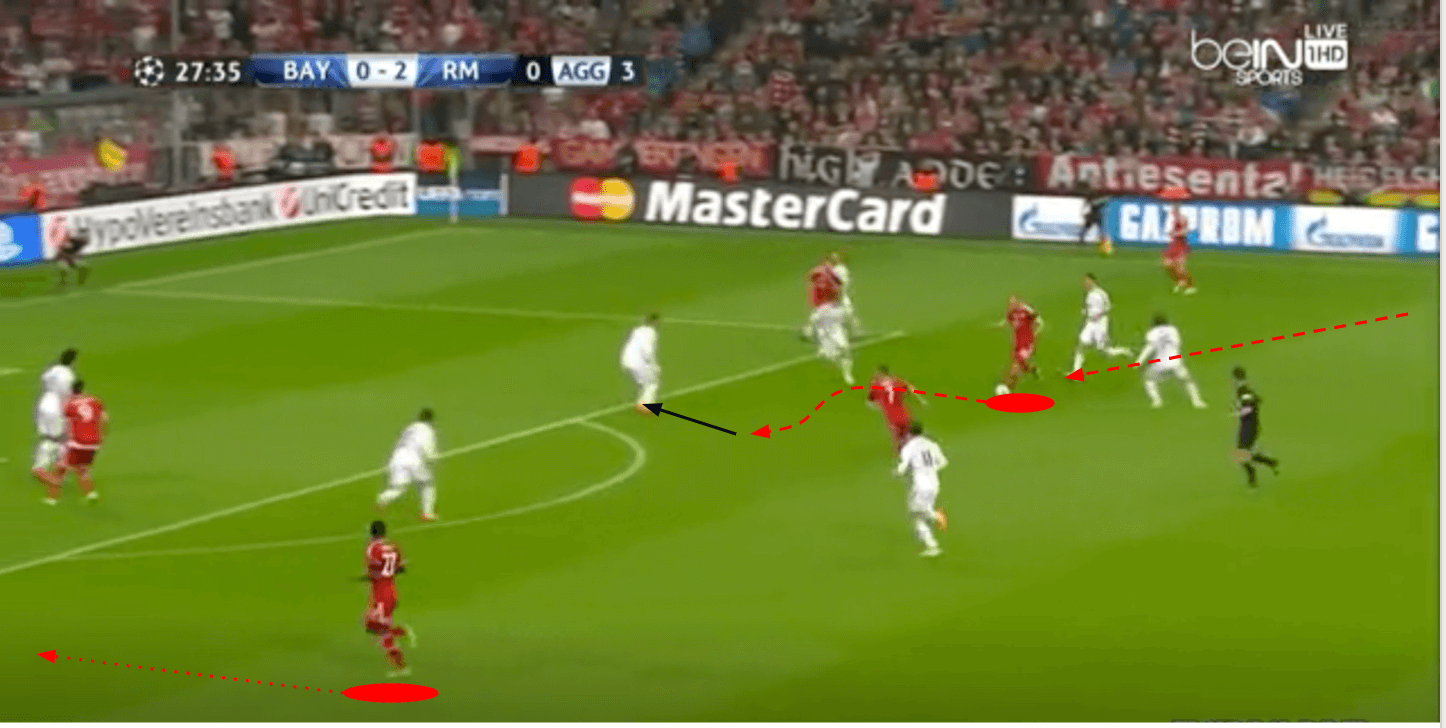 Already down 2-0 on the night and 3-0 on aggregate, Robben seemed desperate to get the Bavarians on the board. Here, he took the ball from the wing to the half-space, attracting the attention of five Madrid defenders. Seconds before, he had done something similar and was able to find David Alaba who was making a vertical run and delivered a driven cross on the ground. In this instance, Robben opted to shoot, despite the aforementioned attention of five Madrid defenders. The shot was blocked and went out for a corner. Despite his teammates’ understandable frustration with his unwillingness to pass, they continued to play Robben the ball in less-than-desirable situations.

Here, Robben received the ball with three Madrid defenders facing him, and Phillip Lahm trying to speed into the half-space in order to provide some support. Instead of waiting for him and having a somewhat more favourable 2 v 3, Robben opted to try and dribble past his opponents. While Robben was quite a technically-gifted dribbler, he was not able to beat all three of those opponents, and the ball was forced out for a throw-in.

While the blame certainly cannot be placed squarely on Arjen Robben, his decision-making at times was poor. The bigger problem was that after having their left-wing trio of Kroos, Alaba, and Ribéry shut down earlier in the match, Bayern had no other option than to try and play through their assist-leader. While Real Madrid learned from their mistakes in the first leg, Bayern were unable to learn from theirs, and their lack of goals over the tie showed that clearly.

Bayern Munich certainly had some questions to answer regarding their creativity going forward, but another large part of their frustration came from the growth from the first match that Real Madrid demonstrated defensively. In the first leg, Real Madrid were leaving gaps in the centre of the pitch while not properly shutting down Bayern’s wing play. This all changed in Munich, and the change was apparent within the first minute. 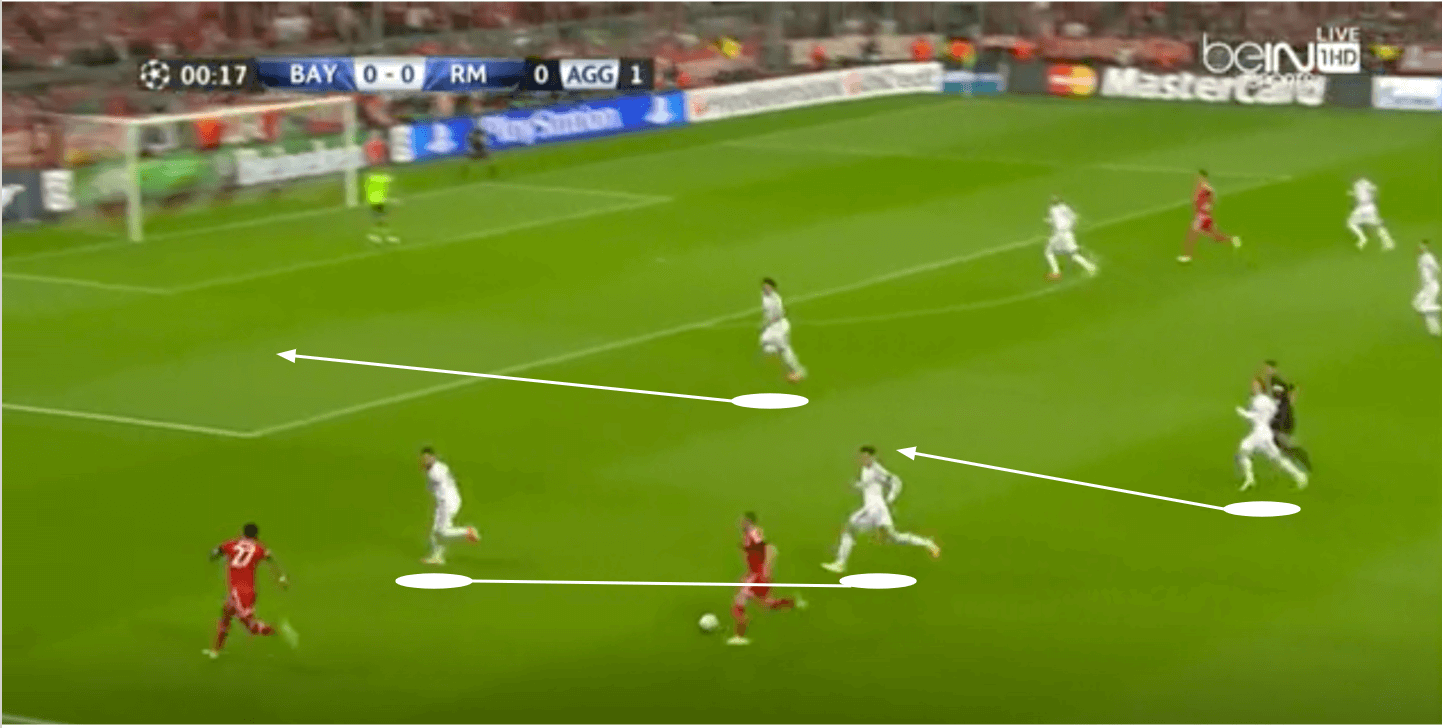 Seconds into the match, Alaba and Ribéry were trying to kickstart the same attacking mojo they had in the first match. This time, however, Madrid were prepared. Dani Carvajal and Gareth Bale were both close in on Alaba and Ribéry, making sure to provide 1 v 1 pressure. Behind them, Pepe was prepared to slide centrally on the last line of defence if they were able to combine and get past Carvajal. If Bale was the individual who was beaten 1 v 1, then Modric was also able to apply pressure. Both Pepe and Modric, who were lined up as central players, as well as their corresponding defensive counterparts, Sergio Ramos and Xabi Alonso, would shift over towards their respective wing, giving Madrid the numerical advantage.

As the match progressed, Madrid continued to pressure by committing numbers to overload the area of play in their favour. 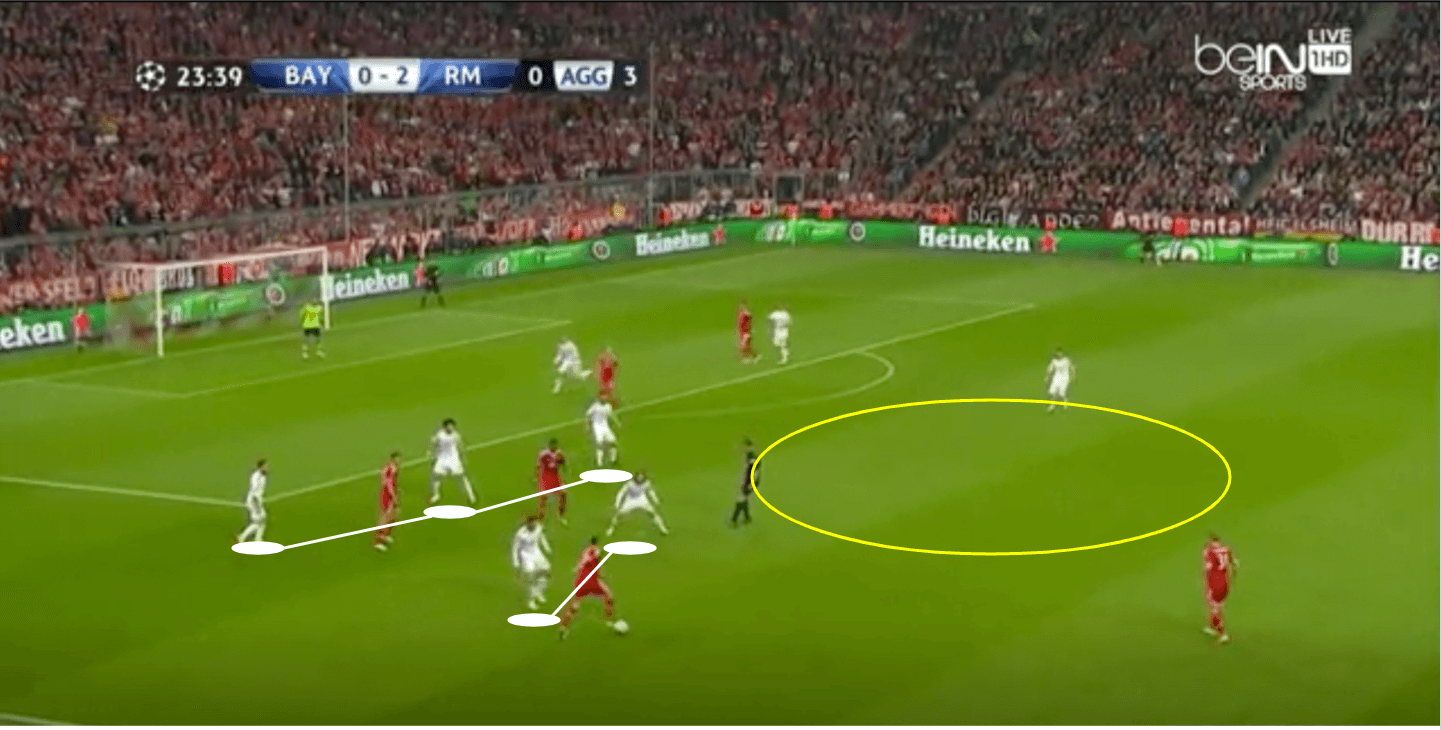 Here, Thomas Müller joined the attack, trying to play in between the two lines of defenders. Madrid is compact both vertically and horizontally, making it nearly impossible for Bayern to play through them. What Madrid had given up was the centre of the pitch, where no one had slid over to defend. Luckily for them, Bayern were also not sending men into that area, and Madrid’s compact structure would hold. This continued for the entire match, with Bayern’s play becoming more predictable. Madrid were able to weather the storm and deflect and block any attempts to get through, ultimately shutting out the German champions.

While their defending held strong and Bayern offered space to exploit in the centre of the pitch, Real Madrid’s counter-attack thrived in Munich, constantly threatening Neuer’s goal. While their first two goals came from set-pieces (a corner and a free-kick), the quick, fluid counter-attack got Madrid into those positions in the first place.

Already up by two goals in the match, Madrid continued to look for opportunities to counter-attack as Bayern pressed forward. In the image below, the two Bayern midfielders, Schweinsteiger and Kroos, are highlighted.

The two men have committed too far forward, leaving no protection in the centre of the park. There is no one in the space behind them. Not visible in the image are Karim Benzema and Cristiano Ronaldo, who were awaiting the pass from Xabi Alonso. Boateng and Dante were marking the two attackers, but this was certainly a qualitative advantage for Madrid. Ronaldo was allowed to dribble at Dante after receiving the pass, and he just narrowly missed putting Madrid ahead with a shot that went just wide.

While Bayern were lucky to escape that time, Madrid’s counter-attack, coupled with Bayern’s absence in the midfield, directly led to their third goal of the evening. Gareth Bale found himself in possession at the top of his penalty area after a misplaced pass by Ribéry.

Schweinsteiger stepped to press, and Bale slid the ball to Ángel Di María, who drove a long pass up the pitch to Benzema, who was still being man-marked by Dante. This long vertical pass was again made possible by Bayern’s lack of presence in the middle of the pitch. 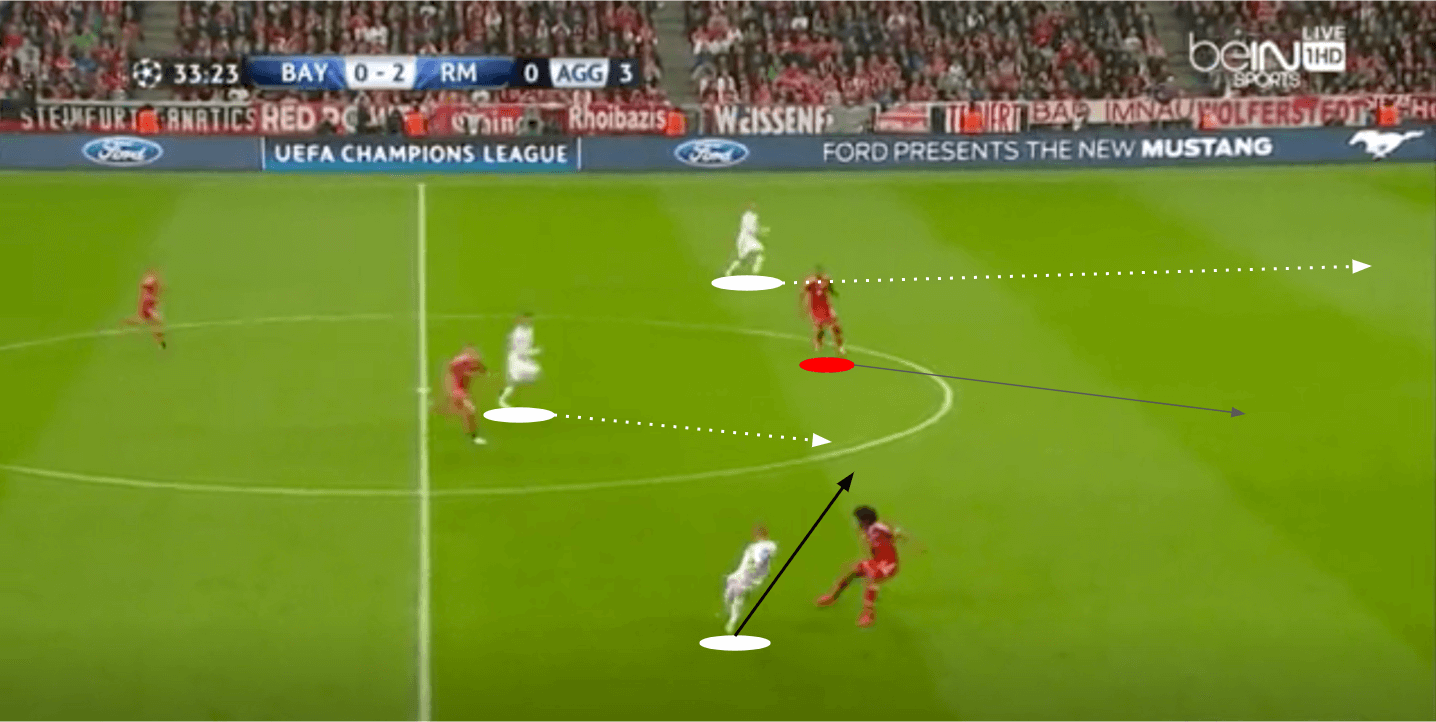 As the ball arrived at Benzema’s feet, Bale arrived to run directly through Bayern’s centre-back pairing. This drew the attention of Boateng, who was forced to slide over as Bale dribbled at Neuer. Ronaldo kept pace with the play on the left side of the pitch, and Bale slotted the pass over to a wide-open Ronaldo, who scored the third goal on the evening, effectively ending Bayern’s chance to return to the Champions League final.

Madrid’s adjustments to their game plan from the previous leg saw them not only improve their defensive qualities, but they also were able to continue to counter-attack effectively. After the match, Guardiola assumed all responsibility for Bayern’s defeat, and rightfully so. While Bayern still won the Bundesliga as well as the DFB-Pokal, the Champions League title-holders’ defeat against Real Madrid stung more than they’d like to admit.

Real Madrid used the big win to spur them on to their tenth Champions League title, also known as ‘La Decima.’ The victory in Munich certainly filled them with the confidence to go into Lisbon and defeat Atlético Madrid to earn themselves the mystical ‘La Decima’ that had eluded them for so long.