Sergio Reguilón, currently on loan at Sevilla, has been one of the stand-out talents in La Liga this season. The Spanish left-back will return to Real Madrid come the summer, however, may struggle to get into the starting eleven with Marcelo and Ferland Mendy providing serious competition for the left-back spot. As a result, Real Madrid could be looking to sell to free up funds for other positions, putting top European clubs in need of a left-back on high alert.

This tactical analysis will look at Reguilón’s strengths and potential weaknesses while examining what makes him the ideal modern-day fullback.

Reguilón plays an important role for Sevilla in the initial stages of their build-up. In the first phase of build-up, Reguilón stays wide and relatively deep, positioning himself just ahead of the centre-backs. This allows him to receive with less pressure, increasing the opportunity for vertical passes into teammates positioned in more advanced areas. This aspect of his role is evidenced by his 10.18 progressive passes per 90. Furthermore, his ability to play these passes successfully is proven by his 81% completion rate. 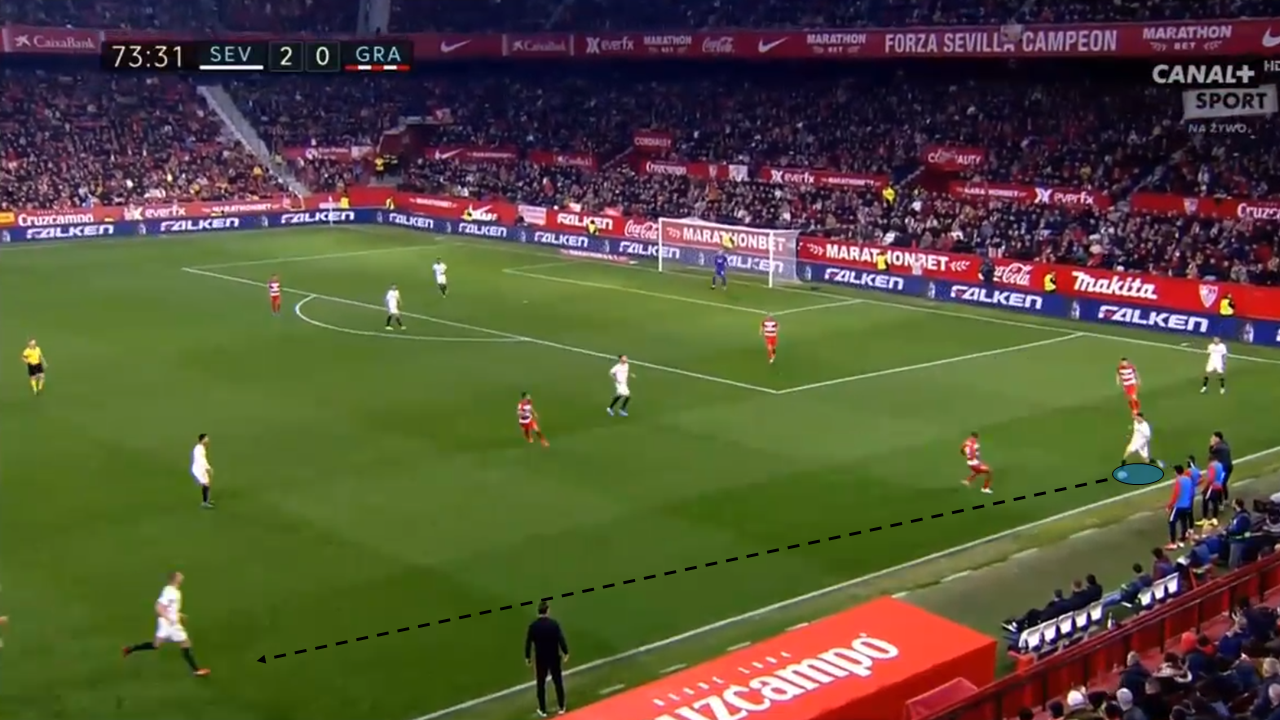 This quality is particularly important when playing teams that like to press high since Sevilla like to be brave in possession and play out from the back, as demonstrated in the example above. Here, we see Granada pressing high, with their right midfielder staying tight to Reguilón (highlighted blue). He opens up his body with his first touch to be able to play a vertical pass down the line to a teammate, bypassing opposition pressure in the process. 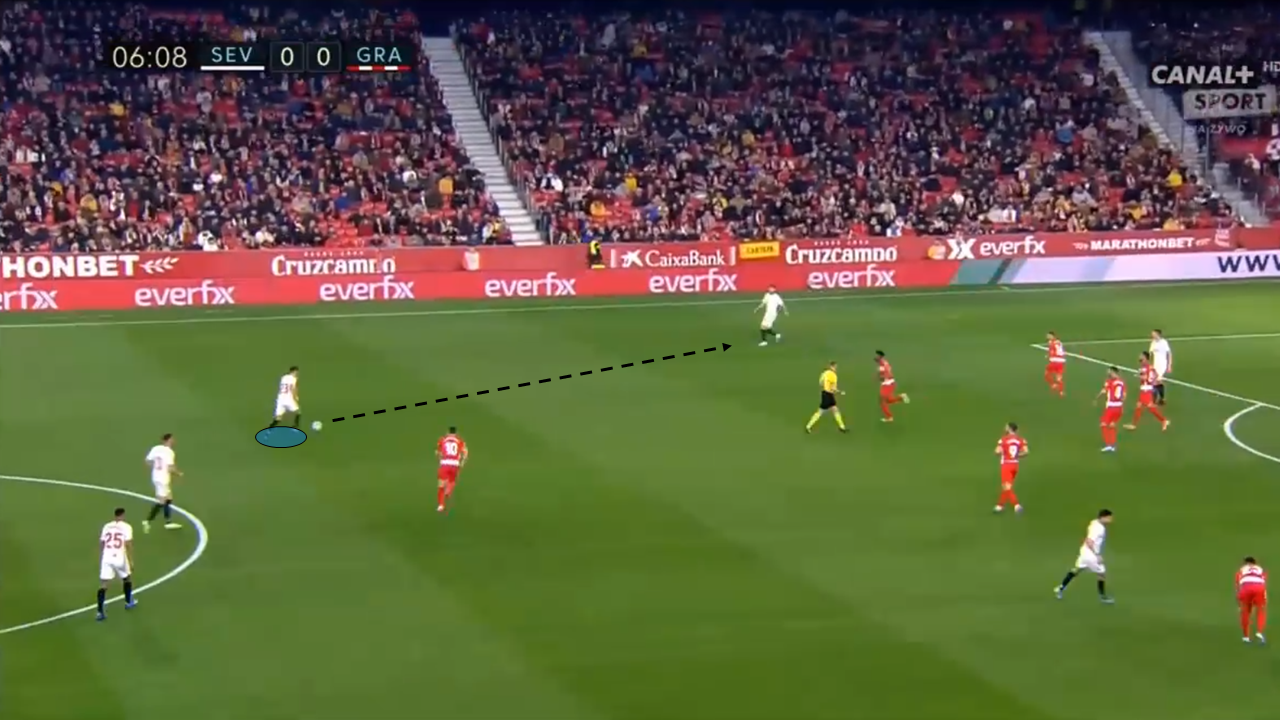 On this occasion, Reguilón is positioned slightly further inside. This creates a better passing angle to the winger who can then receive 1v1 against the opposition fullback.

Once Sevilla reach the final third, Reguilón becomes far more attacking minded. He is tasked to make runs into depth both on the overlap and the underlap to get into a good crossing or shooting position. The decision to underlap or overlap is dependant on how central the positioning of the wide forward on his side of the pitch is. 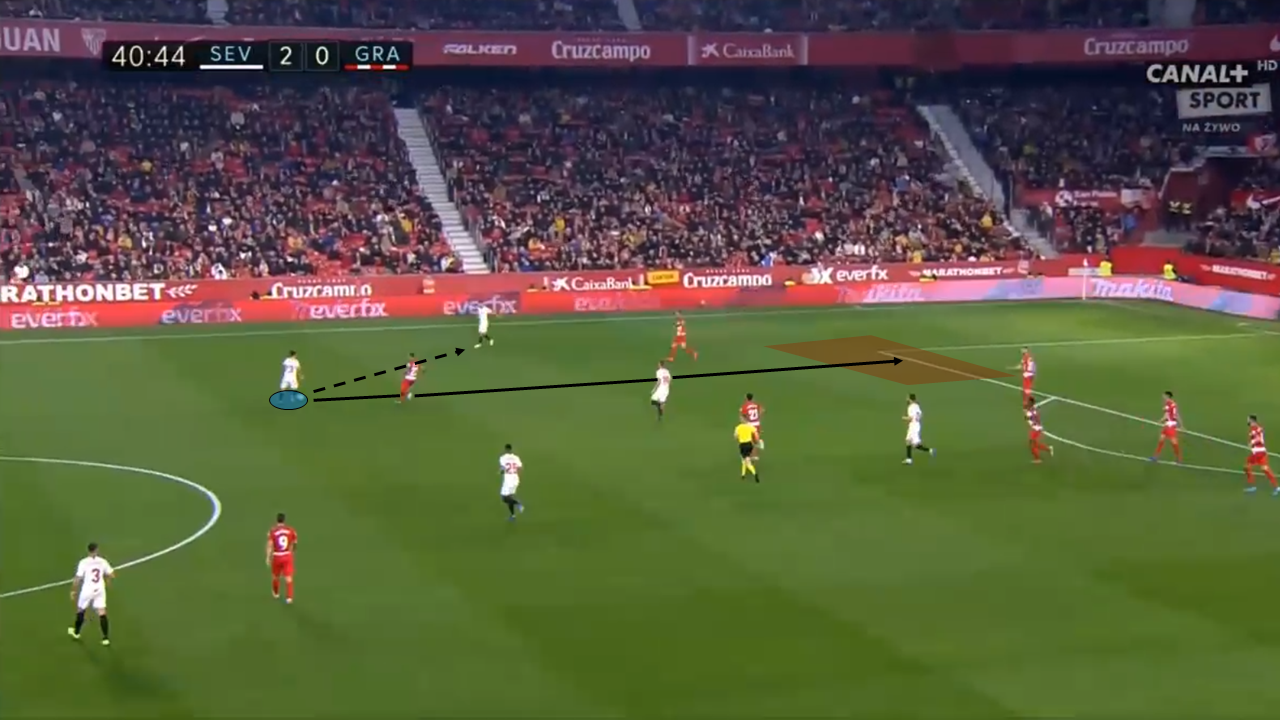 This example shows the Sevilla wide forward against the touchline, pulling the opposition fullback towards him, thereby creating space between fullback and centre-back. Reguilón plays a pass to the wide forward before immediately running into the space to receive behind the defence.

These underlapping runs allow him to arrive more frequently in goalscoring positions than the vast majority of fullbacks. In fact, this season Reguilón has had the second-most shots, 23, of any fullback in La Liga.

However, Sevilla’s wide forwards will often drift inside when approaching the penalty box to offer central support. When they do so, the opposition fullbacks get dragged inside, leaving space open on the outside for Reguilón to run into on the overlap. 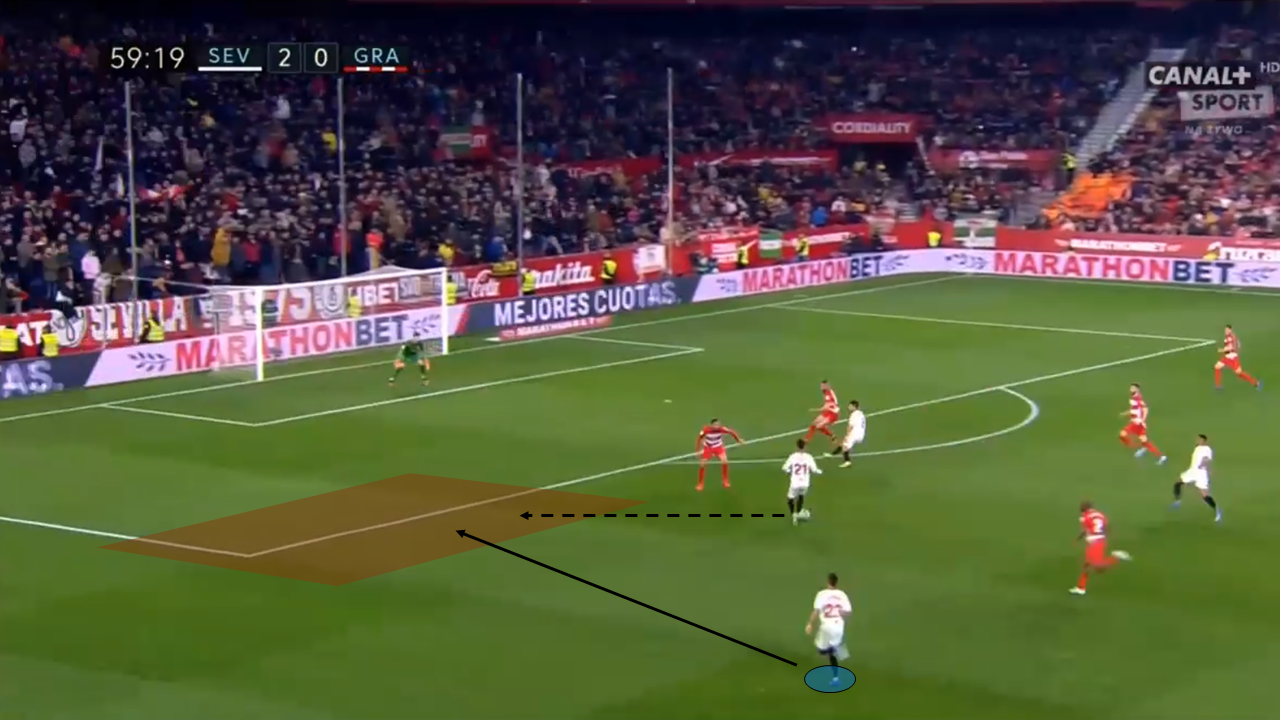 This example exhibits the wide forward carrying the ball inside towards the centre. As he does so, Reguilón uses his explosive speed to offer the option on the overlap, now able to receive in a dangerous area. 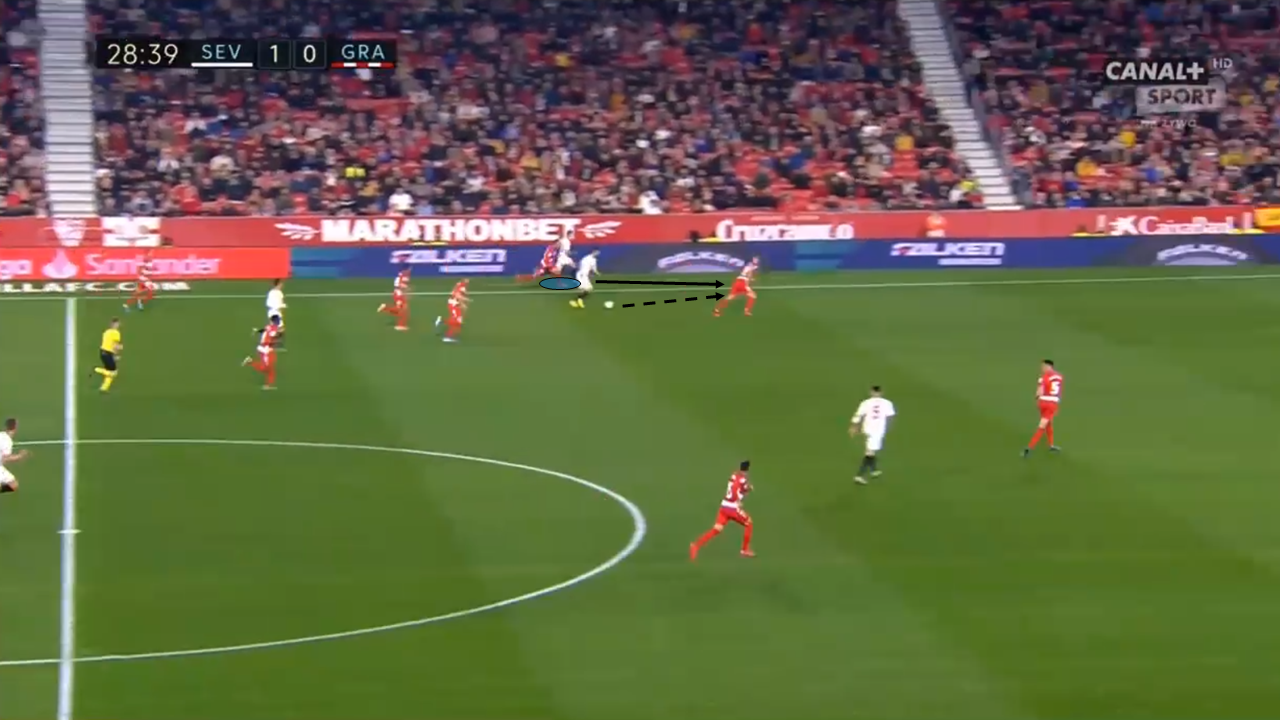 This instance shows Reguilón again on the overlap. After running onto the pass, he once again uses his pace to get in behind the opposition backline. 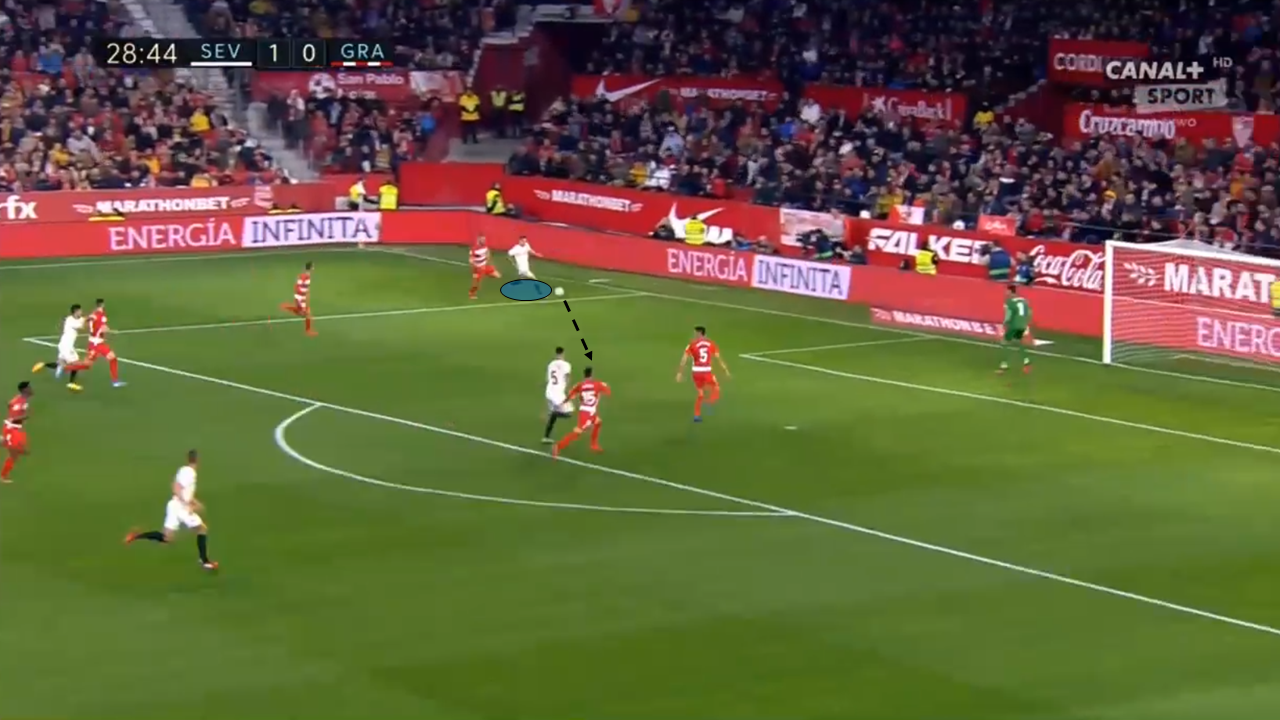 This leads to a very good goalscoring chance from a cutback, as demonstrated above.

His special intelligence in deciding whether to overlap or underlap makes him perfectly suited to a dynamic, two-footed winger, such as Son Heung-min, that can both hug the touchline and drift inside to open up space for the overlap.

Ability to carry the ball

Perhaps his finest attribute, Reguilón excels at carrying the ball up the pitch at speed. His current status as the leading fullback in La Liga this season in terms of progressive runs outlines his excellent dribbling technique and a top speed that enables him to accelerate away from defenders. At a height of 5’8”, his low centre of gravity allows him to shift the ball quickly to evade opponents’ challenges while short leg strides provide him with quick enough acceleration to burst into the space created by dribbling through the opposition. 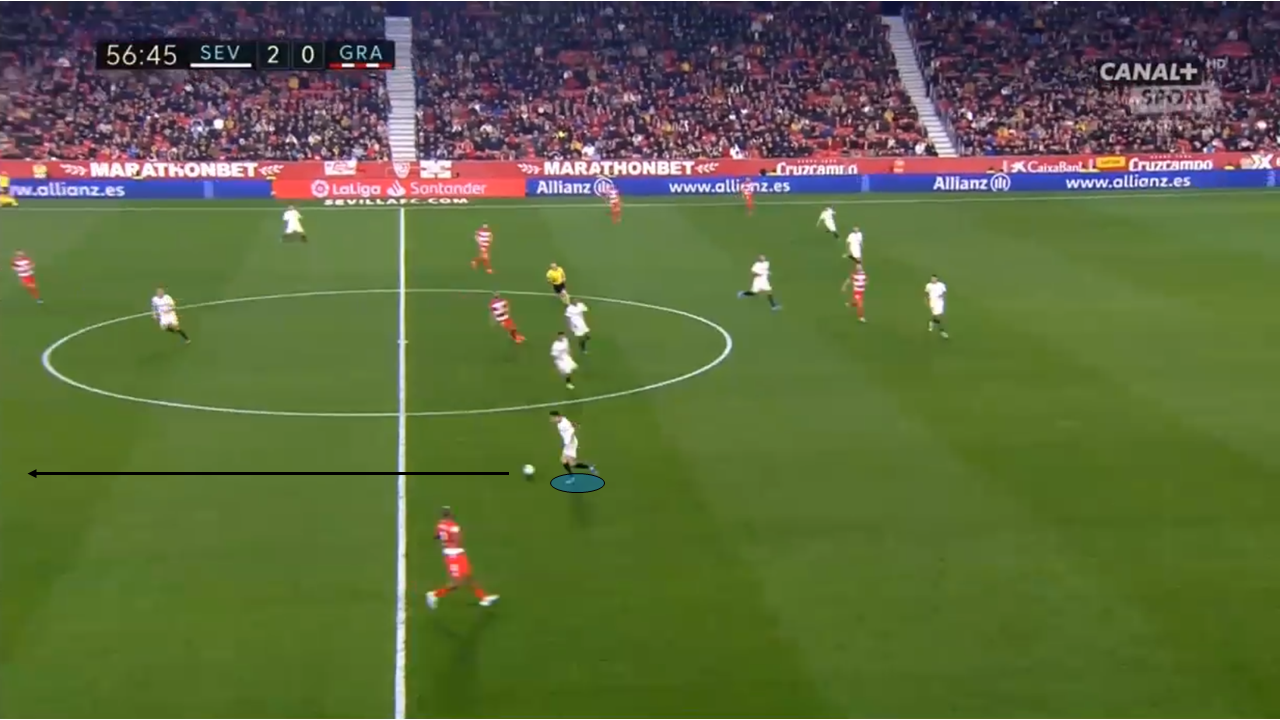 Here, Reguilón picks up the ball inside his own half and immediately looks to drive into the space. 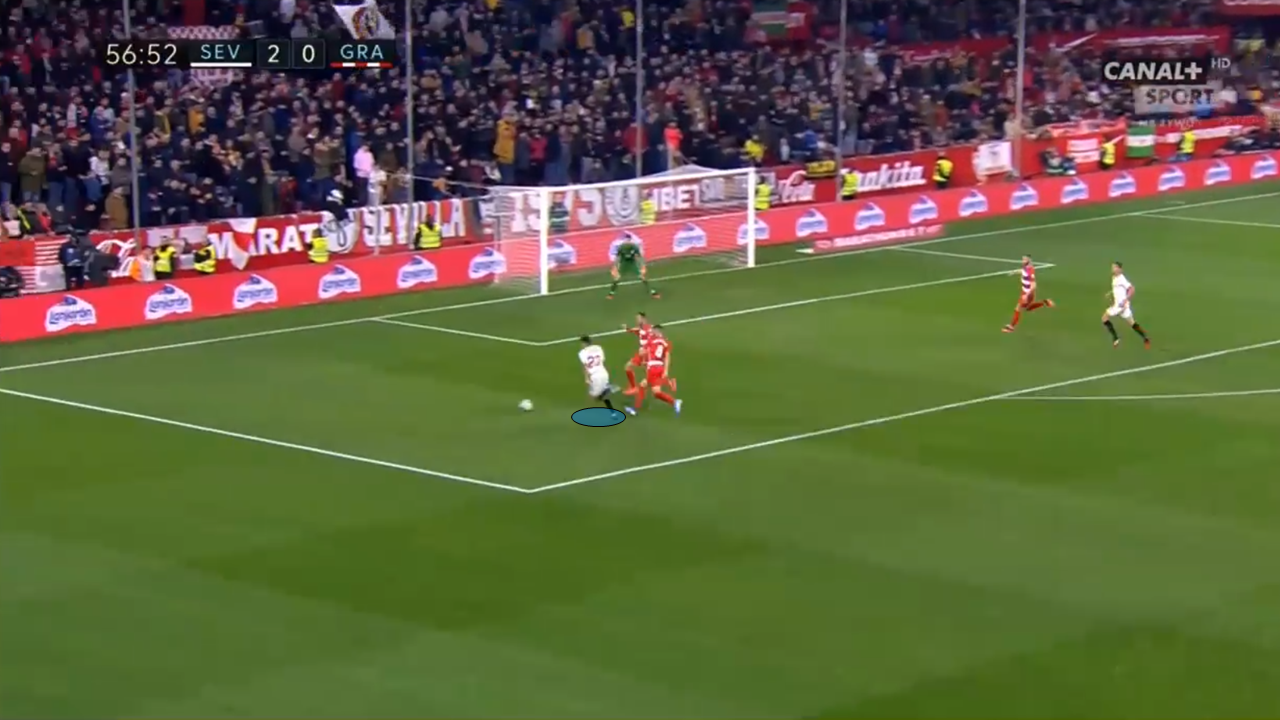 Reguilón has managed to now arrive in the box having carried the ball from back inside his own half, evading the challenges of two defenders along the way, as shown above.

His proficiency in terms of his ability to carry the ball up the pitch created the second goal in Sevilla’s 2-0 win over Granada earlier this season. 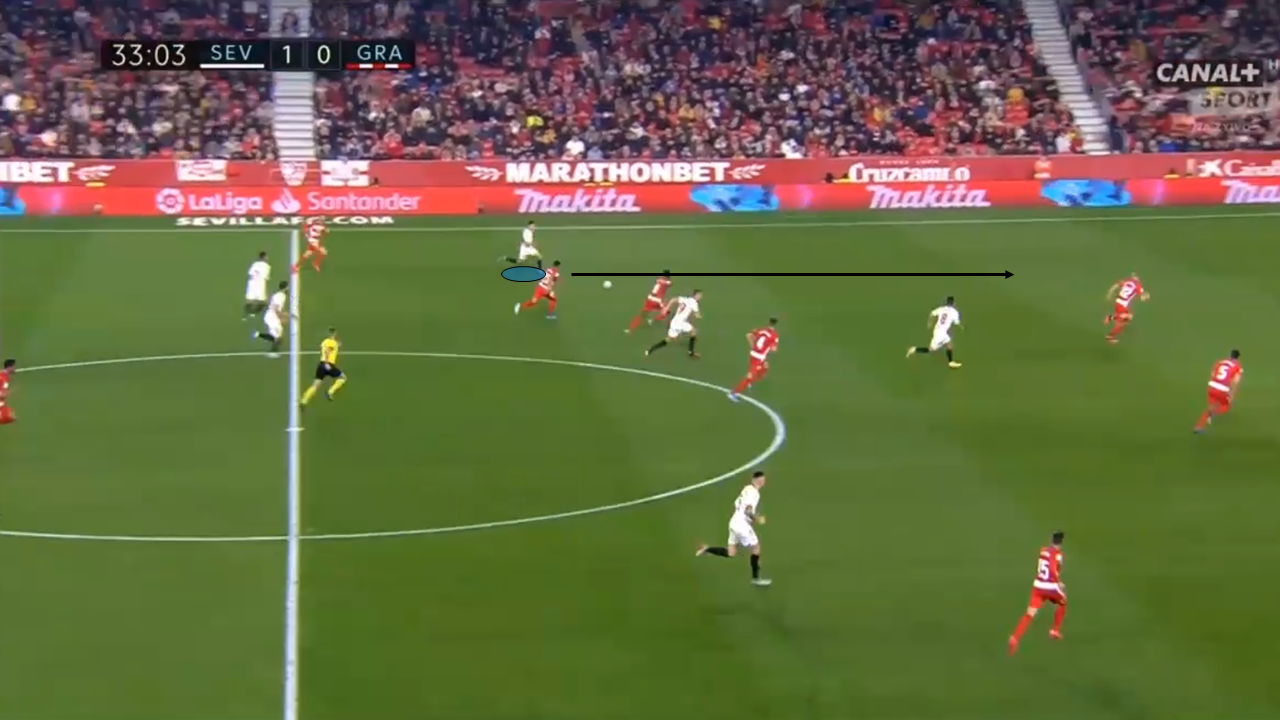 The run begins just inside the opposition half with space to run into. His acceleration allows him to get away from chasing midfielders and drive at the heart of the defence. 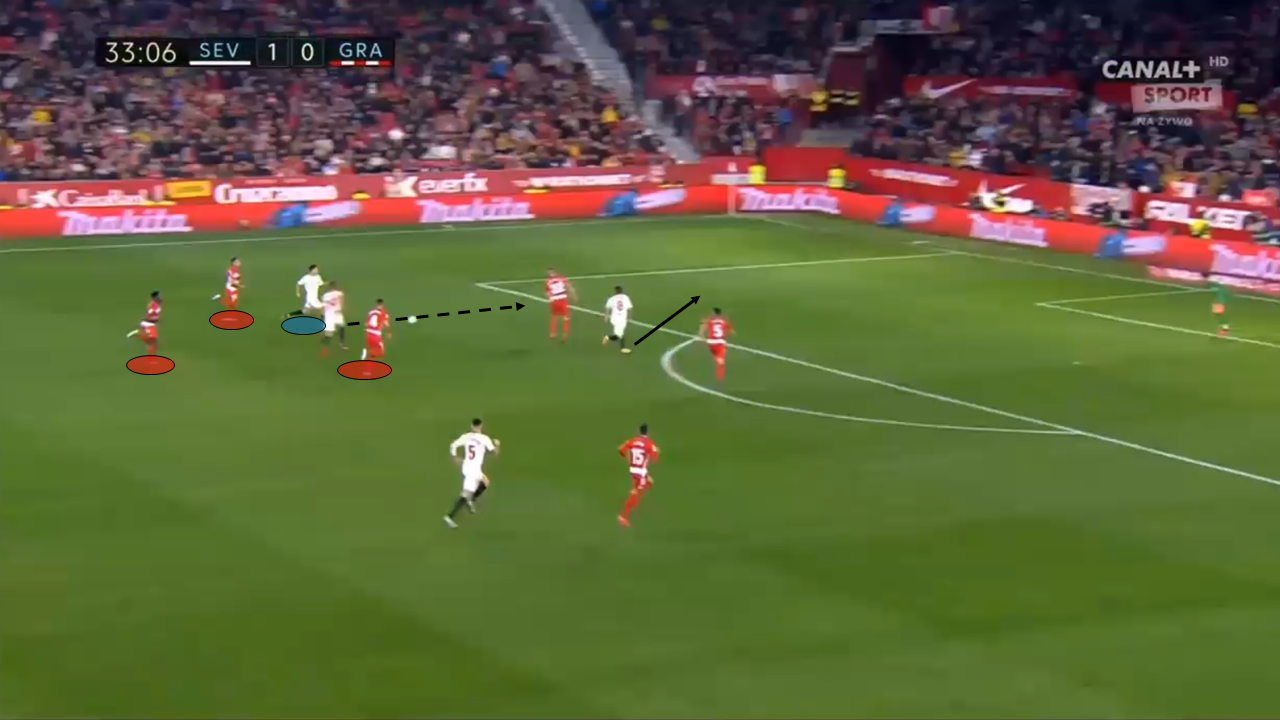 Despite being surrounded by three opposition players, he demonstrates his precise weight of pass and plays a teammate through on goal who converts the opportunity.

Reguilón’s ferocious capacity to drive at the opposition could be of great use to a team, such as Liverpool, whose tactics involve exploiting the large spaces that are available as soon as possession is won. In addition, his superb endurance enables him to keep this up over the course of the full 90 minutes, which is an important aspect of playing for a top-level side.

Quality of the final ball

As previously discussed in this scout report, Reguilón possesses a great variety of attributes that result in him arriving into good crossing positions, and as a result, has attempted 5.34 crosses per 90 this season, the sixth-highest of any fullback in the league. Despite regularly finding himself in good positions, his crossing accuracy is 39%. Although this is by no means poor, it is lower than every other fullback in the top eight for attempted crosses per 90. Judging by this alone, we can see that this is a clear potential improvement for Reguilón to make. However, at just 23-years of age, he certainly has time to develop this area of his game. 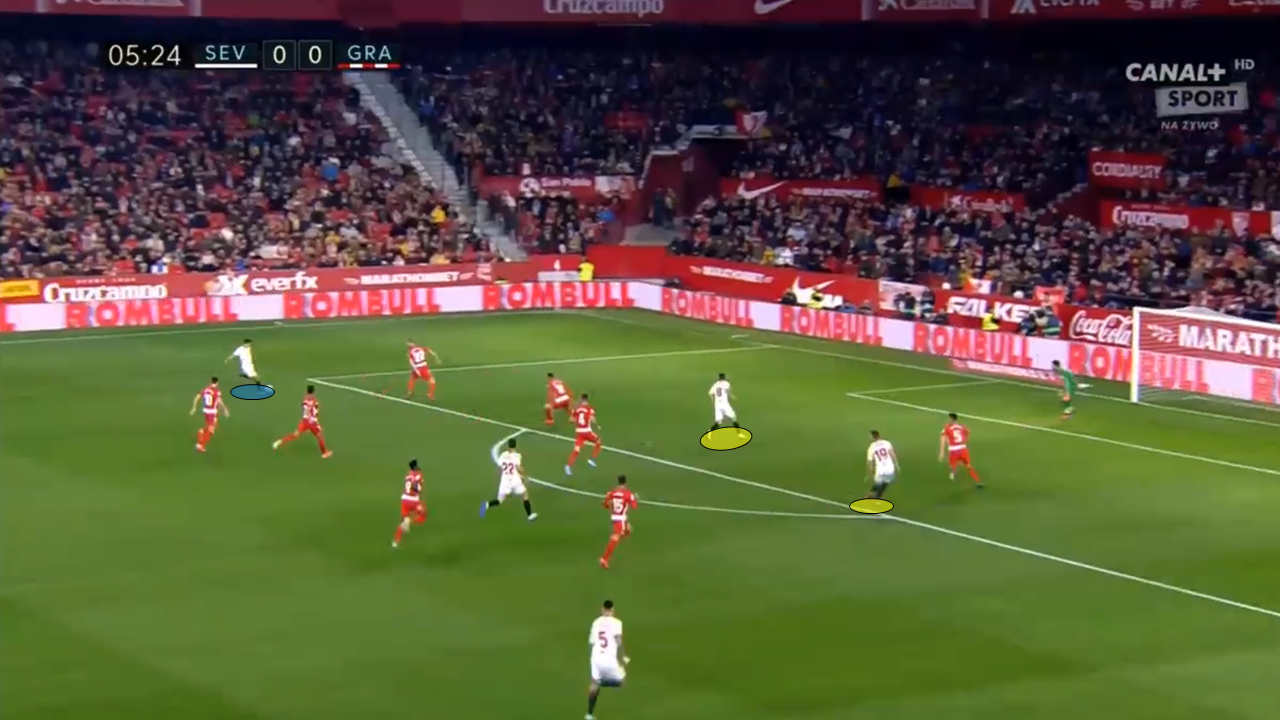 The image above displays Reguilón preparing a cross having arrived in an advantageous position after performing one of his characteristic driving runs. This is a very promising situation for Sevilla with a two against one over the opposition ball-far fullback, meaning Reguilón has teammates in plenty of space to aim at. 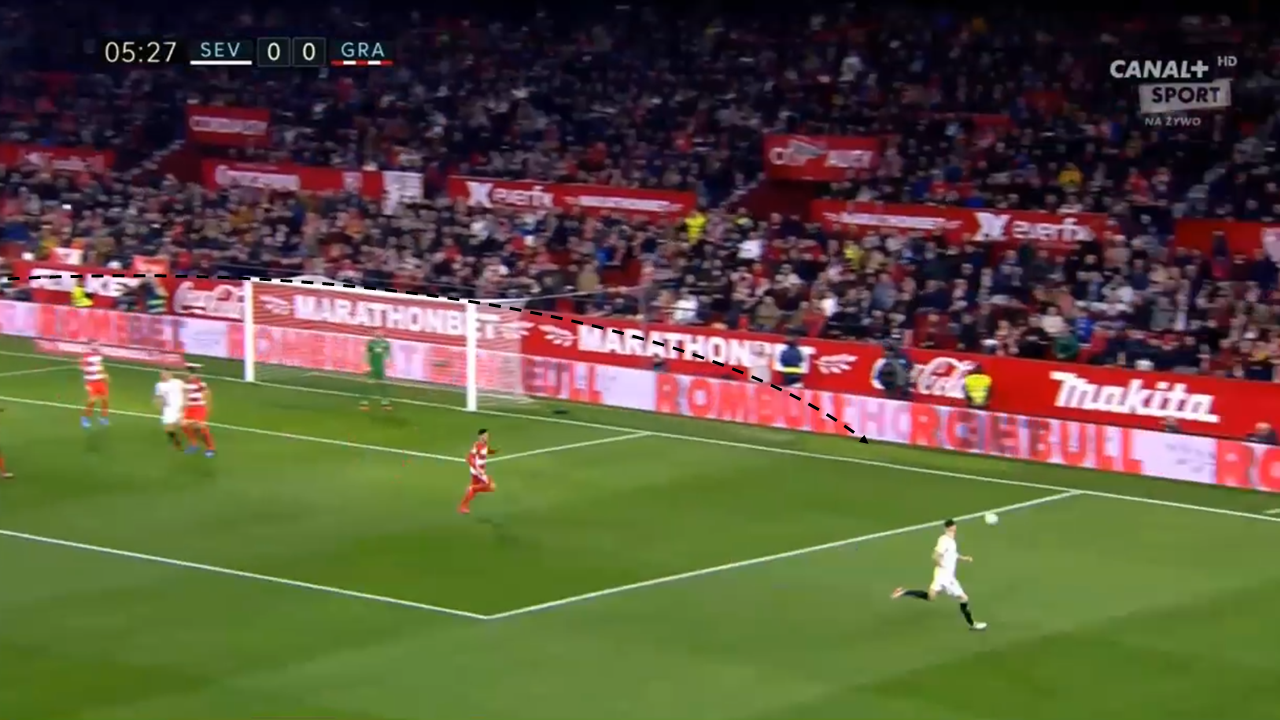 Instead, Reguilón substantially overhits the cross which completely misses the box. 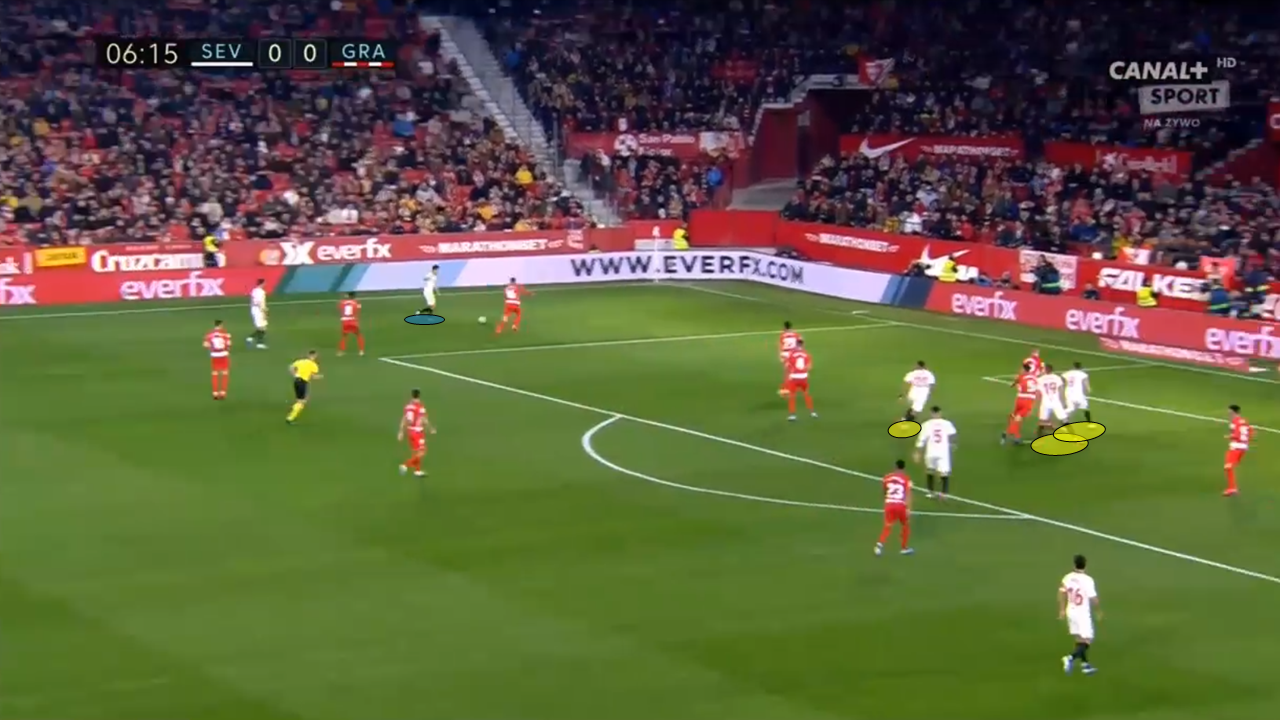 The above example, less than a minute after the previous example, again shows Sevilla overloading the box in anticipation of a cross from Reguilón. 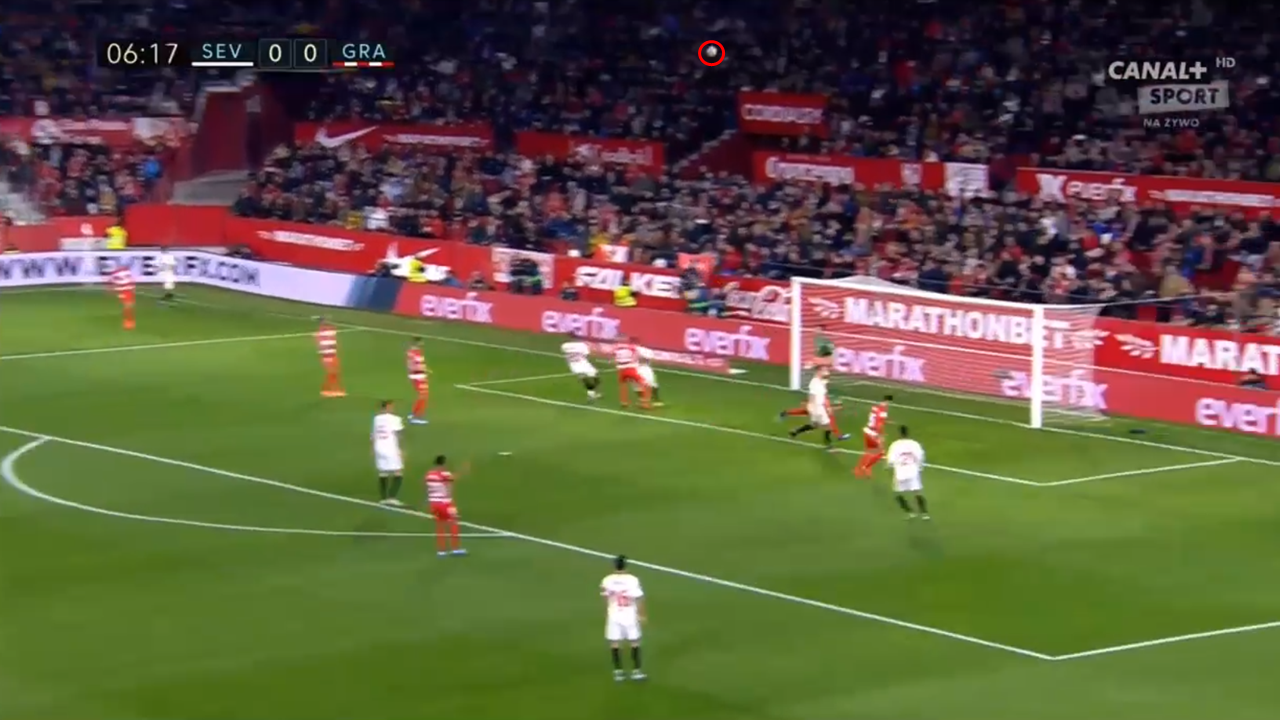 Once again, Reguilón fails to pick out a teammate in the box from a promising position.

Reguilón’s issue with overhitting crosses is down to his poor preparation just before striking the ball. While his pace allows him to get into these positions, it is hindering the quality of the final ball as he is too rushed while striking the ball. To improve his accuracy, he must learn to slow down before crossing to be able to maintain his balance and hit the ball in the correct spot while making sure to not lean back.

Reguilón displays a proactive style of defending, preferring to win the ball high up the pitch rather than being left in 1v1 situations against the opposition winger. His defensive statistics of 8.57 recoveries, 9.01 defensive duels, and 4.04 counter-pressing recoveries per 90 reflect this aggressive, front-foot nature. As a result of this, he would fit well into a team that looks to press the opposition high rather than sit back in a block. Furthermore, his pace makes him well-suited to covering large spaces on defensive transition, for example, making him a useful asset to have sat deep when taking corners in case of an opposition counter-attack. 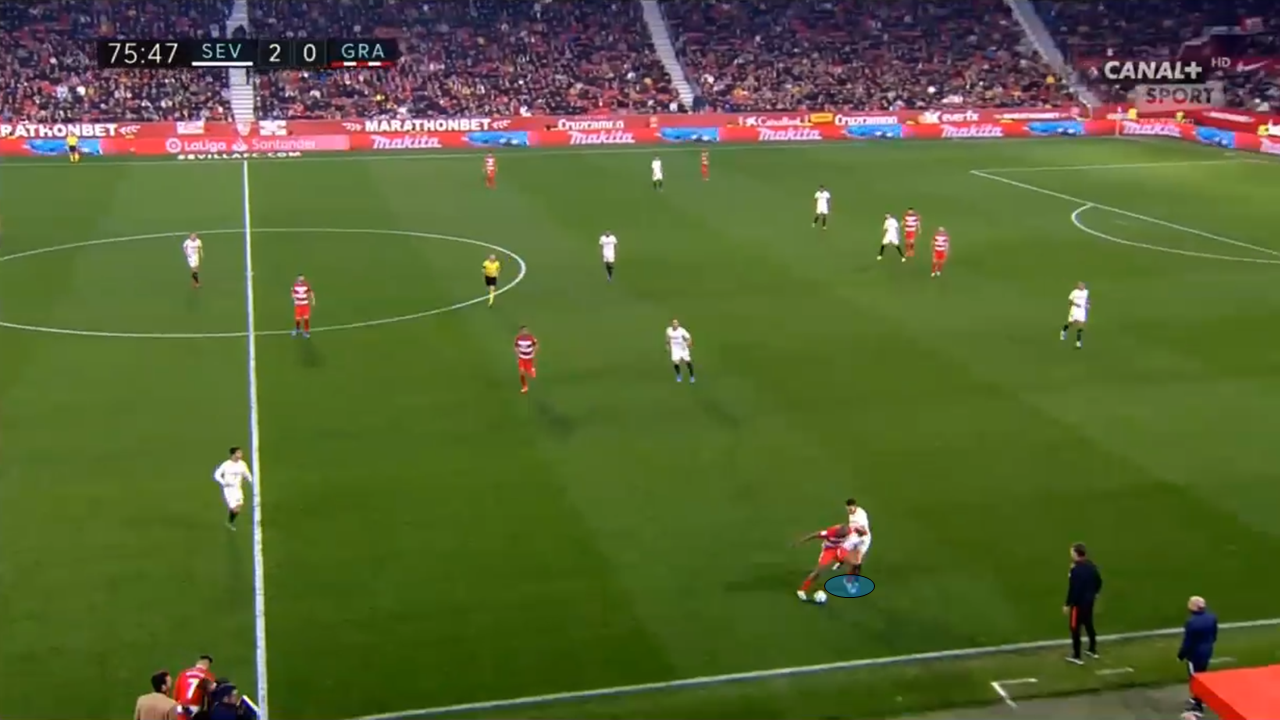 Here, Reguilón moves up high to press the opposition’s right midfielder instead of holding his position and letting his opponent run at him. In this situation, he manages to force him backwards, however, this mentality to press high can be exploited if he lets the opponent get past as there will always be a considerable amount of space behind him. 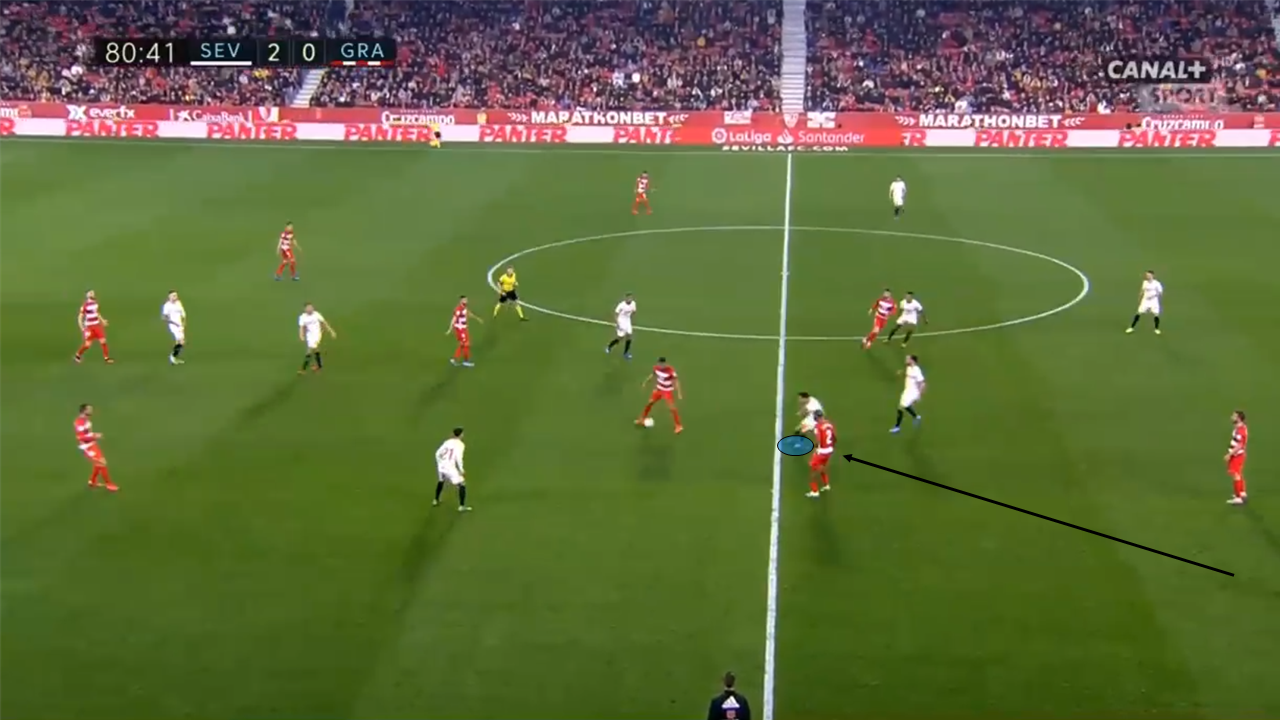 Once again, Reguilón steps up in order to press his opponent. 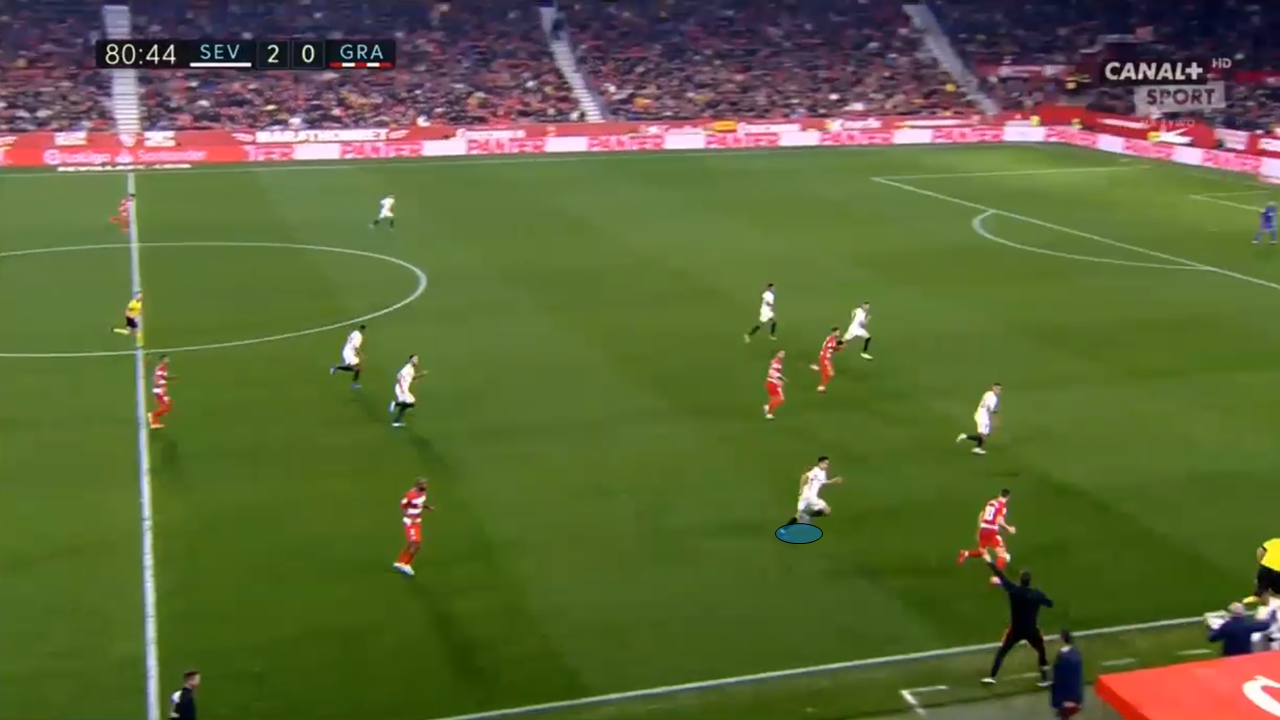 This time, however, he doesn’t step up quickly enough and Granada are able to play a pass in behind him. The consequence of this situation is that Granada’s wide forward is now able to drive at Sevilla’s centre-backs with the ball.

Sergio Reguilón has performed at an impeccable level this season, while some would even argue he’s been one of the top fullbacks in La Liga this season. This analysis has demonstrated how his impressive attacking contribution combined with his tenacious style out of possession makes him an ideal left-back choice for any club that implements a high-pressing, possession-based brand of football. If he can improve upon his final ball and his timing when pressing, there is no doubt that he can become one of the best fullbacks in Europe. 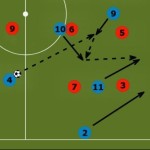