In this part of finding the best players from the Belgian Pro League, we will search for best offensive midfielders. This data analysis contains statistics from season 2019/20. We filtered players who spent most of their playing time as attacking midfielder and winger, played at least 600 minutes in the league. Because of the range of positions we need to analyze more statistics to have a clear view of which players are the most complete.

Belgian Pro League is a pool full of good offensive midfielders. Last summer we witnessed some transfers of wingers like Trossard, Djenepo, Danjuma and so on. All of them now play for English Premier League sides. The Belgian Pro League is a great development league which is an opportunity for clubs from better leagues to send their players on loan. Ligue 1 sides often benefit from sending their youngsters on loan to get more playing time.  At the end of this data analysis, we will mark players who are statistically the best in the league when it comes to attacking.

The first thing and most important from our offensive midfielders is how dangerous they are when close to the opponents’ goal. We will try to demonstrate that with shots paired touches in the box. Colour of dots will represent xG per 90 for each player. 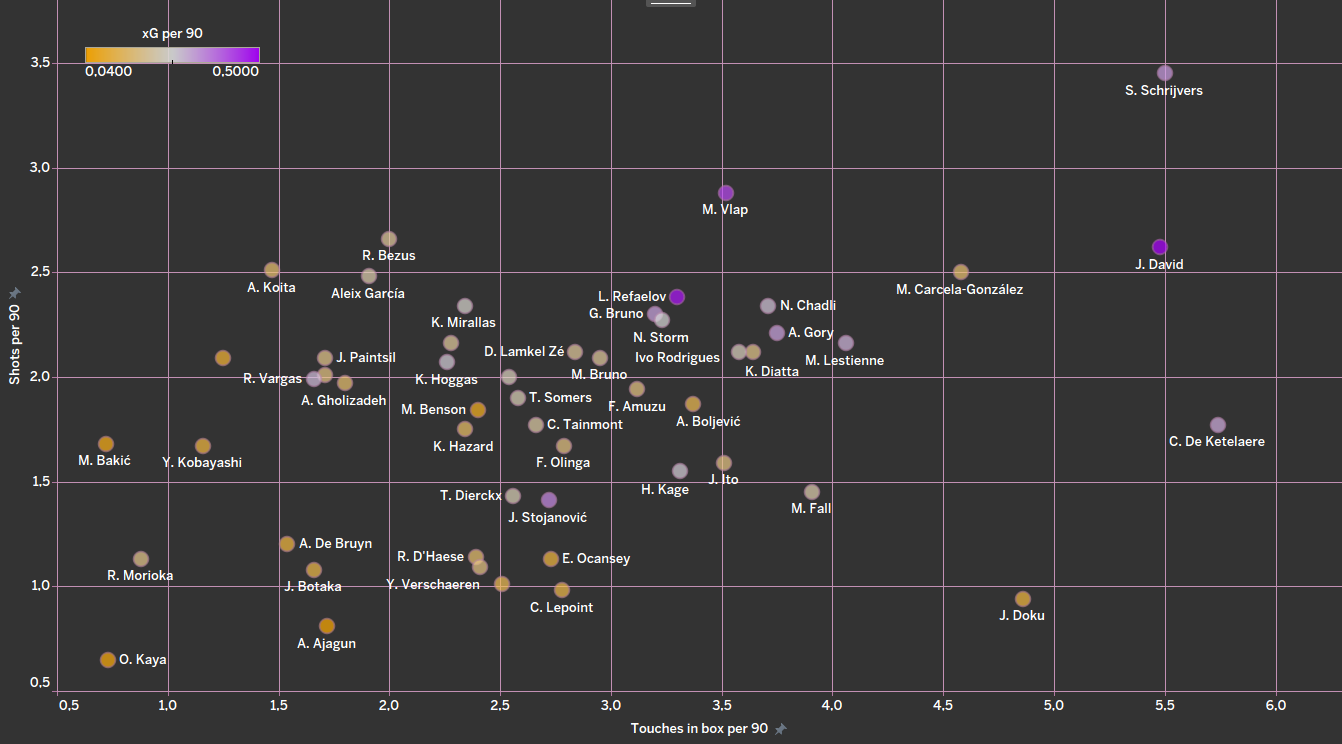 Graph above shows a few players that separated themselves from others.

Siebe Schrijvers from Club Brugge is having 5.5 touches in the box per 90 and 3.45 shots per 90. Versatile 23-year-old played a lot of positions this season, playing on the flank and as the second striker. Schrijvers is averaging 0.34 xG per 90 which is impressive and shows that he can be a threat when playing as centre-forward as well.

Jonathan David is this year Belgian Pro League sensation who plays for Gent. 20-year-old Canadian is averaging 5.48 touches in the box per 90 and 2.62 shots per 90. David averages highest xG compared to the others with exceptional 0.5 xG per 90.

Mehdi Carcela-González is a well-known player who played for a number of European clubs, playing Champions League football with Olympiakos and Benfica. This experienced winger is now part of Standard Liege. Carcela-González is averaging 4.58 touches in the box per 90 and 2.5 shots per 90. Given his 0.15 xG per 90, we can assume he is taking shots from longer distances and less-likely positions to score goals.

Michel Vlap is 22-year-old attacking midfielder playing for Anderlecht. Technically strong player who can score goals. He is averaging 3.52 touches in the box per 90 and 2.88 shots per 90. Vlap has impressive 0.42 xG per 90.

Lior Refaelov is a player that stands out with 0.48 xG per 90, second-best behind David. The 33-year-old veteran knows how to make an impact in the final third, scoring 11 goals this season. Refaelov is averaging 3.33 touches in the box per 90 while attempting 2.38 shots per 90. 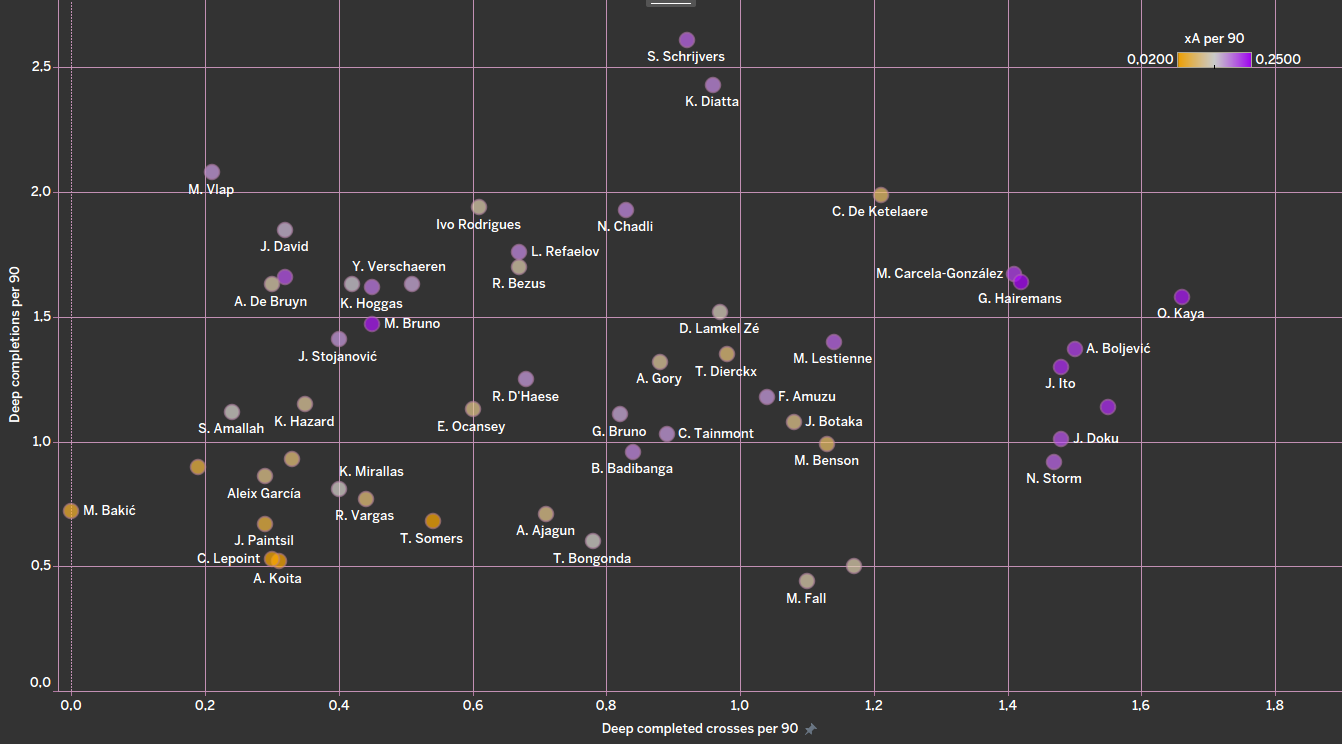 Carcela-González is averaging 1.41 deep completed crosses per 90 and 1.67 deep completions per 90. Moroccan is having 0.22 xA per 90 which is in the top 5 compared to the others.

Krépin Diatta is Club Brugge wide-midfielder who mostly occupates right side of the pitch. Senegalese international is averaging impressive 2.43 deep completions per 90 paired and 0.96 deep completed crosses per 90. Diatta performances this season caught bigger clubs attention. His xA per 90 is 0.18.

Jérémy Doku is the youngest player compared to the others in this analysis. The 17-year-old electric winger is Vlap’s teammate in Anderlecht. The youngster is averaging 1.48 deep completed crosses per 90 and 1.01 deep completions per 90. His expected goals per 90 is 0.21, one of the most creative wingers in the league.

Refaelov is averaging 1.76 deep completions per 90 and 0.67 deep completed crosses per 90. Not only he is getting into good chances to score goals, as well he creates good chances for teammates with 0.18 xA per 90.

De Ketelaere is averaging 1.99 deep completions per 90 while averaging 1.21 deep completed crosses per 90. With only 0.07 xA per 90, he is one of the lowest xA producers compared to the others.

Schrijvers looks fantastic in this section too. 2.61 deep completions per 90 is the best score on the graph paired with 0.92 deep completed crosses per 90. His xA of 0.2 per 90 is amongst the top 10.

Vlap is a fantastic facilitator, providing 2.08 deep completions per 90. His central role rarely offers him a chance to cross often and product of that is 0.21 deep completed crosses per 90. Vlap is averaging 0.17 xA per 90.

David is in the top tier in deep completions with 1.85 per 90. Similar to Vlap his centralistic role prevents him from crossing more. He is averaging 0.32 deep completed crosses. David xA per 90 is above average with a value of 0.15.

In this section, we will further describe players we highlighted based on data we evaluated. Some of their strengths will be mentioned in order to get more insight into their abilities.

Carcela-González shows great creativity with high xA per 90. He has 7.44 successful attacking actions per 90, only bettered by Doku and Diatta. Has a lot of touches in the box, but has to improve his shot selection in order to score more goals.

David made rapid progress this season. David can compete with strikers in xG per 90. If he improves his creative ability he will probably be a top player in years to come.

Schrijvers based on metrics we evaluated he is clearly the standout player. His ability to adapt to many offensive roles is a great sign of his football IQ.

De Ketelaere gets in good situations to score goals, but he rarely makes good chances for his teammates. His talent is huge and he is just 19-year-old, so we can expect him to thrive next season.

Doku is a youngster that has an impressive skillset. He is attempting a ridiculous amount of dribbles with 13.22 per 90(league-high), while 60.2% of them are successful. Addition to his dribbling is 5.4 cross attempts per 90 which is league-high value as well. Doku whips crosses with 28.75% accuracy.

Diatta is one of the league best dribblers with 60.27% success rate. Diatta creates a lot of chances for his teammates, but can score goals as well.

Refaelov has shown that his experience allows him to get into the right positions to score goals but to assist teammates as well.

This is the final section and here we will decide those who should be considered amongst the best offensive midfielders in the league. We decided to put four players on final shortlist, two who play mostly central and two wingers.

Siebe Schrijvers – The Club Brugge player has shown remarkable numbers this season. His mental abilities, decision making and anticipation help him get into good positions on the field. Having a lot of touches in the opposition box, a high number of shots and deep completions he seems like a fantastic offensive player. Transfermarkt values him at 4 million euros which is a bargain considering his numbers and his age. Further scouting could help us see which team could fit for Schrijvers. 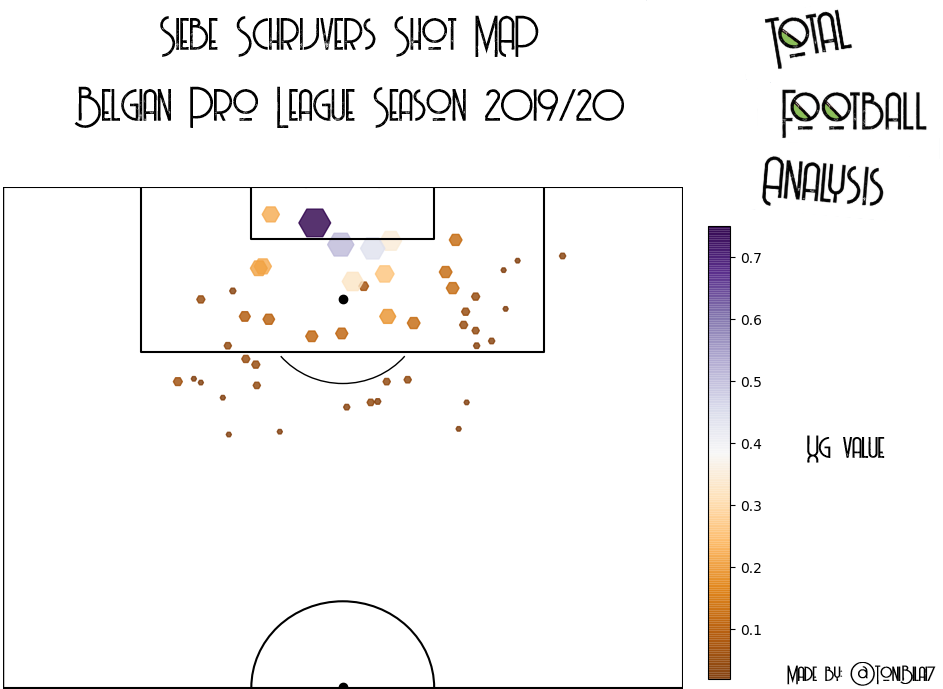 We can see that Schrijvers doesn’t hesitate to shoot from all positions which is why he has the highest number of shots compared to other players in this analysis.

Jonathan David –  The 20-year old Canadian is playing probably his last season in Belgian Pro League. His impressive performances in all competitions caught the eye of some bigger clubs who will try to sign as soon as possible. David’s playing style fits modern football constantly penetrating through the middle with the ability to score and create. He can play attacking midfielder, second striker and centre-forward. Arguably the best player in Belgium right now is valued at 22.5 million euros. 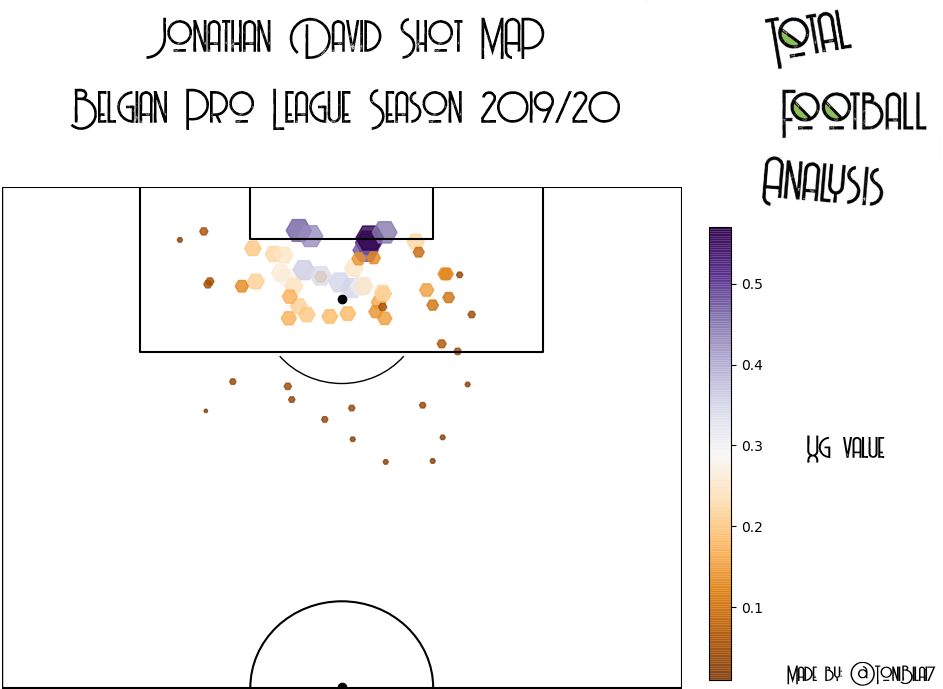 David gets in lot of chances near six-yard-box which is the reason why he has the highest xG per 90 compared to the others.

Mehdi Carcela-González – Moroccan experienced winger is above-average in almost every stat we analyzed. His number of goals and assists should be higher, but he creates a lot of chances for teammates. He needs to get in better positions to shoot because his xG is low, even with an above-average number of shots and touches in the box. His Transfermarkt value is 2.4 million euros which is fair considering his age.

Krepin Diatta – Highly-valued Club Brugge player has all abilities needed to be a top winger. Dribbling and pace are making him hard to mark. He scored six goals this season supported with three assists. Like David, many clubs from better leagues are looking to sign him, so this could be his last season in Belgium. Transfermarkt values him at 19 million euros, but his fee will probably be larger given his long-term contract.

This data analysis gave us insight into the best offensive midfielders playing in the Belgian Pro League based on statistics. Aside those four on final shortlist, we recognised some talented players in Doku, De Ketelaere and Vlap who have the capacity to become great players.