Frank Lampard’s Chelsea have shown signs of growth and development in a season that was expected to be a write-off given the transfer ban. Through his excellent man-management and integrating youth into the side, the Blues found themselves sitting in fourth place before the enforced suspension of the Premier League.

Looking ahead at the summer transfer window, Chelsea are in the market for a new left-back and goalkeeper after unconvincing performances from their current options. Specifically at left-back, Marcos Alonso and Emerson have been underwhelming for parts of the season, forcing Lampard to switch Cesar Azpilicueta over to left-back once again. Neither has shown enough to appease Lampard’s worries, especially given Chelsea’s defensive frailties this season.

Lampard typically employs the 4-3-3 and 4-2-3-1 as his primary systems of choice but has on occasion opted for the 3-4-3 formation that involves wing-backs. Here is where Alonso has shone, best but Lampard has only used this system against the bigger sides. Lampard will probably opt for the 4-2-3-1 for the next campaign. His two central midfielders are much more possession-hungry and the three attackers behind the striker tend to tuck inside. In Jorginho and N’Golo Kante, Chelsea have a functional and effective duo with a mixture of passing, pace, and power between them. The same can be said of Mateo Kovacic, Ruben Loftus-Cheek, and Ross Barkley when plugged in. While Jorginho will attempt to create from deep, and two inside forwards running the channels, it comes down to the full-backs to provide width and an alternative source of attack so given the importance of this position, it is imperative Chelsea find the best option that fits Lampard’s style.

Through data analysis, we will aim to identify the best possible replacements for Alonso given that he is likely to be moved on with one year left on his contract and inability to play in a four-man back line. We will later look to provide a tactical analysis on these players to further analyse their play style and ability. For the purpose of this analysis, we will filter our data to players under the age of 24 and played at least 700 minutes from across Europe’s top five leagues as it is likely that Chelsea’s eventual find will originate there. We will use four comparison metrics to find our full-back of choice.

Given Alonso is the full-back to give way, we will need a player who is proficient at attacking but much more diligent when it comes to his defensive duties. Alonso has a knack of scoring important goals using his height, power, and ability to arrive in the box late. But given that he’s an exception to the rule, we will focus on chance creation and progression as our key elements as Lampard will use them primarily as crossing outlets. The two metrics I have chosen use are crosses vs crosses accuracy % and progressive runs per 90 vs deep completion passes per 90 with Expected Assists (xA). These two metrics should give us an all-round indication of the type of left-back we are in search for. 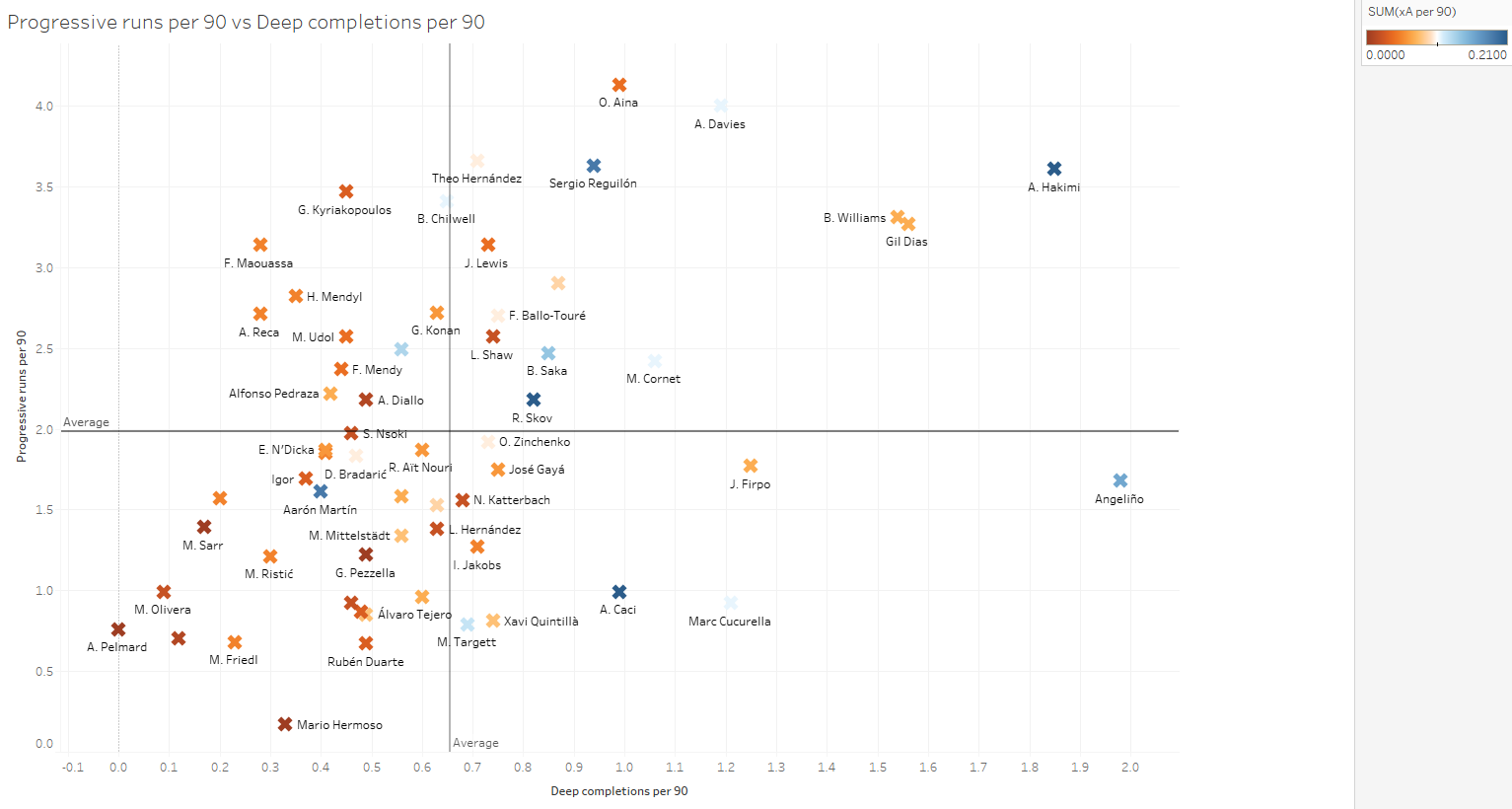 The first set of data metrics we want to use is deep completion passes per 90 vs progressive runs per 90 to highlight the players’ ability to affect the final third through ball progression and providing frequent passes within 20 meters of the opponent’s goal. This also includes xA to give us a complete understanding of the player’s attacking potential. Alonso and James have been a major outlet for Chelsea in terms of ball progression and getting balls into the attacking midfielders and striker. For reference, Alonso averages 1.95 progressive runs per 90 and 1.37 deep completion passes per 90 with an xA of 0.13 per 90. Knowing this will allow us to filter out the most prominent players based on these metrics for selection. We will be identifying players in the top right quadrant because they qualify as the best performers in these metrics.

The first player to stand out Leicester City’s Ben Chilwell – a name that Chelsea have been heavily linked with in the past. Chilwell averages 3.41 progressive runs per 90 and 0.65 deep completion passes per 90 with an xA per 90 of 0.11. Next, we have Ola Aina, another name familiar to Chelsea having previously signed for their under 11s in the past. He moved to Torino last summer on loan and has permanently transferred there after an impressive spell at the Italian side. The Serie A defender averages 4.13 progressive runs per 90 and 0.99 deep completion per 90 and an xA per 90 of 0.04. 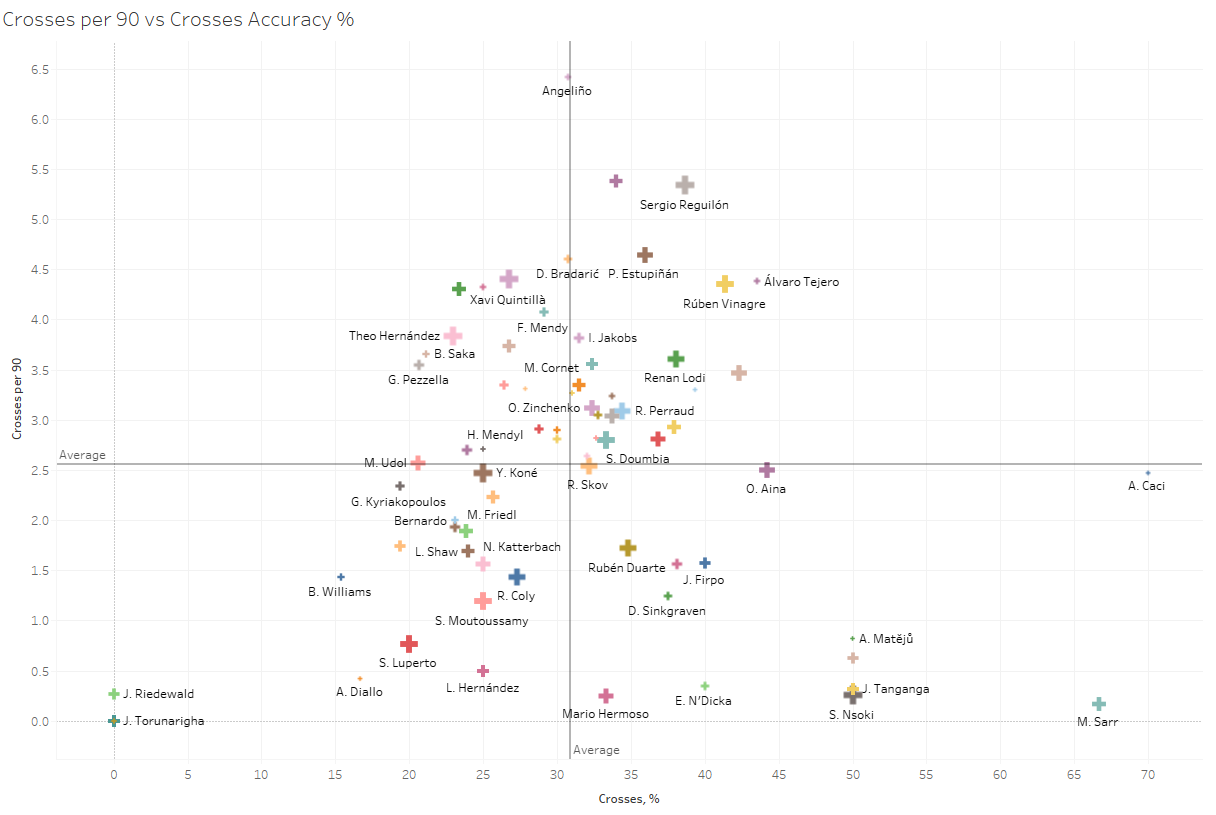 Now we will look at the players’ output in terms of getting crosses into the box. This comparison will help us understand their ability to cross and how accurately. This metric is one of the most important attacking attributes for any full-back given their position and this is especially true with Chelsea’s use of the wide areas. Chelsea rank 5th in the Premier League for most crosses and 11th amongst the top 5 European Leagues. Alonso averages 3.51 crosses per 90 and 25% accuracy rate.

Now we’ve identified a few players that could possibly be looked at closely by Chelsea, we will take a closer look at each player against Alonso to see how each one fares. 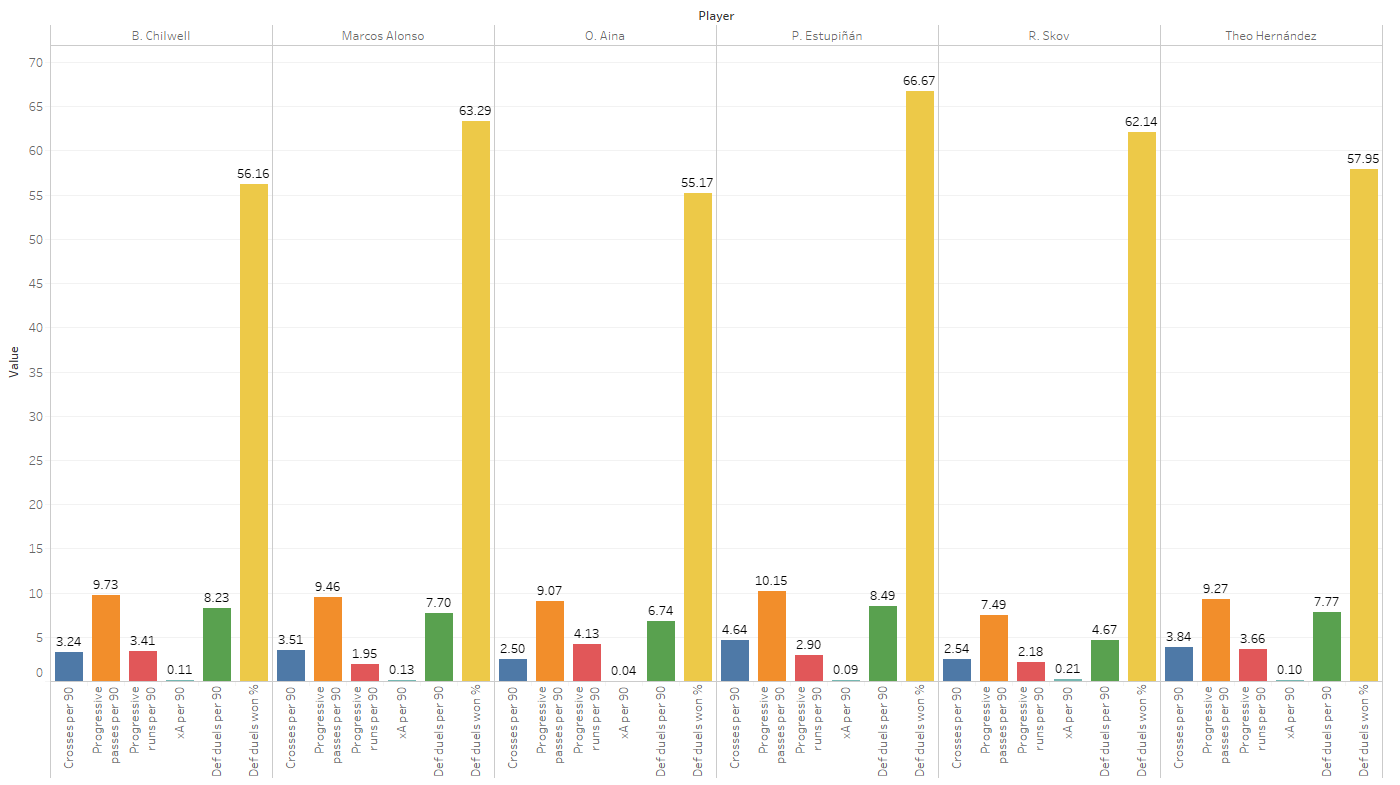 We can see that Alonso doesn’t come first amongst these metrics. They include the ones we’ve discussed earlier to see how they do side by side. Each player has been selected based on their attacking attributes to match Chelsea’s style of play. Defensive attributes have been added to this comparison to narrow the search to a player with good defensive skills. The context behind these statistics should be explored to give us a better view of the players.

Chilwell seems to be an excellent option for Chelsea because of his experience in the Premier League with 3.24 crosses per 90, 9.73 progressive passes per 90, 3.41 progressive runs per 90, and 0.11 xA per 90. His 8.23 defensive duels per 90 and 56.16% defensive duels won success rate show his defensive ability. These high figures can be associated with Leicester City’s rise in the league this season, propelling them into the top 4 with Chilwell being a key member of Brendan Rodgers’ attacking and defending lineup. They rank third in the least amount of goals conceded (28) and third in most goals scored (58) in the Premier League. 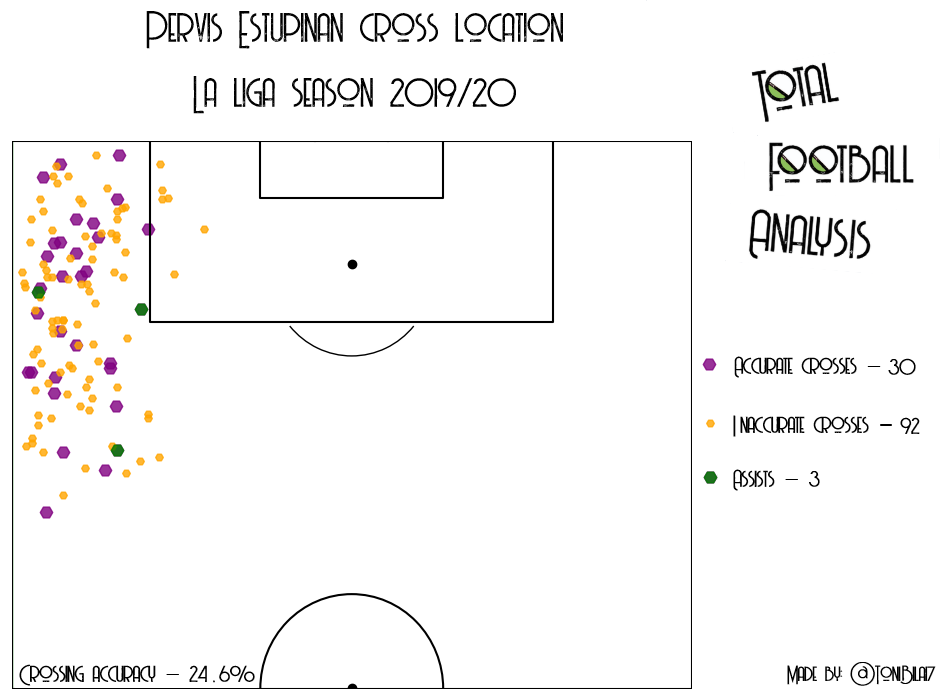 Aina is probably the easiest target because of the rumoured buy-back clause in his deal with Torino. The full-back registers high numbers in progression statistics but lacks output in terms of his crosses per 90 and xA per 90. Torino have struggled defensively, conceding 45 goals in Serie A this season, as well as offensively with 28 goals scored. This could be attributed to his low xA per 90 and fewer crosses per 90. The higher defensive statistics can be correlated with the need to defend more, keeping the number of goals they scored in mind.

Skov seems to sit in the middle of the aforementioned players. His high defensive duels won % shows effectiveness in defending and is able to progress play for Hoffenheim but remains on the lower end of the spectrum. The Bundesliga club ranks 3rd in the most shots faced (348) and 3rd in shots blocked (80). Both these statistics show the barrage of attacks that come against Hoffenheim, and could very well be a useful defensive addition to Chelsea. The below map indicates successful defensive actions include won challenges, interceptions, ball recoveries and free-ball pickups while the red crosses represent lost duels. We can see a healthy number of duels won with a 60% plus success rate giving us an indication of his defensive ability. 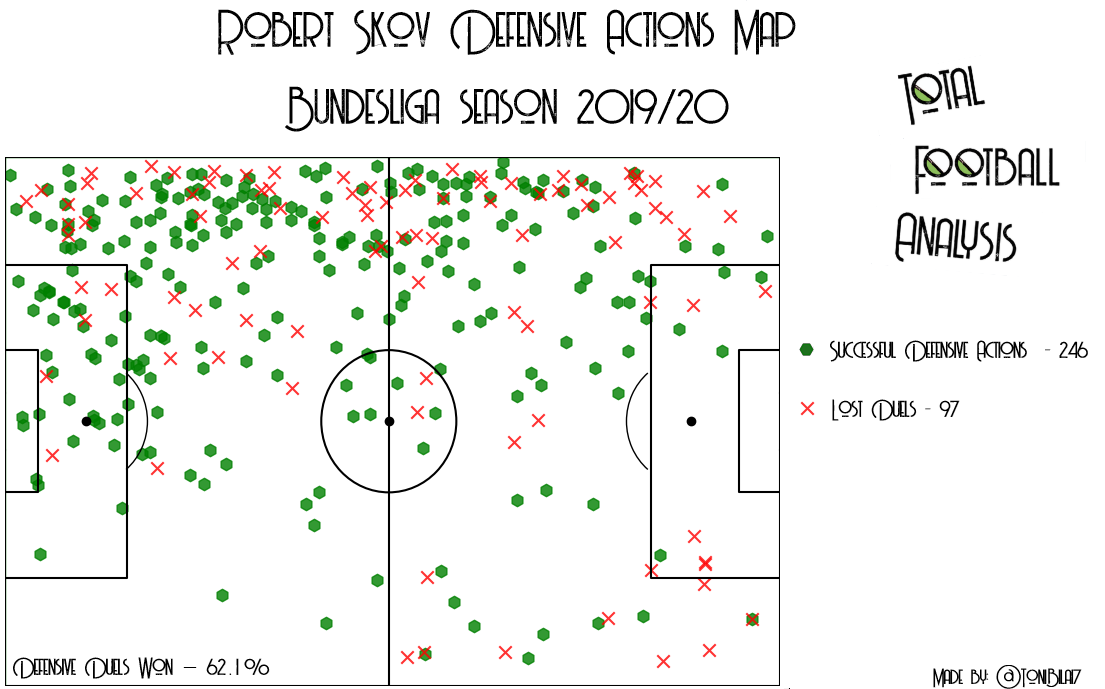 Hernandez is a very good attacking full-back which is reflected in his above average results above. He also averages third in his defensive qualities amongst the names above and at 22 years of age, could grow in a more physical league. He ranks 28th for the most crosses per 90 minutes at 3.84. 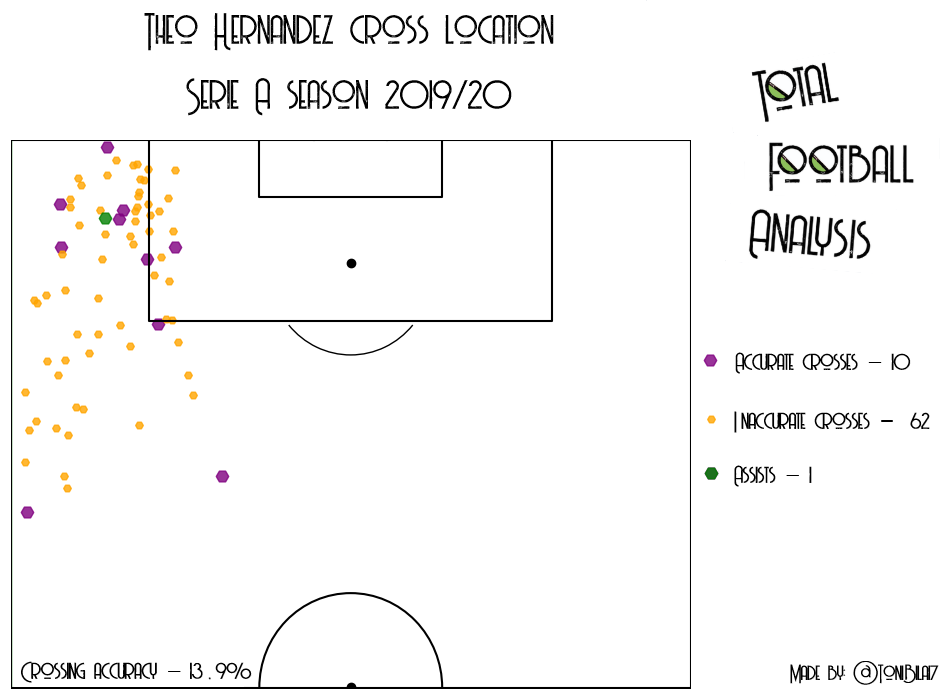 We identified and shortlisted five young players who could possibly be considered by Chelsea. Usually, we would create scout reports for each player involved and further analyse their strengths and weaknesses to determine whether they are a good fit for the club or not.

If I had to pick two players from the final shortlist, the first that stands out to me is Chilwell. The defender is at the right age and experience to slot straight into Lampard’s side and would add to the English contingent at Chelsea. However, the player is highly valued by Leicester City and the fee could prove to be a stumbling block.

In that case, my second choice would be Hernandez. The Milan full-back would represent a player that has room to grow and is an attack-minded player who can improve Chelsea’s attacking threat. His defensive statistics aren’t too bad either. He has the potential to replace Alonso’s goal-scoring due to his five goals this season but will need to improve on his output of two assists. Overall though, he would represent a significantly cheaper transfer than Chilwell.