The second leg of the CONCACAF Champions League round of 16 matchup between Montreal Impact and Saprissa played out at Stade Olympique in Canada on Wednesday night. The Impact impressed in the first leg in Costa Rica, going ahead on two goals from Orji Okwonkwo and new signing Romell Quioto before Saprissa’s Johan Venegas and Ariel Rodríguez equalised. This tactical analysis will examine the styles of play between the two sides in the second leg and dissect how Montreal were able to fend off Saprissa’s attack to secure advancement in the tournament. 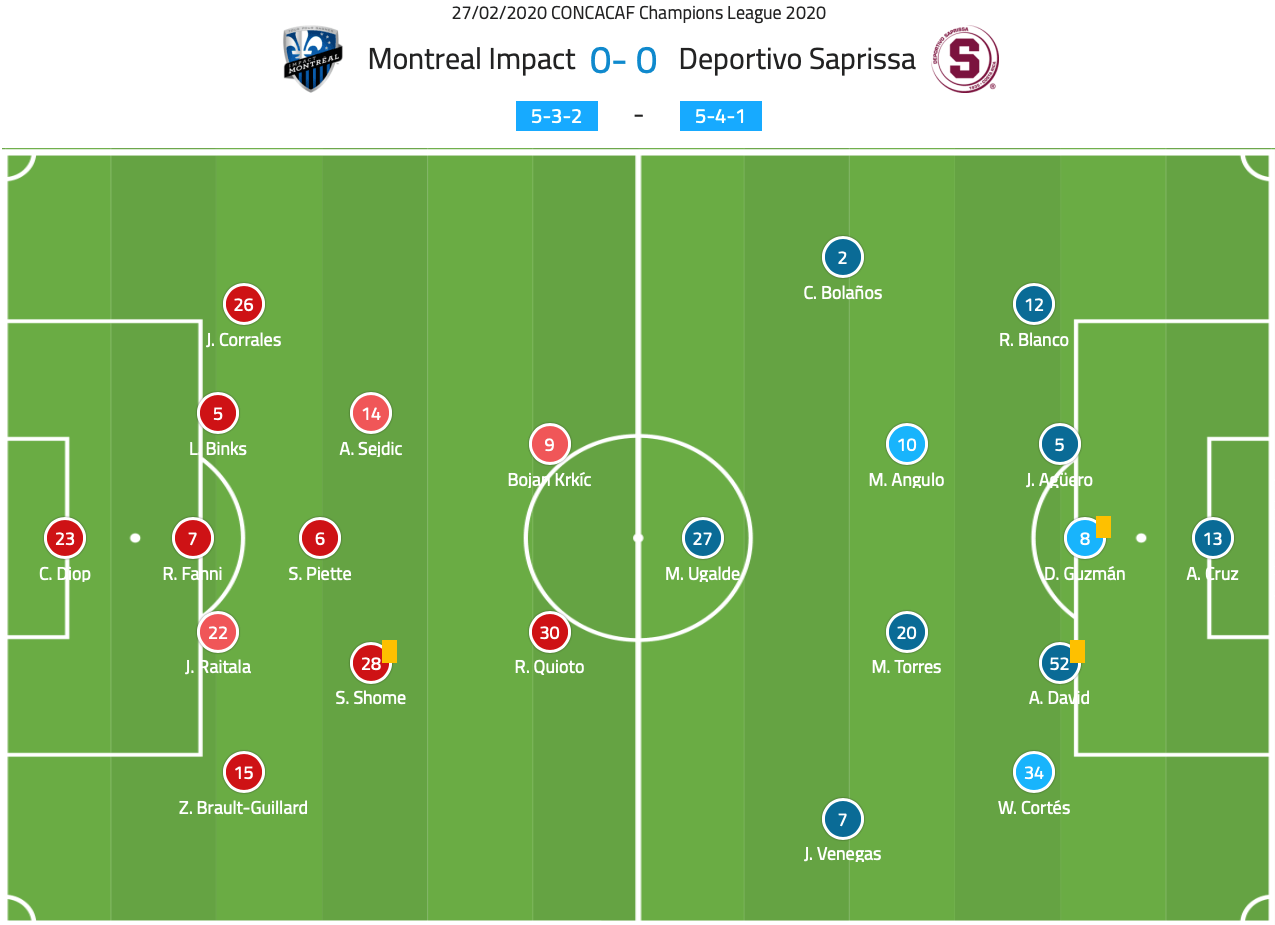 Montreal’s new manager Thierry Henry, the legendary former Arsenal striker, sent out a lineup and tactical game model somewhat similar to that of the first leg. Clément Diop started in goal for the second straight match after only starting eight matches in all competitions over the past two years for the club. Jukka Raitala and Rod Fanni began as centre-backs alongside new signing Luis Binks who started at centre-back with the usual starter Rudy Camacho out with an injury. Zachary Brault-Guillard and Jorge Corrales completed the defensive line in the back five/back three formation as the wing-backs. Shamit Shome, Samuel Piette, Amar Sejdic started in the midfield line, while former La Masia graduate Bojan Krkić started in the spaces around striker Quioto.

With Montreal Impact holding the away goal advantage from the first leg, Henry was content with prioritising defensive actions. His side formed a defensive block in their own half, limiting Saprissa’s comfort on the ball in said half. 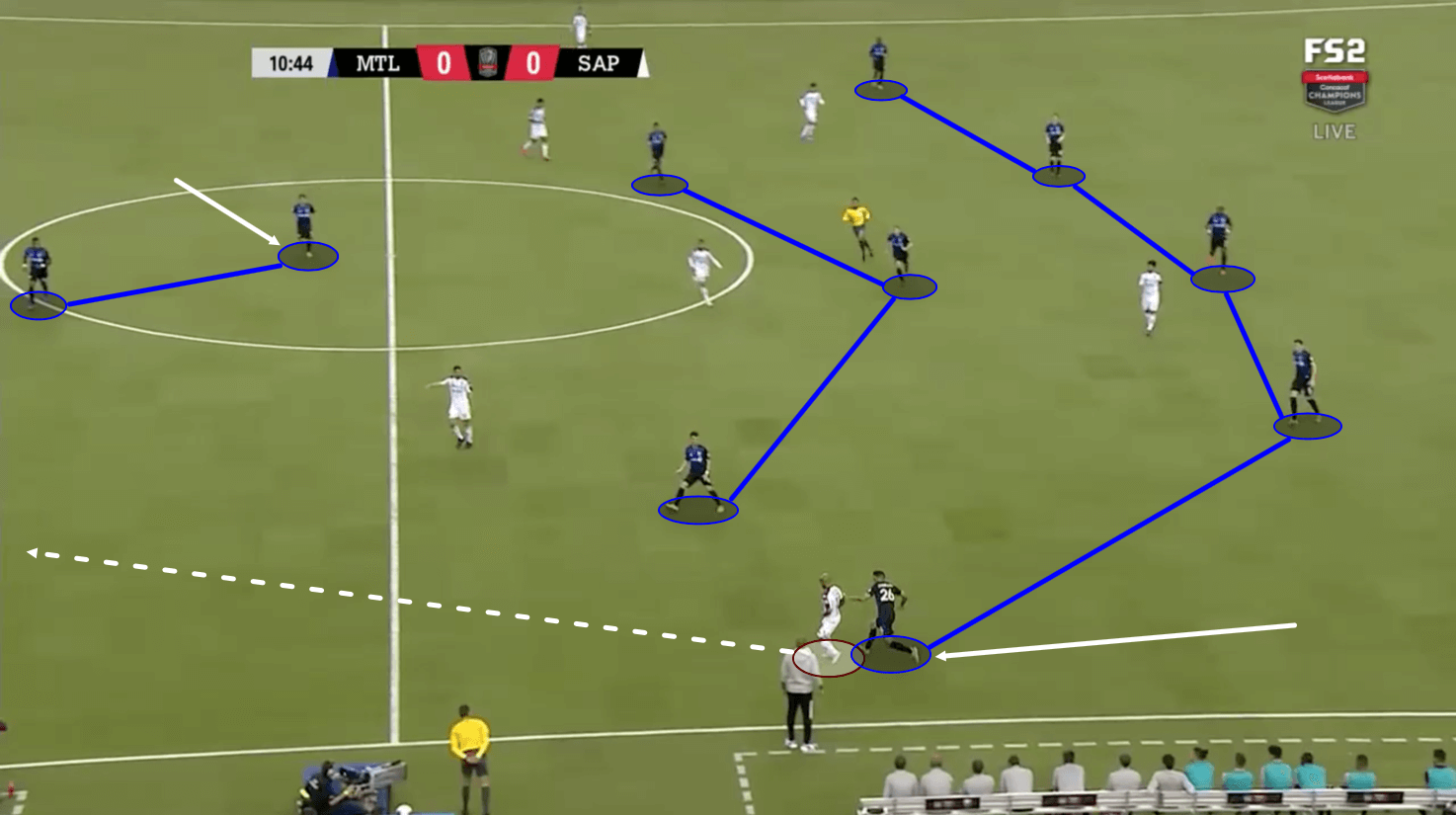 In the early scenario above, we can easily make out Montreal’s defensive shape. Slight pressure from Corrales forces Blanco to pass the ball back into Saprissa’s defensive half. Also, note the fluidity of Krkić’s positioning. He was often allowed the freedom to move around the front lines during the match, and this freedom is likely to be given to him throughout the course of the MLS season.

In addition to Montreal’s pressure in the defensive half, they also marked the opposition well. This marking frequently halted Saprissa’s ball progression. 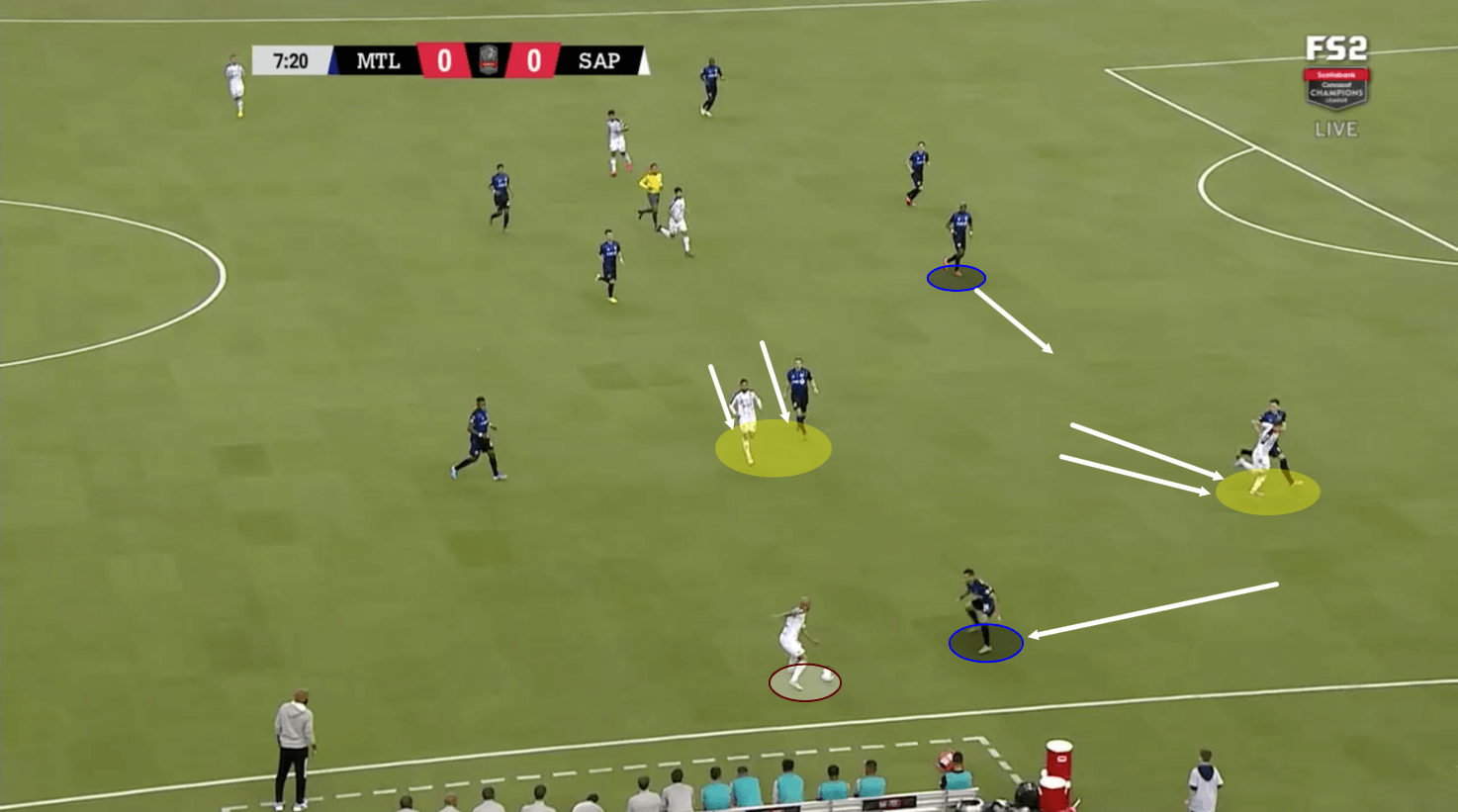 Here, Blanco again has the ball down the right touchline and into Montreal’s half, and again Corrales presses him. Often when a full-back comes out to press there’s a short window in which the space behind them will be unoccupied, but with Montreal satisfied with sitting in a back five, the left centre-back is able to smoothly shift over and cover that space without leaving space open in the centre of the back line. With Piette also doing well to mark his man in midfield and cover the progressive passing outlet, Blanco has little choice but to pass back towards his own back line and reset possession again.

Additionally, Montreal did well to block off passing lanes and intercept Saprissa’s passing attempts. The interception map below perfectly illustrates Montreal’s general defensive positioning, with many of their 42 interceptions in their own defensive third, including Corrales’ match-high seven interceptions. 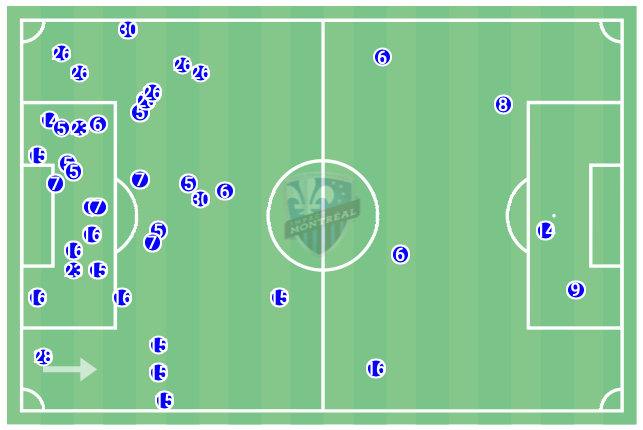 These stout, organised defensive tactics and movements were the most commonly occurring actions throughout the match, as Saprissa struggled in their attacking buildup.

Saprissa obviously played with the intention to possess and attack heavily. The three-time CONCACAF Champions League winners needed a goal to advance, but every opportunity to advance possession was met with Montreal’s defensive numerical superiority. 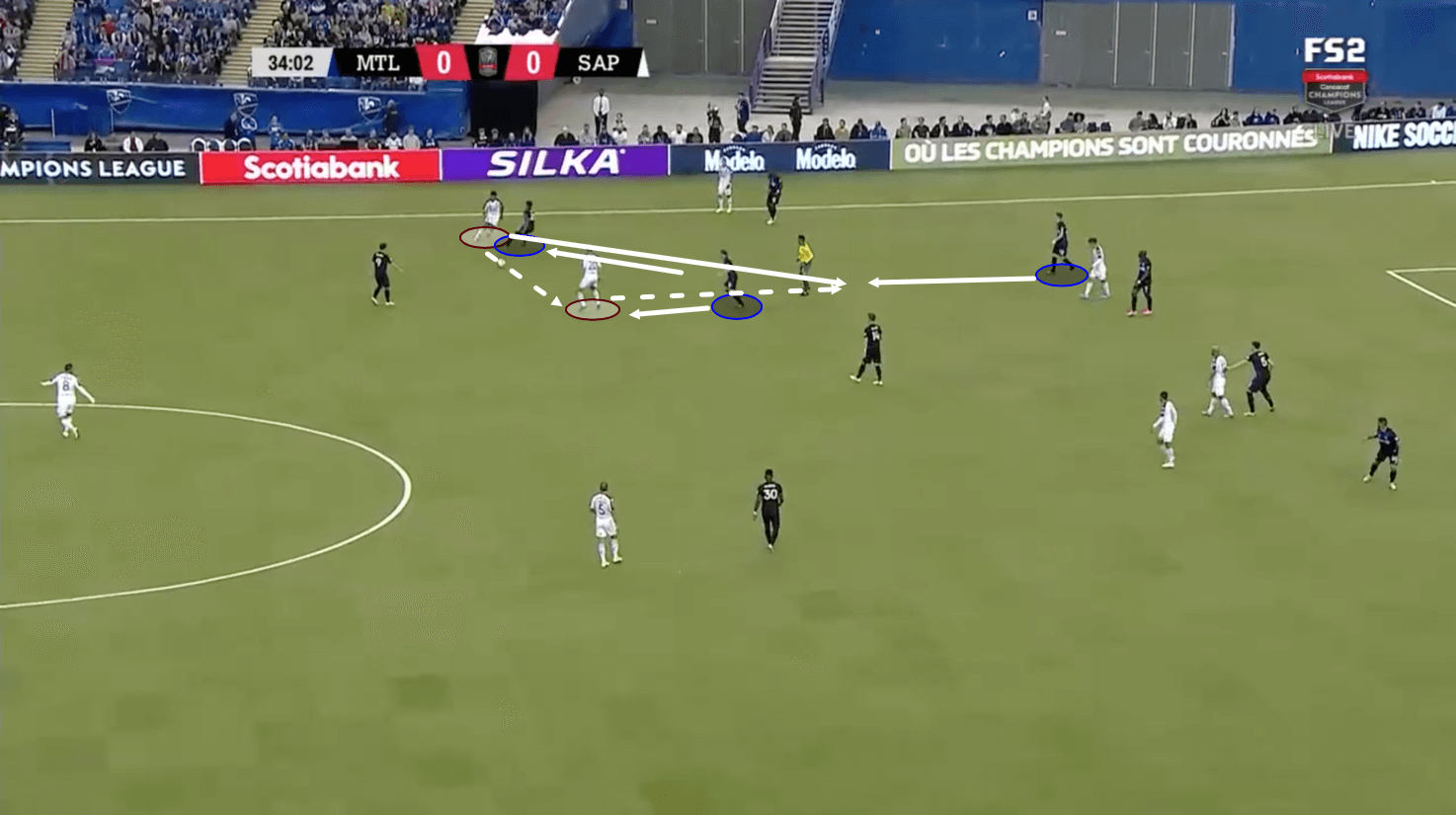 This is an excellent example of Saprissa trying to get through Montreal’s defending centrally. Venegas receives the ball wide, pulling out the wide midfielder Shome. After playing a quick one-two passing move with Torres, Shome and Piette’s movements result in a rare spatial opening behind Montreal’s midfield line. However, with five defenders still in front of the ball, club captain Raitala is comfortable enough to press Venegas upon completion of the offensive manoeuvre. This press results in a poor pass from Venegas, which falls harmlessly to Diop.

In the second half, Saprissa increased their progression through the wide areas in attempts to create crosses. 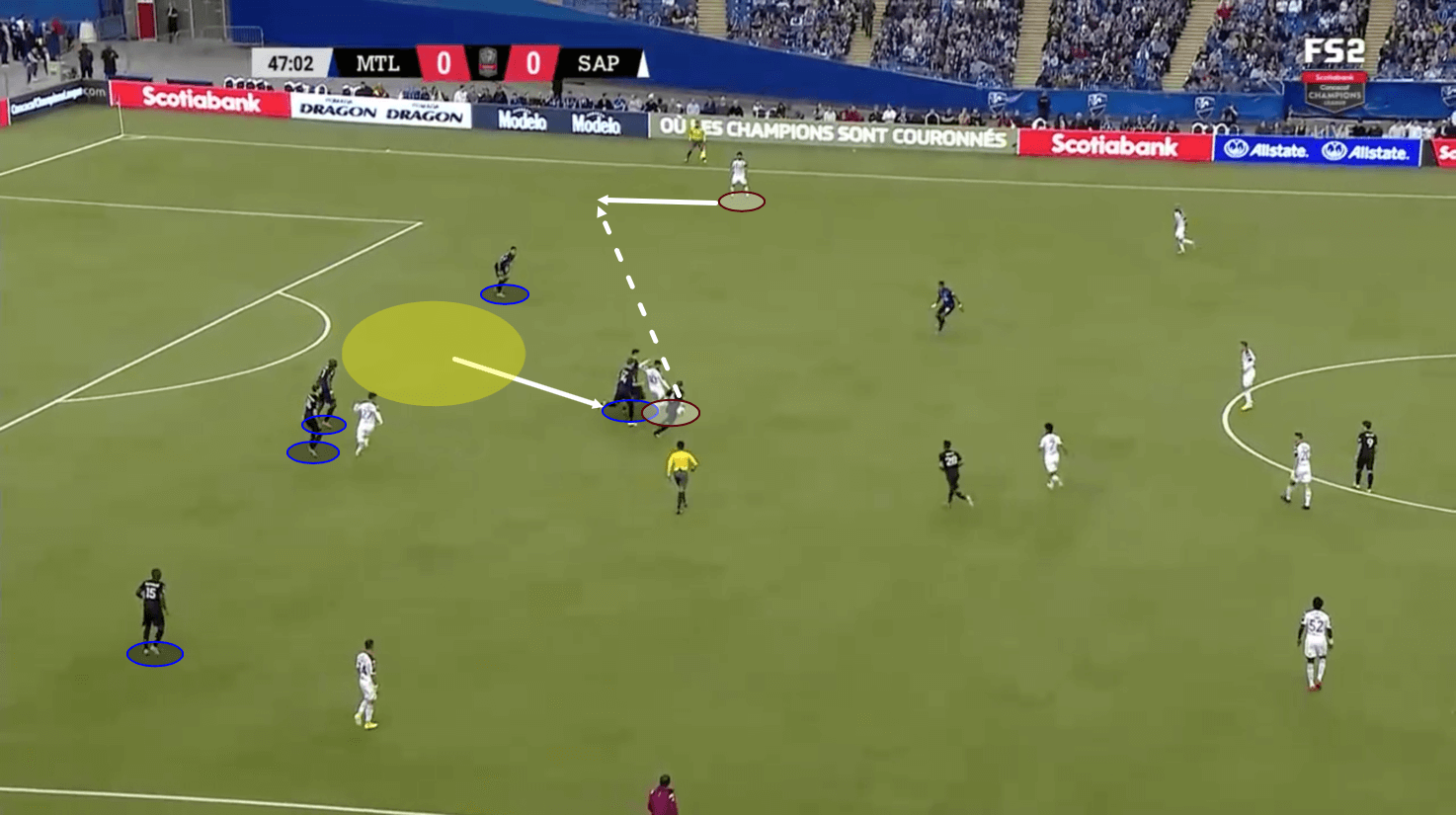 The picture above shows one of Saprissa’s efforts to create via a cross. Angulo, on the ball in the central attacking area, draws the left-centre-back Binks forward. Angulo is able to relieve the pressure by passing the ball wide to Bolaños. This temporarily created a hole in Montreal’s back line, but neither the cross nor a potential receiving player was able to reach that space. 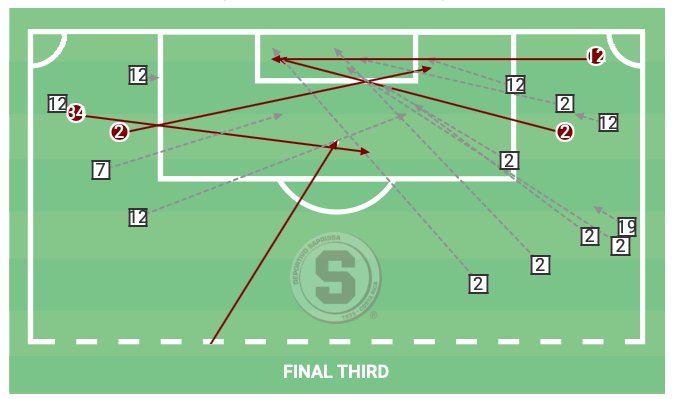 Of Saprissa’s 18 crosses, only five were accurate, and only two of those were met inside the six-yard box. The Costa Rican side found it difficult to create in attack despite using a number of various methods. Of their 12 shots, only two were on target. Credit goes to Montreal’s defensive discipline.

While the home side continued to limit Saprissa’s attacking success, Montreal’s attack began to push more aggressively down the pitch. Krkić was quieter in this match than he was in the first leg, simply for the reason that he is primarily utilised in attack. In that first meeting, he was positioned as a false nine, while here he was more often used as a cog in the front line pressure.

When Montreal were able to attack, however, they attempted to do so through the wide areas. Saprissa’s offensive concentration may have been the reason for their relatively unorganised defensive effort, and there were moments in which they allowed ample space for Montreal to progress. 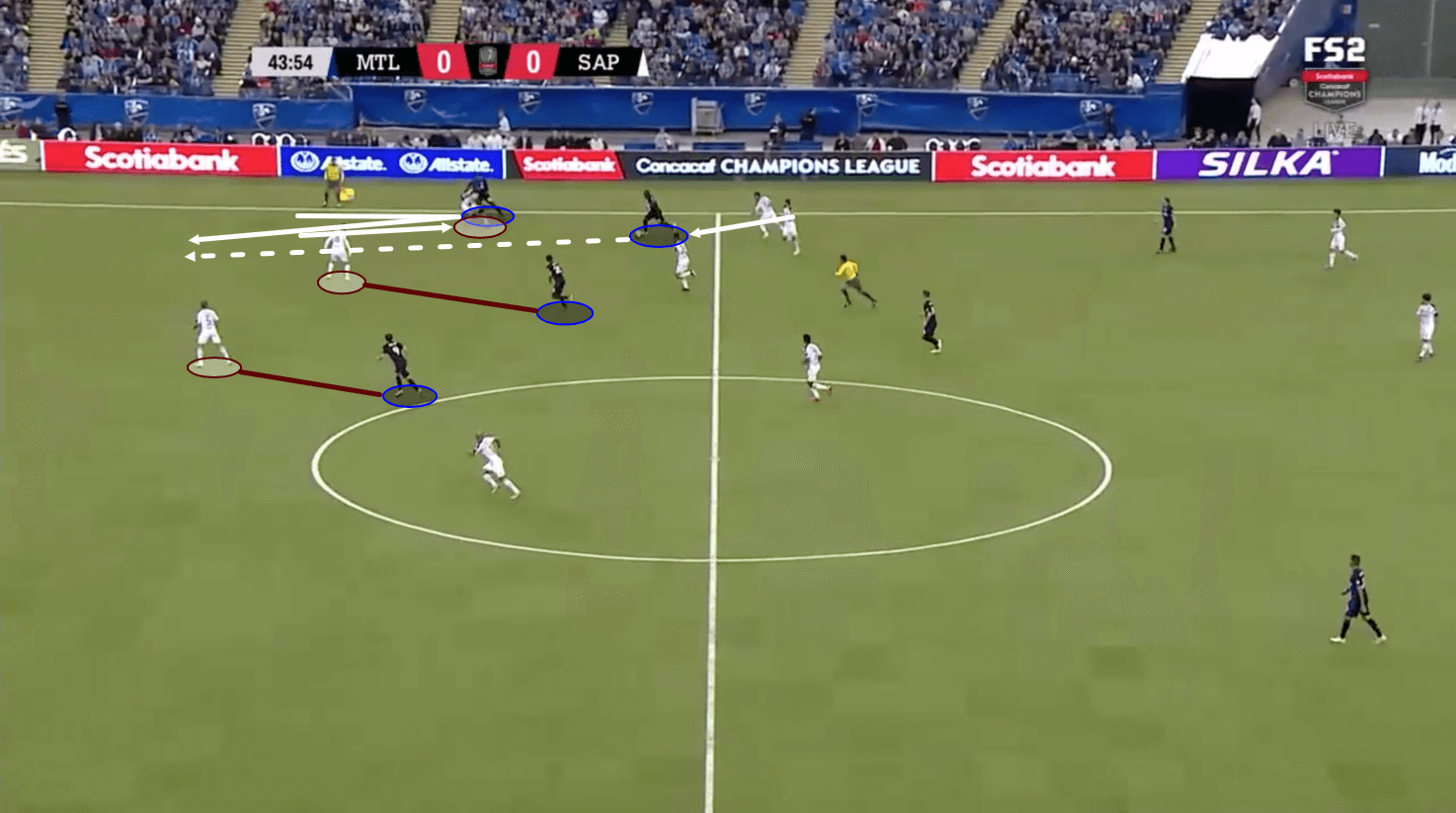 This example above resulted in Montreal’s best opportunity to open the scoring. After Brault-Guillard dribbled past a defender in the wide area, Quioto dropped back and wide, with David following him. Quioto then sharply turned his run back towards goal, successfully getting behind the defender. This lack of concentration from Saprissa gave Brault-Guillard space to complete a line-breaking pass, and with the other two defenders focused on the other two attackers near the action, Montreal wound up temporarily with a 3v2 situation. Quioto dribbled the ball into the box before passing it inside to a running Shome, who’s shot was saved by keeper Aaron Cruz. 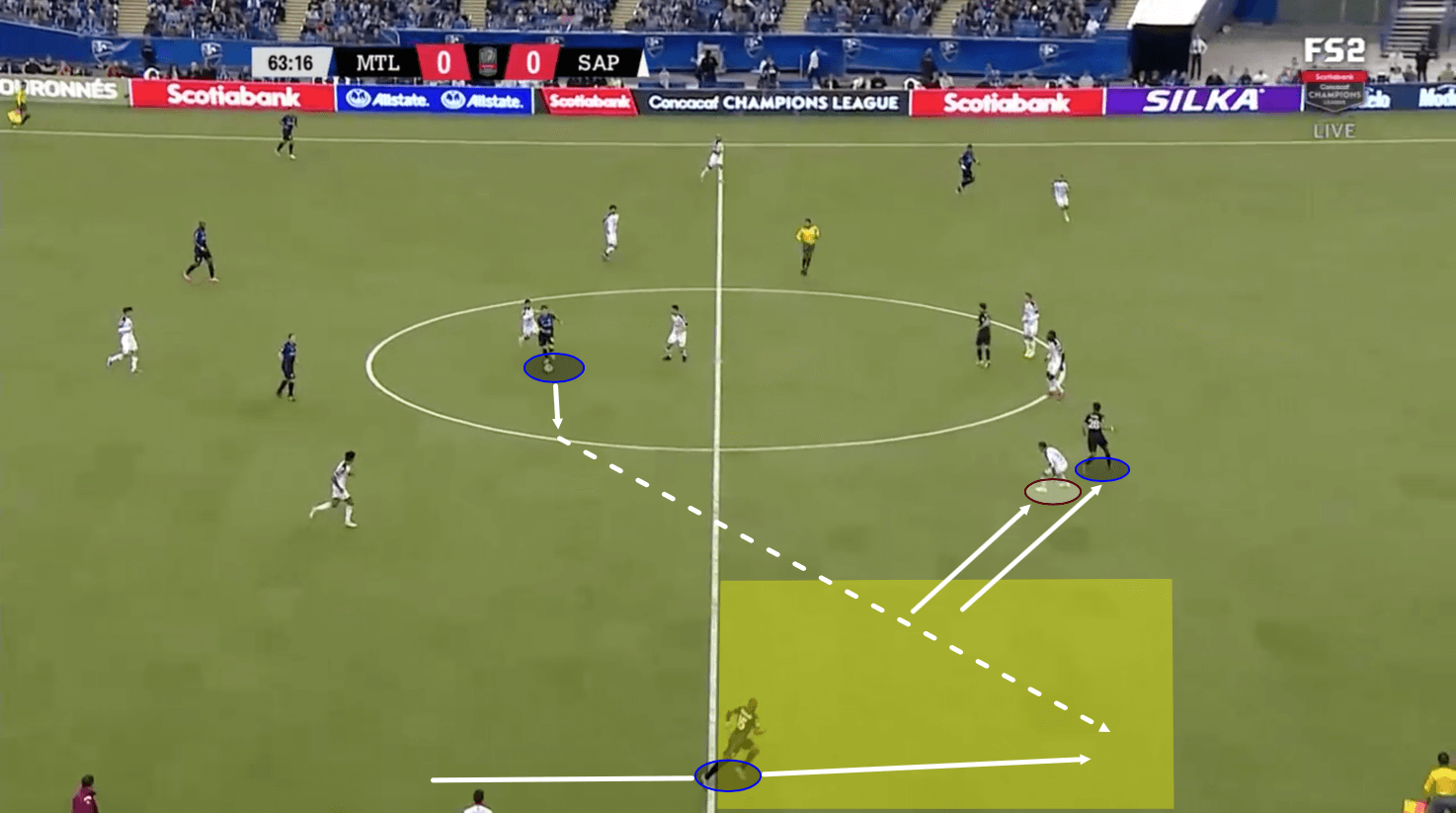 Here is another example which shows Saprissa’s lack of discipline in defence. While Sejdic is controlling possession in the central space, Shome pulls Cortés forward and inside. With Venegas forward in the attacking spaces and the rest of Saprissa’s players closer to the far side of the pitch before the switch of play, Brault-Guillard has a large area in which to advance past Saprissa’s lines and receive a long pass.

Another tactical shift that occurred in the second half was the slight change in defensive structure. Henry shifted his side into a 5-4-1, potentially due to Raitala being forced off shortly after halftime with a broken leg. In this shape, the ball-near midfielder applied pressure on the possessor, which often was enough to force frantic decisions from Saprissa. 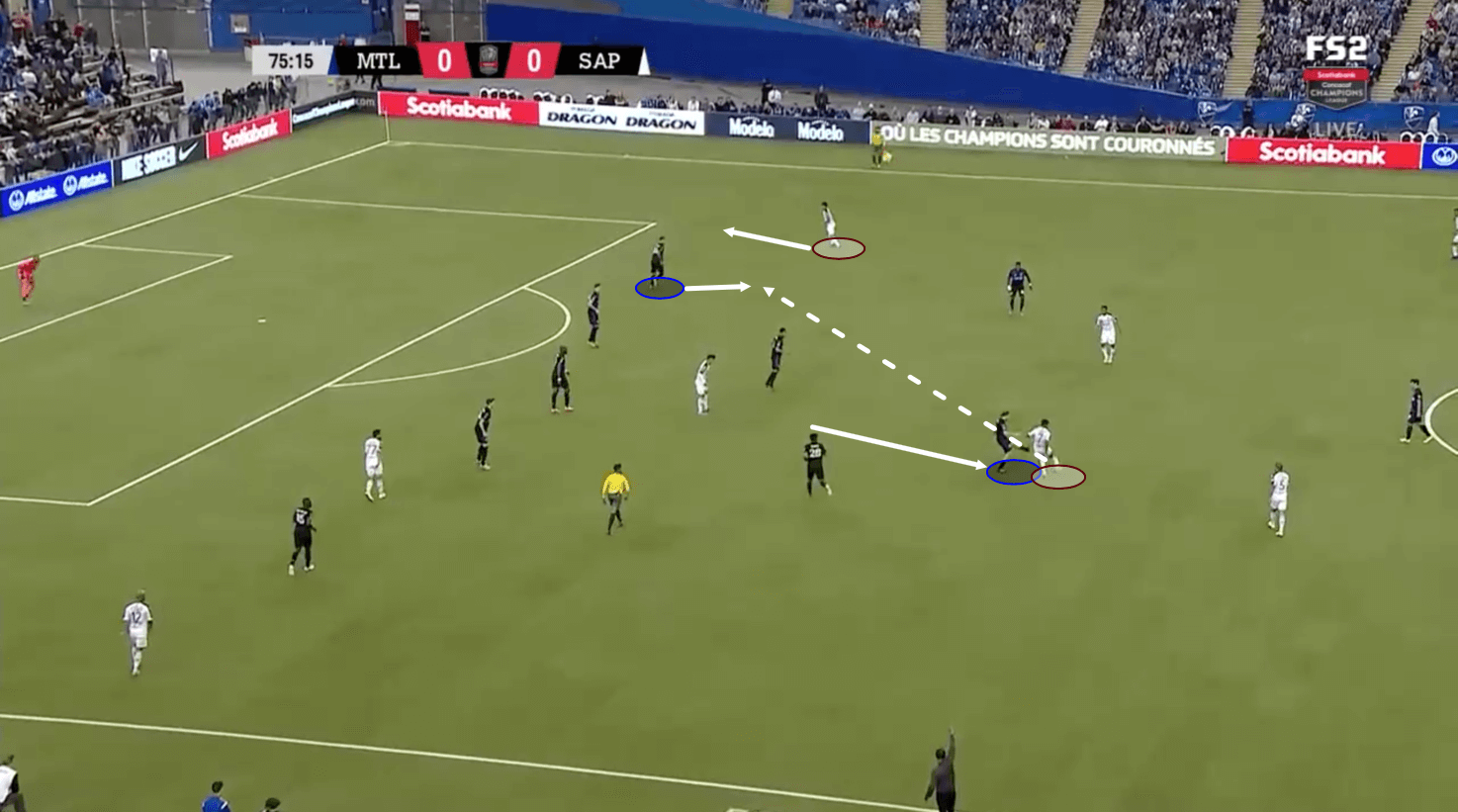 In this case, Piette pressed Venegas after the World Cup veteran carried the ball inside from the left. This pressure was enough to force a quick wide diagonal pass towards Bolaños, which Corrales was able to easily intercept thanks to his disciplined positioning.

It wasn’t the most tactically complex match, with Montreal implementing a clear defensive focus for a vast majority of the game. The minuscule xG scores of 0.17 for Montreal and 0.68 for Saprissa prove the visitor’s struggle to create quality attacks and the host’s success in preventing them.

Montreal Impact headed into the match with a clear gameplan via analysis, and they executed. Their defensive organisation and mechanisms along with their usage of aggressive wing-backs were enough to deny Saprissa any quality possession or chances. Montreal will look forward to starting their MLS season with confidence and advancing in this tournament. The Canadian side has reached the CONCACAF Champions League Final only once, losing to Club América in 2015. Saprissa will shift their focus on winning their domestic Liga FDP, in which they are currently tied for first place on points with rivals Herediano.