In this tactical analysis, we will take a look at the defensive tactics used by Augsburg. Furthermore, the analysis includes Borussia Mönchengladbach’s build-up and how Augsburg tried to use a similar way to play out from the back. Also, we will look into the formation change Mönchengladbach made after the break. Lastly, we look at how the tactical change opened up the game. 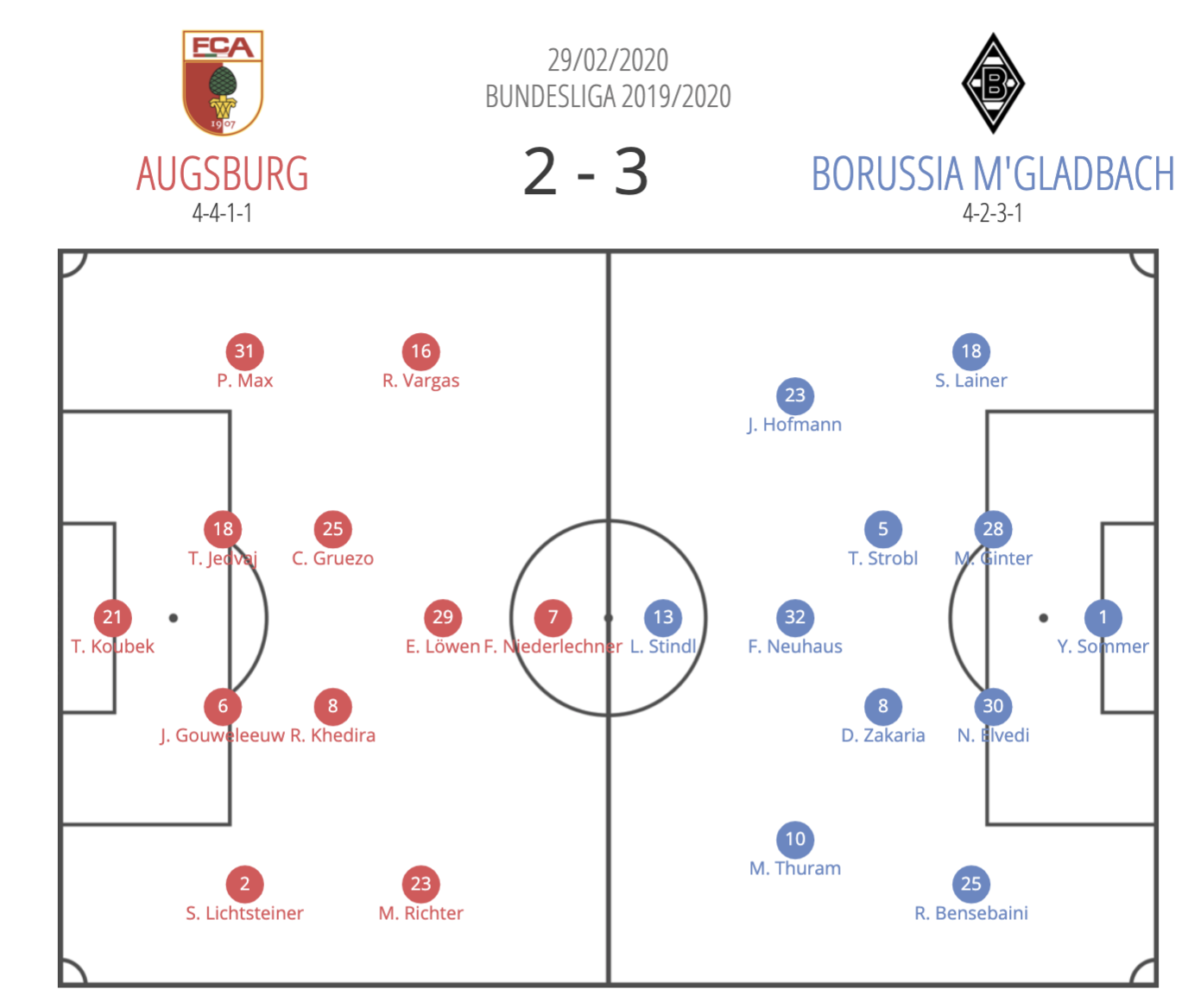 Marco Rose didn’t change too much to his line-up. The head coach used the same formation as in the draw against Hoffenheim last week. Despite that, Rose made some personal changes. The coach decided to start Ramy Bensebaini at left-back instead of Oscar Wendt. Furthermore, Alassane Pléa was left out of the starting eleven. Tobias Strobl started instead of the French striker.

As mentioned in the section above, Augsburg started the game in a 4-4-1-1 formation. However, on the pitch, the set-up looked more like a 4-4-2 formation. In this set-up, Augsburg tried to pressure Gladbach early on. The two strikers pressured the centre-backs when the ball was played to them, while the wingers focused on the full-backs.

In the picture beneath, we can see an analysis of how Augsburg pressured Mönchengladbach early on. In this picture, Gladbach’s goalkeeper Yann Sommer passed the ball to Nico Elvedi after he was pressed by Augsburg’s right striker. After that pass, the right striker made a recovery run to pressure Elvedi. Augsburg’s right midfielder Marco Richter focused on Gladbach’s left full-back. Because Borussia Mönchengladbach had two holding midfielders, Carlos Gruezo moved up a bit. Therefore, the set-up sometimes looked like a 4-4-2 diamond.

When Borussia Mönchengladbach played through Augsburg’s press, Schmidt’s side dropped back and positioned themselves at their half. From there, they tried to stop Gladbach from creating chances, again in a 4-4-2 set-up. The picture beneath shows how Augsburg applied these tactics. In this picture, the opposition had the ball around the midway line. The wide midfielders positioned themselves on the line of the two holding midfielders. Striking is that Augsburg’s two holding midfielders mainly focused on Gladbach’s defensive midfielders. The attacking midfielder was left free in the space between Augsburg’s midfield and defence.

After a few minutes, Gladbach started to recognise that Augsburg used two strikers to press their two centre-backs. Therefore, Mönchengladbach used a dropped-back midfielder to create a three versus two situation against Augsburg’s strikers. On those occasions, Strobl dropped back in between or beside his two centre-backs. The other holding midfielder positioned himself just in front of those three players.

Because of this adjustment, Augsburg started to hesitate in their pressing. As a result, the side varied in their pressing. Sometimes they used one striker, while other times they used two strikers again. Borussia Mönchengladbach recognized this and also had a solution to this problem. Whenever Augsburg pressed with two strikers, Strobl dropped back. During the moments Augsburg pressed with only one striker, Strobl stayed in midfield and let the centre-backs play a two versus one situation.

In the analysis beneath, we can see how Gladbach applied the second option. In this picture, Augsburg pressed with one striker. Therefore, Strobl positioned himself in midfield and let his centre-backs play a two versus one situation.

Schmidt’s side used a way of playing out from the back that was similar to the build-up used by Mönchengladbach after their adjustment. Gladbach used the same pressing tactics as they did in their last game against Hoffenheim. The attacking midfielder positioned himself beside the striker. These two players started pressing the two centre-backs whenever the ball was played to them.

Despite these interesting adjustments in the build-up from both sides, which were based on the way of pressing, the teams struggled to create chances. Augsburg had an xG value beneath 0.01, while Borussia Mönchengladbach had an xG value of 0.60. In other words, both sides had to change something.

Due to the lack of chances created in the first half, Rose decided to change his formation. Therefore, Borussia Mönchengladbach started the second half in a 3-4-2-1 set-up. This change in tactics not only allowed Gladbach to always create three versus two situations in their build-up but also allowed them to put more pressure on Augsburg’s backline.

In the picture beneath we can see that Gladbach lined-up differently in the second half. The wingers positioned themselves more in the centre of the pitch. This enabled them to put pressure on the centre-backs. The wide midfielders focused on Augsburg’s full-backs.

The formation change also changed the way Borussia Mönchengladbach pressed. In the picture above we already saw some of the aspects of this change in the pressing tactics. In the analysis beneath, we can see clearly how Gladbach wanted to press in the second half. Augsburg’s right centre-back had the ball and was pressed by Lars Stindl. At the same time, Bensebaini looked for the pass to Augsburg’s right full-back. When the ball was played, Gladbach’s wide midfielder started to press aggressively.

Spectacle due to the formation change

Due to this formation change, both sides created a lot more chances than they did in the first half. The first fifteen minutes of the second half was especially spectacular. Both sides were searching for ways to attack and defend due to the formation change, and as a result, a lot of chaos occurred on the pitch. Due to this chaos, three goals were scored in these fifteen minutes after the break.

The main reason for the increase in chances was that both sides could find their midfielders better than in the first half, especially Augsburg who struggled in their defensive organisation. The side hesitated in how to press Gladbach’s backline. As a result, it became easier to attack the opposition’s half. Furthermore, there were much more counter-attacks than in the first half, which also added to the spectacle of the game.

We can see the increase of chances in the xG values of both sides. In contrast to the first half where the side created less than 0.01 xG, Augsburg had some good chances and increased their xG value to 1.11. Borussia Mönchengladbach also created more and better chances (1.75 xG) than they did in the first half (0.60 xG).

Borussia Mönchengladbach got the win they deserved in the encounter with Augsburg as Rose’s side created the better chances while they also defended better. Rose’s switch of formation gave Gladbach some attacking impulses. However, due to the formation change, the side also gave more chances away.

Schmidt will also take some positives from the game against one of the title contenders. The team adjusted well to Gladbach’s way of pressing. Furthermore, the coach will be pleased with the defensive organization the team showed in the first half. The main improvements for Augsburg regard creating chances and reacting to a formation change from the opposition.